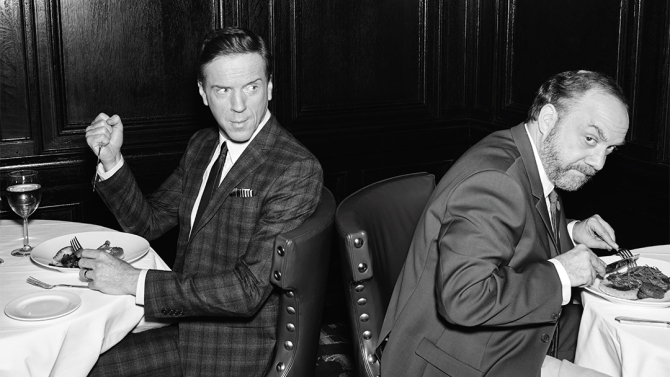 Michael Belkin called the 2000 market top. Now the publisher of the Belkin Report, an institutional newsletter on asset allocation, and the Belkin Gold Stock Report is waving a warning flag about the level of margin debt on the New York Stock Exchange.

Margin debt is the loans banks and brokerages make to investors, using their stock- and bond-holdings as collateral. In November, it neared an all-time high of $507 billion and has hovered close to that level since. “It’s something that’s hanging over the market,” he says. “The market is addicted to debt.”

There’s precedent for a high level of margin debt foreshadowing a market collapse. It peaked in March 2000, congruent with the market’s March 24 top and subsequent 49% decline. And it peaked again in July 2007, a few months before the market top in October. Another disturbing factor: The percentage rise in margin debt over the latest bull market is 193%, exactly the increase from 2002 to 2007, when the financial crisis began and the Standard & Poor’s 500 index later fell 57%.

The problem with margin debt is that it causes a cascade effect. As the market falls, investors get margin calls on their loans and have to sell stocks to maintain their margin-debt minimum.

The NYSE has released new data for margin debt, now available through December. The latest debt level is down 2.2% month-over-month. The current level is 3.5% below its record high set in April 2015. The December data gives us an additional sense of investor behavior during the election rally. 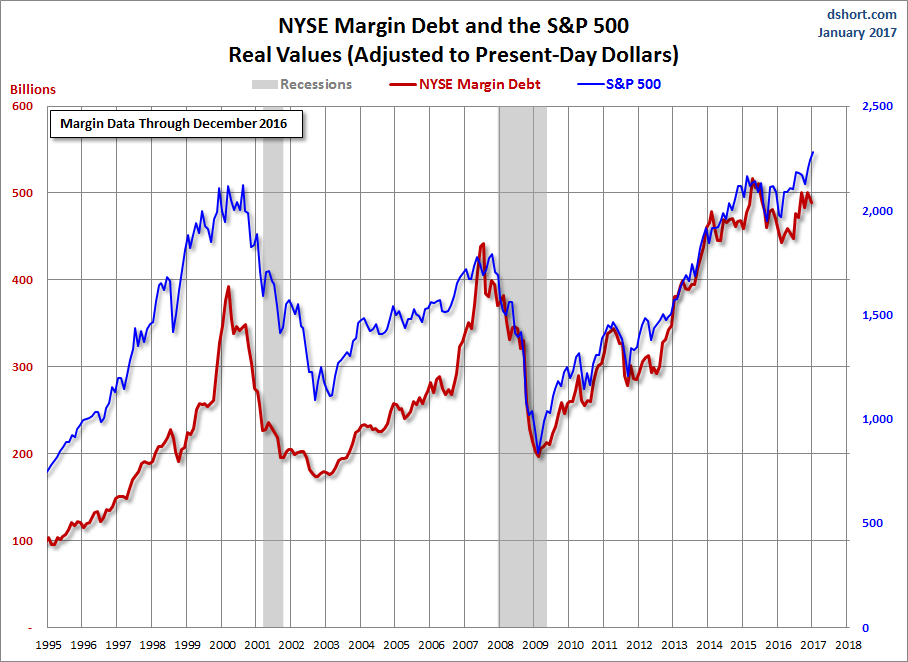 END_OF_DOCUMENT_TOKEN_TO_BE_REPLACED

It looks like investors are buying expensive markets and selling cheap markets again. In my August post “Gimme Shelter,” I pointed out that money was flowing into an expensive fixed income market and out of a reasonably priced equity market. At the time, I observed that recency bias and negativity bias were leading investors to shift money “under the mattress” into traditionally safe bonds or cash. I cited a Wall Street Journal article reporting that investor demand for bond funds relative to stocks was at the highest level on record. According to the article, investors had poured $202 billion into global bond funds and withdrawn $57 billion from stocks. In just the U.S., China and Japan alone, a stunning $55 trillion was sitting idle in bank deposit accounts that were yielding essentially zero interest. “Never before in history have individual investors been so bearish on stocks when the stock market is at a record high,” I wrote. 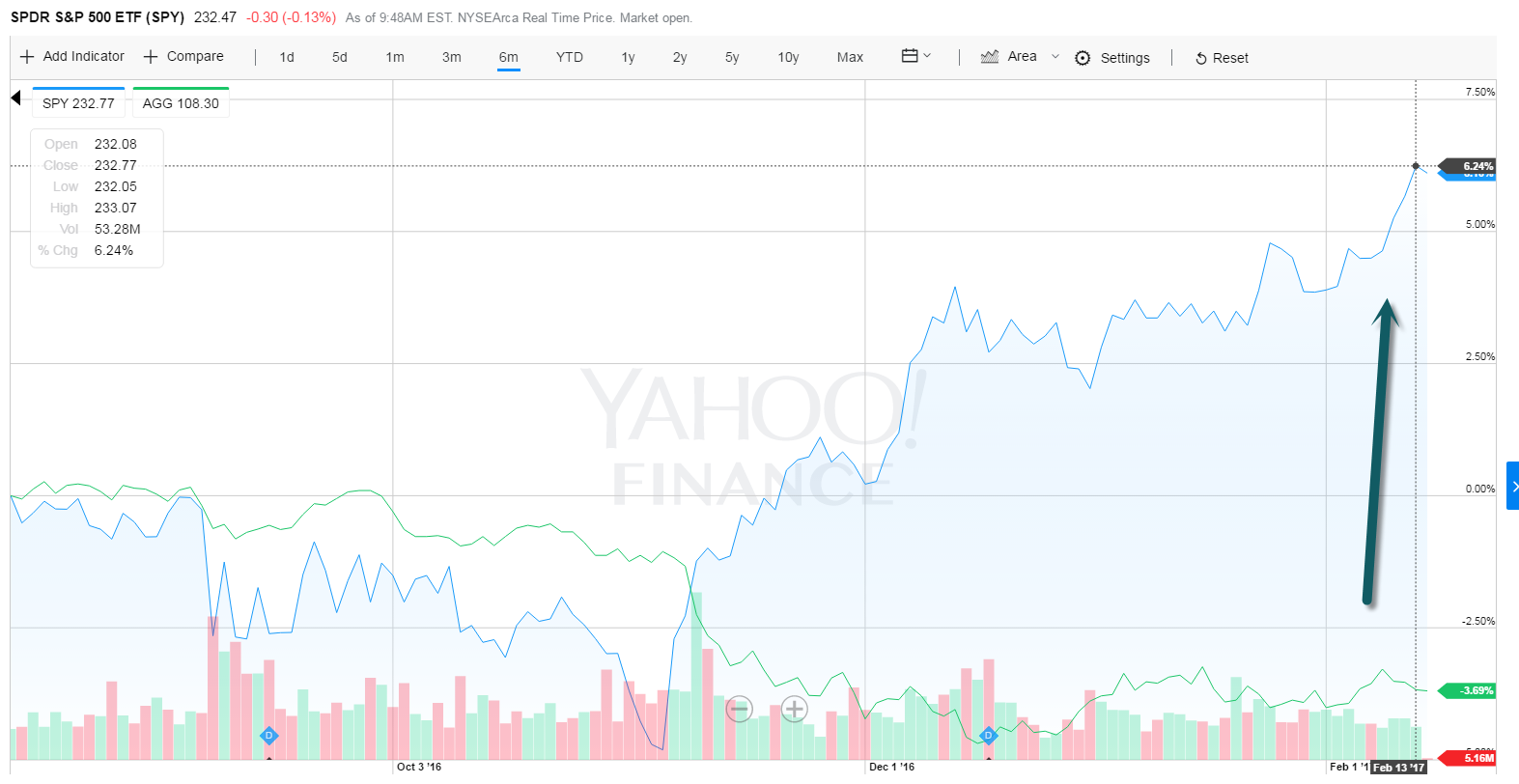 END_OF_DOCUMENT_TOKEN_TO_BE_REPLACED

1.Freddie Mac…2008 Implosion Leader is Up from the Ashes. 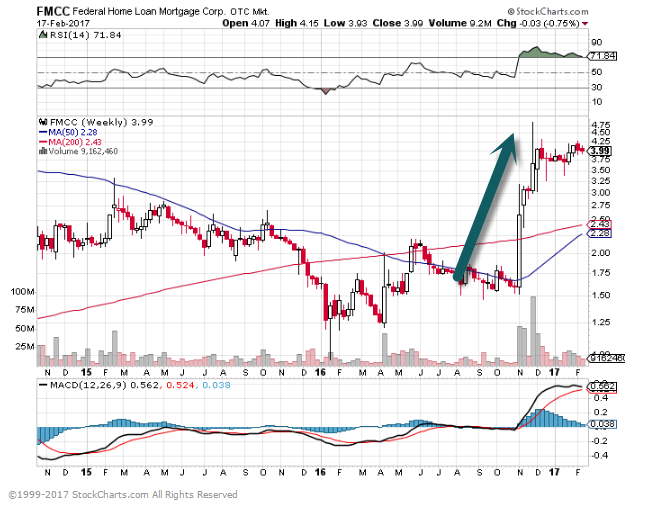 END_OF_DOCUMENT_TOKEN_TO_BE_REPLACED

Yield Spread and Risk
Typically, the higher risk a bond or asset class carries, the higher its yield spread. When an investment is viewed as low-risk, investors do not require a large yield for tying up their cash. However, if an investment is viewed as higher risk, investors demand adequate compensation through a higher yield spread in exchange for taking on the risk of their principal declining. For example, a bond issued by a large, financially healthy company typically trades at a relatively low spread in relation to U.S. Treasuries. In contrast, a bond issued by a smaller company with weaker financial strength typically trades at a higher spread relative to Treasuries. For this reason, bonds in emerging markets and developed markets, as well as similar securities with different maturities, typically trade at significantly different yields.
Read more: Yield Spread Definition | Investopedia http://www.investopedia.com/terms/y/yieldspread.asp#ixzz4YeksCSSR 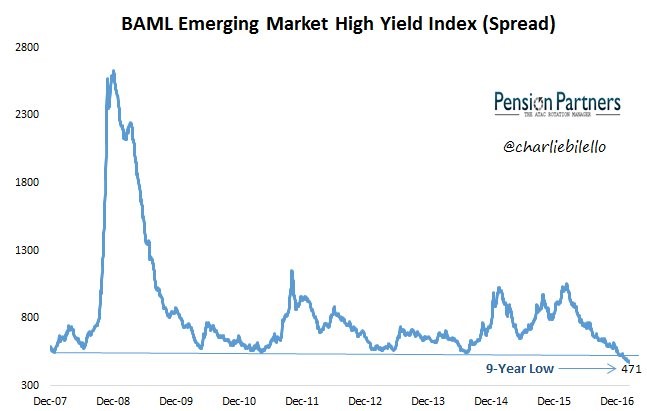 Am I the Only One Nervous?

END_OF_DOCUMENT_TOKEN_TO_BE_REPLACED 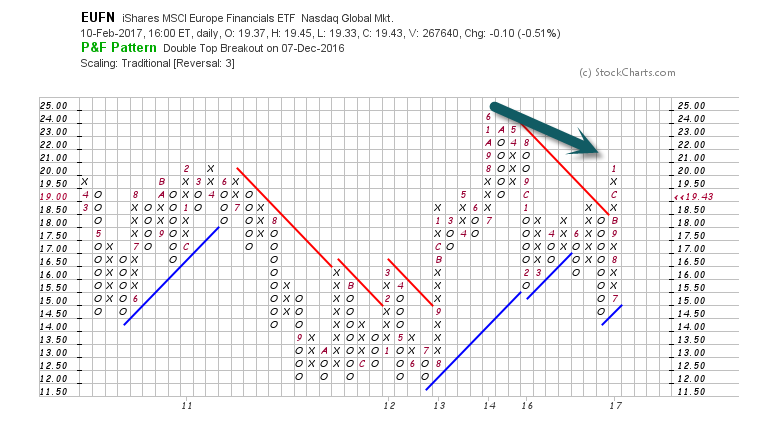 The index measures the stock performance of up to 700 emerging market companies, excluding companies domiciled in China and Hong Kong. Companies are selected and weighted according to free-float market capitalization. 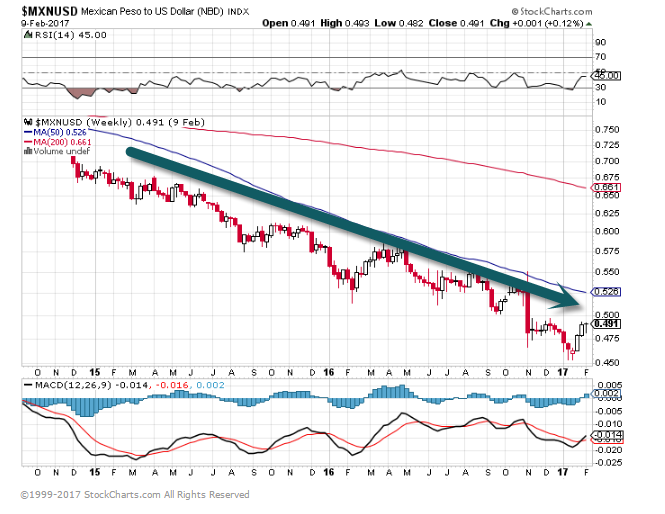 For some perspective on a key US stock market index, today’s chart illustrates the overall trend of the tech-laden Nasdaq Composite since 2000. As today’s chart illustrates, the Nasdaq’s seven-year post-financial crisis rally is still very much intact. While other major indices have pulled back slightly (though still trade near historic highs — the Dow just closed above 20,000 and the S&P 500 is closing in on 2,300) the Nasdaq continues to post all-time record highs and, today, did so once again.