Top 10 will be off and on this week due to travel. 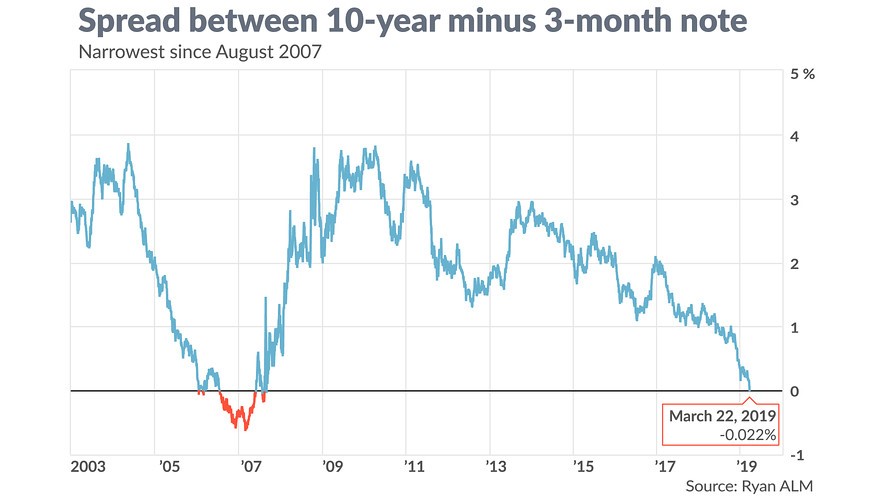 A closely watched measure of the yield curve briefly inverted Friday — with the yield on the 10-year Treasury note falling below the yield on the 3-month T-bill — and rattled the stock market by underlining investor worries over a potential recession.

But while that particular measure is indeed a reliable recession indicator, investors may be pushing the panic button prematurely. Here’s a look at what happened and what it might mean for financial markets.

The yield curve is a line plotting out yields across maturities. Typically, it slopes upward, with investors demanding more compensation to hold a note or bond for a longer period given the risk of inflation and other uncertainties. An inverted curve can be a source of concern for a variety of reasons: short-term rates could be running high because overly tight monetary policy is slowing the economy, or it could be that investor worries about future economic growth are stoking demand for safe, long-term Treasurys, pushing down long-term rates, note economists at the San Francisco Fed, who have led research into the relationship between the curve and the economy.

They noted in an August research paper that, historically, the causation “may have well gone both ways” and that “great caution is therefore warranted in interpreting the predictive evidence.”

The yield curve has been flattening for some time. On Friday, a global bond rally in the wake of weak eurozone economic data pulled down yields. The 10-year Treasury note yield TMUBMUSD10Y, +0.00%  fell as low as 2.42% and remains off nearly 9 basis points at 2.45%, falling below the three-month T-bill yield at 2.455%.

Why does it matter?

The 3-month/10-year version that is the most reliable signal of future recession, according to researchers at the San Francisco Fed. Inversions of that spread have preceded each of the past seven recessions, including the 2007-2009 contraction, according to the Cleveland Fed. They say it’s offered only two false positives — an inversion in late 1966 and a “very flat” curve in late 1998.

A recession isn’t a certainty. Some economists have argued that the aftermath of quantitative easing measures that saw global central banks snap up government bonds may have robbed inversions of their reliability as a predictor. Since so many Treasurys are held by central banks, the yield can no longer be seen as market-driven, economist Ryan Sweet of Moody’s Analytics, recently told MarketWatch’s Rex Nutting.

Meanwhile, recessions in the past have typically came around a year after an inversion occurred. Data from Bianco Research shows that the 3-month/10-year curve has inverted for 10 straight days six or more times in the last 50 years, with a recession following, on average, 311 days later

Per @biancoresearch the 10-year/3-month curve has inverted for 10 consecutive days or more 6 times in the last 50 years. On each of those occasions a recession has followed (on average 311 days later). 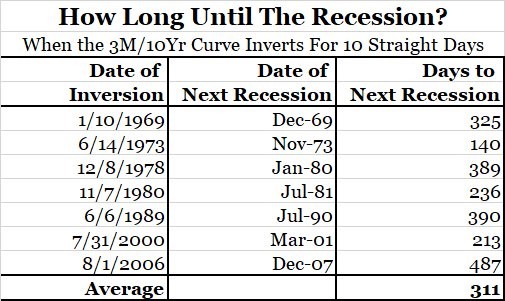 Here are the start dates for the five previous inverted yield curves along with the beginning of the ensuing recessions:

There has been a substantial lag from the time of the inversion until the start of the recession in each of these instances. The average number of months was 17, meaning it took about a year and a half for the economic slowdown to hit after the inverted yield curve. We can also look at the stock market’s performance in this lag period to see how the S&P 500 has performed after the yield curve inverted but before the start of the next recession:

The average return in these periods was a gain of more than 15 percent; there was just one downturn, which occurred after the dot-com bust in the early 2000s. Although the stock market doesn’t need to see a recession for a large correction, it’s a safe bet that an economic contraction will lead to a drawdown in stocks.

The old joke is that the stock market has predicted nine of the last five recessions, but stocks have actually gone into correction, and even bear market territory, far more quickly than the economy has sunk into a recession following an inverted yield curve. This table shows that every one of the five times since the mid-1970s that long rates have fallen below short rates, the S&P 500 has experienced a double-digit drawdown:

The timing of these market corrections varies widely. In late 1980 and early 2000, the inverted yield curve signaled a quickly approaching stock market peak. In the other three instances, it was almost two years until stocks broke down.

These types of relationships are never written in stone, but you can see why investors and economists alike are wary of the possibility of an inverted yield curve. If history is any indication, the two- to 10-year spread is worth watching for both an economic and stock market downturn.

Originally published on Bloomberg View in 2017. Reprinted with permission. The opinions expressed are those of the author.

Looking ahead. This isn’t automatically a sign of doom. Past recessions have been preceded by a yield-curve inversion for 10 days straight, and this is only Day One, as Bianco Research points out. The inversion will matter less if the 10-year yield rises back above the three-month yield next week.

Of course, that average includes a range of 140 to 487 days. So while a 10-day inversion is probably a sign of trouble ahead, it isn’t very helpful for timing the market.

The Yield Curve Just Inverted. That’s Not as Scary as You Think. Alexandra Scaggs

3.Growth in Treasury Holdings at Banks.

Banks have in recent years increased their holdings of Treasuries and mortgages, see chart below and here. 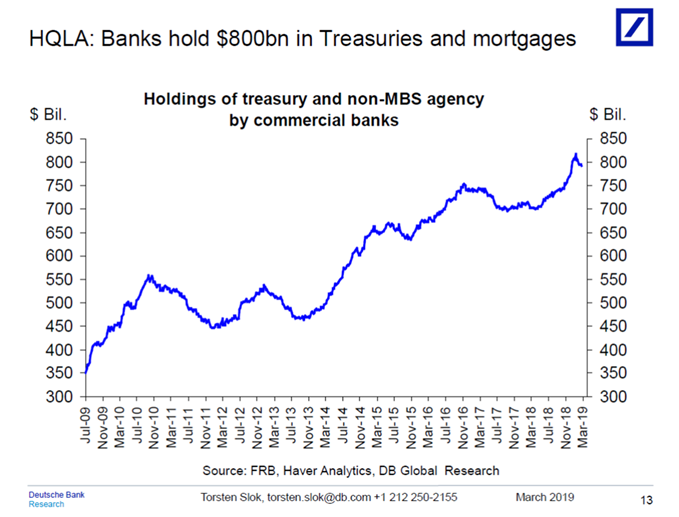 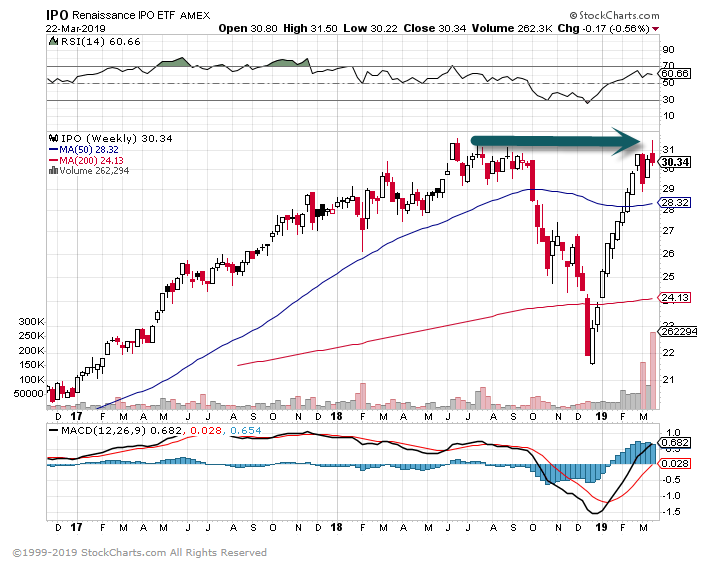 5.One Group That Made New Highs…REITs 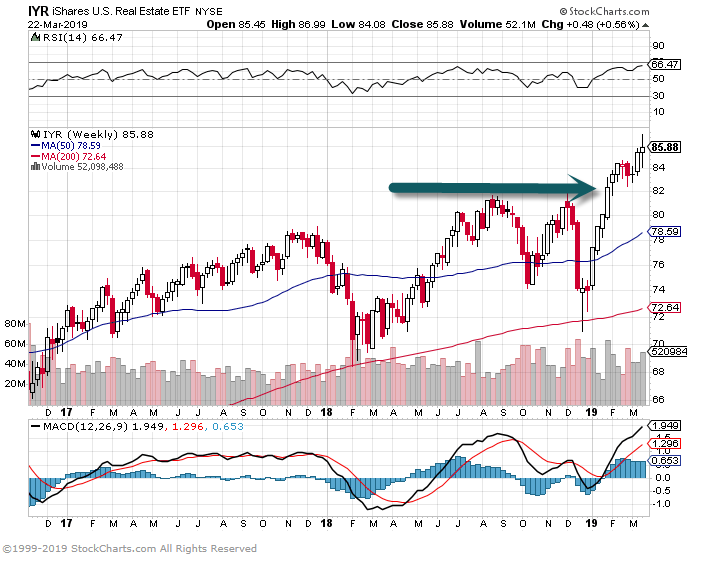 Still, the future for private equity might not be as lucrative as the past, with money gushing in and with buyouts priced near their highest levels in the past decade and a half.

“Now, when everyone else is doing it and with [the prices of buyout deals] higher, expected returns look just okay,” says Steven Kaplan, a finance professor at the University of Chicago Booth School of Business. 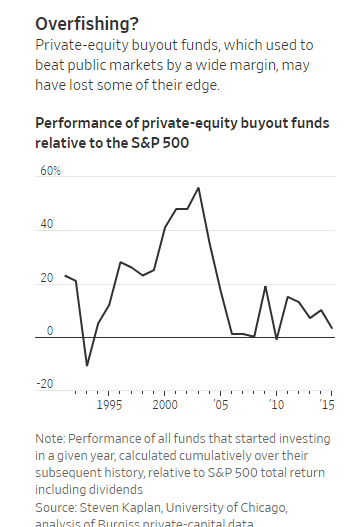 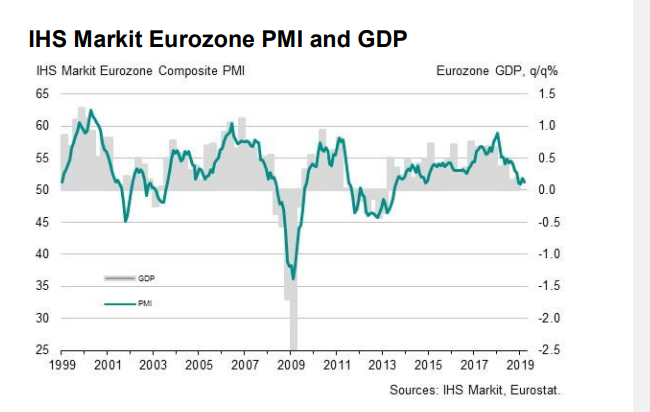 8.100 Year Low in Valuations of Commodities vs. Stocks. 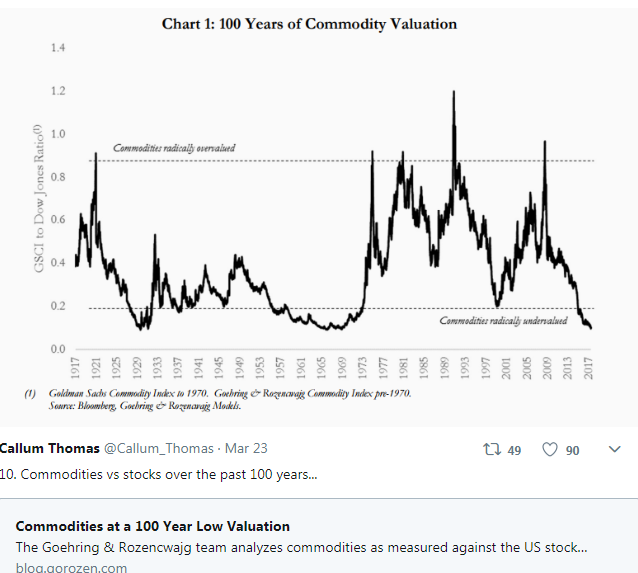 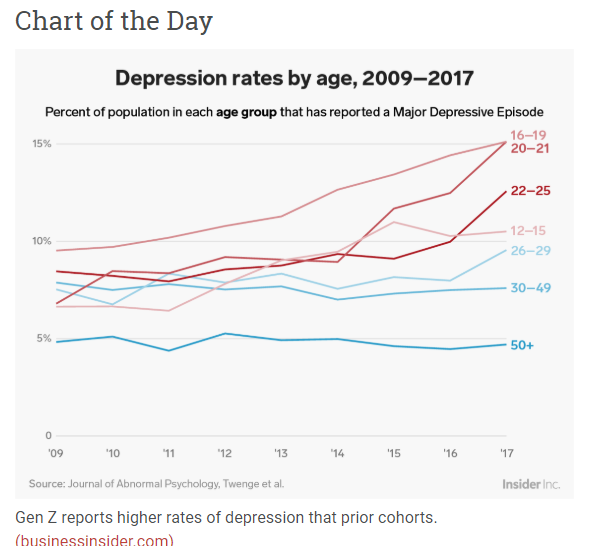 10.The 1 Interview Question That Reveals Almost Everything You Need to Know to Find the Perfect Job Candidate

That approach is certainly valid. Yet it’s hard to strike up a great conversation — because the best job interviews are conversations — when you ask a canned series of scripted questions. Do that, and the process feels more like an interrogation.

And where an interrogation is concerned, there is no winner.

So try this instead. Once you’ve gotten past the small talk, ask one good, compelling question that for great candidates will spark telling conversations:

“What skill you possess that will most impact our bottom line?”

Why? You immediately learn whether the candidate knows anything about your company. (It’s hard to say how you will impact the bottom line when you don’t understand what truly drives value for a company.)

More importantly, you begin to get to the heart of the value the employee will provide… and whether his or her strengths truly meet your needs.

Ask, Listen, and Have a Conversation

Simply think about what you just heard.

Then ask a question you would ask if you had run into the candidate in an airport lounge.

Granted, you may be thinking, “That approach could work if the opening is sales, or operations, or a functional area with direct, bottom-line responsibility. But what about support functions?” No problem.

Say you’re interviewing a candidate for an HR role. Here’s how it could go:

You ask, “What skill do you possess that will most impact our bottom line?”

Saying I’ll comply with regulations is like saying, “I’ll come to work every day.”

And maybe that’s OK. Maybe avoiding legal issues is all you care about.

Which is why the candidate might instead say, “I’m extremely good at working with department heads to determine the unique skills and talents they need. That way I can find not just qualified candidates, but exceptional candidates.”

And Ask for Examples

Hmm. You like the sound of that. And you like the fact she thinks about her job not just as a series of boxes to check… but one that has a broad impact on your business. But then again, that answer could just be a platitude. What does her answer look like in practice?

So you say, “Give me an example,” because it’s a natural question when you’re having a conversation. (And it’s a question candidates with experience andachievements love to answer.)

“A department manager gave me a list of qualifications for an engineering manager position,” she might say. “He said the right candidate needed a degree from a top-five school and at least ten years experience in managing projects. I asked what he needed the person to actually do, and after some discussion he boiled the job down to developing and releasing successful products. What he really needed was a person who had actually brought a number of products to market — where that person went to school, or whether they had 10 years experience, was irrelevant.”

You like the sound of that, too. But there’s a natural question you can ask: “Still, isn’t it easier to give people what they ask for? Then it’s their problem if the person selected doesn’t work out, not yours.”

Maybe she has the right answer. Maybe she’ll say it’s everyone’s problem if you don’t find the perfect candidate. Maybe she’ll say she’s good at working with people so they understand she’s only trying to give them what they really need, and isn’t pushing back just to push back.

And maybe you’ll say, “Hmm. But what happens when department managers feel you’re trying to give them what you want instead of what they need. Has that ever happened to you?” (Yet another natural question.)

And the conversation continues.

How to Craft Your Question

First, think about what you truly need: Hard skills, soft skills, leadership skills. Don’t think about the perfect candidate’s qualifications but what the perfect person in the job will actually do.

Because after all, you don’t hire titles; as Dharmesh Shah, the co-founder of HubSpot, says, “You need a doer of stuff that needs to get done.”

Then think of one question that can form the basis for a thoughtful conversation. You can use mine. Or you can use one of yours:

The goal is to craft a question that serves as the trunk of a huge conversational tree and allows you to branch off in a number of different directions.

Then put away your scripted questions… and have that conversation.

You’ll learn a lot more than you would by following a canned interview guide, because the most revealing answers are always to follow-up questions.

Listen. Then ask how. Or why. Or how a situation turned out. Or who actually did what. Or what made a success difficult to achieve, or what was learned from a failure.

Because it feels a lot more natural — and a lot more like a conversation — you’ll enjoy the interview more.

And so will great candidates, because they will be able to relax, get into a conversational flow… and as a result, give you their best.

Which is exactly what a great interviewer wants.