1.Energy Pricing in a Strong Recovery?

Yet, the valuation has been inflated by a collapse in profits for oil companies. Because analysts expect little in the way of earnings over the next year, but a recovery later, the ratio of price to year-ahead earnings for oil stocks is elevated. The energy sector stands at more than 30 times Thomson Reuters IBES’s estimate of operating earnings over the next 12 months, higher than any time from when the sector data started in 1995 up to last year—when it briefly reached an extreme of almost 60 times. 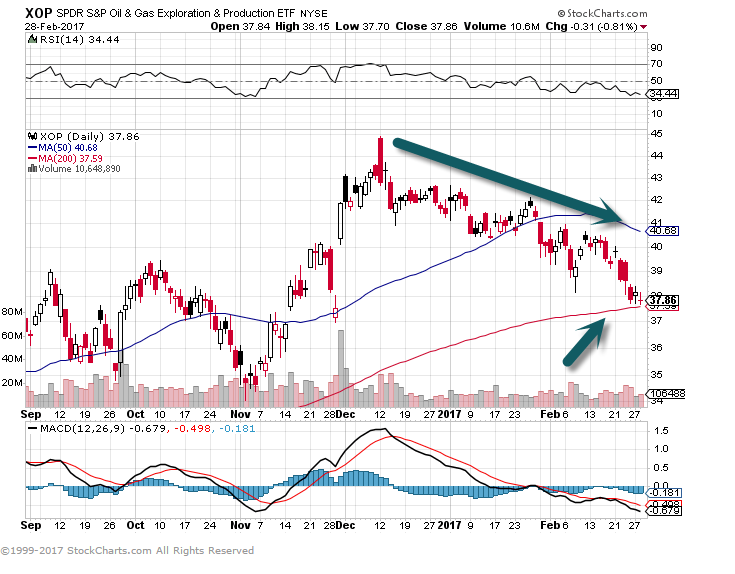 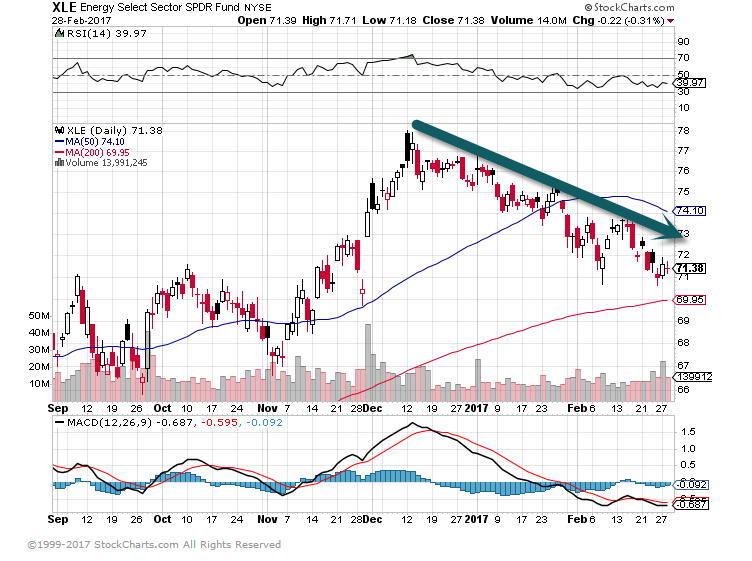 2.Second Most Expensive Sector in Market After Energy=Consumer Staples. This Sleepy Defensive in 2015 Goes on Colossal Run from $16.50 to $56 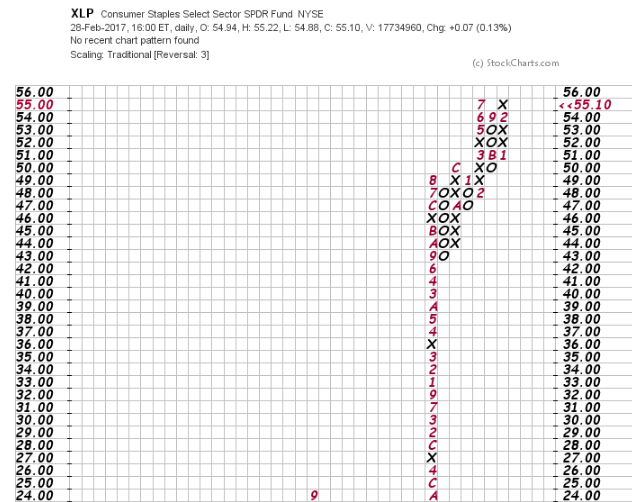 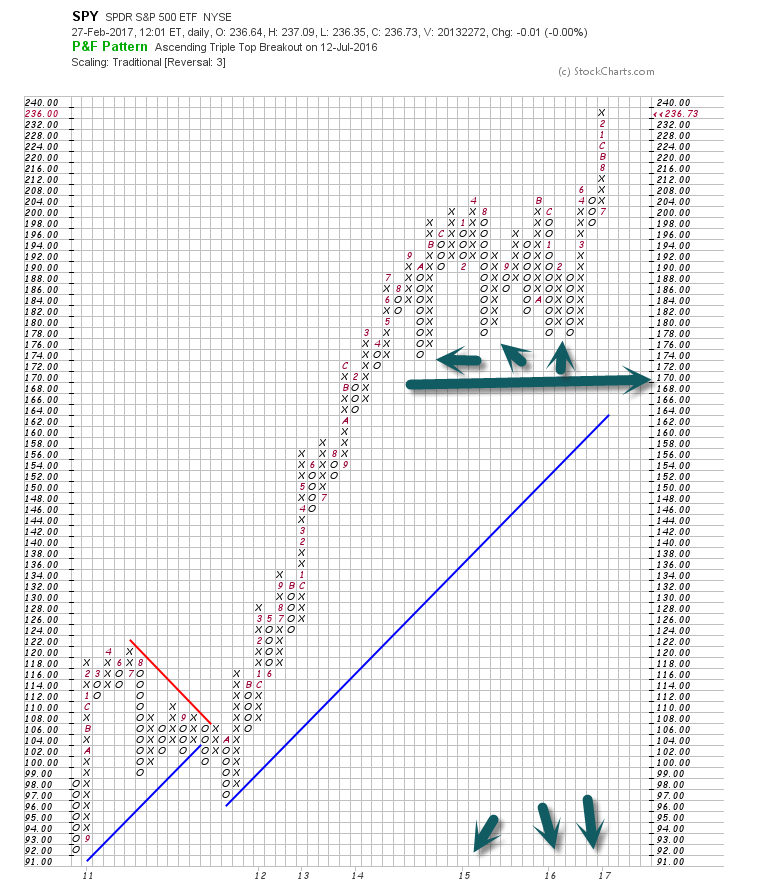 4.Here Comes Retail ….Investor Buying has been Tepid and Inconsistent in this Hated Bull Market…..2017-Positive Retail Flow 86% of Days.

From Phil MacKintosh at KCG 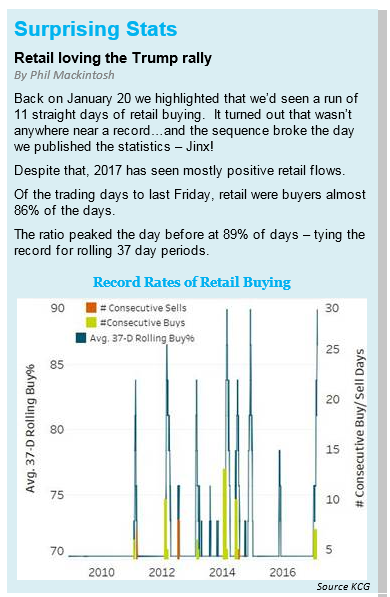 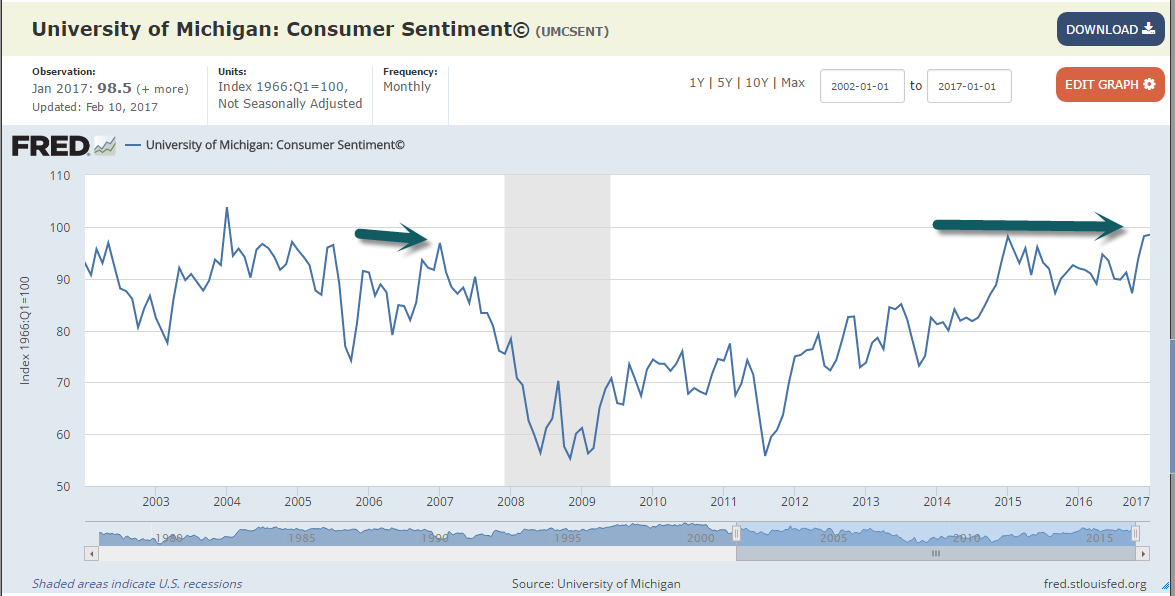 6.Last 50 Trading Days Has Reached the Narrowest Ranger Ever.

Feb 28, 2017
In a post on Monday, we noted that the average intraday range for the S&P 500 over the last 50 trading days had reached its second narrowest level on record, and that if the S&P 500 did not trade in a range of more than 1% on Tuesday that it would be the narrowest average range in a 50-trading day period on record. Well, in Tuesday’s trading the S&P 500’s intraday range came in at just 0.37%, pushing the 50-day average intraday high/low range down to 0.523%, which is the lowest level since at least 1983 when our historical database begins. 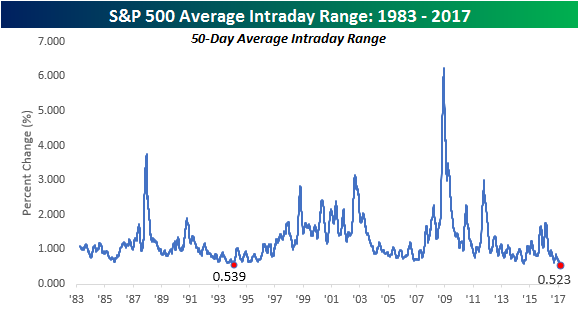 Tuesday, also marked the 50th straight trading day that the S&P 500 went without an intraday trading range of 1% or more. The chart below shows streaks where the index went without a 1% intraday range, and the current streak is far and away the longest on record since at least 1983 (when our data begins). Now, that’s a lack of volatility! 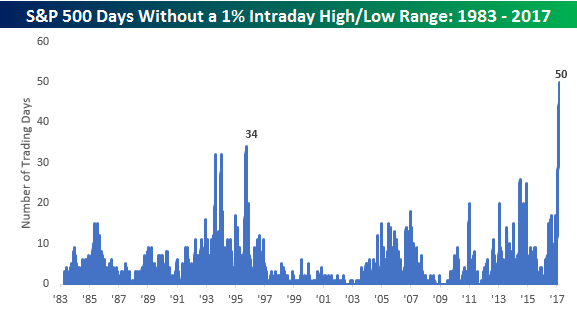 Trump May Feel “Urgent” to Copy Reagan, but It’s a Much Different World 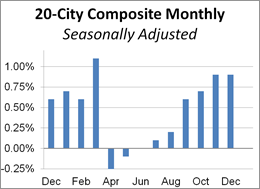 The adjacent column chart illustrates the month-over-month change in the seasonally adjusted 20-city index, which tends to be the most closely watched of the Case-Shiller series. It was up 0.9% from the previous month. The nonseasonally adjusted index was up 5.6% year-over-year.
Investing.com had forecast a 0.7% MoM seasonally adjusted increase and 5.3% YoY nonseasonally adjusted for the 20-city series.
Here is an excerpt of the analysis from today’s Standard & Poor’s press release.
“Home prices continue to advance, with the national average rising faster than at any time in the last two-and-a-half years,” says David M. Blitzer, Managing Director and Chairman of the Index Committee at S&P Dow Jones Indices. “With all 20 cities seeing prices rise over the last year, questions about whether this is a normal housing market or if prices could be heading for a fall are natural. In comparing current home price movements to history, it is necessary to adjust for inflation. Consumer prices are higher today than 20 or 30 years ago, while the inflation rate is lower. Looking at real or inflationadjusted home prices based on the S&P CoreLogic Case-Shiller National Index and the Consumer Price Index, the annual increase in home prices is currently 3.8%. Since 1975, the average pace is 1.3%; about two-thirds of the time, the rate is between -4% and +7%. Home prices are rising, but the speed is not alarming.” [Link to source] 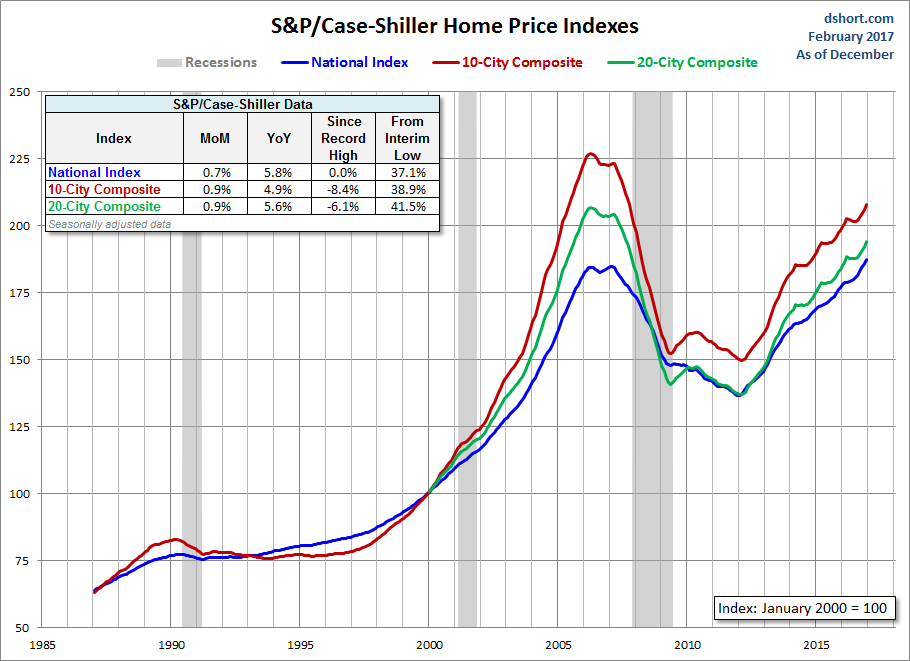 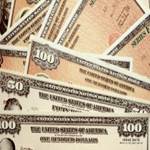 For those of you who have been in this business for a decade or longer, how much more efficient is your business today than it was when you began? I suspect that the answer to that question is “much more efficient.” Why? Because those advisors who failed to innovate and streamline their business are likely already on to a different career. We are all aware of just how much competition there is in this industry and have seen the general trend in lower fees and increased automation. Yet, in my humble opinion, there is still no better place to be. In fact, for the advisor who is on the right side of these trends, who continues to find ways to operate more efficiently, and continues to increase their value proposition to their clients, the future is as bright as ever.
While recently reading Martin Ford’s book Rise Of The Robots, I came across the following passage which speaks to the pace of innovation and ever-increasing efficiency in our economy.
In 1988, workers in the US business sector put in a total of 194 billion hours of labor. A decade and a half later, in 2013, the value of the goods and services produced by American businesses had grown by about $3.5 trillion after adjusting for inflation—a 42 percent increase in output. The total amount of human labor required to accomplish that was…194 billion hours. Shawn Sprague, the BLS economist who prepared the report, noted that “this means that there was ultimately no growth at all in the number of hours worked over this 15-year period, despite the fact that the US population gained over 40 million people during that time, and despite the fact that there were thousands of new businesses established during that time.” (Shawn Sprague, “What Can Labor Productivity Tell Us About the U.S. Economy?,” US Bureau of Labor Statistics, Beyond the Numbers 3, no. 12 (May 2014)
Kind of amazing, isn’t it? 42% more output with the same amount of human labor. As you look at your business today, what parts need to become more efficient? Marketing, reporting, compliance, investment management, customer service, client onboarding? Perhaps, a little of all the above? While we don’t profess to be all things to all people here at Dorsey Wright, we can make a major impact on your investment management process.
From Dorsey Wright
www.dorseywright.com

The leading work on this issue was done by Larry Mishel at the Economic Policy Institute. His April 2012 paper, The Wedges Between Productivity And Median Compensation Growth is the seminal work on this issue. Here’s an updated chart showing the disparity between wages and productivity. For a discussion of the productivity measurement, see this 2014 Bureau of Labor Statistics paper. It’s important to note that Mishel is using the median wage growth for production/non-supervisory workers, not total labor compensation. With this statistic, we look at the actual experience of approximately 80% of workers.
According to Mishel, the gap in the chart from 2000 to 2011 is the result of three factors (see Table 1):
1. Income inequality increased, with the great gains going to the top few percentiles and the rest stagnant or falling, accounting for 39% of the gap.
2. Income shifted from labor to capital, accounting for 45% of the gap.
3. Output prices diverged from consumer prices, accounting for 16% of the gap. 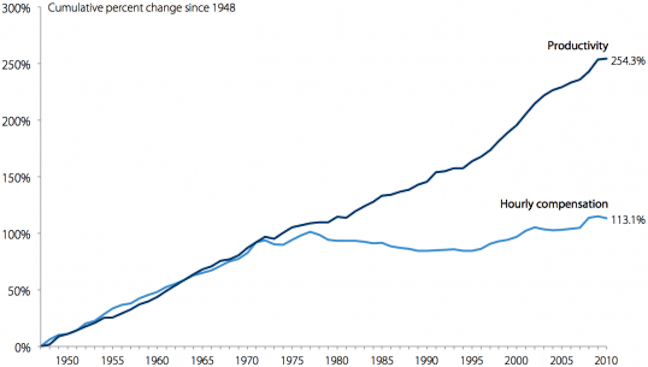 10.Employees Naturally Trust Leaders That Display These 3 Powerful Habits
Who wouldn’t want to work for a boss like this?

The opinions expressed here by Inc.com columnists are their own, not those of Inc.com.
http://www.inc.com/marcel-schwantes/employees-naturally-trust-leaders-that-display-these-3-powerful-habits.html?cid=email