You’re not shy, you get around You want to fly, don’t want your feet on the ground You stay up, you won’t come down You want to live, you want to move to the sound Got fire in your veins, burning hot, but you don’t feel the pain Your desire is insane, you can’t stop until you do it again

It is neither my job nor my desire to comment on politics and elections. But, with our President- elect’s proposed policies being compared to Ronald Reagan’s, I feel the need to step up. As a financial and investment commentator, I thought it would be important to reflect upon the backdrop of Reagan’s America (1981) versus President-elect Donald Trump’s America today. This is not an opinion piece about whether or not Trump’s policies will work–I always root for America no matter which political party is in office. Whether or not I agree with Presidential policy rates is far less important than being a patriot who believes that America will thrive based on our underlying principles. It shouldn’t matter which party is in charge.

The world economic backdrop that Trump is walking into looks vastly different than the one Reagan inherited. Here we’ll discuss the many differences between 1981 and 2017 in terms of U.S. military spending, stock market valuation, interest rates, globalization and immigration.

When many people think of Reagan, the first thing that comes to mind is his legendary “tear down these walls ” speech and the collapse of the Soviet empire. Some would say the Soviet collapse was accelerated by Reagan’s military buildup, including the Star Wars program. But, remember, Reagan stepped into office during a post-Vietnam military drawdown that began with the Carter administration. By the time Reagan completed his second term, he had expanded the U.S. military budget by a staggering 43 percent over what the country had spent during the height of the Vietnam War!

Today, coming out of the post-9/11 war on terror, it’s a very different story. President Bush II ramped up military spending to $700 billion from $400 billion during his term and it was not until President Obama’s second term that we started to see a decline in military spending. Now it looks we’re going the other way (again). Trump wants more military personnel, more ships, more aircraft and enough Marines to fight two wars. But, he wants the money to come from “cuts in waste.”  When it comes to government spending, cutting waste is much easier said than done.

Now let’s  take a look at the financial markets of three decades ago compared to today.

In 1981, Reagan’s inaugural year in office, the price-to-earnings (P/E) ratio of the S&P 500 Index was a historically low 9. By contrast, the market’s P/E ratio is about 26 today. Reagan entered office during the final phase of a secular bear market that began in 1966. By August 1982, the Dow had closed at its secular low of 776. Following a 1981-1982 recession, Reagan’s economy grew at a real rate of 16 percent. Compare that to today when real U.S. growth is plodding along at a paltry 2 percent almost a decade after the Great Recession. 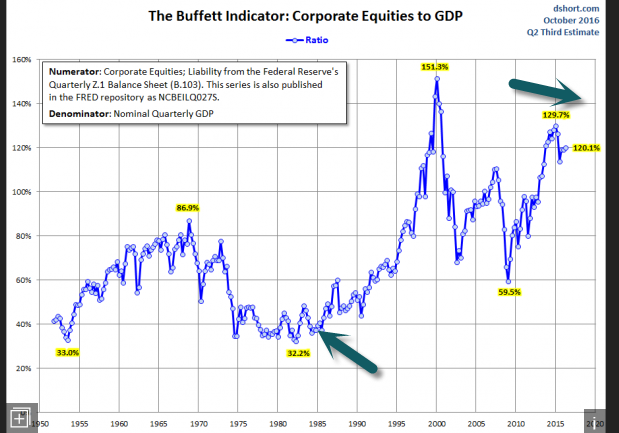 When Reagan was elected, we were coming out of the 1970s when interest rates were a sky-high 20 percent and the big hammer Paul Volcker  was just running out of ammo on the upside. Fast forward to today with rates bottoming near 2 percent. This is especially important because the overall debt in the U.S. economy was on a 30 year downtrend since the end of World War II when Reagan took office. 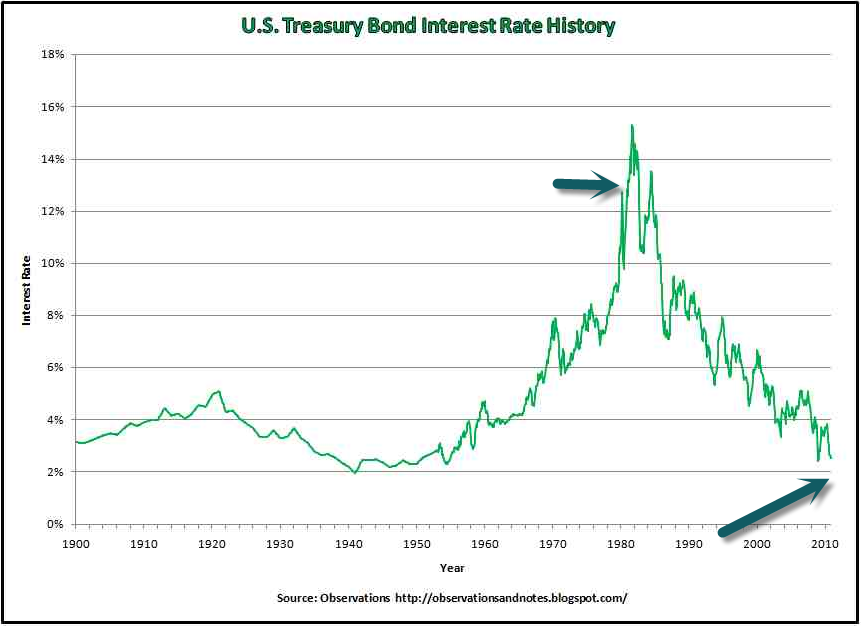 Debt as a portion of the U.S. economy: Reagan vs. Trump

According to Stephanie Pomboy of Macromavens, non-financial obligations now total 251 percent of our nation’s GDP. Compare that to a level of just 135 percent when Reagan came to office with $2 trillion of corporate debt coming due in the next two years . National debt in the chart below is over 100 percent of U.S. economy compared to 35 percent when Reagan kicked off his tax cuts. 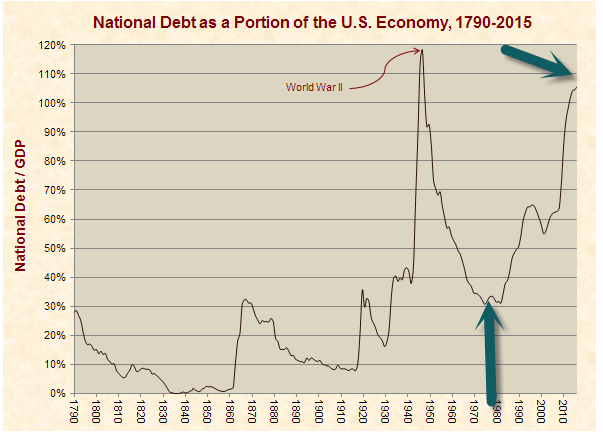 Immigration and the U.S. workforce.

Reagan took office at the end of an 80 year sideways move in immigration, while Trump takes over during a 25-year boom in foreign workers coming to our country. This boom means different things to different social classes. To some, the boom is a positive driver in terms of more educated talent, entrerprenurship and low-cost labor all in one. To others, the boom means competition for American jobs needed by our own long-time citizens. Reagan didn’t even have the immigration debate on his economic plate while Trump made it a key focus of his campaign. 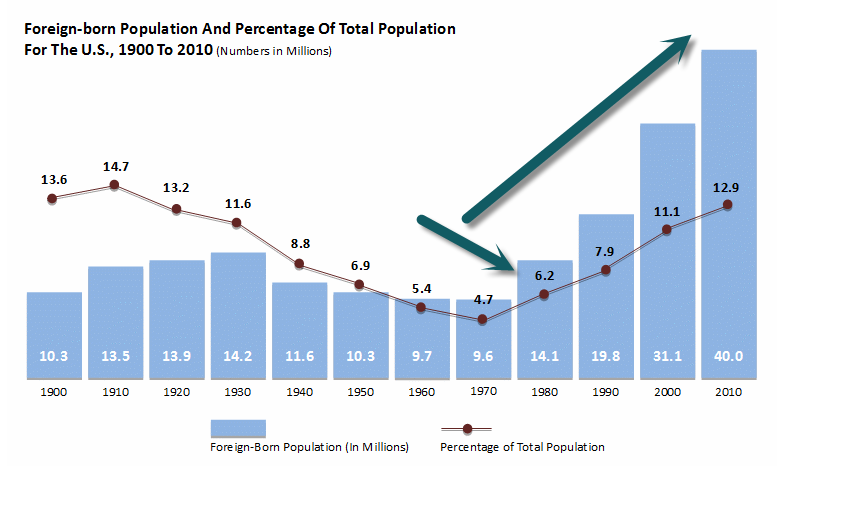 Although both Trump and Reagan have burning hot fire in their veins for change , the economies they inherited have different urgencies. The major economic factors such as debt, interest rates and stock market valuations the two Presidents faced are not just different, they are polar opposites. It could be argued that Reagan kicked off globalization, but Trump is now dealing with a world economy that has added over a one billion people to the workforce, thus driving down wages and upending job safety in developed countries like the U.S. Again, I root for whoever is President to enact postive change for our country, but the economic canvas you start with is not blank. If Trump’s goal is to paint an economic masterpiece, then his vision will have to look very different from Reagans.