1.Start with Another Gundlach Chart…Equities vs. Commodities. 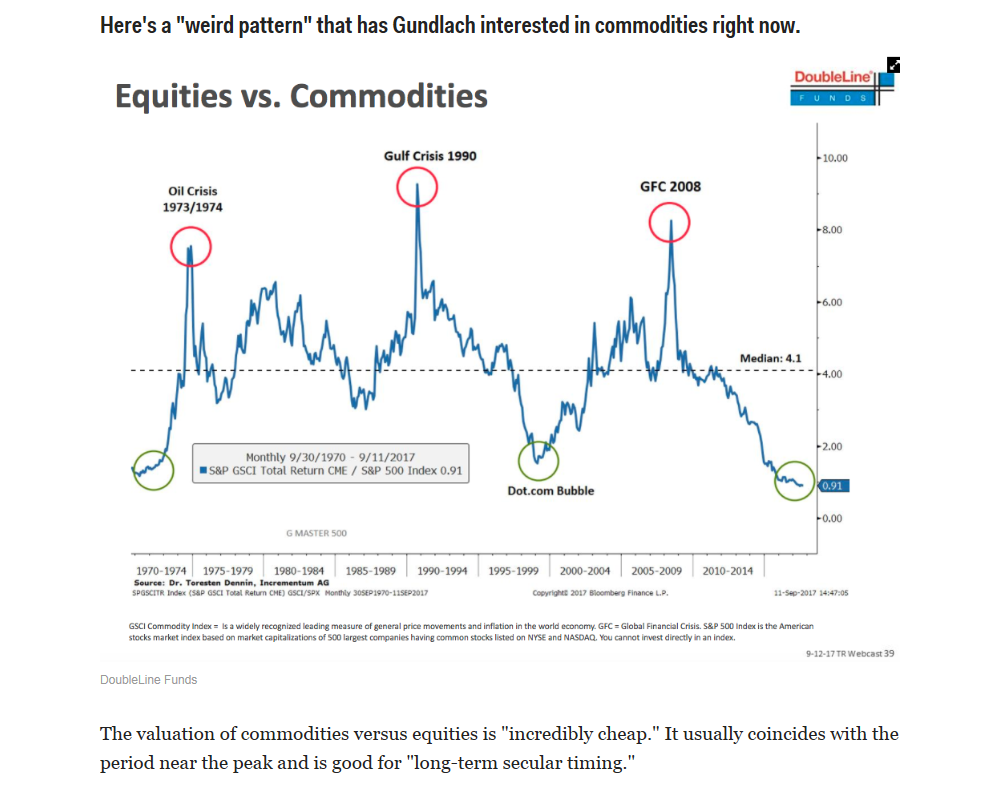 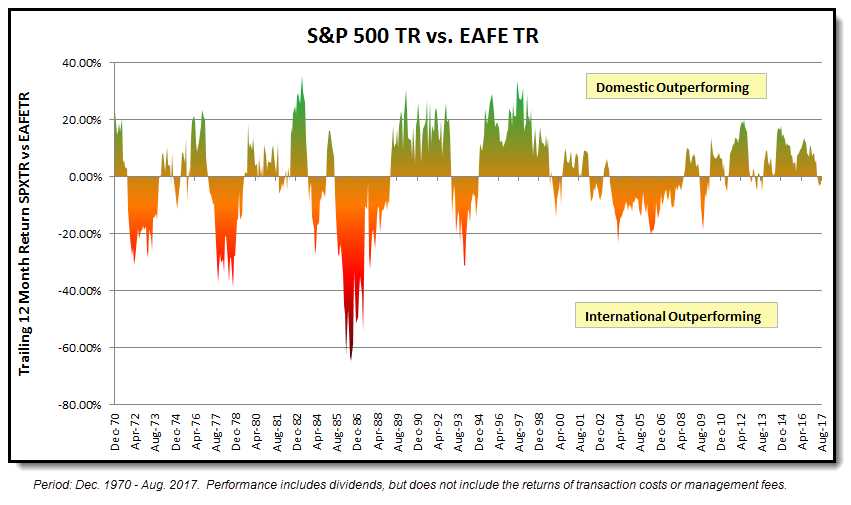 FRN Frontier ETF…50day thru 200day to upside on weekly chart. 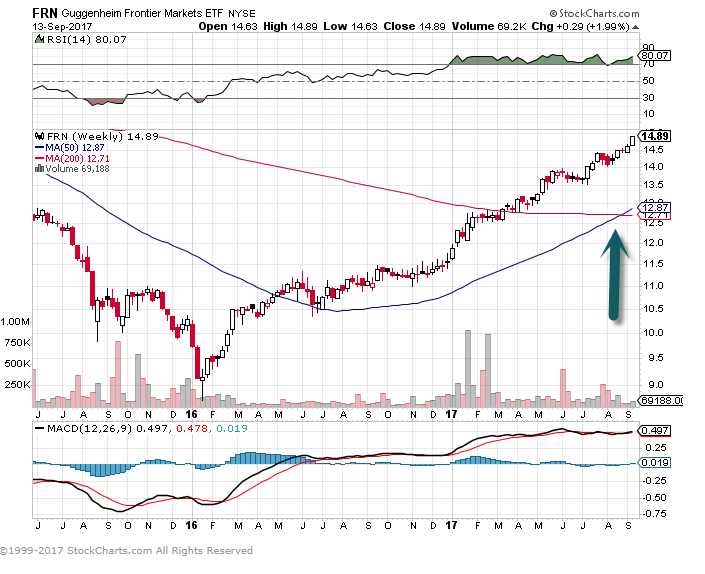 The United States: Consumer inflation expectations three years out hit a record low. This trend will add to the argument for waiting with the Fed rate hikes until next year. 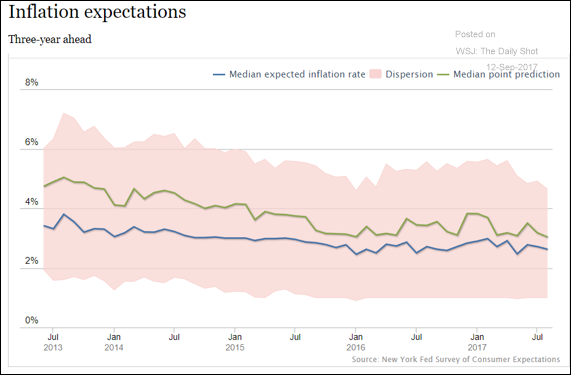 5-6. What margin debt can—and can’t—tell you about stocks and bonds

Correlations are like bread and butter for financial speculators looking for an edge over their peers.

Some focus on how crude-oil prices and shares of energy companies travel together, while others study the opposing relationship between equity values and bond prices. Leo Chen, portfolio manager at Cumberland Advisors, says investors might also want to watch margin debt, though he cautions that the predictive power of the relationship between borrowed money and the stock market isn’t crystal clear.

Such debt is taken out when investors want to buy more stock than they could otherwise afford, or in a bid to magnify returns. Brokers will often extend a line of credit to stock-buyers, but U.S. regulations limit borrowings to 50% of the purchase price.

Some hedge funds make use of leverage in an effort to deliver the benchmark-beating returns that would justify their lofty fees. On the flip side, trading losses are also magnified and can quickly prove painful.

Those who pay heed to the gauge often point out the close correlation between S&P 500 SPX, +0.08%  and changes in margin debt (see chart below). But Chen warns causation is difficult to determine as one indicator may not predict the movements of the other. 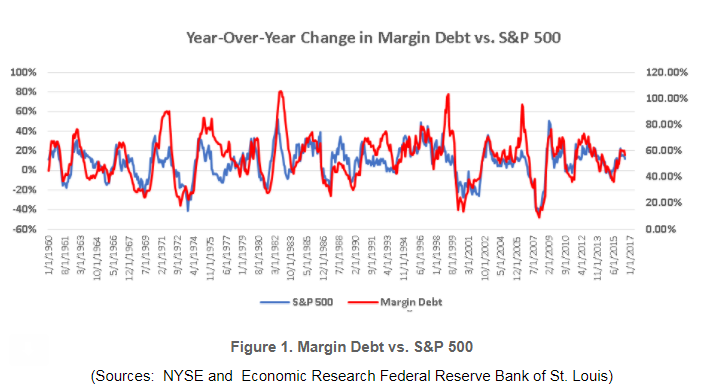 It could simply be that margin-debt is indicative of investors’ risk appetite. Chen, in the chart below, highlights how margin debt has closely followed high-yield spreads as “investors take on more bets in the equity market when corporate credit conditions improve and fewer bets when conditions falter.”

The high-yield spread measures the premium investors pay to hold an average junk bond over a Treasury of the same maturity. Such spreads tend to tighten when a corporate profit margins improve or balance sheets see reduced debt.

Another interesting relationship is how margin debt levels track the yield on the 10-year Treasury note TMUBMUSD10Y, +0.16% (see chart below).

This could simply reflect a rotation out of bonds into stocks. If market participants are taking out money from the bond market, driving a rise in yields, to plow into hot-running stock market, then “the synchronized movement between margin debt and 10-year yield is consistent with the bullish equity perspective,” Chen said.

Issue would be country’s biggest-ever U.S.-dollar bond sale and its first since 2004

The bond sale is coming as the cost of insuring Chinese government debt against default in recent months has fallen to its lowest level in two years, according to data from IHS Markit .

It costs $58,000 annually to protect $10 million of Chinese debt from default over five years, versus $100,000 in September 2015. Some investors use these credit-default swaps to hedge their holdings of Chinese debt investments. Falling costs of protection indicate lower investor anxiety about the possibility of a financial crisis developing in China. 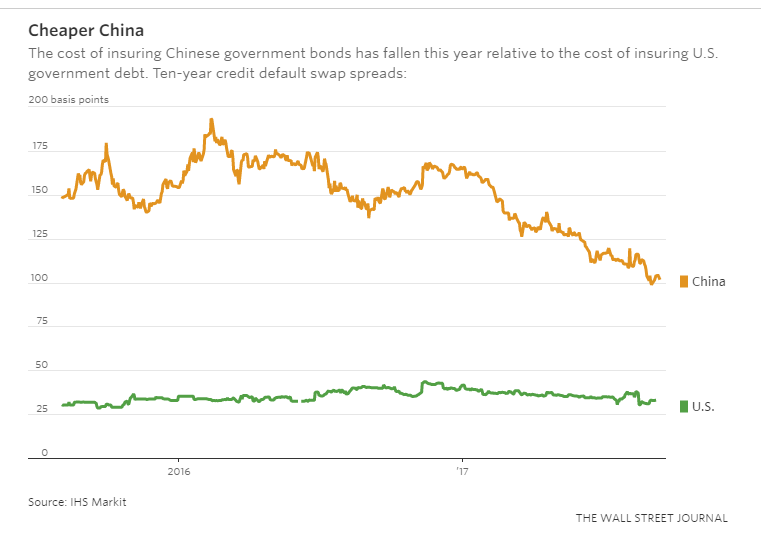 A Few Charts and a Few Thoughts at All-Time Highs

The S&P 500 has been above the 200-day moving average for 304 days, going back to last June. What’s incredible about this streak is that it hasn’t even come close to testing its 200-day. It has been more than 3% above it, an arbitrary number, for 210 straight days. This is just the seventh time since 1970 that stocks have experienced a stretch like this.

The chart below shows the S&P 500 relative to its 200-day in gray, with the other 6 instances of elevated readings highlighted in red. 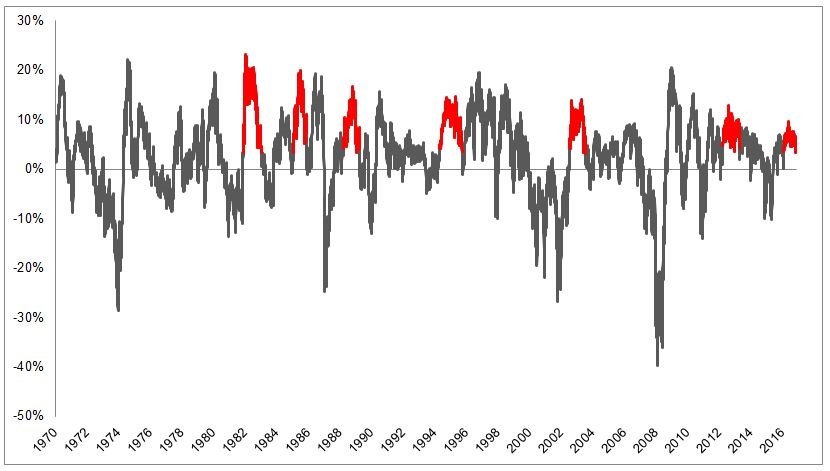 9.Read of the Day…More Americans Delaying Marriage Past Their 20s, New Data Shows

By
Agnel Philip and
Jeanna Smialek

Marriage in America just isn’t what it used to be, and new data from the Census Bureau show just how much the nuptial picture has shifted.

People are tying the knot later and having children outside of wedlock more often across demographic groups as well as later in life, the most recent Census American Community Survey data show. The treasure trove of demographic data, released annually, suggests that there is one group for which marriage has become more common: same-sex couples.

Below, in charts, is a breakdown of what’s happening with marriage and births in the U.S. — trends that have social drivers and carry significant economic implications. 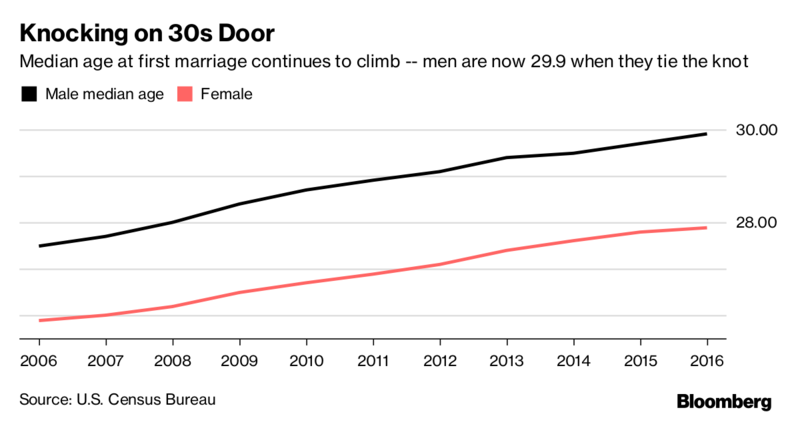 As you can see in the chart above, Americans are getting married when they’re older. The median age at first marriage for men hit 29.9 years in 2016, and women too are tying the knot later. This long-running trend matters economically: marriage often ushers in economic choices like home-buying, and married households pool wealth and resources, which can lend stability to their finances in the case of a job loss or pay cut. 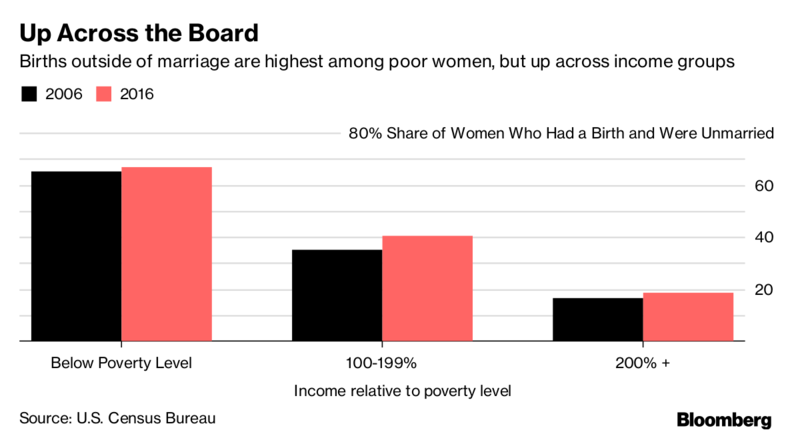 10.A psychologist explains how lucky people differ from unlucky people

Conventional wisdom states that luck is a matter of chance, similar to rolling a pair of dice. Maybe someone you know seems to snatch up the best job opportunities, your friend stumbled upon a great idea, or an acquaintance manages maintain a happy relationship.

But what is it that makes some people luckier than others?

Richard Wiseman, a British psychology professor at the University of Hertfordshire, has been studying how luck plays a role in our lives. He wanted to see how chance opportunities come about and their impact on people’s lives. He began by examining the difference between self-professed lucky and unlucky people.

Wiseman found that lucky people score significantly higher on extroversion. They smile twice as often and engage in more eye contact. Their sociability, Wiseman explains, helps them increase their likelihood of a lucky opportunity because they meet more people, connect better, and maintain relationships.

Unlucky people, on the other hand, scored twice as high on neuroticism. To see how anxiety affected people, subjects were asked to watch a moving dot in the center of a computer screen, as large dots unexpectedly flashed at the edges of the screen. Almost all participants noticed these dots.

To increase anxiousness, the experiment was repeated with another group, who were offered a financial award to focus on the center dot. More than a third missed the large dots on the edge of the screen that popped up.

While anxiety helps us focus on a task, it also blinds us to other opportunities. As a result, unlucky people miss out on prospects because they’re too busy worrying about one thing. They develop tunnel vision in their career, missing viable job opportunities. Or, they might talk to a few select people at a social gathering, and then lose out on meeting other interesting people.

Lucky people, on the other hand, are open to new experiences. They’re more willing to talk to new people, travel to new places, and try new things.

A lucky attitude towards life

On the second page, there was a large message that read: “Stop counting. There are 43 photographs in this newspaper.” Unlucky people tended to miss the message, while lucky people spotted it right away. The self-professed lucky people were simply more observant.

Lucky people are also optimistic. They have positive expectations, which lead to self-fulfilling prophecies. Even if things take a turn for the worse, they can spot the good in a situation. Unlucky people might see the same situation and only point out the negatives.

Not only do positive expectations help people become happier, but they can also help make the most of difficult situations.

How to increase your luck

To see if unlucky people could turn their luck around, Wiseman enrolled his participants in his “luck school”, where he put people through a series of exercises to increase their luck. The results were astonishing.

After one month of enrollment, 80 percent of people reported themselves as happier, more satisfied with their lives, and most importantly, luckier. The lucky ones became luckier, and the unlucky turned lucky. They had been taught how to spot good opportunities, have a positive outlook, and to make better decisions.

To increase your luck, you can practice what the “luck school” participants did:

Many often attribute other people’s fortunes to good luck, while their own misfortunes are the result of bad luck. It’s true that some people are born with advantages, or events happen to us that are outside our control.

You can always do something to build upon what you have. When you open yourself to new places, practice gratitude, and step outside your routine, you might find yourself getting lucky.