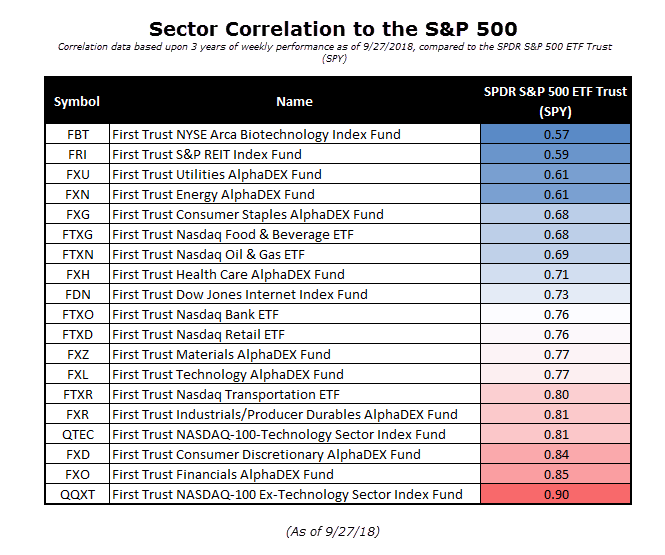 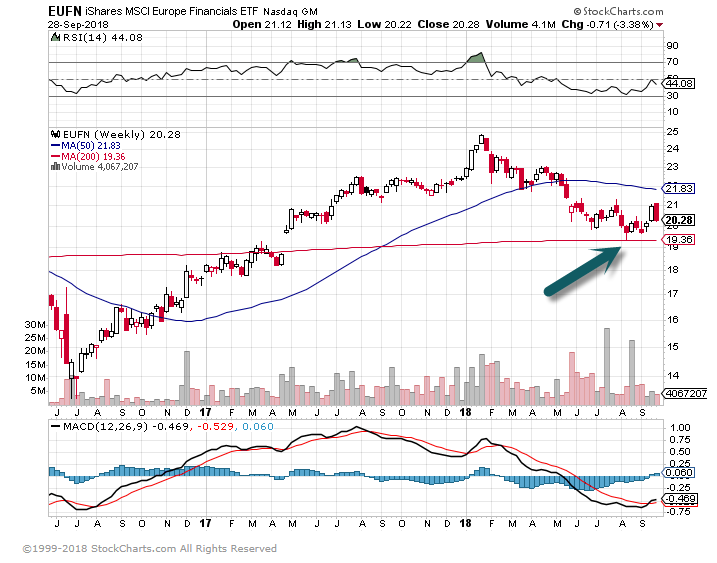 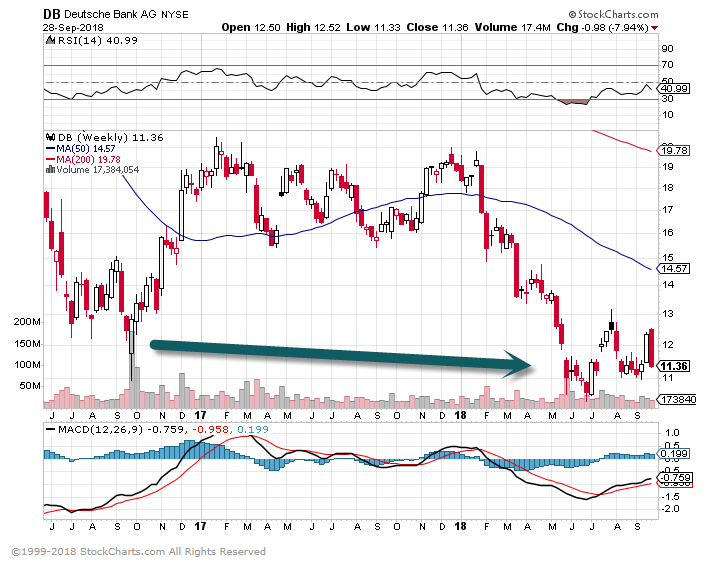 China has started unloading Treasuries, signaling that they could use their $1.2 trillion in U.S. government debt as a potential bargaining chip in trade negotiations.

China may use its massive position in U.S. Treasuries to inflict economic pain on the United States by driving up borrowing costs, but we think the probability of significant selling is low. While China’s Treasury holdings have declined, they’ve fallen only about $12 billion, or 1%, over the last two months.

The economic relationship between the U.S. and China is somewhat symbiotic: China extends credit to the U.S. (via Treasury purchases) so the U.S. can purchase goods from China (as its largest trading partner). If China sells enough Treasuries, the impact on the U.S. economy can significantly curb demand for Chinese goods, leading to an inevitable downturn in its own economy. China’s selling could also boost the yuan’s value versus its peers, which could weigh on demand for China’s exports. As shown in the chart, the yuan climbed 6% versus the U.S. dollar in June and July, in tandem with the selling.

“While China sold Treasuries in June and July, we are still not concerned about China using its balance sheet as leverage in trade discussions,” said LPL Chief Investment Strategist John Lynch. “China has a lot to lose economically with this strategy.” 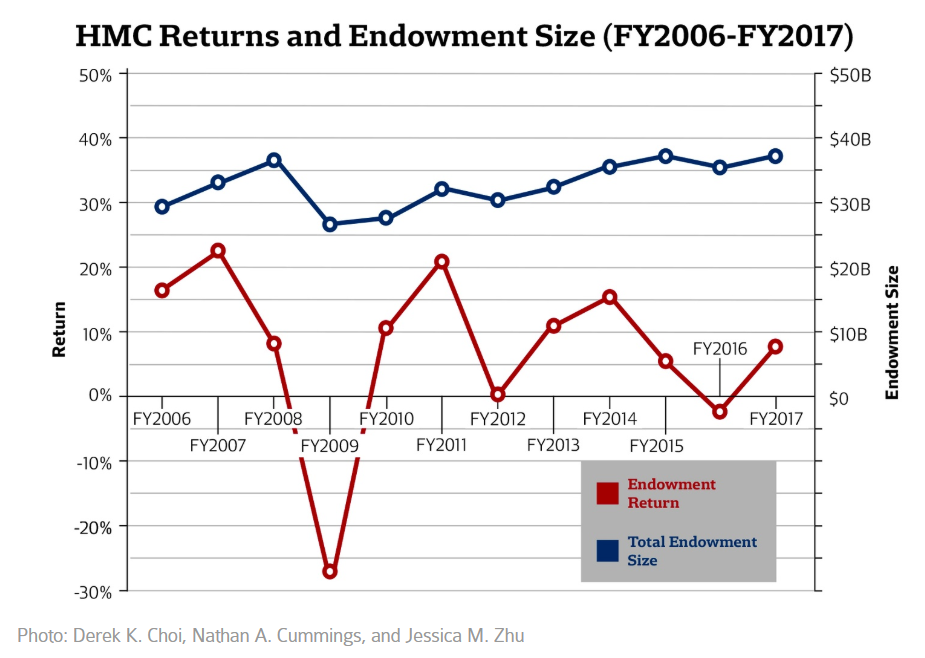 Via The Harvard Crimson

And it feels like a low blow because we’re actually writing this newsletter at a coffee shop in Harvard Square (we’re here for the Forbes Under 30 Summit)…but we should note the endowment didn’t perform as well as a few of its peers.

For the year ending June 30…

Bottom line, courtesy of The Harvard Crimson: The returns “mark an improvement from last year’s return of 8.1 percent and a serious turn-around from the loss of $2 billion in fiscal year 2016.”

Barron’s articles over weekend on mid-terms 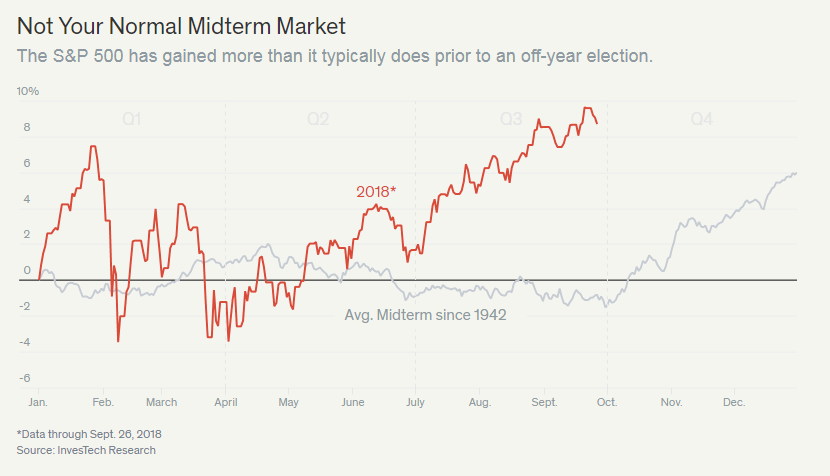 The Stock Market Follows a Pattern in Election Years. Maybe Not This Time

What a Pivotal Midterm Election Could Mean for Investors
By
Lauren R. Rublin
https://www.barrons.com/articles/what-a-pivotal-midterm-election-could-mean-for-investors-1538181587 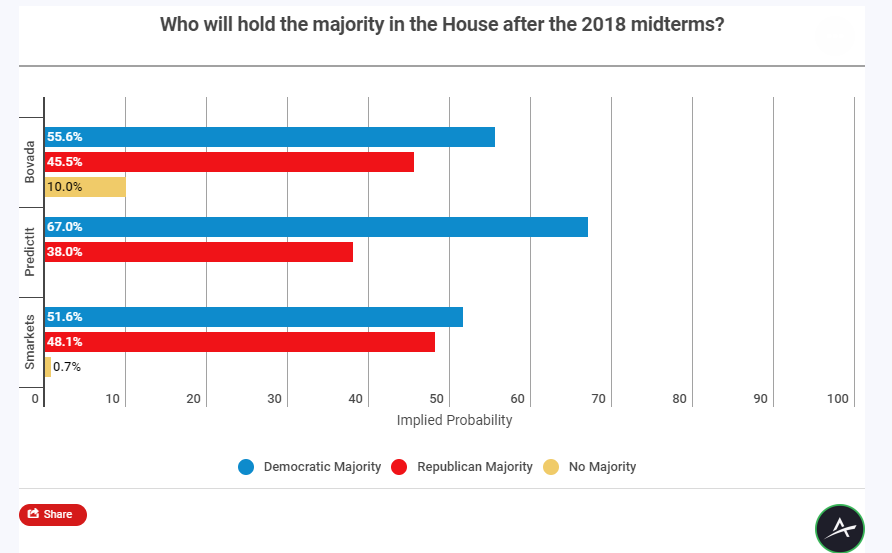 7.Homeowners are sitting on a record $6 trillion in equity. Why aren’t they using it? 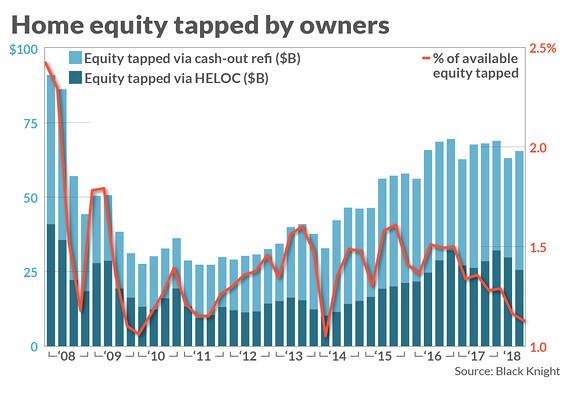 American homeowners have amassed a record $6 trillion in equity in their properties, a figure boosted by surging home prices and a trend of owners staying put longer. But rising interest rates and caution resulting from the housing troubles of a decade ago are limiting how much of that equity is getting tapped.

“Tappable” equity” – that amount of home equity that can be withdrawn and still leave owners with at least 20% equity in their homes – topped $6 trillion for the first time ever in the second quarter, according to real estate data provider Black Knight.

Read: America is house-rich but cash-poor — and these businesses see opportunity

That’s 21% higher than in the pre-crisis peak, from 2006. And it means 44 million households have equity available to them to help pay education costs, renovate the house or anything else they’d like.

But only $65 billion was withdrawn in cash-out refinances or home equity lines of credit in the first quarter, Black Knight reported. That’s more than 3% lower than the same period last year. Black Knight thinks rising interest rates have a lot to do with it: The cost of financing a HELOC averaged 5.83% in the second quarter, up 30 basis points from the first quarter and nearly a full percentage point higher than a year ago.

It’s also the case, as MarketWatch has reported in the past, that Americans are scarred by the housing bust. During the bubble years a decade ago, lenders pushed far too many exotic products that made homes into ATMs.

Even with stricter post-crisis underwriting and rosier fundamentals, many consumers remain exceptionally conservative in their borrowing habits, at least when it comes to their homes. In the most recent week, only 6% of mortgage applications were adjustable-rate, according to the Mortgage Bankers Association.

Meanwhile, rising rates are making it much harder for homeowners to do traditional refinances that allow for lower monthly payments. “Rate refinances” fell 62% in the second quarter compared to a year ago to the lowest quarterly total ever recorded: 106,000, Black Knight said.

8.Homeowners are Staying Put and Millennials are Still Renting.

Home and Lumber prices can send important messages to how the economy is doing. The chart above looks at Lumber prices over the past 11-years.

So far this year, Lumber and the DJ Home Construction index is diverging against the broad market. This chart highlights that Lumber is now down over 40% from its peak earlier this year. 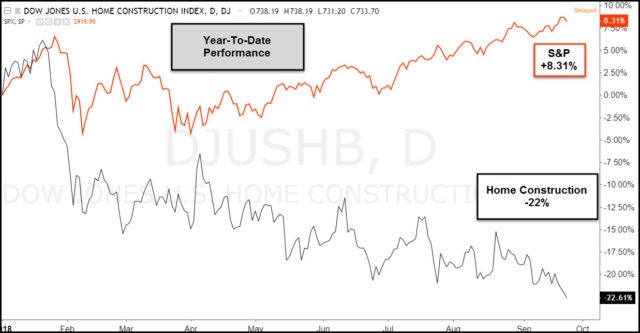 Investors might want to keep a close eye on Lumber and the Home construction index going forward, due to weakness in this sector could be sending an important message about the macro picture going forward! 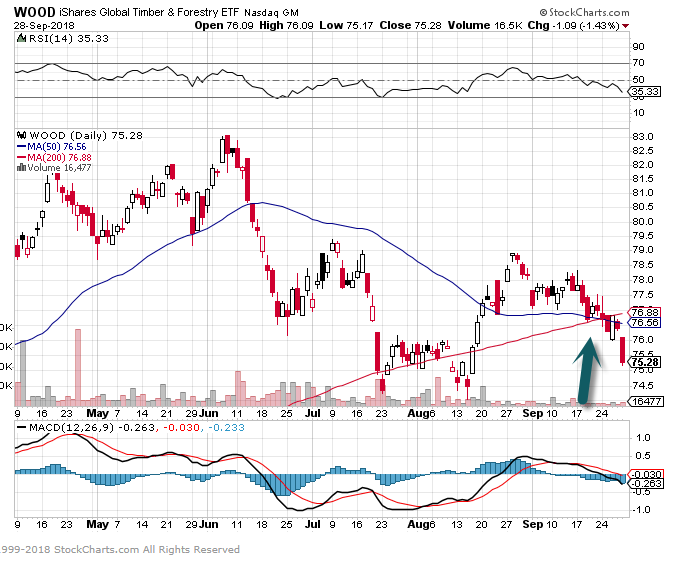 9.A Hedge Fund Manager Who Drives a Ferrari Will Probably Underperform

Seeking a high-performing hedge fund manager? Try hiring one who drives a minivan.In a perhaps unsurprising new study, university researchers found that hedge fund managers who own sports cars make riskier investments, while minivan owners were found to be more cautious investors. The paper, which is forthcoming in the Journal of Finance, was based on public records for vehicle purchases, which the authors used to identify cars owned by 1,144 U.S.-based hedge fund managers.

Overall, they underperformed hedge fund managers without sports cars by 2.92 percent per year.

“We argue that the purchase of a powerful sports car signals the intent to drive in a spirited fashion and therefore conveys a propensity for sensation seeking,” the authors wrote. Brown is a professor at New York University, while Lu works at the University of Central Florida, Ray at the University of Alabama, and Teo at the Singapore Management University.

Beyond underperforming owners of “practical but unexciting cars,” sports car purchasers were also more likely to terminate their funds and disclose regulatory actions or even criminal violations. The results of the study further suggested that these “sensation-seeking” hedge fund managers could be more predisposed to fraud.

“The disinhibition and boredom-aversion of sensation seekers imply that they cut corners on compliance and record-keeping functions, leading to higher operational risk, which hurts their clients,” the authors wrote.

Hedge fund investors, for their part, seem to “correctly perceive sensation-seeking managers to be less competent,” at least based on fund flows. According to the study, sports car owners manage an average of $515 million, $303 million less than the average hedge fund manager without a sports car.

Meanwhile, minivan drivers managed about $1.95 billion on average – $1.22 billion more than those without minivans. Still, Brown, Lu, Ray, and Teo argued that the difference in assets under management should be still higher given how much minivan drivers outperformed.

“These findings suggest that investors do not fully appreciate the superior investment skills of sensation-avoiding managers,” the authors concluded.

10. This Is the Number 1 Sign of High Intelligence, According to Jeff Bezos

This is what the Amazon founder looks for when he wants to know if someone is really smart.Amazon founder Jeff Bezos sits atop one of the most successful companies of our time, not to mention a personal fortune of some $150 billion. I think we can all agree that by any meaningful definition the guy is pretty smart. It’s also obvious he has a talent for surrounding himself with other smart people who can help make his vision reality.

How does he find them? It’s a question he addressed when he stopped by the Basecamp offices a few years ago, the company’s founder, Jason Fried, reports on the Basecamp blog. And the answer Bezos gave was the exact opposite of what most folks would expect.

Most of us, when we want to figure out if someone is smart, ask if the person is frequently right: Do they have correct knowledge about the world and their area of expertise? Do they come up with the right answers when faced with hard problems? Do their predictions turn out to be right?

But Bezos’s counterintuitive strategy isn’t just to look at how often people are right. Instead, he also looks for people who can admit they are wrong and change their opinions often.

Bezos has “observed that the smartest people are constantly revising their understanding, reconsidering a problem they thought they’d already solved. They’re open to new points of view, new information, new ideas, contradictions, and challenges to their own way of thinking,” Fried reports the Amazon boss saying.

“Consistency is the hobgoblin of little minds.”

That willingness to consider new information goes hand in hand with a willingness to admit your old way of thinking was flawed. In other words, to be super smart you have to change your mind a lot. Essayist Ralph Waldo Emerson famously said, “Consistency is the hobgoblin of little minds.” Bezos apparently agrees that consistency is overrated.

“He doesn’t think consistency of thought is a particularly positive trait,” Fried reports. “It’s perfectly healthy – encouraged, even – to have an idea tomorrow that contradicts your idea today.”

It’s not just 19th-century philosophers who agree with Bezos. Modern science does too, although psychologists have a less poetic way of speaking about the flexibility of mind Bezos prizes. They call it intellectual humility. Studies of decision making show that people who are more willing to entertain the idea that they’re wrong make markedly better choices. Being wrong, they understand, isn’t a sign of stupidity. It’s a sign of curiosity, openness to new information, and ultimately smarts.

If famous essays, top CEOs, and the latest research aren’t enough to convince you that to be smarter, you need to also be frequently wrong, you can also take it from the undoubtedly smart futurists at Palo Alto’s Institute for the Future. According to Stanford professor Bob Sutton, they encapsulate this trait of highly intelligent folks this way: “strong opinions, which are weakly held.”

As the futurists explained to Sutton, weakly held (and therefore often changed) opinions are important because they mean you aren’t “too attached to what you believe,” which  “undermines your ability to ‘see’ and ‘hear’ evidence that clashes with your opinions.”

So next time you’re trying to determine if someone is actually super smart or simply bluffing, don’t ask whether they’re always right. Instead, ask when was the last time they changed their opinion. If they can’t name lots of times they were wrong, they’re probably not as smart as they want to appear.