1.Tech and Financials are Half the Weighting of Emerging Markets.

If we had a bitcoin for every time we heard someone say that the S&P 500 has been too reliant on the performance of tech stocks for its gains this year, we would be very rich.  But if you think the S&P 500 is dangerously overweighted towards the Technology sector, beware of emerging markets.  While the Technology sector’s 23% weighting in the S&P 500 makes it by far the largest sector in the index, the ETF tracking Emerging Markets (EEM) is even more heavily weighted towards technology.  The chart below compares sector weightings in the ETFs that track the S&P 500 (SPY) and Emerging Markets (EEM).  As you can see, Technology has a 26.5% weighting in EEM.  So if you think the S&P 500 is too top heavy with tech, EEM is even more exposed. 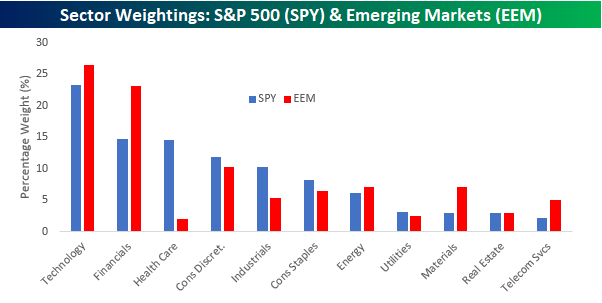 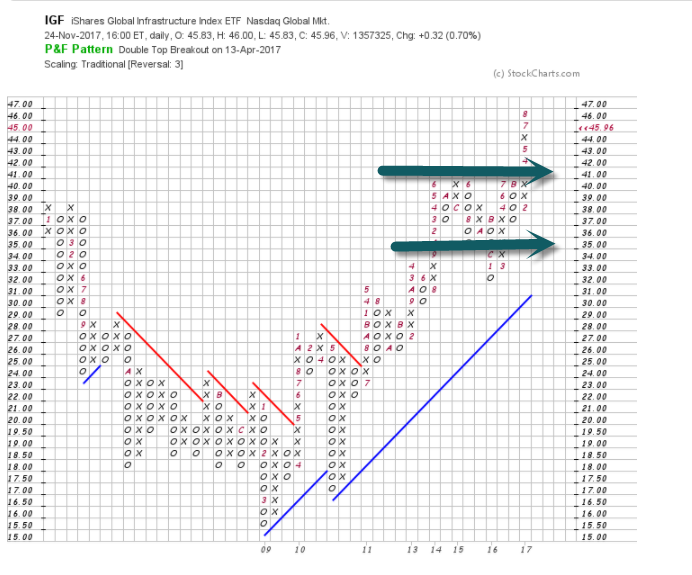 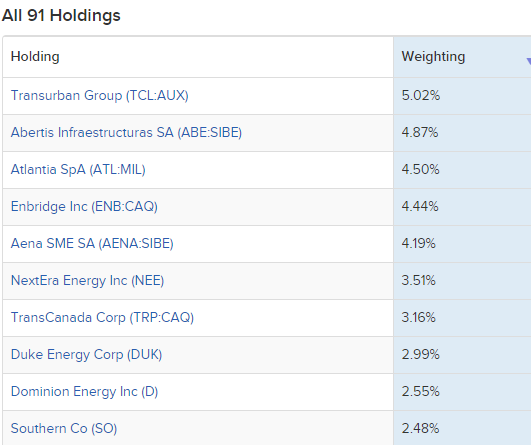 Americans are acting like Americans again….Spending all their money. 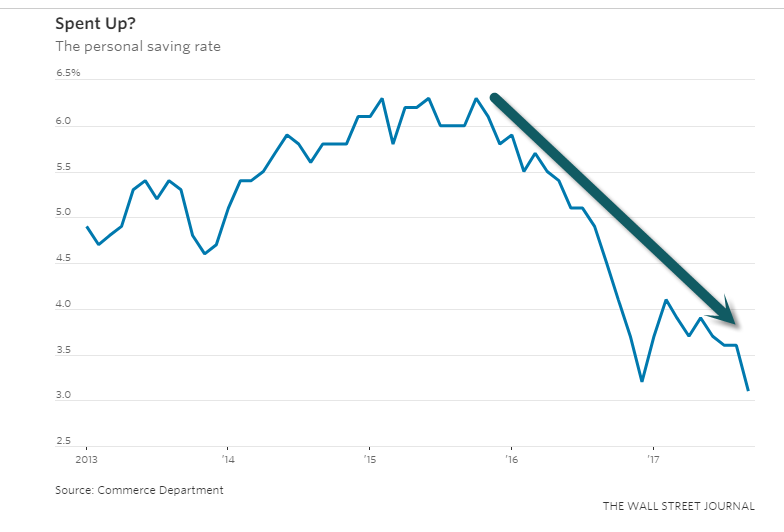 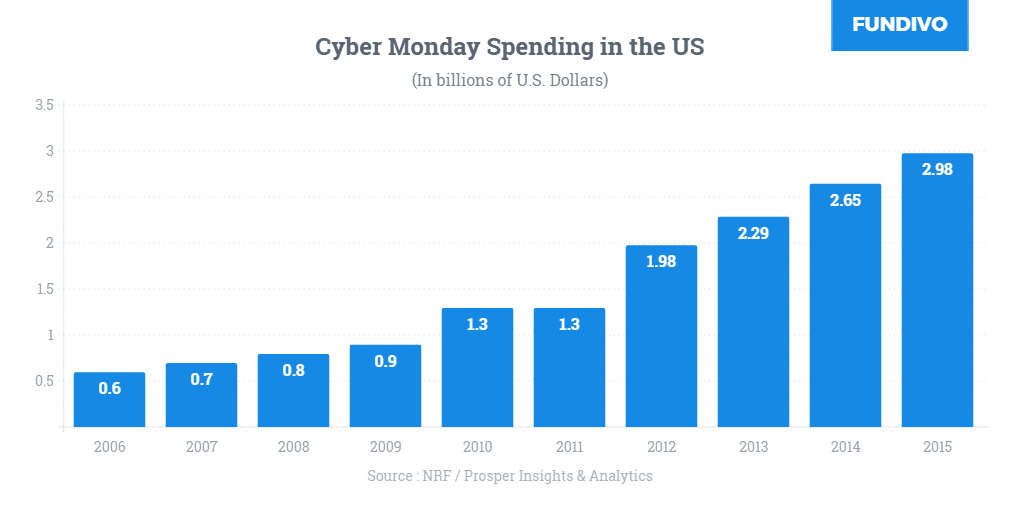 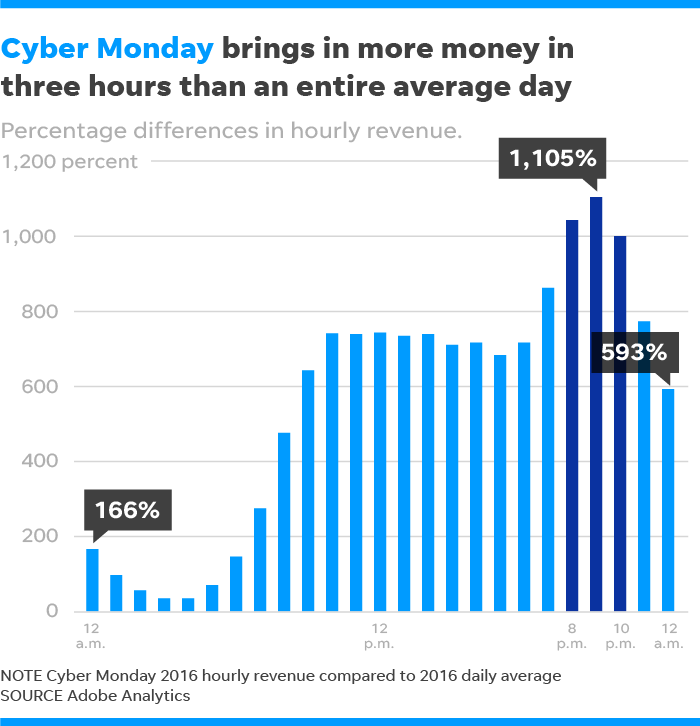 5.Aussie Housing Market Is Four Times the Size of Economy…U.S. Bubble Did Not Even Hit 2x…The Next Big Short?

Not even the U.S. and U.K. markets achieved such heights at their peaks 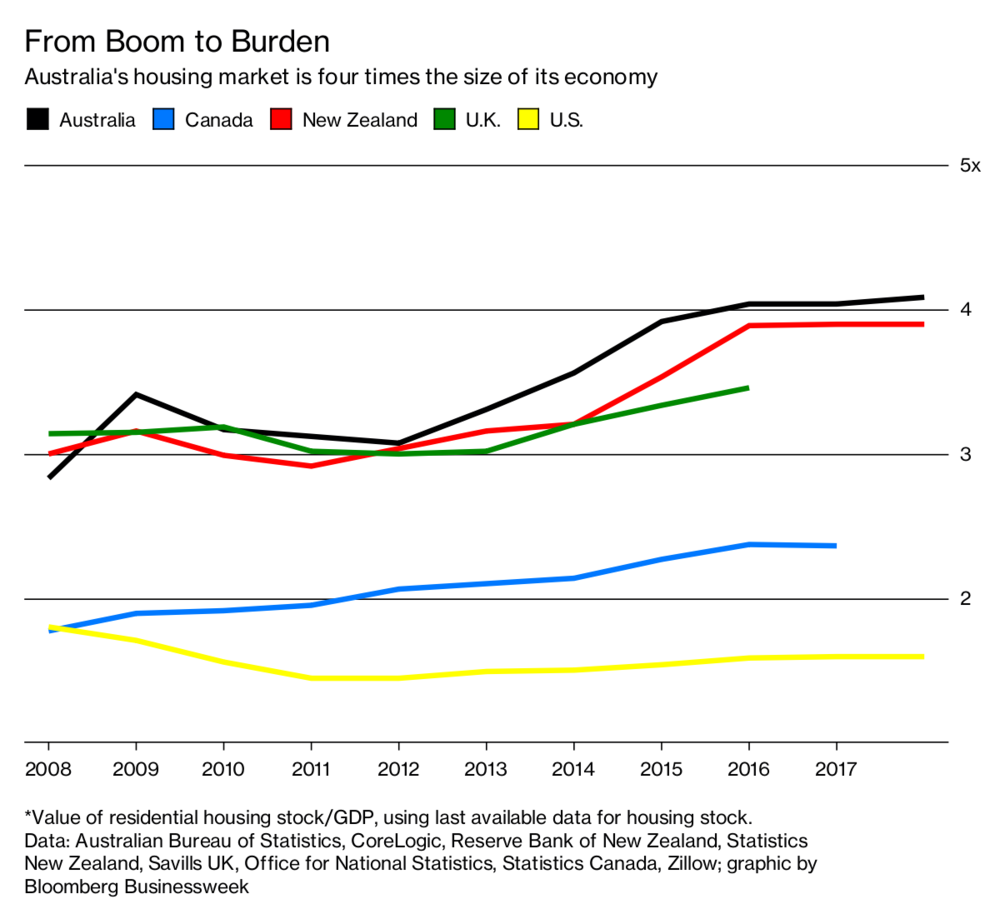 Australia’s housing market dwarfs its economy after five years of red-hot price growth. The value of the nation’s homes has ballooned to A$7.3 trillion ($5.6 trillion) — or more than four times gross domestic product. Not even the U.S. and U.K. markets achieved such heights at their peaks a decade ago before prices spiraled lower and dragged their economies with them. “The risk is that it leaves the Australian economy extremely exposed, and a minor shock could become far more significant,” said Daniel Blake, an economist at Morgan Stanley in Sydney.

6.Do Factors Work in International Equities?

A few weeks ago, we looked at the current state of affairs in smart beta factors in the U.S. markets. With flows into U.S. smart beta stock ETFs in recent years, we found that there was a reduced, but not eliminated, effectiveness with a factor-based approach.

Many investors see international equity markets as generally less efficient than U.S. markets, and as such, we wanted to see if factors have a greater propensity to outperform the broad market outside the U.S.

For definitions of the terms in the graph please visit our glossary.

Over the last 10 years, the size, quality and momentum factors have generated strong excess returns compared to the MSCI EAFE Index. Echoing what we saw in the U.S., the value factor is in the midst of its worst relative performance in its (albeit shorter) history.

An important takeaway we found was that for the international size, value and momentum factors, their excess performance over the last 10 years was greater than what we found from their U.S. counterparts (and the international quality factor, although having slightly less robust outperformance than the U.S. quality factor, still managed to outperform the MSCI EAFE Index on every rolling 10-year time frame).

To us, this has massive implications: that a factor-based approach may be even more effective at outperforming cap-weighted indexes in international markets than in U.S. markets.

7.Another Bitcoin Chart…Volatility?? How about one 20% crash per quarter?

The Crypto Bubble Is Driven by Speculation, Not Its Transformative Potential

Blockchain technology may someday become a widespread alternative currency. But Bitcoin’s rally appears to be driven by price speculation rather than its potential as legal tender.

One defining pillar of a currency is its ability to act as a store of wealth. However, Bitcoin is anything but a reliable store of value. 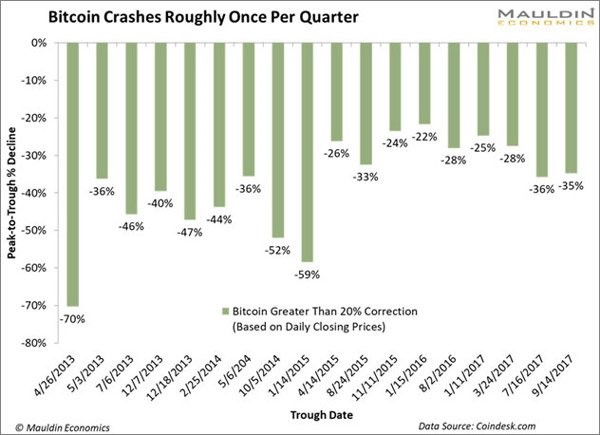 Today, Bitcoin is extremely volatile. It has at least a 20% correction once every three months. Bitcoin has had a 30% or more correction 12 times in the last four years.

Sales of nontraded business development companies are on track to decline for a third consecutive year and are on the way to posting their worst year for equity raising since 2010, when the product was just beginning to be widely sold by independent broker-dealers.

Nontraded BDCs managed to raise just $624 million over the first nine months of the year, compared to last year’s 12-month sales total of $1.5 billion, according to Robert A. Stanger & Co. Inc., an investment bank that tracks the sales of alternative investments, including nontraded real estate investment trusts. And sales this year are far below the levels seen when the product was at its peak in 2014, when brokers sold $5.5 billion of nontraded BDCs, according to Stanger. 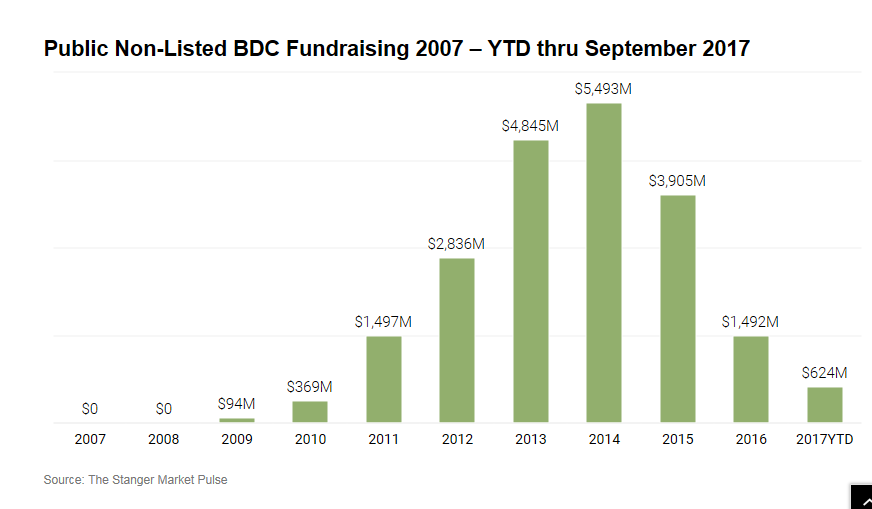 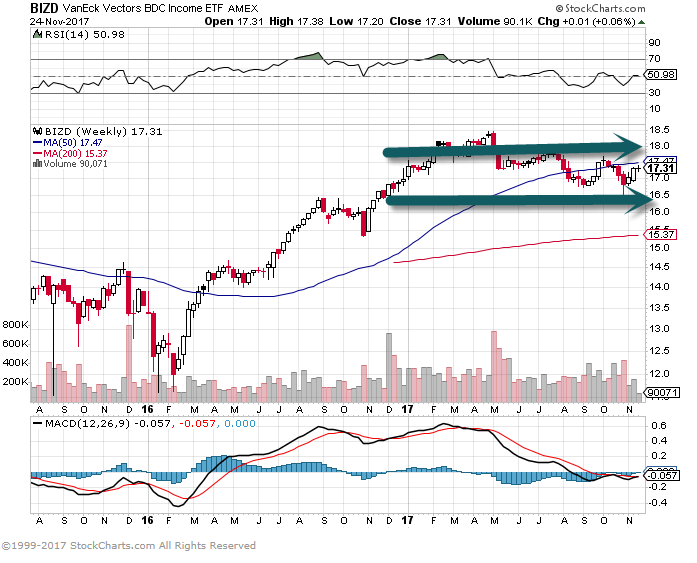 9.Read of the Day..Home Prices Rise 7.1% After Supply Falls for 25 Straight Months.

What Happens to the Real Estate Market When Supply Falls for 25 Straight Months?

Written by Alina Ptaszynski on November 16, 2017

Home price growth was strong in October, up 7.1 percent compared to a year ago to a national median sale price of $288,000 across the markets Redfin serves. Sales were essentially unchanged from October of last year, down 0.1 percent. Home sales have declined year over year for the past four months.

“Despite strong buyer demand, sales are sputtering due to low inventory,” said Redfin chief economist Nela Richardson. “The last time we saw a substantial increase in the number of homes for sale, Donald Trump was a candidate in a Republican field of 11.”

Nationally, the number of homes for sale plunged 12.2 percent, the sharpest year-over-year decline in inventory since 2013. There was a 3.1-month supply of homes in October. Less than six months of supply signals the market is tilted in favor of sellers. We have not seen more than 6 months of supply in any month since January 2012.

The low-inventory situation is particularly stark in West Coast markets. The San Jose metro area saw the steepest year-over-year inventory drop and the sharpest corresponding price increase. There were fewer than half as many homes for sale in October as there were a year earlier, sending prices up 19.2 percent to a median of $1.05 million. In San Jose the typical home that sold last month found a buyer in 12 days.

Just eight of the 74 metros Redfin tracks posted year-over-year increases in inventory. These rare supply gains were seen primarily in smaller markets in the Midwest and the South, including Austin, New Orleans, St. Louis, Dallas, and Nashville.

Nationally, the typical home spent 44 days on the market, five days fewer than last October. Last month, average sale-to-list price ratio was 98.2 percent, up from 97.9 percent a year earlier, and 22.5 percent of homes sold above their list price, compared with 21.5 percent in October 2016.

10.The 7 elements of a successful retirement

Retirement requires flexibility and a comprehensive look at your lifestyle

Start with well-defined goals, and revisit them at least annually. The closer you get to retirement, the more often you should sit down and think about your overall retirement strategy. In Ernie Zelinski’s “How to Retire Wild, Happy and Free,” the author makes the argument that setting your retirement goals expands far beyond managing your finances. Retirement planning should encompass all areas of your lifestyle, from where you live and where you travel to how you spend your day and what truly are your income requirements. Cookie cutter percentages and rules of thumb serve merely as benchmarks. Successful retirement planning requires flexibility and the willingness to look at all aspects of your life.

Another aspect of retirement is lifetime learning. Staying relevant in today’s technology economy requires a willingness to learn and adapt. Consider this: most medical professionals would agree that 20% to 30% of medical knowledge becomes outdated after just three years. Keeping current on technology and medicine will certainly enhance your retirement success.

Budgeting is more than setting a top-line spending number based on a pre-arranged percentage. Often times, we work from the bottom up, exploring what a client actually spends, instead of what they think they spend. It is not uncommon for individuals to drastically underestimate their spending on non-essential items. How much is your cell phone bill? Cable bill? Groceries? Starbucks?! We encourage clients to look at these as recurring payments. Not $140 a month, but $1,680 a year. Big difference, right? Getting as granular as possible is liberating when planning your retirement income.

While many planners suggest that a client will need two-thirds of their working salary to live comfortably in retirement, our experience shows that they may need anywhere from 50% to 150%. That’s a big range. Only by taking the time to define your goals, and the expenses that accompany them, can we put an accurate “spend” and “income” figure on a retirement portfolio. Even the best crafted budget has to be flexible. Emergencies happen. Grandkids happen. Sadly, health concerns happen. For both positive and negative circumstances, budgets can, and will, expand and contract. Build contingencies into your budget and income plan for a successful retirement.

Let’s consider income. Retirement income can come from many sources. Social security, pensions, retirement accounts, annuities, dividends, even earned income. As financial planners, we often hear stories from clients who “forgot” that they had earned an pension from an employer that they had left decades ago.

Take the time to go through your employment history and discover what benefits you may have forgotten. The impact could be meaningful from a cash-flow perspective. Inheritances can also create retirement income. Again, we often see clients receive an inheritance and immediately spend it. We’d rather go with the gift that keeps on giving – by investing the inheritance along the same lines of a retirement asset and creating a lifetime income stream.

Invest for your whole life. Just as your budget is not going to be static during your retirement years, the idea that your investment portfolio should never change is obsolete as well. We live in a world of massive disruption and change. Years ago, retirees would abide by the rule taking 100%, subtracting their age, giving them the “appropriate” allocation to the equity market (blue chips only!). Today’s world does not permit such simplicity of thought.

Here’s the real reason why U.S. health care is so expensive

This philosophy created an asset allocation for retirees that was heavily dependent upon the fixed income markets. Risk in today’s fixed income markets is considerably less predictable. When creating income in a portfolio, investors should examine many different sources of income. Is it time for fixed or variable rate income sources? Are dividend producing stocks inexpensive or overvalued? Is real estate a proper asset to produce income? Can alternative investments like MLP’s create an income stream? In finding these answers, a successful retirement income stream can become multifaceted and flexible.

Some investors have opted for “all-in-one” strategies, where a glide path mutual fund encompasses their entire retirement portfolio composition. These funds become gradually more conservative the closer an investor gets to retirement. Some funds manage “to” the retirement date, while others manage “through” the retirement date. If you own one of these vehicles, do you know what the fund is designed to accomplish? These funds use historical data to project out into the future the ideal asset allocation. We don’t know what the future holds, and advocate investments that have the ability to be flexible.

Nick Ventura is the founder and chief executive of Ventura Wealth Management.