If you are not feeling thankful…Watch this N.Korean citizen take 5 bullets running to freedom.

1.The Rise of Asian Tech 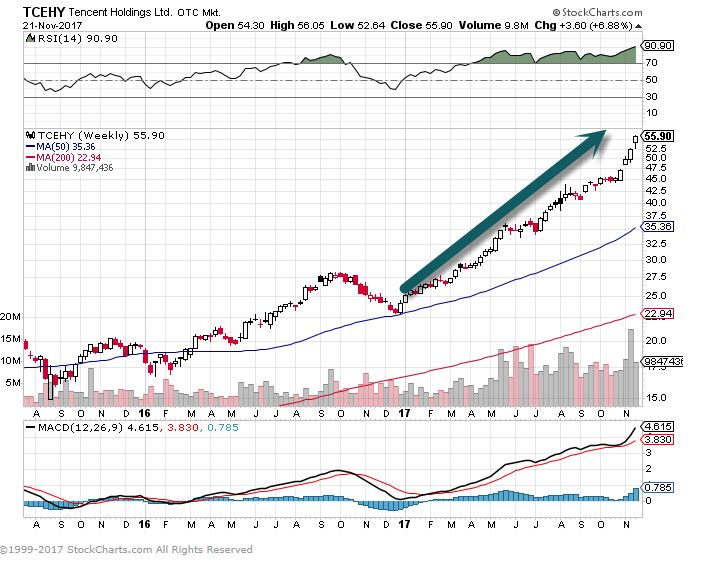 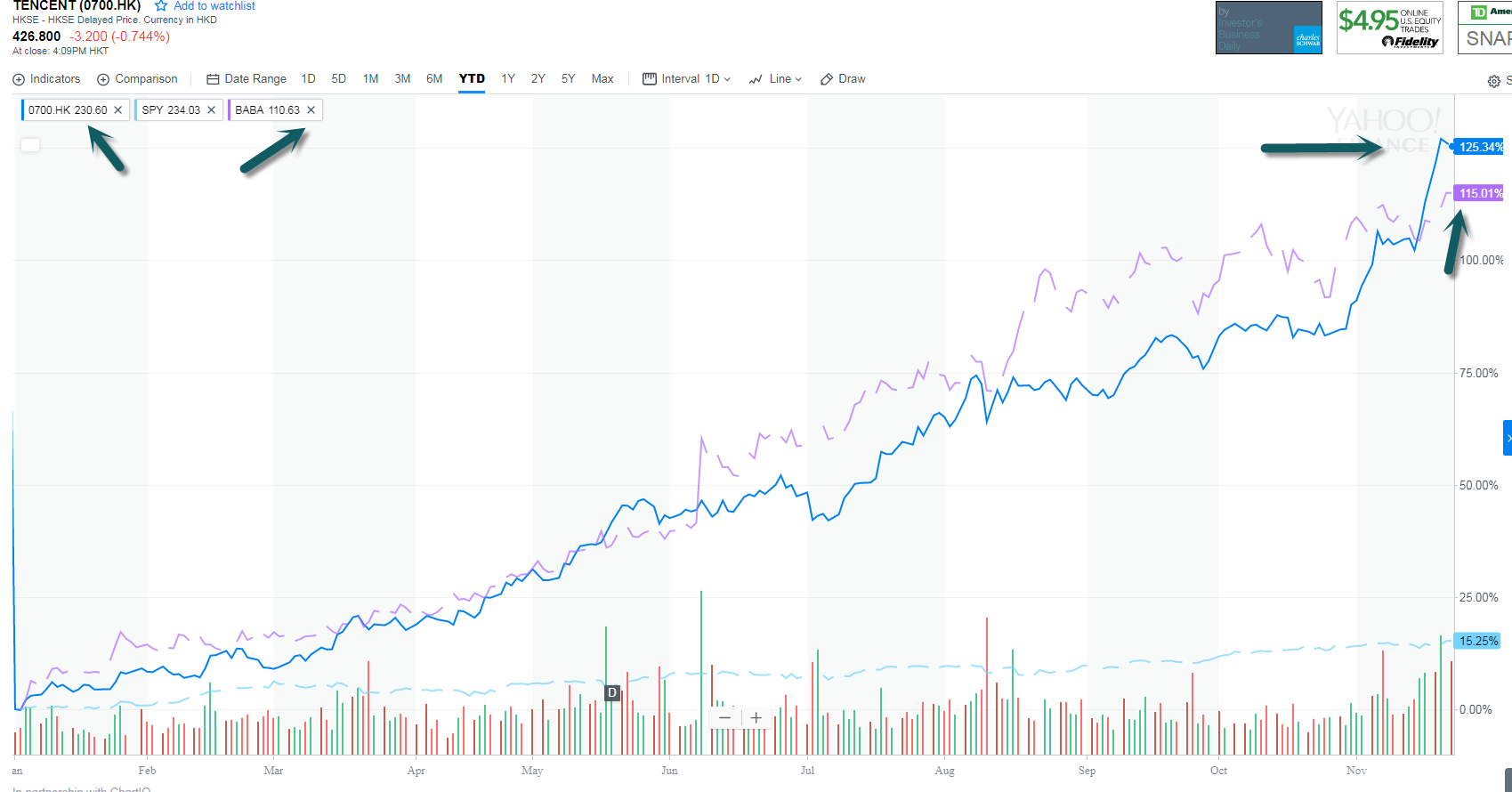 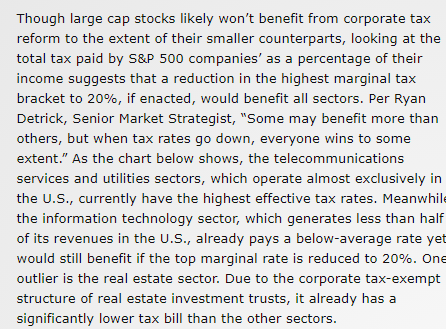 We all know by now that it has been a very strong year for the Technology sector.  Not only have the gains been large, but just about every stock associated with the sector not named IBM has had a great year.  In fact, within the S&P 500 Technology sector, all seven Industry Groups have rallied at least 10%, and all but two (Communications Equipment and IT Services) are up over 30% (table below)!  So far this quarter, Technolgy has remained strong with every Industry Group in the black by at least 5%.  Suffice it to say, 2017 has been the year of Tech.

While Technology has seen broad-based strength in what has been a strong market overall, some may be surprised to see that the Utilities sector has also seen a very broad rally.  While the gains haven’t been nearly as strong as the advance in Tech, the Utilities sector is the only other one where all of its Industry Groups are up at least 10%!  When it comes to market performance, you don’t typically see Technology and Utilities sharing similar characteristics or trends, but this year they have seen among the most uniform rallies within their respective groups. 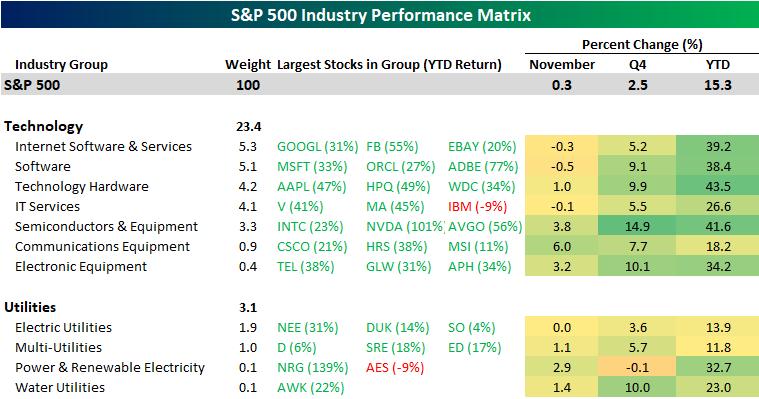 4.Technology Dispersion from Other Sectors Hitting Levels not Seen Since Late 1990’s 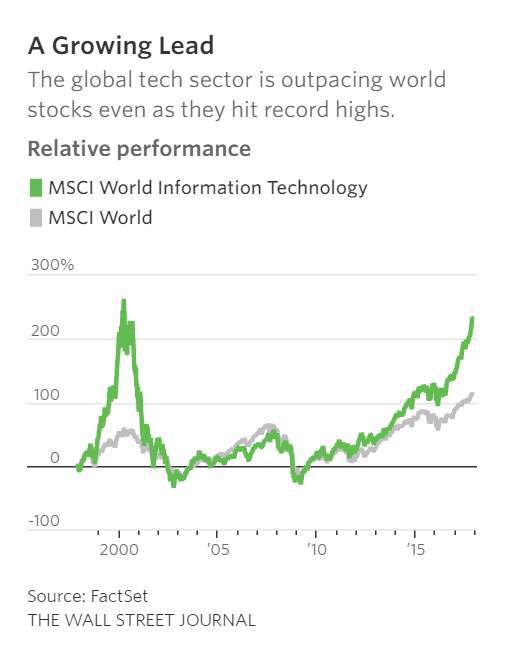 Where the money went in Q3: bonds and more bonds

While every asset class saw net inflows in the third quarter, bonds unequivocally stole the show. From July through September, bond ETFs added $32 billion. This figure is not just astonishing on its own—it also represents an unprecedented third quarter in a row that fixed income ETFs attracted $30 billion-plus.

What’s especially notable here is the diversity of flows. While broad bond market ETFs saw their share ($8.3 billion for the quarter), it’s clear that investors are taking advantage of many bond options available in ETFs.

Investors didn’t abandon Treasuries, though. With fears of a richly-priced stock market, they looked to U.S. government bonds ($8.2 billion) to offset potential equity risks. The biggest focus here was on short-term securities, which tend to be less vulnerable to Federal Reserve’s rate hikes than longer-term bonds are. They’re also a way to step out of cash and back into the markets with minimal added risk. 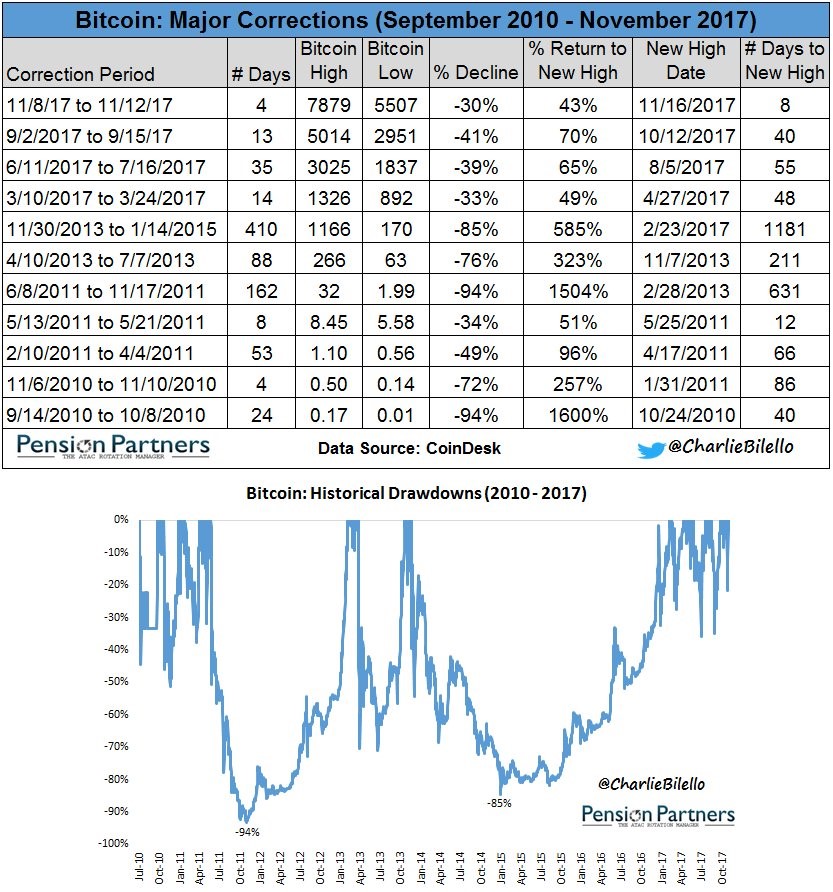 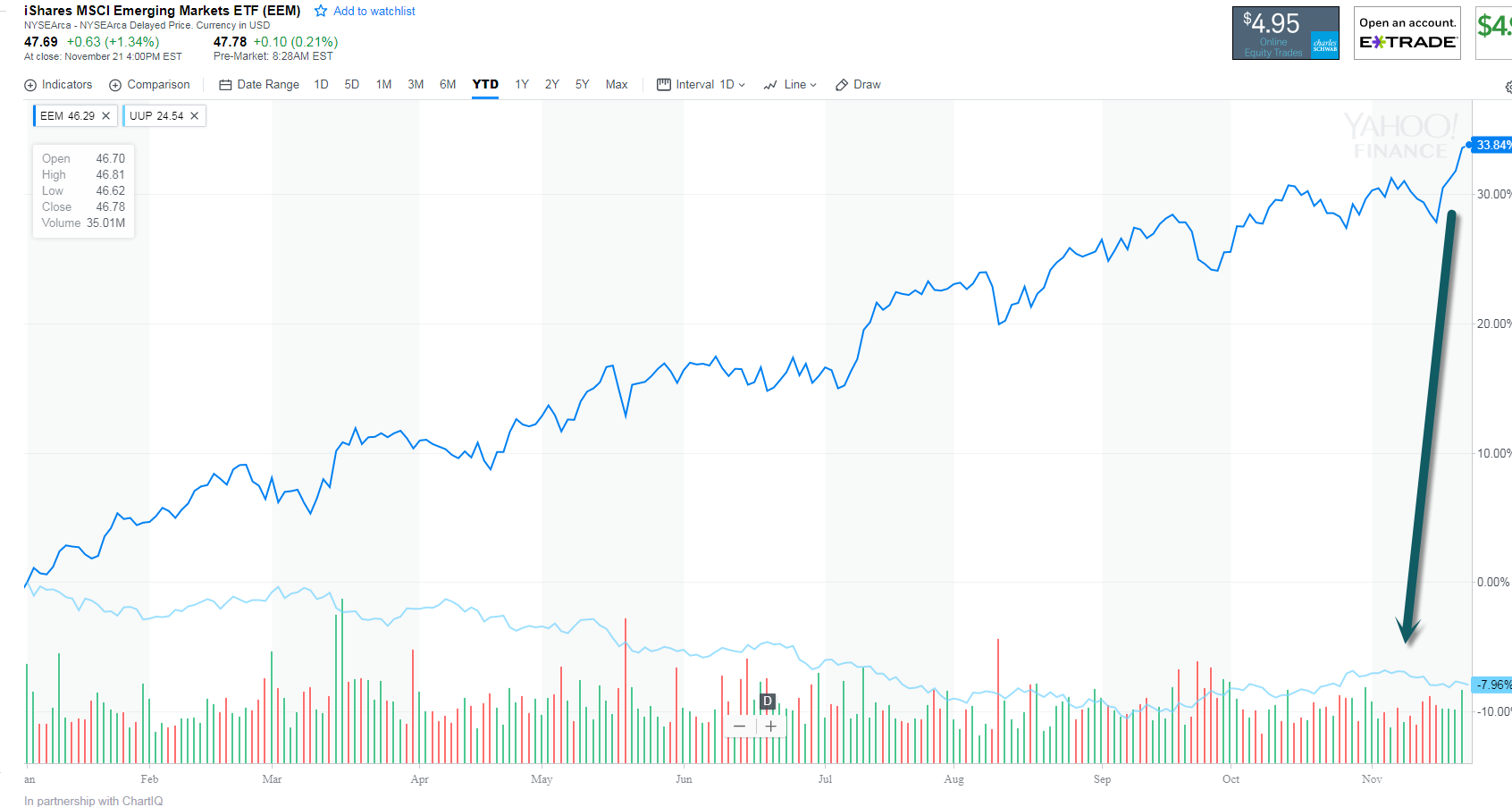 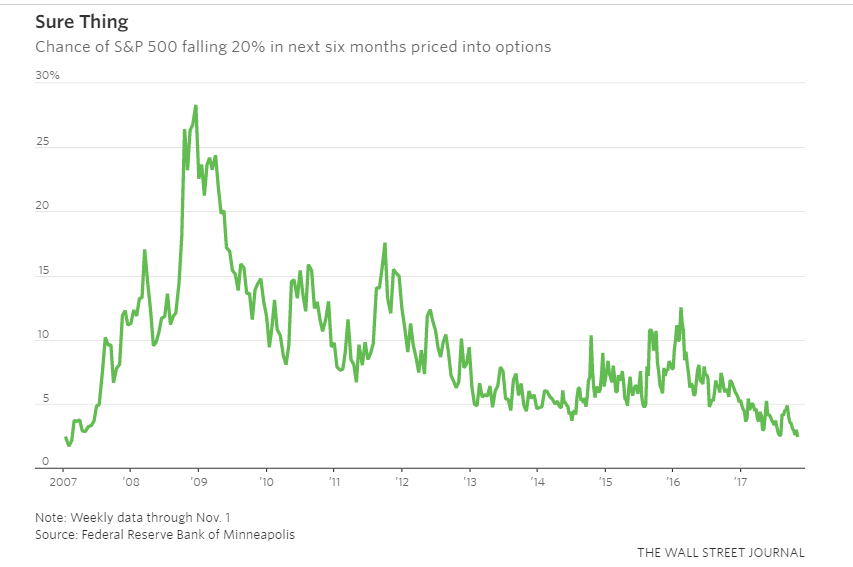 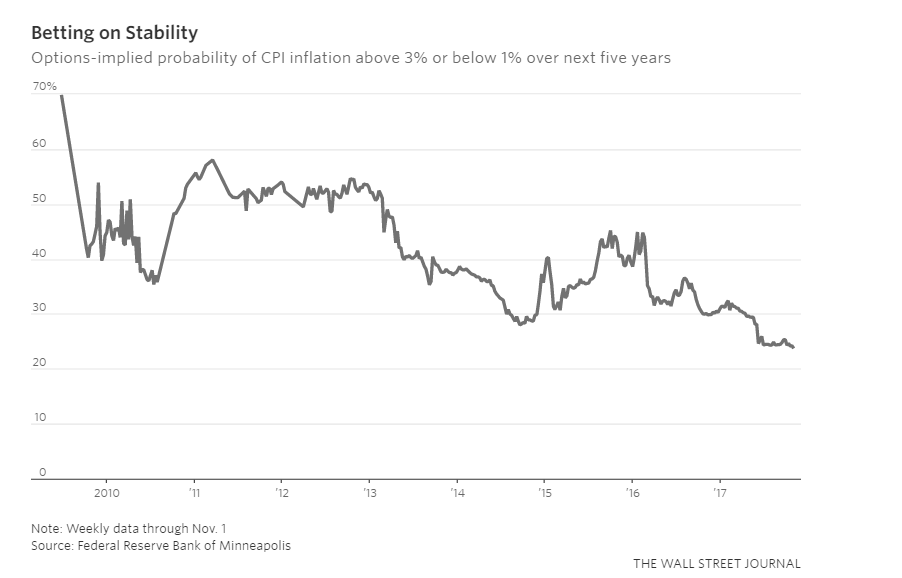 9.Read of the Day……The future of America’s suburbs looks infinite

Just a decade ago, in the midst of the financial crisis, suburbia’s future seemed perilous, with experts claiming that many suburban tracks were about to become “the next slums.” The head of the Department of Housing and Urban Development proclaimed that “sprawl” was now doomed, and people were “headed back to the city.”

This story reflected strong revivals of many core cities, and deep-seated pain in many suburban markets. Yet today, less than a decade later, as we argue in the new book that we co-edited, “Infinite Suburbia,” the periphery remains the dominant, and fastest growing, part of the American landscape.

This is not just occurring in the United States. In many other countries, as NYU’s Solly Angel has pointed out, growth inevitably means “spreading out” toward the periphery, with lower densities, where housing is often cheaper, and, in many cases, families find a better option than those presented by even the most dynamic core cities.

Reality check: What the numbers say

Less than a decade since the housing crisis, notes demographer Wendell Cox, barely 1.3 percent of metropolitan regions live in the urban cores we associate with places like New York City, Boston, Washington or San Francisco.

Counting the inner ring communities built largely before 1950, the urban total rises to some 15 percent, leaving the vast majority of the population out in the periphery. More important still, the suburban areas have continued to grow faster than the more inner-city areas. Since 2010, the urban core has accounted for .8 percent of all population growth and the entire inner ring roughly 10 percent; all other growth has occurred in suburban and exurban areas.

Much of this has been driven by migration patterns. In 2016, core counties lost roughly over 300,000 net domestic migrants while outlying areas gained roughly 250,000. Increasingly, millennials seek out single-family homes; rather than the predicted glut of such homes, there’s a severe shortage. Geographer Ali Modarres notes that minorities, the primary drivers of American population growth in the new century, now live in suburbs. The immigrant-rich San Gabriel Valley, the Inland Empire, Orange County and their analogues elsewhere, Modarres suggests, now represents “the quintessential urban form” for the 21st century.

Where the action is

Some maintain that as they have become more diverse, suburbs have become the largest geography for poverty. This is indeed true, and unsurprising, given the hugely larger share of population in suburbs, but poverty rates in suburbs remain roughly half those in core cities.

Overall, what suburbia dominates is the geography of the middle class. All but four of top 20 large counties with the highest percentage of households earning over $75,000 annually are suburban, according to research by Chapman University’s Erika Nicole Orejola. One reason: Most job growth takes place in the periphery. Even with the higher job density of downtowns, the urban core and its adjacent areas account for less than one-fifth of all jobs, and since 2010 this pattern has persisted.

Some urban cores, such as Manhattan and San Francisco, dominate many high-wage sectors, notably media and finance, but much tech growth remains clustered in low density regions, whether in Silicon Valley, Raleigh-Durham, north Austin or Orange County. Urban theorist Richard Florida has found that suburbs generate the bulk of patents; in fact, three-quarters come from areas with less 3,500 people per square mile, less than half the density associated with urban centers.

Those who wish to demean suburbia often claim that suburban living is more unhealthful than living closer to the urban core. But the County Health Rankings project reveals that residents in suburban metro counties enjoy lower rates of premature death (years of potential life lost before age 75) than those who live in other types of counties, including urban ones, and a better health-related quality of life. Moreover, lower density development allows suburbs to save cities from themselves by providing the ecosystem services for cleaner air, water storage and absorption, and solar energy production high density cities are ill-suited to provide.

Suburbs, being spread out and largely car-based, are often attacked as being disproportionate creators of greenhouse gases linked the climate change. However, research being done for the first time on the household scale suggests that urban cores and exurbs may produce more GHG than suburban areas. This will certainly be the case when electrified autonomous cars hit mass market. Autonomous intersections alone could produce an estimated 20 to 50 percent less carbon dioxide, because there would be fewer idling cars and jack-rabbit starts, suggests Remi Tachet des Combes, a mathematician who created robot-intersection models while at the Massachusetts Institute of Technology.

New technology, as well as the growth of work at home, can create the basis for more sustainable suburbs, and, if estimates from the consulting firm Bain are correct, enough momentum that by 2025, more people will live in exurbs than in the urban core. Ultimately the future of suburbia need not be as dismal as the critics suggest, but one that forms a critical, even preeminent, part of the nation’s evolving urban tapestry.

Joel Kotkin is the R.C. Hobbs Presidential Fellow in Urban Futures at Chapman University in Orange and executive director of the Houston-based Center for Opportunity Urbanism (www.opportunityurbanism.org). Alan M. Berger is co-director of the MIT Leventhal Center for Advanced Urbanism and co-editor of Infinite Suburbia (Princeton Architectural Press).

10.Want to Be a Self-Made Millionaire? With 1 Sentence, Mark Cuban Reveals How to Get Rich

So when he was asked what he would do if he lost everything, here’s what he said he would do first:

“I would get a job as a bartender at night and a sales job during the day, and I would start working. Could I become a multimillionaire again? I have no doubt.”

Why does he feel that way? Success is based — in almost any field — on solid sales skills.

But if you think of selling as explaining the logic and benefits of an idea, a decision, a project — of anything worthwhile — then everyone needs sales skills. Everyone needs to have the ability to convince other people that an idea makes sense, to show bosses or investors how a project or business will generate a return, or to help employees understand the benefits of a new process.

Gain sales skills and you’ll be better at everything: bringing investors on board, lining up distribution deals, landing customers, motivating employees. Especially in the early stages of starting a company, seemingly everything you do involves some form of sales.

That’s why spending time in a direct sales role is an investment that pays off for the rest of your life.

For example, when you learn to sell:

Salespeople hear the word no all the time. Over time, you’ll start to see a no as a challenge, not as a rejection. And you’ll figure out what to do next.

When you work for a big company, you can sometimes sleepwalk your way through a day and still get paid. When you work on commission, your credo is, “If it is to be, it’s up to me.” Working in sales is a great way to permanently connect the mental dots between performance and reward.

Working in sales is the perfect cure for shyness. You’ll learn to step forward with confidence, especially under duress or in a crisis.

Closing a sale is part art, part science. Getting others to agree with you and follow your direction is also part art and part science.

Many people find it hard to ask for what they want. If you want to lead people, you must be able to explain what you want — and then close. That’s why great bosses know how to close.

Still not convinced? Think of it this way: The more intimidating or scary a position in sales sounds, the more you need to take one. You’ll gain confidence and self-assurance, and the skills you gain will serve you well for the rest of your business — and personal — life.

“Knowing what my sales skills are and the products that I am able to sell,” Cuban says, “I think I could find a job selling a product that had enough commissions or rewards for me.”

And that would generate enough seed money to let him start his own business and let him use his sales skills to make money for himself, not for an employer.

Learn how to sell.

It’s the best investment you will ever make.