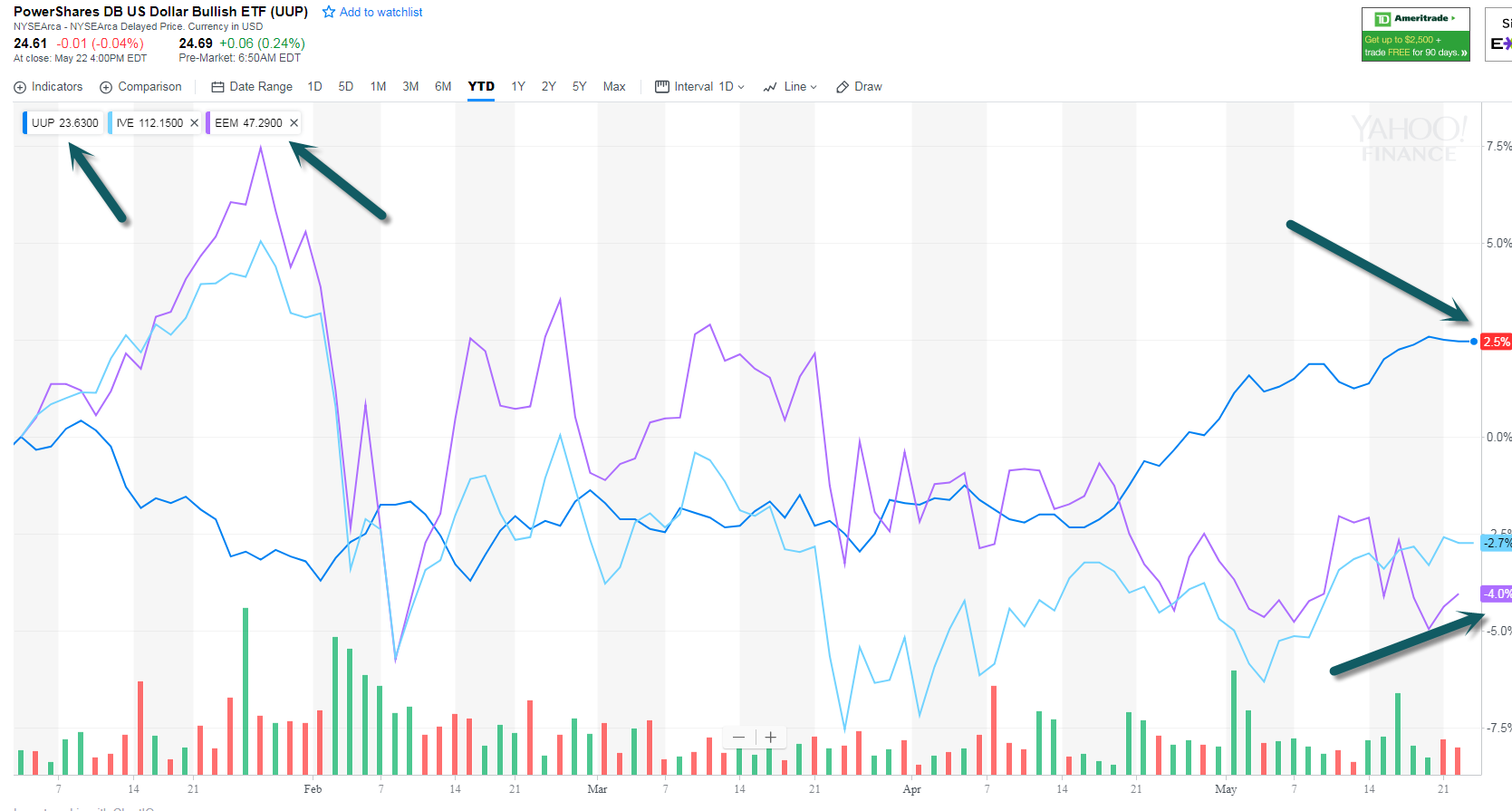 Emerging markets are deemed to be more speculative than the more mature U.S. stock market. 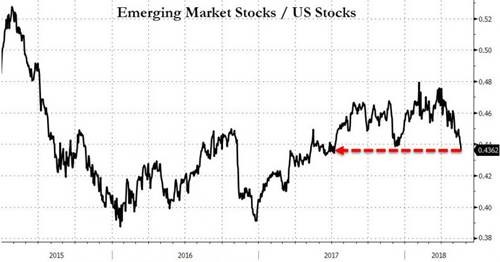 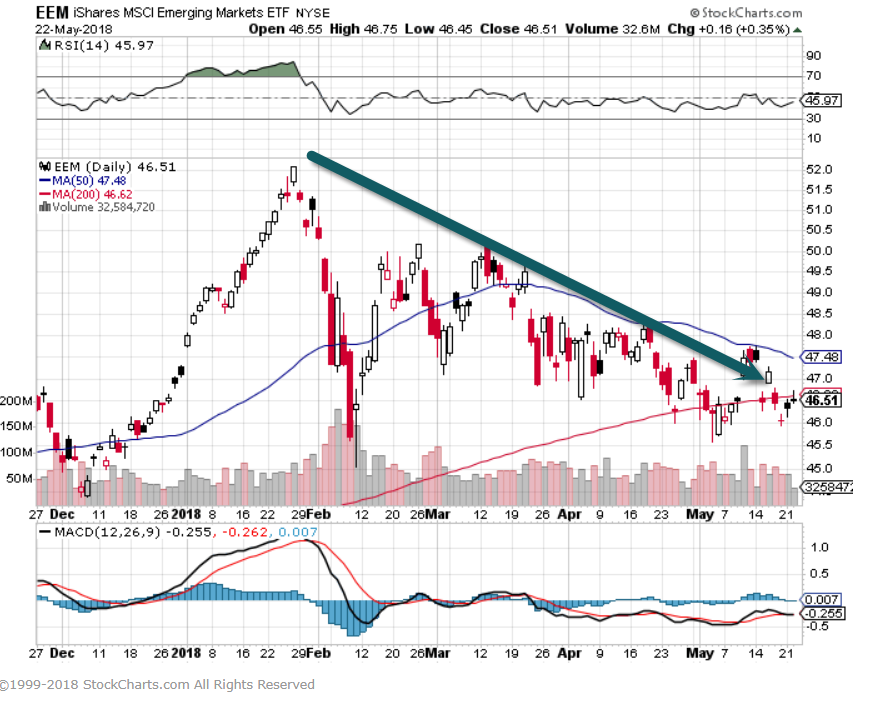 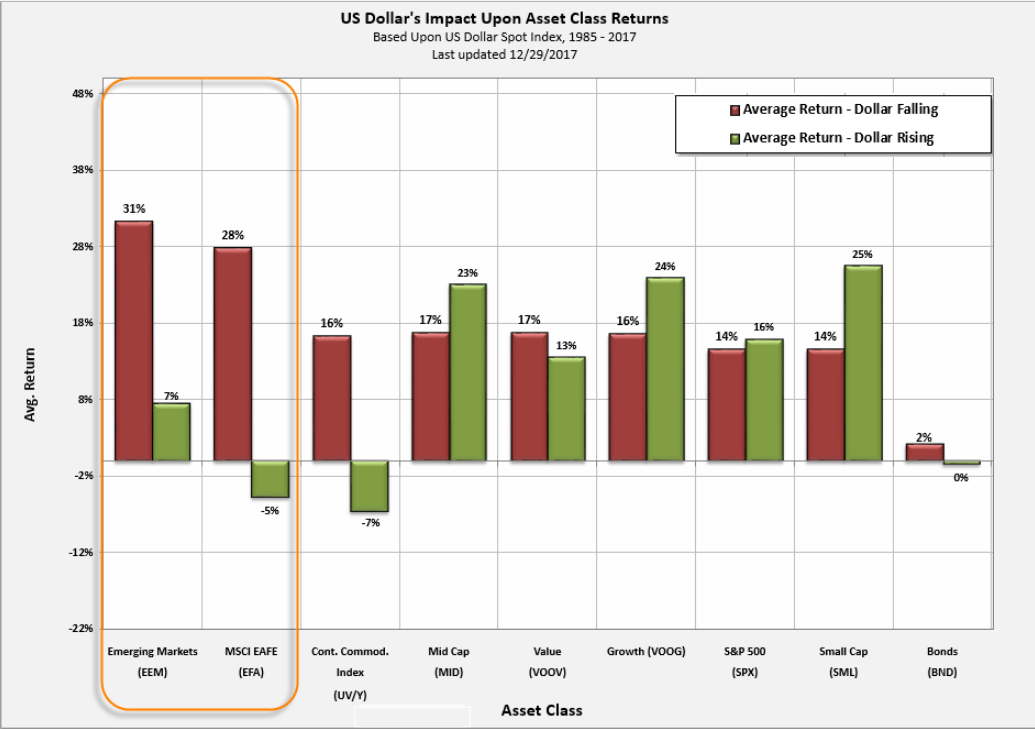 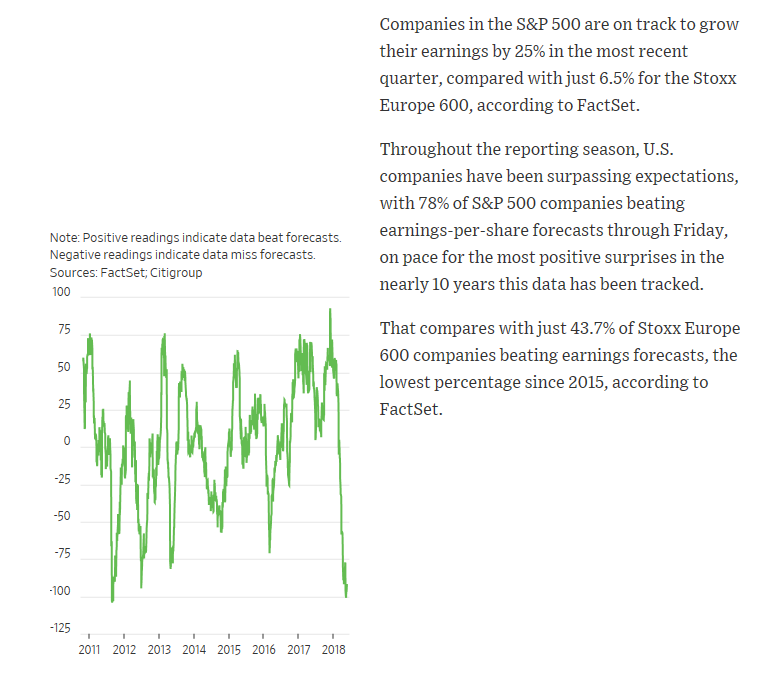 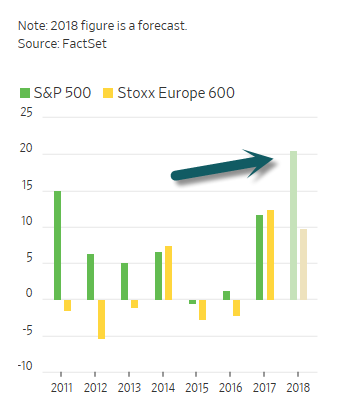 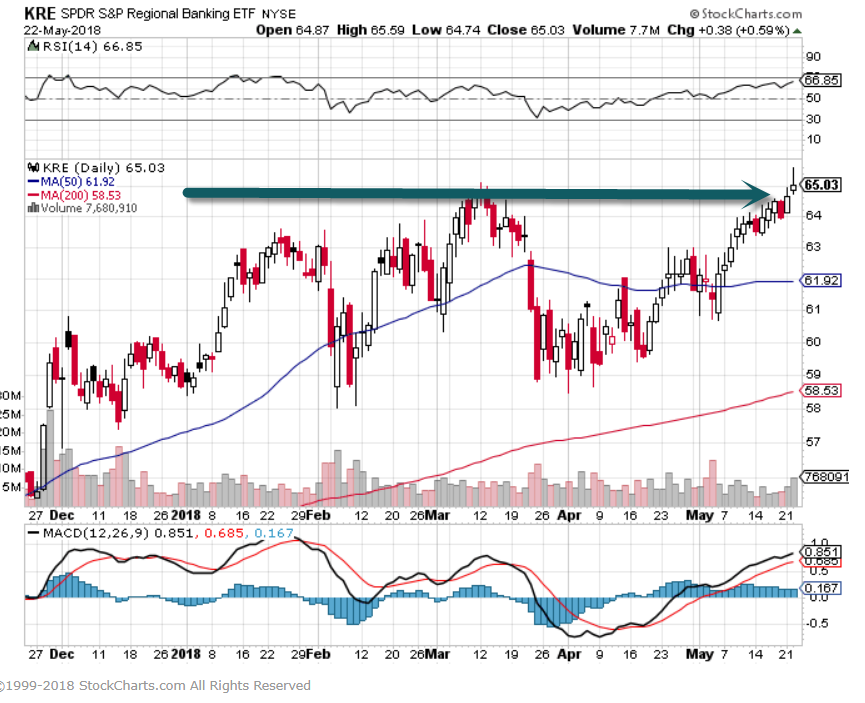 Perhaps most significant, the Crapo bill would increase the threshold for a bank to qualify as a Systemically Important Financial Institution, or SIFI: 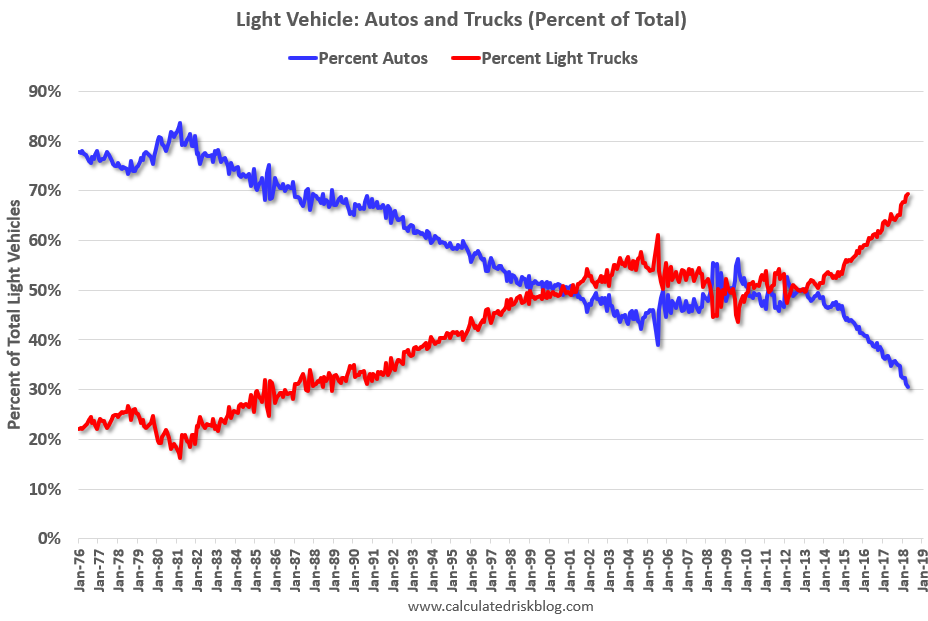 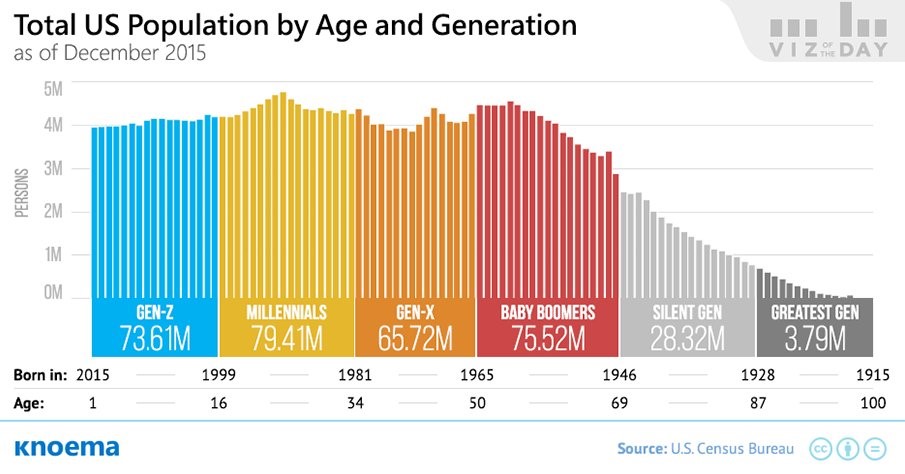 9.Read of the Day…How Much Of The House Do You Actually Use?

Why the American Dream of owning a big home is way overrated, in one chart

Do you NEED this much space?

From 1978 through 2015, the median size of the single-family home increased every year until it peaked at 2,467 square feet, according to the U.S. Census Bureau. Then, in 2016, that number began to shrink, albeit ever so slightly.

So, are we finally coming to our senses about McMansions?

Of course, owning a big house has long been a key component of the American Dream — you know you’ve arrived when you have columns, an indoor pool and a theater room — but, in reality, it’s all usually a huge waste of space, according to a study cited by Steve Adcock on the Get Rich Slowly blog.

A research team affiliated with UCLA studied American families and where they spend most of their time while inside their homes. The results were fascinating, but really not all that surprising. Here’s one representative example: 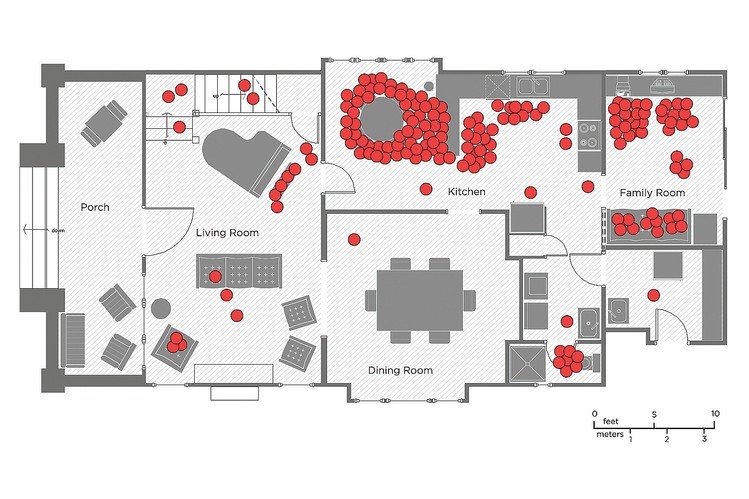 As you can see, most square footage is wasted as people tend to gather around the kitchen and the television, while avoiding the dining room and porch.

“The findings were not pretty. In fact, they helped prove how little we use our big homes for things other than clutter,” Adcock said. “Most families don’t use large areas of their homes — which means they’ve essentially wasted money on space they don’t need.”

And Adcock knows a thing or two about utilizing space.

Like the family in the illustration above, he used to spend all of his time hanging out in the kitchen and family room in his 1,600-square-foot home. Now, after managing to retire from his full-time gig at the age of 35, he lives his version of the American Dream in an Airstream trailer with his wife.

Check out a tour of his “home”:

“The full-time RV life isn’t for everyone, and it’s not my intent to convince you otherwise,” Adcock explained. “Instead, use my story as a testament to the fact that large homes are very much a choice. Few of us need the space we buy.”

His takeaway: Forget the standard realtor advice that you should “buy as big of a house as you can afford.”

Instead, buy as much house as you need. “More does not automatically equal better,” he said. “More simply means more

Some of the greatest men the world has ever known are voracious readers. Teddy Roosevelt was said to read a book every morning. General James Mattis is said to have a library of over 600 books. Bill Gates reads a book a week. Mark Cuban reads for 3 hours every day. Elon Musk was once asked how he learned to build rockets, to which he replied, “I read books.”

Now, I’m not suggesting that by simply reading books, you will achieve the types of results these men have achieved but, reading and acquiring new knowledge through the written word is something that seems to be a common thread line through most, if not all, successful people.

Today, I’ll share with you why that is and I’ll also be issuing you a challenge we’re going to be holding over the next 30 days.

It seems that more and more, people are completely irrational when it comes to their ideas about how this world works. We base our beliefs and decisions on how we feel and our opinions rather than objective truth.

Readers by the very action of them reading expose themselves to new thoughts and ideas which naturally triggers the ability to think differently about previously held beliefs. Rather than spend so much time and energy trying to defend their current ideas, they are in constant search of new ones and through the nature of exploring ideas, solidify their current beliefs or find new, more effective ones to replace them.

READERS HAVE A WIDE PERSPECTIVE

Let’s face it. We all live in a box. This box is the box we create. I am more guilty of this than anyone else. I see the world through my lens and jump to the conclusion that it must be the only way in which people should operate.

I understand this about myself and am on a constant journey toward expanding my horizons and striving to see things from a new perspective. This, in turn, allows me to be more empathetic to others and see a world I had previously closed myself off to.

This does a couple things. First, I am much more capable of connecting with others when I see that they may look at the world differently than I do. Connection is a huge part of being a man. It makes us more influential which allows us to lead more effectively. Second, it allows me to hold more conviction in my own way of looking at things. Think about a defense attorney. Sure, his job is to come up with an effective defense strategy but a large part of that is putting himself in the position of the prosecution so he can adequately prepare himself for the opposition.

Creativity is one of the most powerful forces for success. It’s been said that there are no new ideas, only old ideas repackaged, repurposed, connected differently. If that’s true, the best way to create different results is to expose yourself to new information.

I’ll admit that I don’t read a lot of fiction but I’m always surprised that when I do, I find parallels to my life and the problems I see that I have not previously seen or thought of.

As men, we are problem-solving machines. Your ability to think creatively about the problems you see could spell the difference between failure and success.

READERS HAVE AN ABILITY TO FOCUS

In the fast-paced world in which we live, it would do us all well to learn how to focus on one thing at a time. Most of have what has been dubbed “bright, shiny object syndrome.” We get excited about something then see something more appealing and forget all about the thing we were excited about just 24 hours ago.

The skill of focus is a very translatable skill. It will help you be a more successful husband, father, business owner, coach, friend, neighbor, employee, etc. And, the only way to become more focused is to practice focus. This is why I like to read physical books (some prefer digital books). Some people say that listening to books is just as good. I disagree. It may be effective in acquiring new information but acquiring new information isn’t the only reason to read.

To me, reading is a form of meditation that forces me to sit still for longer periods of time and focus on just one thing – the message – at a time. The more I read the more focused I can be for sustained periods of time.

Having a good idea is important. But without the ability to communicate them well, you’re dead in the water.

And, as with anything, if you want to be successful at something, find someone who is succeeding in that area and do what they do.

We have the ability through books to tap into the minds of the most successful communicators the world has ever known: Winston Churchill, Teddy Roosevelt, Martin Luther King Jr. Socrates, Billy Graham, Ronald Reagan, and Abraham Lincoln, to name just a few.

Read their works, pour over their words, study how they articulated their ideas, and put them into practice.

READERS RECOVER THROUGH THE PRACTICE OF READING

Reading is relaxing, bottom line. We live in a world where it’s constantly in “go” mode. I know this because I pride myself on being a high-achieving man. I’m sure you do as well otherwise you wouldn’t be here. So, if you’re anything like me, you have the desire, and feel the need, to be doing something constantly.

There is so much information out there in the world. Through the use of social media, magazines, books, movies, TV, etc. we have access to information unlike the world has ever known. It is amazing how much information we can consume and it’s critical that we do. We need to be careful not to overconsume and never put into practice what we have discovered but how much more powerful could we be if we could discuss ideas from a position of understanding rather than ignorance.

If you don’t know something, Google it, read about it, get some information on the subject. Being informed is one of the most powerful ways to build influence. One of the people I admire most when it comes to being informed is Joe Rogan. It is amazing to me how much he knows about a wide range of topics. When I listen to him talk with a guest on his podcast, I am always blown away by his understanding of topics I know nothing about. He’s just one example of someone who is obviously well-researched and it’s no wonder his podcast is one of the largest podcasts in the world.

So, there you have it. Readers are rational, have a wide perspective, are creative, have a great ability to focus, communicate ideas well, recover efficiently, and are informed. Of course, there is so much more to it than that but if that doesn’t convince you to read more, I don’t know what will.

That said, we’re in the middle of an Order of Man Readathon right now. If you head to my Instagram profile, you can see what we’re up to. Until May 24th, 2018, you can post a book you’ve completed between now and then and use the hashtag #OOMreadathon and tag me @ryanmichler and you’ll automatically be entered in to receive a book bundle I’m going to be giving away the end of May. And, the more people you tag during our readathon, the more chances you’ll have to win a book bundle. Again, head to www.instagram.com/ryanmichler, post a book as you finish it for the next 30 days, use the hashtag #OOMreadathon, and tag your friends for our bhttp://www.orderofman.com/leaders-are-readers/ook giveaway.