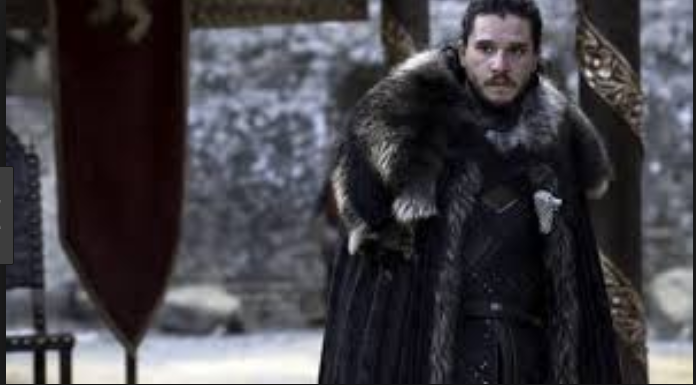 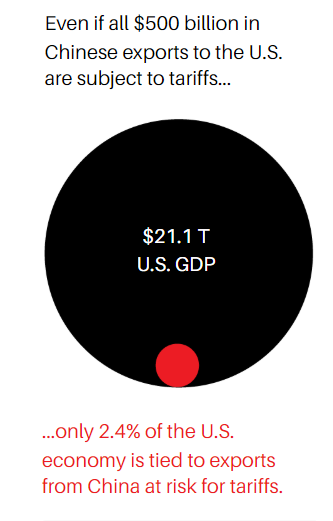 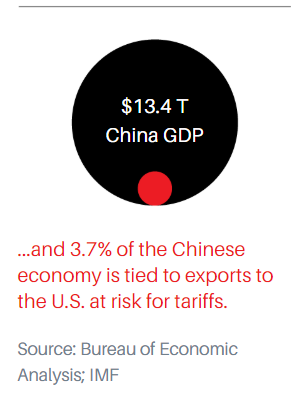 The Trade War Will Make Stocks Scary. 5 Reasons Not to Panic.  By Reshma Kapadia 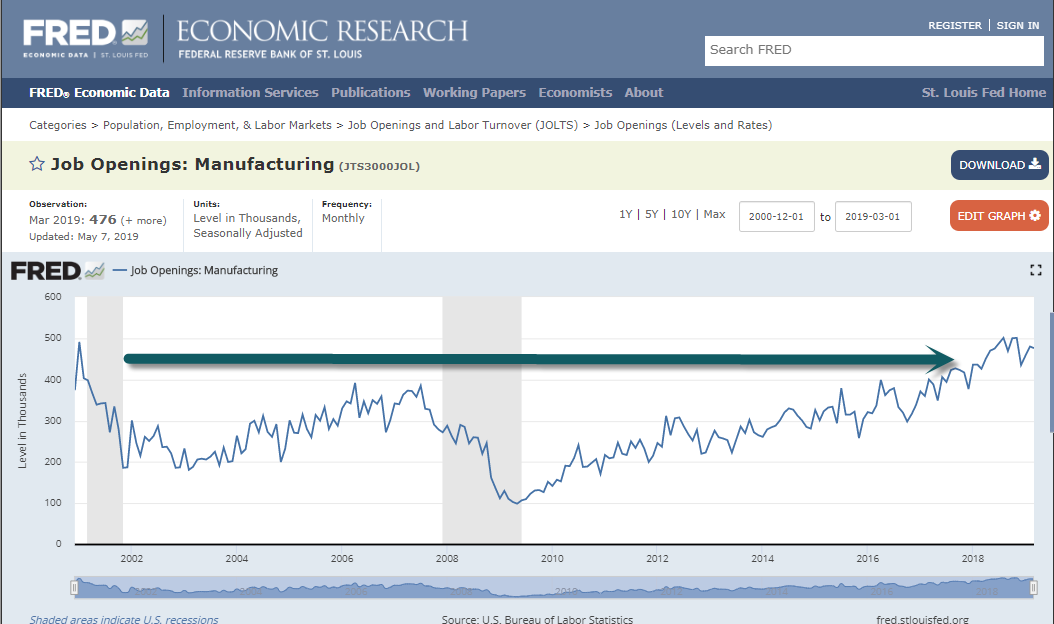 Warehouse operators stepped up hiring in April as e-commerce demand drove up employment in distribution centers even as job growth across the rest of the freight-transportation sector slowed.

Warehousing and storage companies added 5,400 jobs last month, according to preliminary figures the Labor Department reported Friday, the fourth straight month of growth in a sector that includes fulfillment centers that process and ship online orders. The sector added nearly 70,000 jobs over the past 12 months.

After a strong slate of economic data on Thursday, today’s data continued the positive trend with a much stronger than expected sentiment report from the University of Michigan where the headline index came in at its highest level since January 2004.  While economists were forecasting the index to come in at a level of 97.2, the actual reading was much stronger at 102.4. That beat relative to expectations was the biggest since October 2017. The big driver of this month’s strength was the fact that the expectations component surged 8.6 points to 96.0 from 87.4.  Over the last few years, the expectations component of the UMich Sentiment report has tried unsuccessfully to break above 90, but this month it blew right through that level to the highest levels of the current economic cycle. 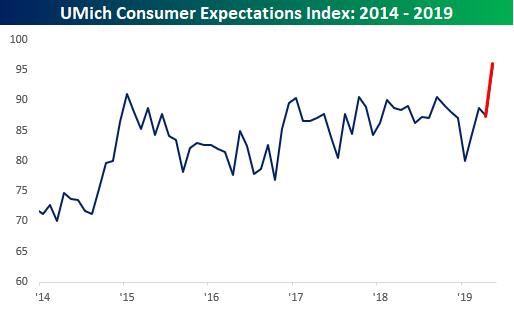 Not only did the expectations component make new highs relative to the last few years, but it’s also at levels not seen in over 15 years.  The fact that this index is making new highs is an encouraging one as it indicates confidence about the future, and with the number of Americans feeling like they are living ‘paycheck to paycheck‘ at multi-year lows, how can you blame them? 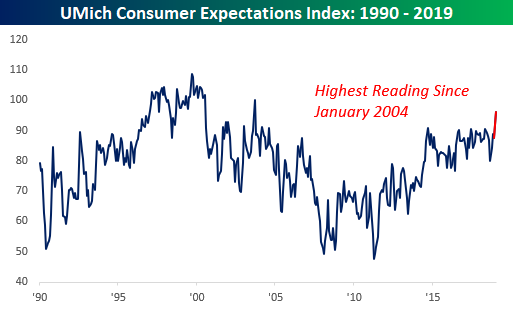 4.Euro Area Inflation Falls Back Below 1% 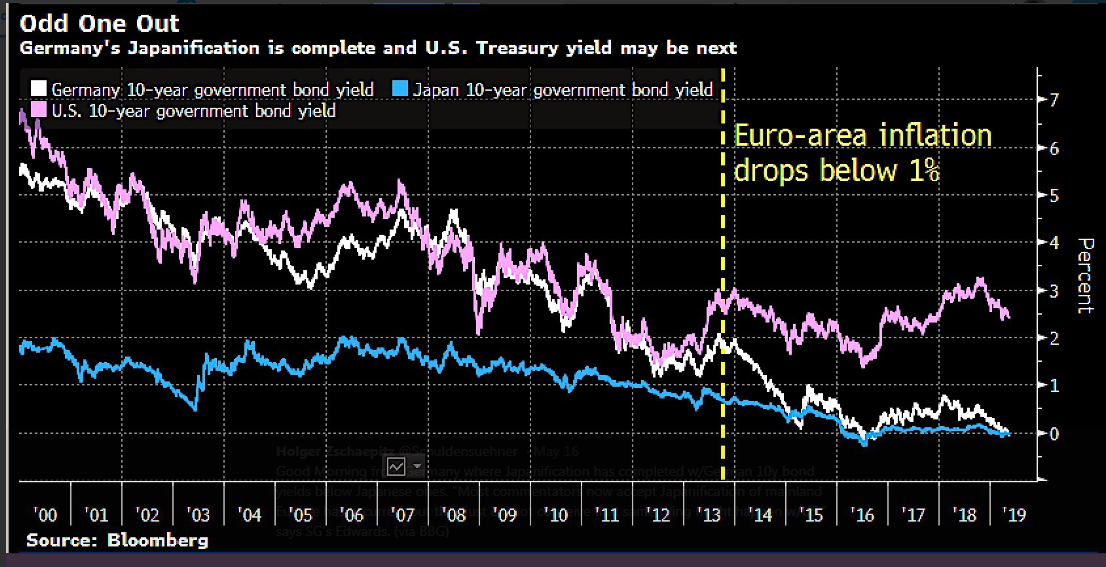 5.Interesting Follow Up to Last Week’s Data on China Selling Treasuries…Japan is Buying.

According to the U.S. Treasury, China has cut its holding of U.S. Treasury securities to a 22-month low, potentially in retaliation as the trade dispute lingers. “What isn’t discussed as much, though, is that global demand remains strong, with foreign ownership of U.S. debt hitting a record high last month,” added Detrick.

As our LPL Chart of the Day shows, China has been decreasing how much U.S. debt it holds, while Japan has silently increased its holdings for five consecutive months. 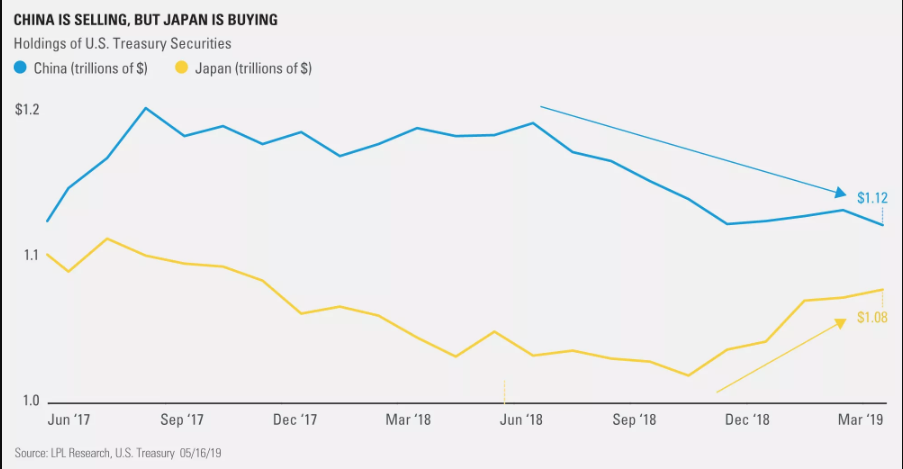 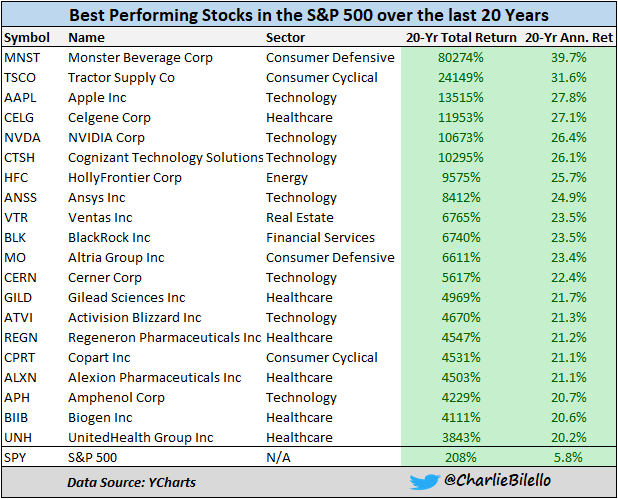 E-Commerce Crushes Mall Retailers One by One. Here’s the Data

Brick-and-mortar department stores – the lucky ones still open – are on schedule to be toast.

E-commerce includes sales by the online operations of brick-and-mortar retailers. The top ones have huge and thriving online operations: Walmart, Home Depot, BestBuy, and Macy’s in that order are the fourth through seventh largest e-commerce sites in the US, behind Amazon, eBay, and Apple.

So this is the business Macy’s brick-and-mortar stores are in: 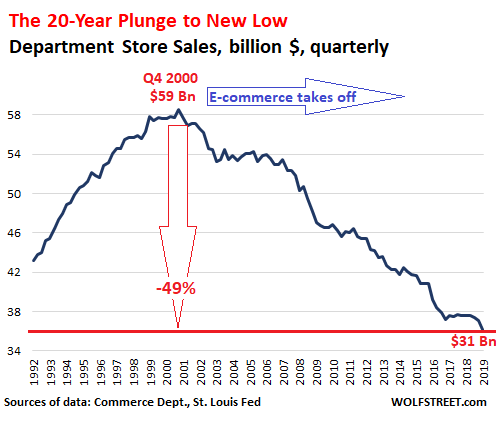 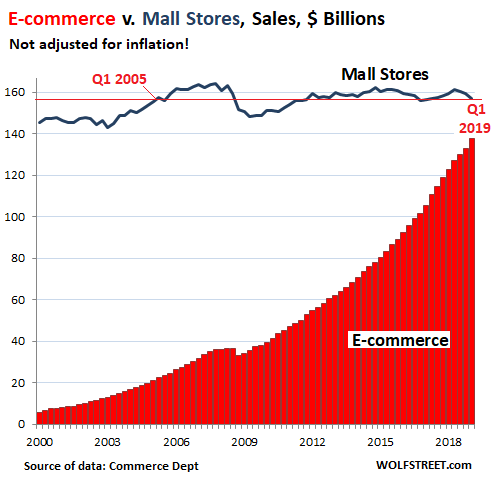 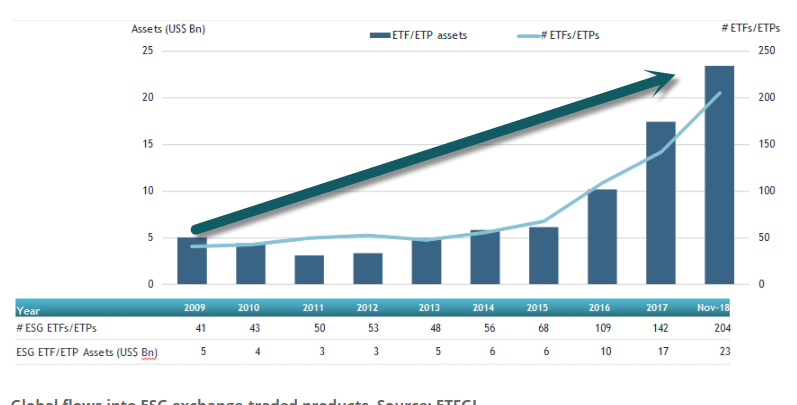 The iShares ESG MSCI USA Leaders fund (ticker: SUSL) had a blockbuster debut, but it will take many more like it for socially conscious investing to really become a force in the ETF mainstream. Indeed, it seems likely that these funds probably won’t account for even 1.5% of ETFs’ total asset pie by 2023.

An ETF Sees a Blockbuster Debut. Don’t Get Too Excited. Crystal Kim
https://www.barrons.com/articles/blackrock-esg-etf-51558124653?mod=past_editions

(Observer) Warren Buffett’s investment conglomerate, Berkshire Hathaway, took a $377 million hit in the first quarter of 2019 due to prior years’ investments in a group of funds run by a company that’s now believed to be a Ponzi scheme.

Between 2015 to 2018, Berkshire Hathaway invested a total of $340 million in tax-credit investment funds sponsored by a California-based clean energy company called DC Solar.

“In December 2018 and during the first quarter of 2019, we learned of allegations by federal authorities of fraudulent income conduct by the sponsor of these funds,” Berkshire Hathaway said in its first-quarter financial report. “As a result of our investigation into these allegations, we now believe that it is more likely than not that the income tax benefits that we recognized are not valid.”

Buffett’s secretary, Debbie Bosanek, confirmed to Bloomberg this week that the funds mentioned in the regulatory filing were related to DC Solar.

Founded in 2008, DC Solar touted its ability to provide “very favorable tax consequences” to investors, which turned out to be a lie. The company filed for bankruptcy in February after the FBI and IRS raided its headquarter in Benicia, Calif., in December of last year.

The FBI alleged that the company had been using money from new investors to pay old investors who had leases for the company’s solar-generation equipment.

Authorities determined that DC Solar had sponsored fraudulent funds that totaled $810 million. Other victims included insurer Progressive, which recorded a $156 million loss in the first quarter, and Southern Californian bank East West Bancorp., which took a $7 million hit in Q1.

10.Your Brain Is a Liar: 7 Common Cons Your Brain Uses

Tips for reframing thoughts you can use with your children.

Your brain is a liar. It makes assumptions not rooted in fact, draws conclusions that are more about fear than any kind of logical argument, and has insights often manipulated by the media and others’ compelling stories. Researchers have known for years that memories are not a good source of information4. Why? Because your brain is an unreliable narrator. It doesn’t understand truth as we often define it—aligning with fact or reality. Instead, it functions on personal truth: facts and reality that sifts through the filter of our personal biases and perceptions about the world. This “truth” is also subject to the cognition errors we make daily3.

Often defined as “Automatic Negative Thoughts,” or A.N.T.s, the brain will frequently engage in a series of negative thoughts. These thoughts often lock you into a thinking pattern that creates stress and anxiety and prevents growth1. One of the reasons this happens is the brain’s need to maintain the status quo as a survival mechanism. But in locking your thinking, you resist growth opportunities2. I call this thinking “cons.” It is your brain’s way of convincing you that partial or untrue statements are truth. It is how your mind lies to you. Cognition errors, as they are also called in mental healthcircles, can deepen patterns of depression and make mood disorders more challenging to manage.

The following seven cons are some of the most typical ways your brain lies to you3. Which ones can you see in yourself or in your loved ones?