Historically, I am not sure if the S&P witnessed $20 earnings jump in one quarter…Let me know if someone has long-term data. 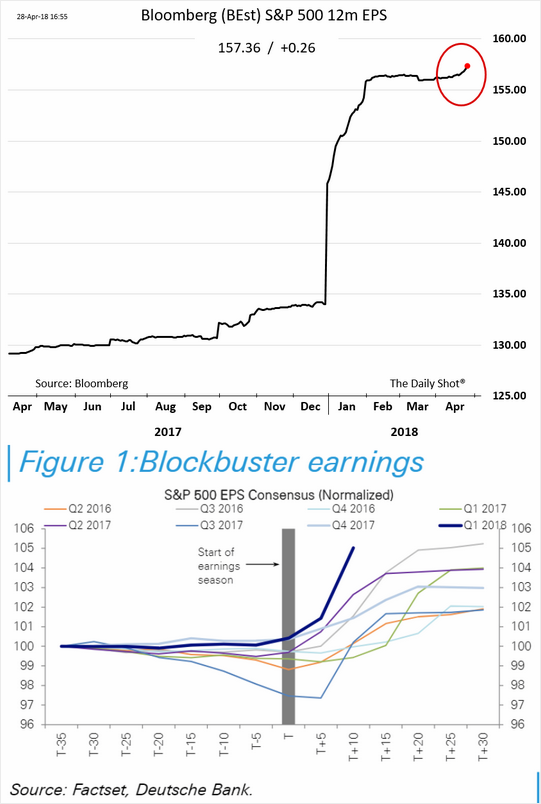 2.China’s Economy Surpassed the U.S. in Size But They are Only 3.5% of MSCI All Country World Index.

While China appears to be ascending into world superpower status in the coming decades, a $100 investment in “global” equities allocates just $3.51 to the country, if we track an index like the MSCI All Country World (ACWI).1 That seems remarkably low for a country that is going head-to-head with the U.S. on the global stage.

It was only last year that MSCI announced it would be adding Chinese A-shares, companies listed in Shanghai and Shenzhen, to its MSCI Emerging Markets Index. That is late for an economy whose size surpassed the U.S. in 2014, at least on a purchasing power parity basis (see chart below).

This was the single biggest quarterly amount of debt sold by the US Treasury since the record $569BN in debt borrowed in Q4 2008 when the financial system nearly collapsed, and Treasury had no choice but to raise a gargantuan amount of money during the biggest financial crisis in modern US history. 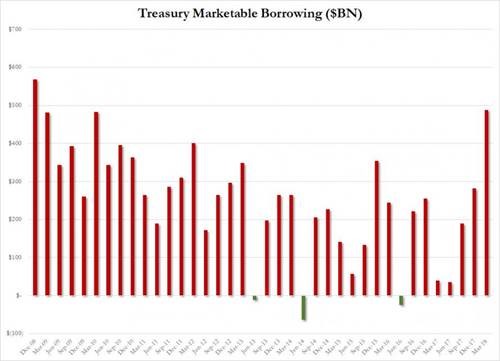 4-5.Staples and Utilities Starting to Trade at Traditional Discount to Market.

The return of relative value to defensive stocks

For most of the post-crisis period, defensive stocks have been expensive. Russ suggests that may have changed.

Recently, classic defensive stocks such as consumer staples and utilities have not lived up to their reputation. U.S. stocks are flat year-to-date and have experienced a meaningful increase in volatility, but defensive stocks have offered little protection: Utilities and staples are down 4.5% and 8.5% respectively year-to-date.

To some extent, weakness in these two sectors makes sense. Both are classic dividend plays, and accordingly sensitive to higher rates. As the yield on the 10-year Treasury has climbed towards 3% —a four-year high—you would expect these sectors to under-perform. However, the magnitude of the out-performance is worth noting. Given how much these sectors have trailed the broader market, for the first time in years valuations are starting to look reasonable.

Low beta companies, i.e. those less risky than the market at large, particularly those owned primarily for their dividends, have generally been sensitive to interest rates. As bond yields rise, investors are less incentivized to own a dividend paying stock versus a safer bond. This is why the relative valuations of these stocks tend to fall as rates rise.

This relationship has grown even stronger in the post-crisis, yield starved environment. Since 2010, the level of the 10-year Treasury yield has explained approximately 45% of the variation in the relative valuation – defined as the valuation of the sector versus the broader market – for the utilities sector. For the consumer staples sector the relationship explains approximately 63% (see Chart). This relationship goes a long way towards explaining why both sectors have performed so poorly of late. 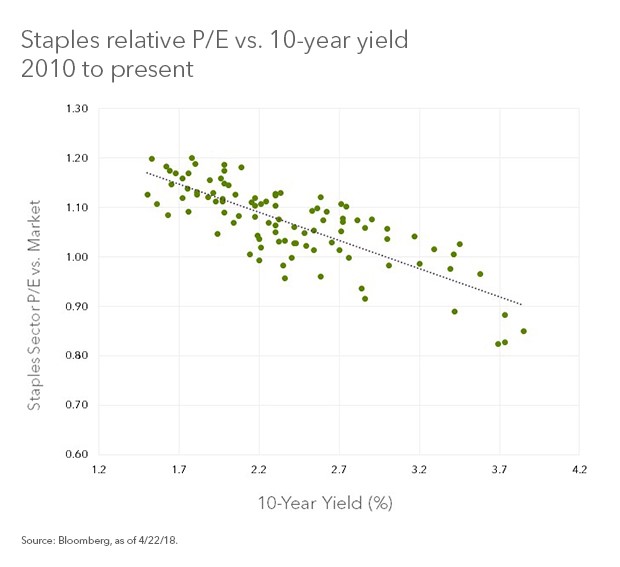 However, given the degree of the recent under-performance, for the first time in a long time both sectors are starting to look reasonably priced. U.S. utility stocks trade at approximately a 20% discount to the market. Based on the historical relationship between rates and relative multiples, this looks about right. In contrast, for much of the post-crisis environment utility companies looked perpetually over-priced.

Staples evidence a similar pattern. Large-cap consumer staples companies are trading at an 11% discount to the S&P 500.  This represents the cheapest relative valuation the sector has possessed since 2010. More interestingly, even after adjusting for the recent backup in rates, staples appear on the cheap side. The sector is trading at around an 8% discount to what long-term rates would suggest is fair value. While not a particularly large discount, it has been years since the sector appeared under- valued based on this metric.

Obviously, other factors matter; recent weakness is not simply a function of interest rates. In the case of consumer staples, declining brand value and the fragmentation of the consumer space have contributed to the sector’s under-performance.

That said, given higher volatility and justifiable concerns about lofty market multiples, investors can be forgiven for exercising some caution with their portfolios. Interestingly, just as investors are rediscovering the value of playing defense, one of the classic ways to play that theme is starting to look more reasonable.

Russ Koesterich, CFA, is Portfolio Manager for BlackRock’s Global Allocation team and is a regular contributor to The Blog.

6.REIT Sell Off On Rising Rates Now Trading at Discount to Asset Values.

The love-hate situation is driven by two main factors. Investors have sold REITs because of rising interest rates, which have left their yields less attractive. Meanwhile, investors also have been pouring cash into private equity, hedge funds and other alternative investments on the belief they will outperform public markets. 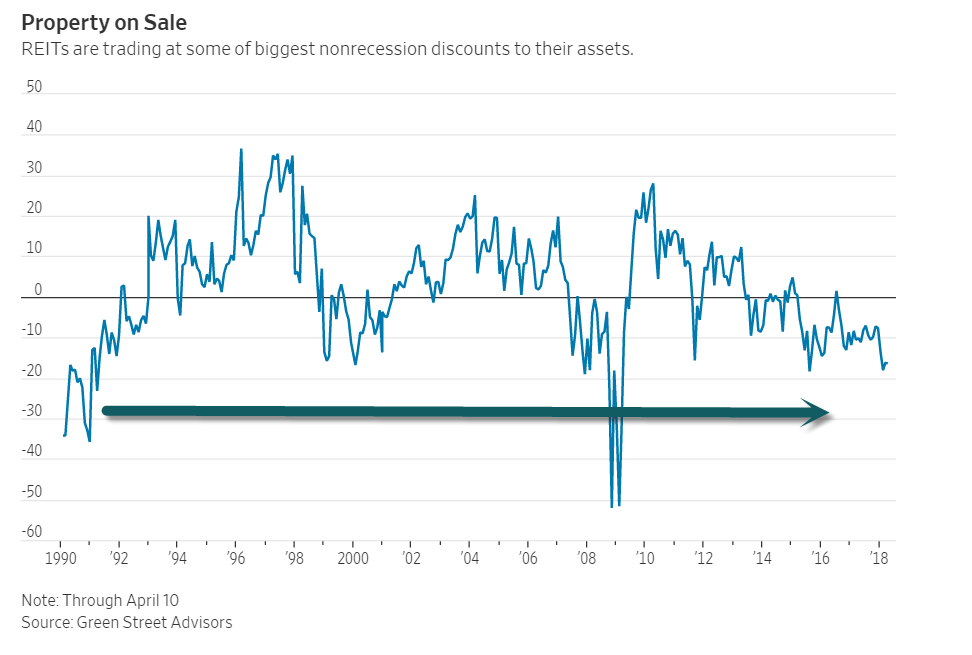 Real Estate Stocks Are on Sale but No One Is Buying

Listed property companies are trading at discounts to their assets, yet investors are pouring cash into private funds 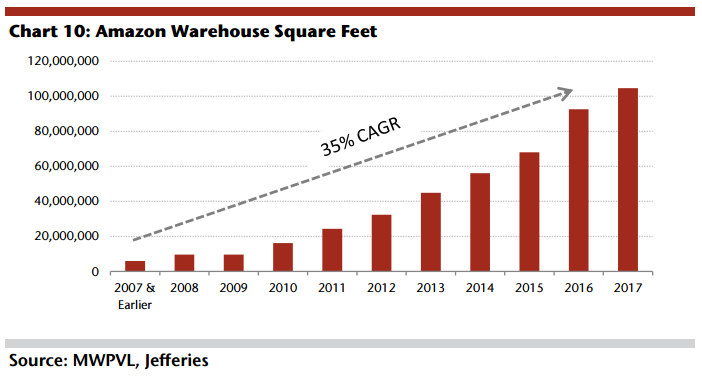 Warehouses Are ‘Getting Too Exciting’ in E-Commerce Age, Zell Says

Investor interest in building and acquiring warehouses in the age of Amazon.com Inc. is overheating, and there might be more distribution centers created than there will be tenants to fill them, billionaire Sam Zell said.

“My guess is it is getting too exciting and we are building too much industrial space,” Zell said Monday in a Bloomberg Television interview from the Milken Institute Global Conference in Beverly Hills, California.

E-commerce is reconfiguring supply chains and shaping the fortunes of U.S. industrial landlords, especially near larger cities, where online shopping is most popular. Real estate investment trusts that lease out space at warehouses and logistics centers have been outperforming those that focus on malls, rental apartments or office buildings.

Zell, chairman and founder of Chicago-based Equity Group Investments, made his comments on the day after Prologis Inc., the world’s largest warehouse owner, agreed to acquire rival DCT Industrial Trust Inc. for $8.4 billion in stock and assumed debt. Zell’s Equity International has invested in warehouse owners and developers in Asia, Mexico and Brazil, according to the firm’s website.

— With assistance by Erik Schatzker
https://www.bloomberg.com/news/articles/2018-04-30/warehouses-getting-too-exciting-in-e-commerce-age-zell-says 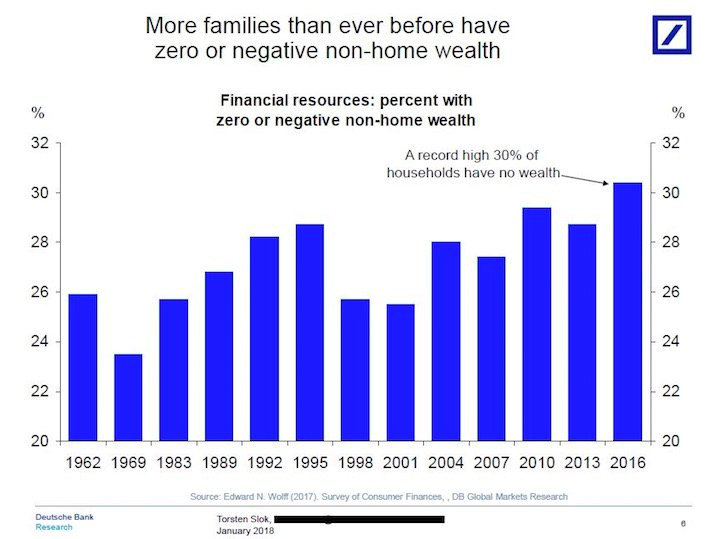 Well, yeah. Small businesses (those with fewer than 500 employees) account for…

And here’s our favorite stat: 98.5% of all employers in high-tech industries are small businesses. Innovation comes in all shapes and sizes.

And what about young people? Well, we’re not creating as many small businesses as generations past. The rate of self-employment among people age 15-34 has been steadily dropping since 1990.

(Yes, that’s a not-so-subtle hint to pull the trigger on that $1 billion idea floating in your head.) 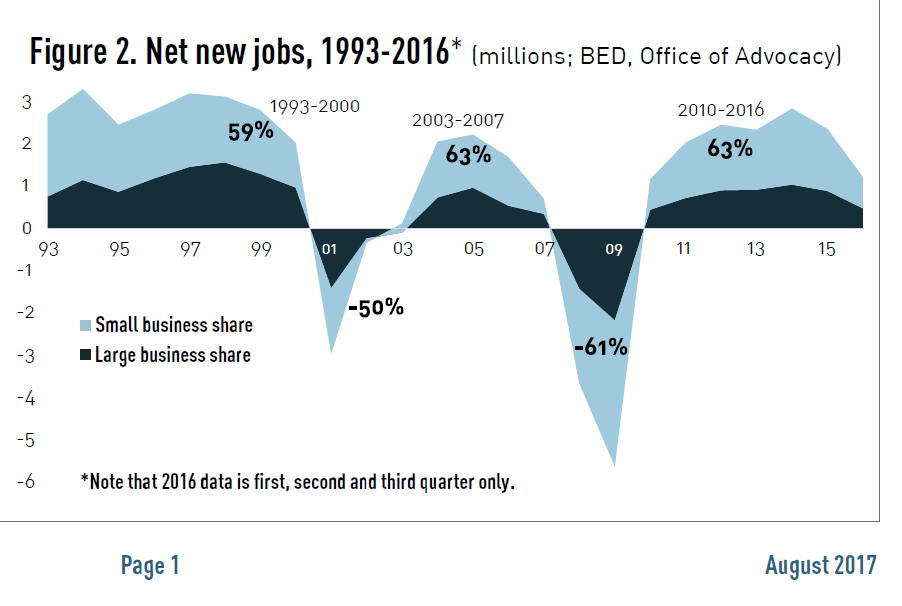 10.Jeff Bezos says his advice to Amazon interns and execs is to stop aiming for work-life ‘balance’ — here’s what you should strive for instead

Bezos believes that his new hires should stop attempting to achieve “balance” within their professional and personal lives, since that implies a strict trade-off between the two. Instead, Bezos envisions a more holistic relationship between work and life outside the office.

Historically, the world’s richest man has a nontraditional approach to work: He makes time for breakfast every morning with his family, doesn’t set his alarm before going to bed, schedules surprisingly few meetings, and still sets aside a few minutes every day to wash his own dishes.

This counterintuitive approach to maintaining a healthy symmetry within his professional and personal pursuits is one of the chief pieces of advice Bezos offers his staff.

“This work-life harmony thing is what I try to teach young employees and actually senior executives at Amazon too. But especially the people coming in,” he said. “I get asked about work-life balance all the time. And my view is, that’s a debilitating phrase because it implies there’s a strict trade-off.”

Instead of viewing work and life as a balancing act, Bezos said that it’s more productive to view them as two integrated parts.

“It actually is a circle. It’s not a balance,” Bezos said.

Bezos said that the relationship between his work life and personal life is reciprocal, and that he doesn’t compartmentalize them into two competing time constraints.