We have actually been blessed by this decline in interest rates in the United States. In 2000, the total interest cost of servicing the federal debt was $360 billion, based on a blended interest rate on government bonds of 6%. Today, the blended interest rate is 2.1% and the total interest cost is $400 billion, only $40 billion more on a debt burden three times the size of its 2000 level. If interest rates on government securities rise 1%, the cost of debt service would increase almost $200 billion, offsetting most of the budget cuts being proposed by the Trump administration
Byron Wien Full Read Below
http://www.barrons.com/articles/byron-wien-the-scary-signal-of-the-bond-market-1493417352 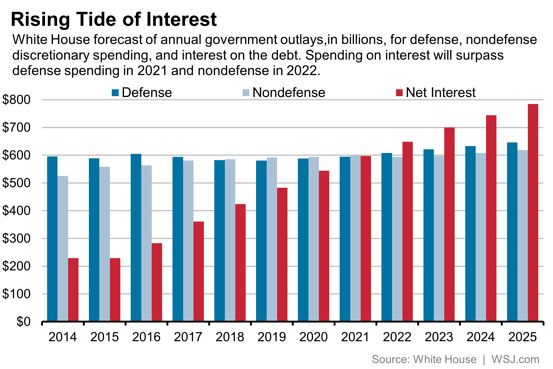 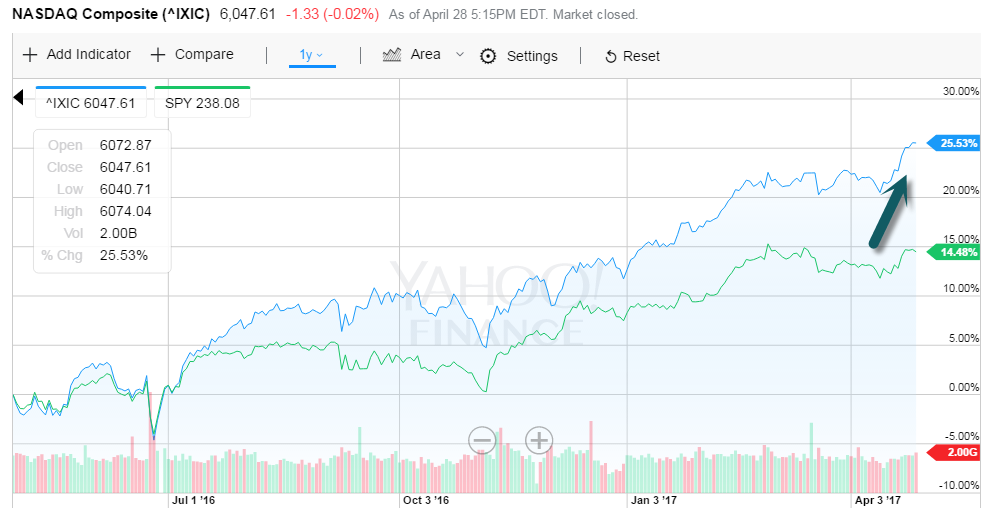 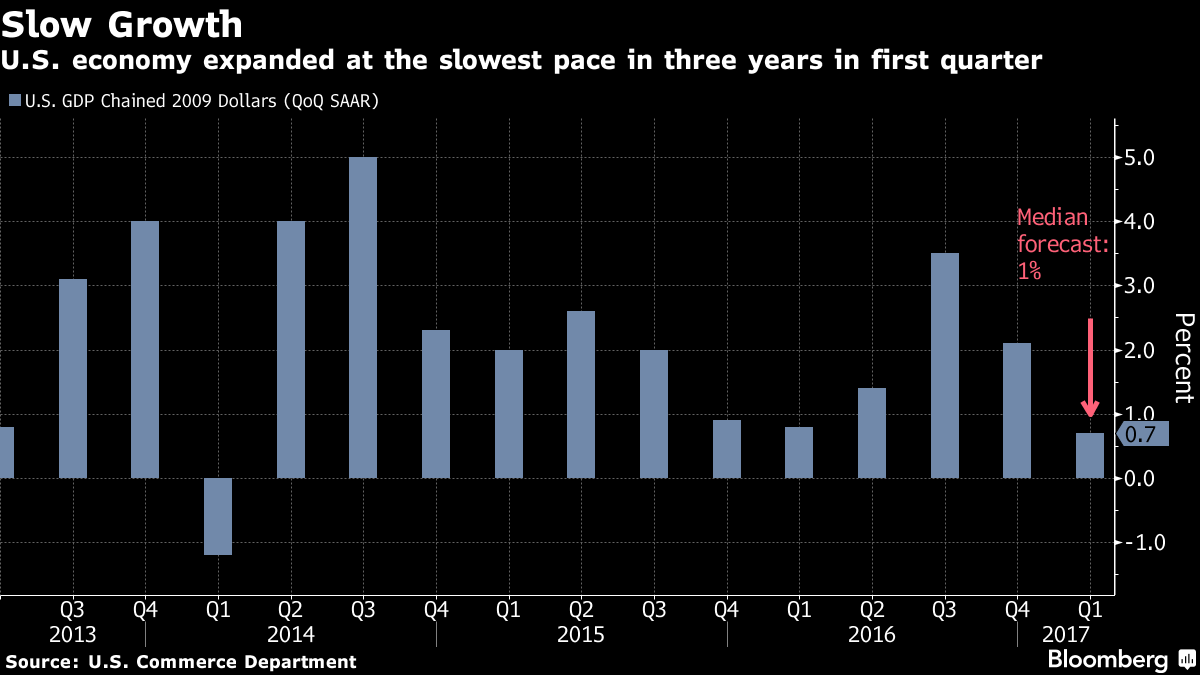 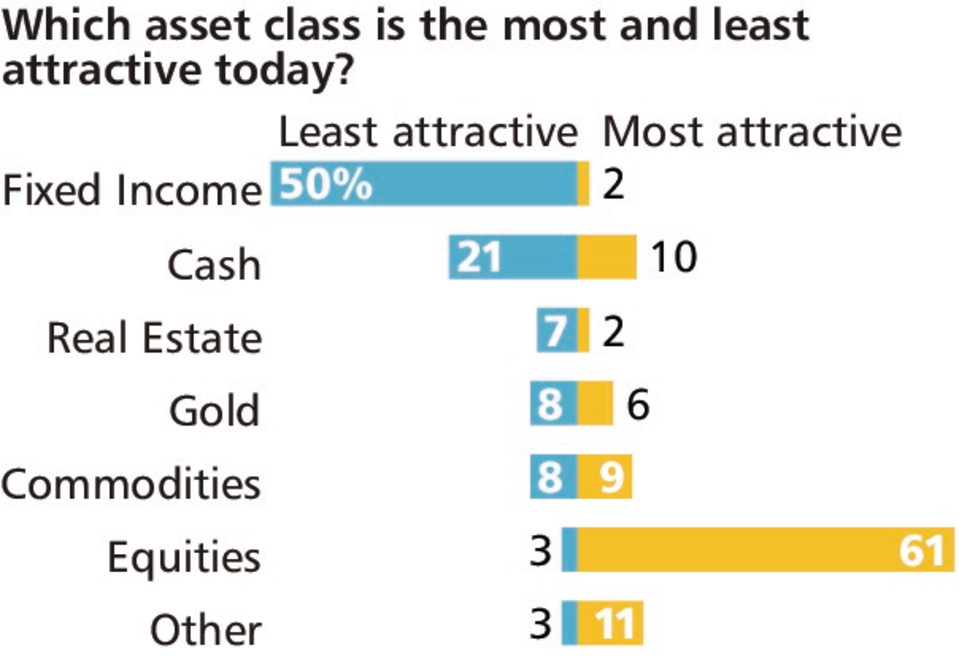 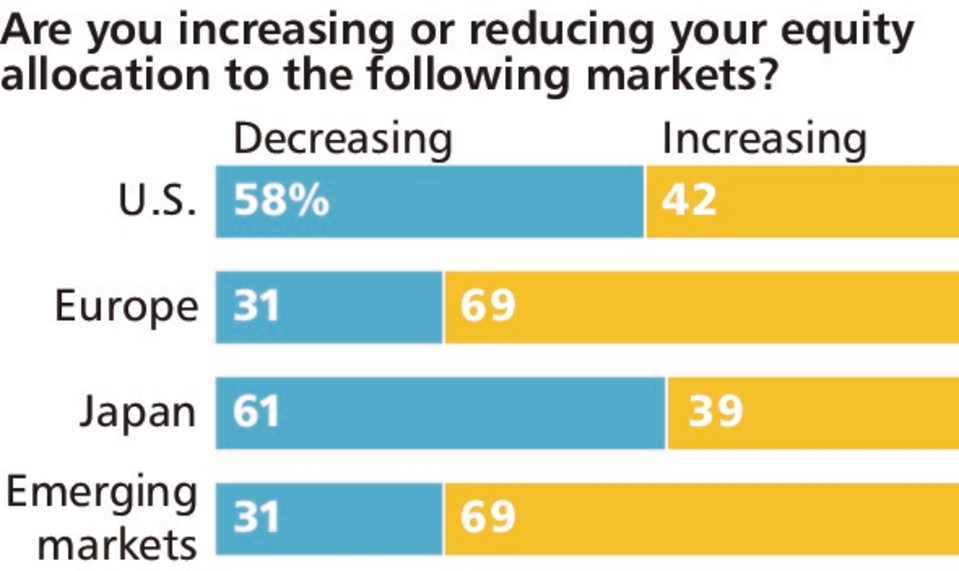 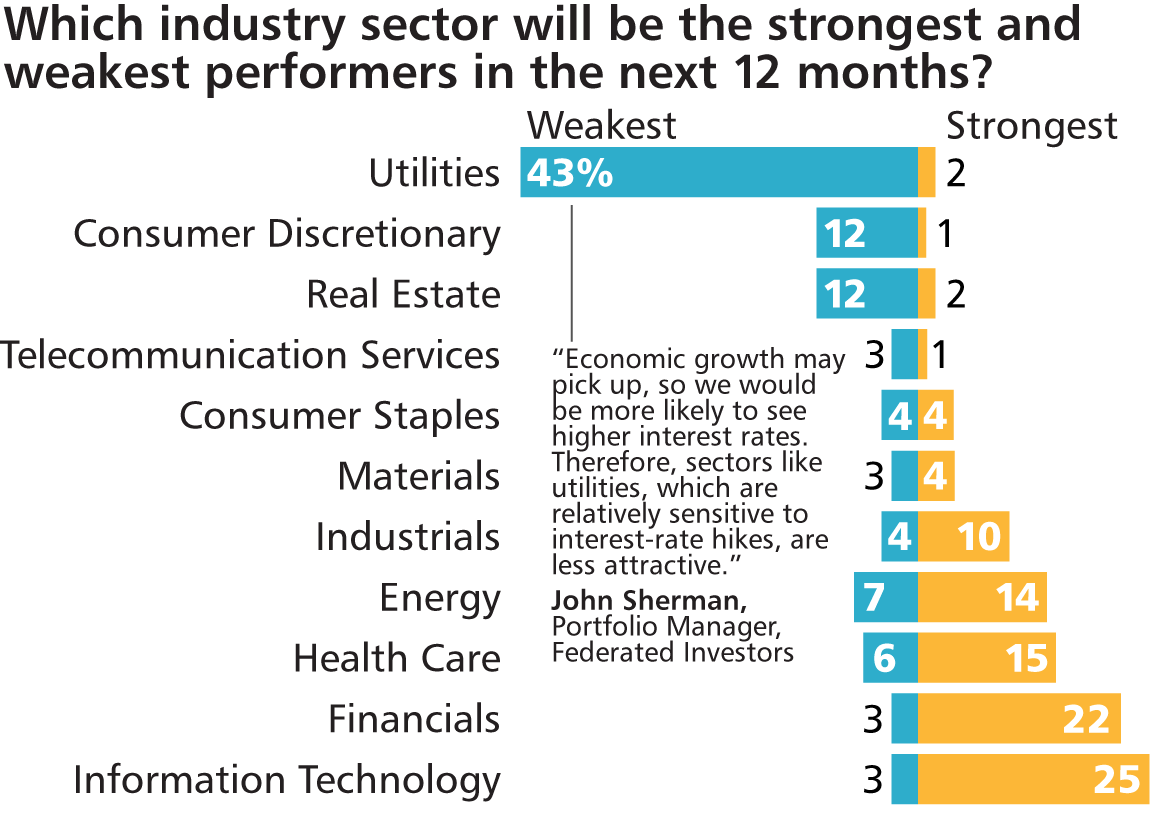 5.Reversion to Mean for European Equities??

Investing in Europe: Where’s the Return?
By Michael Batnick, CFA
US investors aren’t too fond of European stocks these days and for good reason.

If you diversified across the Atlantic — the equivalent of eating your peas and carrots — you would have received zero over the past decade.

Not only have European stocks stagnated, they have experienced a gut-wrenching 66% drawdown (Vanguard’s FTSE Europe ETF), putting them squarely in the reward-free risk category. To add insult to injury, the opportunity cost would have been enormous, as US stocks doubled over the same period.
Understandably, US investors are retreating from European equities.

For just the third time in the last 50 years, US stocks have outperformed MSCI Europe by 100% over the previous 10 years.
The chart below plots the rolling 10-year performance difference between these two regions. The blue line indicates when European equities have outperformed over the previous 10 years, while the red line shows when US stocks have come out ahead. The green line highlights when US equities outpaced their European counterparts to the extremes that they have today. In the 44 previous readings when the spreads reached 100%, European stocks went on to outperform for the subsequent 10 years.

Now to be fair, past performance is irrelevant, and when N=2, well, yeah.

Outperformance: European vs. US Equities 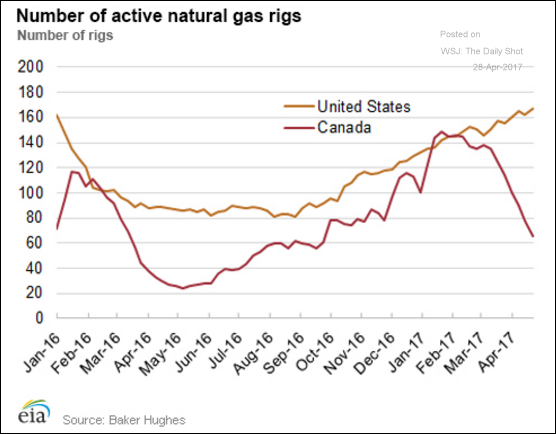 Where does US natural gas come from? Here is the breakdown. 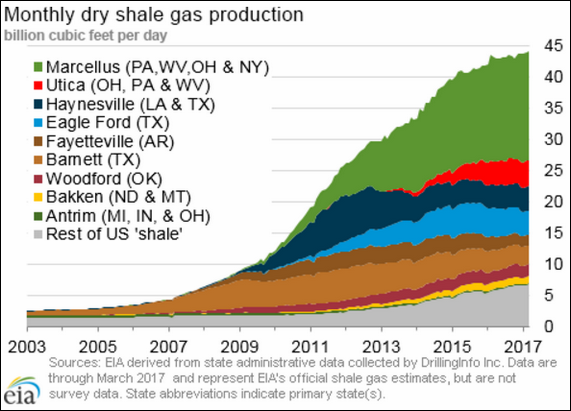 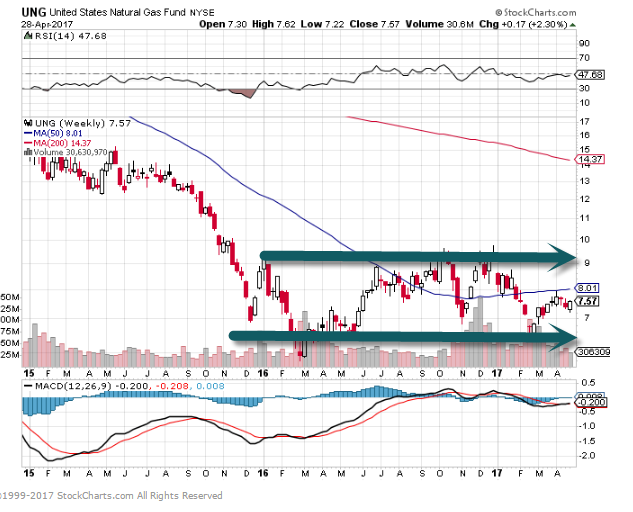 CoreLogic Sees Signs of Credit Cracks
Decrease Font SizeTextIncrease Font Size
Apr 28 2017, 9:24AM
Here we go again?
Sam Khater, CoreLogic’s deputy chief economist, says loan performance is beginning to show some cracks in what has been a near perfect veneer. This might be an early signal of a downturn in the credit cycle. Khater is not issuing a warning, merely alerting those who should be watching such things to pay attention.
He writes, in an article in the CoreLogic Insights blog, that a typical economic expansion and recession are strongly driven by loan performance. When times are good, lenders take on more marginal borrowers then tend to become more conservative when loan performance begins to deteriorate. That often exacerbates an economic downturn. 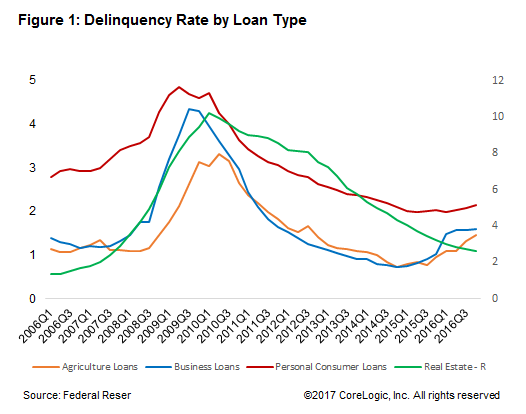 Loan performance across the four major types of loans (agricultural, business, personal consumption, and real estate) all improved throughout the first five years of the expansion. Then, over the last year, performance of the first three loan types began to slip. Real estate loans bucked the trend, continuing to improve. Now, Khater says, there are small signs that their pristine levels of performance could be deteriorating.
Mortgage performance is typical measured by levels of delinquency and foreclosure but those, Khater says, are both backward looking and lag as indicators. One way to address that is through transition rate analysis. This method controls for time by looking, in the case of his analysis, at loan vintage, i.e. production within a given year, which he says, allows for a much more nuanced view of performance.
By focusing on only those loans produced in the first 10 months of each year in question allowed Khater to include 2016 data in his analysis. His justification for the short and early time frame is that historically the first six to nine months of a loan’s performance have a very strong persistence, and loans tend to remain on a similar track years later. He starts his analysis with 2010 as the first full year of the expansion vintages and says underwriting has remained roughly similar since then.
He sees three trends emerging from his analysis of these six vintages. The loans originated in 2016 were the first where the serious delinquency rate after 10 months was higher than in the previous year. Second, there is clear clustering in those years when the economy was weaker compared with the other economies. The first two years, when the economy was still recoverying and falling home prices had not yet turned the corner, loans had a 0.32 serious delinqeucy rate compared to 2012 through 2014 where the rate averaged 0.21 percent. Then in 2015, with the economy recovering, job creation picking up and home prices flying, the loans originated that year had the lowest serious deliquency rate in two decades, 0.13 percent. 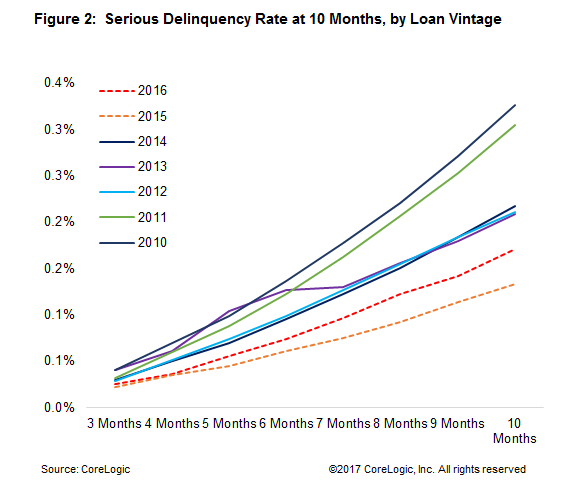 Last year economic growth slowed a full percentage point and Khater says, “affordability cracks began to show. The serious delinquency rate for the 2016 vintage worsened, rising to 0.17 percent at the 10-month mark. Granted, this is a modest increase, and performance is still very good when compared to that over the last 20 years, still that is a show of some weakness.”
Khater concludes, “Historically, when the mortgage credit cycle begins to deteriorate it continues to do so until the economy bottoms and the credit cycle begins to improve again. While the deterioration in mortgage performance is very small and rising from very low levels, it is important to track because turning points are critical but difficult to identify in real time.”
http://www.mortgagenewsdaily.com/04282017_corelogic_loan_performance.asp

8.Research Estimates that 85% of the 7 Million Manufacturing Jobs Lost Over the Past Four Decades Has Been Due to Technology Not Overseas Trade. 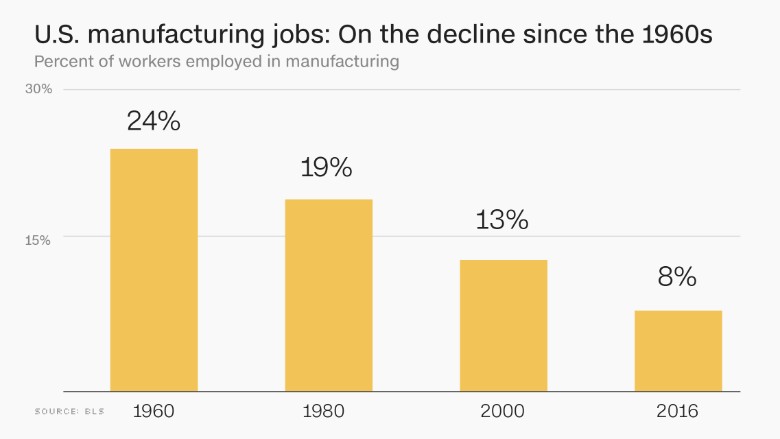 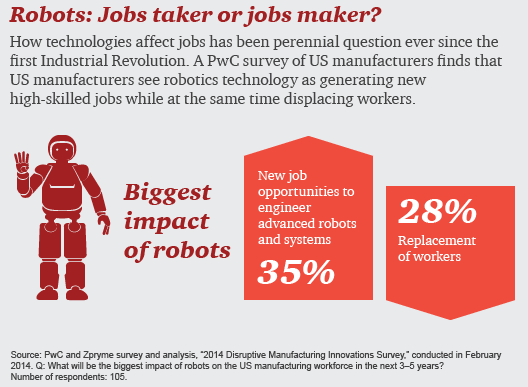 NEW YORK — When Comcast Corp. bought NBCUniversal in 2011, the deal came with the CNBC channel, which pioneered the business news format on cable television and dominated ratings in its field.
It doesn’t look as unassailable today, as rival Fox Business Network flogs its coverage of President Trump and adds tens of thousands of viewers.

The Fox cable network — launched a decade ago, and known for publicity stunts such as simulcasting radio shock jock Don Imus — has beaten CNBC in total viewers during the key daytime stock-market hours over the last two quarters. 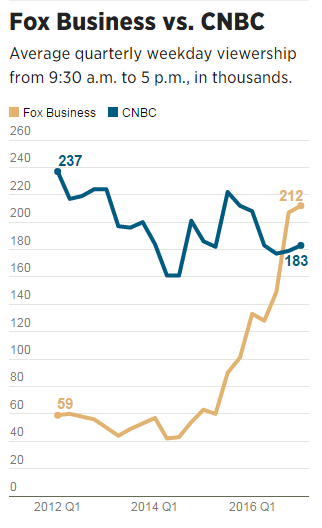 10. 10 Things Successful People Do to Solve Their Daily Problems

This guru of positive thinking offers 10 classic and timeless strategies to boost your problem-solving abilities.

I’m a big fan of the positive psychology movement, which has gifted us with profound research on producing happiness, optimism, and creativity in the workplace.
While current iconic figures from science and academia are moving positive psychology into the mainstream (think Shawn Achor, Martin Seligman, and Richard Davidson, to name a few), another leading proponent of “positive thinking” — Dr. Norman Vincent Peale — rose to fame in the 1950s when he wrote the classic The Power of Positive Thinking.
Peale’s timeless philosophy and teachings on positive thinking have been praised by presidents spanning seven decades, including Richard Nixon, Ronald Reagan, Bill Clinton, and yes, even Donald Trump.

Some of his ideas and techniques were controversial at the time, and he received frequent criticism both from church figures and from the psychiatric profession.

I dug into my own archives to find what Peale had to say about how we can best deal with our own problem-solving challenges. What happens when we’re stuck and can’t find a way forward? Or, what’s the starting point to having a game plan to tackle our biggest obstacles?

Here’s what I found from Peale’s book Six Attitudes for Winners, which is still very much applicable today.
How to Solve a Problem (Abbreviated Version)
1.Seeds. The way to start out in solving a problem is to entertain a solid belief that every problem has the seeds of its own solution. You can find the answer to your problem if you look deeply into the problem itself.
2. Calm. Remain calm. Uptightness can block the flow of thought power. Reduce stress and tension so your mind can operate efficiently and under control.
3. Assembling. In dealing with a problem, objectively assemble all of the facts and gather all the data.
4. Paper. Lay out all of the component parts of the problem on paper, so that you can see them in orderly coherence. This helps clarify your thinking by bringing the various factors of a problem into systematic order. When you can see clearly, you’ll be better able to think clearly.
5. Force. Never try to force an answer to a problem. Keep your mind relaxed and allow the solution to open up naturally and become clear. The danger in trying to force an answer is that you may be forcing what you want rather than what is right (emphasis mine).
6. Prayer. Subject your problem to intensive prayer. Believe and affirm that through divine guidance you will receive insights and mental illumination.
7. Counsel. Often we need help with a problem. It is valuable, therefore, to get wise counsel.
8. Intuition. There is a subtle quality of mental processes that may be described as intuition, or the feel and impression of the right thing to do.
9. Meditation. Let the problem free-float in your mind. Refrain from pressure, tension, or even timing. Simply allow it to subsist in unhurried mental activity. Your mind will therefore produce the answer when needed.
10. Creativity. Put your trust in the creative power of your mind to arrive at a proper answer through the process of thinking, praying, and affirming.