1.This Week is the Largest Supply of U.S. Debt Sales Ever.

A Big Test for BondsThis week’s planned $294 billion of U.S. debt sales — the largest slate of supply ever — point to “a volatile near-term path for the Treasury market,” according to Bank of Montreal. The auctions begin with Monday’s $30 billion two-year note sale, which will be the biggest since 2014. 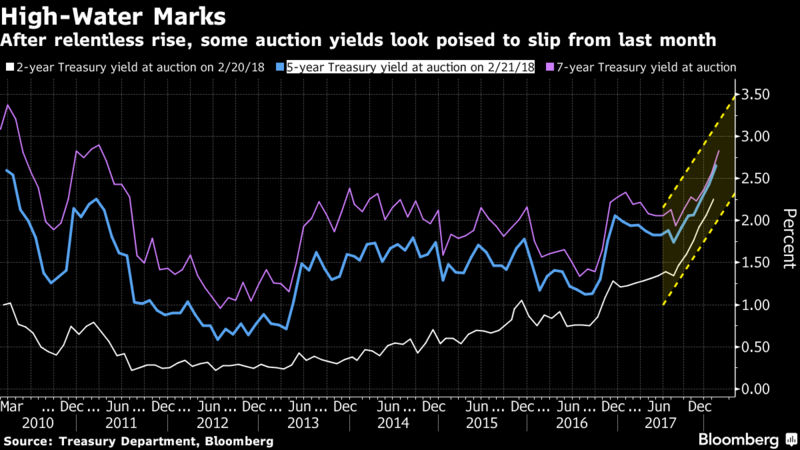 2.37% of Post Trump Election Market Cap has been Erased During Pullback. 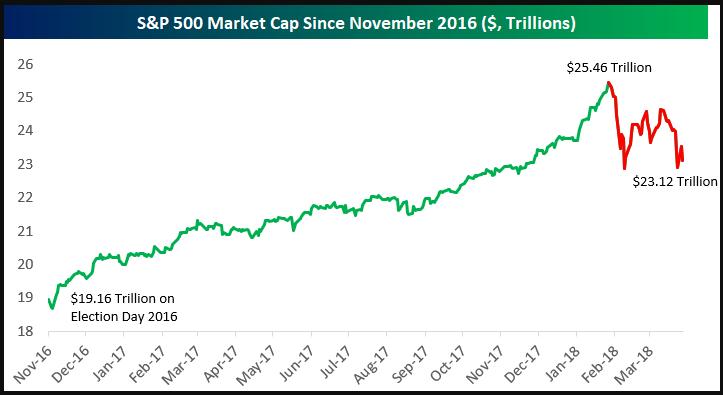 3.Is the Eurozone on Brink of Permanent Recovery or Becoming Japan?

The Eurozone: Is the Eurozone at risk of deflation as a result of a strong euro? Here is a comparison to Japan in the 1990s. 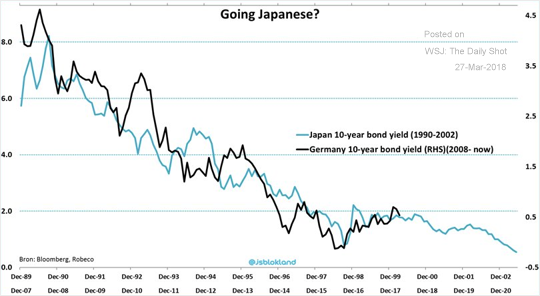 Another comparison chart I am watching closely…EEM vs. S&P ….Valuation discount in emerging markets but watching how it handles volatility.

5.Another Close Chart Watch…FANG vs. Market.  Tell for sector rotation?

Here’s another way of looking at how deep the rout was Tuesday. The NYSE FANG+ index — a gauge tracking 10 tech titans — suffered its biggest-ever drop in its short life (it was created in 2014), falling nearly 6%: 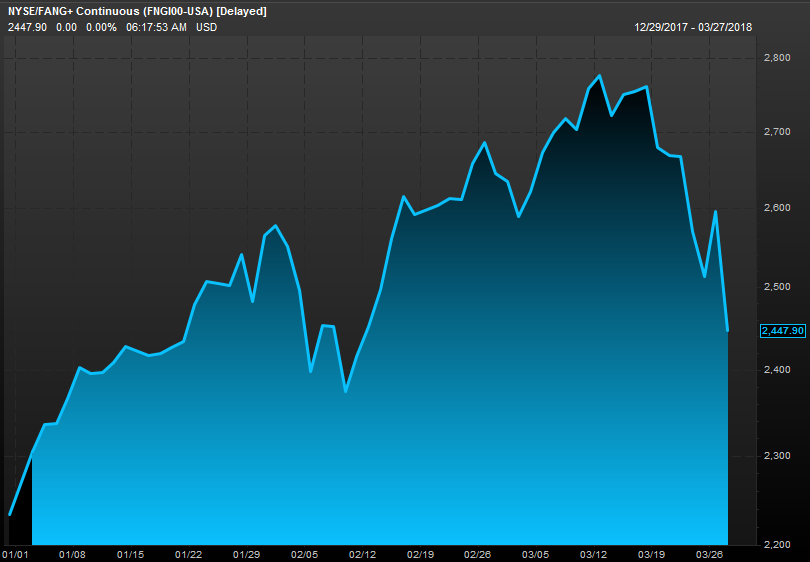 Here’s another look at that tough day for the FANG+ index: 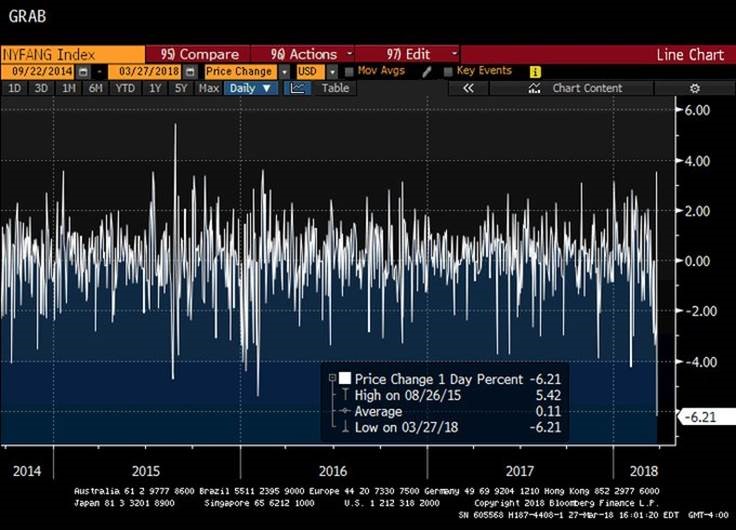 This chart shows the scary depths of the tech-sector rout 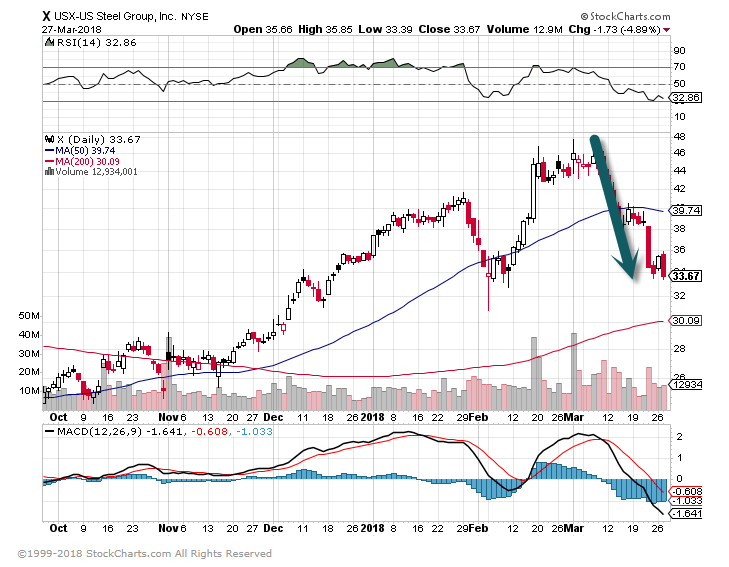 7.Global Trade as a Percentage of GDP.

The explosion of global trade 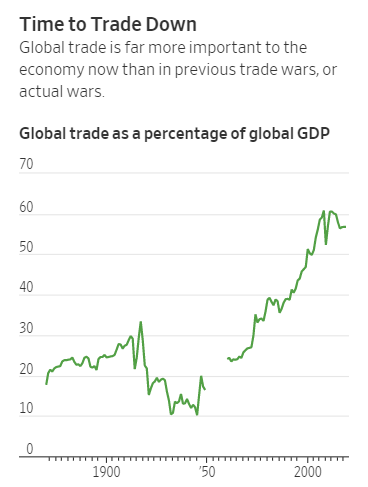 One important reason why the expansion since 2009 has been so weak is that wealth gains have been unevenly distributed, see chart below. A decline in the homeownership rate and the number of households holding stocks has dampened consumer spending growth for the bottom 90% of households. For more see also our inequality chart book here. 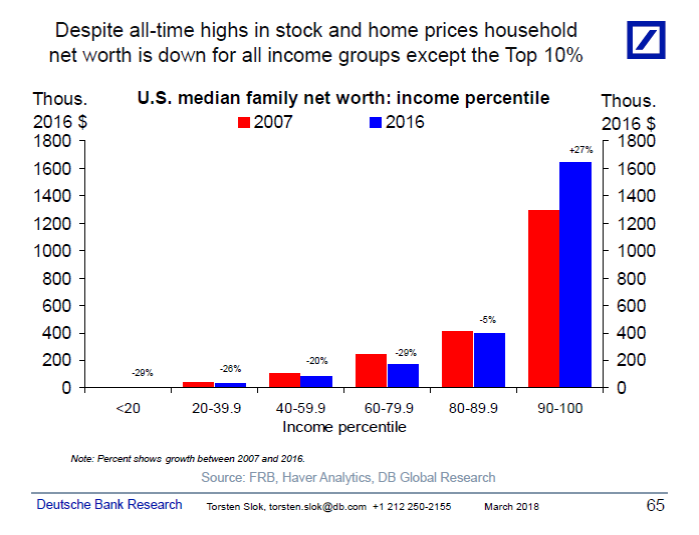 FILE PHOTO: Representations of the Ripple, Bitcoin, Etherum and Litecoin virtual currencies are seen on a PC motherboard in this illustration picture, February 13, 2018. REUTERS/Dado Ruvic/Illustration/File Photo

The new policy, which will be rolled out over the next 30 days, will also ban ads by cryptocurrency exchanges and cryptocurrency wallet services, unless they are public companies listed on certain major stock markets.

For Japan, these will be limited to crypto exchanges regulated by its national financial regulator, Twitter said.

The firm had said this month it was taking measures to prevent crypto-related accounts from “engaging with others in a deceptive manner”, but faced calls to go further after bans from Facebook Inc (FB.O) and Alphabet Inc’s (GOOGL.O) Google.

Facebook has restricted crypto-related adverts, while Google announced a ban that comes into force in June.

A man reads tweets on his phone in front of a displayed Twitter logo in Bordeaux, southwestern France, March 10, 2016. REUTERS/Regis Duvignau/Illustration/File Photo

The price of bitcoin, already 4 percent in the red on Monday, fell further after the Twitter announcement. It traded at $7,920 BTC=BTSP on the Luxembourg-based Bitstamp exchange at 1740 GMT, down more than 6 percent on the day.

10.Master These 5 Attributes to Successfully Influence Others

Ever wonder what it takes to command a room, influence perception or get a seat at the table?

However, no matter which individual variables you consider, they all point to the same thing: your ability to successfully wield influence through executive presence.

But what is executive presence, exactly?

Harrison Monarth, an expert in coaching high-level players in the art of perception management and author of Executive Presence: The Art of Commanding Respect Like a CEO, describes it as the ability to:

Harvard Business Review explains it this way: “Although executive presence is highly intuitive and difficult to pin down, it ultimately boils down to your ability to project mature self-confidence, a sense that you can take control of difficult, unpredictable situations; make tough decisions in a timely way and hold your own with other talented and strong-willed members of the executive team.”

No matter how you define “executive presence,” if you want to develop greater influence and in turn, greater personal and professional success, consider mastering the following key attributes:

If you seek to wield influence, take a hard look at the man or woman in the mirror and get clear on the value you bring to the table. Do you dabble or have you developed unqualified competence in area of expertise? Are you actively leveraging your skill set and knowledge base for the benefit of others? If so, is that benefit recognized, respected and touted by your peers? It isn’t enough to reside in your own head; your contributions must be palpable and held in high regard by others.

When American business magnate, investor and philanthropist Warren Buffett enters a room, there is zero question about his ability to deliver on the promise of results. He knows his stuff and prides himself on being a consummate learner. His track record? Exemplary. Well-known for an unmatched ability to advise on and disrupt complex market trends, his competence and credibility each speak volumes.

Even if you are competent and credible, when you don’t believe in yourself, it will always be difficult to convince anyone else that they should. But do not confuse arrogance with confidence. Confidence is an innate beacon of light that draws others to you, inspired by your competence and credibility.  Arrogance, on the other hand, is distinguished by blatant pretense and quickly turns people off. When you are certain of the value that you bring, there is no need to overcompensate.

When former President Barack Obama enters a room, he embodies unmistakable, unshakable confidence.  His compelling demeanor, marked by a powerful sense of certainty, is magnetic. Widely acknowledged for his standout ability to influence others by leveraging the perfect trifecta of competence, credibility and confidence, he has become an irresistible icon the world over.

Having all of the above qualities does not exempt you from being compassionate. To effectively influence anyone, they must also know that you care. We’ve all heard the familiar adage coined by Theodore Roosevelt, “People don’t care how much you know until they how much you care.” This sentiment especially rings true when it comes to influence.

It’s one of the main reasons that Oprah Winfrey, for example, has become such a beloved celebrity. While she has contributed a great deal of thought leadership over the years, people have come to love and admire her even more because of her compassion for others, vividly demonstrated through philanthropy. She really cares about people, and her compassion has made raving fans of the masses as a result.

Charismatic leaders are often the most influential. Rapport is a powerful tool that can be leveraged to connect with virtually anyone. As humans, we have an innate, almost primal desire to connect with one another. That desire, however, does not always translate in everyday interactions. Sometimes we’re successful. Other times not so much. Developing charisma requires being intentional and focusing on others rather than yourself. When people feel connected to you and your vision, they are far more likely to get on board and offer their support.

Lee Iacocca used his charisma to work many a room and influence others through the gift of gab. One famous instance was his ability to persuade Congress to guarantee a sizable loan to Chrysler that saved it from a crippling bankruptcy.

If you are spotty in how you show up, your personal brand will lack credibility and you will lack the ability to garner influence. Consistency is key to building executive presence because it provides the best “evidence” of your deliverables. If you bring your A game every now and again but your C game most of the time, you’ll be known as an average player. People need to know they can count on you to do what you say you will, at a level that reflects excellence. If not, your efforts will all be for naught.

Floyd Mayweather has developed an impeccable reputation for excellence in the boxing world, not only because of his remarkable skill, but also because of his consistency. He trains consistently with an enviable work ethic and expends tremendous mental and physical effort to capture every win. His opponents, as well as his fans, have come to know this truth quite well.

Are you ready to wield influence? If so, work to master these critical attributes to maximize your personal and professional success.

Related: 5 Ways to Increase Your Influence​