Republicans make no mention of lowering drug prices.,,,Biotech ETFs up on big volume. 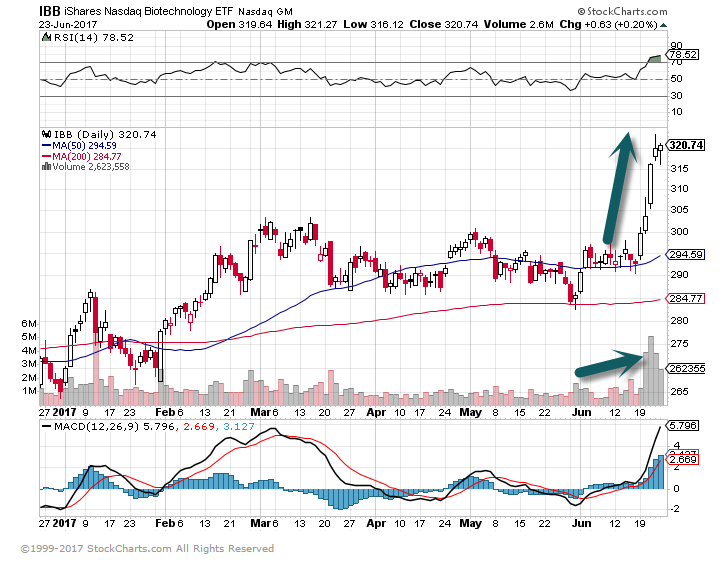 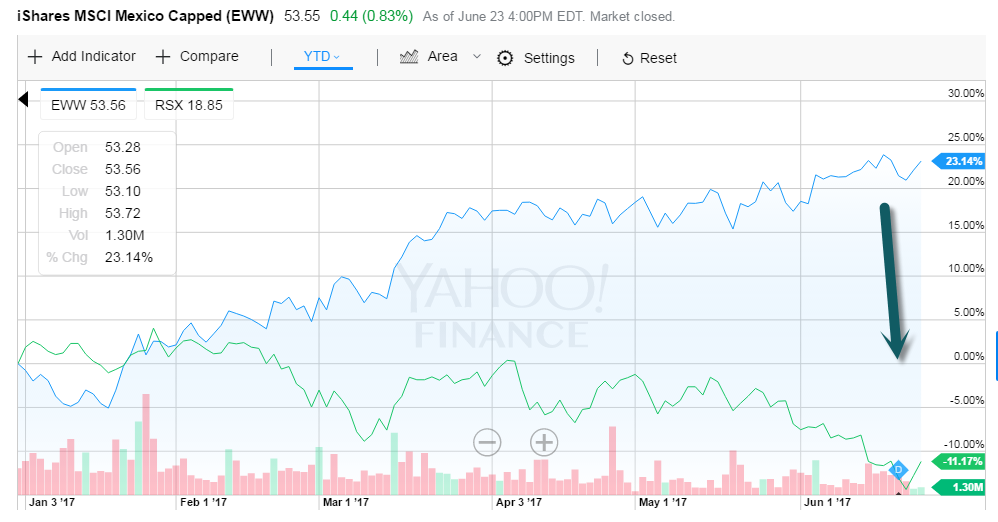 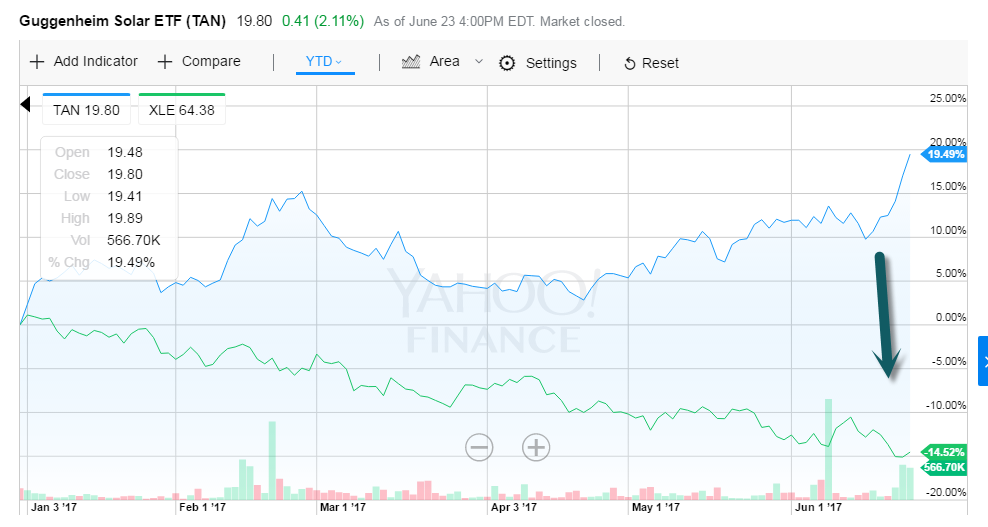 Last year nearly 40 percent of U.S. wind contracts were signed by corporate power users, along with university and military customers. That’s up from just 5 percent in 2013, according to the American Wind Energy Association trade group.

These users also accounted for an unprecedented 10% of the market for large-scale solar projects in 2016, figures from research firm GTM Research show. Just two years earlier there were none.

Still not enough to move needle….Solar ETF near all-time lows. 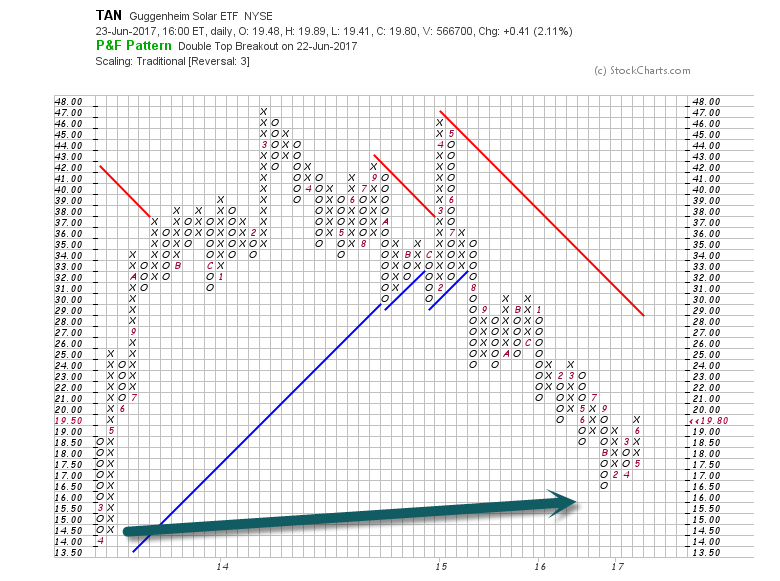 4..Another Interesting Stat Regarding Low Volatility.

In the past 20 years, the VIX volatility index has closed lower than 10 on a total of 11 days, and seven of those were in the past month,” wrote Marko Kolanovic, JPMorgan’s global head of macro quantitative and derivatives strategy, in a June 13 note. “Think about that. Over the past two decades, was the last month the most benign macro environment?” he asks—what with the Department of Justice investigation of the White House, United Kingdom elections, tension over Qatar, and the wobble in big tech stocks.
http://www.barrons.com/articles/investors-reasons-to-beware-the-second-half-1498279167 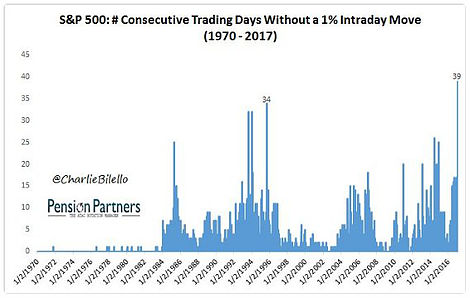 5.First Round of Baby Boomers Turn 70. 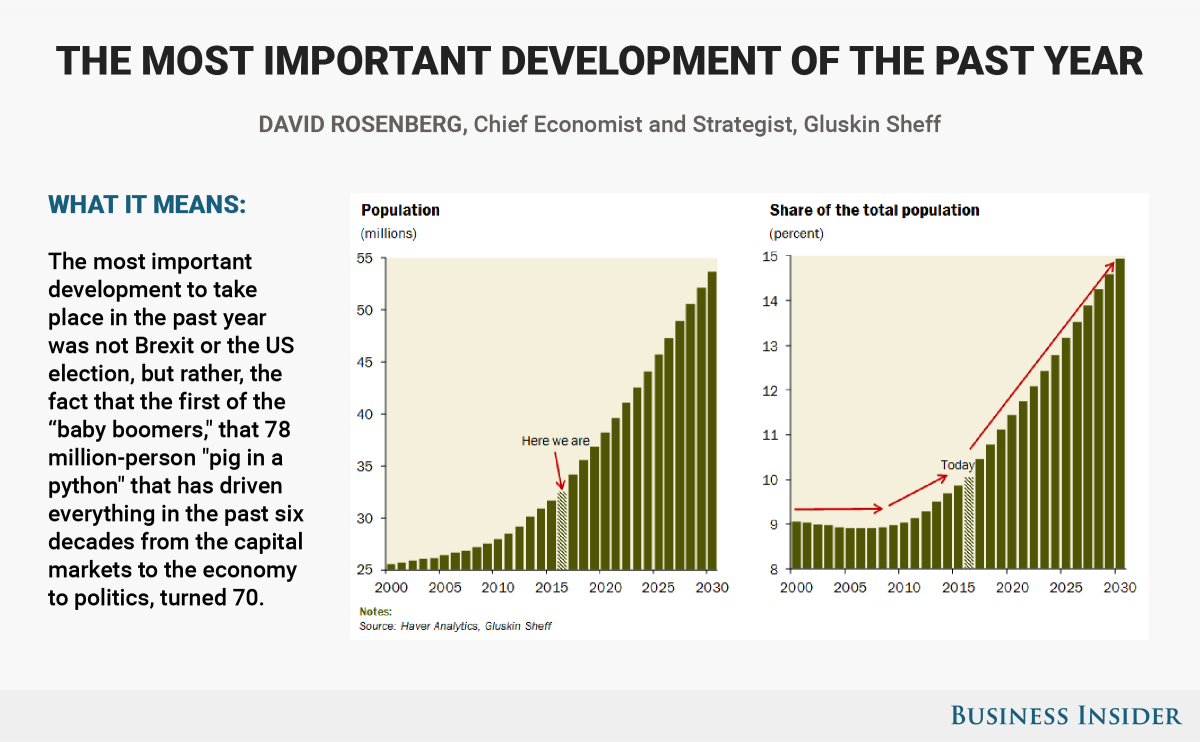 Business Insider; data from Haver Analytics, Gluskin Sheff
“This is where the power and influence still reside, and nothing is going to stop the inevitability that nearly two million of this critical demographic group will be turning 70 annually for the next 15 years. And they are very likely to make it to 85 or even older with medical advancement.

This has crucial implications for the financial markets because it is when you turn 70 that you undertake the most profound asset mix shift since you were in your 30s and loaded up on equities — when you turn 70, preservation of capital and cash flows becomes much moreimportant, and yet in a world where ‘safe yield’ has become extremely scarce, the investment challenges for the aging but not yet aged boomers are going to be daunting, to say the least.”

6.More Oil than Saudi Arabia but Still Descending into Chaos…Venezuela…Inflation Heading to 2000%

As in many petrostates, oil accounts for 95% of Venezuela’s foreign-currency earnings.
Inflation was estimated by the International Monetary Fund at 720% this year; it is expected to surpass 2,000% next year. Shortages are so acute that three out of four Venezuelans lost an average of 18 pounds last year, according to a survey by Venezuelan universities. Diseases not seen there in decades, such as malaria, are back. 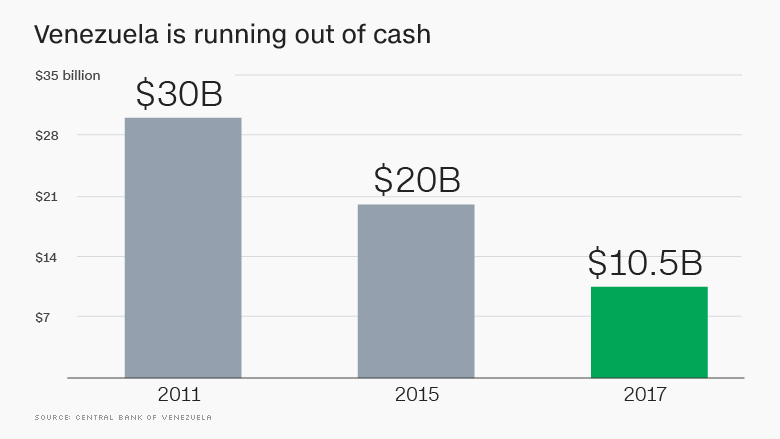 7.Blackstone Hit $3.79 During Lows of Crisis….I stumbled on this chart showing volatility.

BX $3.79 at the nadir of the post-financial-crisis bear market in February 2009 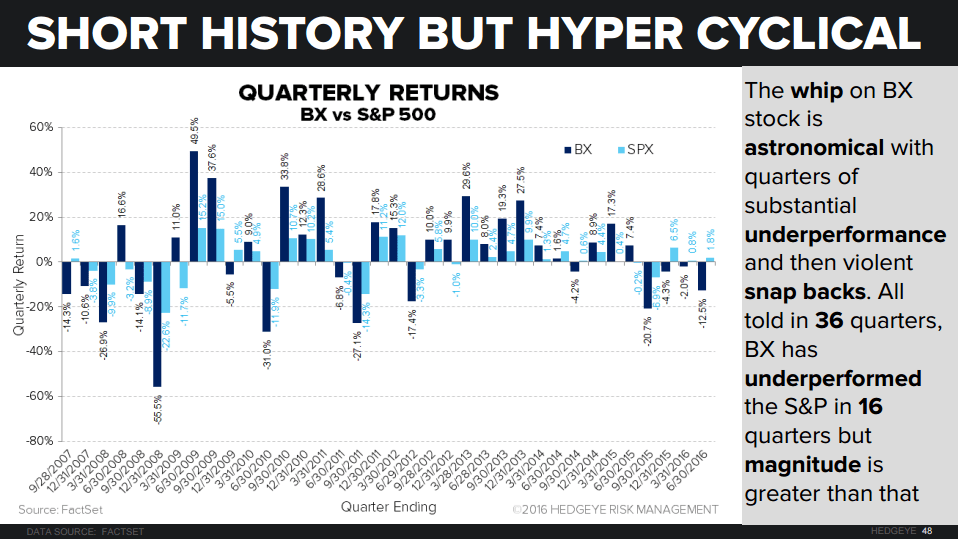 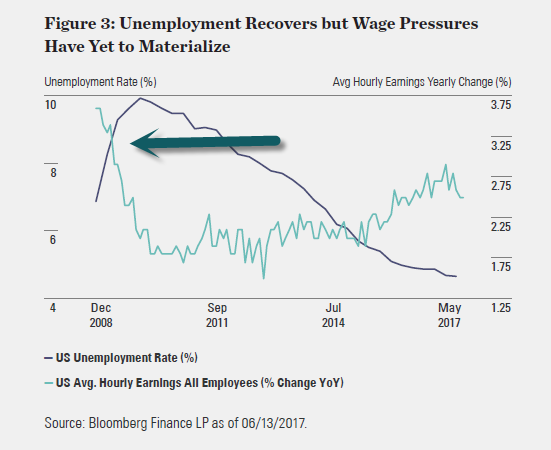 9.Unbelievable Chart….Zero Inflation in Consumer Costs Outside of Rent. 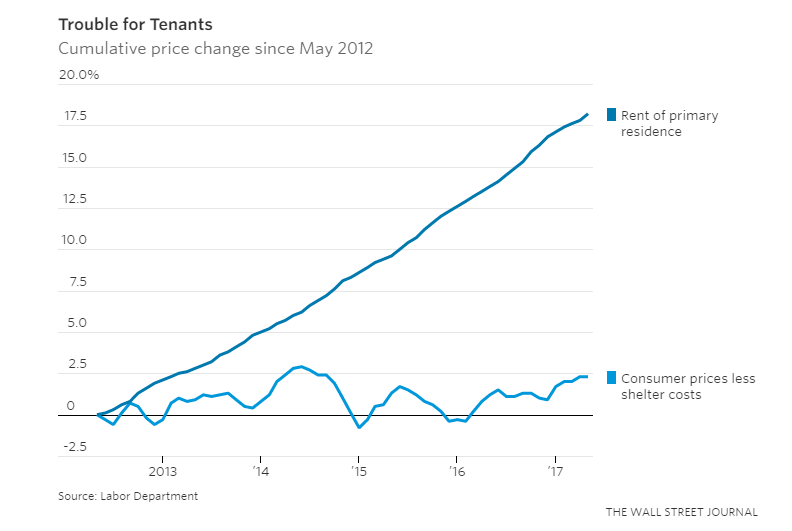 10.To Make Your Meetings More Productive, Do 1 of These 4 Things

If you feel like most of your meetings at work are a waste of time, the good–and bad–news is that you’re onto something. One survey found that 50 percent of meeting time is unproductive while up to 25 percent of meetings are spent on irrelevant issues. The same way we put deliberate thought into building businesses for our customers, we need to be intentional about planning meetings for their participants. A successful meeting is designed with its participants in mind.
Here are four tips for designing a brain-friendly meeting.

1. Set meeting goals
Each time we succeed at a task, our brains release dopamine, which travels through our brain’s reward pathway. When this happens, we feel feel pleasure and motivation. Each time we feel this sense of reward, we are inspired to re-experience that feeling of pleasure, thus increasing concentration and motivation.
Before every meeting (in-person or beforehand) establish tangible, public goals so people know what to expect and understand how to make effective contributions to the meeting. In working toward (and meeting) each meeting goal, people will be more motivated and focused on meeting the next.

2. Split the meeting into sections
For our brains to process new information, our bodies require a significant amount of glucose, oxygen, and blood flow. So, even if we are just sitting around a conference table, we eventually feel physical fatigue over receiving new information.
To prevent participants from burning out, break your meeting into smaller, more digestible sections (a maximum of eighteen minutes). At the end of every section, invite people to reflect and ask questions. Every 2-3 sections, allow people to take a break and leave the room.

ADVERTISING
inRead invented by Teads
3. Get physical
A number of research studies have shown how physical exercise helps boost brain power. When we learn and process information, neurons in our brain are traveling through pathways and making connections. When we move, we stimulate movement in the brain, thus encouraging faster learning and thought-processing.
You certainly don’t need to have meetings while jogging, but you might want to consider incorporating movement into your meeting. This could be anything from a quick break for everyone to stand up and stretch to interactive activities which require people to stand up from their seats and move across the room to different stations or groups of people.

4. Meet later in the day
According to a Duke behavioral scientist, our most productive hours are in the first two hours of the morning. This is the time that most people like to dedicate to tasks they want to complete. During morning meetings, most people are too distracted by their more pressing tasks and are unable to give the meeting their full attention.
It seems counterintuitive, but avoid scheduling meetings first thing in the morning when possible. Give people the time to cross other pressing items off their list so that they can attend your meeting with a clear mind and focus on the content that you put forth.

Unfortunately, meetings already have a poor reputation among many employees. To win back your audience, be intentional about designing meetings in such a way that they will be as easy as possible on the brain.

The opinions expressed here by Inc.com columnists are their own, not those of Inc.com.
https://www.inc.com/rohini-venkatraman/4-ways-to-design-brain-friendly-meetings-according-to-neuroscience.html