1.China Majority of Stocks 10% Down Limit. 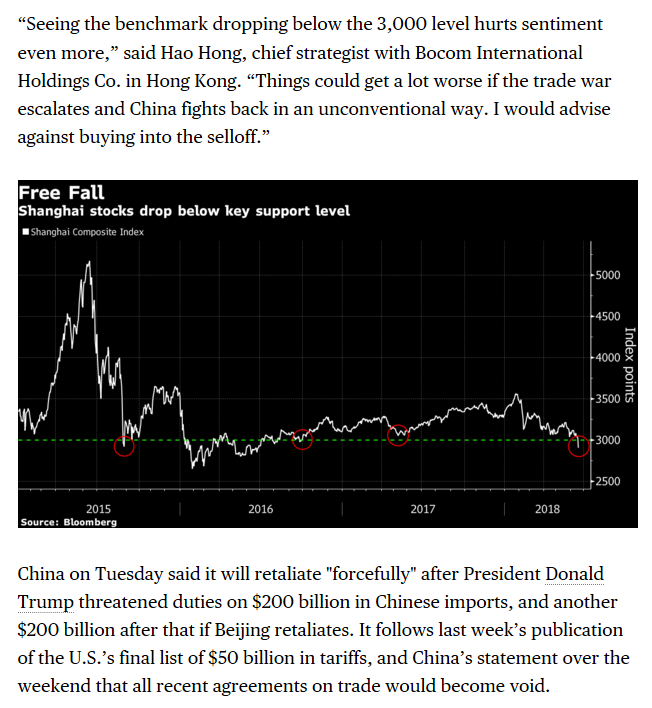 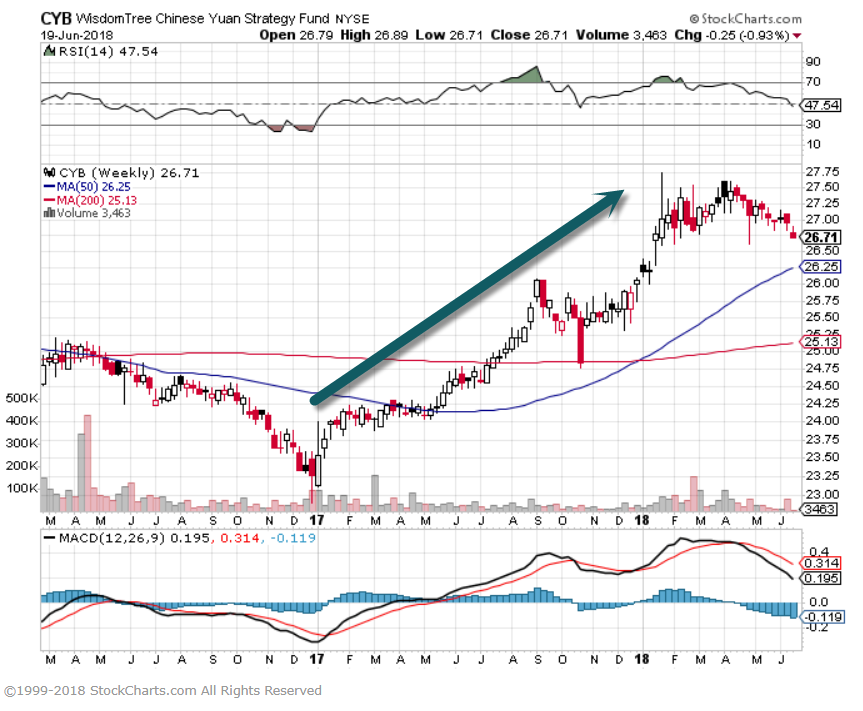 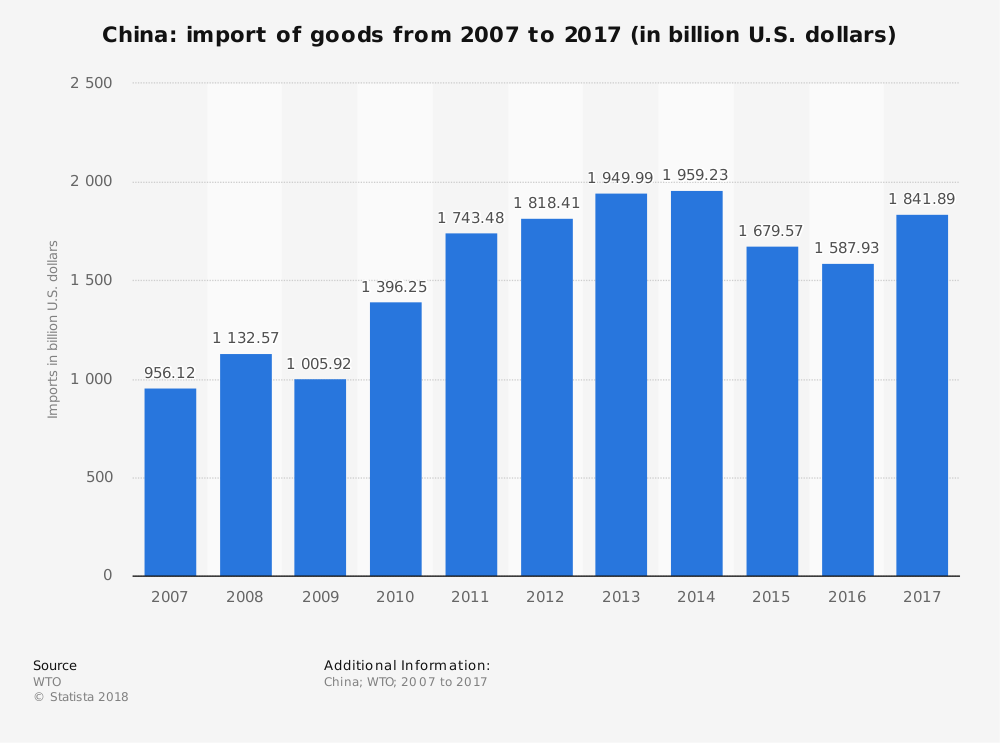 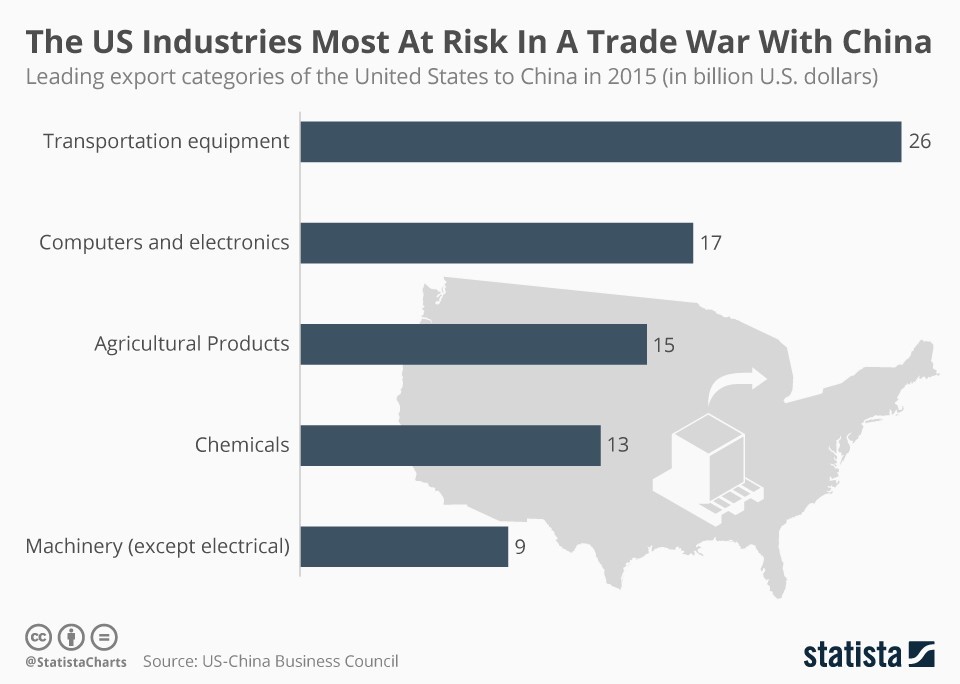 Actually, it already has—Soybean as example…

And to show you how, we’re going where no newsletter has gone before…

Soybean futures: They dropped to their lowest point in 9 years.

Why they’re important: Soybeans are the U.S.’ #1 agricultural export, and China is a repeat customer (for animal feed, tofu, cooking oil, and more). In fact, 62% of total soybean exports go to China. So as you can imagine, China putting a large tariff on the grain (like it promised) would be a huge blow to American farmers.

But don’t take our word for it…Purdue University economists crunched the numbers:

Bottom line: The biggest problem right now is uncertainty over whether these tariffs will actually go into effect. As one grain broker told the WSJ, “Nobody has a clue what to do.”

A news release from USDA on Thursday stated that, “U.S. agricultural exports totaled $140.5 billion in fiscal year (FY) 2017, climbing nearly $10.9 billion from the previous year to the third-highest level on record, U.S. Secretary of Agriculture Sonny Perdue announced today. As it has done for well over 50 years, the U.S. agricultural sector once again posted an annual trade surplus, which reached $21.3 billion, up almost 30 percent from last year’s $16.6 billion.” 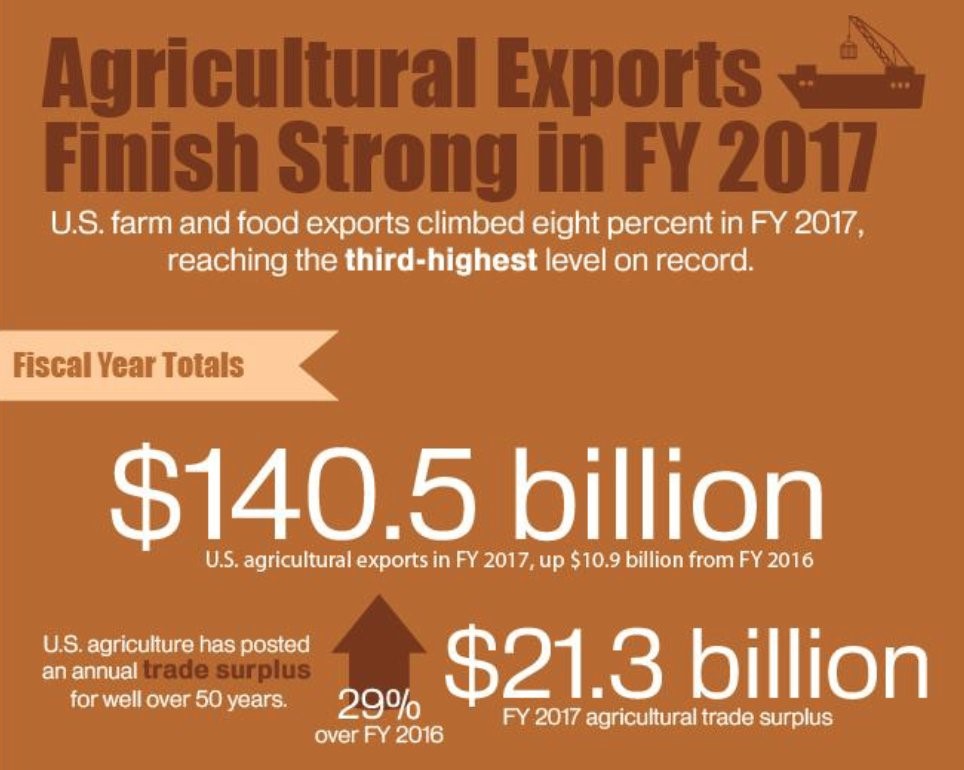 EM Volatility Has Been Declining

Headlines about EM risks are unsettling, yet they tend to obscure declining volatility in EM stock markets. In the past, EM stocks were more volatile than developed-market stocks, as investors perceived them to be much riskier. But even though US market volatility spiked this year, EM volatility has been relatively subdued (Display). 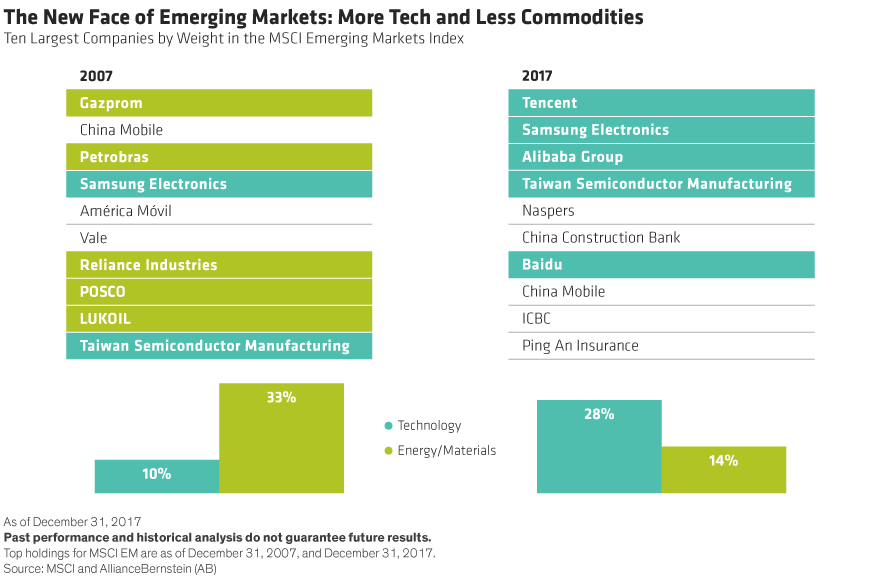 6.However…Strong Dollar and Trade War Have Not Been Good For International Markets. 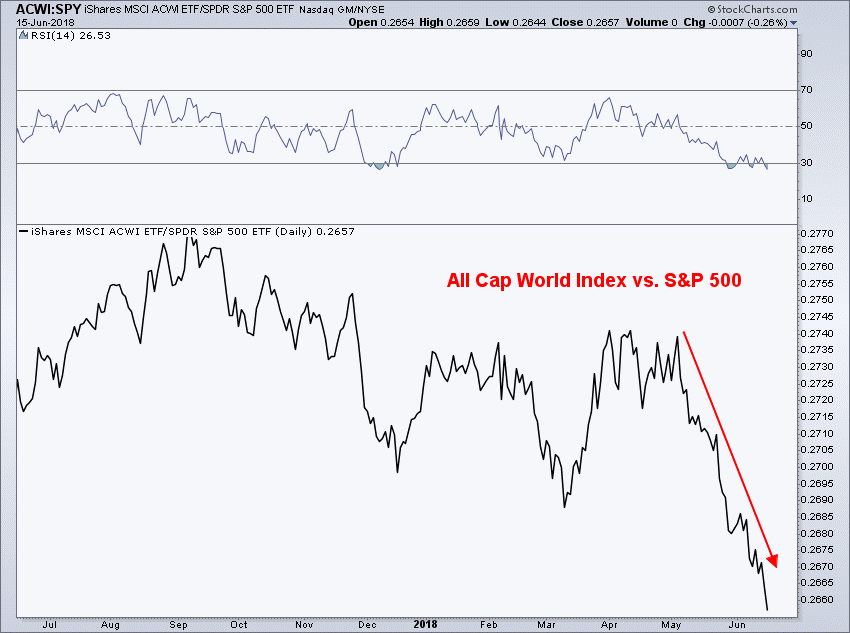 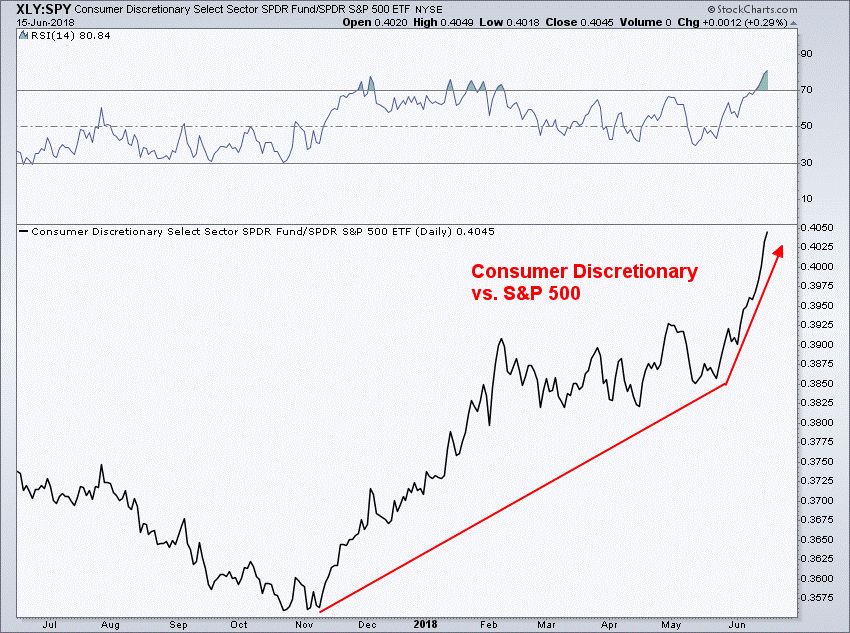 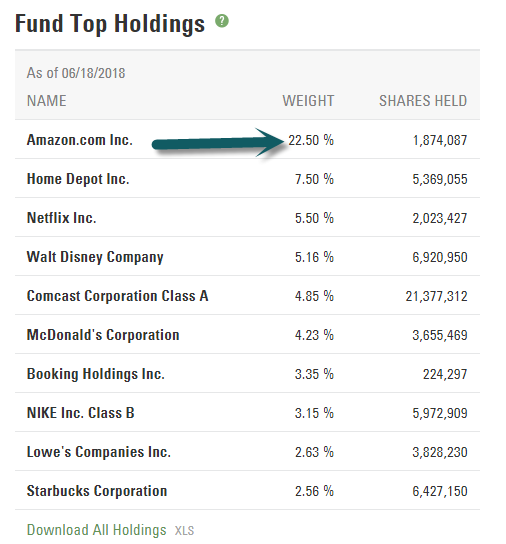 8.Creative Destruction….GE Out OF DOW After 110 Year Run on Back End of One of Longest Bull Markets Ever.

GE shares have tumbled 55% over the past 52 weeks, erasing more than $100 billion in wealth, as the company has switched leaders, slashed its dividend payment and pursued a restructuring that could result in a breakup of the struggling conglomerate. It is the cheapest stock of all 30 Dow components.

GE Drops Out of the Dow After More Than a Century

General Electric is being replaced by Walgreens Boots Alliance, in the latest setback for a troubled conglomerate that once had highest market value of any U.S. corporation 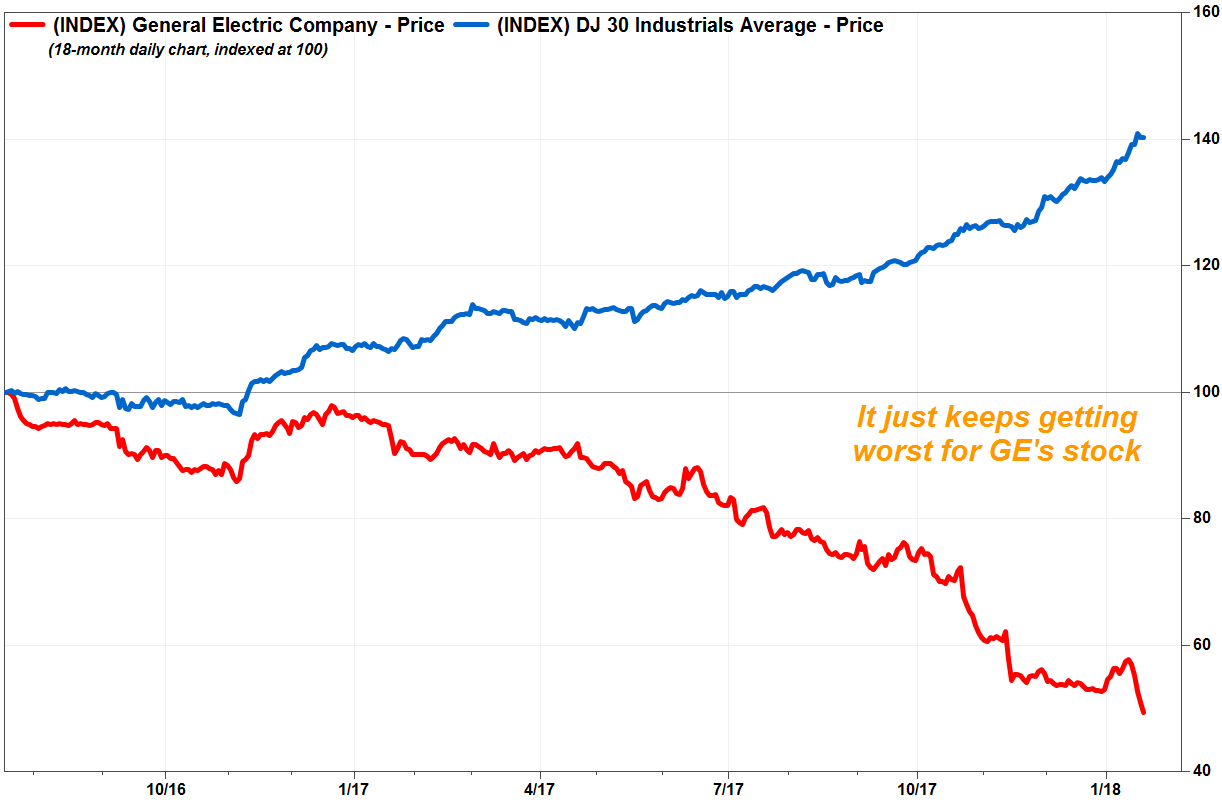 By the age of 70, seven out of 10 Canadian men develop a noncancerous condition known as benign prostatic hyperplasia (BPH) or, less glamorously, enlargement of the prostate.

Two hormones, testosterone and dihydrotesterone (DHT), play a role in enlargement of the prostate over time. Testosterone is converted to DHT by an enzyme called 5-alpha reductase. This enzyme decreases testosterone levels while increasing DHT levels, thereby encouraging growth of the prostate gland.

Luckily, there are some simple lifestyle changes men can make to keep their prostates healthy.

Studies have shown that these dietary modifications are also helpful in relieving the symptoms of BPH.

Reduce the intake of:

Increase the consumption of:

Saw palmetto: The berries of the saw palmetto, a dwarf palm tree, are made into a supplement taken in pill form. It has demonstrated positive results in reducing lower urinary tract symptoms in men with BPH with very few or no side effects. It is postulated that saw palmetto works by decreasing the activity of the 5-alpha reductase enzyme and thereby lowering the quantity of active DHT in the prostate gland.

Kegel exercises can help prevent urine leakage. It is recommended to perform these exercises while urinating to isolate and strengthen the pelvic muscle. Contract the muscle until the flow of urine decreases or stops, hold for 10 seconds, then release the muscle. Repeat five to 15 contractions, three to five times a day.

Maintaining a healthy weight is also important for prostate and overall health. Strive for 30 minutes of physical activity per day to start. By changing your diet, taking supplements, and exercising regularly, these lifestyle changes can help reduce and relieve the symptoms of BPH.

Symptoms of BPH include:

10.8 Traits of Exceptional Character That Lead to Happiness and Success

Always decide hires on character. You can teach skills, but adults who don’t know how to be a good person won’t learn on the job.

Opinions expressed by Entrepreneur contributors are their own.

There is nothing more valuable to any team or company than people of good character. These types of people hold traits within themselves that separate them from others. When hiring, the one thing we want to look for is an idea of their character.

If we hire a person with substandard character but who can produce, we may benefit financially but will deal with a host of problems caused by their poor character that become more of a headache than it’s worth. We want to hire and work alongside people who can produce but who also demonstrate exceptional character. In my new book Success Equations: A Path to Living an Emotionally Wealthy Life, I discuss the importance of exceptional character. Here are some of the traits I define.

At the core of any person with good character is honesty. They do their work clean, according to what is right, and never cheat or lie to get ahead of the curve. People with good character are who they say they are and deliver what has been promised by them and expected of them. Honesty is what separates the activator from the procrastinator, the dreamer from the doer, and the successful from the non-successful. When it comes to character, we are not what we think, we are not what we say, we are what we do.

Character is largely developed from suffering the trials and errors of life. Survivors stick, they don’t quit. People of exceptional character do not quit when times get tough, nor do they treat others terribly when things don’t go their way. People who possess exceptional character have the faith and tough-mindedness to stay in the grind and get things accomplished regardless of the odds. There is a lot to be said about staying power. The more others quit under the same stressors, the more opportunity and grit the person of good character has to make sure to secure what they set out to achieve.

People of good character are loving people. They take the time to care. They understand that when people feel cared for they will do almost anything for them. In reality, there is no way to fake genuine caring. It has a completely different vibe than “selling” or “convincing.” People of good character impact others as deeply as they do and people want to work along side them because of their loving and genuine nature. When we work around, for or with people who are caring there is less absenteeism, fewer missed or canceled meetings and higher rates of productivity because people enjoy working around those who raise their morale.

When people possess good character, leadership is the natural side effect. People want to follow those who have suffered, those who possess self-awareness, patience and the ability to rise above. No matter their title in the business world, people of exceptional character draw a following

Self-control is one the most powerful traits of people who possess exceptional character. They have a calm demeaner as demonstrated in their ability to be patient and listen to others. It takes a certain amount of self-control to listen rather than talk. It is this elegant nature of those with good character that not only makes them a bit mysterious but also so interesting to others. People of good character recognize that gentleness is their greatest strength. They are above the pettiness of right and wrong when in conflict or facing challenge. They are more interested in finding the path to the solution that involves inclusion and innovation; ideas given by everyone.

Good character and hard work go hand in hand. None of us are born with good character. Good character is developed over time and through the virtues of hard work and commitment. We cannot develop our character without having to work hard and to suffer through times of conflict and challenge. The reason hard work develops character is because it is the only thing that can outdo and outlast both genius and talent.

More than anything, people of good character are deeply driven to help others. They do not view success and selfishness as being at all compatible. Once person’s success is also another’s. The greatest thing people of good character believe in and do is help others succeed. These types of people will jump in and help in any way they can, especially when it is good for the team. Success is never viewed as a one-man position. Success is always a team effort.

Perhaps the greatest standout quality of people with exceptional character is how they inspire others nearly effortlessly. They don’t often need to be center stage or the person who’s getting all the attention; rather, they are the calm force who people listen to when they talk. Everything about these types of people make them stand out from the rest. Their most notable traits being great composure and smart decision-making.

Possessing exceptional character is more than being praised for our talent or intellect. Those are things common to all. We each have our intellectual gifts and unique talents. Those who possess good character stand out from the rest in the honing of their skills and intellect, making sure to use it for good rather than self-promotion. Good character is not given to us, like talents and IQ. It is something people have to cultivate though thought, choice, courage, commitment and dogged determination.