US companies’ massive cash hoard is finally coming down Financial reserves dropped 10% in the first half of last year, Moody’s finds Share on Twitter (opens new window) Share on Facebook (opens new window) Share on LinkedIn (opens new window) The cash holdings of US companies fell nearly 10 per cent in the first half of this year, signalling a turning point in the historic financial reserves they amassed in past two decades. Corporate America’s cash mountain peaked at close to $2tn at the end of last year, according to rating agency Moody’s. Some 70 per cent of the money had piled up offshore, as companies hoarded their overseas profits rather than face tax charges by bringing them home and spending the money on things like acquisitions and stock buybacks. But US tax reforms enacted at the end of last year subjected all past profits to tax, though at a lower rate, ending the incentive to hoard. That released the cash that had been stranded offshore and by the middle of this year total cash reserves had fallen $190bn, or 9.5 per cent, according to a Moody’s calculation published on Tuesday. 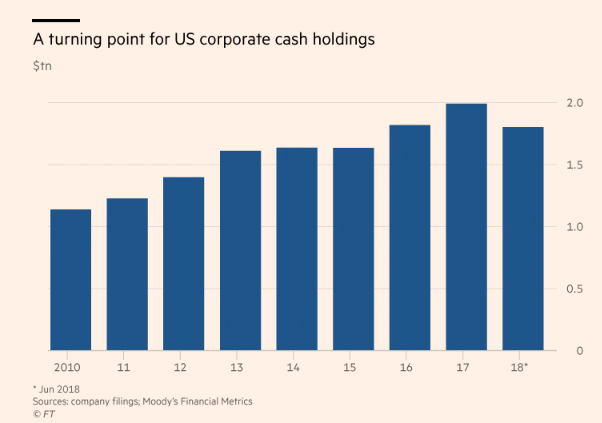 Moody’s Investors Service said yesterday that the 928 U.S.-based, non-financial companies it covers claimed $1.7 trillion in cash and liquid investments at the end of 2018.

Driving the news: 2018’s drop in cash hoards serves as a master class in chain reactions.

And put it to use they did. Last year, capital expenditures leaped 12% to $851 billion, dividends climbed 6.7% to $412 billion, and net share buybacks almost doubled to $467 billion.

The top five cash-holders last year—Apple, Microsoft, Alphabet, Amazon, and Facebook (heard of ’em?)—held 33% of the total balance in 2018. Apple alone laid claim to 14.5%, a balance larger than the aggregate amount for every other non-tech U.S. sector.

Before the tax overhaul…

U.S.-based companies had slowly built up giant cash reserves in foreign countries, keeping profits at arm’s length from the frightful 35% corporate tax they faced when bringing it home.

Then in 2017, changes in the tax code opened the floodgates for what’s known as “repatriation.” The Commerce Department said companies sent $664.9 billion in foreign earnings back to the U.S. as dividend payments in 2018, up from $155.1 billion a year earlier.

Looking ahead…Moody’s Point is that companies will continue to put money to use paying down maturing debt, boosting buybacks, and upping dividends until there’s a reason not to. Look for those piles of to keep shrinking.

2. We Have Covered U.S. Leverage Loan Growth But It’s A Global Issue.

We face a situation where business debt is at historic highs relative to the size of the economy. And the recent growth in business debt has been concentrated in riskier forms of debt: Leveraged loans, often repackaged into collateralized loan obligations (CLOs).3

Last November, Senator Elizabeth Warren voiced her concerns about leveraged lending activities in a letter addressed to the Secretary of the Treasury, the chairs of the Federal Reserve Board, the Securities and Exchange Commission and the Federal Deposit Insurance Corporation, as well as to the Office of the Comptroller of the Currency.4 “I am concerned that the large leveraged lending market exhibits many of the characteristics of the pre-2008 subprime mortgage market. These loans are generally poorly underwritten and include few protections for lenders and investors. Many of the loans are securitized and sold to investors, spreading the risk of default throughout the system and allowing the loan originators to pass the risk of poor underwriting on to investors.”

She also pointed to a number of experts who had recently raised red flags about the leveraged loan market: “Former Federal Reserve Chair Janet Yellen said in October that she is ‘worried about the systemic risks associated with these loans,’ in part because ‘[t]here has been a huge deterioration in standards’ and ‘covenants have been loosened.’ … And the Bank of England noted in October that the global leveraged loan market is bigger than the U.S. subprime mortgage market in 2006, and that like the American subprime market in the pre-crisis period, ‘underwriting standards [have] weakened.’”

In a recent speech,5 Powell observed: “[B]usiness debt is near record levels, and recent issuance has been concentrated in the riskiest segments. As a result, some businesses may come under severe financial strain if the economy deteriorates. A highly leveraged business sector could amplify any economic downturn as companies are forced to lay off workers and cut back on investments.” 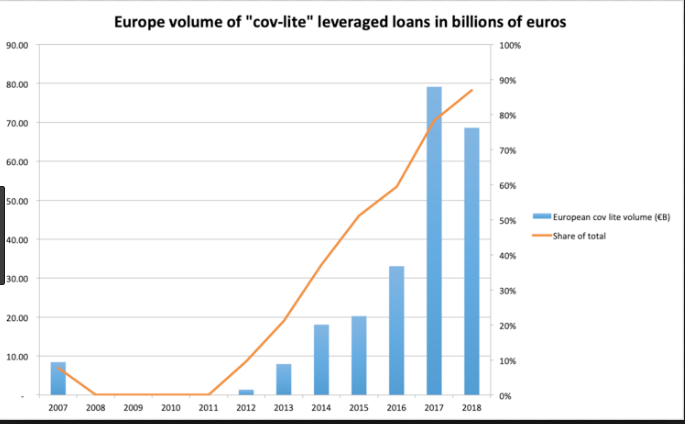 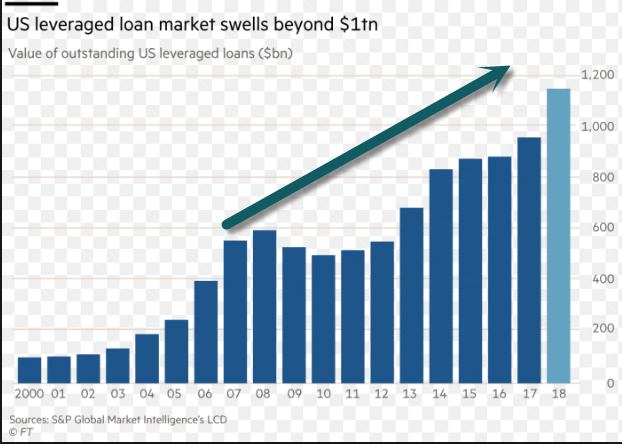 Commodity Index Rolls Back Over to Test YTD Lows….50 day thru 200 day to downside on weekly chart. 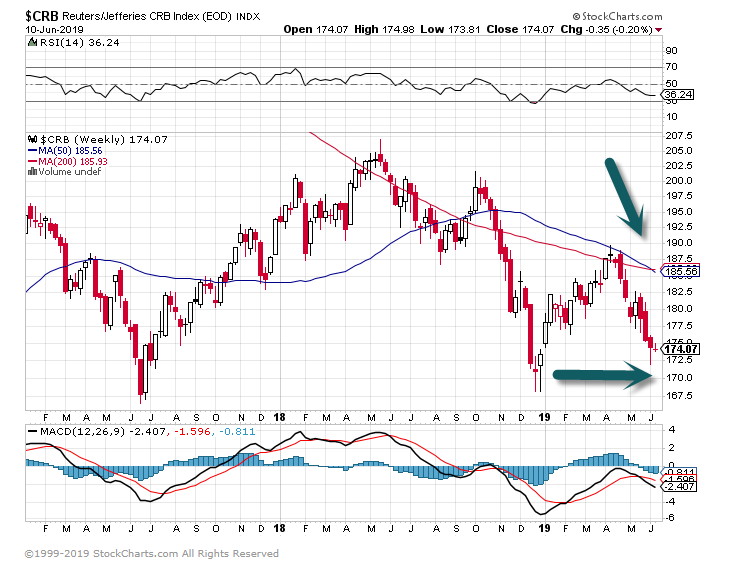 4.Other Problem with Commodities—U.S. and Global PMI’s Heading Below 50 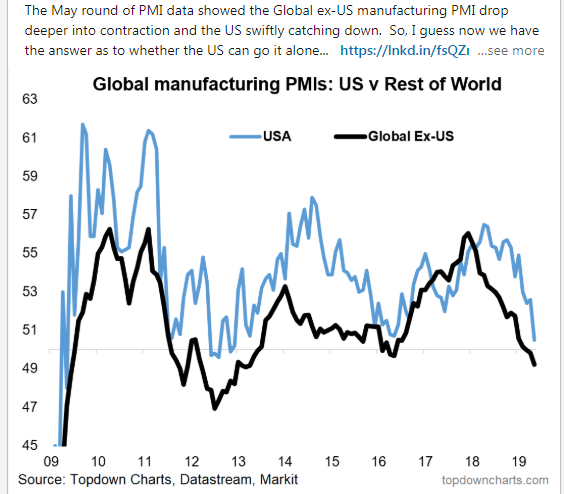 Unleaded Gas Never Got Back to 2018 Highs 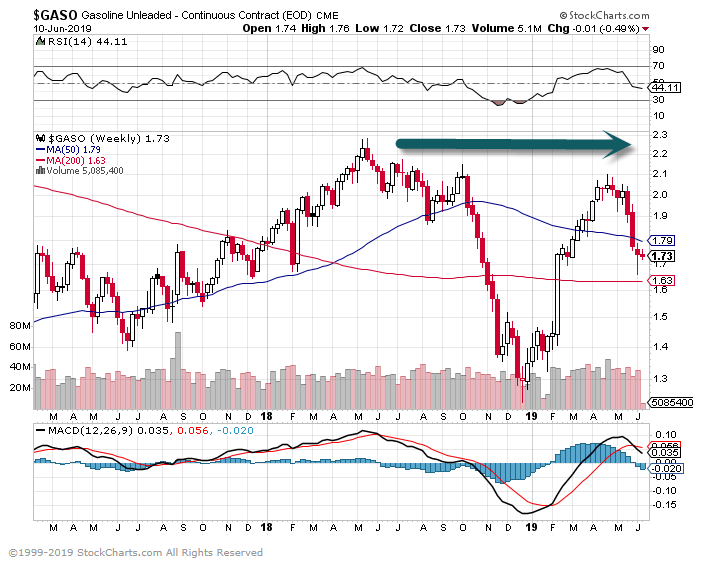 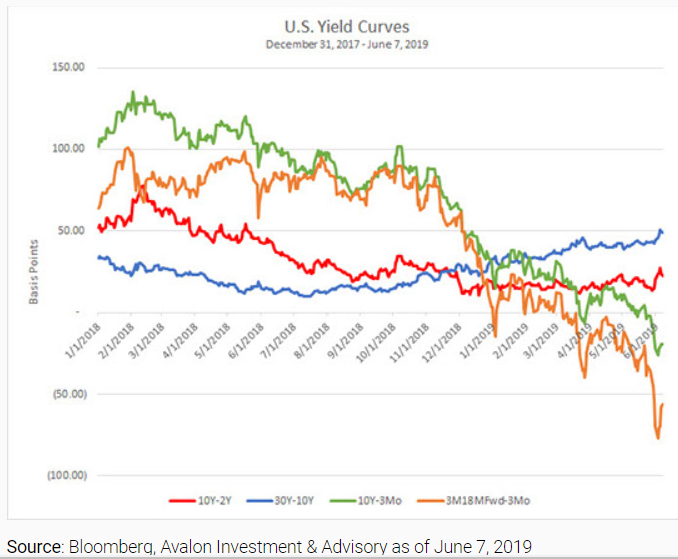 Chart of the Week: While much attention has been paid to the inversion of the U.S. 10-year yield minus the 3-month yield (meaning the 3-month yield is above the 10-year), less attention has been paid to other yield curves. But what is the bond market telling us? First, the 3-month yield is expected to decline precipitously as evidenced by the 3-month yield 18-months in the future now being priced at more the 0.5% lower than the current 3-month (3M18MFed-3Mo). In other words, the inversion of the 10Y-3Mo could prove temporary. In addition, the 10-year yield is still above the 2-year and in fact recently began to steepen. This means that the bond market is not pricing in a policy error and believes the Federal Reserve (Fed) will cut rates. Markets are now pricing in an almost 100% chance of a rate cut in 2019 and a high probability of two to three cuts over the next year in the wake of the weak employment report on Friday. Avalon currently expects one cut in 2019 and will be watching initial job claims closely to judge if more cuts are likely since the Fed should be more sensitive to job losses with inflation remaining tame. While U.S. 2Q GDP growth seems likely to be weak, growth should remain decent for the calendar year. Stocks are likely to continue to be volatile and buffeted by trade developments. Global yields seem likely to remain low but move relatively higher as global growth worries recede.

7.30 Year Fixed Mortgage Rolls Back Over

Economic strength bolstered the performance of loans included in commercial mortgage-backed securities with delinquencies improving for the seventh quarter in a row, according to the Mortgage Bankers Association.

CMBS loans that are at least 30 days late or real estate owned fell to 2.61% in the opening quarter of 2019, a drop of 132 basis points year-over-year and 16 basis points from the prior quarter. 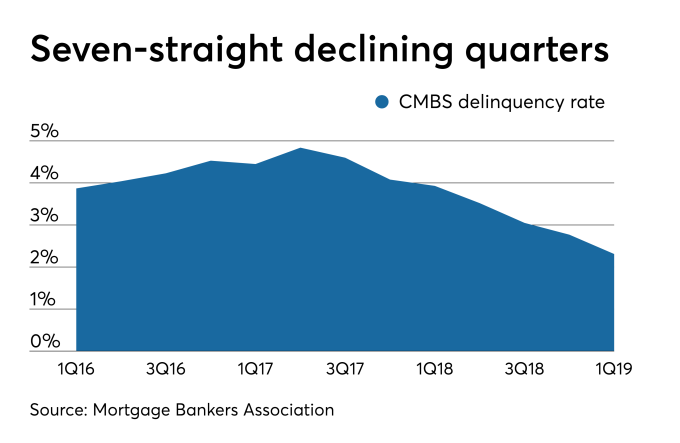 “Steady U.S. economic growth continues to support the financing and values of commercial and multifamily properties,” Jamie Woodwell, the MBA’s vice president of commercial research and economics, said in the report. “Commercial/multifamily mortgage delinquencies remain at or near record lows for most capital sources, and it’s hard to imagine loans performing better than they currently do. Given the environment, there’s little reason to expect a marked deterioration of near-term performance.”

-Not every product at Trader Joe’s is a good deal. Shutterstock/David Tonelson 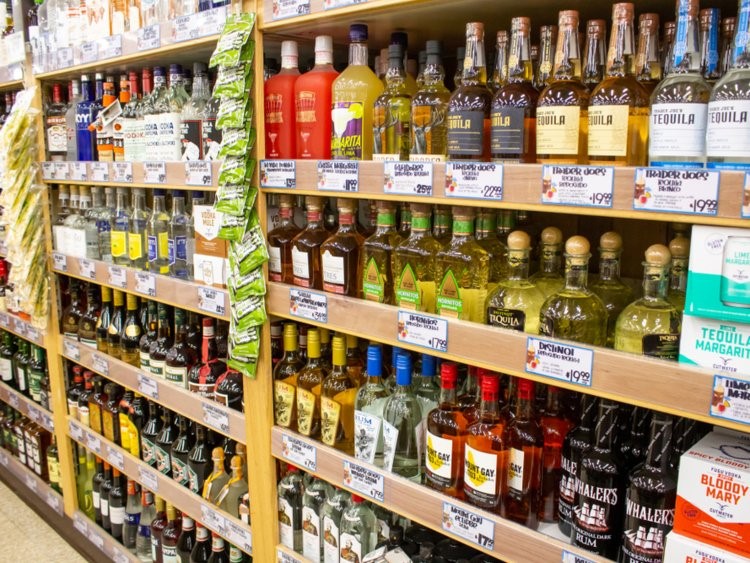 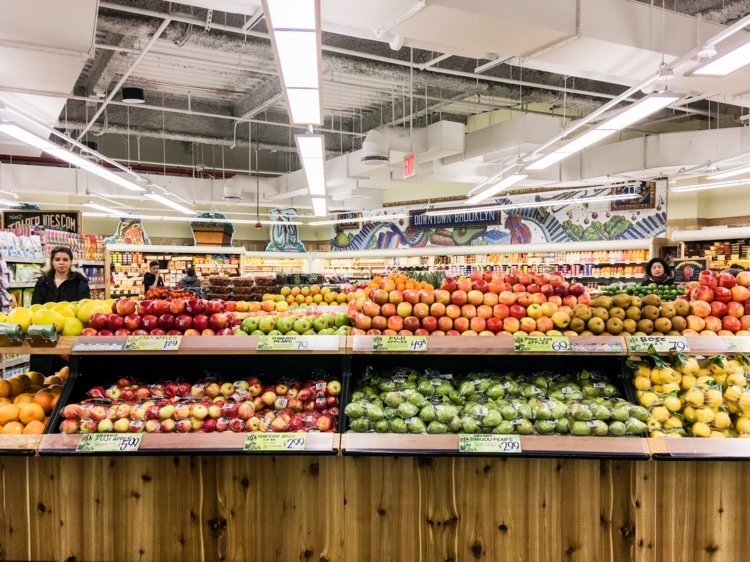 10.Stop Trying to Land the Perfect Job. Find the Best Leader to Work For Instead, Says Warren Buffett

Whom do you admire the most?

Warren Buffett once gave a group of college students career advice that runs counter to climbing the elusive corporate ladder to build the perfect résumé that will land that coveted job at that dream company.

Buffett told the students, “The real thing to do is to get going for some institution or individual that you admire. I mean, it’s crazy to take in-between jobs just because they look good on your résumé​, or because you get a little higher starting pay.”

To Buffett, getting your nose bloodied at big companies just to “round out” your résumé and put you in an ideal career position isn’t as important as finding an “admirable” leader now–one who can open up doors to opportunities you have yet to imagine.

Buffett added, “Go to work for whomever you admire the most,” because, he says, not only will you be jumping out of bed in the morning and having fun, but also “you can’t get a bad result.”

Whether you’re a recent graduate or a seasoned veteran seeking sound examples of leaders you can truly admire, a few people I’ve interviewed over the years fill the bill of Buffett’s “admirable” boss motif. Here are four who are worthy of a spotlight, plus what they told me that has stood out as entirely admirable.

“Couchbase has made a strong and intentional commitment toward putting our employees first. We continue to hold internal events to promote dialogue, growth, and sharing among the broader team. We’ve made a concentrated effort to be transparent and inclusive as a company to drive home our value of teamwork. More important to me is answering the question: Have we positively impacted our employees’ lives with our approach? If we are successful with that, financial results will follow.”

“Culture is the foundation that creates all of the values and beliefs that guide [our] organization’s actions. It’s what attracts quality individuals to join an organization. It all starts with transparency. From the onset, when prospective franchisees come to visit our office, we are transparent. We own up when we make mistakes and, most important, do what we can to fix those problems when they arise. In reality, it’s not that we don’t make mistakes, it’s what we do and how we handle those mistakes when they happen that ultimately builds confidence in our brand.”

“We work hard and with intentionality to make our workplace fun, engaging, and built on camaraderie. If we can get people to love coming into work every morning, then we can build a stable team of professionals and drive turnover out of the system. And that has a very practical effect on client satisfaction. But really both of those things are built on a bigger idea, one you don’t often see in business books. It’s compassion. So when we built this company, we tried to look compassionately at our associates and say, “What would I want from my job? What would make me excited to come to work?”

“I believe that all employees contribute to a company’s success, and I work to ensure that all employees feel like they have a stake in ThoughtSpot. Employees who simply feel as though they are doing a job will never show up with the passion needed to produce excellent, truly great work. Instilling passion is a matter of making everyone feel like they belong and making sure they know the company they work for genuinely cares about their well-being–that you trust them, that they can trust you. If someone is good at what they do, they can work anywhere; but if they stick around somewhere, it’s because they want to be a part of the vision–they want to help grow the business. I firmly believe that everyone should love what they do: Developers should love designing products, copy editors should love writing, and an organization’s leaders, well, they should love their people.”