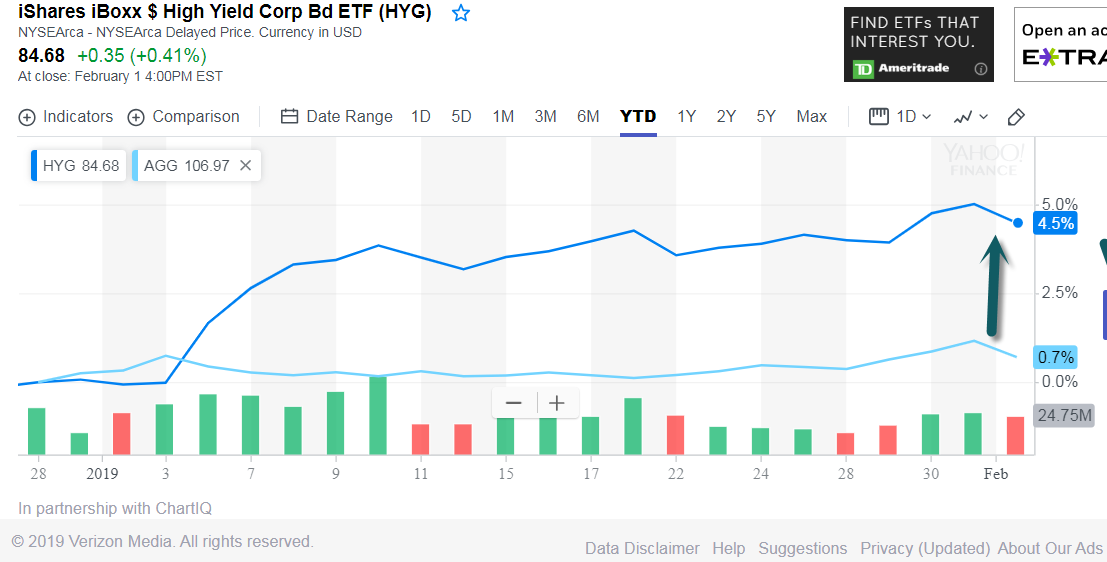 Utermann said the last three times since 2005 when the price-to-book ratio breached 1.6 times, the index has gone on to enjoy big gains in the following 12 months. In fact the average annual total return on those occasions has been an impressive 55 per cent. 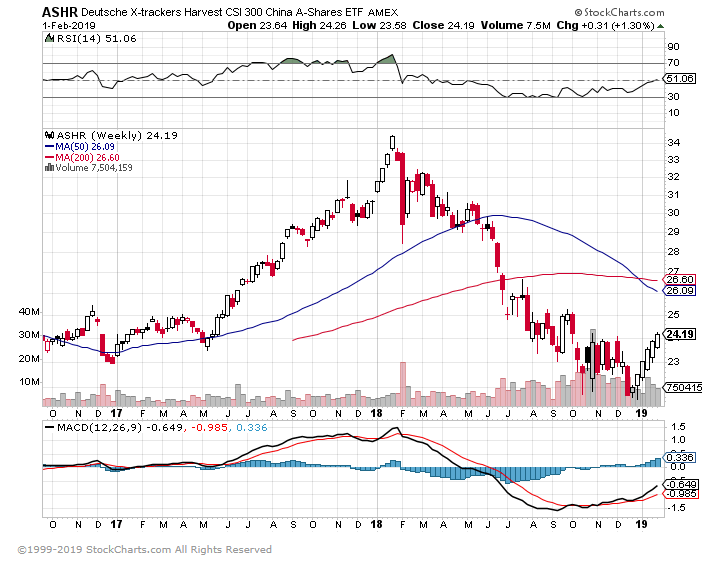 Every time Chinese stocks are this cheap they spend the next year soaring, says AllianzGI boss

GE Gets a Bounce. 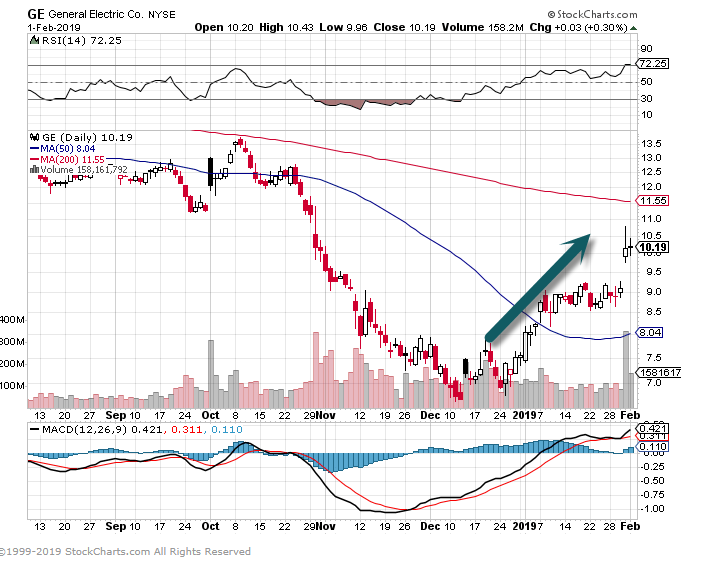 4.Stock One Day Reaction to Earnings…3rd Best in 20 Years.

The S&P 500 gained 1.6% this week as stocks reporting earnings continued to get bid higher.  Based on stock performance this earnings season, investors got way too bearish leading up to the start of the Q4 reporting period in early January.  With reports not coming in as bad as expected, there has been a rush to buy stocks that beat estimates.  At the same time, stocks that have missed estimates have not been getting hit that hard.  So far this year, stocks that have beaten EPS estimates have gained 2.64% on their earnings reaction days, while stocks that have missed EPS estimates have only fallen 1.92%.  Normally, stocks that beat EPS only gain 1.9% on their earnings reaction day, while stocks that miss EPS normally fall ~3.5%.  This year has been a huge outlier so far, but eventually we’ll see mean reversion back towards the long-term averages.  Enjoy the earnings strength while it lasts!

5.Jim Grant in Barrons… If you have to forecast interest rates, do it in the shower where nobody can hear you.

Here’s another: In America, nominal yields have tended to rise and fall in multidecade intervals—down in the final quarter of the 19th century, up through 1920, down till 1946, up till 1981, down till 2016, and now up again.

Then, again, past performance guarantees nothing. Big deficits and radical monetary policy could force a faster rate of rise this time. America needed 192 years to amass its first $1 trillion in gross public debt; it hit the mark in 1981. Now there’s $22 trillion on the books, with another $1 trillion looming in this ostensibly prosperous fiscal year alone. 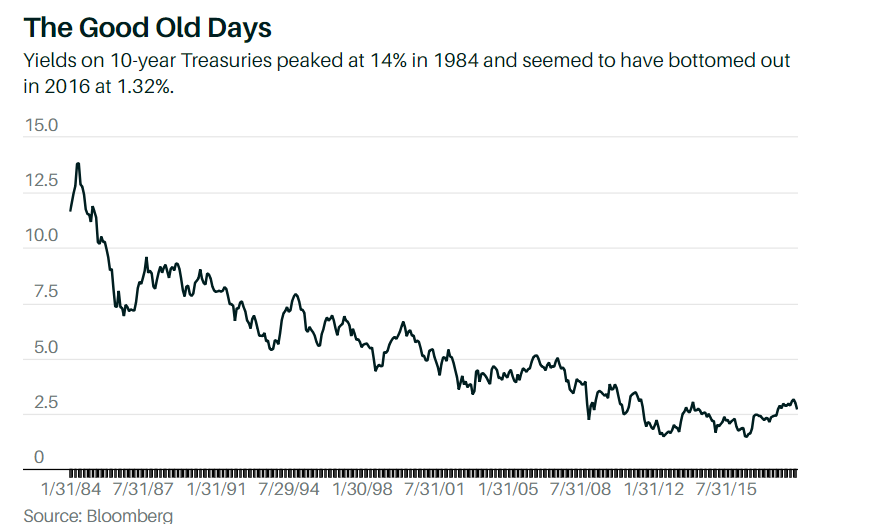 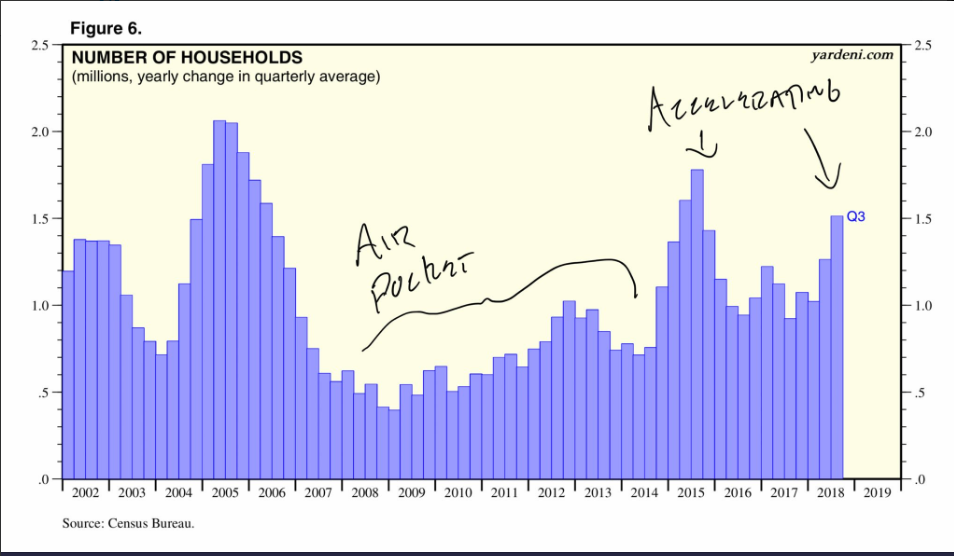 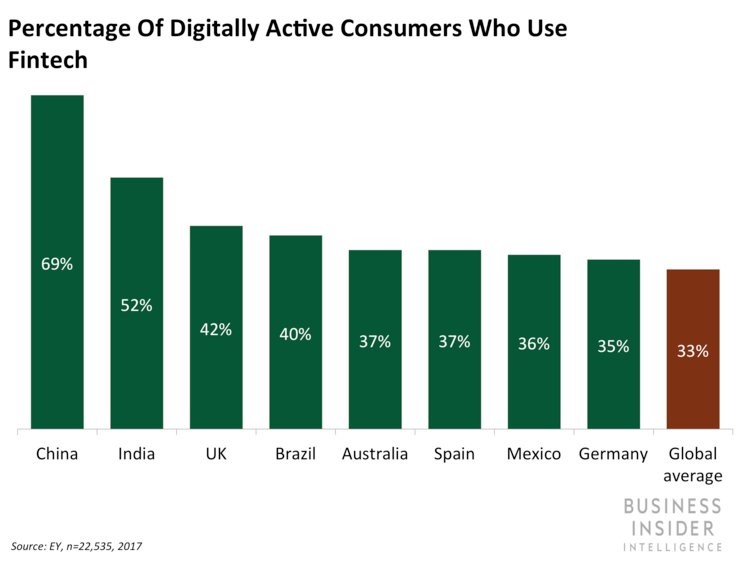 States are now in a better financial position after they were forced to cut back following the economic downturn. The combined tax revenue for states surged last year, rising 7% in fiscal 2018 compared with the previous year, according to S&P Global Ratings, its fastest pace since 2013.

“The states are probably healthier now than generally at any point since the end of the Great Recession,” said Gabe Petek, a former managing director at S&P Global Ratings. “What looks good right now might be reflective of conditions that have already passed.” 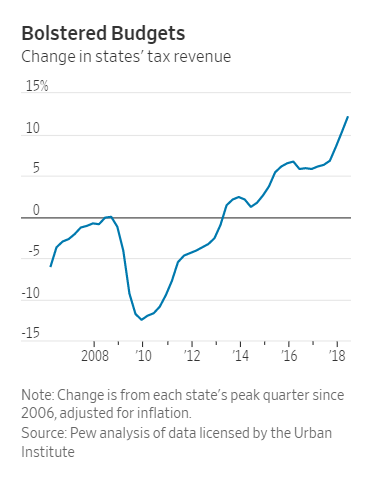 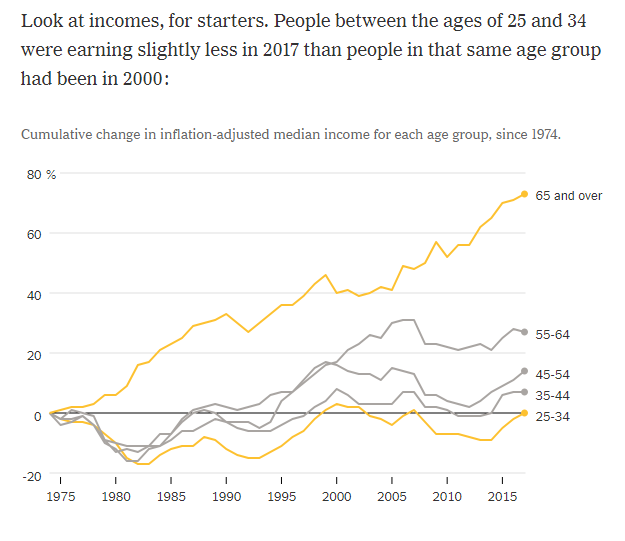 Why is this happening? The main reason is a lack of economic dynamism. Not as many new companies have been forming since 2000 — for reasons that experts don’t totally understand — and existing companies have been expanding at a slower rate. (The pace of job cuts has also fallen, which is why the unemployment rate has stayed low.) Rather than starting new projects, companies are sitting on big piles of cash or distributing it to their shareholders.

This loss of dynamism hurts millennials and the younger Generation Z, even as baby boomers are often doing O.K. Because the layoff rate has declined since 2000, most older workers have been able to hold on to their jobs. For those who are retired, their income — through a combination of Social Security and 401(k)’s — still outpaces inflation on average. 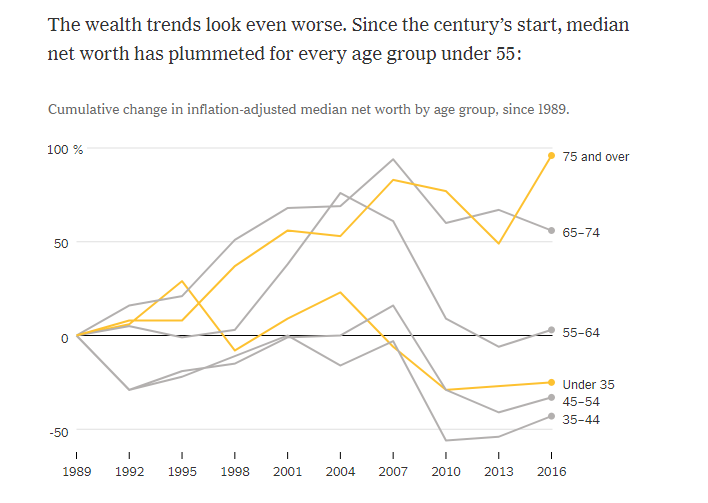 The Fleecing of Millennials–Their incomes are flat. Their wealth is down. And Washington is aggravating future threats.

Who hasn’t been discouraged by lack of follow-through or falling short of a desired goal or milestone? There are probably some good, objective reasons why this occurred; one that may go undetected, though, is the surplus of options that we encounter. Which might sound strange, for it seems at first glance that options are what allows us to choose well, right?

But research has shown that too many choices can lead to discouragement, frustration and ultimately failure. So, fewer choices = better results.

What we label a “lack of willpower” could in fact be too many choices.

Take the famous jam experiment—“When Choice Is Demotivating”—which revealed that when too many choices of jams (24-30) were presented, sales plummeted, and when the choices were limited to six, sales increased.

This goes against the premise that is readily promoted in our modern information society. We talk about options as though they are the key to success and satisfaction. It’s a false assumption. We need information like we need food, but too much food leads to obesity. It’s time to ban infobesity: the relentless feast of online information.

We want more choices because information is addictive. Dopamine causes you to want, desire, seek out and search. Dopamine makes you curious about ideas and fuels your search for more information.

It’s nice to have options. Having a few options is better than having none. But too many choices can cripple our ability to succeed. The researchers call it “choice overload.” Reducing our choices can be beneficial.

Here are four ways subtracting our choices can become a plus:

Variety is the spice of life, but only to an extent. Too much variety can sour life. Making choices with our values in mind helps point out where the spice of life ends and the sourness begins. When “limiting our options” is guided by what is important to us, our options bring personal satisfaction. These become value-based options instead of a smorgasbord of choices.

Extensive choices can have demotivating consequences. When the options are fewer, we are more energized to participate. This is true whether we are shopping, joining, investing or goal setting. The never-ending choices do more immobilizing than motivating.

In one study, students were offered an extra credit paper for their class. They were instructed to choose from a list of topics. Some had a list of six, and some had a list of 30. The fewer options consistently produced a higher completion rate, as well as a higher quality paper. The energy level both to participate and produce was increased.

Having unlimited options can lead to questioning our choices. In our “option-rich” environment, we can find ourselves wondering about the choices left on the table.

In another experiment, students were given the choice of chocolates. Two groups were again tested—one with six choices and one with 30. Both groups were happy with the multiplicity of choices. But in the end, the group with more choices displayed a higher level of regret for not having made an alternate choice.

In today’s world, the amount of information is endless. Too many things to learn means we don’t learn anything well. Deciding on what we want to master, and then taking it deep, is more empowering than dabbling in endless subjects and ideas just a click away—ricocheting from one thought to the next. It’s hard to go deep in the fast lane.

What is needed for personal mastery is not more information, but interpretation—not more content, but context. Deciding what we will learn and filtering out the rest creates comprehension and clarity.

A culture always setting itself up for the “next new thing” can create chronic dissatisfaction.

It’s an irony. Subtraction can become a plus. Like any art, it improves with practice.

Related: The SUCCESS Guide to Simplifying Your Life