1.Stocks and Bonds Going Down Together Like Last Week is a Rare Occurrence.

When Stocks and Bonds Go Down Together
Charlie Bilello

High on the list of the greatest fears among investors is a scenario in which stocks and bonds go down together.

Last week those fears were realized when the S&P 500 (SPY) suffered its worst week since January 2016 while long-term Treasury bonds (TLT) also declined. 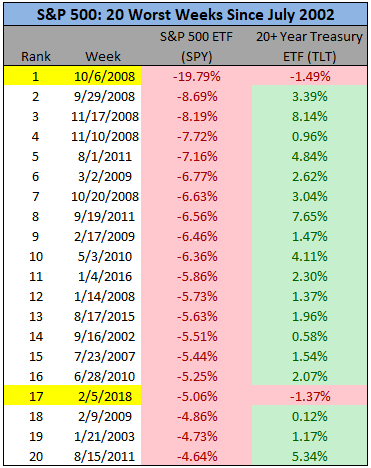 This was an unusual occurrence to say the least. Of the 20 worst weekly S&P 500 declines since July 2002 (inception of the long duration ETF), last week was only the 2nd time long duration Treasuries also finished lower.

Treasuries tend act as a safe haven during times of equity market stress, showing positive returns on average during the worst stock market declines. This tendency is amplified on the long end of the curve, as investors are often positioning for weaker economic conditions that coincide with falling interest rates. A precipitous drop in interest rates, of course, is the best friend of duration.

However, there are certain times when the very source of equity market anxiety is a rise in interest rates and potential inflation. During such times you can see stocks and long bonds fall together. We last saw this briefly in 2013 during the so-called “taper tantrum”…

The problem is particularly acute in the countries that were hit hardest by the sovereign debt crisis. Greece, which has yet to exit its bailout program, tops the list of non-performing loans as a share of total credit, while Italy has the biggest pile of bad debt in absolute terms.

European banks overall have cut their non-performing loans by more than 280 billion euros since the end of 2014. The European Central Bank, which supervises most of the bloc’s big lenders, says bad debt is still “a major problem” which has to be addressed lenders while the economy performs well. 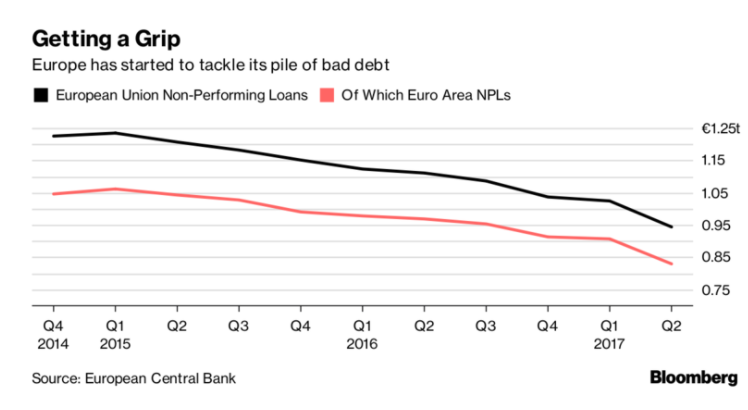 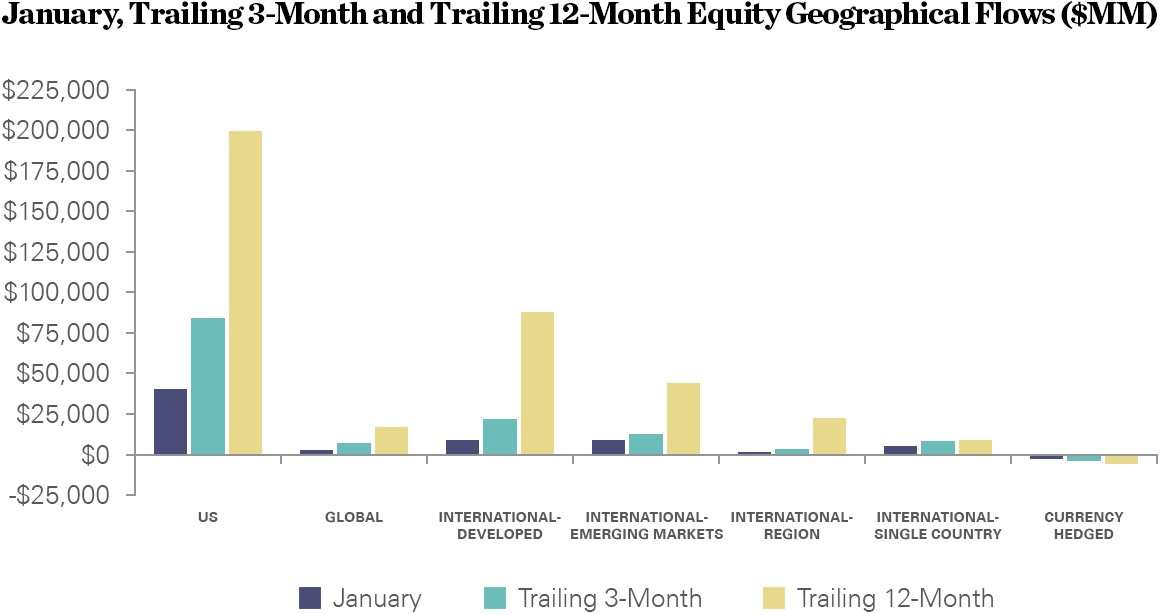 With a steady repricing of global bond markets having contributed to a sharp plunge in global stock markets, there could be a whiff of a new era in the air. Given the failure of both markets and central banks to forecast inflation accurately, we should all be humble about the level of precision attached to the timing or nature of the bond market’s next chapter. What we can say is that any such shift will likely be cyclical rather than secular.

After a material repricing of 10-year U.S. Treasuries since September 2017, four factors argue against an imminent regime change in major global bond markets.

First, market pricing of policy rate expectations appears reasonable in the context of a mature U.S. growth cycle and a gradually normalizing inflation environment. The U.S. futures market is now pricing roughly four additional rate hikes through January 2020. This is the first time since the Federal Reserve began publishing its “dot plot” (a projection of where it expects the policy rate will be in the long run) that market pricing has caught up with the Fed.

Second, global bond markets have become increasingly integrated – a spillover effect from post-crisis unconventional monetary policy across major central banks. The Bank of Japan (BOJ) and the European Central Bank (ECB), for example, have reiterated their commitment to loose monetary policies for the time being. Japanese and European overseas bond purchases could well constrain the cyclical repricing of other advanced economy bond yields.

Third, the effects of past quantitative easing matter. Central banks have removed large amounts of duration and convexity from the hands of private market participants. The stockpile of bonds held by these central banks is like a wet blanket thrown over past and potential sources of volatility.

Finally, the equity market correction seems to be a reaction to the lofty exuberance that followed U.S. tax reform and the remarkable strength of global growth. The reining in of extreme equity valuations likely will not stop bond yields from repricing gradually higher in line with the cyclical recovery, and in fact reduces the likelihood that the repricing becomes disorderly (thereby undermining an already mature recovery). 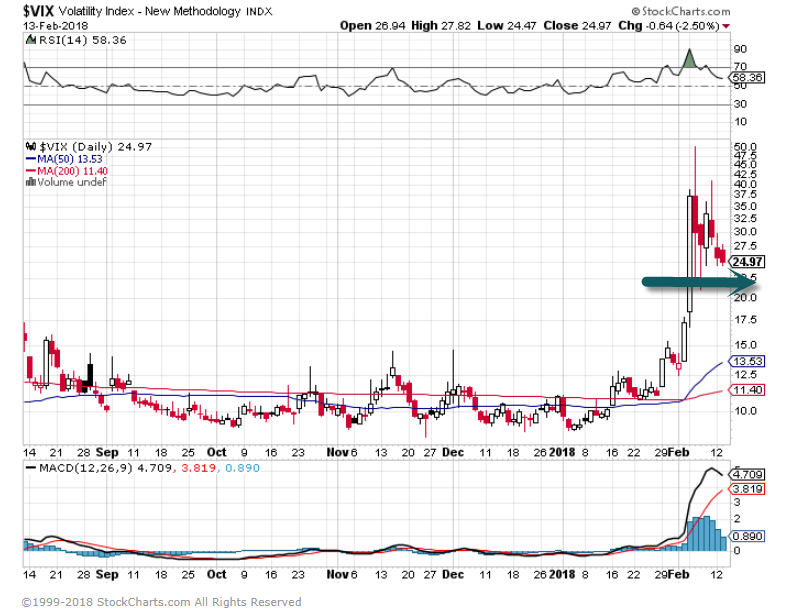 VIX spiked above 2016 highs now back in box 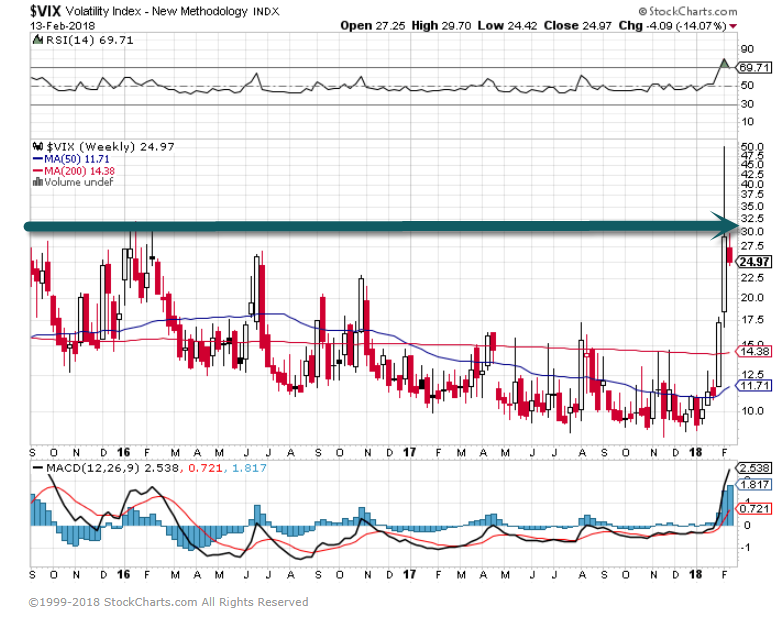 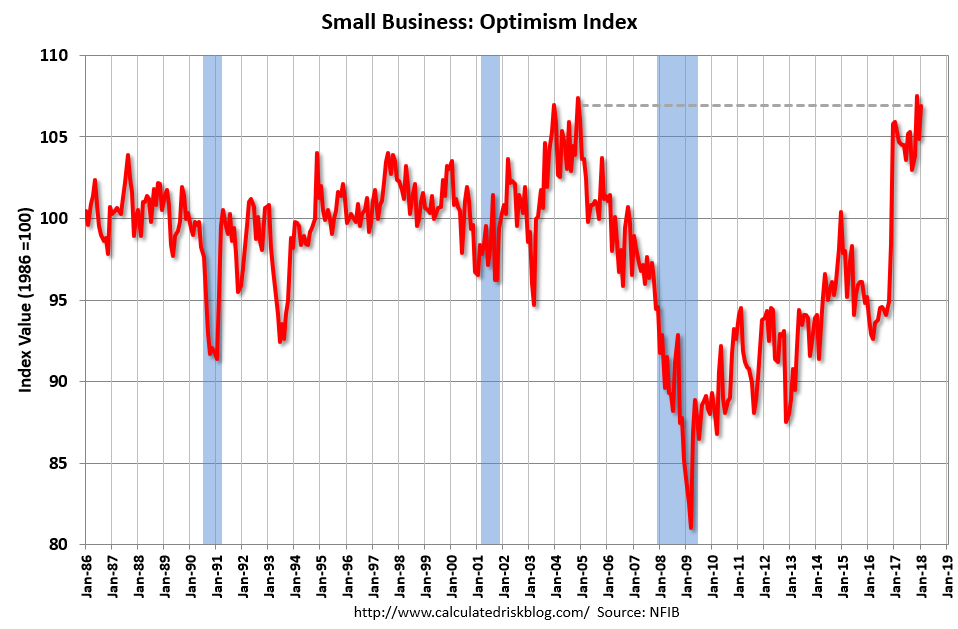 The selloff in retail property stocks over the past year has been so sharp that some mall operators now sport dividend yields greater than 15%, reflecting a widespread belief that the companies’ long-term prospects are bleak.

But at a time of rising wages, lower taxes and increasing consumer spending, mall owners’ bloated dividends are starting to intrigue investors.

While the portfolios of “class B” malls aren’t as profitable as top-tier malls, the properties are still productive and usually serve communities with considerable spending power, analysts said.

KARS focuses on companies engaged in one or more of the following sub-industries: electric vehicle production, autonomous driving, shared mobility, lithium and/or copper production, lithium-ion/lead acid batteries, hydrogen fuel cell manufacturing, or electric infrastructure. Selected stocks are sorted into tiers by market capitalization; the largest tiers get the most weight, but holdings are equal-weighted within the tiers. In terms of sector exposure, the portfolio is heavily weighted toward consumer discretionary and information technology names. KARS charges a fair expense ratio in light of its specialized focus and limited competition.

9.Bring in the BOTS to Cure Cancer.

Science fiction no more — in an article out today in Nature Biotechnology, scientists were able to show tiny autonomous bots have the potential to function as intelligent delivery vehicles to cure cancer in mice.

These DNA nanorobots do so by seeking out and injecting cancerous tumors with drugs that can cut off their blood supply, shriveling them up and killing them.

DNA nanorobots are a somewhat new concept for drug delivery. They work by getting programmed DNA to fold into itself like origami and then deploying it like a tiny machine, ready for action. 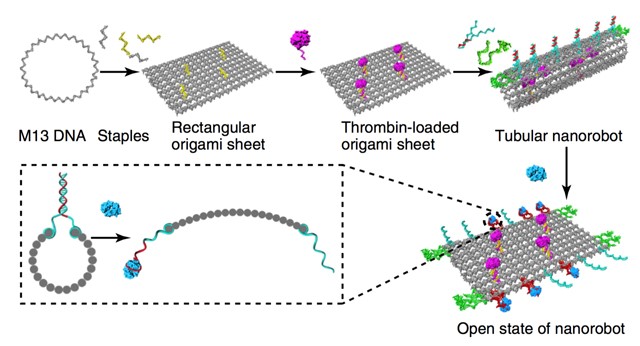 The scientists behind this study tested the delivery bots by injecting them into mice with human breast cancer tumors. Within 48 hours, the bots had successfully grabbed onto vascular cells at the tumor sites, causing blood clots in the tumor’s vessels and cutting off their blood supply, leading to their death.

Remarkably, the bots did not cause clotting in other parts of the body, just the cancerous cells they’d been programmed to target, according to the paper.

The scientists were also able to demonstrate the bots did not cause clotting in the healthy tissues of Bama miniature pigs, calming fears over what might happen in larger animals.

The goal, say the scientists behind the paper, is to eventually prove these bots can do the same thing in humans. Of course, more work will need to be done before human trials begin.

Regardless, this is a huge breakthrough in cancer research. The current methods of either using chemotherapy to destroy every cell just to get at the cancer cell are barbaric in comparison. Using targeted drugs is also not as exact as simply cutting off blood supply and killing the cancer on the spot. Should this new technique gain approval for use on humans in the near future it could have impressive affects on those afflicted with the disease.

Marty Nemko Ph.D.How To Do Life

Tips on Management and Leadership

Here are what I hope are some valuable yet not-obvious tips from my new book Careers for Dummies on how to be an effective, even beloved manager or leader.

Same with your employees. Subject to union rules or other mandates, explain that your definition of treating employees fairly is not to treat them equally but so as to bring out the best in each person; Some employees may need more autonomy or less, more structure or less, more fiscal monitoring or less, more cognitively complex work or less, and even, yes, more work or less. One-size-doesn’t fit-all management will maximize the likelihood of your workplace “garden” bearing lots of flowers and fruit.

I wish we lived in a world in which success were determined purely on substance but, alas, that’s not planet Earth. Yes, some respected leaders aren’t charismatic, for example, Proctor and Gamble’s A.J Lafley and even Benjamin Franklin who was so uncomfortable giving talks, he would read from a script.

But in general, sizzle matters. Cosmopolitan founder Helen Gurley Brown said, probably only half joking, “After 40, it all comes down to posture.” So yes, stand straight, shoulders back, chin up although not so high that you look stuck up. Stride, don’t trudge. Display good but not excessive energy—Yelling while gesticulating is not charismatic.

While acknowledging problems and proposing solutions, err on the side of positivity.

Speak humanly. If you need to write a script, do so but then reduce that to a few signpost words, practice if needed, and then ad-lib your talk. That helps ensure chemistry. If you memorize or read, chemistry, credibility and authenticity are leached.

Many employees complain of excessive meetings. When you need group input or want people’s reports, email is normally wiser than a meeting. There are two main reasons for a meeting: when real-time group input is needed and for esprit de corps. The latter justifies an infrequent standing meeting, perhaps monthly.

Speaking of standing, literal standing meetings can be effective: A 15 to 20 minute meeting in which everyone stands can literally and figuratively keep people on their toes. Another boon to crisp meetings is to send attendees a tight agenda in advance and keep to it unless there’s a darn good reason. And, where feasible, hold meetings right before lunch or quitting time. People will want to finish on time.

A final tip, Today’s zeitgeist venerates inclusion, so there’s a temptation to invite more than fewer people to meetings and to try for consensus on most issues. But that leads to turgid meetings and, usually, lowest-common-denominator solutions: a tepid one that everyone can agree on. The wise leader usually invites only the truly needed participants and truncates discussion of agenda items when the point of diminishing returns has been reached and renders a decision, acknowledging the group’s input. That’s crisp leadership.

Crisp: That is an important descriptor of the great manager and leader.