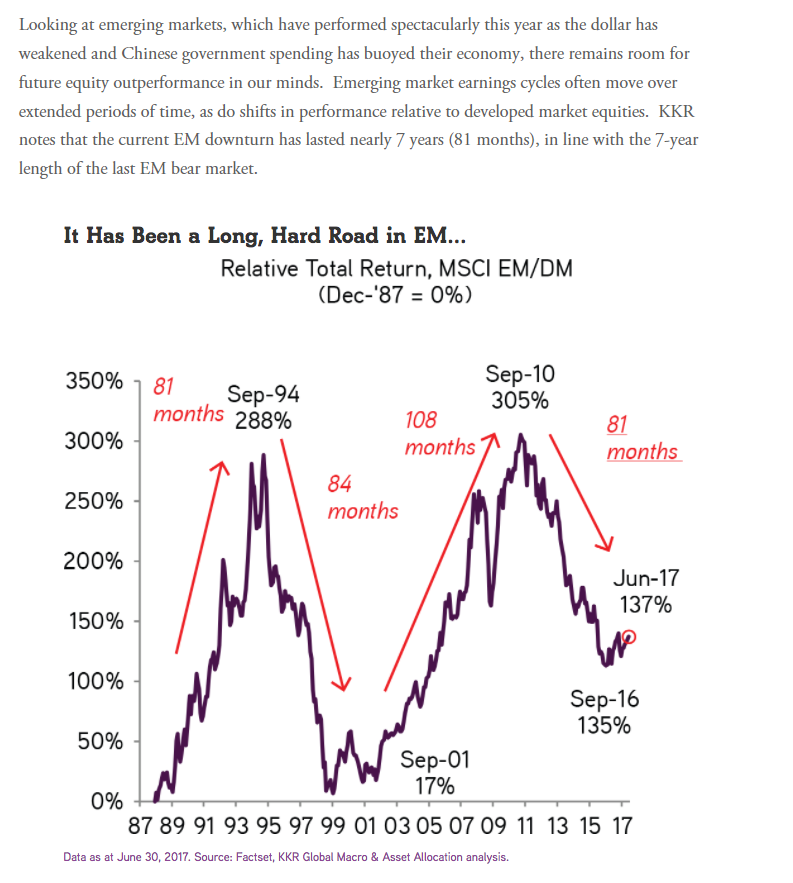 2.Remember All the Talk About Greece Going Under….

Greece ETF doubles off bottom….Breaks thru red downtrend line going back to 2013 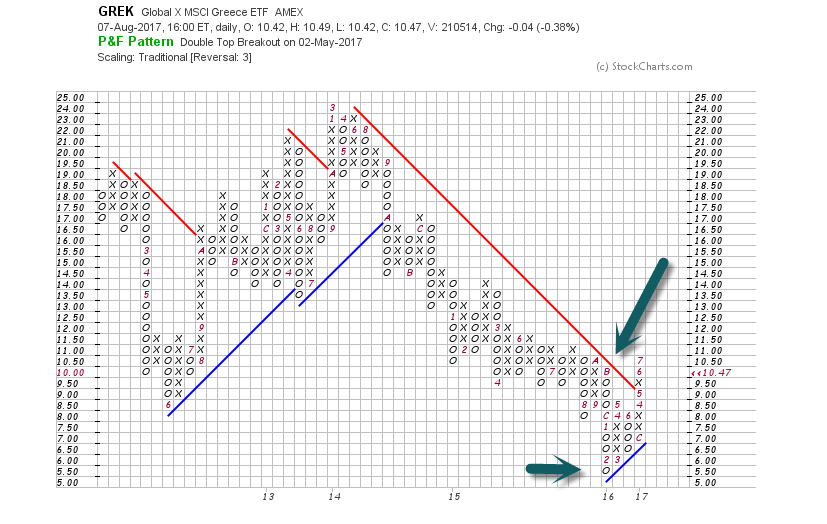 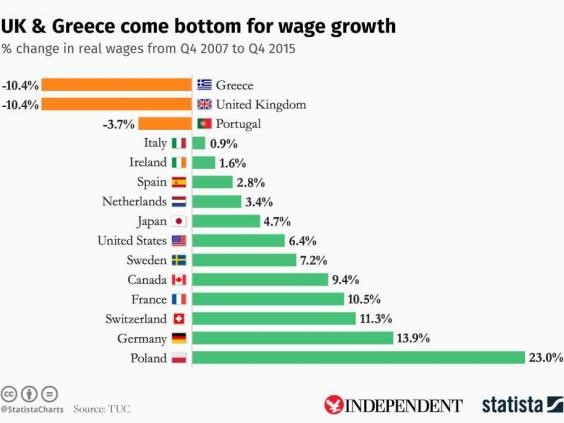 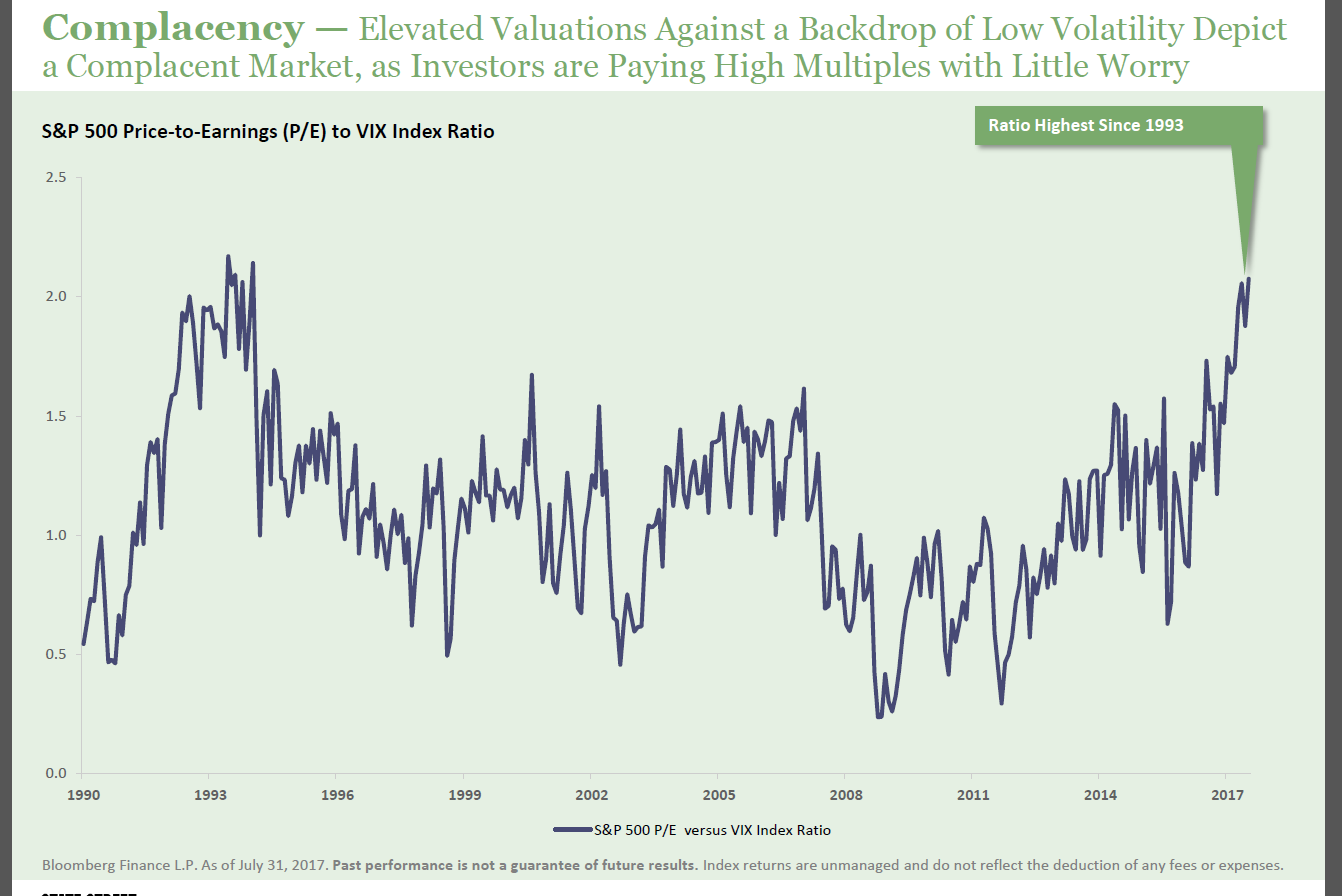 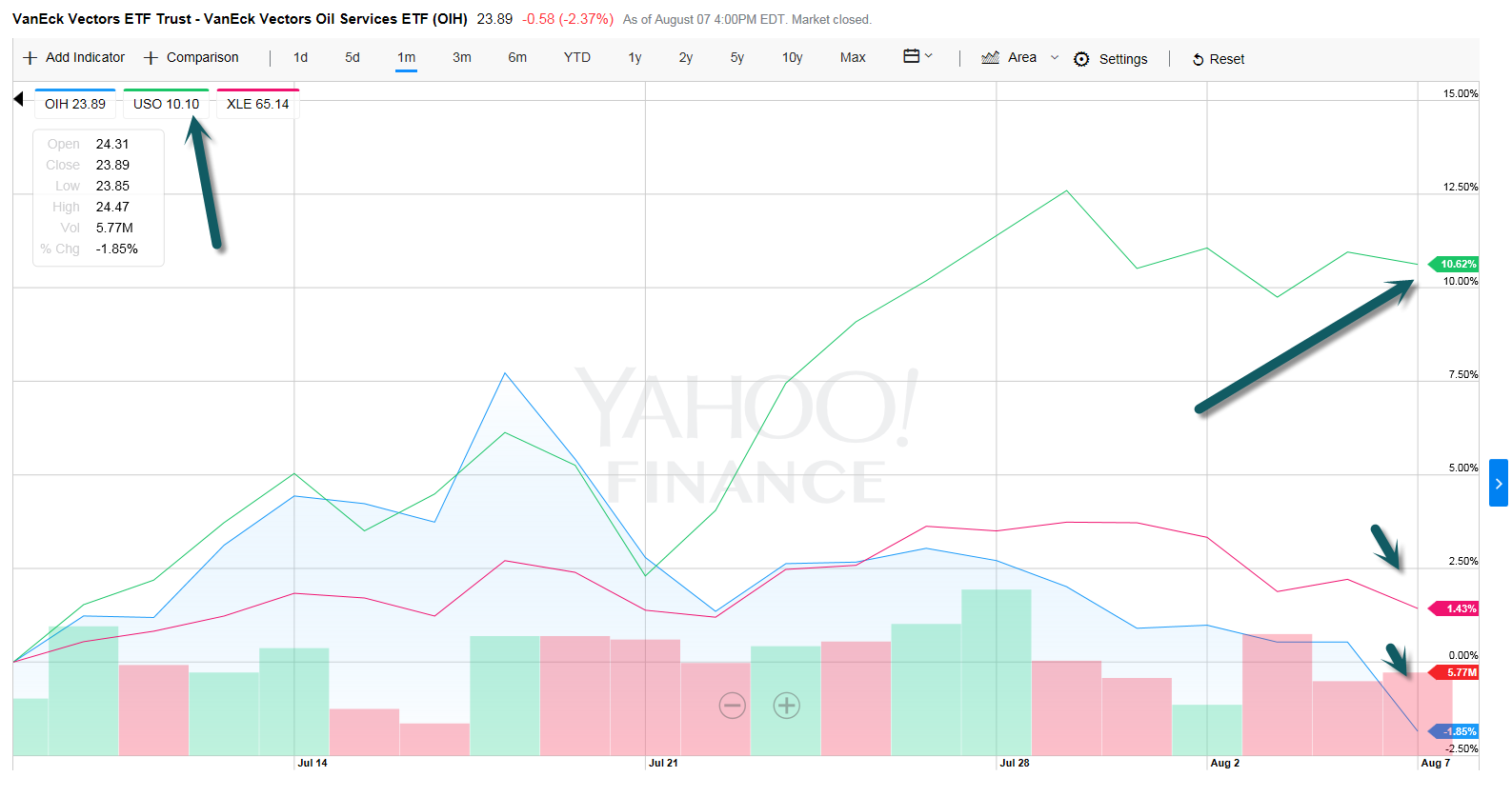 The Permian basin is starting to see decline rates from shale wells accelerate, a trend that could be the result of too much drilling.

Shale wells suffer from steep decline rates. A rush of output occurs at first, but almost immediately after the well comes online, the flow rate drops off precipitously. And within just a few months the well is a shadow of its former self. That is typical.

But putting a bunch of wells close to each other can induce even steeper decline rates than normal because they can rob pressure from each other. If that occurs, the wells can suffer irreparable damage, and ultimately, the volume of oil and gas that can eventually be recovered could potentially be permanently diminished.

Such a scenario appears to be playing out in the U.S. shale patch, with the white-hot Permian, in particular, falling victim to what is a byproduct of such a massive boom in activity. Bloomberg reports that the decline rate from “legacy” wells – those already online – is accelerating rapidly, the consequence of over-drilling in certain areas.

In fact, the legacy decline rate in the Permian has accelerated from around 100,000 bpd month-on-month in 2015 and 2016, to a month-on-month decline of 154,000 bpd most recently. In other words, the Permian will see legacy wells lose 154,000 bpd from July to August, which means that shale drillers will have to drill at least as much just to stay flat. The EIA projects that the industry will add 218,000 bpd of new gross supply in the Permian in August, leading to a net gain of 64,000 bpd. 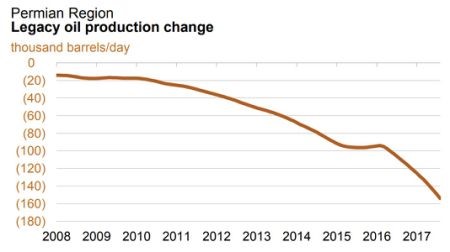 6.Petroleum Goods Exports Positive or the Trade Deficit would be Much Worse. 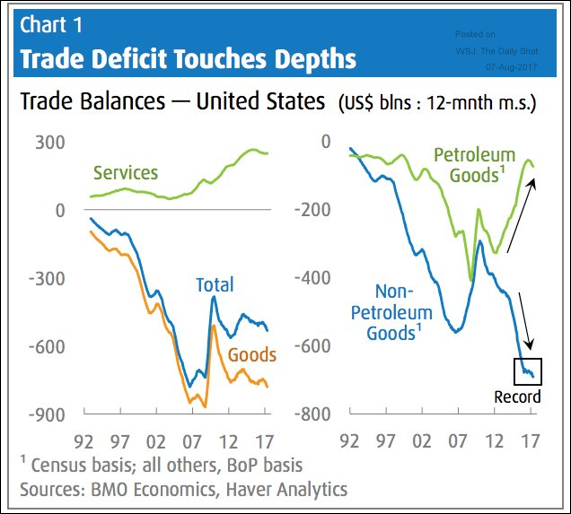 Berkshire Hathaway Inc., the conglomerate he’s run for more than five decades, reported Friday that it held just shy of $100 billion in cash at the end of the second quarter.

Either he’s about to “fire the elephant gun” at an acquisition, or he’s nervous. Or both? Either way, hard to earn a return on all that cash…

8. Airnub is Now the Biggest Hotel Company in World. 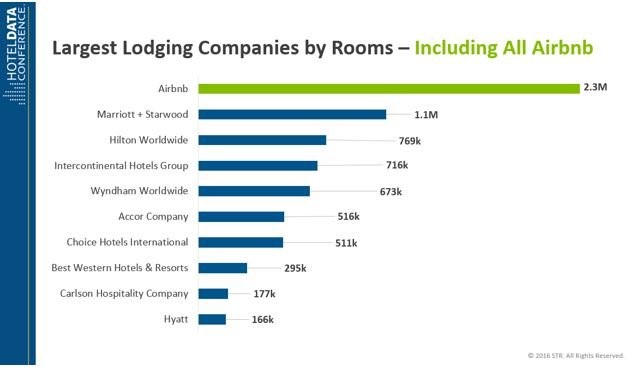 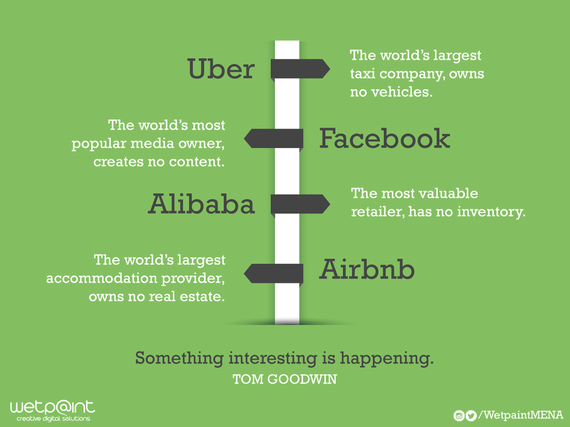 9.Must read article on how our lives will change dramatically in 20 years.

The following points are taken from Udo Gollub, the CEO of 17 Minute Languages

Brought to you by http://www.growyourclicks.com/p/introduction

Success is not extrinsic… It’s not measurable.

“Success” can only truly occur internally, because it is based on emotion. At the most basic level, success is your relationship with yourself. Most people are living a lie. They purposefully ignore and distract themselves from what they deep down want for themselves.

Many people want something more for themselves. They have dreams and ambitions. Yet, few of these people ever get what they intended.

Only those who are truly committed will become a new and different person in order to live their commitment.

The Myth Of The “Unchanging” Self

“Become a millionaire not for the million dollars, but for what it will make of you to achieve it.” — Jim Rohn

Interestingly, in our Western Culture, we falsely emphasize fixed traits and “personality” types. We believe very strongly in an unalterable “nature” which is uninfluenced and untouched by the environments in which we reside.

We believe something about us is self-contained, and exists outside of space and time. This is individualism at it’s finest, and it leads us to believe in some theoretical and “true” version of ourselves, which cannot and does not change.

The truth is that you are always changing. Your brain and even biology are highly malleable. Your worldview is continually integrating new information. When you change a part of any system, you change the whole. Thus, overtime, as you have new experiences, surround yourself with new people, and learn new things, you emerge as a new person. Yet, these changes occur gradually and in real-time, and thus are almost impossible for you to notice.

Yet, as you learn new things overtime, your brain literally creates new connections and is reshaped. The brain you will have in a year from now will literally be a different brain than the one you have now. Especially if you consciously reshape how you see and live in the world.

Consequently, when you become fully committed to something, you throw the individualistic myths away. You are part of a dynamic system that is constantly changing.

When you’re committed, you stop justifying mediocrity in the name of authenticity.

You stop lying to yourself about what you want and what you believe in.

You create an environment that facilitates your commitment, because you know that as a person, you take on the form of your environment. The only agency you truly have is to choose the influences that shape you, both internally and externally.

If you’re not committed, you rely on willpower. You remain indecisive. You leave things up to chance.

You leave yourself outs. You never fully decide.

When you’re not committed, you live in a continual state of self-hatred and internal-conflict. Over and over and over, you watch yourself consciously behave in ways that oppose your highest ambitions.

Only Those Who Are Committed Succeed

Being ambitious isn’t honorable. Wanting more for your life is a common desire.

But being completely committed to something is not common. It’s rare. It’s rare because commitment requires, in the words of T.S. Eliot, “nothing short of everything.”

The hardest thing you will give up is the false idea of what you think you are. You have no clue what you are. More importantly, there is no “you” that is fixed and permanent, only the individualistic idea you have of yourself.

This “authentic” self is your worst enemy. It’s the excuse you have for not evolving. It’s your justification for not committing to something bigger and better. It’s the chain around your neck, stopping you from putting yourself into situations that will demand you become a better version of you.

As researcher and professor, Adam Grant, has said, “But if authenticity is the value you prize most in life, there’s a danger that you’ll stunt your own development… Be true to yourself, but not so much that your true self never evolves.”

This article was originally published on Medium

About the Author: Benjamin Hardy was the #1 writer on Medium.com in 2016. He is a husband and father that writes about self-improvement, motivation, and entrepreneurship. His writing is fueled by his personal experiences, self-directed education, and formal education.