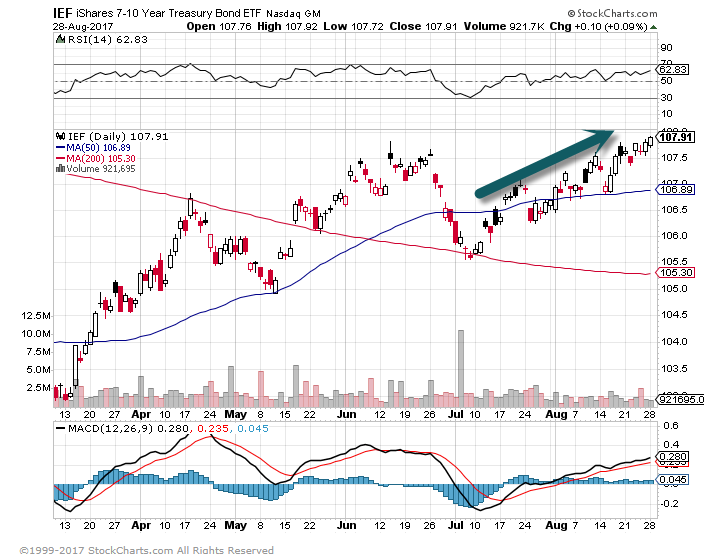 RED FLAG? – Insiders at the big six banks by assets — JPMorgan Chase, Bank of America, Wells Fargo, Citigroup, Goldman Sachs and Morgan Stanley — have in total sold a net 9.32m shares on the open market since the turn of the year. Even excluding Warren Buffett’s big dumping of shares in Wells in April, to avoid tripping over rules capping ownership by a non-bank, sales by insiders outnumber purchases by about 14 to one.

Thanks to Dave Lutz at Jones for stats. 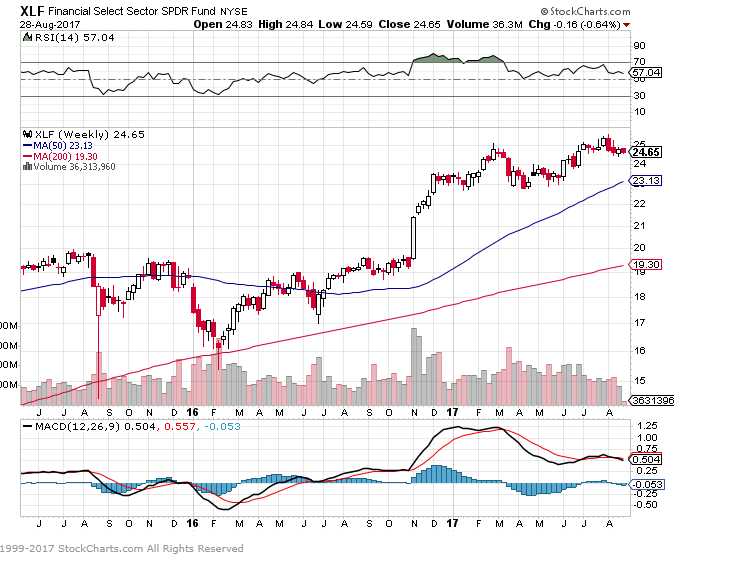 WSJ.Desperate for something that pays better than basic government bonds, insurance companies, asset managers and affluent investors are scooping up investments like synthetic CDOs, bankers say, which had largely become the preserve of hedge funds after 2008.

Structured products accounted for nearly all the $2.6 billion year-over-year growth in trading-division revenue at the top 12 global investment banks in the first quarter, according to Amrit Shahani, research director at financial consultancy Coalition.

Mr. Champion said he has to lay down only around $1 million in upfront margin costs on a $100 million trade of this kind.

“The cost of leverage in the derivatives space is very low,” he said. 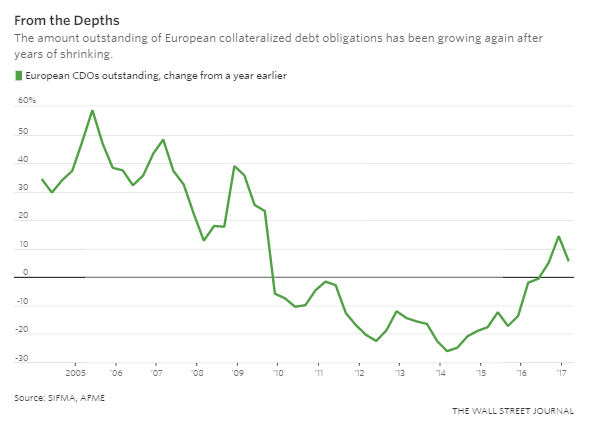 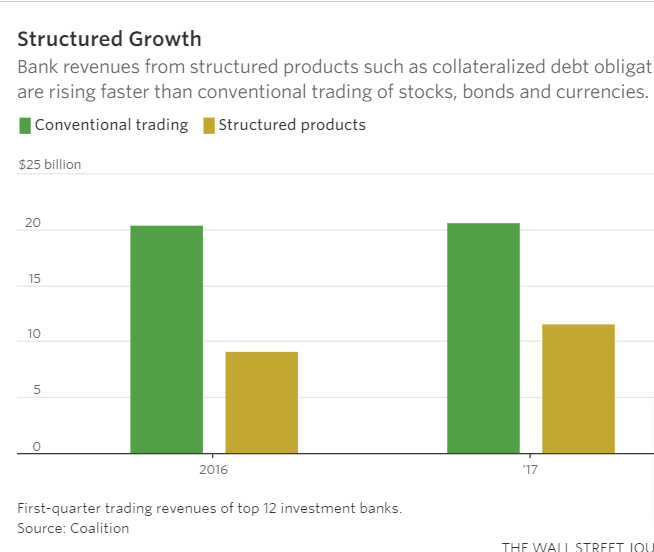 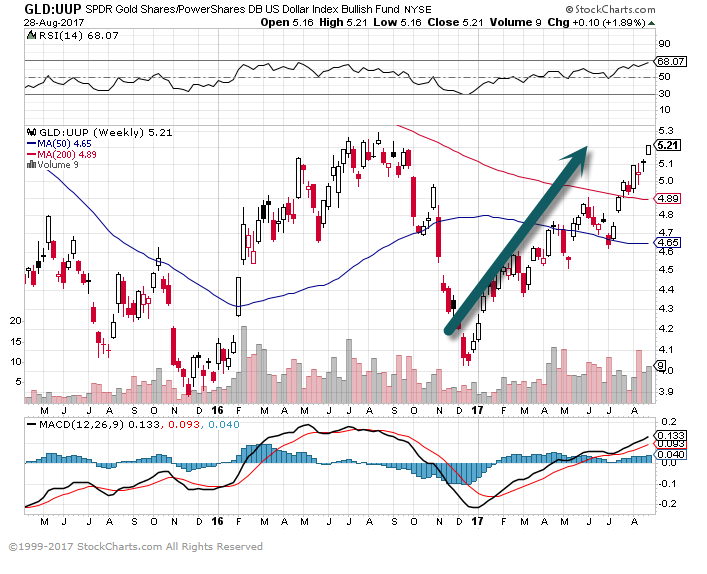 Today’s 63.7% US homeownership rate* (down from 69.1% 12 years ago) is propped up by a very high homeownership rate for those aged 65+ who bought their homes many years ago. They benefited from a strong economy, more affordable housing during their working years (even adjusting for mortgage rates and inflation), and 100% down payment programs for veterans.

Not surprisingly, the percentage of households who own their home rises as incomes rise, as shown in the chart below. For those executives who have to forecast housing demand, and homeownership demand in particular, note that the median-income household (after taking out retirees) makes about $64,000 per year, and only 58% of those households own a home. This will drive homeownership down over time. 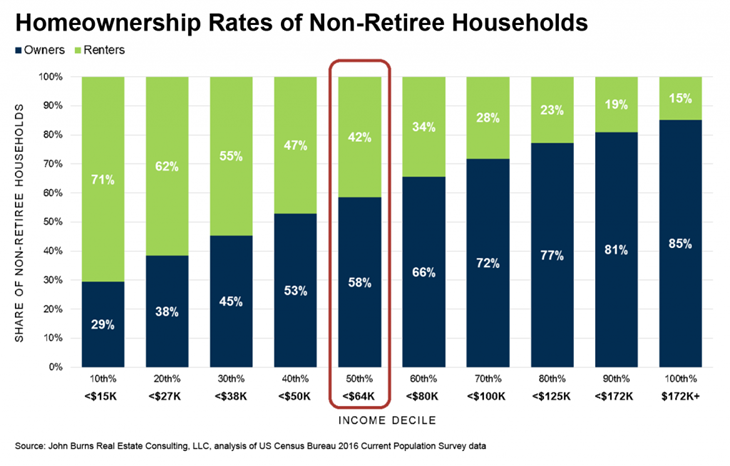 Low incomes are just one of many reasons why we forecast homeownership to fall below 61% by 2025. The 80%+/- homeownership rate of those who pass away over the next eight years will be the biggest drag on homeownership. As we note in our book, the Four Big Influencers (government policies, the economy, new technologies, and shifts in societal preferences) could impact this forecast positively or negatively. We monitor all four influencers very carefully to help executives plan their business decisions.

*Homeownership rates as reported by the U.S. Census Bureau’s Housing Vacancies and Homeownership Survey. We do not believe that the recent rise in the homeownership rate is correct, as it was driven partially by the Census Bureau reporting an increase of only 558,000 occupied housing units in the last year, which is far too low

Millennials are finally starting their own baby boom and heading for the suburbs in big sport utility vehicles, much like their parents did.

Americans aged about 18 to 34 have become the largest group of homebuyers, and almost half live in the suburbs, according to Zillow Group data. As they shop for bigger homes to accommodate growing families, they’re upsizing their vehicles to match. U.S. industry sales of large SUVs have jumped 11 percent in the first half of the year, Ford Motor Co. estimates, compared with increases of 9 percent for midsize and 4 percent for small SUVs.

“We do see that demographic group driving larger sport utility sales as they acquire homes, create families and gain some wealth,” said Michelle Krebs, an analyst at car-shopping website Autotrader. “They started with compact sport utilities and now, with families, they’re moving up.”

The shift to suburbia may surprise those who’ve chided millennials for being more interested in pricey avocado toast than in saving for a home. Much of the generation delayed marriage, childbearing and home ownership after graduating with heaping student-loan debt and entering a weak job market. As more millennials overcome this, many want the life of their baby-boomer parents — the kids, the house in the ’burbs and the beefy SUV.

“As more people move out of their parents’ basement — and there’s still quite a few living there — we expect to see continued healthy demand for homes,” said Svenja Gudell, chief economist for Zillow, which found millennials made up 42 percent of homebuyers last year. “Millennials delayed home ownership, just like they delayed getting married and having kids, but now they’re making very similar decisions to their parents.” 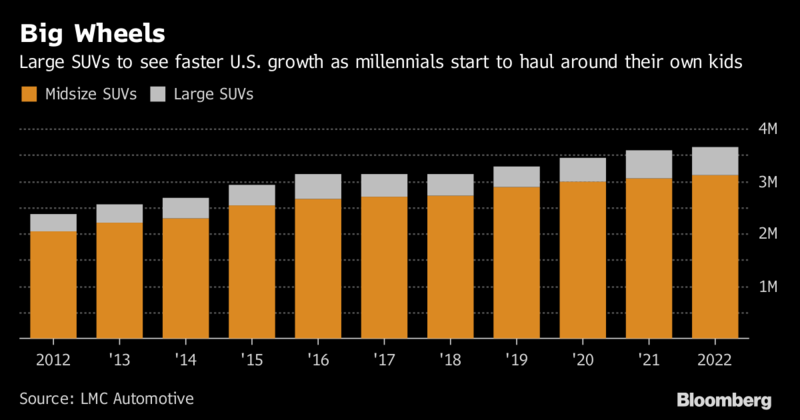 8.This Toxic Practice Is Killing Your Team’s Morale. Here’s How to Stop It

Are you allowing it to happen, and if so, why?
CREDIT: Getty Images

There is a trend in leadership across the world, and I see it every week in my travels. It is a toxic practice that can kill morale, damage credibility with employees and have a negative impact on productivity.

If you don’t do anything about it, this one practice could destroy your company.

It’s a leader who stands in front of a conference room talking about company values like respect and kindness, when everyone knows that same executive screams at employees and calls them names.

It’s the leader who makes managers and supervisors go through trainings on motivation and appreciation, yet never shows appreciation to his own team. He might attend a training to introduce the program, and then he leaves the room.

It’s the leader who appears in a company video, smiling and talking warmly about how “every employee’s contribution matters,” but often refuses to even talk to the “little people.”

It’s the leader who writes in the annual report that team spirit drives the success of the entire organization, even though he has many teams fighting each other within the organization.

All over the country, wherever I’m facilitating a leadership program, there is always one person who asks: “Excuse me, I may be out of line, but come the people that should be in this class aren’t here?”

When I ask who they mean, they inevitably say, “our senior leaders.”

How do we solve this problem?

Board members have to demand that executive leaders act in ways that align with company values. If there is an issue, executives should first be directed to take part in training or executive coaching to correct the inappropriate behavior.

If leaders still can’t behave, they should be fired. I wrote about this last month, after Uber took action with leaders who were not behaving appropriately.

The company that takes action should be applauded for doing so, but should also question why such terrible behavior was allowed to continue for so long.

Leaders should be role models.

Companies have to make sure that executive leaders are modeling the behavior they expect from employees. This behavior has to be professional and beyond reproach.

There is no place for a leader who exemplifies “do as I say, not as I do.” If leaders don’t “walk the talk,” employees will think, “I don’t know why I should behave a certain way when our executives don’t even do it!”

Have one class of employees.

Some companies have an “employee class” of people and an “executive class” of people. It’s not said directly, but it is painfully obvious there is one set of rules for employees and a different set for executives.

This destroys trust and morale.

As actor Misha Collins once said, “I actually think that the most efficacious way of making a difference is to lead by example, and doing random acts of kindness is setting a very good example of how to behave in the world.”

As a leader, the kindest act is consistency. Anything else is hypocritical.