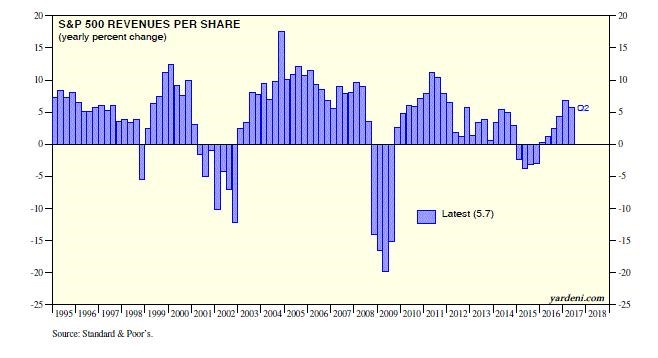 A big part of Strategas’ argument stems from the fact that the period against which current earnings are compared — the first half of 2016 — was notably weak. And that, in turn, pushed year-over-year growth to unsustainable levels.

As the chart below shows, Wall Street is not bracing for the decline. Its estimates are represented by the blue columns, which show continued profit expansion over the next two quarters. Strategas has other ideas. Adjusting for historical factors, the firm sees earnings growth declining over the period before being cut almost in half by the first quarter of 2018, as indicated by the red columns. 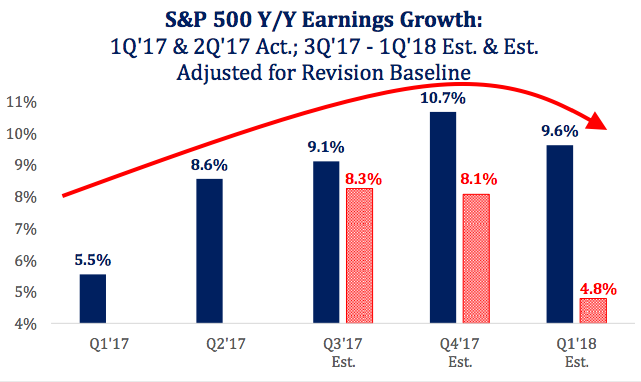 Strategas is bucking Wall Street estimates and forecasting a decline in earnings growth over the next two quarters.Strategas Research Partners

“Last year’s easy comps become this year’s tougher comps starting now, so the natural progression is for the growth rate to slow,” Nicholas Bohnsack, the president and head of quantitative research at Strategas, wrote in a client note. “Adjusting prevailing estimates for the historical revision baseline, which is negative, shows earnings growth falling to mid-single digits rates by next year.”

“This is not to say earnings will begin to decline straightaway, but they will mathematically increase at a decreasing rate,” he continued. “This progression is typical of a late-cycle profit re-acceleration running out of steam.”

Strategas is also keeping an eye on revenue growth, as well as how gross domestic product is faring. According to the firm, the two metrics “look toppy,” suggesting that a downturn may be imminent. As seen in the chart below, both have pulled back slightly in recent months. 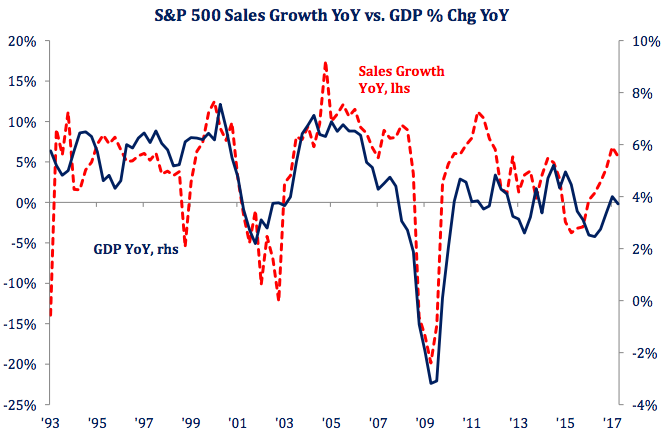 3.The Weak Dollar Is Boosting Profits

We don’t have every last number in yet, but we’re very close, and it appears that the S&P 500 had operating earnings of $30.73 for Q2 (that’s the index-adjusted figure). That’s an all-time record. It also represents an increase of 19.6% over last year’s Q2.

This is very good news because there had been growing concerns that the corporate sector was in danger of a slowdown. Instead, this was the fourth quarter in a row of growing earnings. Before that, the S&P 500 went through a nasty earnings recession that lasted seven quarters. What’s important to understand is that earnings are being helped by expanding profit margins. That’s a good sign. For Q2, operating margins topped 10% for the first time since 2014.

The second quarter was also notable because earnings estimates weren’t severely slashed before earnings season. You’ll see that a lot. Estimates will plunge low enough for the results to barely claim an “earnings beat.” Lower the bar far enough so you can step over it. It’s true that earnings estimates almost always start out too high, but the results for Q2 were only 4.7% below the estimate from the beginning of the year. That’s pretty good. Right now, the estimates for Q3 are only 2.7% below where they were at the start of the year. The slashing-estimates game seems to have passed.

So far, 71% of S&P 500 companies have beaten expectations for Q2. Less than 7% of tech stocks missed on earnings. That’s impressive, but the biggest reason for the earnings resurgence is the energy sector. The energy sector went from earning $42.94 per share in 2014 to losing $13.71 in 2015. (Again, these are index-adjusted figures, but in this case, it’s to the S&P 500 Energy Index.) That threw the entire earnings picture for the S&P 500 out of whack. Now energy profits are back, and the overall picture looks much better.

What’s happening is that we’ve gone from a period where the strong dollar was distorting corporate earnings to now where the weak dollar is helping the bottom line. It comes down to this: Europe’s economy is trailing by about three years. All of what Mr. Draghi is doing, and has been doing, comes largely from Mr. Bernanke’s playbook.

A few years ago, we were growing, and the Europeans were stuck in a rut. As a result, the dollar rallied, and rates in Europe went negative. Now Europe is much better, so the euro is up and the dollar is down. In fact, Draghi is talking about how he wants to exit all that yucky QE and ZIRP stuff. I don’t blame him. If there’s any big news from Jackson Hole this weekend, it’ll probably be from Mario instead of from Janet.

The key takeaway is that the investing environment continues to be favorable for investors. But remember that the weak U.S. dollar is being a big help for us. Now let’s look at our recent earnings reports. 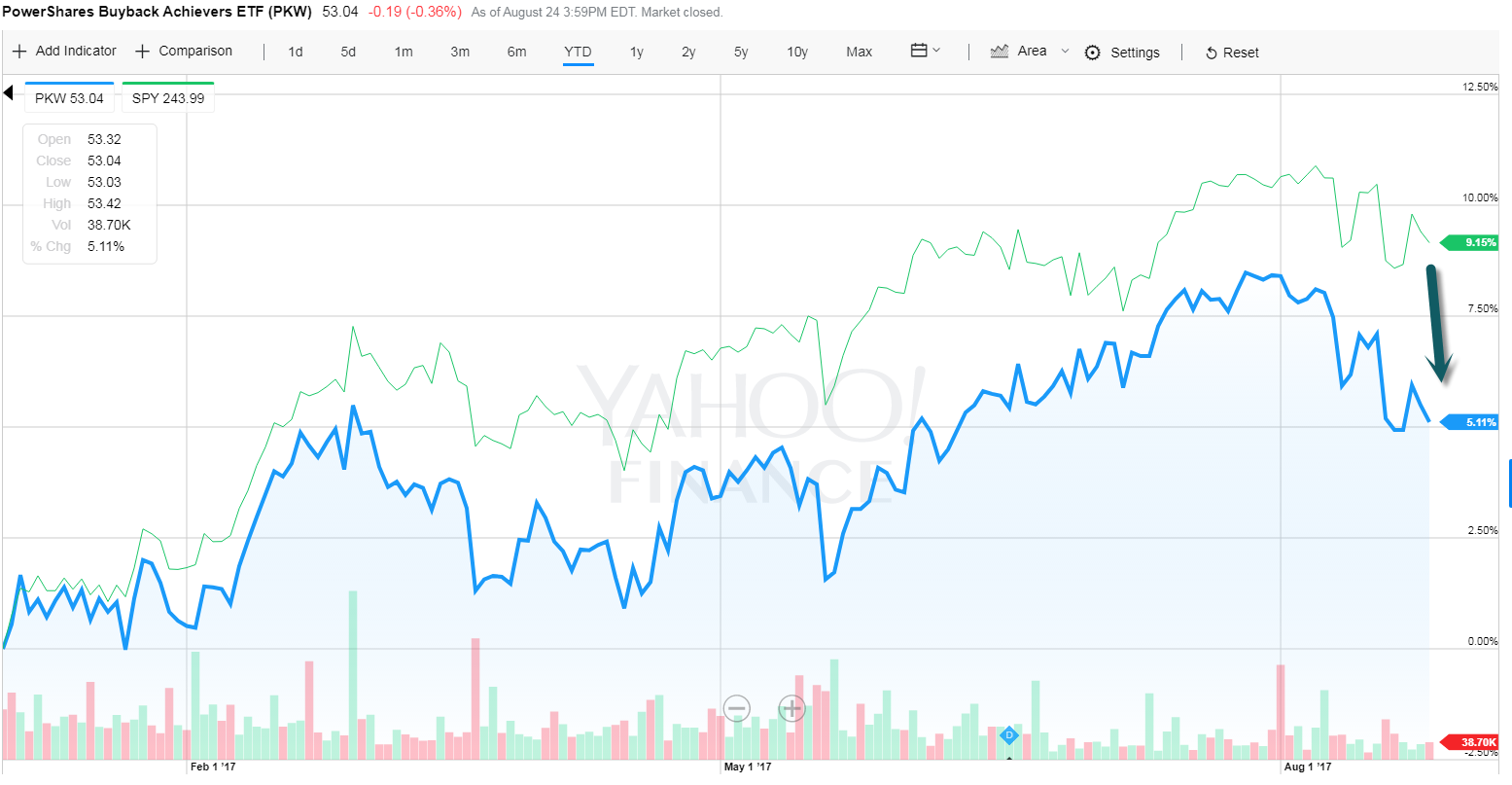 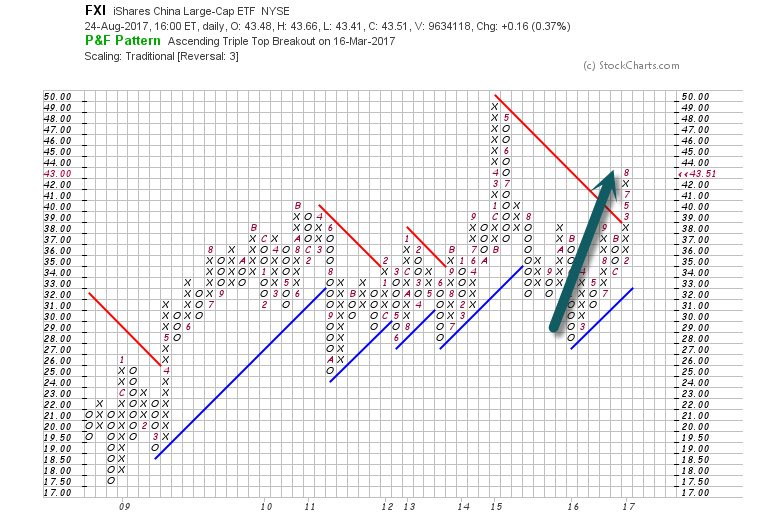 The fortunes of the 40 Chinese billionaires on the Bloomberg Billionaires Index have surged 46.8 percent since yearend, dominating the wealth gains of all nationalities and sending their combined net worth to $417 billion. 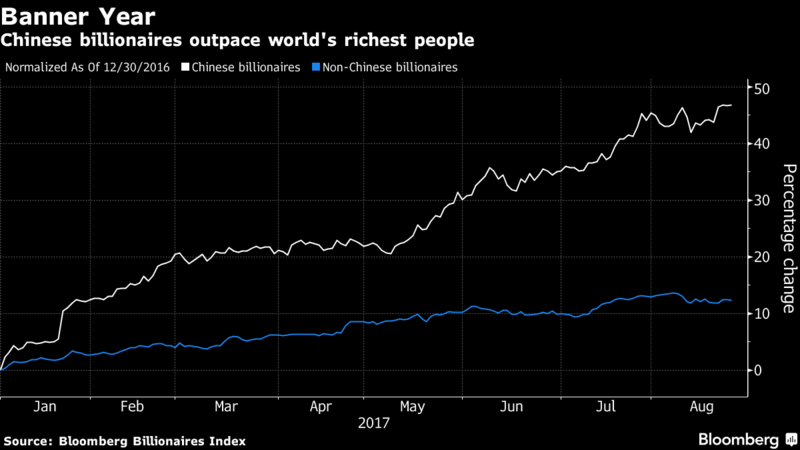 While accounting for less than 1% of completed deals in 2017, unicorn financings represent roughly 21% of deal value
After eight unicorn exits this year, 120 US companies remain with the distinction More than $156 billion has been created in unicorn valuations this year 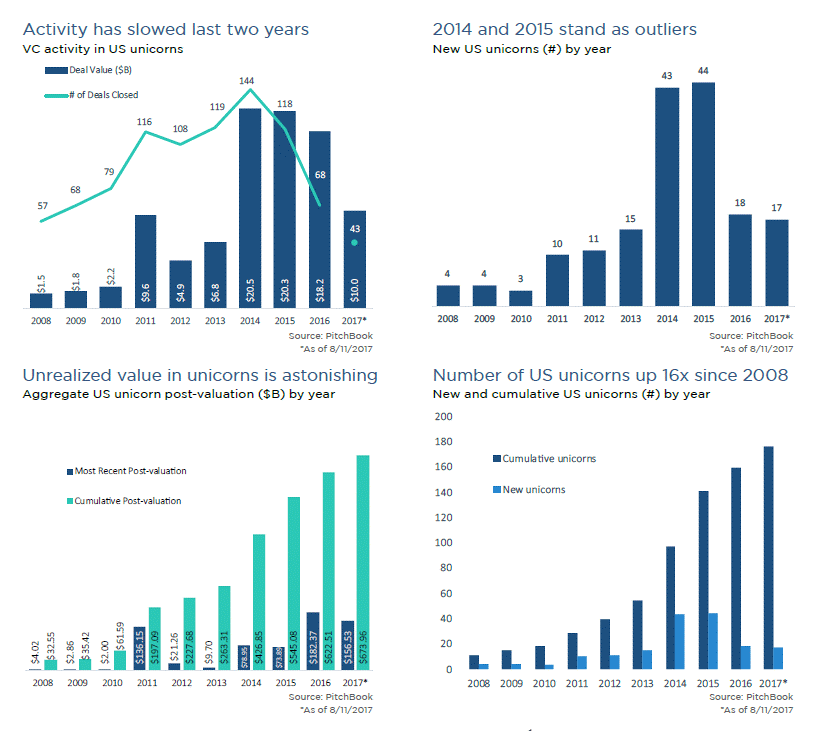 It used to be that a weekly reading for initial jobless claims that came in below 300K was a big deal.  Nowadays, sub-300K readings don’t even raise an eyebrow as the new 300K is 250K.  In this week’s report, first-time jobless claims came in at 234K compared to estimates of 238K.  Not only is that better than expected, but it also marks the 12th straight week that jobless claims have been at or below 250K.  It’s hard to overstate just how impressive this trend is. 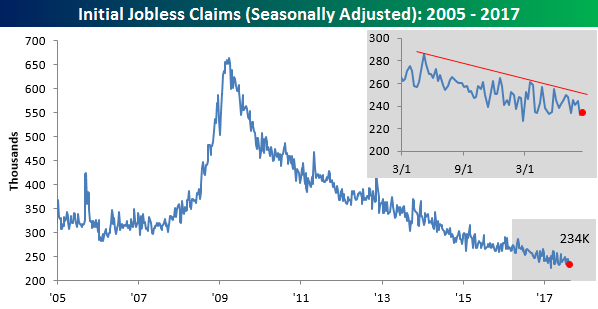 With this week’s second straight sub-240K print, the four-week moving average is also back below 240K and less than 3K from the cycle low of 235.5K made back in mid-May.  While the 4-week average is close to a new low, in order to get there next week, we will have to see a print below 232K. 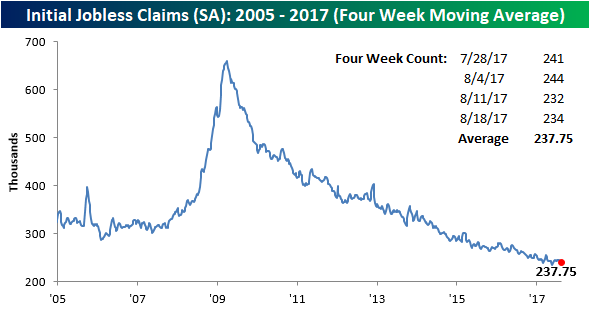 9. The most popular cities where house hunters want to move right now

Homebuyers apparently have their eyes on Colorado.

Colorado Springs, Colo., is the city that will likely have the most home sales in the third quarter, according to an analysis by ATTOM Data Solutions, a data firm that specializes in real estate, based in Irvine, Calif. Next on the list were Chicago, Washington, D.C., Reno, Nev., and Lexington, Ky. In some of the nation’s hottest housing markets, there was more interest in counties farther away from jobs but with more affordable homes, said Daren Blomquist, a senior vice president at ATTOM.

The company’s “Pre-Mover Housing Index” is based on the number of purchase loan applications for residential real-estate transactions across the country. ATTOM then compares the number of homes with a “pre-mover” flag, indicated by those loans, to total homes in a given area. Historical data shows 59% of homes with “pre-mover” flags sell within 30 days of the estimated loan settlement data provided, and 76% sell within 90 days.

Give your personal productivity a jolt today!

1.   You have time for whatever you want to have time for. If it matters, make time for it that allows you to make progress with as little friction as possible.

2.   Leave a bottle of water where you’ll drink it first thing when you wake up. (I leave mine in the bathroom.)

3.   Use fewer tools so you can use them to their fullest.

4.   Take one day off a week from social media. If you feel the need to post daily, then schedule one day’s worth in advance.

6.   You can find really good decaffeinated coffee. When you find one, start drinking it more than your caffeinated stuff.

7.   Never forget to turn on your email vacation message…and preferably do so the day before you go on vacation. And be sure to send this email before you leave for vacation.

8.   Don’t take your lunch breaks at your desk.

9.   Always keep a set of workout clothes packed in your suitcase.

13.               Your calendar outlines the broad strokes of your day. Your to do list dives into the details. You need both to be able to pay attention to your intentions.

17.               Keep a book on the same table where you keep your TV remote control. It’ll increase your chances of reading instead of watching.

20.               It’s okay to have some guilty pleasure apps that don’t offer the same streamlined features as others. Example: I use Hanx Writer from time to time because I love the typewriter sound it makes. It’s not as fully featured as Byword or Scrivener, but that’s okay. If I need to, I’ll copy and paste my text into one of those apps. It’s an extra step, but for that clickety-clackity sound, it’s worth it.

21.               Delegate as much as you can if you can. Think beyond work for this, too. A Roomba can vacuum for you so you can spend more time on something you really enjoy (and perhaps even earn money by doing it).

24.               Even though it may take longer to get to where you’re going, spend time walking or biking places. Productivity is not about speed for speed’s sake.

29.               Even the littlest thing that needs to happen regularly should be on your to do list if it matters. Don’t let it take up bandwidth in your brain.

34.               Leverage the time when doing the dishes or working out by listening to something like an audiobook or a podcast.

These points were originally posted on Medium by Mike Vardy on July 22, 2017