You Miss Me Yet 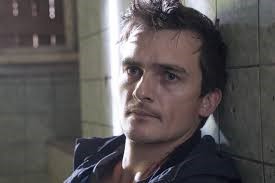 1.Inflation??  Another Trump Election Rally Corrects Itself….Commodities Give Back All Gains Since November.

CRB Commodities Index back to November prices….50 day thru 200day to downside. 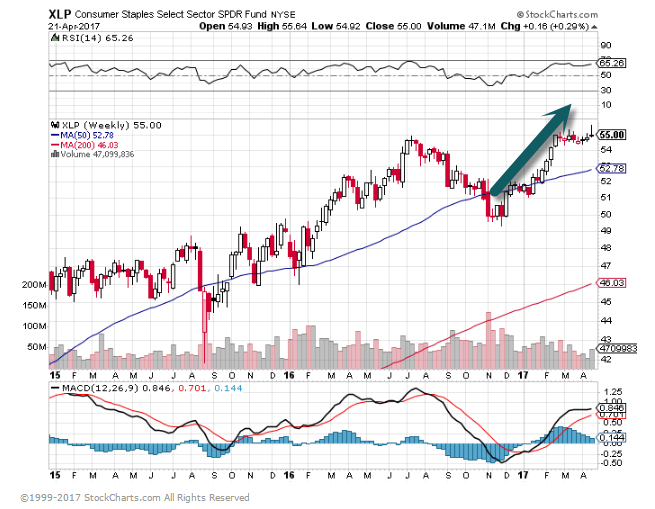 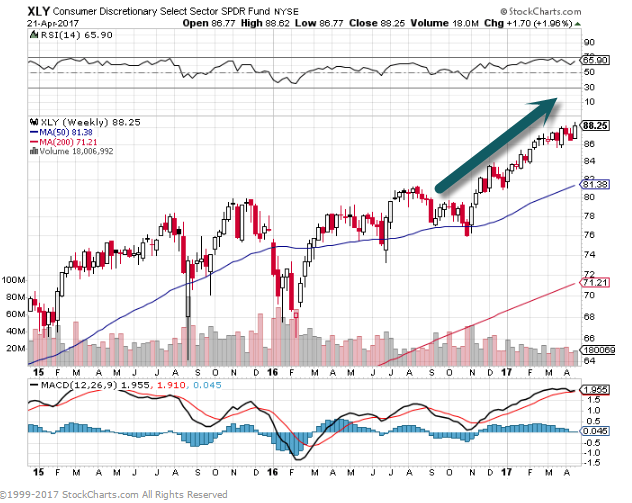 XLE Energy ETF 50day about to cross below 200day. 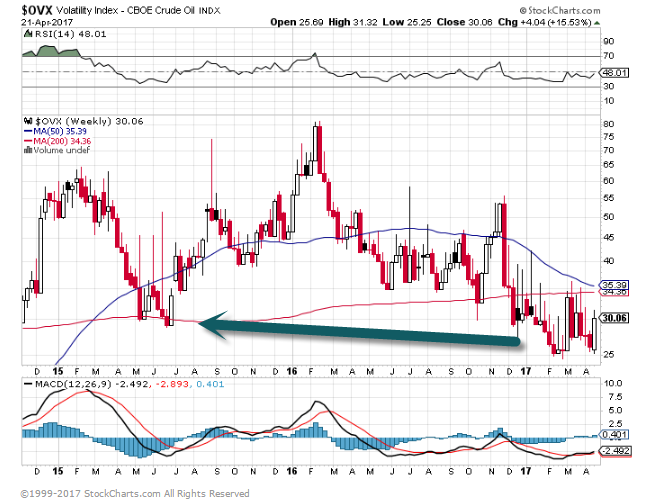 The United States: The current economic recovery remains quite slow relative to other post-WW2 cycles 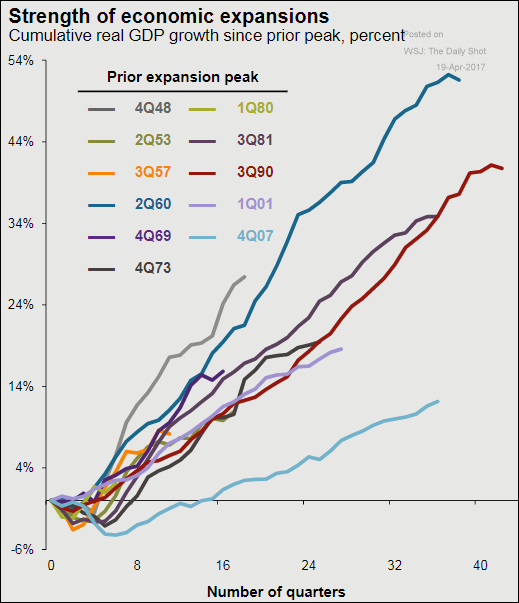 5.How Strong is the Dollar?

Compared with the peaks of the not-too-distant past, the dollar isn’t that strong. According to the chart below of the average monthly values on the DXY—a trade-weighted index of the greenback against other major currencies, including the euro, yen, pound sterling, and Canadian dollar—the U.S. dollar is still 16% below its February 2002 high, and 34.5% under its high of March 1985. 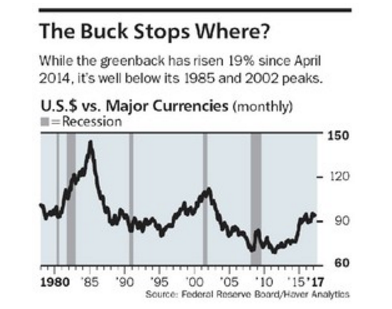 6.Technology Sector Separates from the Pack in Earnings Beat Rates.

We’re now right smack dab in the middle of earnings season, so today we wanted to highlight a couple of interesting sector trends we’ve recently identified.  Thanks to our Interactive Earnings Report Database, we have a list of every single quarterly earnings report for US stocks going back to 2001.  For each report, we know whether the stock beat or missed consensus earnings and revenue estimates and how the stocks performed.

“Many nonfinancial firms do have the balance sheet capacity to expand investment, and reductions in corporate tax burdens could have a positive impact on their cash flow,” the IMF writes. “But reforms could also spur increased financial risk-taking and, in some scenarios, could raise leverage from already-elevated levels.”

Indeed, as you can see below, median corporate leverage among the largest U.S. companies is nearing a record high as measured by debt-to EBITDA (earnings before interest, taxes, depreciation and amortization). 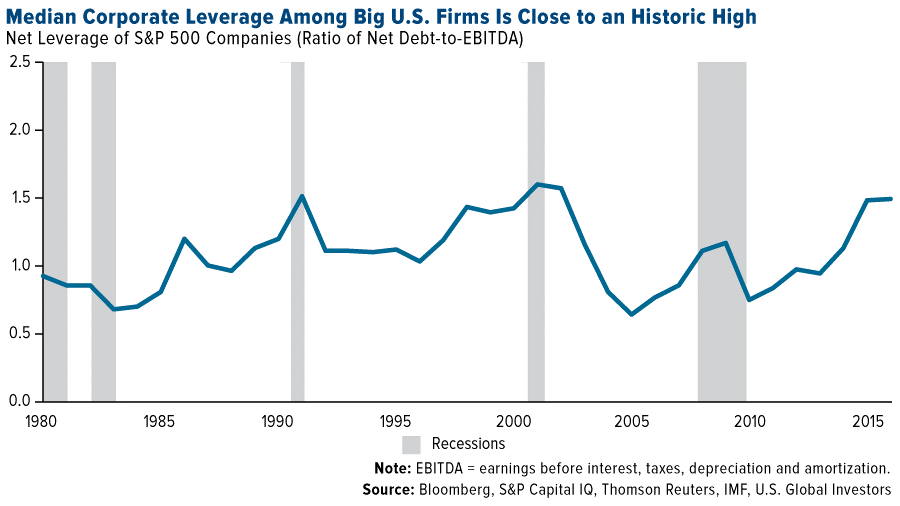 Here is an excerpt from today’s report from the National Association of Realtors.

Lawrence Yun, NAR chief economist, says existing sales roared back in March and were led by hefty gains in the Northeast and Midwest. “The early returns so far this spring buying season look very promising as a rising number of households dipped their toes into the market and were successfully able to close on a home last month,” he said. “Although finding available properties to buy continues to be a strenuous task for many buyers, there was enough of a monthly increase in listings in March for sales to muster a strong gain. Sales will go up as long as inventory does.” [Full Report]

For a longer-term perspective, here is a snapshot of the data series, which comes from the National Association of Realtors. The data since January 1999 was previously available in the St. Louis Fed’s FRED repository and is now only available from January 2013. It can be found here.

Over this time frame, we clearly see the Real Estate Bubble, which peaked in 2005 and then fell dramatically. Sales were volatile for the first year or so following the Great Recession. The latest estimate puts us back to levels reached before the recession.

Over this time frame, we clearly see the Real Estate Bubble, which peaked in 2005 and then fell dramatically. Sales were volatile for the first year or so following the Great Recession. The latest estimate puts us back to levels reached before the recession. 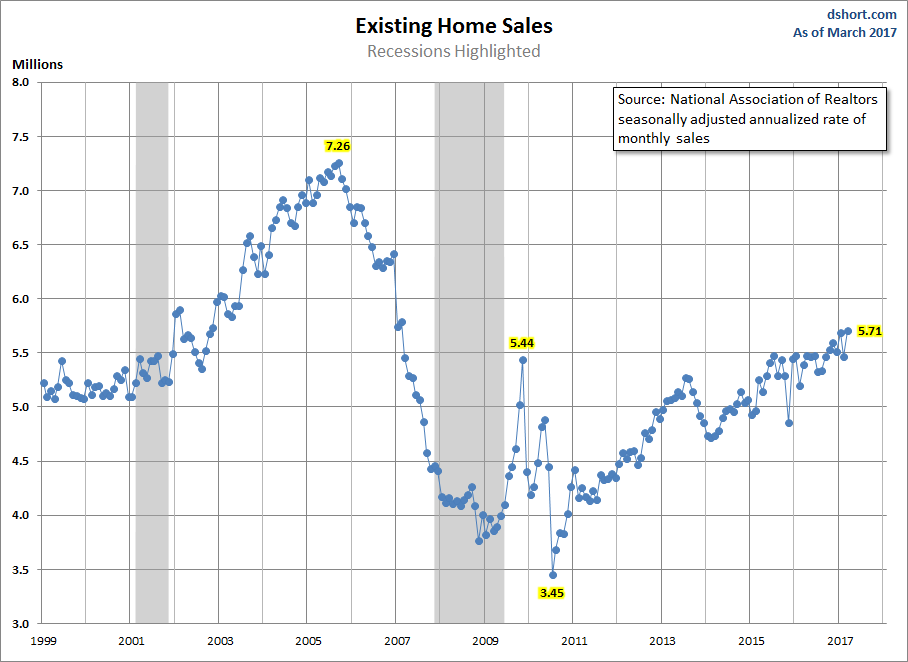 9.The First Day Without Coal in Britain Since the Industrial Revolution. 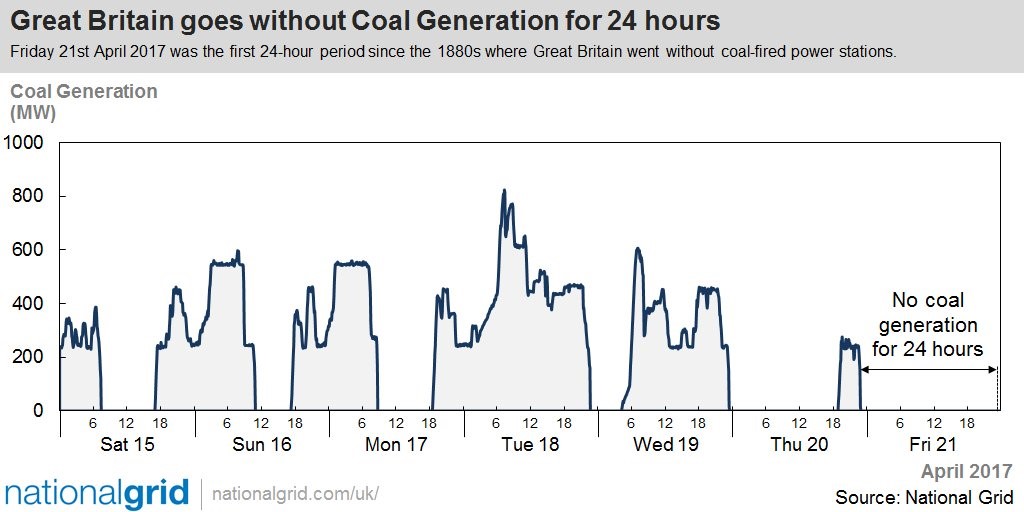 Friday was Britain’s first ever working day without coal power since the Industrial Revolution, according to the National Grid.

The control room tweeted the milestone on Friday. It is the first continuous 24-hour coal-free period for Britain since use of the fossil fuel began. West Burton 1 power station, the only coal-fired plant that had been up and running, went offline on Thursday.

The UK has had shorter coal-free periods in 2016 , as gas and renewables such as wind and solar play an increasing role in the power mix. The longest continuous period until now had been 19 hours – first achieved on a weekend last May, and matched on Thursday.

A National Grid spokesman said the record low was a sign of things to come, with coal-free days becoming increasingly common as the polluting fuel is phased out.

Coal has seen significant declines in recent years, accounting for just 9% of electricity generation in 2016, down from around 23% the year before, as coal plants closed or switched to burning biomass such as wood pellets.

Britain’s last coal power station will be forced to close in 2025, as part of a government plan to phase out the fossil fuel to meet its climate change commitments.

Hannah Martin, head of energy at Greenpeace UK, said: “The first day without coal in Britain since the Industrial Revolution marks a watershed in the energy transition. A decade ago, a day without coal would have been unimaginable, and in 10 years’ time our energy system will have radically transformed again.

“The direction of travel is that both in the UK and globally we are already moving towards a low carbon economy. It is a clear message to any new government that they should prioritise making the UK a world leader in clean, green, technology.”

Gareth Redmond-King, head of climate and energy at WWF, called the first coal-free working day “a significant milestone in our march towards the green economic revolution”.

“Getting rid of coal from our energy mix is exciting and hugely important. But it’s not enough to achieve our international commitments to tackle climate change – we haven’t made anything like the same progress on decarbonising buildings and transport. Whoever forms the next government after the general election, they must prioritise a plan for reducing emissions from all sectors.” Redmond-King said.

Britain became the first country to use coal for electricity when Thomas Edison opened the Holborn Viaduct power station in London in 1882. It was reported in the Observer at the time that “a hundred weight of coal properly used will yield 50 horse power for an hour.” And that each horse power “will supply at least a light equivalent to 150 candles”. 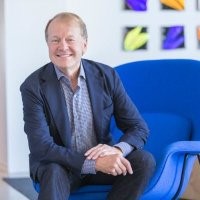 In every person’s career, there are pivotal moments that stand out. These experiences can range from landing your dream internship to being made partner at a firm, and each holds its own set of lessons. However, I’d argue that the setbacks and failures we experience shape us equally as much as our successes. We are defined by our failures, the lessons we choose to learn, and how close we stay to the pulse of change in order to keep up with market transitions. I’d like to share a few are key lessons I’ve learned:

Make your weaknesses your strengths.

I was diagnosed with dyslexia at a young age, and in third and fourth grade, it was so severe that my teachers doubted that I would even go to college. However, with the help of special teachers and mentors, I learned how to think differently, enabling me to not only overcome the challenge of dyslexia, but to turn it into a strength in business. I can jump quickly from A to B to Z, making it easy to see the bigger picture even faster, identify opportunities and problems, and see how business propositions will play out from start to finish.

In part because of my dyslexia, I faced challenges early in my career, like throwing up before speeches and losing my place when reading from scripts. I knew that I needed to take a different approach if I wanted to become an effective communicator and come up with a solution that worked for me like creating a mental outline. By doing this, I was able to develop public speaking into one of my strongest skills. Now I am as comfortable speaking to 10,000 people as I am in a one-on-one conversation. These experiences have truly made me stronger and shaped the leader that I am today.

We are products of our setbacks.

Some of my most challenging moments stand out in my memory as lessons that created the opportunities for growth. For example, after IBM I took a position at Wang Laboratories and worked with the founder, An Wang. It was tough to see a technology icon like Wang close shop in 1992, but they missed the critical shift from mini-computers to PCs and software and never recovered. This experience taught me the importance of creating an environment that looks for inflection points in the industry, not just at what competitors are doing. I realized that in order to lead market transitions, a company must act fast, accept the reality that risk could potentially mean failure, and think like a teenager. This lesson stuck with me throughout my career and was essential to Cisco’s success; catching market transitions and having the courage to change from doing “the right thing too long” to “the next big thing.”

Setbacks have taught me that if you don’t disrupt yourself and your business, you’ll get left behind. The technology industry has no hierarchy and no room for entitlement; the big fish have failed before and new disruptors have risen to not only beat out competitors, but change the direction of the market altogether. Overall, failure and lessons learned are an important part of success and how you win in the future.

A failure that I often recall when discussing market transitions is our acquisition of Flip in 2009. Our mistake was that we fell in love with the product, not the architecture. We were outmaneuvered by Apple, and although it was difficult to accept, we knew that we had to listen to the market and cut the product.

The reason we were able to remain a successful company is that we course correct quickly. While Flip is pointed to as one of our biggest failures in the grand scheme of things, this acquisition wasn’t in the top 20 in terms of cost. Without setbacks like this, while painful but necessary, we wouldn’t have learned to quickly shift strategies and stay close to trends in order to anticipate change.

Insignificant moments have the potential to be big breaks.

In my career, I’ve found moments that seemed at the time to be too small to be pivotal. For example, after receiving my MBA at Indiana University I was ready to hit the ground running in either finance or law and a friend suggested I work in sales at IBM, which didn’t appeal to me. After being enticed with tickets to a basketball game, I agreed to a conversation that shifted my perception of IBM from a geeky, tech company to a business helping customers transform for the next generation. At the time, the decision to join the sales team and my subsequent growth within the company didn’t feel significant, but ended up being what sparked my love for technology and were the “big breaks” that led me to Cisco.

Big breaks can happen when you least expect them, and more frequently they will stem from your setbacks rather than your successes. In today’s environment, if you aren’t being challenged constantly, you won’t survive, making the ability to learn from failures and quickly adapt more important than ever before. Change takes risk, and you have to be willing and ready for when opportunity presents itself.