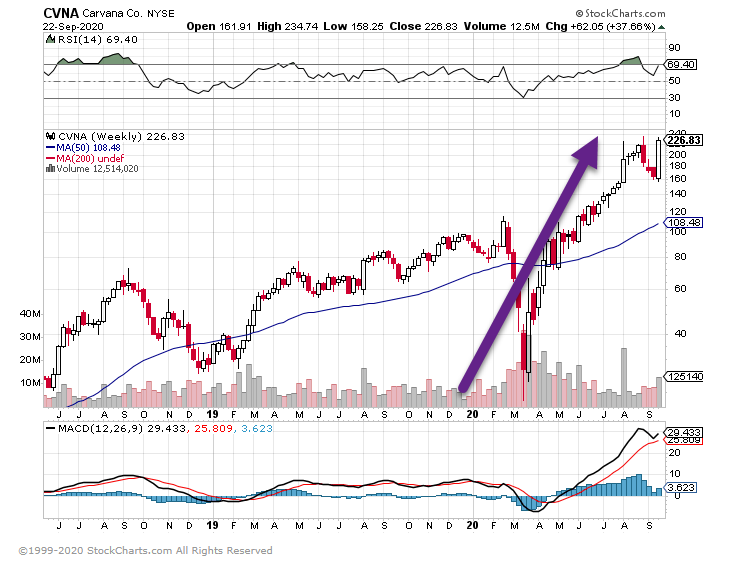 Carvana has been the target of skeptics and short sellers in the past, and its shares have been volatile since it went public. It has rallied more than 670% since a March low and has a $36.2 billion market valuation. Roughly aquarter of the company’s float is sold shortand the short interest ratio — a gauge of how many days it would take for short sellers to cover their positions — was near a record for this year at the end of August, according to data compiled by Bloomberg.

The company said Tuesday it will sell $1 billion of new debt, seizing on the boom in demand for its vehicles and low yields in the corporate bond market. Around $600 million of the proceeds will be used to refinance existing debt, with the rest held as cash on the balance sheet.

— With assistance by Jack Witzig

2. All FED Governors on Board Zero Percent Interest Rates “for some time”

The Fed said that it “expects it will be appropriate” to keep short-term interest rates near zero until three conditions are met: The job market has fully healed, inflation has returned to the target rate, and inflation “is on track to moderately exceed” the target rate “for some time.”

4. At $5 Trillion, the ETF Market Is Showing Signs of Saturation

At $5 Trillion, the ETF Market Is Showing Signs of Saturation

(Bloomberg) — America’s exchange-traded funds are shutting down at a record pace and the production line is stuttering as issuers struggle to sell new products in the $5 trillion market.

More than 130 ETFs have been liquidated in 2020, already the most ever, while 178 funds have started trading — roughly on course to match last year’s launches. That was the lowest number of debuts since 2014 and the second drop in a row.

A glance at flows helps explain why: Almost a third of all existing ETFs were launched within the past three years, yet they account for only about $2 of every $100 currently invested in the industry, according to data compiled by Bloomberg Intelligence.

“It’s way tougher” to create a successful product now, said Athanasios Psarofagis, a Bloomberg Intelligence analyst. “Getting $1 billion today in real assets is really, really hard. It’s like getting $6 billion in the past when there was less product, and less of an issue to get on the platforms.”

While the industry as a whole has enjoyed solid growth in the last few years and total assets recently hit a record, giants such as BlackRock Inc. and Vanguard Group dominate the scene. Their size and influence gives them huge advantages in terms of distribution and marketing. They also benefitted from economies of scale when a heated fee war broke out.

Funds from the biggest three issuers account for more than 80% of all ETF assets, and roughly 70% is in products launched more than a decade ago, the data show. The top 10 funds by size were all launched before 2013 and hold a combined $1.3 trillion.

“In the ETF space, distribution is king,” said Nate Geraci, president of investment-advisory firm the ETF Store. “You can have the best ETF in the world, but if investors aren’t aware it exists, it doesn’t matter.”

Even the much-hyped arrival of actively managed, non-transparent ETFs — which reveal holdings just once a quarter, similar to mutual funds — have failed to attract big flows. The 15 funds that have launched so far have drawn in just $546 million worth of assets.

Of course, there are some success stories. The Roundhill Sports Betting & iGaming ETF has grown to roughly $129 million after launching in June, while the Direxion Work From Home ETF has also crossed the $100 million milestone after its June debut. And so-called buffer funds — which shield against losses in exchange for a cap on gains — have steadily accumulated assets amid this year’s turbulent markets.

Still, for every winner there is likely to be at least 10 failures, according to Psarofagis, who says this puts the onus on issuers to ramp up their sales and distribution efforts.

Distribution muscle has helped firms such as JPMorgan Asset Management quickly establish themselves. Though the company didn’t launch its first fund until 2014, the JPMorgan Ultra-Short Income ETF became the largest actively managed ETF earlier this month.

“Firms with distribution clout have been able to make inroads despite being late to arrive,” said Ben Johnson, Morningstar’s global director of ETF research. “Schwab, Fidelity, Goldman and JPMorgan are great examples of firms that have come late to the game with me-too offerings but have sold those in to their own captive channels and affiliates.”

For more articles like this, please visit us at bloomberg.com

Subscribe now to stay ahead with the most trusted business news source.

5. How Bonds May Perform When Rates and Stocks Fall

A few weeks ago we looked at how different bond sectors performed during rising rate periods during the last economic cycle (2009–2020). Today we look at falling rate periods—not the outcome we expect, but it can still be helpful to understand how investments respond to different environments.

As shown in the LPL Chart of the Day, there are really two stories to tell: During broad falling-rate periods (the top half of the chart), declining rates supported a wide range of bond sectors, although, not surprisingly, the most interest rate-sensitive sectors tended to lead. But when rates fell during periods of stock market uncertainty (the bottom half of the chart), it was often a time when the diversification benefits of Treasuries stood out.

The price of Lumber is down 48% from its high in late August, now flat on the year.$LUMBER

Chinese Communist Party Secretary Xi Jinping announced last week that the party must strengthen its leadership over private companies, and that entrepreneurs must meet the party’s needs.

Why it matters: Xi’s new announcement will increase fears that Chinese businesses may serve as a Trojan horse for the CCP.

What’s happening: On Sept. 15, the CCP’s top decision-making body, the Central Committee, released a memo calling for closer ties between private Chinese businesses and the United Front Work Department, which is the CCP’s bureau in charge of extending its influence and control to all corners of society.

Between the lines: Under Xi, the party is seeking to establish control over the private sector in a way that maintains robust economic growth while allowing the government to implement long-term strategy and commandeer private sector resources when needed.

The big picture: U.S. concerns over TikTok are based in part on the suspicion that private Chinese businesses aren’t able to fend off Chinese government demands for data or other assistance.

A promotional video for the new channel, which will be free, said short-selling needs to be explained in detail so that investors can understand the issues and make decisions about how to protect themselves.

“This is the information that nobody else in the marketplace has any incentive to give you, except for activist short sellers,” Block said on the video.

Short sellers such as Block do extensive research on companies they think are over-valued or have engaged in fraudulent practices. The strategy entails borrowing stock to sell, then buying it back later at a lower price for a profit.

RealVision.com, a website dedicated to investing through the use of video, will be the production arm for Zer0es TV, which will have both live and pre-recorded content, said Stefan Prelog, a spokesman for Zer0es TV.

“This video channel is the go-to place for anything to do with short-selling,” a blurb on a RealVision web page says. “Nothing is off limits and nothing is watered down.”