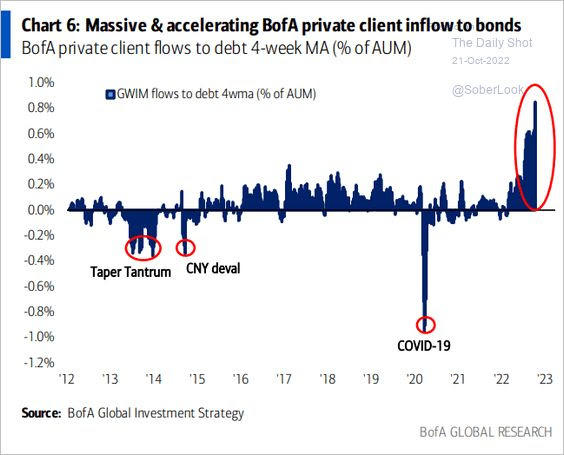 Callum Thomas Chart Storm More on Cash: Retail, upon witnessing both stocks and bonds melting down, (where possible) have piled into cash funds — where the nominal return is positive, and real return is still beating most other assets…

(n.b. as a guess, the insto draws probably = rebalancing + redemptions) 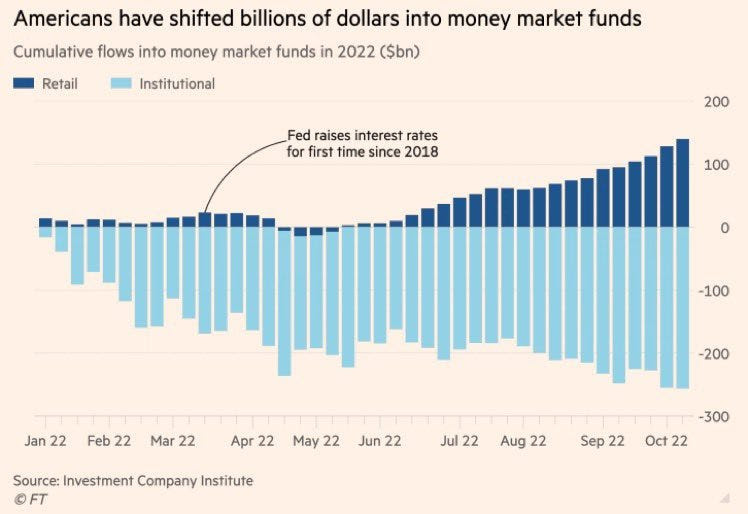 “While anything seems possible these days, especially scary scenarios, we would like to point out that even as the Fed is withdrawing liquidity” by raising the fed funds rate and continuing quantitative tightening, the U.S. is a safe haven amid challenging times globally, the firm said. In other words, the notion that “there is no alternative country” in which to invest other than the U.S., may provide liquidity to the domestic bond market, according to its note. 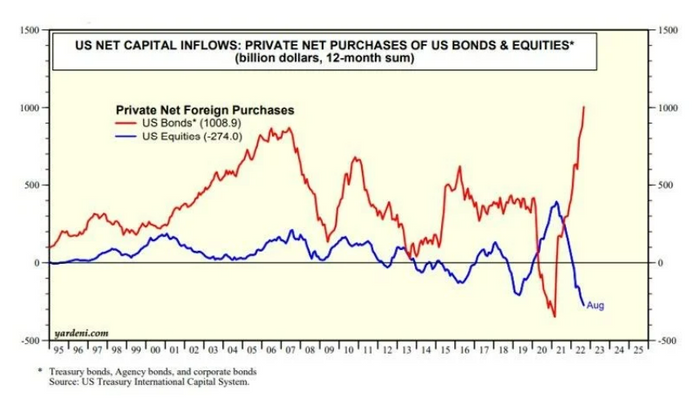 4. The Cost to Hedge with Options Falls Back to Mean

Bloomberg Elena Popina Judging by the ominous pronouncements from Wall Street luminaries, every trader under the sun should be prepping for fresh turmoil in the world’s biggest stock market.

Yet hedging for doom and gloom is falling out of fashion fast, thanks to a historic equity rout that’s already erased $13 trillion in market value this year and flushed out both retail and institutional investors.

In the options marketplace, the relative cost of contracts that pay off if the S&P 500 Index sinks another 10% has collapsed to the lowest since 2017. Appetite for bullish wagers is on the rise. And the popular Cboe Volatility Index is sitting far below multi-year highs even as equity benchmarks plumb bear-market lows. 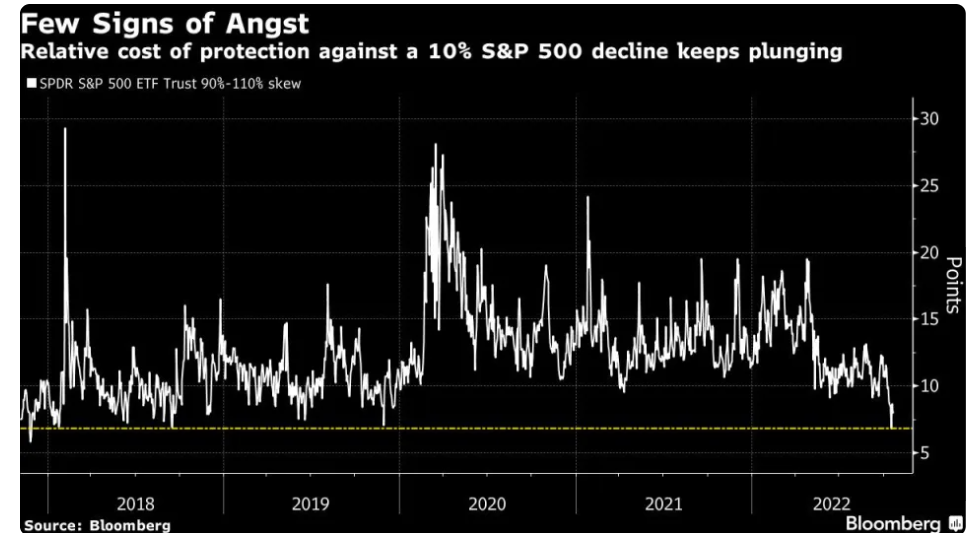 JP Morgan Stocks seem to be reflecting the most economic damage. The S&P 500’s year-to-date decline (-23%) represents roughly 85% of the median historical drawdown that coincided with a recession. Thanks to the exorbitant rise in yields and ~70bps in IG spread widening this year (credit spreads are ~185bps today), high quality bonds are also reflecting 76% of the pain of what you would expect to see in your typical recession—just another data point to add to the opportunity now for core bonds. High yield spreads, meanwhile, have remained relatively sanguine. From here, we expect high yield credit spreads to widen a bit further. 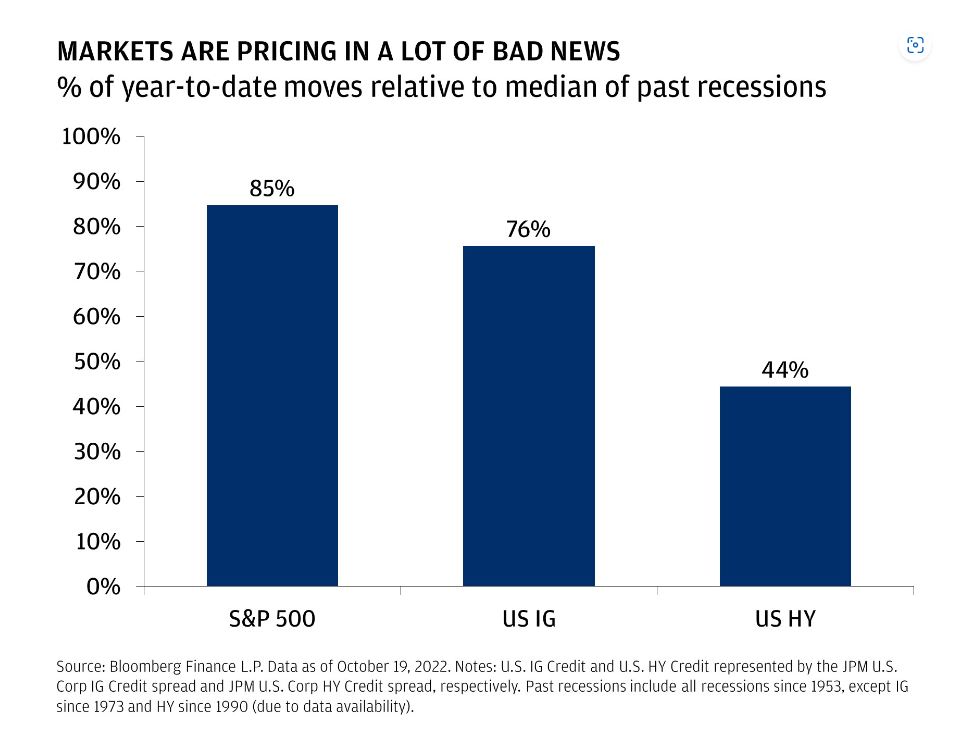 Market metrics: Where are we going from here | J.P. Morgan Private Bank (jpmorgan.com) 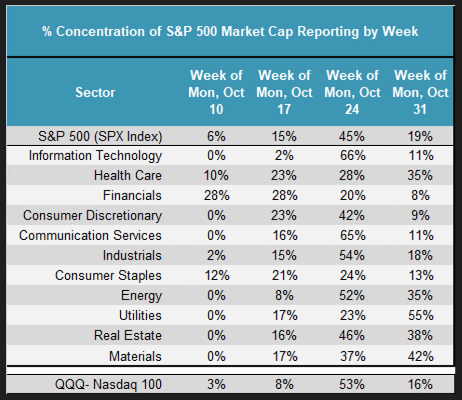 7. Some Russians drafted to fight in Ukraine say nobody is in charge and they don’t know what they’re doing there: report

Russian soldiers drafted to fight in Ukraine say they have no ammo, no commanders, and don’t know what they are doing on the battlefield.

The claim came from a six recently-drafted men in a video circulated on Telegram, which featured in a report by the independent Russian outlet The Insider.

(The Insider is a Russian news outlet and has no affiliation with Insider.)

In the footage complained directly to the Russian Ministry of Defense about their lack of direction and equipment.

The group, per the report, said they were from Russia’s Krasnodar region and had been called up towards the beginning of the mobilization announced by Russian President Vladimir Putin on September 21.

After training, the men said, “it turns out that we’re somewhere in the fields of Ukraine and they just threw us out into the field like dogs,” according to The Insider.

They also said they were only equipped with uniforms and were given some AK-47s and bayonets – but no ammunition.

“There is no information, no command, we’re on pins and needles, as we don’t know where our people are and where [the enemy] is,” one man said in the video, The Insider reported.

“No radio, no ammo, not a fucking thing. No medical supplies either,” he added. “I’d like to show this to our authorities … Do you consider this normal?”

Insider was unable to independently verify the video.

The report comes more than a month after Russian President Vladimir Putin announced a partial mobilization of his country’s military reservists.

It tallies with other reports pointing to poor training and equipment issues among mobilized Russians.

Marina Miron, an honorary research fellow at the Centre for Military Ethics at King’s College London, told Insider’s Sinead Baker last week it was likely that “some of those mobilized have been sent to Ukraine without any guidance or training whatsoever.”

Last week, Putin said that around 16,000 mobilized men had already made it into combat in Ukraine. Many experts have concluded the men are effectively being used as cannon fodder.

Lack of equipment is also an issue in the Russian military, with one draftee telling The Guardian last week that he was made to buy his own gear.

“They gave us absolutely no equipment. The army has nothing,” the draftee told The Guardian.

8. U.S. Providing Most of Aid to Ukraine 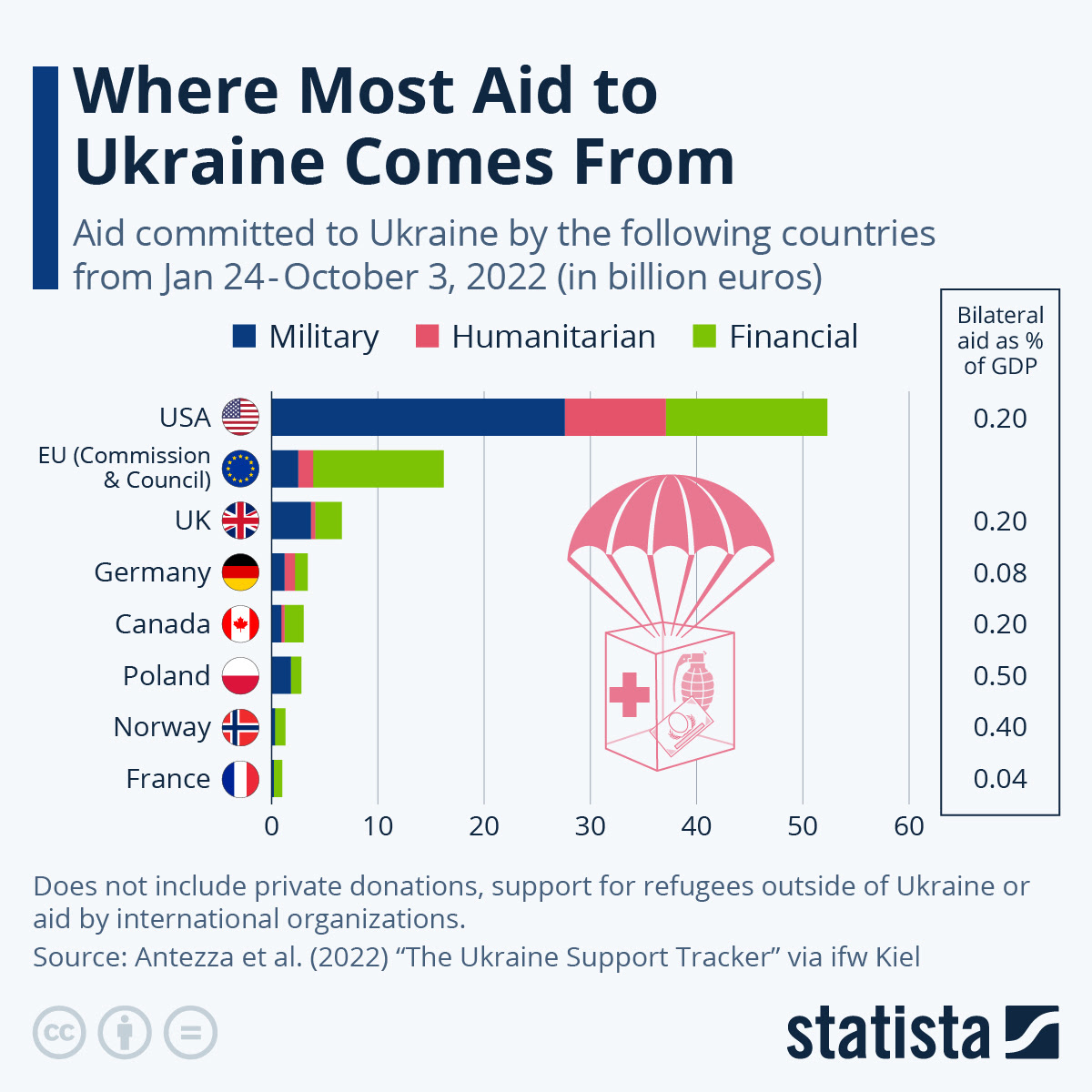 China has one of the biggest aging problems in the world.

High parenting costs and lack of access to public services such as childcare and education have disincentivized couples from having children. China’s zero-COVID policy has also played its part, limiting social opportunities and adding to financial and employment insecurities. 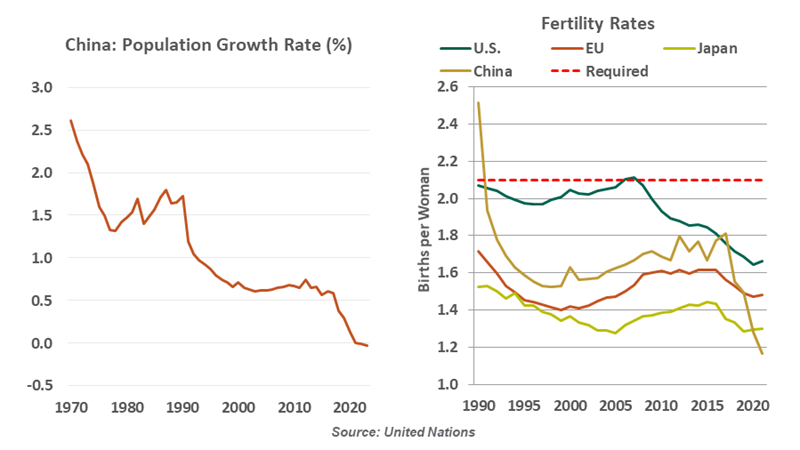 10. The 6 Essential Traits of Good Character, According to Jim Rohn

The following are what I believe to be the basics of good character. Miss one of these, and you’ll find a weak link in your character—one that might be your leadership’s undoing.

Integrity is a good catchword that is similar to character but provides us with a different way of looking at the ideas of character. The root of integrity means “whole” or “undivided,” and that’s a terrific way to help us understand what integrity is—an undivided life. For example, you don’t act one way in one situation and another in a different situation. Living this way will build trust in your followers.

Another use of the word integrity that provides insight for us is when the word is used in regard to a physical structure. A wall or a building that is strong and has no cracks is said to have integrity. The same could be said for great leaders.

It is regularly said that honesty is the best policy, but I would add that honesty is the only policy for great leaders. Think about it. Why do people hedge the truth? Usually for a few basic reasons: They are either afraid of the ramifications or they are trying to hide something. Either way, a lack of honesty results in the destruction of the trust of those who follow you. Even if you tell them the truth, knowing you have lied to others will destroy the trust they had in you. They will find themselves thinking, If he will lie to them, will he lie to me?

I’ve never understood what people hope to accomplish by being dishonest. Eventually people come to know that you’re not honest in your dealings, and that is what you become known for. Your reputation is what your leadership is based on. When we’re honest and live transparently before our followers, they’re able to see us for who we are and make the decision to follow us.

People of good character are loyal. They have a “stick-to-it” attitude when it comes to others. Anybody who knows human nature knows that people fail. It’s just a matter of time, no matter how talented someone is. A person of good character stays with their friends even in the down times. Anyone can be friends with others when times are good, but people of good character stay with their friends when they need them most. How this translates into making you a good leader is this: People want to follow a leader who will stretch them beyond where they are now, but who’ll also allow them to try—and to fail. When we are loyal to our followers, they’ll be loyal to us and make every effort to succeed on our behalf and on behalf of the organization. There are few things that strengthen the leader-follower bond more than when a leader shows loyalty to a follower in needReport Ad

Lee Iacocca became a legend when he said he’d bring Chrysler back from the brink of bankruptcy and would take only a dollar a year in pay. This was a classic example of a leader sacrificing for their followers. It also showed his understanding of and empathy with the average line worker. As a result, the workers of Chrysler rewarded him with an incredible following as they built Chrysler into one of the world’s leading car companies.

What is it about self-sacrifice that breeds followers? Followers don’t mind putting in the hard work. They don’t even mind a leader making more money or reaping benefits from their work. What followers do mind, though, is when the leader is using them for personal gain. People of good character don’t use other people, period. So when a leader shows sacrifice of personal gain, it says to the followers that they are willing to come alongside them—and followers reward that almost universally. A person of good character shows that they can give up personal gain for the good of the whole.

People of good character don’t mind accountability; that is, the act of allowing others to have a say in your life, to speak to you straight about your life and conduct. In fact, they welcome it. The brutal truth is that we have blind spots and need other people to be close to us so we can advance down the road of success. The need for accountability doesn’t prove lack of character. Rather, it proves the presence of character. The person of good character knows this and invites others to speak into their life.

Followers grow tired of leaders who will have nothing to do with accountability. They don’t mind leaders who make mistakes, but they do mind leaders who don’t take responsibility for their mistakes by being accountable. When we allow ourselves to be held accountable, our followers know that we are serious about keeping our own house in order, and thus will do a good job in leading the rest of the organization.

The ability to make decisions—good decisions—about what we will and will not do with our actions is at the core of what we become in regard to our character. There will be plenty of options to participate in things that are not moral. Everybody has temptations, but a person of good character knows to exercise self-control over their choices. When people don’t exercise self-control, they sabotage their ability to lead. People lose respect for them and will follow less, if at all. Self-control is the ability to choose to do the things we should, and to refrain from doing the things we shouldn’t. When we exhibit self-control, we again build trust in our followers. They respect us and want to follow us.

Adapted from the Jim Rohn Guide to Leadership

This article was published in October 2016 and has been updated. Photo by Fernanda_Reyes/Shutterstock