From Dave Lutz at Jones Trading Sully at CNBC notes it Wasn’t just in the 80s: an oil profits tax was also floated in 2006 by senators upset with prices.   It went away.  Tax Foundation notes how much DC makes off oil taxes (this is from 2006, when idea was floated) 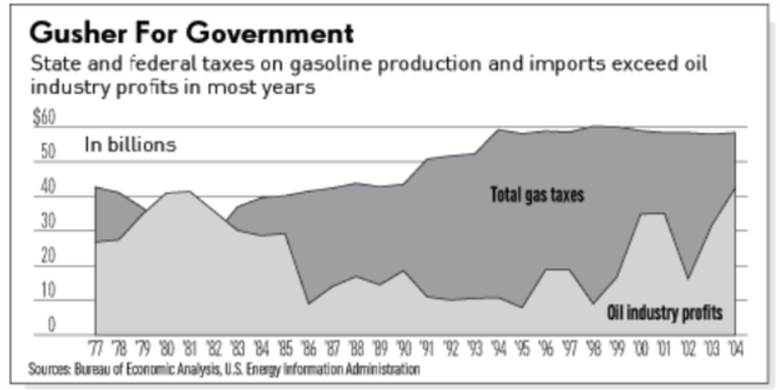 Dorsey Wright On a total return basis, October 2022 was the 8th best performing October going back to 1928 with a gain of 8.10% TR.SPXX. It leaves a level of excitement when investors see a positive return and know that the seasonally strong period for the market is just around the corner. But if this sounds like deja vu, you wouldn’t be alone – as 2021 had a similar positive October. Outside of that, not too many similarities can be drawn from 2021 to 2022. Additionally, market performance during the month of October has historically been like the off-and-on girlfriend; when it’s good, it’s good; when it’s bad, it’s bad. November on the other hand doesn’t quite illicit as many mixed feelings because historically the month is among the better months in the year, both when looking at median and average returns. Going back to the beginning of 1928 (the days of the S&P 90), November has registered a median return of 1.74%, which improves to roughly 2.25% when looking at performance since the debut of the S&P 500 debuted in 1957 – making it the best performing month of the year. 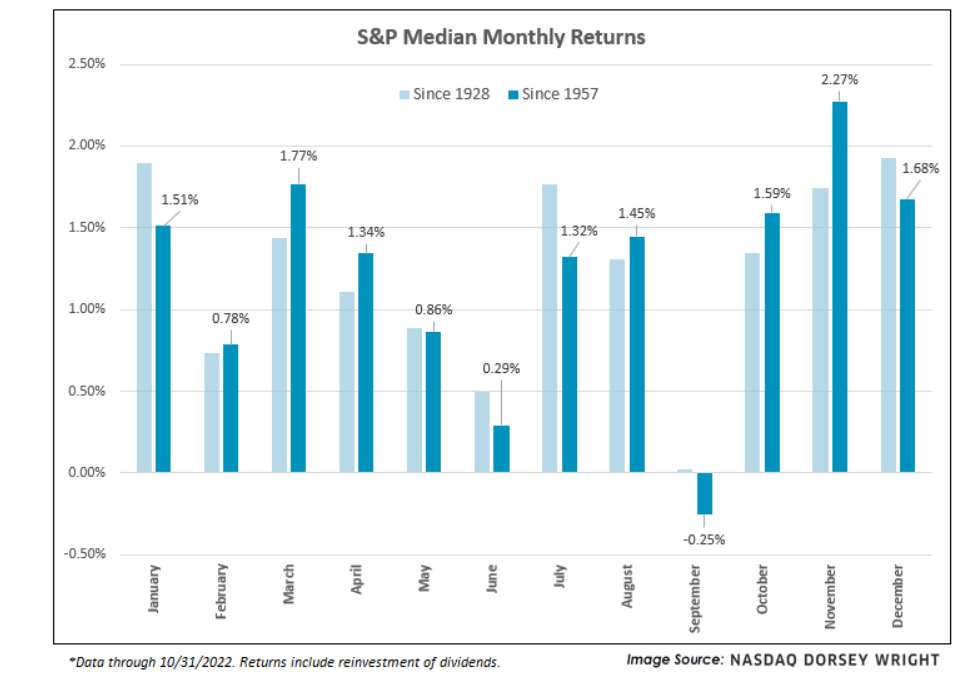 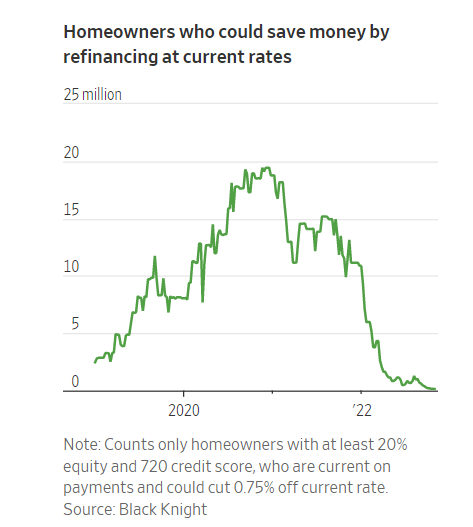 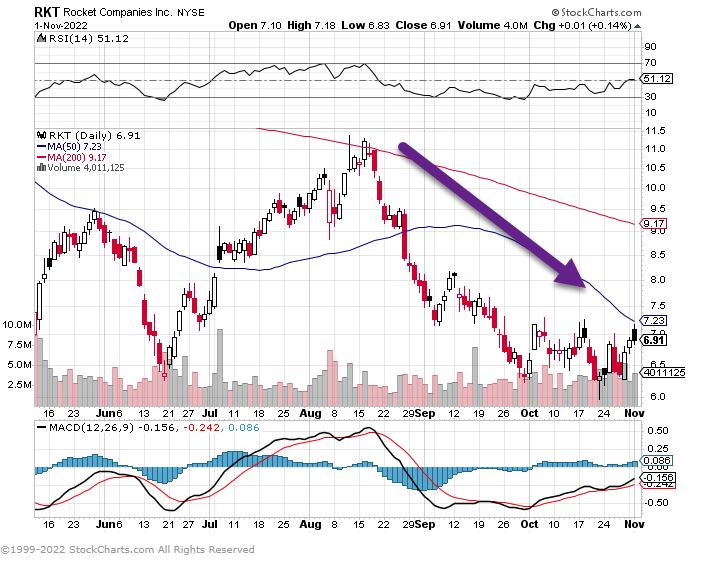 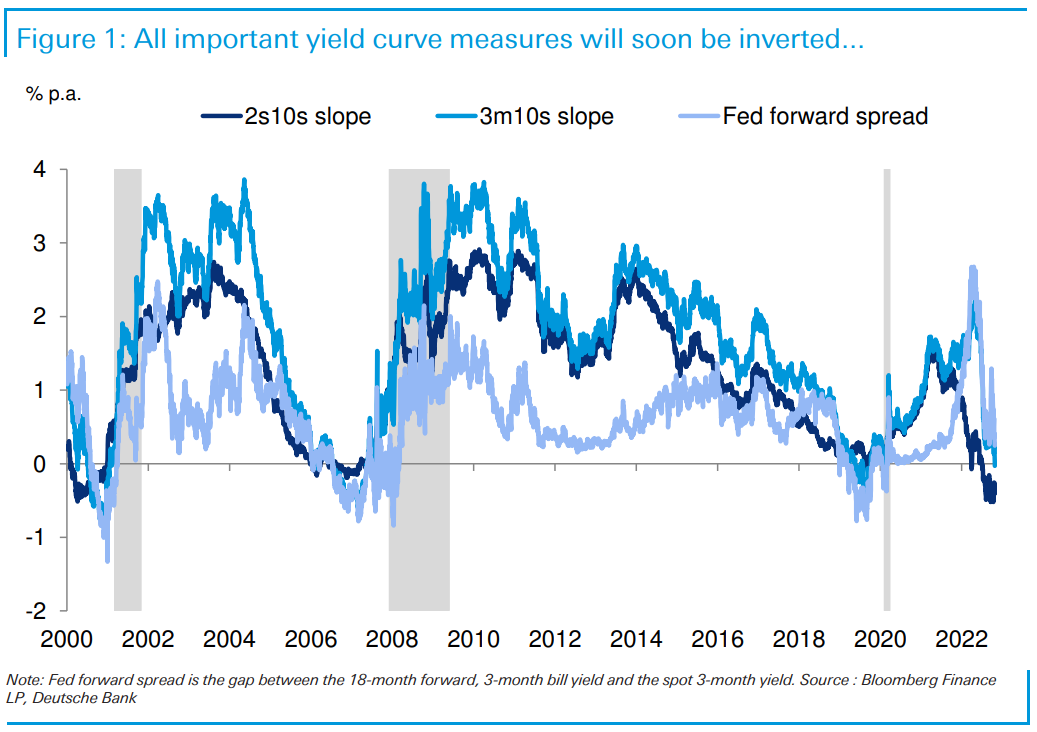 Regular readers will know I’m the biggest card carrying, paid-up member of the US yield curve fan club in so far as it predicts US economic cycles. The yield curve divides opinion as a common refrain in recent years is that the back-end has become so distorted (e.g. QE or saving glut) that a YC inversion doesn’t signal a recession but instead financial repression or demand > supply, and should thus be heavily discounted.

However, I’ve kept my strong faith in the YC as I think the reason it works is through influencing behaviour and animal spirits. I therefore care less about why it inverts, simply that it does.

If I offered you say 4.5% on 2yr treasuries, or gave you the option of taking duration risk at around a 4% yield at the long end (plus maybe a spread), or a 1.72% dividend on the S&P 500, the front end is surely very competitive. You can extend this analysis to decision-making throughout the economy. So, in my opinion, animal spirits slowly drain as the YC flattens and arguably get even more intense as it inverts.

When the 2s10s inverted back in March, another reason for the “this time is different” argument was that yield curve measures that used 3-month money, including the Fed’s preferred forward spread (the gap between the 18-month forward, 3-month yield and the spot 3-month yield) were at historically steep levels and showed no signs of alarm. However, the problem was that with the Fed way behind the curve, these measures were always going to flatten aggressively in 2022. In addition these measures have a much shorter lead time to recession than 2s10s. So plenty of time to catch up.

Last week the 3m-10yr spread inverted for the first time this cycle and the forward spread is not far behind. So with the Fed about to tighten again tonight and then continue for at least a few more meetings, all three measures are soon likely to invert.

See Matt Luzzetti’s updated piece last week here for what this all implies for the latest recession models. All of the yield curve measures support the view of a US recession by mid next year. Also see our chart book from March entitled “The yield curve inverts. What happens next?” 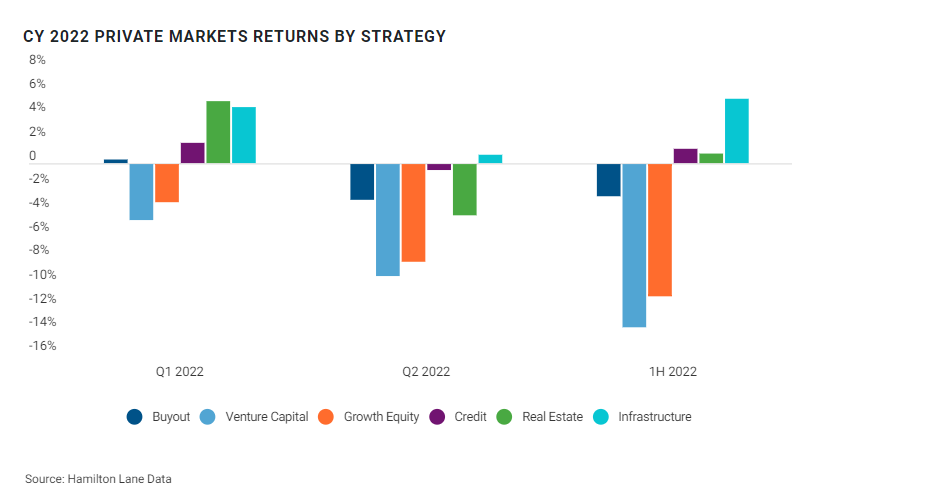 What’s It Worth? | Hamilton Lane

8. Back of Napkin Math on Twitter’s New Model

Chartr.com
The blue tick biz-Pulling a number of trusted Tesla employees over to help, as well as advisors from other tech circles, Musk now appears to be pursuing a “freemium” model for Twitter. On Tuesday he tweeted “Power to the people! Blue for $8/month“, confirming that a subscription model, in which users could pay $8-a-month for a “verified blue tick”, is in the offing — with employees given a very tight deadline to launch the new feature or else be fired.

As details emerge on what the new Twitter will look like, we thought we’d explore what it might mean for the business. Some napkin math suggests that Twitter would struggle to run if only reliant on paid users, especially if the company uses some of the revenue to reward content creators, as Musk has suggested.

If every single currently-verified user signed up to pay, but no others, that would be worth a paltry $40m a year to Twitter. If the company successfully convinced 10% of their 229m active users to pay the proposed $8-a-month charge, they’d generate ~$2bn in revenue — a much more substantial sum, but still less than half of the $4.5bn they made in ad revenue last year. Even in a leaner version of Twitter, it’s hard to see a future without ads. 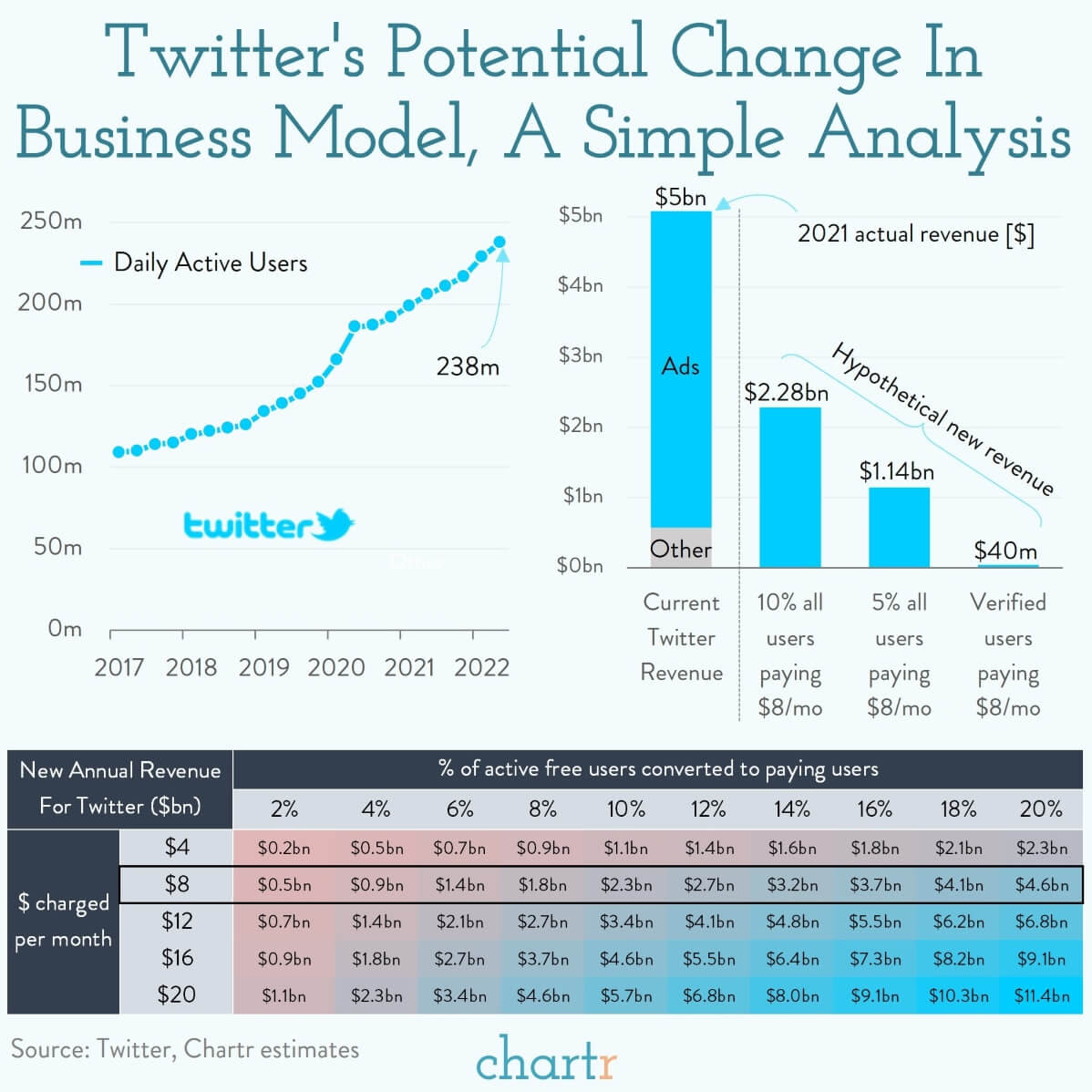 9. Massive Surge in Home Improvement Spending….Homeowners Locked in Below 4% and they are not Moving. 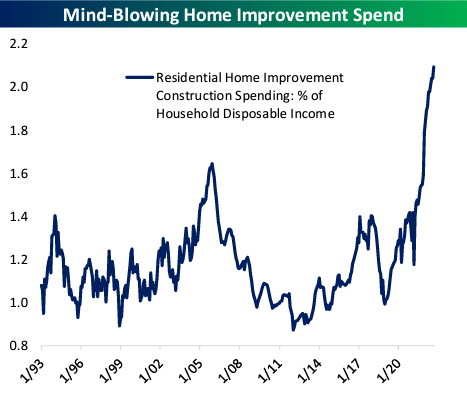 10. 6 Pathways to Receptivity That Can Help You Learn and Grow

Receptivity — or open-mindedness — requires more cognitive effort than dogmatism. Receptivity asks you to welcome uncertainty and information you may not align with, which isn’t always easy.

Our brains generally crave certainty and routine. Certainty rewards the brain with a feeling of “everything is in order and, therefore, OK.” By contrast, the more ambiguity or uncertainty, the more the brain’s amygdala — the neural system for processing fearful and threatening stimuli — lights up. Although that may sound like something to avoid, being open to it is an opportunity.

Personal growth happens in the space of curiosity and openness. Compassion for yourself and others ignites, and judgment, hatred, and ignorance extinguish. As you begin to discover more about yourself and the world around you, life becomes less restrictive, more enjoyable, and filled with adventure.

The following pathways can help you begin your journey to becoming more receptive.

Researchers have found that humans spend around 47 percent of their waking hours not fully paying attention to what’s happening right in front of them. Oftentimes, the reason you lose focus is because you’re looking to escape some kind of discomfort, such as anxiety or boredom. But sometimes the very thing you want to escape is the uncomfortable thing you need to embrace in order to grow.

Remove whatever is distracting you so you can fully focus on whatever you’re working on in your personal growth journey. For example, if you’re reading this article on your laptop, close all other tabs and put your phone on silent for the next few minutes.

Zen master and author, Leo Babauta, describes training in uncertainty as “pushing into discomfort when you want to run to comfort.” It can be larger, such as visiting a country that feels unfamiliar and experiencing new customs. Or it can be something smaller, like introducing yourself to someone new at a party even if you’re feeling shy. The practice is to observe the urge to avoid something and then choose to do it anyway.

When it comes to walking into unfamiliar territories, what often holds you back is the fear of failure or something bad happening. But what if it turns out great? Trying new things helps you vanquish fears and allows you to expand your mind, creativity, and experiences.

Confirmation bias is the tendency to search for, interpret, favor, and remember information in a way that confirms or supports your beliefs or values. Swiss author Rolf Dobelli, who wrote “The Art of Thinking Clearly,” describes confirmation bias as the mother of all misconceptions because it can make you less likely to engage with information that challenges your views. An example of this is a study of 376 million Facebook users that found that many of the subjects preferred to get their news from a small number of sources they already agreed with. This is problematic because it can lead to people forming inaccurate and biased impressions of others, which could then lead to miscommunication and/or conflict.

One way to combat confirmation bias is to actively seek out credible opposing views. This could mean regularly reading a credible news source you don’t usually read or attending a webinar led by a speaker who shares different views than you. Exploring different points of view may not change your views, but the exposure to differing views could at minimum help you learn more about why those opposing views exist.

In open awareness meditation, instead of concentrating on something, your attention is open and remains aware of everything that is happening without judgment toward yourself. Some things that you may focus on during this type of meditation are thoughts, feelings, memories, sounds, smells, and bodily sensations.

Open awareness meditation can be especially beneficial for creating pathways to receptivity, as it slowly excavates limiting beliefs and makes space for those that help you move forward and experience new things.

Meditation is among the well-known grounding techniques, which are methods to calm the mind and come back to the present moment. A calm mind is an open mind.

If you’re in an environment — a crowded corporate office or a busy grocery store — where meditation feels less accessible, there are a handful of other grounding techniques you can try such as breath counting or counting objects in the room. For the latter, choose a category of objects and count every object in one category before moving on to the next. For example, start with windows, then move on to doors, then pieces of furniture, then pictures, and so on.

Other alternative grounding techniques include spelling the weather and savoring a scent, which you can read more about in this article here.

Research suggests that being in nature comes with many physical and mental benefits. A series of experiments studied the potential impact of nature on people’s willingness to be open, generous, and trusting toward others. After being exposed to more beautiful nature scenes, researchers found that the effects of nature corresponded to increases in positive emotion. In another experiment, participants were assigned to walk in a forest or urban city center. Results showed that those who walked in forests had significantly lower heart rates and less anxiety than those who walked in urban settings.

It’s much easier to be receptive, learn, and grow when you feel healthy and calm. There are many pathways to get there, be it through nature, meditation, or any of the other aforementioned avenues. Whichever you choose, enjoy the journey.

Develop deep awareness by exploring the five layers of being in Understanding You, a five-part program with Jasmine Hemsley, available now in the Chopra App.