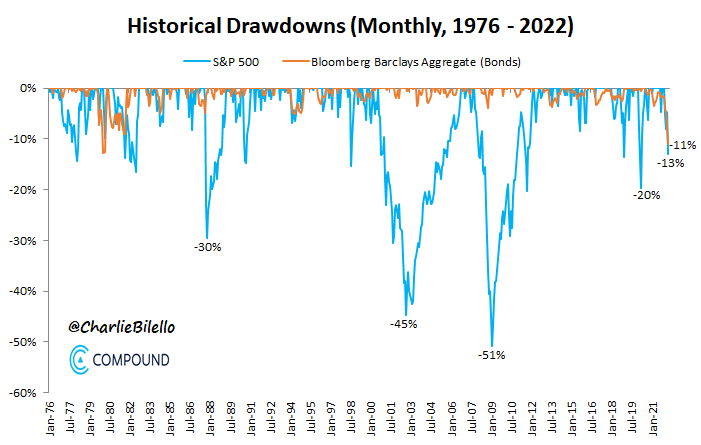 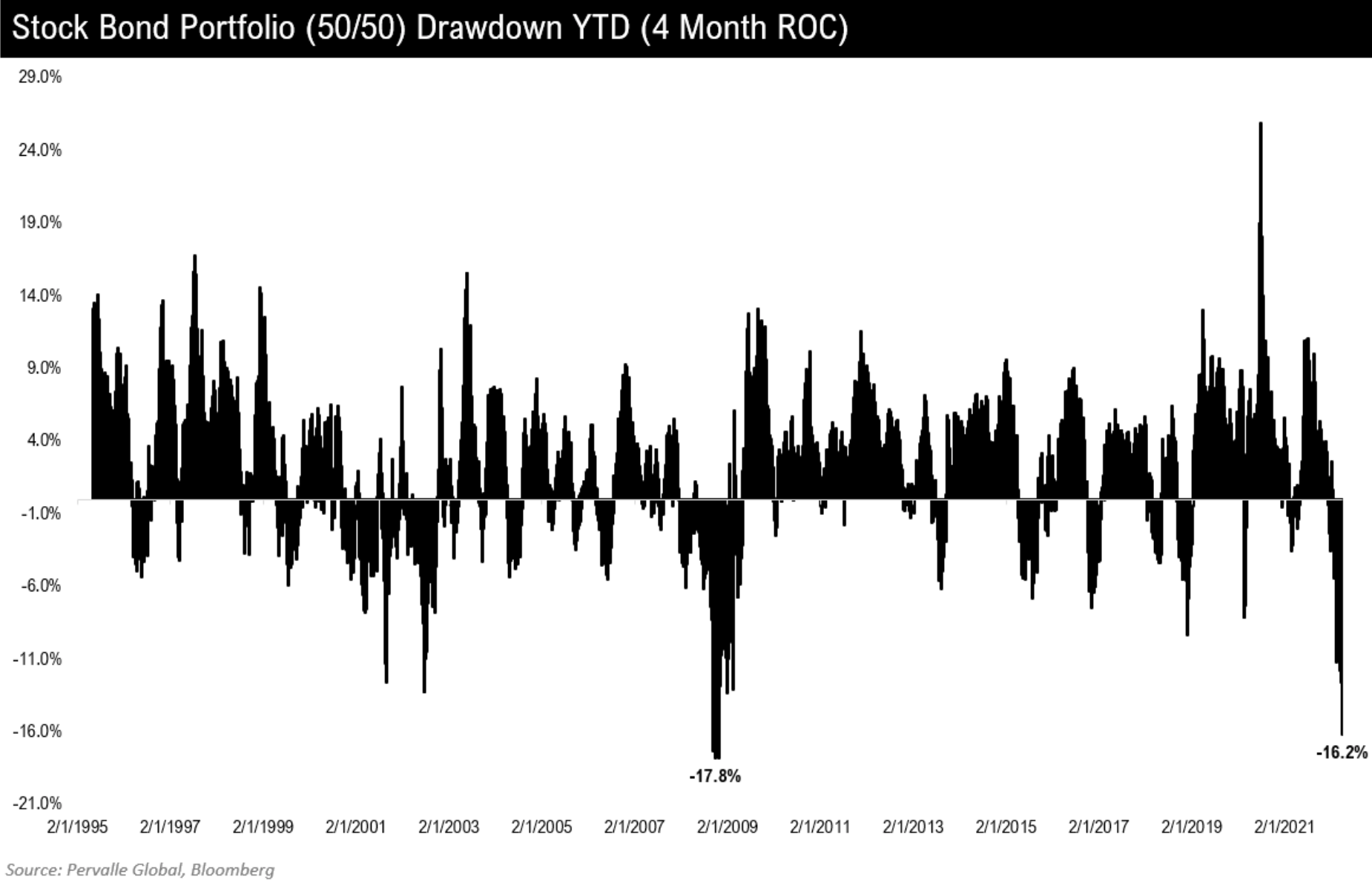 Since The beginning of 2010, the DWA 60/40 Bond Index (DWA.TR) has underperformed the total return of the S&P 500 (TR.SPXX by more than 120% or 4% per year on an annualized basis (through 4/28). However, from the beginning of 2000, there’s a much smaller spread – with the S&P leading the 60/40 portfolio by a little under 60 basis points on an annualized basis – the point being that the picture can change a lot depending on the time periods. www,dorseywright.com 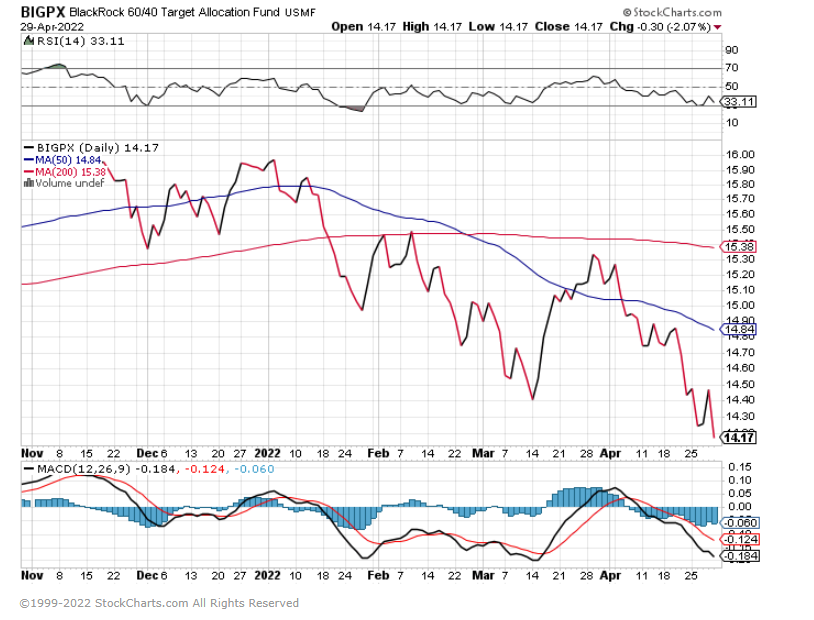 Money Market Inflows Logged a massive +$60B inflows last week, which was the largest weekly inflow since Covid 2020 (and typically another fear gauge). 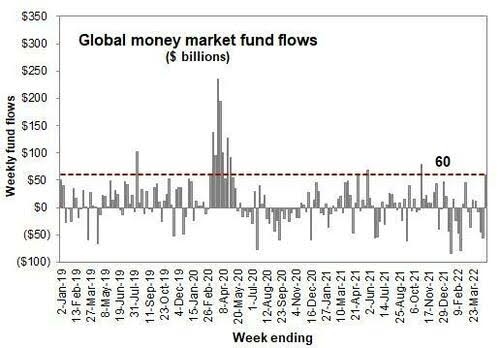 From Zerohedge Buyback Blackout Period Is Over, And 10 More Reasons Why Goldman Calls The End Of The Market Carnage | ZeroHedge

5. What Happens After Historic Bad Months? 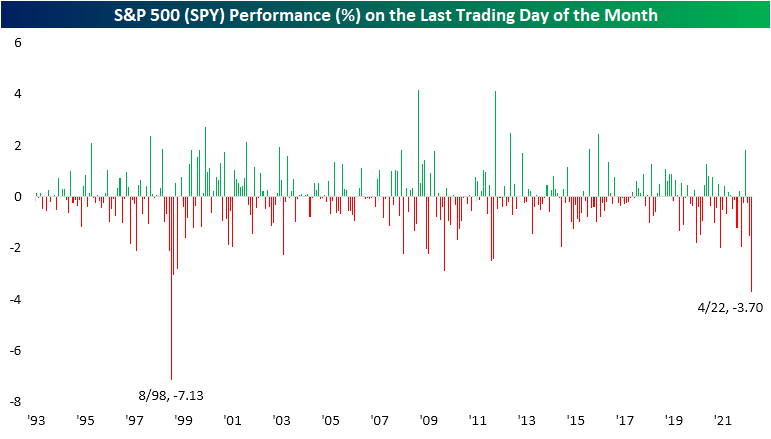 In the table below, we show all months since 1993 that SPY declined at least 2% on the last trading day of a month. Behind April, the next worst final day of a month and the only other month with an over 3% decline was September 1998, but back then, SPY had still managed to finish up MTD.  Finishing up MTD has been the exception rather than the rule of these occurrences, though, as November 1998 and October 2011 were the only other times that SPY fell over 2% on the last trading day of the month but still finished with a MTD gain.

As for where the S&P 500 has typically gone from there, the first trading day of the new month has only seen a move higher 46% of the time as the index has averaged a 30 bps decline. For the full month, though, performance is generally more positive with an average gain of 2.75% and positive returns almost 70% of the time. 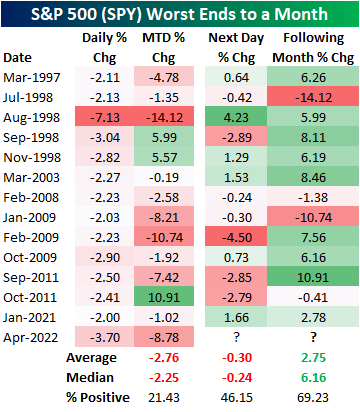 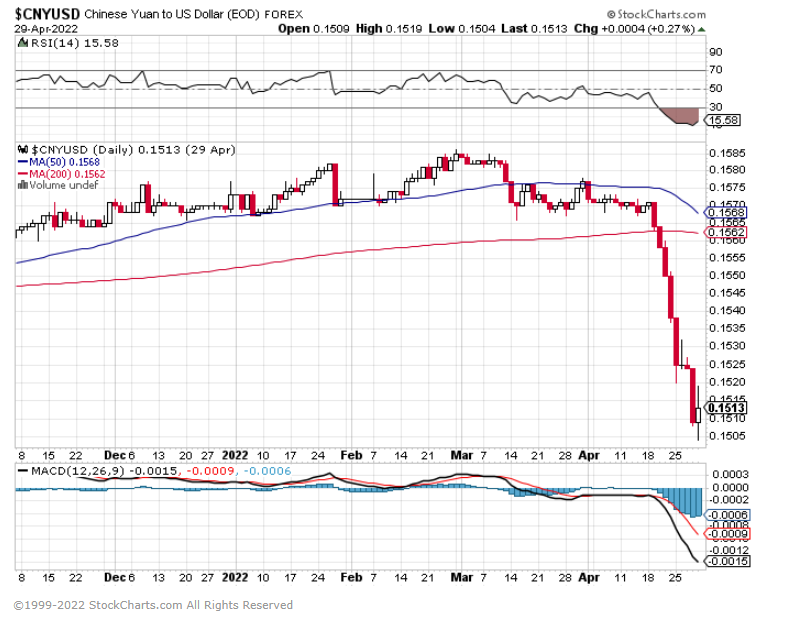 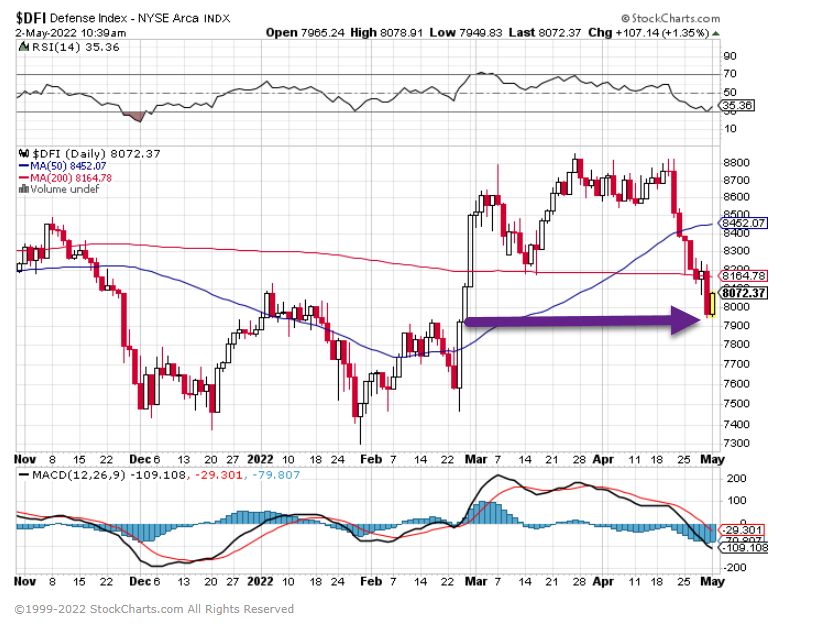 The United States: The employment cost index came in well above forecasts, spooking the markets. The concern has been a wage-price spiral. 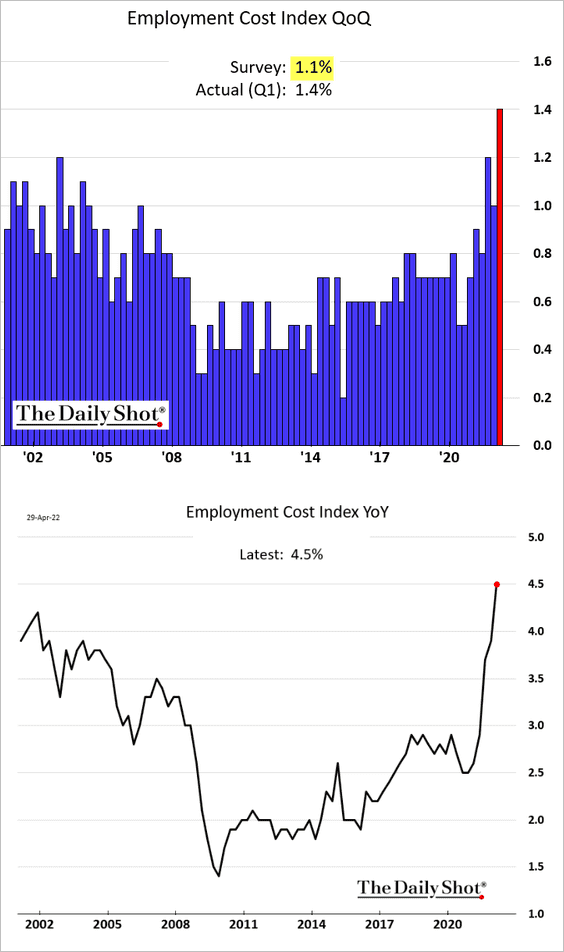 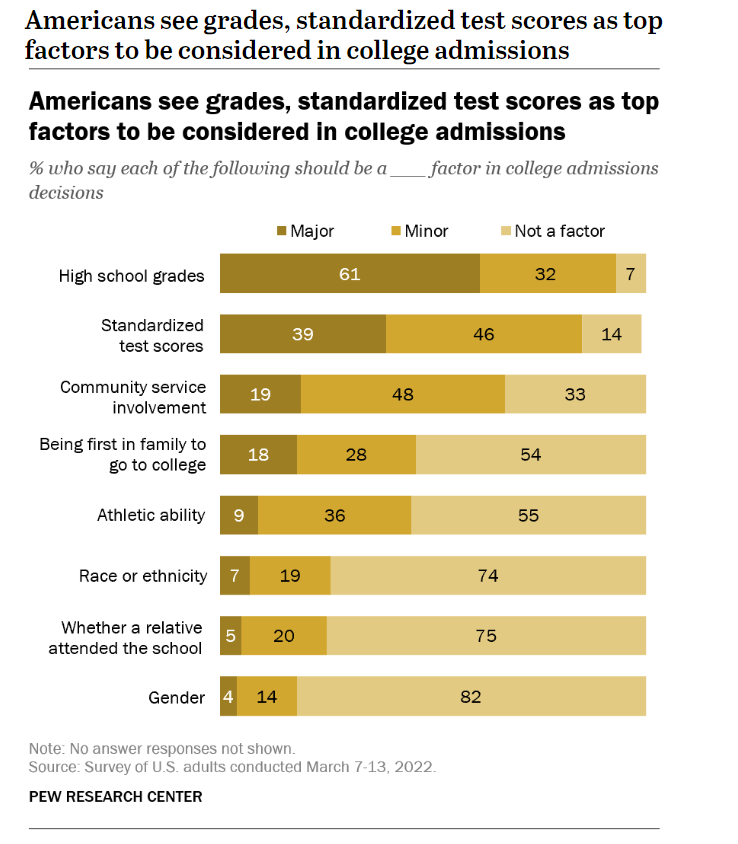 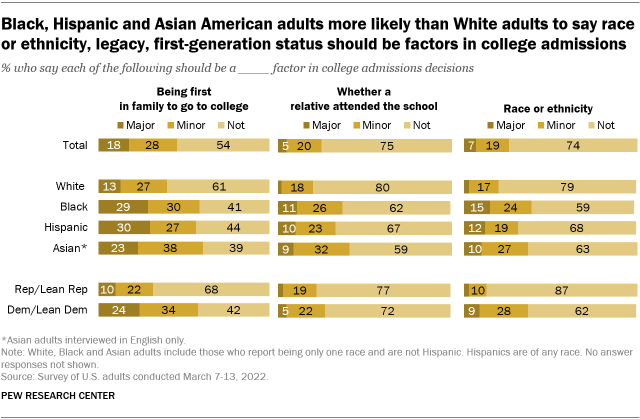 10. Study finds seven hours of sleep to be optimal from middle-age onwards

We know sleep to be an essential ingredient for a healthy brain, but scientists continue to explore what a good night’s rest looks like at different stages of life, and how it can impact on our vulnerability to cognitive decline. A wide-ranging new study involving almost half a million subjects has provided compelling new insights, suggesting seven hours of sleep per night to be best for brain health during middle and old age.

While good sleeping habits are known to be beneficial for everything from reducing our risk of cancer and heart failure to maintaining a healthy body weight, recently we’ve seen scientists shine a light on its relationship with Alzheimer’s and dementia.This includes studies finding an increased risk through disruptions to key sleep phases, short sleep durations and excessive daytime napping. On the more positive side of things, scientists have identified genes in “elite sleepers” that may lead to treatments for these types of neurodegenerative diseases.

This new research, carried out by scientists at the University of Cambridge and China’s Fudan University, involved the analysis of almost 500,000 adults between the ages of 38 and 73. This included survey data on sleeping patterns, mental health and wellbeing, along with cognitive testing. Brain imaging and genetic data was available for almost 40,000 subjects.

This enabled the scientists to tease out new insights around sleeping habits in middle and old age, and brain health. Building on findings from one 2018 study, the analysis found that both too little and too much sleep had negative effects, affecting visual attention, memory, problem-solving and processing speed. This also increased symptoms of depression, anxiety and worse overall wellbeing.

Seven hours of sleep was the amount the scientists concluded to be optimal for brain health, saying that sleeping too much or too little may be a risk factor for age-related cognitive decline. The findings also add further weight to an idea we saw explored through an interesting 2020 study that linked disturbances to slow-wave “deep” sleep and Alzheimer’s.

Previous research in animals and humans has shown that this type of fragmented sleep can can increase the accumulation of toxic proteins associated with Alzheimer’s disease. Further, slow-wave deep sleep is an important brain function that clears away waste products and toxic proteins. That 2020 research suggested that fragmented sleep could be an effective way to predict those at risk of developing neurodegenerative disease.

“Getting a good night’s sleep is important at all stages of life, but particularly as we age,” said Professor Barbara Sahakian from the University of Cambridge. “Finding ways to improve sleep for older people could be crucial to helping them maintain good mental health and wellbeing and avoiding cognitive decline, particularly for patients with psychiatric disorders and dementias.”

The research was published in the journal Nature Aging.