Jim Reid Deutsche Bank-I’ve just released my latest chartbook (“2022 – One of the worst years on record… so far..”), which shows how 2022 is shaping up to be one of the worst years on record for financial markets. In fact, as today’s CoTD demonstrates, the S&P 500 is currently on track for its worst H1 performance since 1932 at the depths of the Great Depression, having shed -22.3% so far this year in total return terms. That just edges out 1962, when the index lost -22.2% over the first six months of the year. (more below)

But for those with a traditional 60/40 type portfolio, the news doesn’t get any better, since 10yr Treasuries are currently on track for their worst H1 since 1788.

H2 is probably quite binary. If we don’t see a recession materialise over that period it might be tough for markets to continue to be as bearish as they have been, and a bounce back resembling history might be possible. However, it’s hard to see markets recovering if we see firm evidence of the recession. 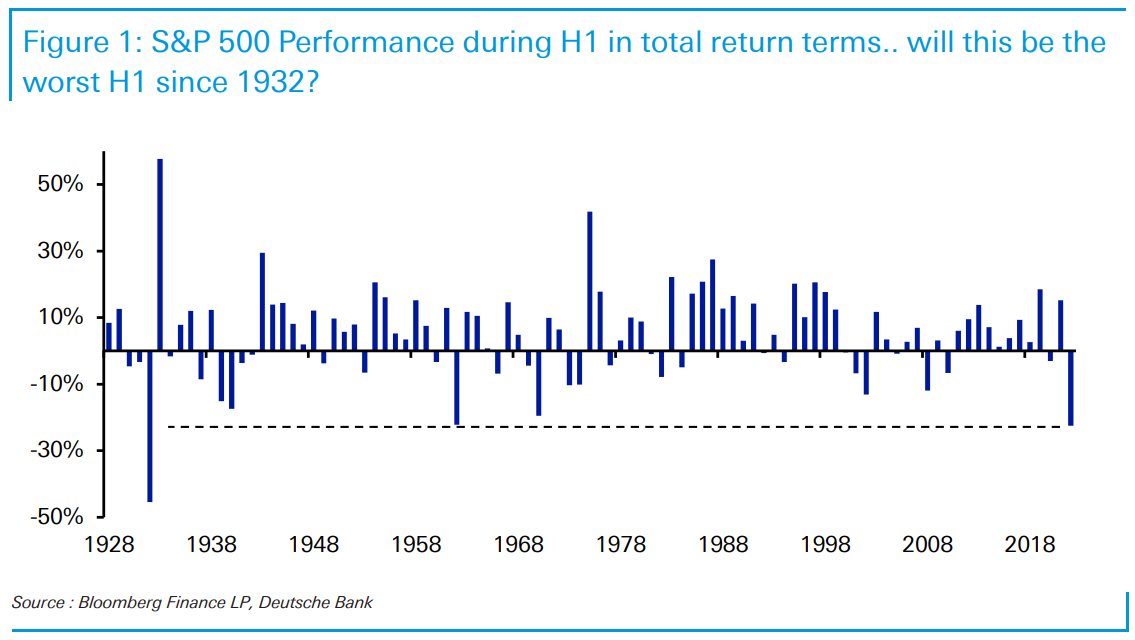 2. Covid Bull was Shortest Since WWII 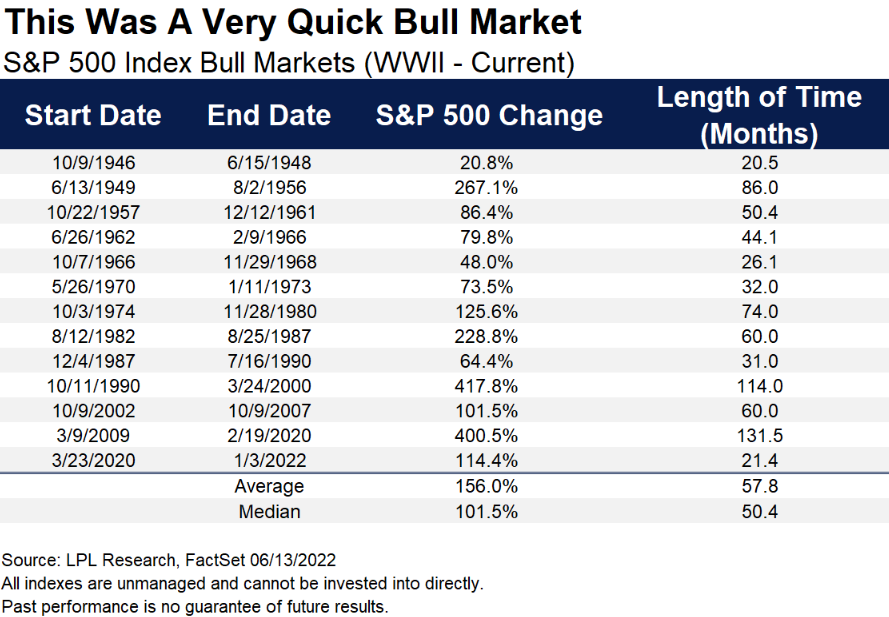 3. Last Week’s Sell Got to Leadership–Energy 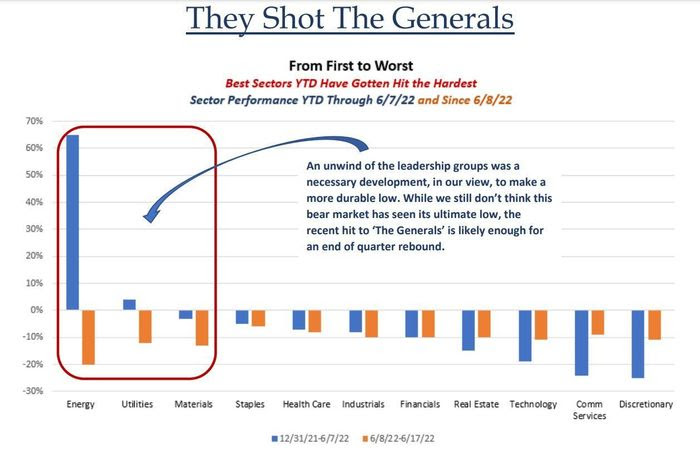 4. Will Gas Tax Holiday Move the Needle? 18.5 cents per gallon 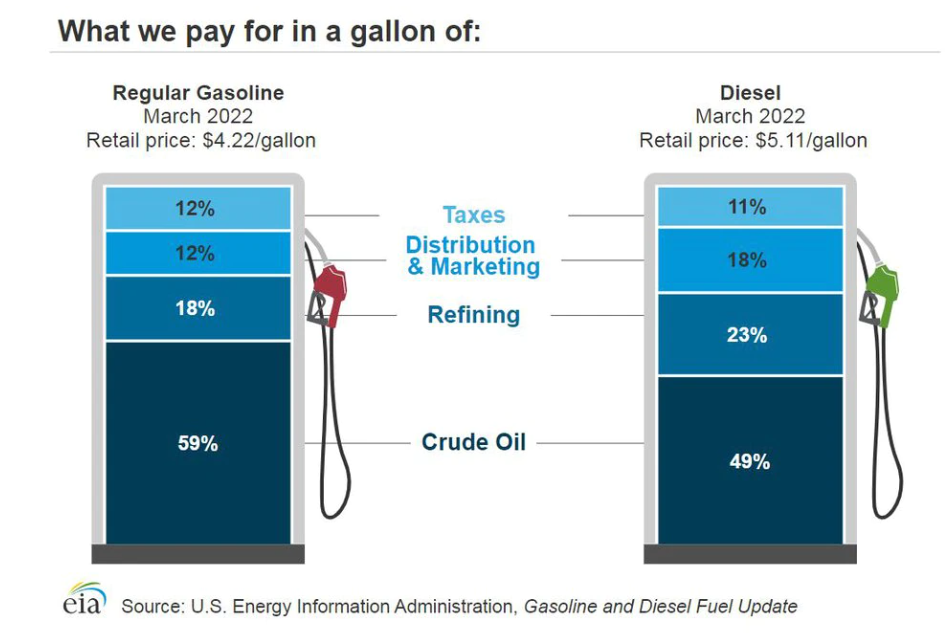 As Biden weighs a federal gas tax holiday, here’s what that could mean for prices at the pump–Lorie Konish@LORIEKONISH

For months, drivers across the U.S. face have faced eye-popping prices when they fill up their gas tanks.

A gallon of gas now costs an average of $4.97, according to AAA. That’s a slight improvement from earlier this month, when the national average crossed the $5 threshold for the first time. But prices are up from $4.59 a month ago and $3.07 a year ago.

However, in some states — like Washington, Oregon and Nevada — average gas prices are more than $5.50 per gallon. In California, the average is currently $6.38 per gallon.

The federal gas tax amounts to 18.4 cents per gallon, while states separately impose their own levies.

In February, Democratic Sens. Maggie Hassan of New Hampshire and Mark Kelly of Arizona proposed a bill that would suspend the federal gas tax through the end of the year.

Dave Lutz at Jones Trading Just $198 billion worth of initial public offerings and follow-on sales have been priced so far this year, a 70% drop from a year ago. That puts them on track for the lowest first-half haul since 2005 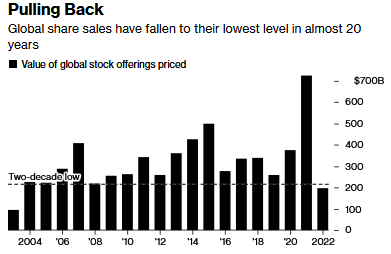 Same as 30 year yield I showed last week….50day just going thru 200day to the upside. 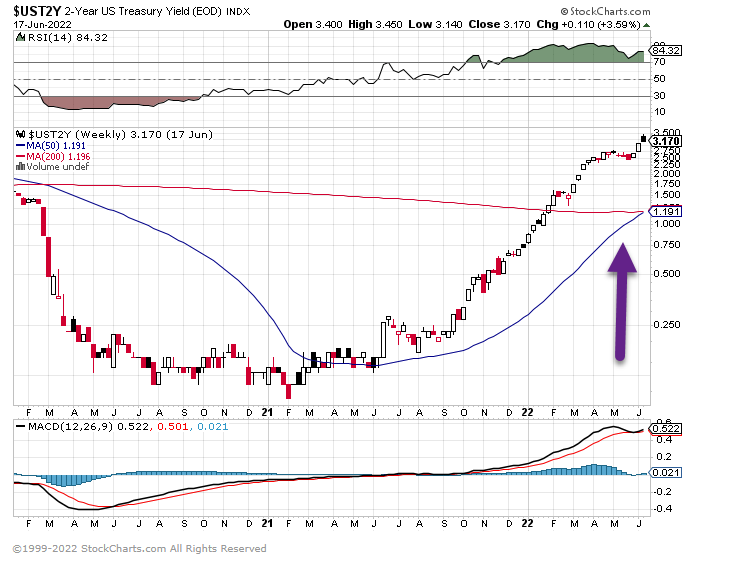 (Bloomberg) — China’s shipments of cars rebounded in May, with electric vehicle exports more than doubling, as Covid lockdowns gradually ended.

Car manufacturers in China shipped $1.2 billion worth of electric passenger vehicles, up 122% from a year earlier and almost triple the level in April, when car factories in Changchun and Shanghai such as those run by Telsa Inc were shuttered or barely open. Passenger cars worth $2.8 billion were exported, the fourth-highest monthly total in the past few years. 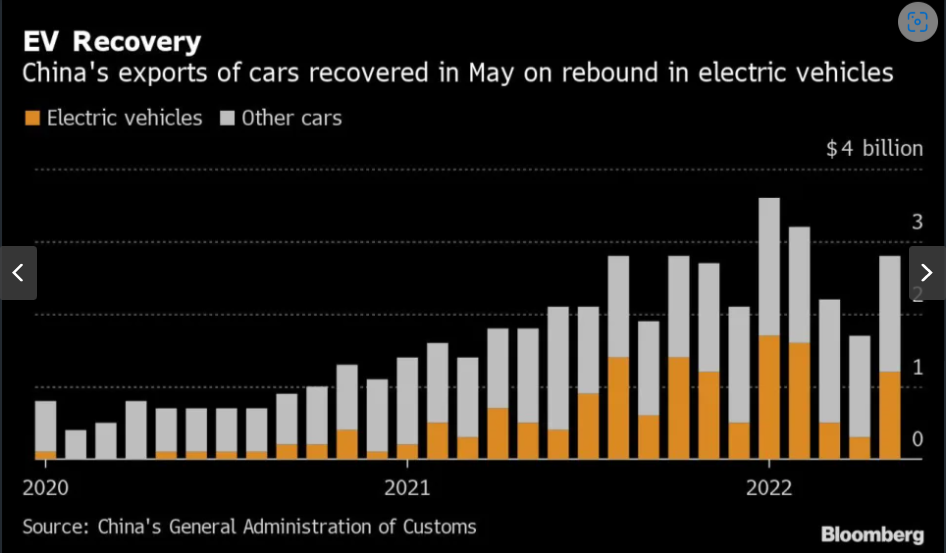 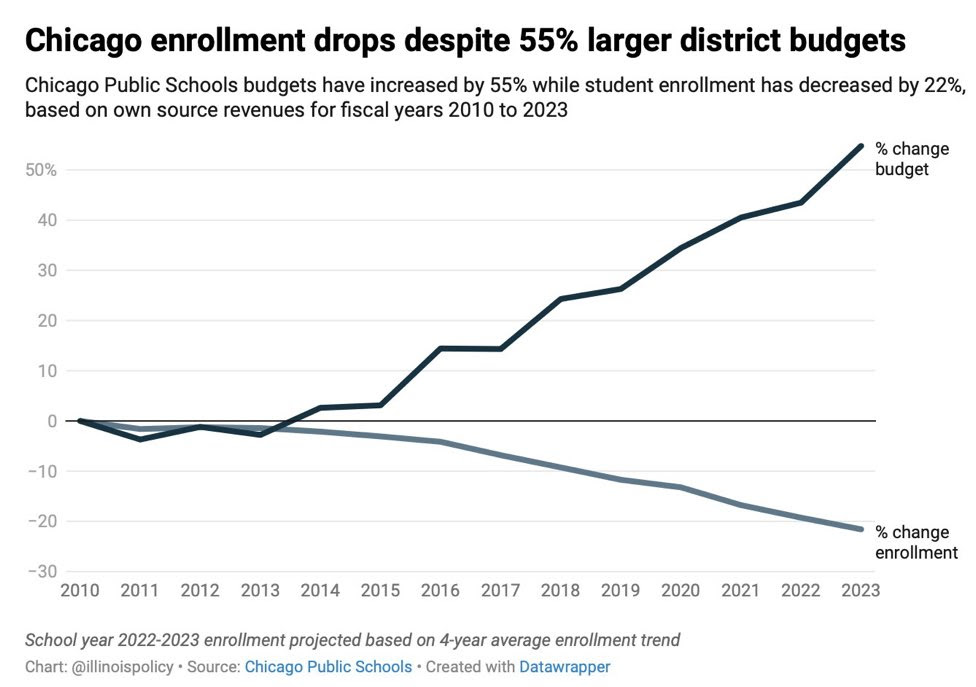 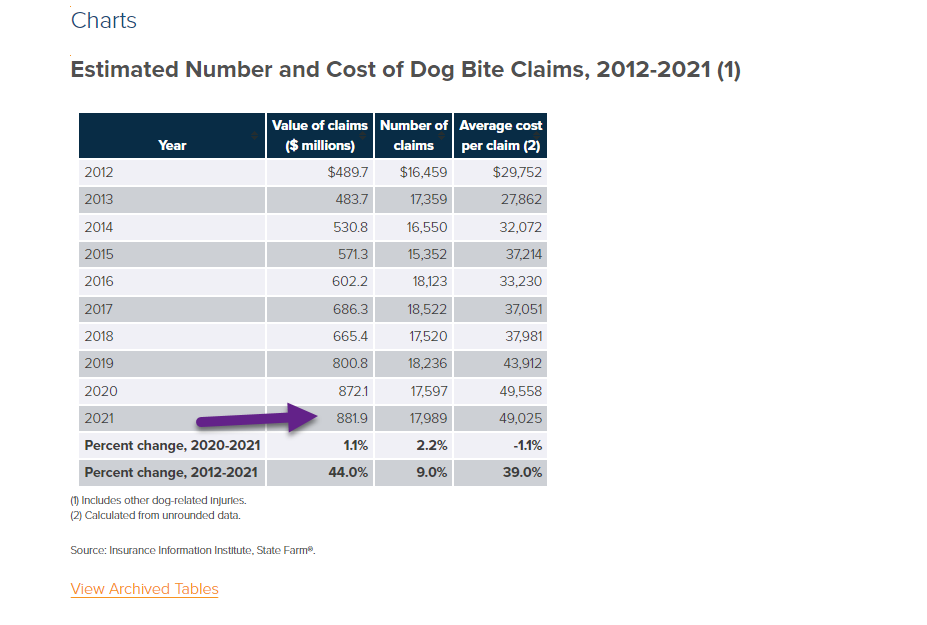 Sign up for the Peter Coy newsletter, for Times subscribers only.  A veteran business and economics columnist unpacks the biggest headlines. Get it in your inbox.

We had another bad inflation report last week.

Inflation over the past 12 months exceeded 8 percent, a level that evokes memories of America’s Great Inflation of the 1960s and ’70s. From the beginning of 1966 through 1981, the Consumer Price Index rose, on average, by more than 7 percent per year, peaking at over 13 percent in 1980. This period also saw two major and two minor recessions and an approximately two-thirds decline in the Dow Jones industrial average, when adjusted for inflation.

Are we in danger of repeating that experience?

The short answer: almost certainly not.

Although the inflation of the 1960s and ’70s had higher peaks and lasted much longer than what we have seen recently, it’s true there are some similarities to what we are going through now. The inflation of a half-century ago, like today’s, began after a long period when inflation was generally low. In both cases, heavy federal spending (on the war in Vietnam and Great Society programs in the 1960s, on the response to Covid in 2020 and 2021) added to demand. And shocks to global energy and food prices in the 1970s made the inflation problem significantly worse, just as they are doing now.

But there are critical differences as well. First, although inflation was very unpopular in the ’60s and ’70s, as it (understandably) is today, back then, any inclination by the Federal Reserve to fight inflation by raising interest rates, which could also slow the economy and raise unemployment, met stiff political resistance. President Lyndon Johnson, attempting to insulate the public from the economic costs of an unpopular war, put intense pressure on the Fed chairman, William McChesney Martin, to keep interest rates low. Johnson promised to raise taxes to pay for the war, and Martin accordingly refrained from raising rates for a time, but Johnson’s temporary tax surcharge in 1968 failed to cool an overheated economy, allowing inflation to gain a toehold.

Richard Nixon, angling for re-election in 1972, made it clear to Martin’s successor at the Fed, Arthur Burns, that he would not tolerate an economic slowdown before the election, and Burns took no significant action against inflation. Even after Nixon resigned in 1974, Congress continued to pressure Burns and the Fed to avoid anti-inflation policies that might slow the economy. For example, a 1978 law set a target for the unemployment rate of 3 percent for people 20 and older — well below its sustainable, noninflationary level at the time.

In contrast, efforts by the current Fed chairman, Jerome Powell, and his colleagues to bring down inflation enjoy considerable support from both the White House and Congress, at least so far. As a result, the Fed today has the independence it needs to make policy decisions based solely on the economic data and in the longer-run interests of the economy, not on short-term political considerations.

Besides the Fed’s greater independence, a key difference from the ’60s and ’70s is that the Fed’s views on both the sources of inflation and its own responsibility to control the pace of price increases have changed markedly. Burns, who presided over most of the 1970s inflation, had a cost-push theory of inflation. He believed that inflation was caused primarily by large companies and trade unions, which used their market power to push up prices and wages even in a slow economy. He thought the Fed had little ability to counteract these forces, and as an alternative to raising interest rates, he helped persuade Nixon to set wage and price controls in 1971, which proved a spectacular failure.

Inflation gained momentum over the decade, ending only with the shock treatment applied by the Fed under Paul Volcker in the early 1980s, which resulted in a deep recession.

Burns wasn’t wrong that factors beyond the Fed’s control can contribute to inflation. Supply-side forces are, indeed, important today — not only the increases in global energy and food prices already mentioned but also pandemic-related constraints, like the disruption of global supply chains. Unfortunately, the Fed can do little about these supply-side problems.

Nevertheless, today’s monetary policymakers understand that as we wait for supply constraints to ease, which they will eventually, the Fed can help reduce inflation by slowing growth in demand. Drawing on the lessons of the past, they also understand that by doing what is needed to get inflation under control, they can help the economy and the job market avoid much more serious instability in the future.

In short, the lessons learned from America’s Great Inflation, by both the Fed and political leaders, make a repeat of that experience highly unlikely. The Fed today recognizes that it must take the leading role in controlling inflation, and it has the tools and sufficient political independence to do so. After a delay caused by a misdiagnosis of the economy in 2021, the Fed has accordingly turned to tightening monetary policy, ending its pandemic-era bond purchases, announcing plans to shrink its securities holdings and raising short-term interest rates.

Markets and the public appear to understand how the Fed’s approach has changed from the earlier era I described. Although the Fed has raised interest rates only twice this year (this week’s meeting will no doubt bring an additional increase), financial conditions have already tightened significantly (for example, mortgage rates have risen by more than two percentage points in the past year) as markets anticipate that policymakers will persist in their anti-inflation campaign. And while market indicators and surveys of consumers reveal that inflation is expected to remain high over the next year or two, for the most part, they suggest continued confidence that, over the longer term, the Fed will be able to bring inflation down close to its 2 percent target.

This confidence in turn makes the Fed’s job easier, by limiting the risk of an “inflationary psychology,” as Burns once put it, on the part of the public. Since Mr. Volcker’s conquest of inflation in the 1980s, bursts of inflation have tended to die away more quickly and with less need for monetary restraint than in previous episodes.

None of this implies that the Fed’s job will be easy. The degree to which the central bank will have to tighten monetary policy to control our currently high inflation, and the associated risk of an economic slowdown or recession, depends on several factors: how quickly the supply-side problems (high oil prices, supply-chain snarls) subside, how aggregate spending reacts to the tighter financial conditions engineered by the Fed and whether the Fed retains its credibility as an inflation fighter even if inflation takes a while to subside.

The Fed’s greater policy independence, its willingness to take responsibility for inflation and its record of keeping inflation low for nearly four decades after the Great Inflation, make it much more credible on inflation today than its counterpart in the ’60s and ’70s. The Fed’s credibility will help ensure that the Great Inflation will not be repeated, and Mr. Powell and his colleagues will put a high priority on keeping that credibility intact.