1.Zero Inflation Showing Up in System….The Betting Line on Another Rate Rise Falls Below Even Money.

Rates: The market-implied probability of a third Fed rate hike this year dipped below 40%. 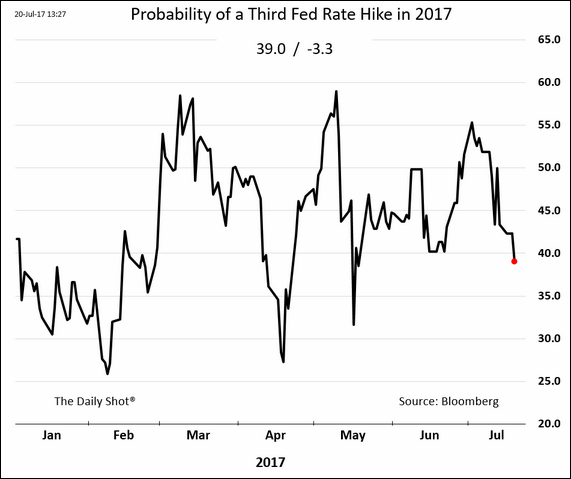 2.The Strength of International Economies is Sometimes Measured by S.Korea….The Export Leader….. 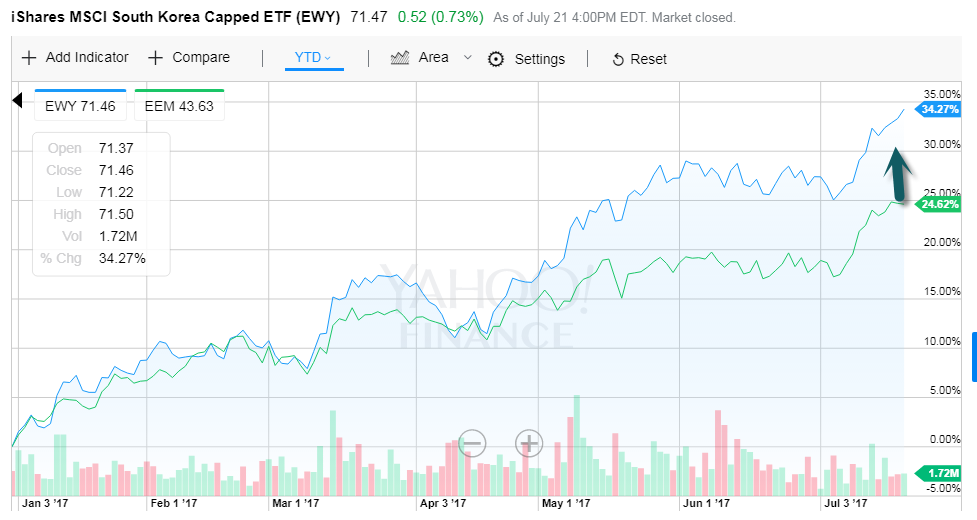 Korea breaks out to all-time highs. 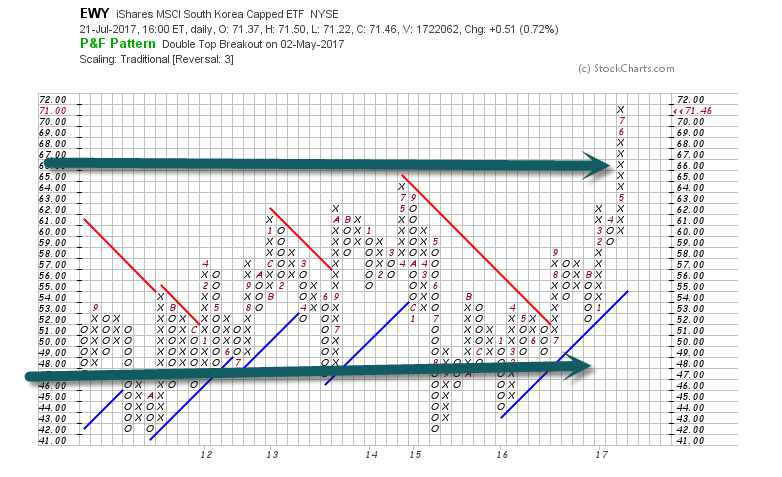 FLOW SHOW– Flows into European stocks surged to their highest level since Emmanuel Macron clinched victory in French elections in May, providing further ammunition to continental equities as interest in US stocks fades (Lipper / EPFR)\ 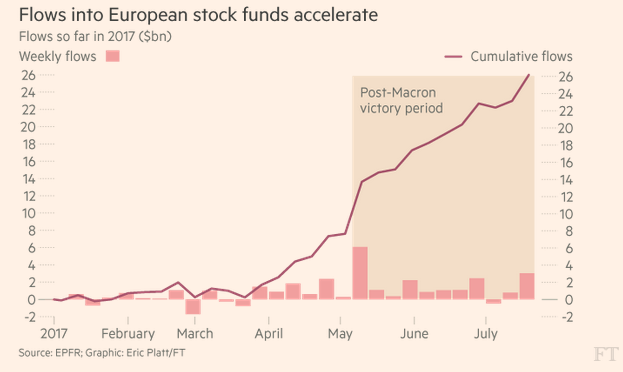 4.80% of Chinese Stock Market Trading is Mom/Pop Retail vs. Less than 10% in U.S…..They Keep Moving from Market to Market then the PBOC Changes Rules and it Pops

Remember the Surge in Margin Loans and FXI Doubled…Then the government popped the margin bubble. 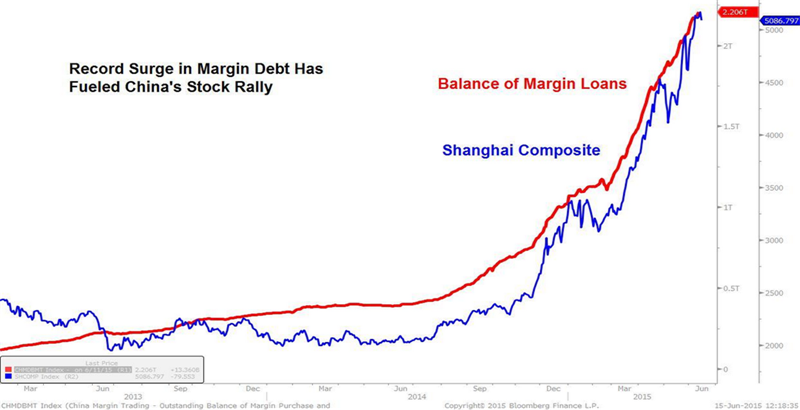 At one point 99% of Bitcoin Trading was in Yuan…The government stepped in and it dropped 2/3 overnight. 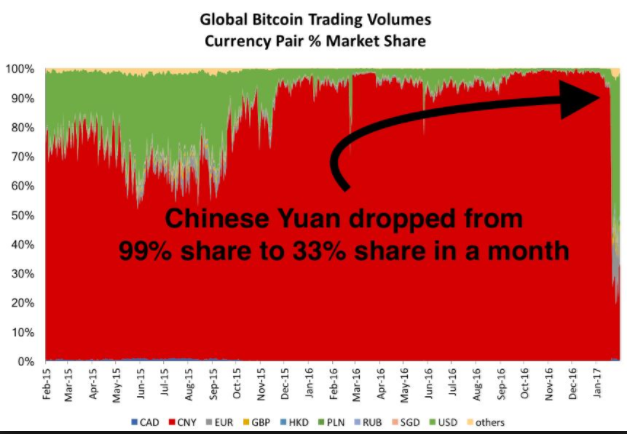 Now the government is cracking down on housing…Look at Wealth in housing vs. U.S. 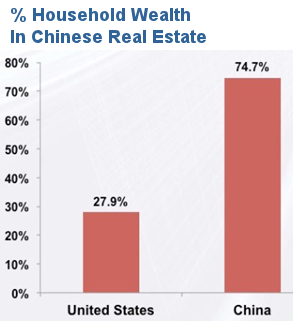 5.Spike in Insider Sales…It has not been predictive this year.

Stock moves are ‘downright insane’ after earnings, and investors have to get it right

so serious? Because earnings moves are bigger than ever, and it’s crucial to bet correctly. Warner Bros.

If you want to make money in the stock market, you’d better nail earnings season. Or else.

The reason is simple: Quarterly results are exerting unprecedented influence over stock returns and, by extension, portfolio performance.

In recent quarters, reporting companies have seen their shares move four times the normal daily average, the most in the past 18 years, according to data compiled by Goldman Sachs. That’s the type of volatility for which traders have been starved in a market that’s been sapped of the price swings that normally create moneymaking opportunities.

But it doesn’t end there. Amid all this talk of generating positive returns, the punishment for missing earnings is also the harshest in almost two years. In the first quarter of this year, companies that fell short dropped more than 2.5% in a single day, on average, according to Wells Fargo data. 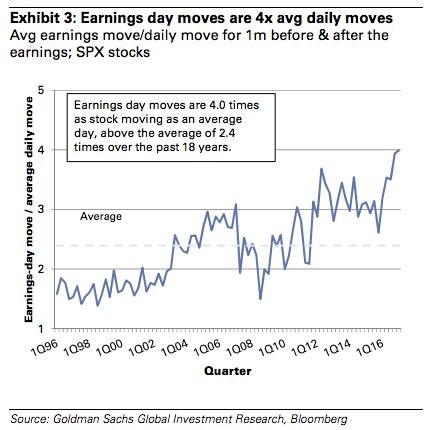 It must have raised some eyebrows on Monday when supermarket chain Kroger launched a big $1.5 billion bond sale—with a primary goal of funding its pension plans. Contributing to retirement plans may seem to be a surprising priority for a leader in an industry that is now squarely in Amazon.com’s sights.

In fact, issuing debt to fund corporate pensions is a growing trend. A bunch of large companies have done the same thing as Kroger (ticker: KR) this year, including FedEx(FDX), Delta Air Lines (DAL), and DuPont (DD).

To investors more accustomed to companies issuing debt to fund acquisitions and stock buybacks or issue dividends, this may sound like a troubling trend. But it is actually a very good idea. More companies with underfunded pension plans should do the same thing.

At midyear, the average corporate defined-benefit pension plan was only 83% funded, according to Goldman Sachs Asset Management. That’s up from 81% at the start of the year, but it’s still a big shortfall. General Electric (GE), Lockheed Martin (LMT), andExxon Mobil (XOM) all had plans funded at just around 70% of assets at the end of last year. The shortfalls are “despite very benign equity markets,” notes Kevin McLaughlin, who heads liability risk management in North America at Insight Investment. “The need to make contributions to close these deficits is real.”

Companies are looking to avoid the higher premiums required on liabilities by the Pension Benefit Guaranty Corp., a government agency that acts as a backstop when plans fail. The cost per thousand dollars of unfunded benefits has more than tripled in recent years, making it more attractive for employers to shift risk to bondholders. 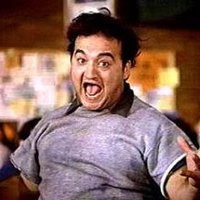 Walmart actually offers 1,600 organic grocery items, including a line of packaged goods from the Wild Oats brand, which once was a chain of natural-food stores that was bought by Whole Foods. 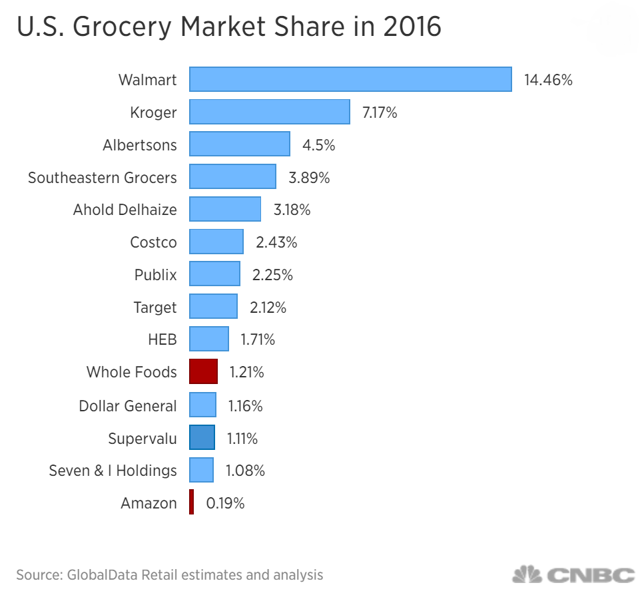 9.Read of the Day…..Top 10 has discussed at length the lack of wage growth affecting interest rates and housing.

For the first time in years, pay for the lowest-income Americans is rising faster than for other groups.

Weekly pay for full-time earners at the lowest 10th percentile of the wage scale rose at a faster rate last quarter, year-to-year, than for any other group measured by the U.S. Labor Department—including those at the top of the income scales who earn five times as much.

The shift for low-income workers—including restaurant workers and retail cashiers—who make about $10.75 an hour, is a sign that a tightening labor market is delivering better pay to workers who largely haven’t shared in gains since the recession ended eight years ago, according to economists and government data. Last quarter marked the first time since late 2010 that this earning group’s gains outpaced all others, including the 90th, 75th, 50th and 25th percentiles. 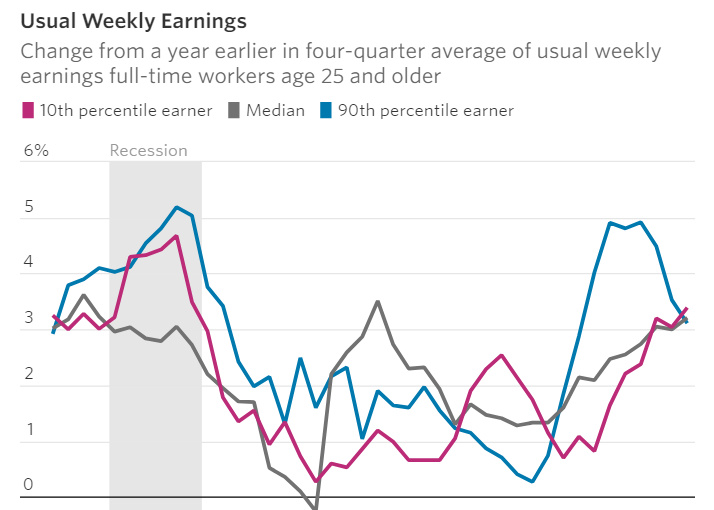 10.One Thing That Beats Motivation: Acres of Diamonds

Have you ever heard the story, Acres of Diamonds, by Russell Conwell?

It’s a classic case of what I refer to as the number one source of stress in successful people’s lives.

As the story goes, an African farmer began to hear word of other farmers who had gotten rich discovering diamonds. This farmer became so excited that he sold his farm and went off on a wild expedition to find his own diamond mine.

Alas, he spent years searching in vain. He ran out of money, lost all hope, and threw himself in a river to drown.

Back on the old farmer’s land, the new owner stumbled across a small stream on his property one day. He noticed something shiny under the surface, reached down, and picked out a pretty stone. So pretty was it, that he put it above his fireplace for everyone to admire.

One day a visitor saw the stone and rushed over to examine it. His eyes nearly popped out of his head as held it in his hand.

“Do you know what this is?” he asked the farmer.

The farmer shook his head. He thought it was a worthless crystal.

The visitor was quick to correct him.

“This is one of the largest diamonds the world has ever seen!” the visitor said.

The farmer was surprised. It was not unusual to see many gems just like it in his creek.

It turned out that this farm was to become one of the biggest diamond mines in Africa. But pity the first farmer who had sold it, thinking his treasure lay elsewhere. He had sold his land for pennies on the dollar and sacrificed his life chasing the wealth he desired, only to have it hiding within reach at home.

The big lesson from this story is easy to see:

The first farmer didn’t bother to look at, or appreciate, what he had. He didn’t believe there could be any value in his farm, so he gave away everything in exchange for nothing. He didn’t bother to invest the time or energy in exploring his farm, and so he chased worthless dreams around the continent. He threw away his dreams because he refused to do the work that mattered.

Conwell’s story has had massive impact on millions of readers spanning generations because we all recognize this mistake in ourselves.

Due to our self-limiting beliefs (or simple ignorance) we often fail to recognize that what matters has been here all along.

This could refer to our relationships, our talents, or our opportunities. The old saying, “You don’t know what you’ve got until it’s gone,” applies.

If we only had the wisdom and patience to do the work we could find happiness, success, and true wealth in what we already have.

But it’s human nature to believe the grass is greener on the other side, and to chase shiny objects in business and personal life, always looking for something better than what we have. Sometimes this pursuit is simply because we’ll do anything to avoiding doing the work that will bring us riches from our current resources.

It’s amazing how hard we’ll work and how much time we’ll waste to avoid doing the work that matters.

Acres of Diamonds is a warning. Before you chase another opportunity, before you dump one relationship for an exciting new one, stop and think. These greener pastures may not be what they seem. Perhaps it’s better if you give your own garden and stream a thorough investigation before you leave home.

I thought of this book recently when giving advice to one of my Perfect Life Workshop clients. He had significant and obvious problems to fix in his business, but instead of staying home and doing the work he was heading off to another motivational seminar.

“The Acres of Diamonds in your life are right here, right now, within your reach,” I told him. “The real riches in your life will come from fixing the hard, nitty gritty problems in your personal situation and business systems, not in attending motivational seminars or reading inspirational books / watching inspirational videos. Those things are fluff, and nutritionally devoid of real results.”

And I’m sure there are Acres of Diamonds in your life right now as well.

The problem is they’re buried in the mud, and you’re going to have to roll up your sleeves to get them. And even when you do, those gems will still likely require you to spend hours polishing them up.

This goes for personal relationships and professional opportunities. At work we need to dig deep into the problems that exist with our team members, our systems, and our schedule. And in our personal lives, we need to lean into difficult conversations, make the apologies, and overcome conflicts to polish the gems we already have.

These are all problems that don’t disappear from getting “pumped up” or inspired.

They only get fixed when you roll up your sleeves, spend time under the hood, and get your hands dirty.