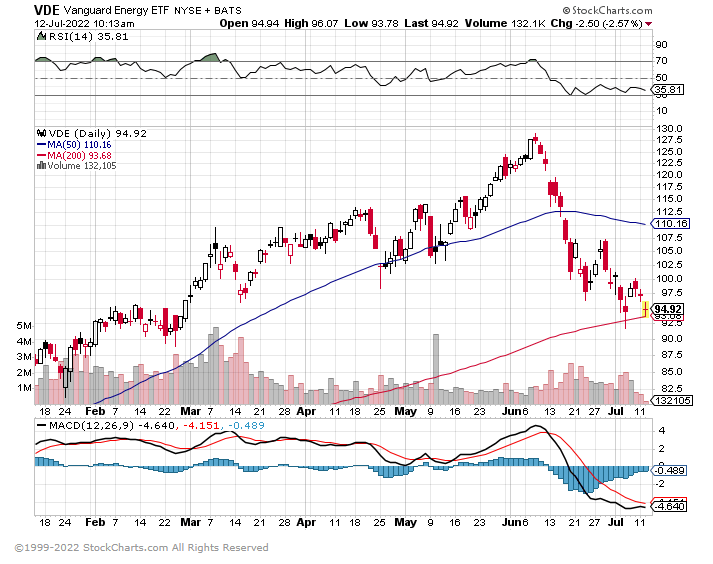 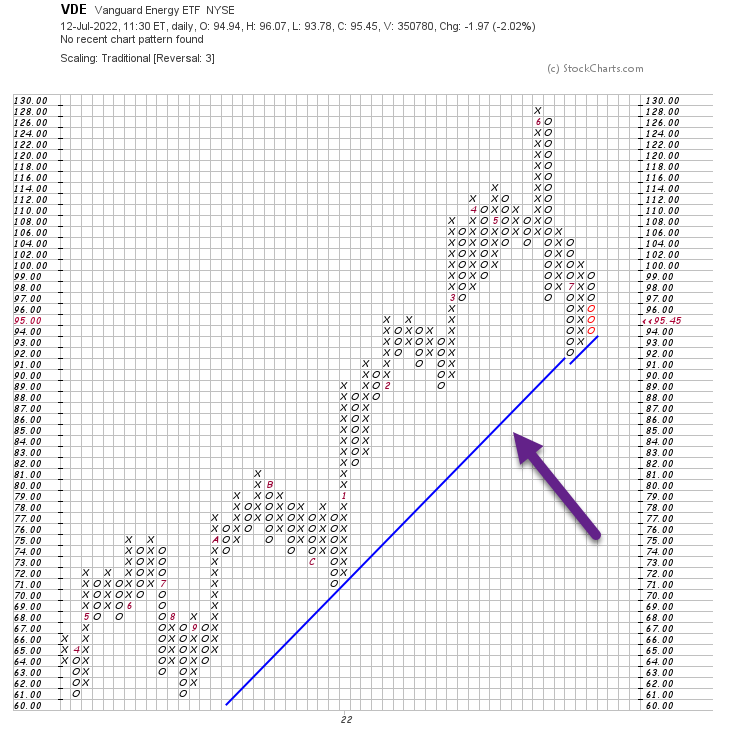 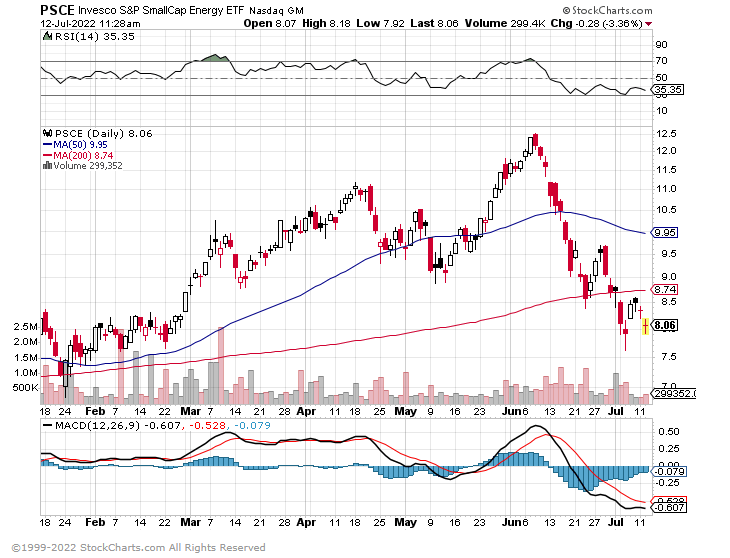 From Dave Lutz at Jones Trading Investors dumped petroleum-related derivatives last week at one of the fastest rates of the pandemic era as recession fears intensified – Hedge funds and other money managers sold the equivalent of 110 million barrels in the six most important petroleum-related futures and options contracts in the week to July 5.  Fund managers have now sold a total of 201 million barrels in the past four weeks, according to position records published by ICE Futures Europe and the U.S. Commodity Futures Trading Commission. 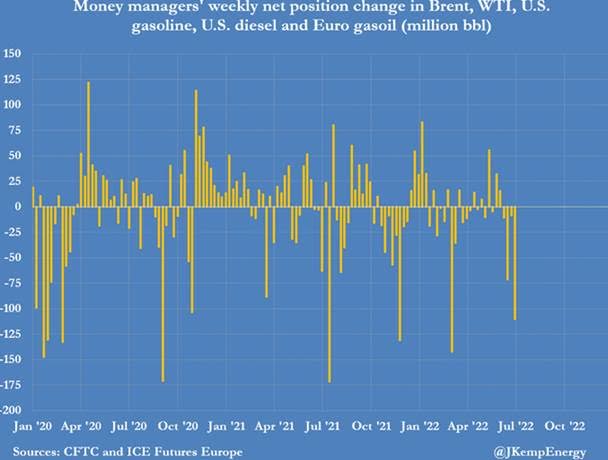 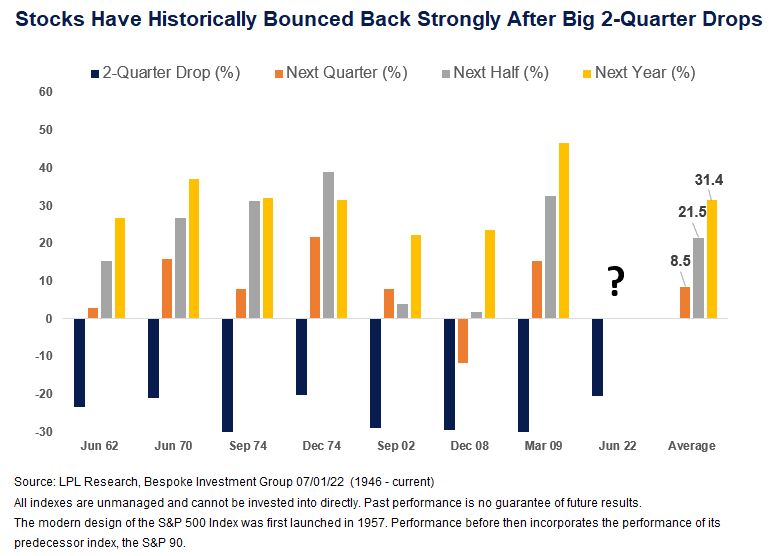 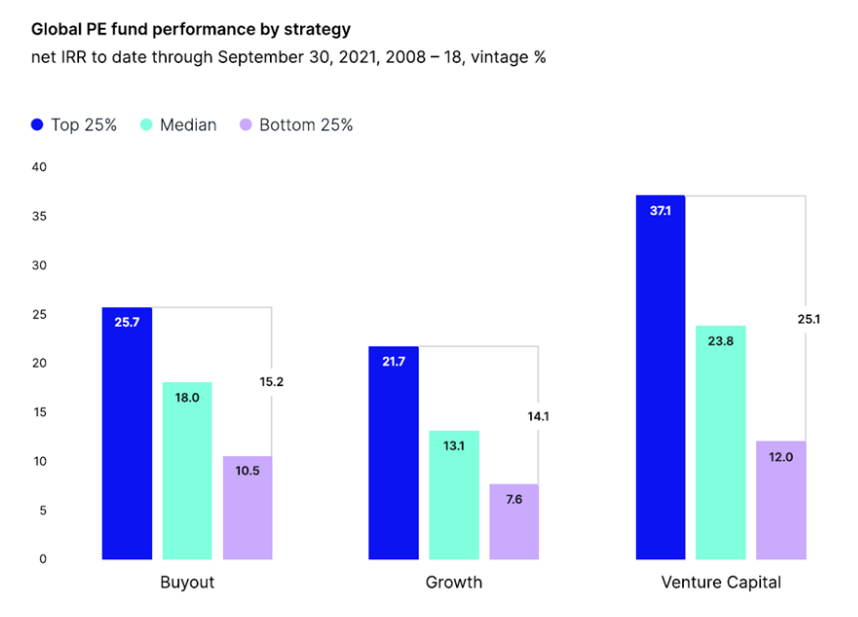 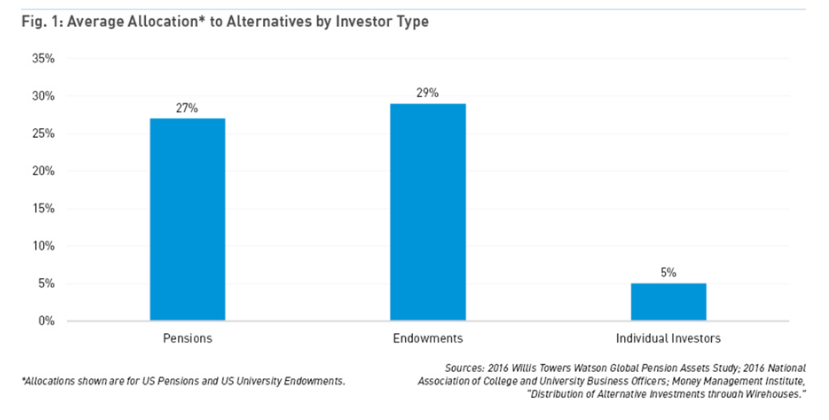 Dry Powder is Committed Capital that has not yet been Called 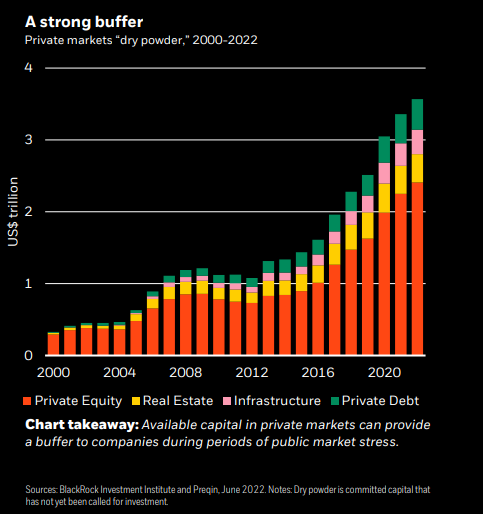 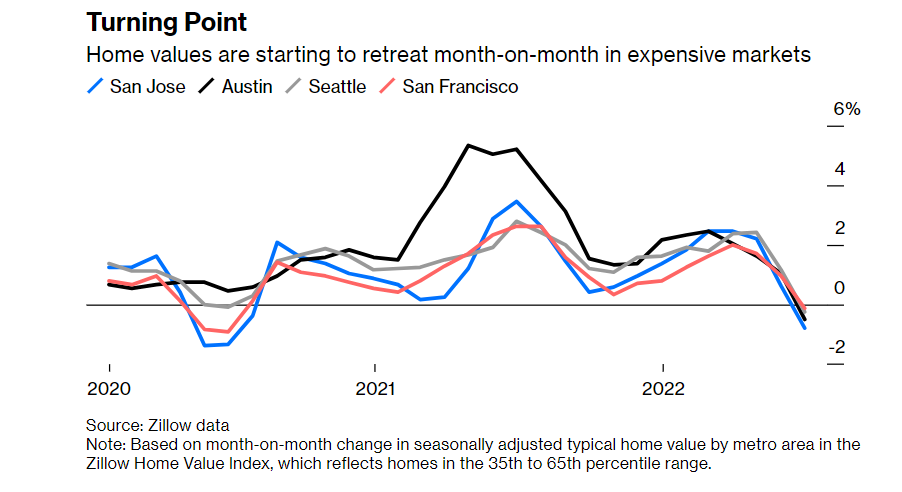 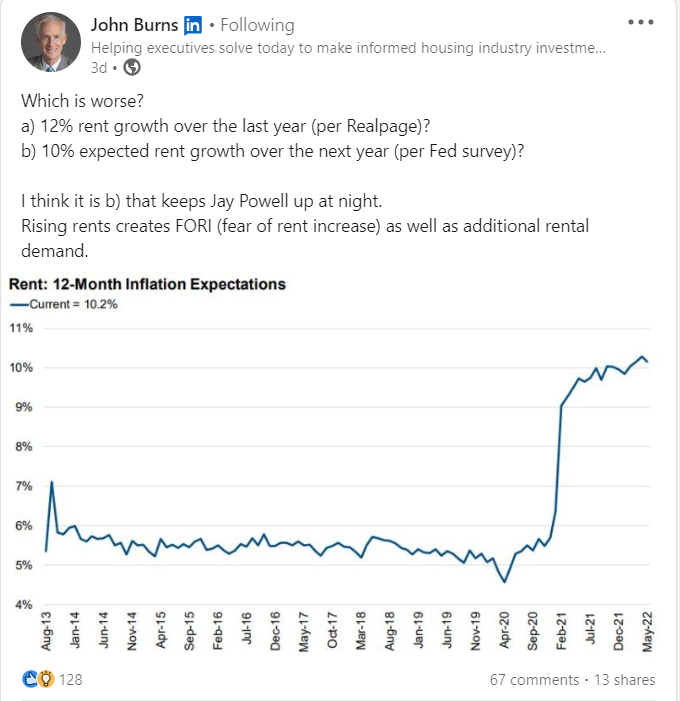 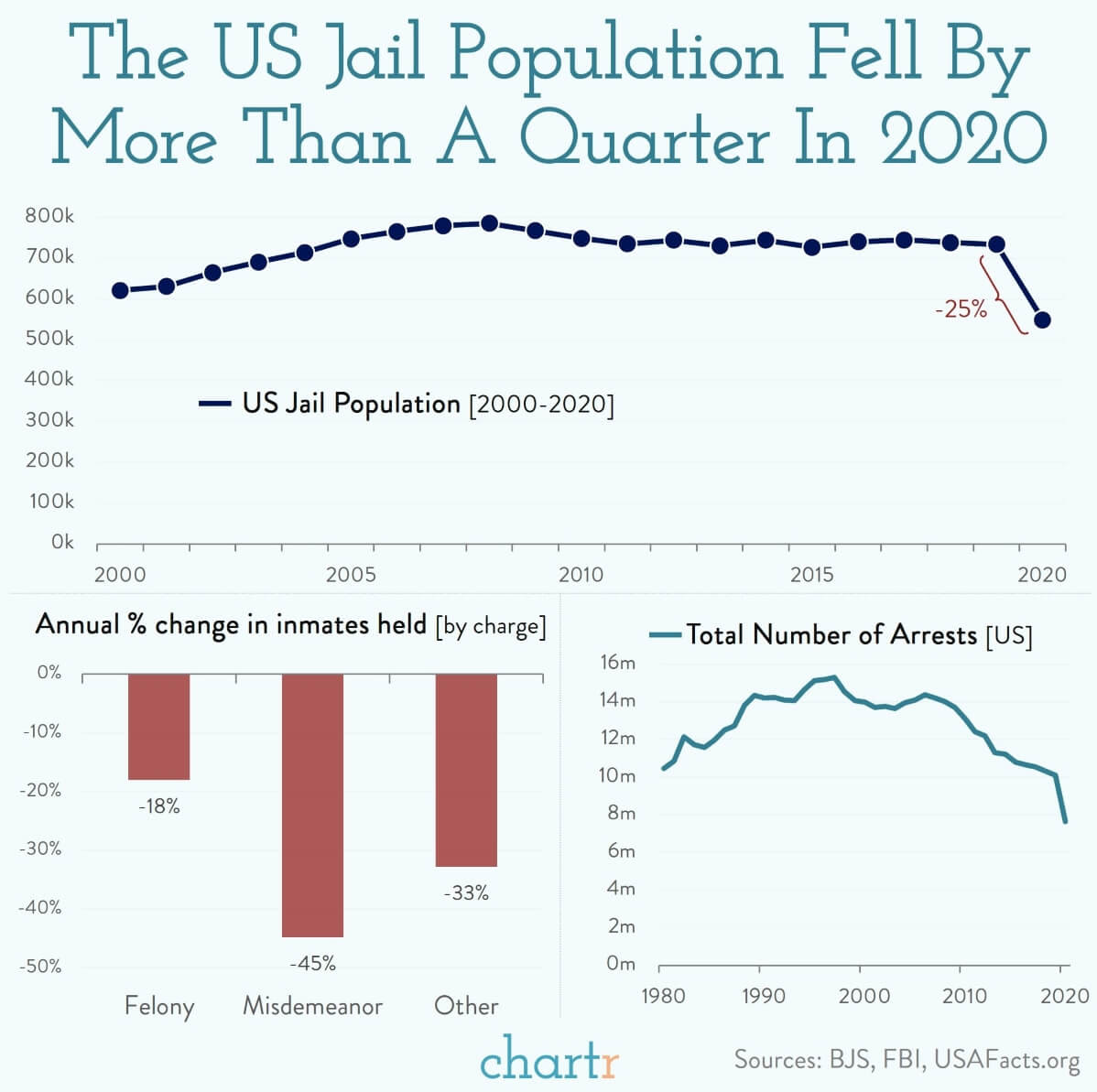 The tech exodus narrative is a distraction. The real domestic migration trend is … less migration. Specifically, people aren’t moving. In 1948 roughly a fifth of Americans changed residences. That number has been steadily declining since. During the pandemic, we read opinion pieces about everyone quitting their job and moving to Maine. There was a feeling that migration habits were changing; in reality the song remains (increasingly) the same. In 2021 only 8.4% of Americans moved — an all-time low.

It’s been happening for several decades, though nobody can figure out why. An aging population and a younger cohort described as the “complacent generation” are factors, but there must be more. Lack of portable health care and a decline in the lifestyle once sought in the West could also be explainers. My theory is that, like everything else, mobility has become a luxury item costs can only be borne by college grads (who are themselves increasingly anchored by student loan debt).

American mobility has been halved in three decades. Contrast that with China, where over 370 million people live somewhere besides their home region. (Another contrast: A mere 1 million foreigners live in China, placing it 54th among nations by immigrant population.) Why does it matter? Because when capital is not allocated to its best use, growth declines. A lack of mobility also affects culture, resulting in less dynamism, increased aversion to risk, and suspicion of outsiders. Yes, Covid spurred some relocation, but, like the “renewed” labor movement, that’s a blip that likely won’t reverse the secular decline. The problem isn’t that a tech Karen is leaving the Bay Area, it’s that not enough people are leaving any area. “Remote Work” should be called “Work from Home” as it’s decreasingly remote, just at home. Six in 10 people who move stay within their county; eight in 10 stay in-state. 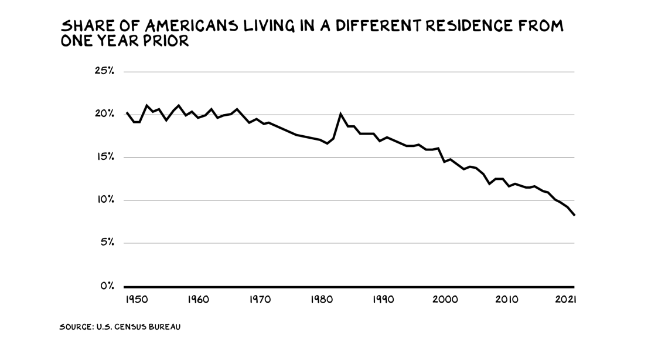