“With over 71% of S&P 500 companies finished reporting revenues and earnings for Q2-2021, the revenue and earnings surprises are at their lowest levels since the pandemic recovery began. Revenues are beating the consensus forecast by 2.5%, and earnings have exceeded estimates by 5.6%.”  –Ed Yardeni

Consider the Yardeni chart (top) showing earning surprises: Despite a variety of economic and geopolitical negatives, earnings have been holding up relatively well. (Revenues, too). And given that we are just about 3/4s of the way through Q2 earnings season, the odds of further surprises tend to drift lower (the bigger upside/downside surprises tend to pre-announce). by Barry Ritholtz 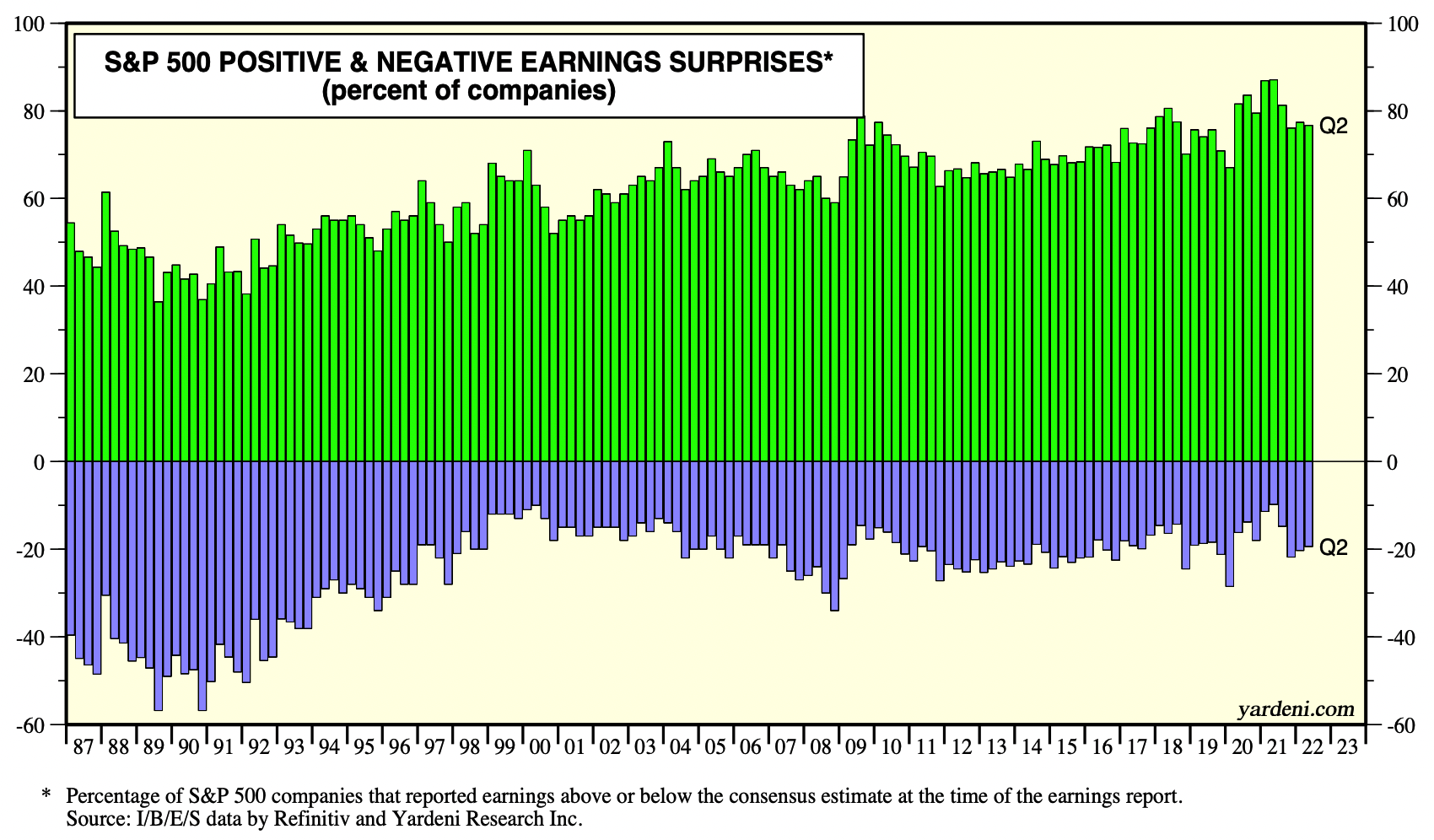 The Daily Shot Blog The average total return for the S&P 500 the year following a yield curve inversion is almost 10%. Will we witness a similar outcome? 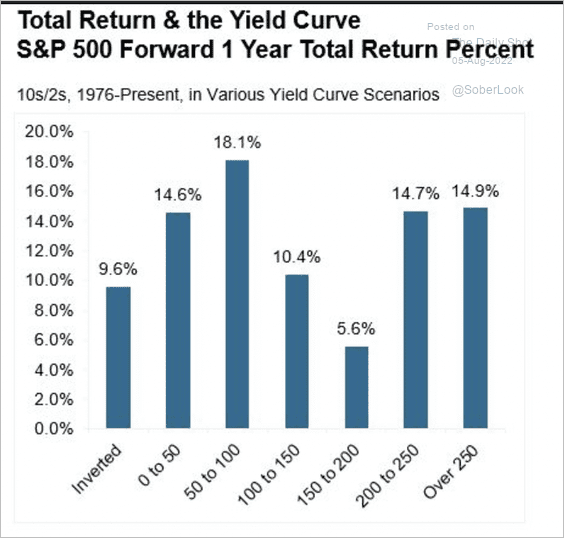 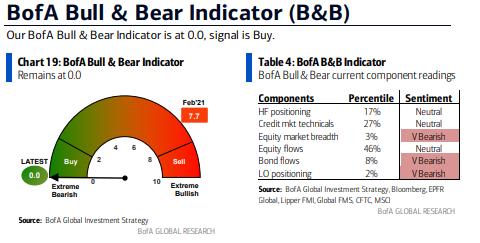 4. Hedge Funds Using Futures to Bet Against Stocks and Bonds 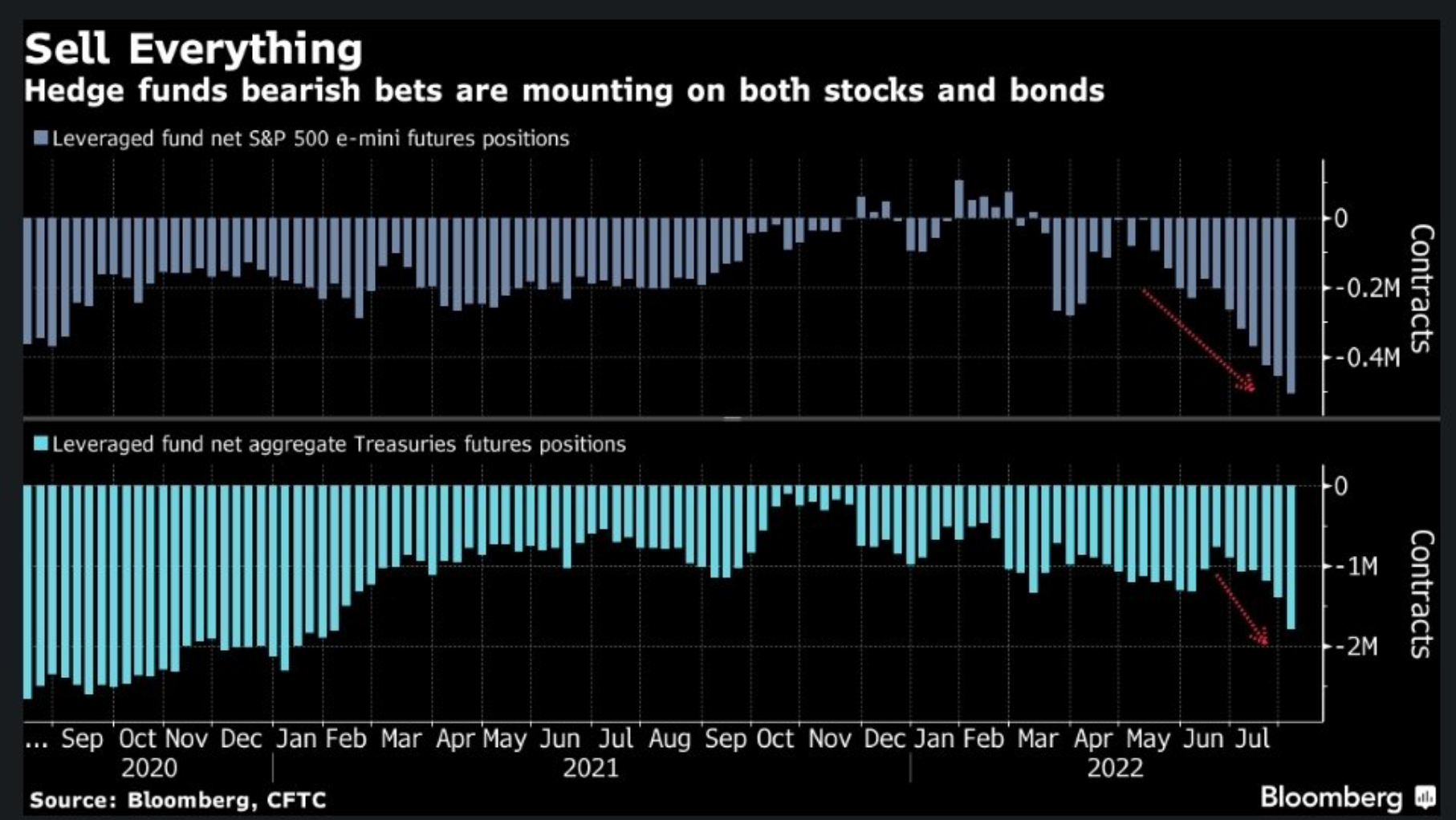 5. China’s Next Credit Crisis After Real Estate…..Lending to Distressed Countries

For China, the war implies yet another increase in the exposure of its overseas loan portfolio towards debtor countries at risk of default. China’s exposure towards distressed debtors had started its upward march as early as the mid-2010s, when Venezuela defaulted on its debts. Default risks intensified and spread geographically with the pandemic, when more and more developing economies entered distress; almost 60% of low-income countries are now in debt distress or at high risk.2 As a result, China’s state banks now hold a large amount of potentially ‘distressed’ debt. Figure 1 shows the share of China’s total credit portfolio to borrowing countries in distress, which has increased from about 5% in 2010 to 60% at present. The figure traces the share of cumulative overseas lending that has been extended to countries currently in debt distress or involved in a war.

Figure 1 Share of Chinese loan claims to borrowers in distress 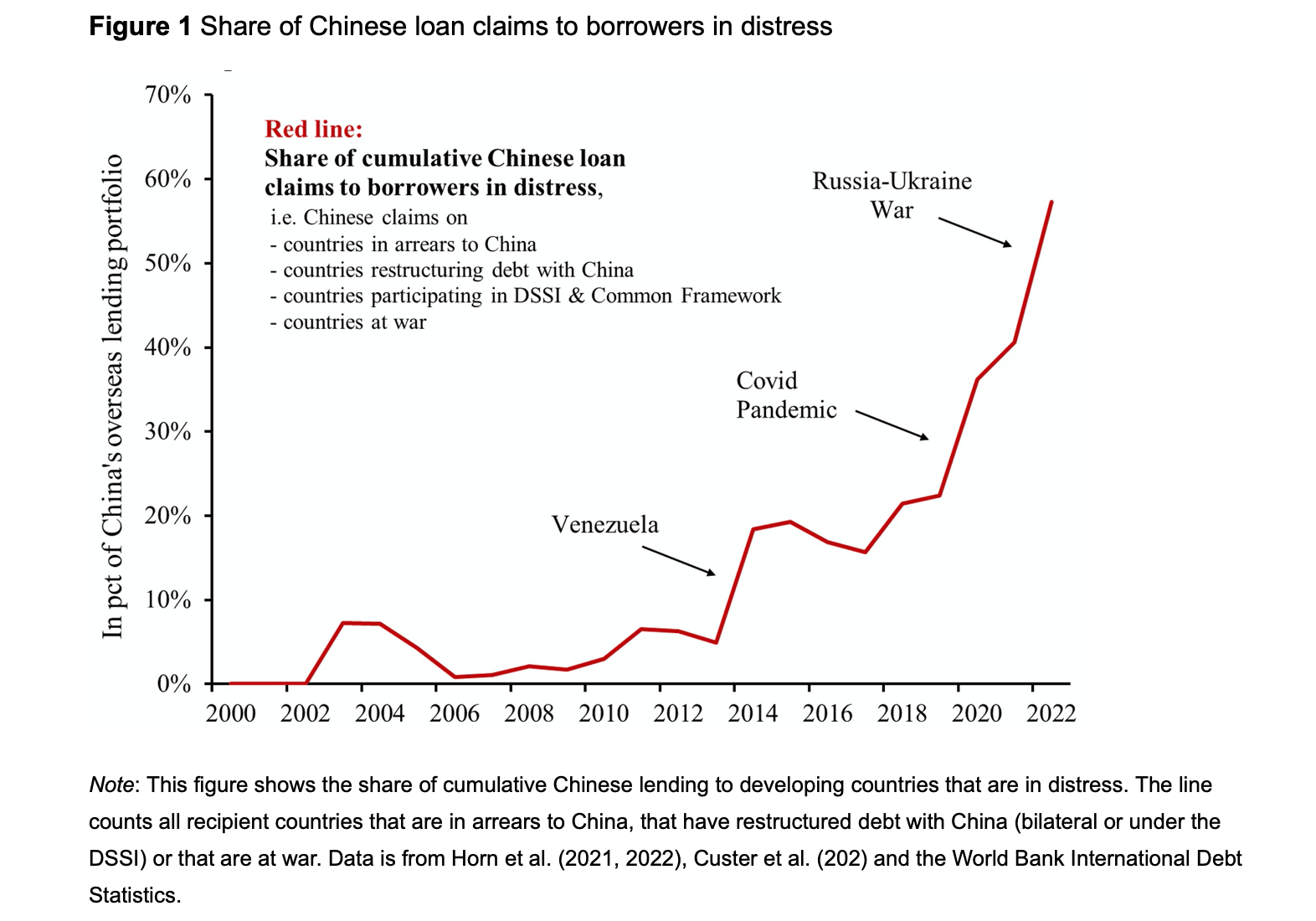 6. 40 Nations at Risk of Default and Renegotiating Under Way 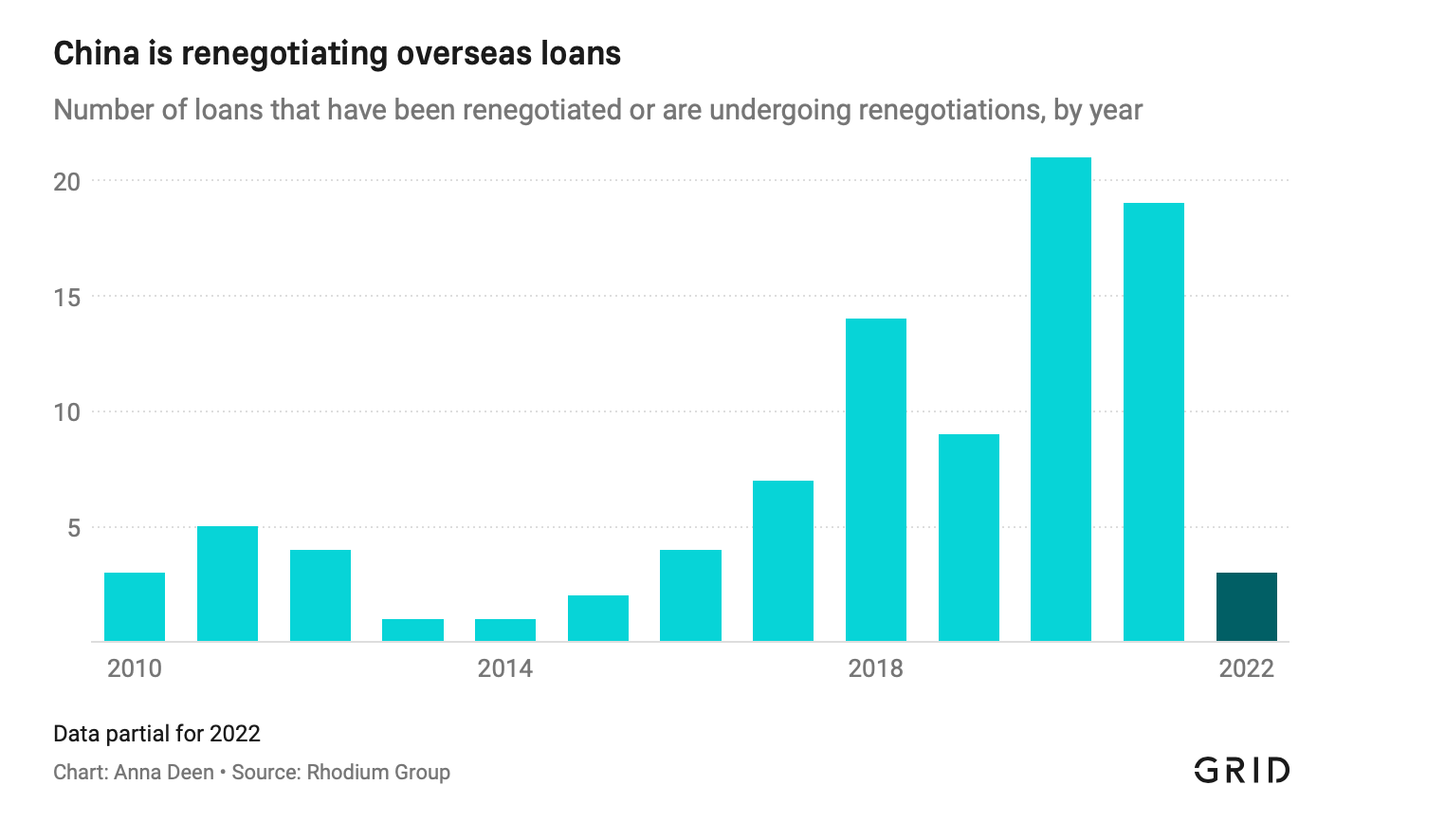 Bloomberg) — From London to Hong Kong, large initial share sales have all but dried up across the world’s major financial centers this year. But the market in China is bustling with activity.

Initial public offerings on mainland exchanges have climbed to $57.8 billion so far in 2022, the largest ever for such a period, according to data compiled by Bloomberg. There have been five IPOs of above $1 billion since January, and one more is on the way. That’s versus just one such sale each in New York and Hong Kong, and none in London.

China’s IPO market has defied headwinds such as rising interest rates and fears of a US recession, which have brought major equity fundraising elsewhere to a virtual standstill. Offerings in the Asian economy — whose monetary policy is diverging from the Federal Reserve — are largely geared toward local investors. 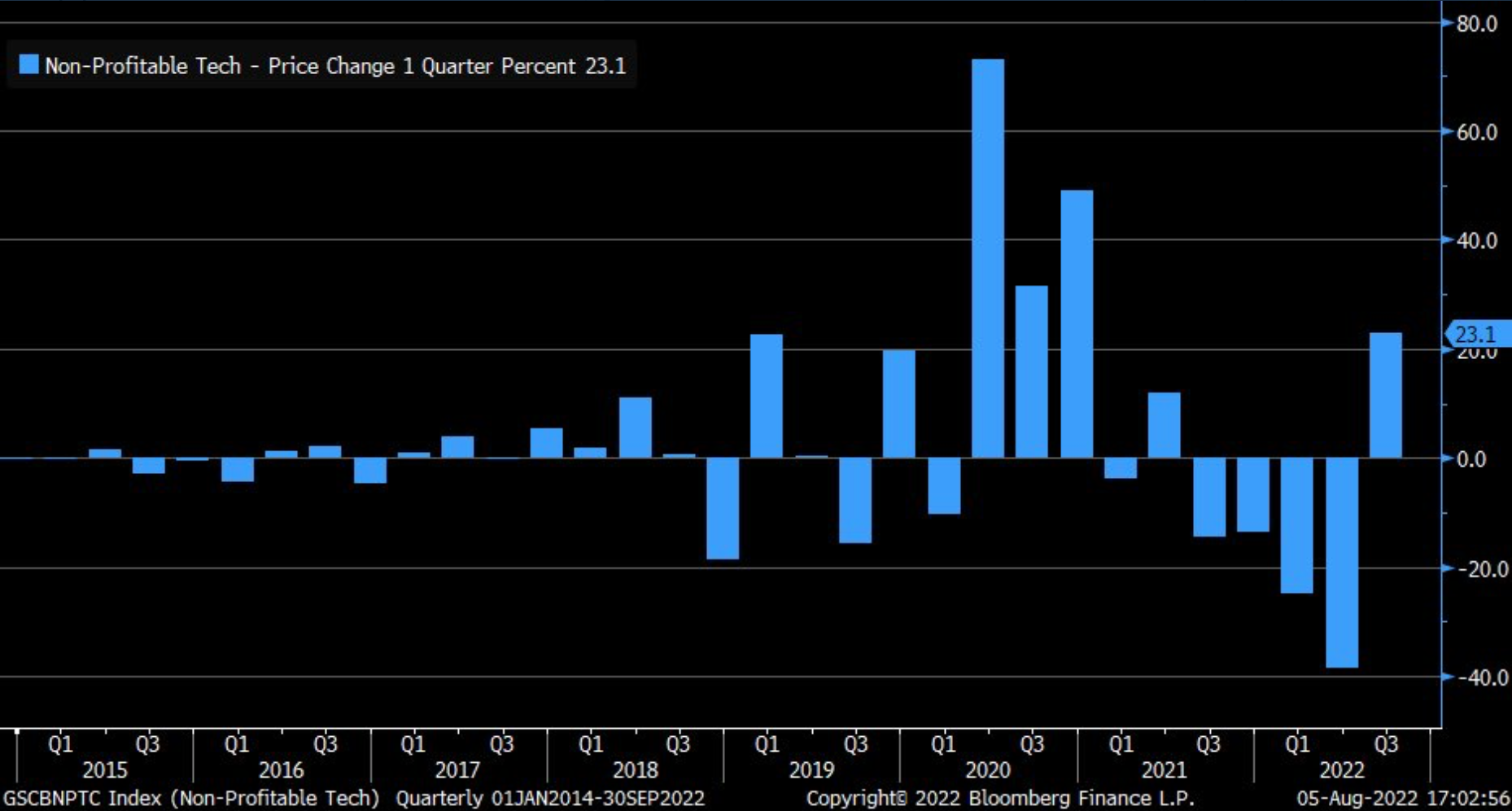 9. Which States Have the Death Penalty ?

According to the Death Penalty Information Center, capital punishment is on the books in 27 states but several don’t actually carry it out. 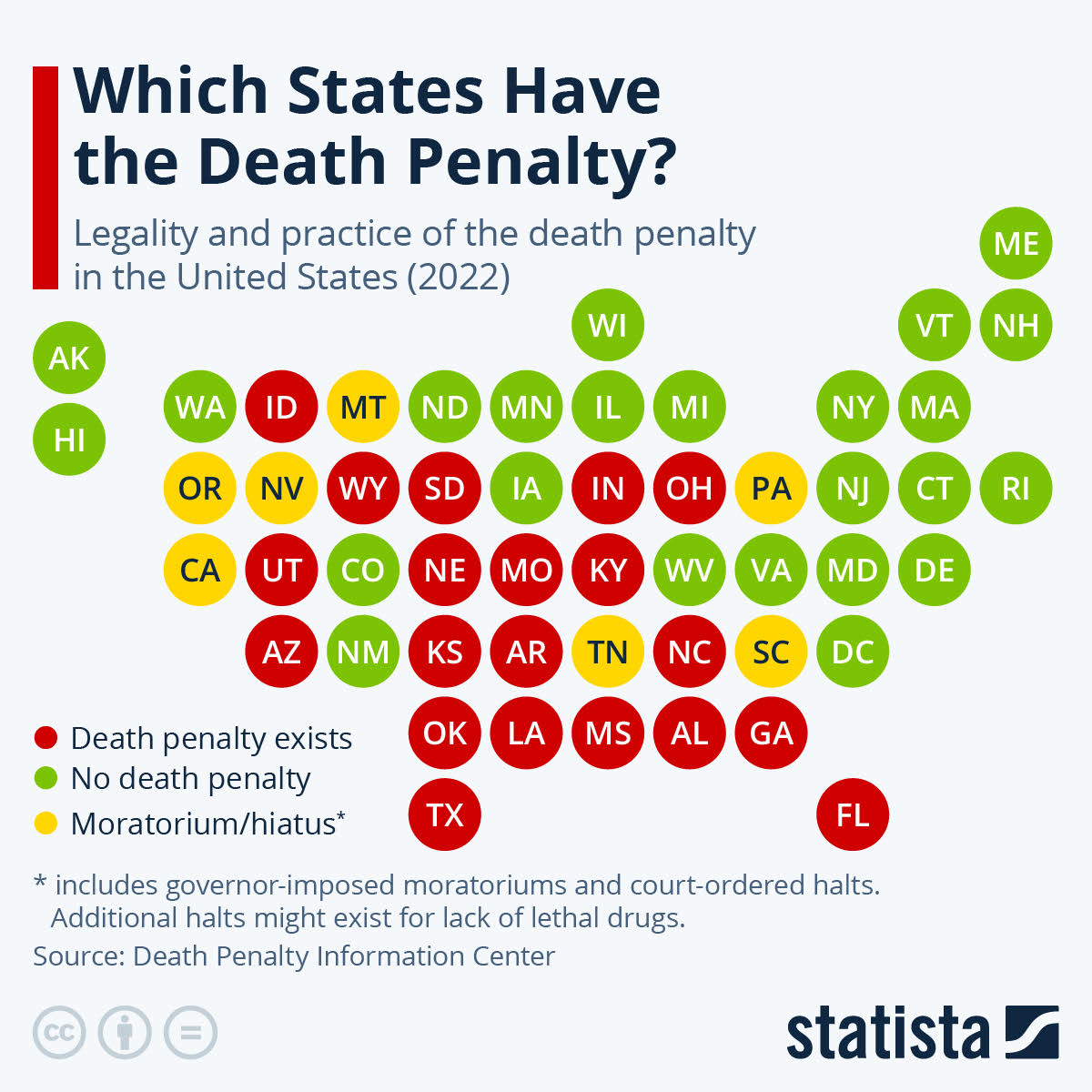 10. Be Patient and Tolerant-The Daily Stoic

There are things a leader—particularly in times of success—can get away with. There are also things that people, generally, can get away with when no one is looking, or when we think there won’t be consequences. And yet most of us don’t do these things. We try, as best we can, to observe that Stoic virtue of temperance, of moderation.

He held incredible power. His predecessors had treated the Senate and the laws as mere formalities. They treated Rome’s treasury as their personal purse. They treated other human beings as pawns to use and abuse. Imagine the discipline and rectitude it took for Marcus (a guy who didn’t even want the job in the first place), to be so strict with himself about what he would and wouldn’t do as emperor.

Now, also imagine how frustrating he must have found it to see other leaders operate with much lower standards. They had so much less power—so far from absolute—and yet it corrupted them absolutely. They had less means…and somehow more vices.

This is a common thing. You’ve probably experienced it in your own life. It’s baffling, exasperating. You tell yourself: I would never allow myself to get away with that. Then you wonder: How can they live with themselves? But be careful: this self-righteous indignation can eat you up if you’re not fully in control of it.