Deutsche shares sold off sharply in US trading. 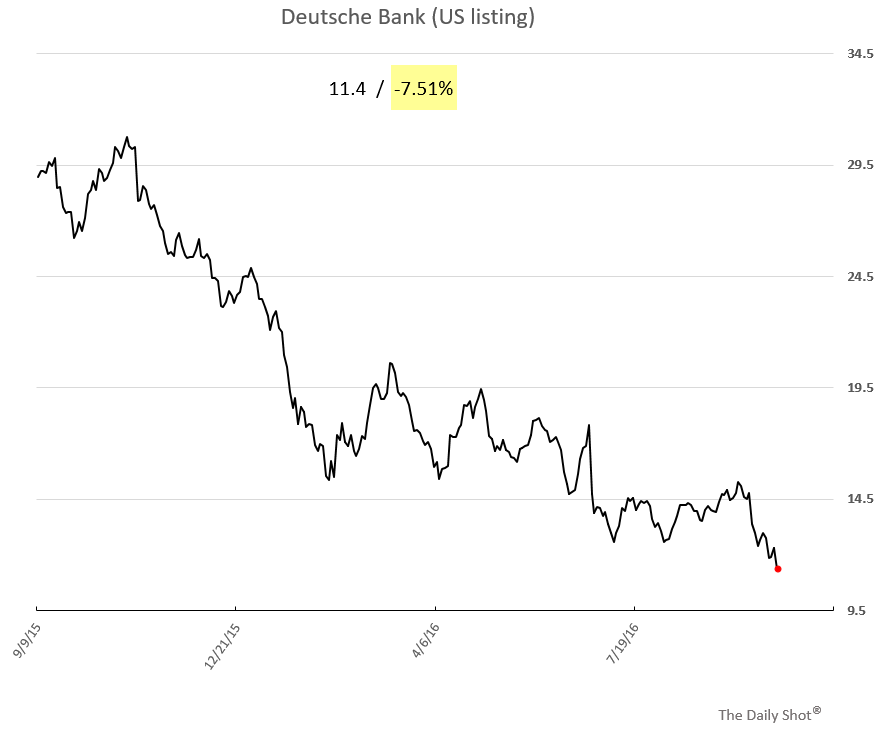 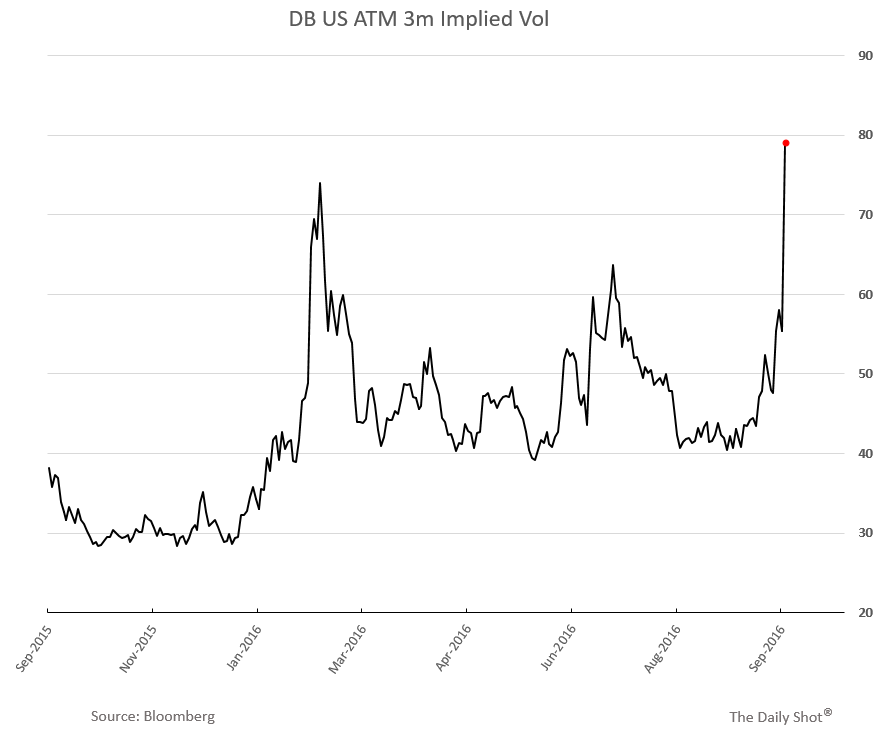 Its leverage ratio also lags its peers, meaning that the bank is more indebted than the industry average. 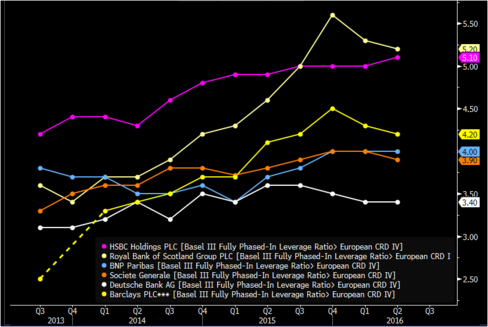 The International Monetary Fund warned in a late June report that Deutsche Bank appears to be “the most important net contributor to systemic risks” among Global Systemically Important Banks, followed by HSBC Holdings Plc and Credit Suisse Group AG. 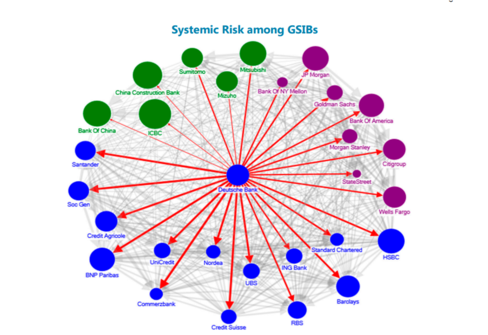 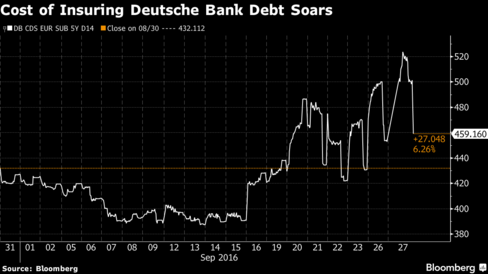 5.The Big Problem with DB….This is Happening just as Investment Banks Most Profitable Clients -Hedge Funds are Facing the Biggest Shakeout in History, so it’s A Huge Double Whammy.  We went from 500 Hedge Funds to 10,000 and the Reversion to the Mean is Underway.

Bloomberg recently reported that the Blackstone Alternative Multi-Manager Fund (BXMMX), a mutual fund run by the Blackstone Group (BX) that allocates money to hedge funds, has lost almost half of its assets so far in March.

Clients withdrew nearly $600 million, leaving the fund with slightly more than $600 million in assets remaining. That includes big redemptions by Fidelity Investments, which invested $950 million in the fund three years ago.

In the third quarter of 2015, hedge funds, as a category, were experiencing their worst quarter of flows since the bottom of the financial crisis six years before. There were an avalanche of stories about the industry’s nearly systematic underperformance. It looked and felt like an inflection point.

At the time, I asked aloud whether it could mean an actual net outflow at some point — an improbable musing given the seemingly one-way stampede through the in-door. Turns out, we all underestimated what would turn into a profound sea change in investor attitudes around the country.

One by one, the public retirement systems of various states and the endowments of universities made it clear that they were rethinking hedge funds for the first time since David Swensen’s revolutionary Yale Endowment model took the world by storm. Some announced their commitment to alternatives but mentioned that they would be lightening up their exposure. Others decreed that a wholesale retreat was coming, with redemptions across the board.

And now, it appears the wave is finally crashing upon the beach.

Virtually every “name brand” hedge fund is facing redemptions to the tune of billions of dollars. The retirements of industry legends as well as the wind-down of once invincible firms make the news on a regular basis.

“I don’t believe that the hedge fund industry will go away, but in order for the very best managers to shine again in a reliable fashion, it probably needs to shrink. The good news is that this process is already underway. The bad news is that it doesn’t look pretty or feel good while in progress.”

We’re also hearing about fee cuts — both management and performance fees — something that at one time was unthinkable. Fee cuts send the wrong message to the tony investor set — it’s the equivalent of seeing Michael Kors products at TJ Maxx. To some extent, hedge fund access had always been seen as a “Giffen Good,” which economists define as an item that people consume more of as it goes up in price. “That guy charges 3 and 30 — he must be amazing! Shut up and take my money!”

Bear in mind that this is occurring during a year in which stocks are up, bonds are up, and the dreaded dispersion problem of correlated stock returns is at an ebb. The superstars with household names haven’t been immune. In fact, to some extent they’re getting it the worst. The media loves these stories and with every quarterly performance stumble, their coverage acts as an accelerant of future outflows.

There are those who say this is a cyclical thing.

The narrative goes something like this: Right now, because the Federal Reserve has suppressed the risk-free rate and juiced the returns of vanilla asset class index products, investors are prioritizing low fees and transparency. But when the cycle turns, index products will disappoint and the skill of hedge fund managers (stock selection, market-timing, risk management, etc) will once again shine through. The assets will follow performance and boomerang right back into alternatives.

I would say that there could be some truth to this. But there’s also a lot missing.

6 .Interesting Chat that I Have not Followed Before…. 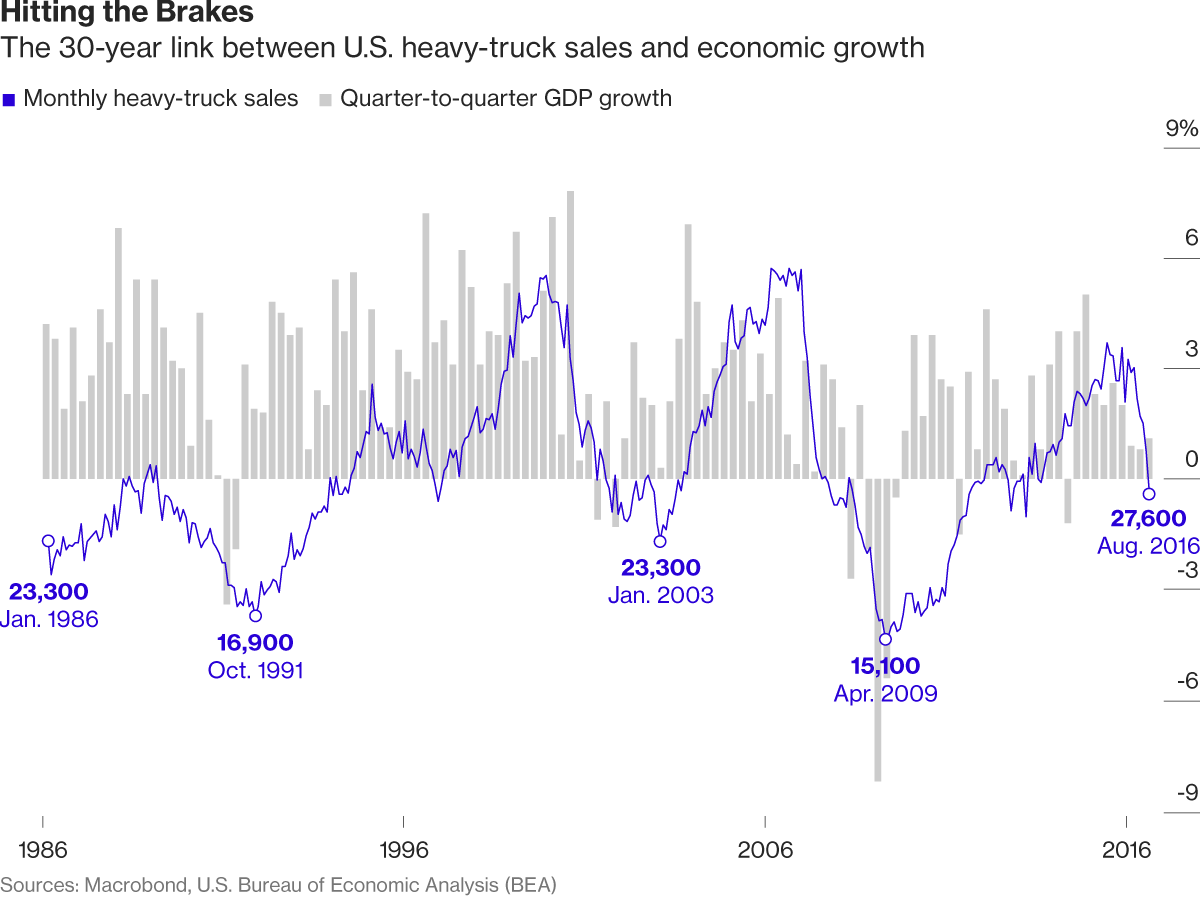 SOMETHING is amiss in global bond markets. This month, Sanofi, a French drugmaker, and Henkel, a German manufacturer of detergent, both issued bonds with a negative yield. Investors will make a guaranteed cash loss if they hold the assets to maturity. In July, Germany became the first euro-zone government to issue debt that promises to pay back to investors less than the sum it raised from them. More than a dozen rich-country sovereign bonds now have negative yields. The debt-laden are delighted with the persistence of low rates. But savers are increasingly grumpy. Economists are simply baffled. 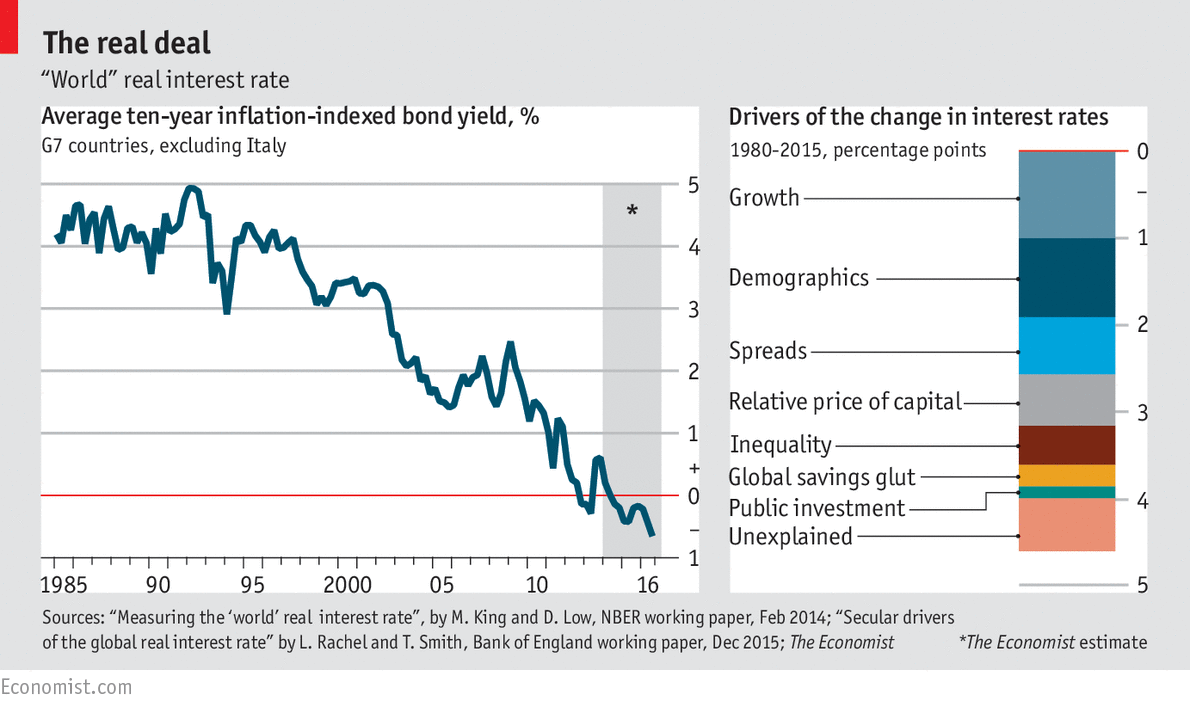 8. There is a Massive Short in Place on Corporate Bond ETFs.

Thanks to Dave Lutz at Jones 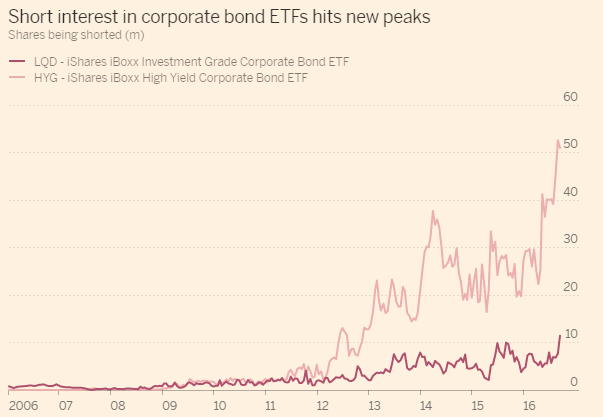 9. The Biggest Positive for U.S. Economy? 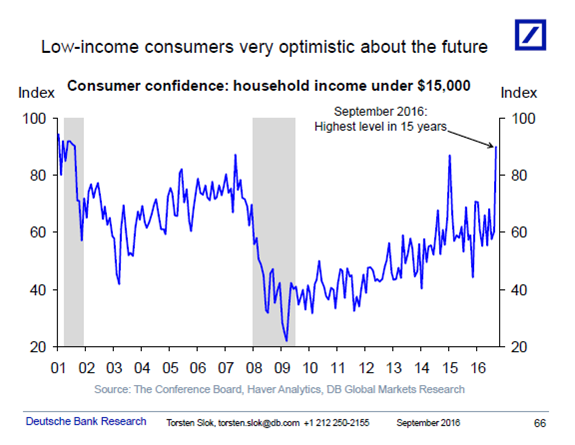 10. How to Learn and Master Any Skill Twice as Fast, According to Science 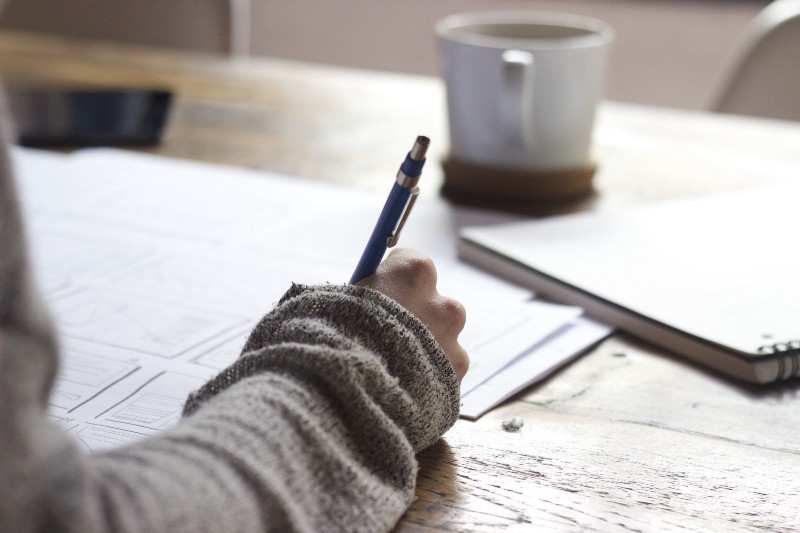 Whether you’re trying to be pro at Photoshop, or step up your tennis game, or master a dueling banjo song, you’re probably dutifully following the age-old advice that practice makes perfect.

However, contrary to popular belief, doing the same thing over and over again might not be the most efficient way to learn foreign concepts.

Traditionally, we’re taught using the “blocking” strategy. This instructs us to go over a single idea again and again (and again) until we’ve mastered it, before proceeding to the next concept. But several new neurological studies show that an up and coming learning method called “interleaving” improves our ability to retain and perform new skills over any traditional means by leaps and bounds.

What interleaving does is space out learning over a longer period of time, and it randomize the information we encounter when learning a new skill. So, for example, instead of learning one banjo chord at a time until you perfect it, you train in several at once and in shorter bursts.

Below are a some practical ways you can use interleaving to train your brain to pick up new skills quickly and effectively starting today:

Practice multiple parallel skills at once

Whether you’re trying to improve your motor skills or cognitive learning abilities, the key to transforming how your brain processes new information is to break out of the habit of learning one facet of a skill at a time. The advantage of this method is that your brain doesn’t get comfortable or store information in your short-term memory. Instead, interleaving causes your brain to intensely focus and problem solve every step of the way, resulting in information getting stored in your long-term memory instead.

For example, one study, gave a collegiate baseball team extra batting practice and broke them up into three groups: a control group, a blocked group, and a random group. The blocked group faced a variety of pitches in a set order, and the other group encountered pitches randomly. After six weeks, researchers found that the random group improved 56.7%, while the blocked group only improved 24.8%. That’s a massive difference! And similar results have been replicated in other sports and classroom learning studies.