It may have been the world’s largest IPO in two years, but shares of Postal Savings Bank of China hit the Hong Kong market like a wet firecracker after the lender raised $7.4B, but priced the deal near the bottom of its marketing range. The lukewarm start comes as investors remain cautious on the outlook for the Chinese banking industry, battling with mounting bad debts amid a slowing economy.

But only a fraction of those shares will be held by nongovernment investors, as Chinese state-run companies have already pledged to buy up most of them.

The big I.P.O. is shining a light on the practice, called cornerstone investing, of inviting big investors to buy up large chunks of shares before a company goes public. Though it is less common in other markets, it has been increasingly used by Chinese state firms going public in Hong Kong, where government-controlled companies purchase growing numbers of shares to ensure a smooth offering.

Banks tend to go along with the practice because it helps get deals done, but it has come under criticism in the past because it can give plugged-in investors preferential access to new offerings.

Shares in China’s big banks now trade at less than the reported value of their assets — a signal that investors do not believe the banks’ books or that they expect more problem loans will crop up. 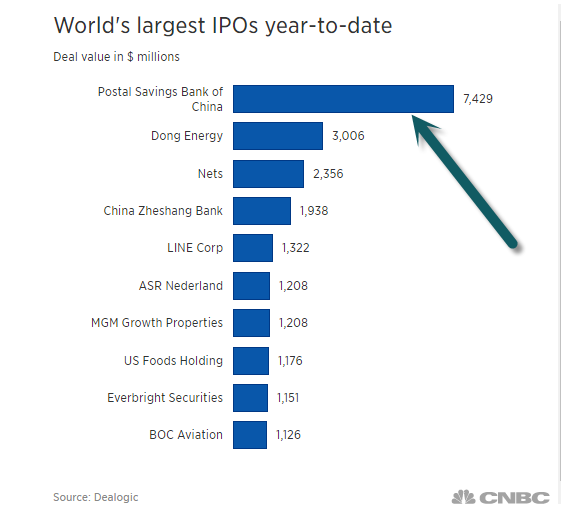 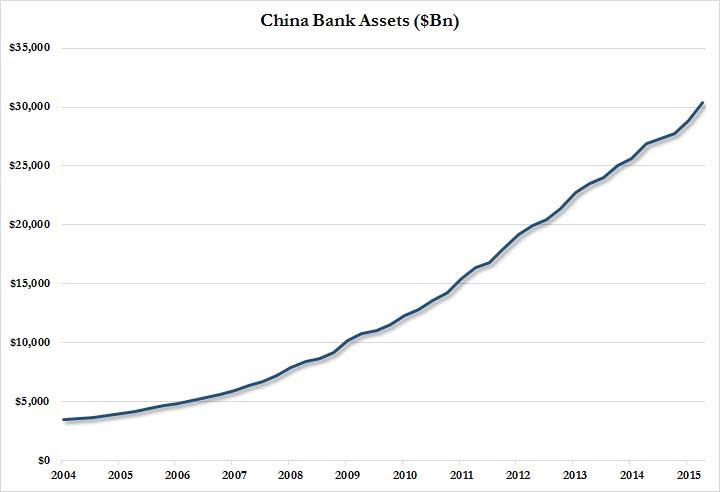 2. Corporate Debt in Asia in now Half of the Region’s Debt to GDP.

With sovereign debt relatively benign and consumer debt a mixed picture, where then is the problem in emerging Asia? The corporate sector. Corporate leverage accounts for around half of the region’s debt to GDP. Companies in China are the most extended both in absolute terms and in debt relative to GDP, which well exceeds 100%. India’s listed corporates are also highly levered with equity-to-debt ratios as high as their Chinese counterparts (see Figure 2). 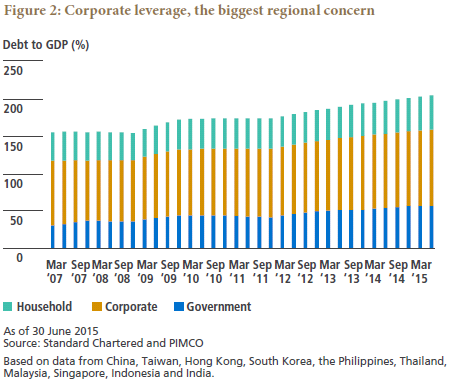 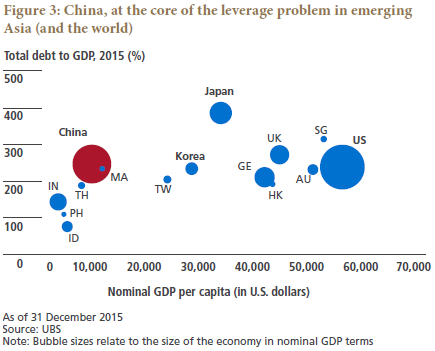 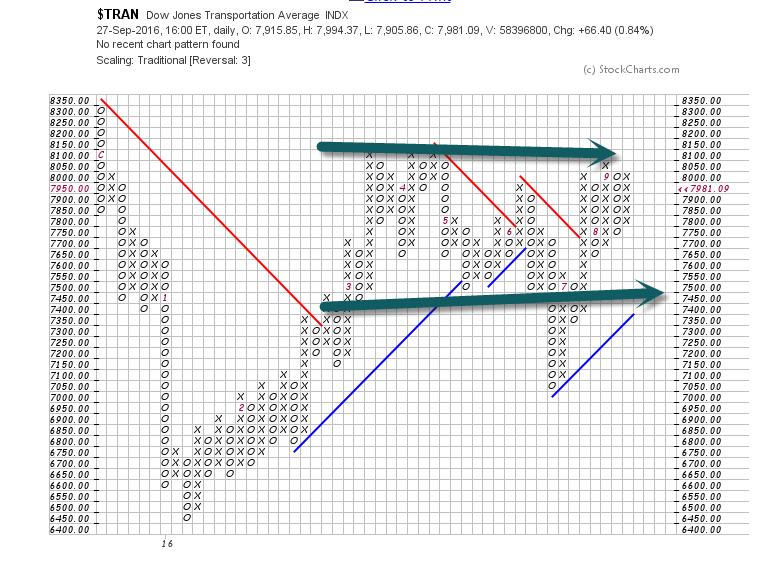 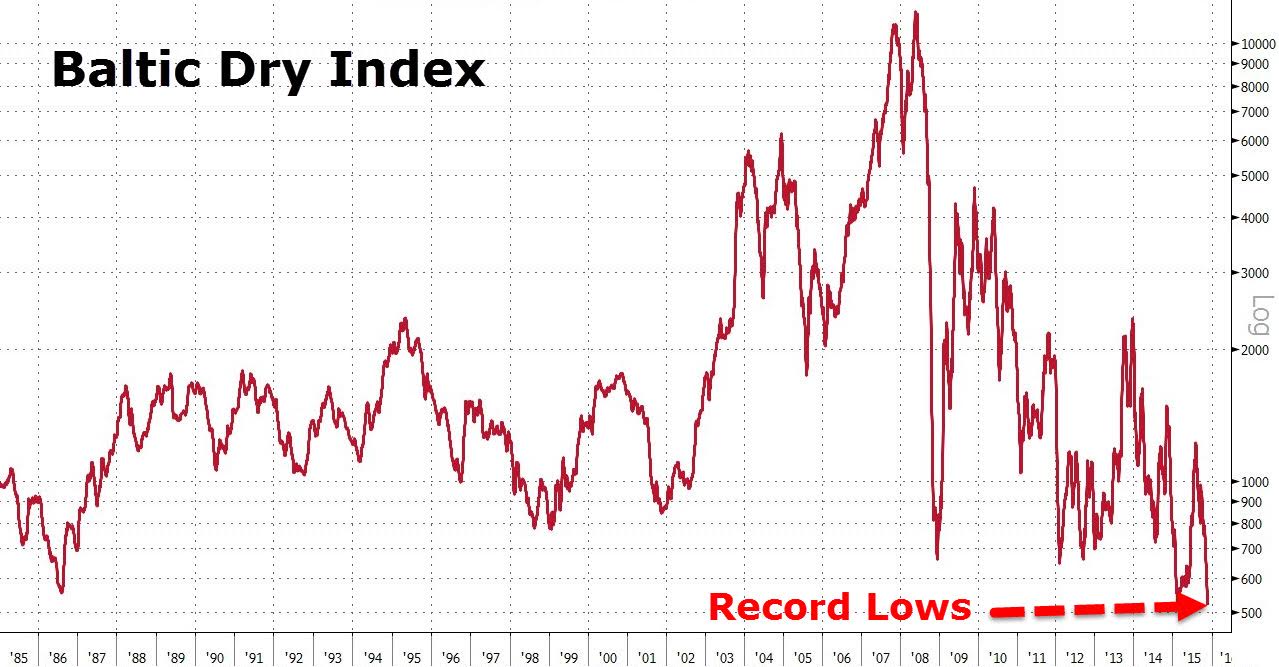 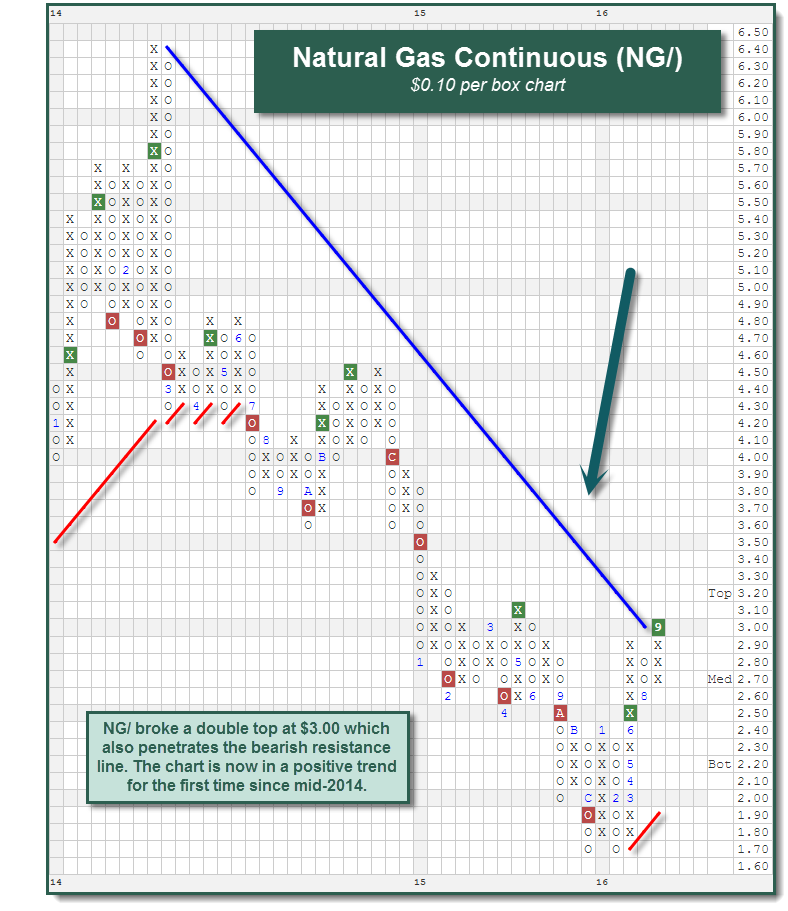 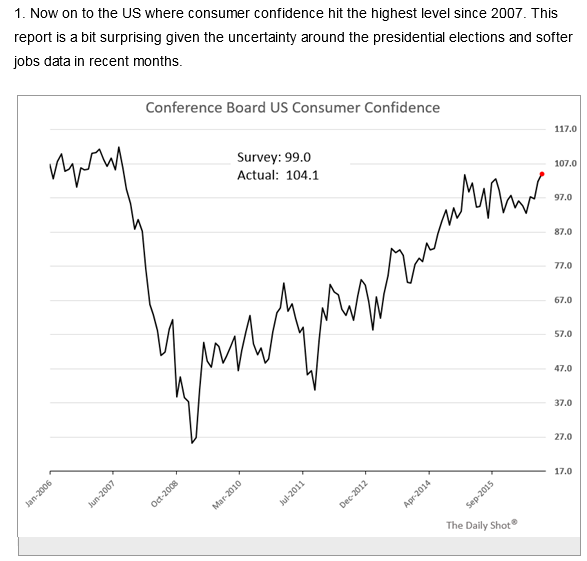 There’s a strong chance that oil may never rebound

Oil prices are hovering in the mid-$40s per barrel, and the hopes of a rebound have once again been delayed. The IEA’s September Oil Market Report predicts that the supply/demand equation might not come into balance until next year, suggesting another year of low oil prices. But what if oil prices never rebound?

The question seems ridiculous, not only because the oil markets always go through booms and busts, but also because demand continues to rise. Supplies are also falling from high cost areas, ensuring that the supply overhang will eventually be erased. Moreover, the oil industry has made unprecedented cuts in spending on exploration and development. The IEA says the industry cut spending by more than $300 billion over the past two years and a separate estimate from Wood Mackenzie expects oil and gas producers to slash about $1 trillion from spending between 2015 and 2020. Such draconian measures are surely sowing the seeds of another supply crunch, guaranteeing a price spike in the years ahead.

But the world is still oversupplied with oil, and the recent ramp up in production from OPEC could lead to low oil prices for a few years. Libya is set to bring back around 600,000 barrels per day (although those claims are questionable), and Nigeria has already returned somewhere between 200,000 and 300,000 barrels per day of interrupted supply. Production in the U.S. has also recently leveled off over the past month at 8.5 million barrels per day, after nearly 18 months of declines

The IEA expects global supplies to exceed demand through next year, and inventories to continue to build through 2017. Crude oil and refined product inventories are only slightly down from record levels, and will take a few more years to get worked through.

All of that is to say there is a good chance that ample supplies could ensure relatively low oil prices for several years, perhaps as long as towards the end of this decade.

In the meantime, alternatives will continue to make inroads into the transportation sector. Batteries for electric vehicles (EVs) continue to achieve cost declines, having fallen by 35 percent in 2015 alone. Bloomberg New Energy Finance sees EVs becoming as affordable as gasoline-powered cars – on an unsubsidized basis – as soon as the early 2020s. That could erase about 2 million barrels per day of oil demand by 2023. Given that the global surplus in crude oil over the past two years was only a little more than 2 million barrels per day at its worst point, which was enough to cause a meltdown in oil prices, the displacement of 2 mb/d from EVs in six years is a big, big deal.

Huge Run Up in Investment Leading to Oversupply 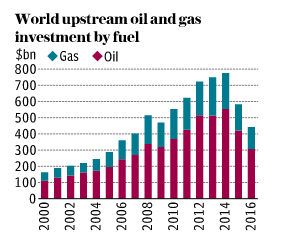 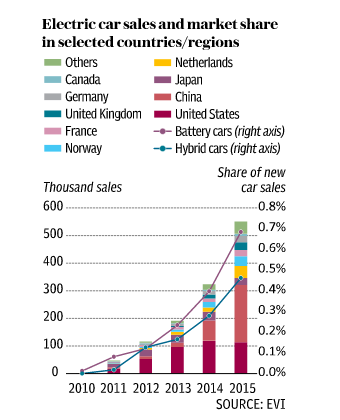 8. Read of the Day….Gasoline Sales Per Capita -18%…Fuel Efficiency, Urbanization, Working from Home and Demographics.

The next chart adjusts the 12-month MA of sales volume for population growth based on the monthly data for Civilian Non-Institutional Population over age 16 from the Bureau of Labor Statistics, via the St. Louis FRED repository. What we see here is that gasoline sales on a per-capita basis are 5.4% lower than at the end of the Great Recession. The gallons-per-capita series includes the complete EIA data, but since we’re using the 12-month MA, the blue line starts in 1984. We see the double peak in March 1989 (the all-time high) and August 1990. The latest per-capita daily average is 18.9% below the 1989 high but off the -22.2% interim low set in September 2014. 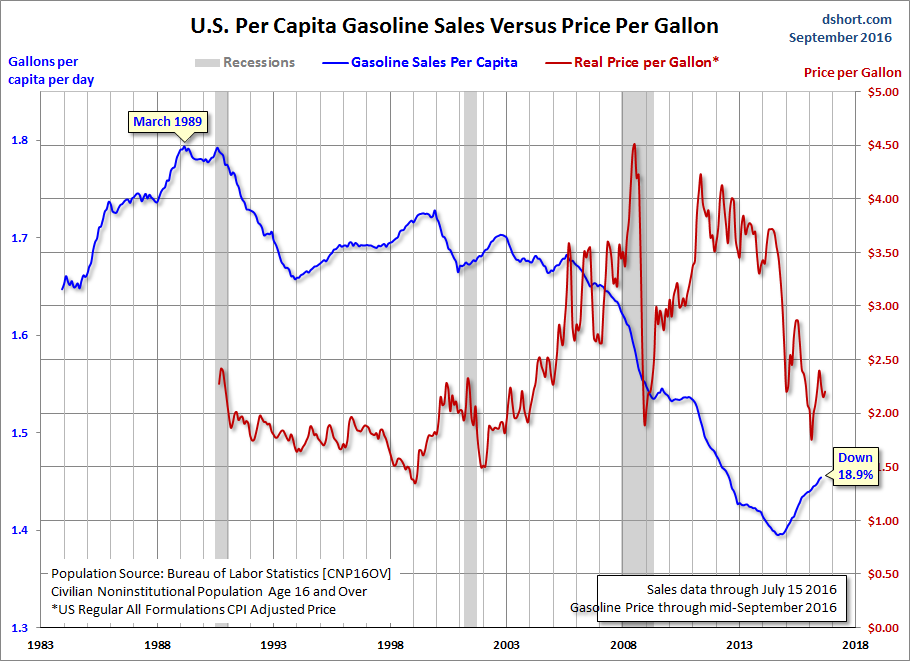 What does this analysis suggest about the state of the economy? From an official standpoint, the Great Recession ended 84 months before the most recent gasoline sales monthly data point. But if we want a simple confirmation that the economy has recovered to full growth, gasoline sales continues to be the wrong place to look.

In addition to improvements in fuel efficiency, declines in gasoline consumption can be attributable in large part to some powerful secular changes in US demographics and cultural in general:

As we’ve continued to observe in this monthly update, we are living in interesting times.

Housing price increases took a breather last month but the 5% year-over-year growth is pricing many people out of the market. 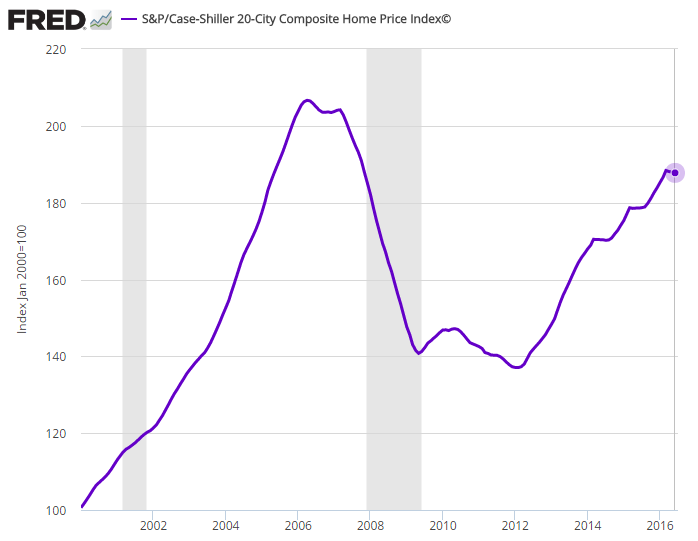 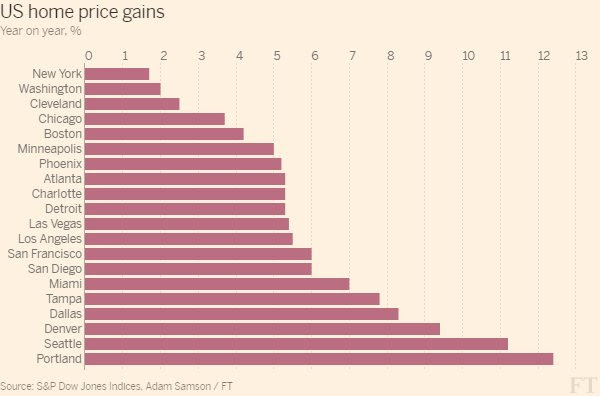 10. How to Never Quit Learning Something New

Learning something new is never easy.

We’re often comfortable with what we already know, and entering the unknown can make many of us feel uncertainty, whether we’re learning a new language, new sport, or activity.

But with the right resources, anyone of us can learn something new without quitting ever again. This is what we call overcoming “The Dip.”

Bestselling author and entrepreneur, Seth Godin shares when is the right time to quit something versus when we should persist. In his book, he talks about the most common reasons why most people quit before they reach their full potential, which can be very useful to know before it happens to you. 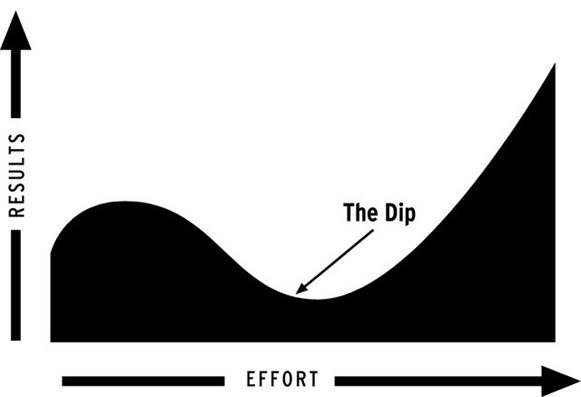 According to Godin, these are the five reasons why you might fail to overcome “The Dip.”

You can apply these reasons to common situations, including learning a new language, starting your own business, or getting in shape.

As you follow the progression of the cycle one goes through while learning something new, you can see that the “Crisis” mode is the most significant, as it can lead to one of 3 moves:

As we continue our learning journey, “The Dip” is something we will continuously face. The faster we can get ourselves out of “Crisis” mode, and into “Transformation” mode will determine the potential of the talent we can reach at the skill.

How To Make It Stick When We Learn Something New

You can have all the resources and skills in the world, but they’re not much without the right mindset.

Carol Dweck, who’s the bestselling author of Mindset, talks about what’s known as the Growth Mindset.

According to Dweck, humans can have one of two mindsets: Growth mindset or Fixed mindset. She differentiates the two here:

A “fixed mindset” assumes that our character, intelligence, and creative ability are static givens which we can’t change in any meaningful way, and success is the affirmation of that inherent intelligence, an assessment of how those givens measure up against an equally fixed standard; striving for success and avoiding failure at all costs become a way of maintaining the sense of being smart or skilled.

A “growth mindset,” on the other hand, thrives on challenge and sees failure not as evidence of un-intelligence but as a heartening springboard for growth and for stretching our existing abilities. 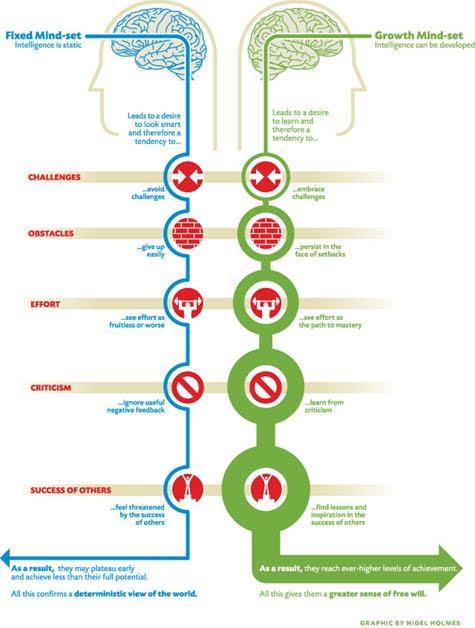 If you’re thinking about quitting or giving up, remember that you’re undergoing a process of growing, and struggle is part of the path to mastery.

Figure Out How You Learn Best

Some of us learn better by listening to an audio recording, while others would be bored out of their minds.

Studies have shown that there are seven main learning styles:

It’s safe to assume that the way you are learning today may not be your ideal way of learning, and that you should experiment for yourself what your best style of learning is.

For example, if you’re an adult, there’s exciting research that shows adults can be as good, if not better, than children at learning a language. This depends on the right learning method of adults, whether they use immersion versus memorization, and their ability to continue learning. One of the key explanations for this is that adults have more experience than children at understanding how we best learn something new, versus children who are only figuring it out.

Figure out how you learn best by recalling the moments when you retained the most information from a learning session, while experimenting and analyzing new styles of learning moving forward.

Think about how you learned how to ride a bicycle, swim at the pool, or learn your first language. You learned it by doing.

As we shared in our post on how to remember more, a study done by the National Training Laboratories Institute revealed that:

Give yourself the best shot at learning faster and retaining more skill/information by completely immersing yourself in the activity, instead of relying on theory (i.e. books, videos, courses).

If you’re learning a foreign language, speak it with other native speakers.

If you’re learning how to program, learn it by creating your own website.

As for next steps, pick something that you’ve been wanting to learn. Then refer to the 3 steps we shared in this post: