“I know nobody knows
Where it comes and where it goes

The next big worries putting pressure on the markets are the presidential election and the inevitable rise in interest rates. Some would argue that these headwinds are ultimately linked by politics. Although Republican nominee Trump may be the most unpredictable wildcard of all-time, we know from past letters pertaining to short-term volatility that “You got to lose to know how to win…” as legendary Aerosmith lead singer, Steven Tyler, would wail.

Rewind the clock about 250 years. Even then, our country’s Founding Fathers were planning for elections involving candidates much worse than the Donald and Hillary when they set up the checks and balances system of this great republic.

We expect a lot of media coverage, dissection and bar talk after Monday’s debate, followed by market volatility. But, let’s stay disciplined and look at history through the lens of our two apparent market threats—elections and rising interest rates. Both threats will certainly cause short-term instability, but they won’t be enough to change the business cycle dramatically in the near term. Remember, bear markets are caused by three things: recessions, global conflicts, and credit bubbles–not Presidential elections. But, that will be the topic for another letter.

There have been eight rate hike cycles going back to 1976 in which the Fed raised rates a minimum of 3 successive FOMC meetings[HB1] .  The shortest cycle was nine months and the longest cycle was 39 months.

If you held a diversified portfolio consisting of 30 percent U.S. stocks (i.e. S&P 500), 30 percent global stocks (i.e. MSCI) and 40 percent Barclays AGG aggregate bonds you would have earned 8 percent [HB2] annualized on average during the aforementioned cycles. Of the eight rising rate periods since 1976, there has never been an instance in which a diversified portfolio producing a negative return—that’s right never.

Here is a look at how the major asset classes performed during those cycles: 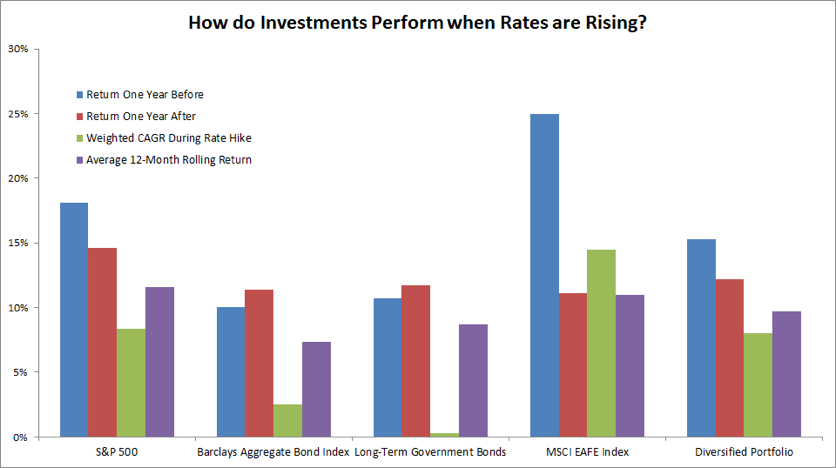 Avoid making short-term based decisions on current events. You should be intellectually focused on the presidential elections, but we would not recommend making investment conclusions based on your favorite party or candidate.

According to Stock Trader’s Almanac, since 1833, the Dow Jones industrial Average has gained an average of 10.4 percent in the year before a presidential election, and nearly 6 percent, on average, during the actual election year. By contrast, the first and second years of a president’s term tend to be less robust: 2.5 percent and 4.2 percent, respectively. A notable recent exception was the election year 2008 coinciding with the global financial crisis. That’s when the Dow sank nearly 34 percent. (NOTE: Returns are based on price only and exclude dividends.)

As you can see in the chart below, one-year lagged returns for the two major parties are almost identical. 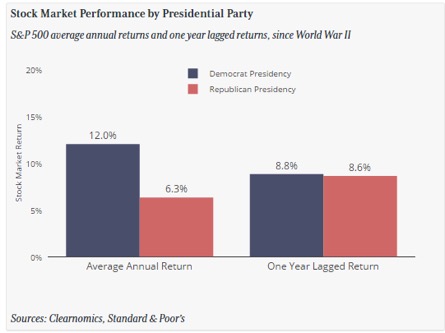 Here is an image of the the Presidential cycle, an imminent threat is not supported by historical data. 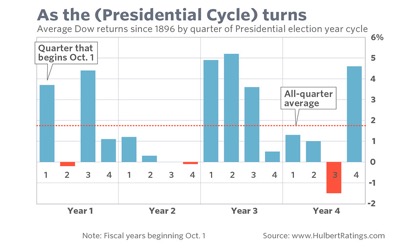 As most of you know, we encourage intellectual engagement. The upcoming election and the interest rate cycle are certainly worthy of your attention and due diligence but we would not recommend making major portfolio decisions around “what if” scenarios. Let’s stay focused on a potential bear market caused by global conflict, recession or credit bubbles. Almost everything else is just short-term noise.

We are more concerned about the Deutsche Bank crisis right now that we are about the Trump vs. Hillary debates. A collapse of the venerable German banking behemoth would cause unknown ripples throughout the global economy. But for now, we stay the course.