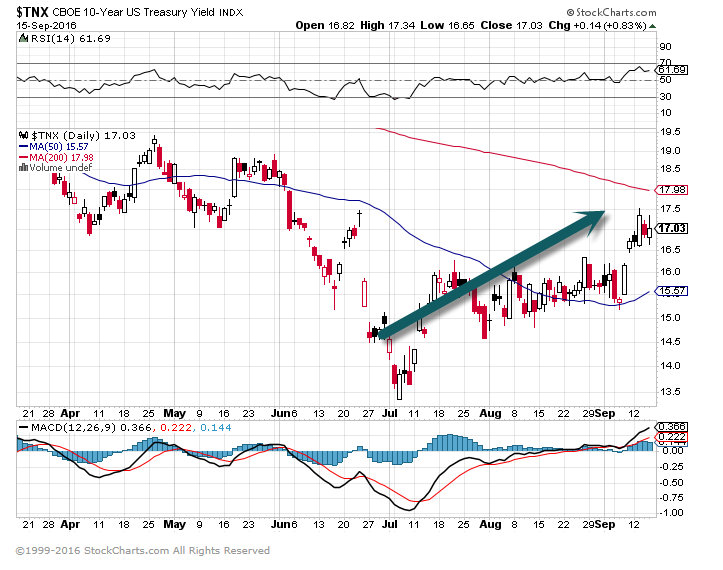 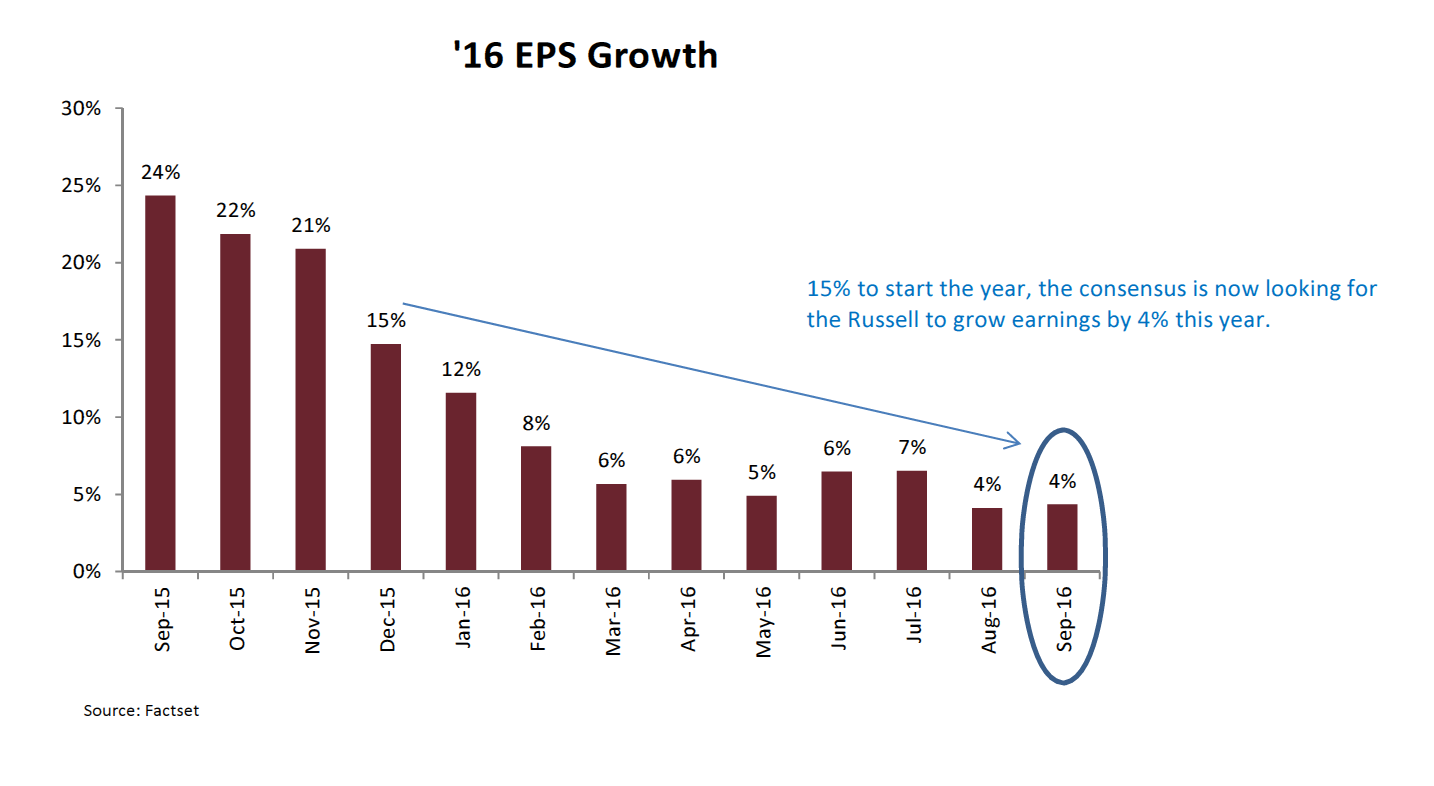 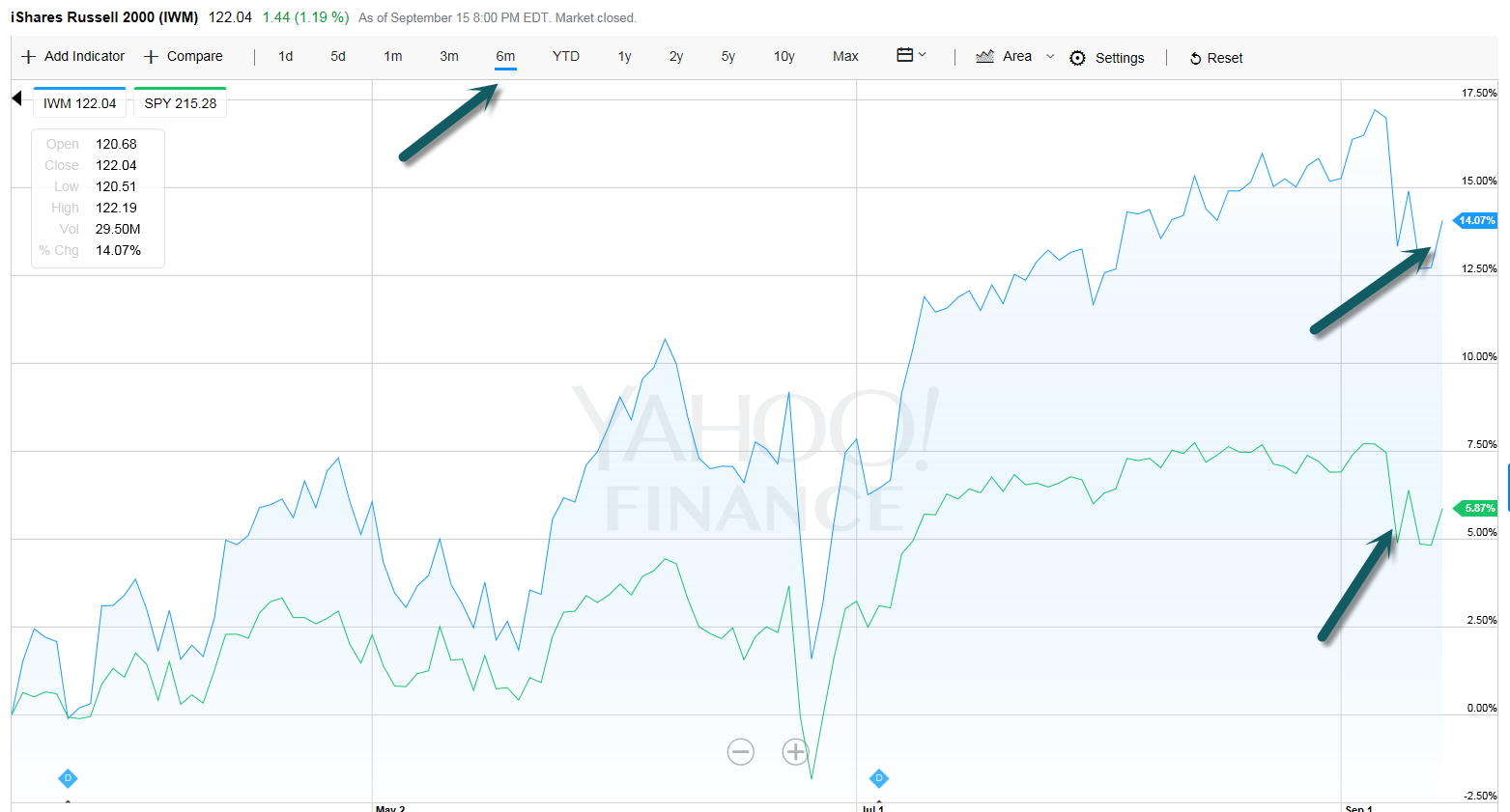 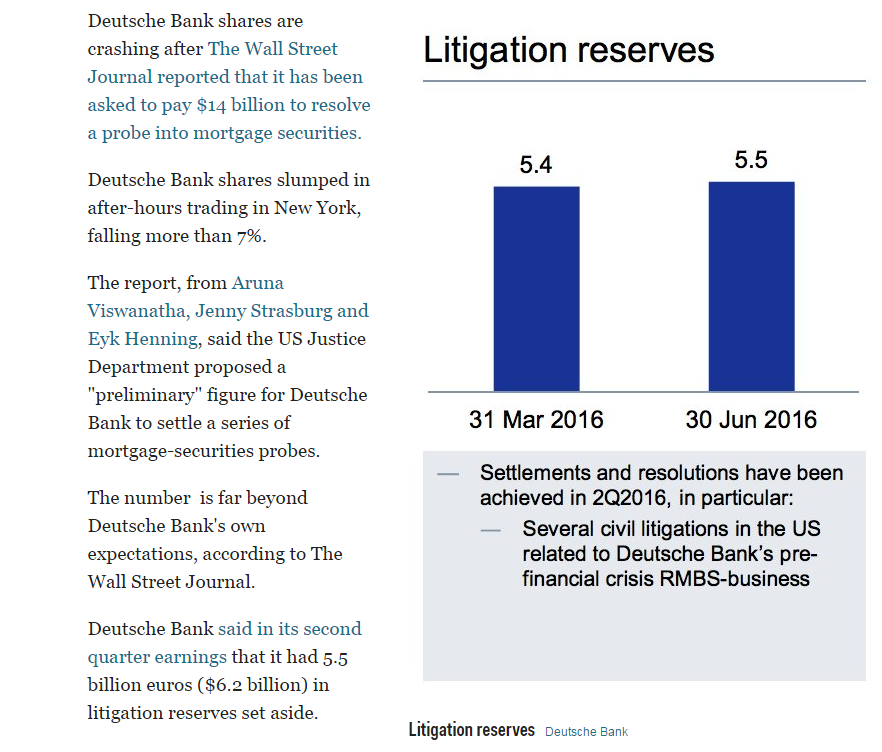 Jeff Gundlach has $10 Watch Number on Stock…..See if it Holds Two Previous Lows in July/Aug. 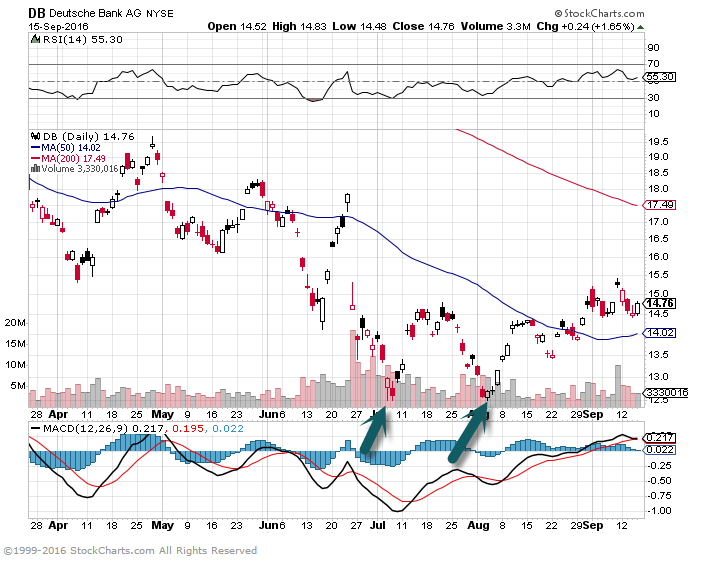 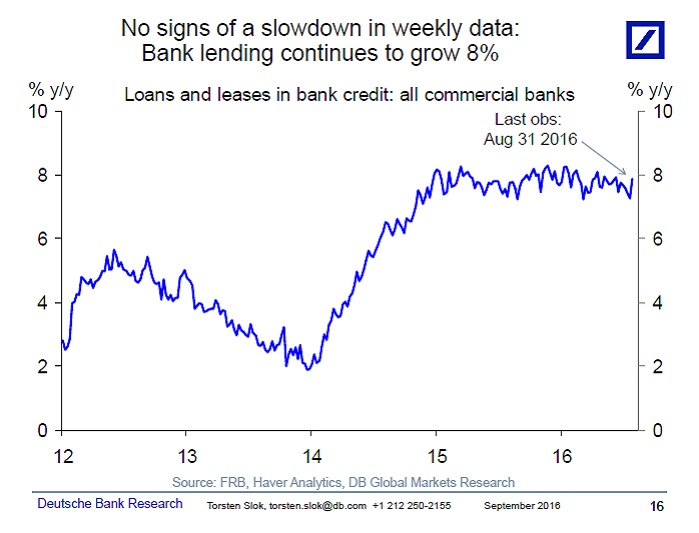 As the retail investor moves to passive, it will be interesting to understand margin debt as indicator.

Margin Debt
A contrarian sentiment indicator that has flagged three major market tops since the 1970s.The year-over-year percentage change in margin debt can help flag major tops in bull markets. This contrarian sentiment indicator will exceed 55% when optimism runs rampant on Wall Street and investors are heavily borrowing money during the late stages of a bull market. 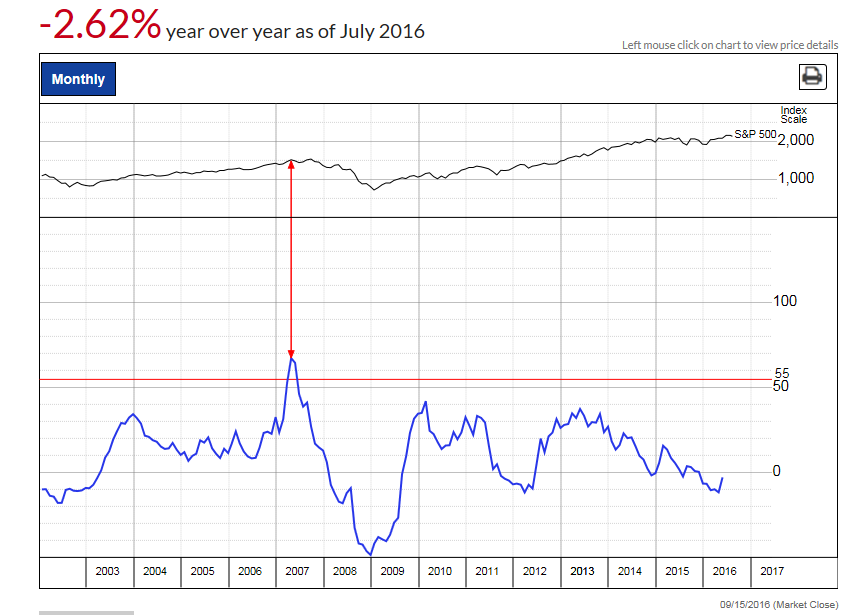 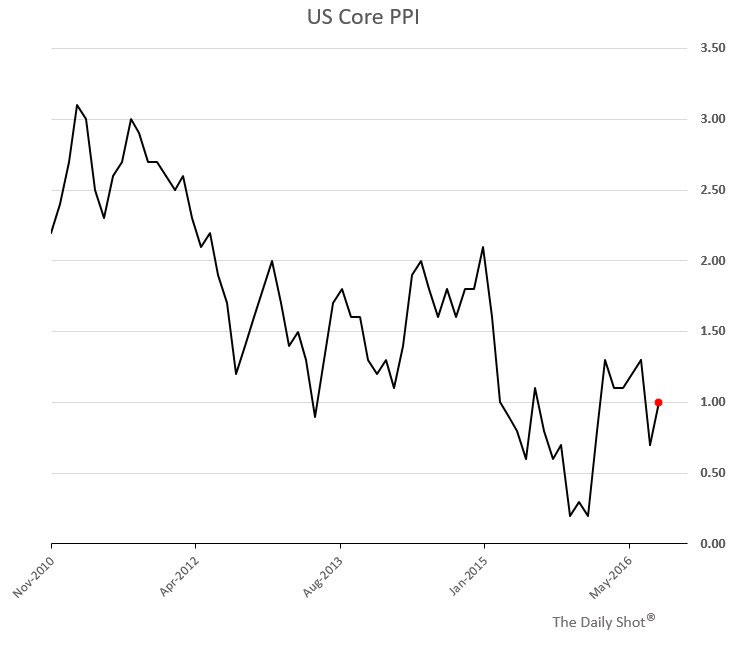 Speaking of inflation, FT Alphaville published an article suggesting that most of US inflation since 1992 came from the “least productive sectors”: healthcare, housing, education, and prescription drugs. 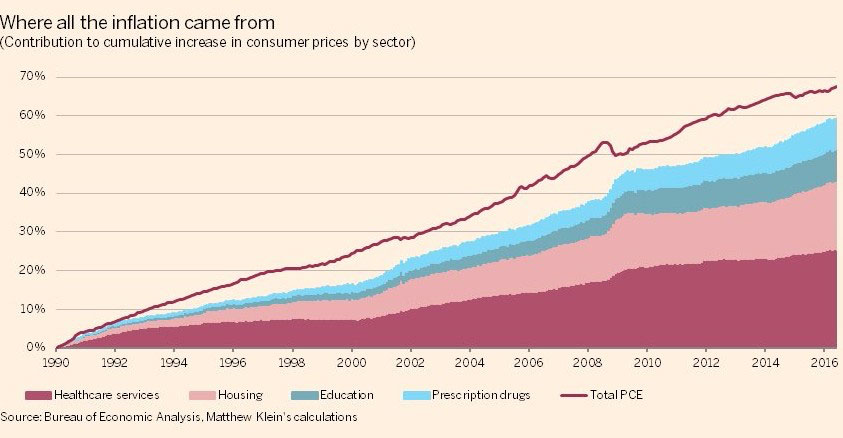 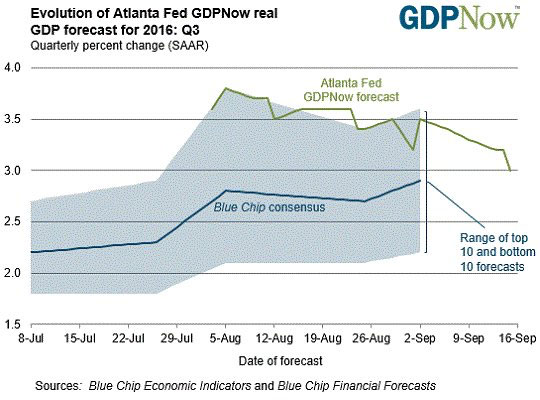 Charts from the Daily Shot.

7. Trump’s Odds Hit the Highest Level Since He Announced Candidacy.

Trump Over the Hump

Sep 15, 2016
Earlier this week, we published a post discussing the recent trends in betting markets for the fall election and how Republican candidate Donald Trump was seeing quite a resurgence in his odds from the lows in early August.  We also noted that every time Trump’s odds approached similar levels in the past, something would happen on the campaign trail, causing his odds to quickly revert back.  In many ways, Trump’s odds of winning the election and the ‘resistance’ at around 30% was reminiscent of the S&P 500’s battle to break out above 2,100 in 2015 and early 2016.  While stocks eventually broke through resistance, the question in the political markets on Monday was, could Trump get over the hump?

Since that post on Monday, Trump’s chances have continued to increase and as of this morning were at 33.7%, which is the highest level he has seen since he announced his candidacy.  The odds for Trump to win in November are still only slightly better than one in three, and the betting markets haven’t always been the best predictors of actual political outcomes (Brexit vote), so Cher doesn’t have to pack her bags just yet, but the reversal of fortune in Trump’s candidacy still qualifies as a big turning point in the current election season. 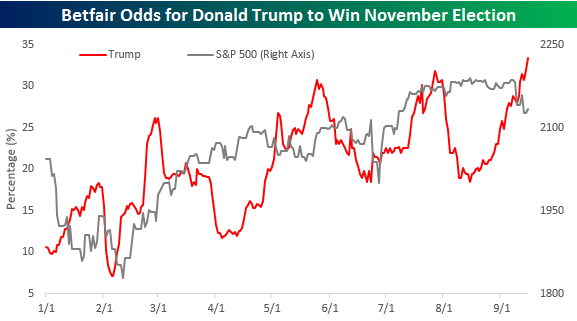 8. Fear and Greed Index (sentiment) has Come Way Down in One Month. 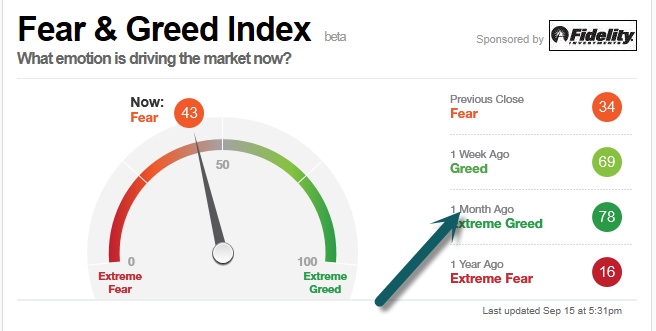 Click for full explanation of Components of Fear/Greed Index. http://money.cnn.com/data/fear-and-greed/ 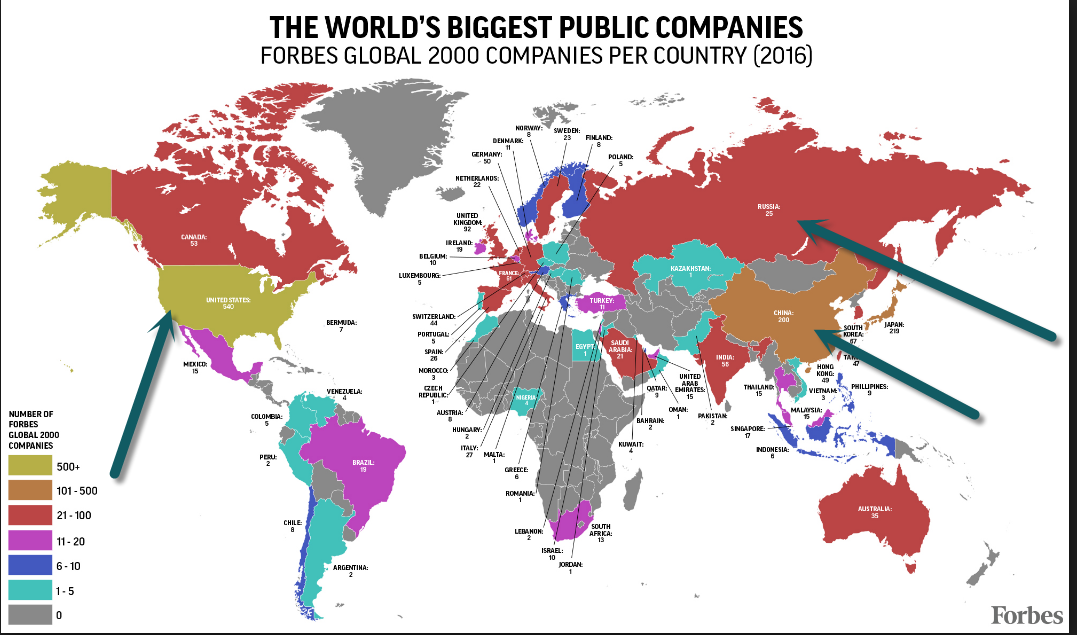 10. 8 characteristics the ‘Shark Tank’ investors have in common

There is one TV show that I watch ever week without fail. It’s “Shark Tank.” I, like millions of viewers around the world, watch each week looking for inspiration. They inspire me each week to become a better person, leader, and business owner. ABC’s hit show has truly influenced a new a generation of entrepreneurs.

The success of the men and women invested in by the sharks can be attributed to the characteristics that the “Shark Tank” team all share. Here are eight of those characteristics.

1. They’re not afraid of failure. They embrace and learn from it.

“It doesn’t matter how many times you have failed, you only have to be right once,” Mark Cuban is quoted as saying.

The “Shark Tank” team, like great entrepreneurs, realize that failure is a part of the journey. Daymond John admits he’s failed way more than he’s succeeded, but neither he nor the other sharks let failure hold them back or prevent them from achieving their dreams.

Instead, they learn from it, and use to their advantage. “All the best things that happened to me happened after I was rejected,” said Barbara Corcoran. “I knew the power of getting past no.”

Failure isn’t the end. Learn from it. I personally had to lose everything I owned to realize what I truly wanted to do. Years later, I have a successful cash company.

“Don’t wait for the ‘perfect time,'” John said. “You will wait forever. Always take advantage of the time that you’re given.” Corcoran adds, “If you have an idea, immediately move on it. Start that fire and get it burning immediately … it’s everything.”

And, thanks to technology, it’s easier than ever to act on your idea.

3. They always find solutions to problems.

“As an entrepreneur, you can always find a solution if you try hard enough,” says Lori Greiner. That’s a mentality and characteristic that she shares with the rest of her colleagues on the show.

“Don’t start a business. Find a problem, solve a problem. The business comes second,” suggests Robert Herjavec. Remember this when writing your business plan. John explains, “Every problem can be solved as long as they use common sense and apply the right research and techniques.”

4. They work hard and play hard.

Cuban has famously said, “Work like there is someone working 24 hours a day to take it all away from you.” Grenier adds that, “entrepreneurs are willing to work 80 hours a week to avoid working 40 hours per week.”

Related: Work-Hard, Play-Hard Types are Real: 3 Ways to Recruit and Keep Them

While there’s no denying that the “Shark Tank” team works their backsides off, they also know how to let loose and have fun. Corcoran has said, “I built the business exactly the way my mother built and ran her family. I wanted a replication of the big, happy family I grew up in. I wanted happy people having fun.”

Herjavec adds, “Work hard. Have fun. Be nice. Play fair. Dream big. We only get one chance at this life. If you’re going to play this game, play it to win.”

Cuban knows how important it is to have a little fun in the workplace. “Keep a pulse on the stress levels and accomplishments of your people and reward them,” he says. “My first company, MicroSolutions — when we had a record sales month or someone did something special, I would walk around handing out $100 bills to salespeople.”

5. They surround themselves with the right people.

Entrepreneurs realize the importance of not only hiring the right employees, but also finding the right partners and investors. As John has said, “Align yourself with the right people, forge the right relationships, and you’ll set yourself up for the long run.”

Corcoran agrees. “Make sure you pick good people to build your business with, as they’ll determine 80% of your success. The best people are honest and have lots of enthusiasm. Don’t worry too much about their level of experience when you’re interviewing, as the right attitude always delivers much more than just experience.”

“My partners taught me that in order to create wealth, I needed to pair up with people whose strengths compensated for my weaknesses,” says Kevin O’Leary.

“No balls, no babies. Once you are prepared and you think you have every angle of preparation covered, you have to go for it,” Cuban has bluntly stated.

But while entrepreneurs are risk-takers, the most successful entrepreneurs realize that these aren’t impulsive decisions. O’Leary has said, “I like to take risks. That’s how I make money. But they are calculated risks.”

A similar sentiment was echoed by Herjavec. “Be risky at work. Be safe with your investments.”

7. They trust their instincts.

Instinct is a lifesaving characteristic for both sharks and entrepreneurs. We’ve all experienced those times when we ignored our gut and made either a poor decision or didn’t jump on an opportunity. While listening to your instincts can be easy, successful entrepreneurs have learned how master this art so that it benefits them and their business.

While entrepreneurs and sharks are able to listen to their instincts, they’re also aware of the power of education and learning. “What does it take to be a successful entrepreneur? It takes willingness to learn, to be able to focus, to absorb information, and to always realize that business is a 24/7 job where someone is always out there to kick your ass,” says Cuban.

John believes that he would have been more successful if he were more knowledgeable about the business world. “No matter what business you’re in, business is business, and financing and money are critical. I would have made a lot fewer mistakes if I had more schooling in that area.”