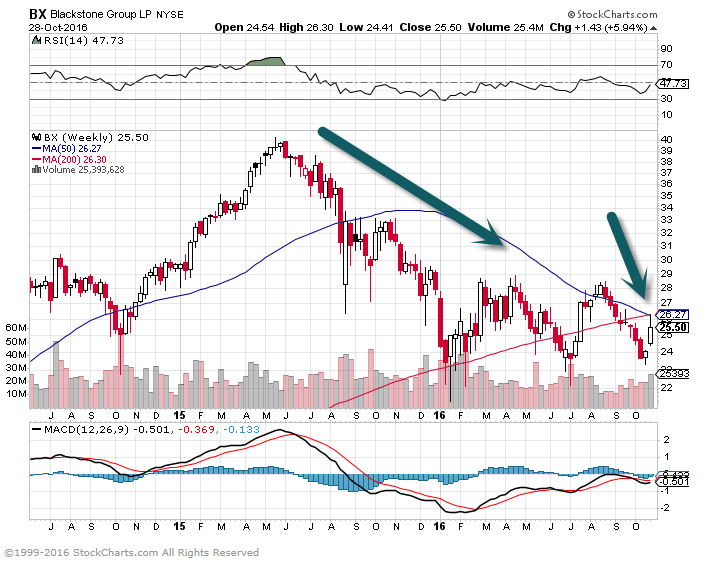 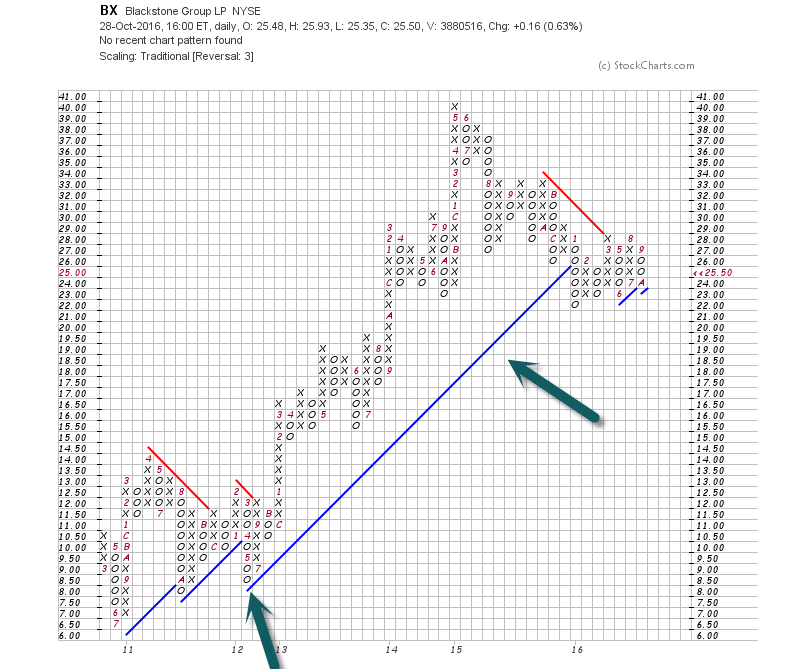 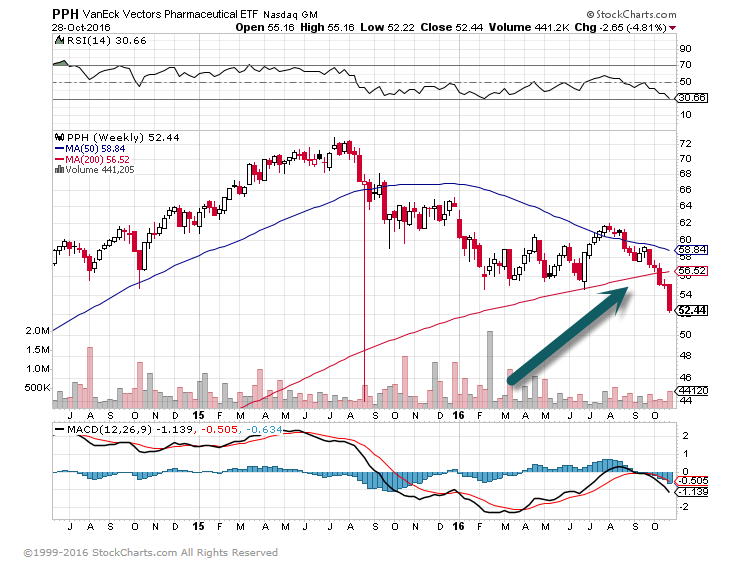 PPH-How much is priced in?? 26% off highs…Still well above blue uptrend line going back to 2010…Can the President trump aging demographics? 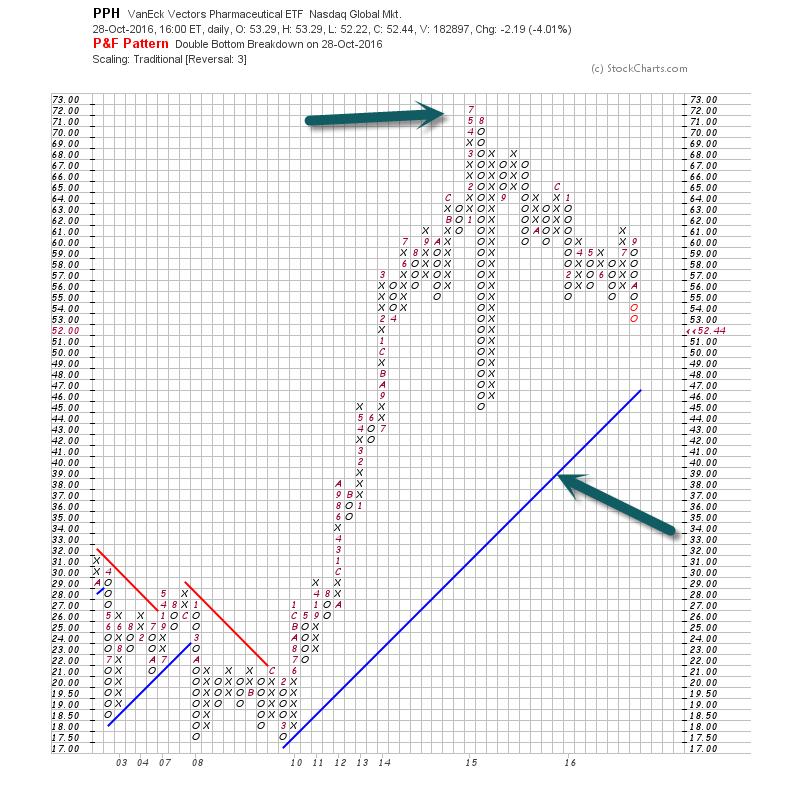 BBH Biotech ETF—Even with 30% Correction…The ETF is holding above red 200day for third time this year. 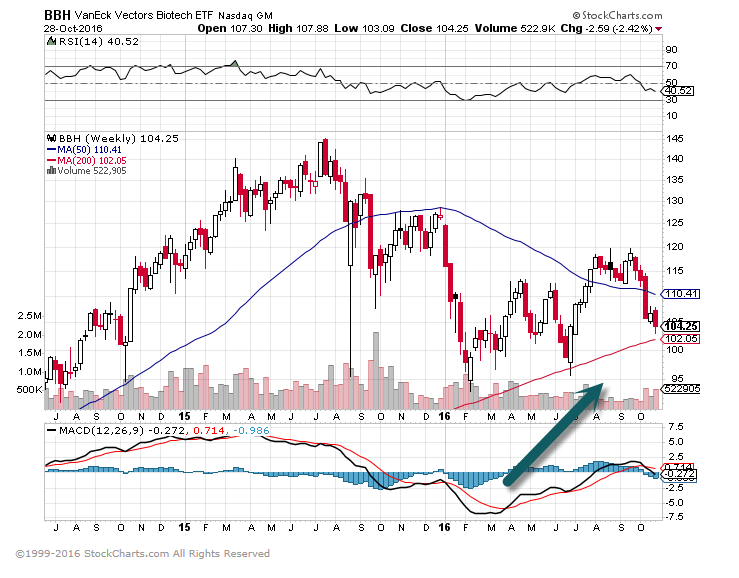 3. Banks are Having Another Run on Interest Rates Rising…Let’s See if they Break Out of this 5 Year Box. 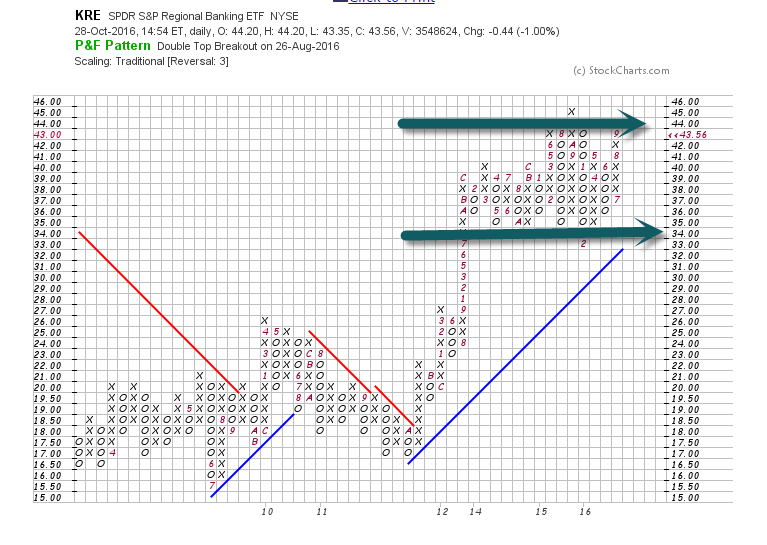 Investors pour $1.1bn into inflation-protected bond funds – The inflow is the second-largest since the start of 2007, according to EPFR 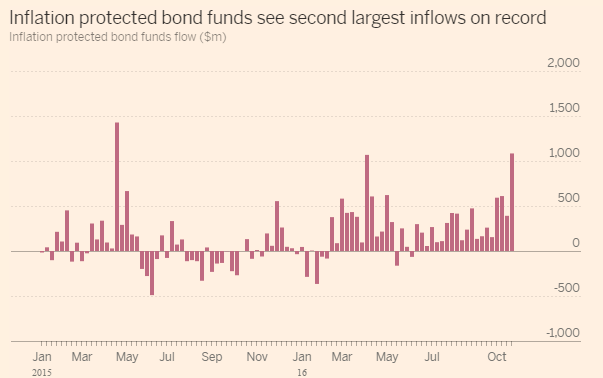 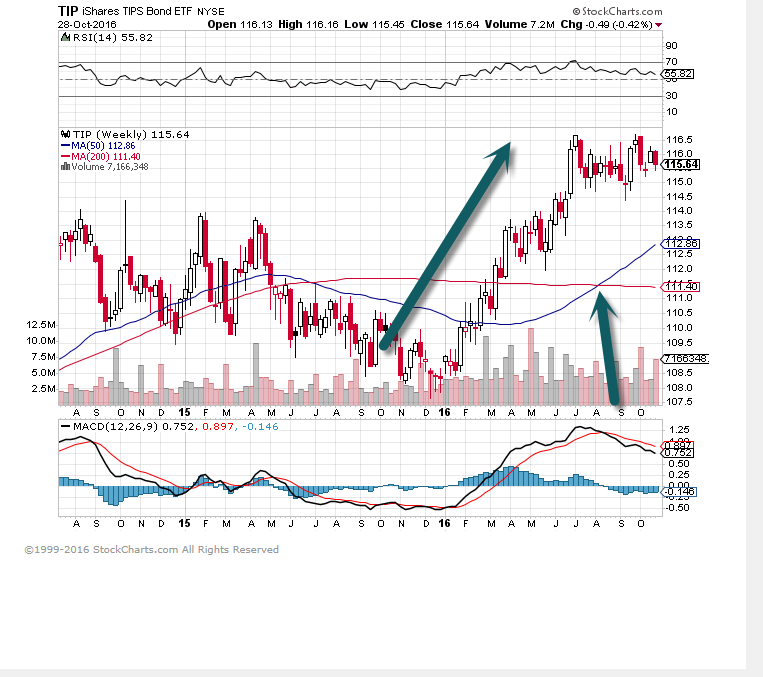 5. EU Central Bank Enacted Zero Interest Rates and $1Trillion in Quantitative Easing with One Goal—Spark Inflation.  Is it Finally Working?

On a year-to-year basis core consumer prices grew by 0.8%, against a forecast of 0.8%, and a previous reading of the same number.

Core prices are an important measure because they strip out the most volatile items — things like fuel and food prices, which are subject to massive variations.

Here’s the chart showing that breakdown: 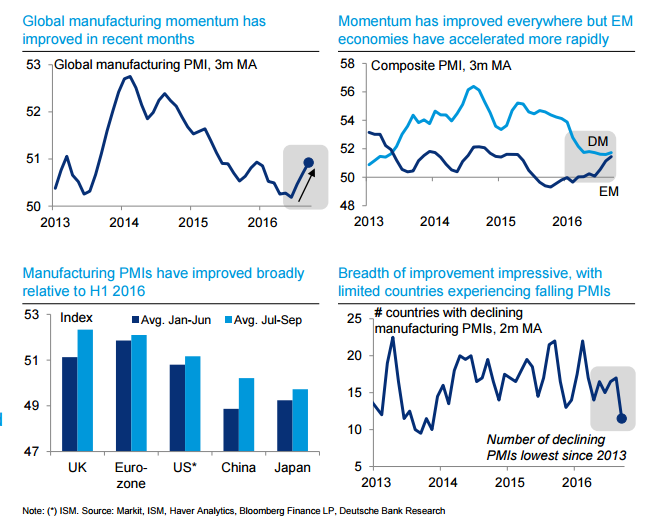 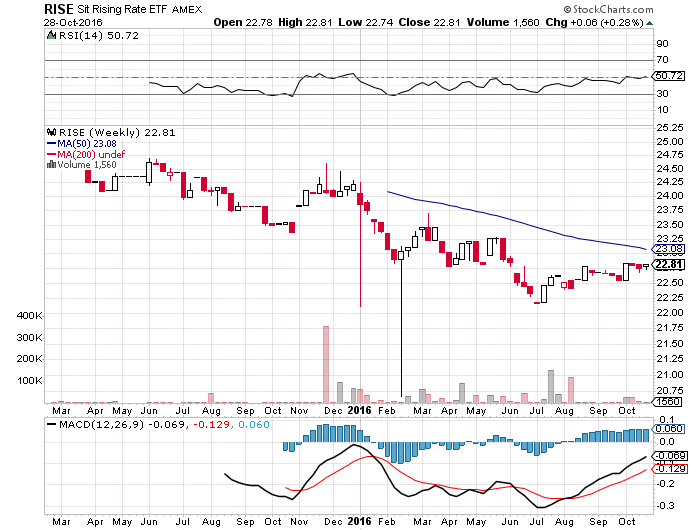 RISE is a strategic interest rate-hedging tool that gives investors the opportunity to benefit from the rise in the interest rates of U.S. Treasury notes. The portfolio targets a negative 10-year duration using futures and options on 2, 5 and 10-year maturity Treasury futures contracts.

Early this year, China’s decision to reform its massive coal-mining industry lit a match under the depressed market, cutting output and lifting prices around the world.

However, higher coal prices have backfired in China. As winter approaches, the government is worried that utilities won’t have enough supply. Inflation is another problem, as surging coal prices trickle down to electricity bills for households and factories. “It’s a source of concern for them now,” says Tom Price, a commodity analyst with Morgan Stanley.

In recent weeks, the NDRC has convened state-run coal producers and removed some of the supply constraints, stoking fears that increased production will cause prices to fall again. China’s coal imports fell in September from a month earlier. And in the futures market, Newcastle coal prices are deeply backwardated, with the fourth-quarter contract for 2017 trading at $70 per ton, a 30% discount compared with the spot market. That suggests the market expects lower prices in the future. “The concern is that this price rally isn’t going to be sustainable, because China may just as easily reverse its mandate to cut production,” says Andrew Moore, managing editor of Platts Coal Trader.

Those worries will keep a lid on prices near term, but some analysts are more optimistic about coal’s long-term outlook, betting that the Chinese government will have to consolidate its fragmented and inefficient coal industry—which currently accounts for half of the global supply. “This is such a huge industry that the NDRC has no choice but to return to carrying out the reform program through 2017, and maybe into 2018,” says Price. 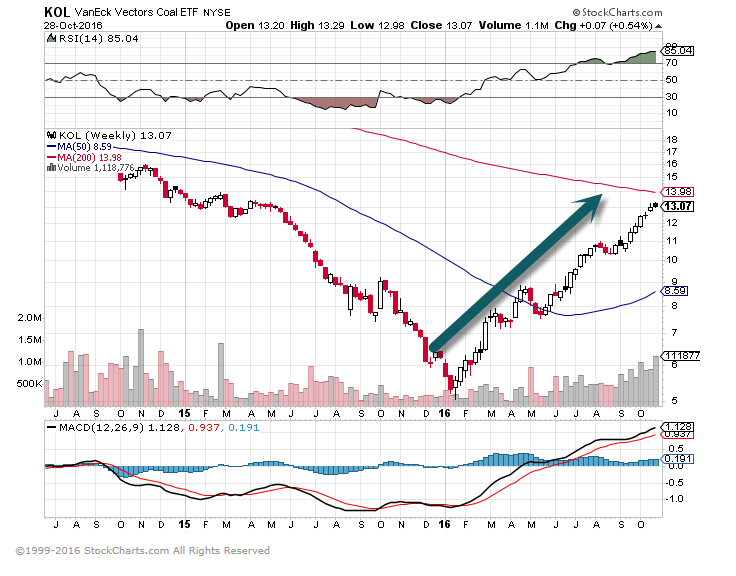 8. Sector Performance Off Feb. Lows…Is this Telling Us a Story for 2017 Leadership?

Below are three charts highlighting sector performance so far in 2016.  The first shows year-to-date performance, where you can see that Health Care has been the clear laggard with a decline of 5.55%.  Real Estate is the only other sector that’s down year-to-date, while Utilities, Technology, and Energy are all up more than 10%. 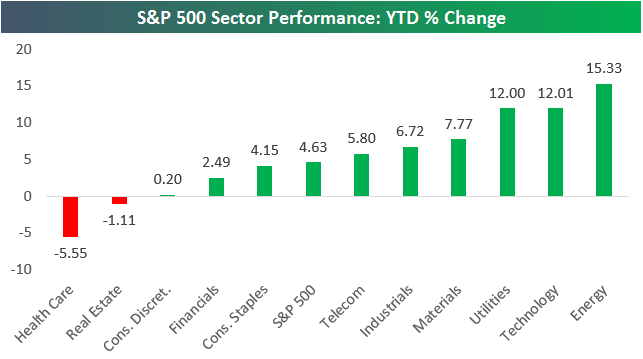 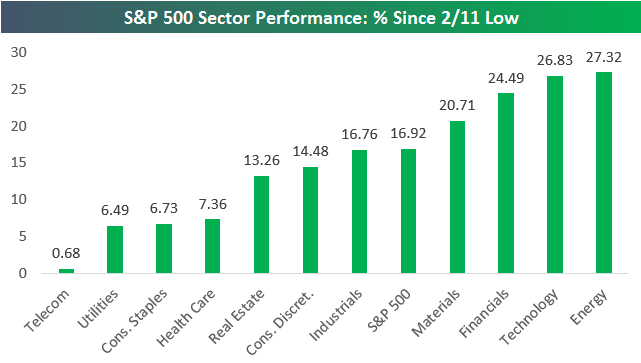 Our final chart shows sector performance since the S&P 500 made its year-to-date (and all-time) high on August 15th.  As shown, the S&P as a whole is down 2.36%, but eight of eleven sectors are down more than that, which shows how weak breadth has been.  If it weren’t for Tech, Financials, and Energy posting gains over this time period, the S&P would be down a lot more.  Tech is by far the biggest sector of the market with a weighting of 21%, and its gain of 2.84% since 8/15 is what has kept the market from completely breaking down.  The biggest areas of weakness have been Health Care, Real Estate, and Telecom, which are all down more than 9%. 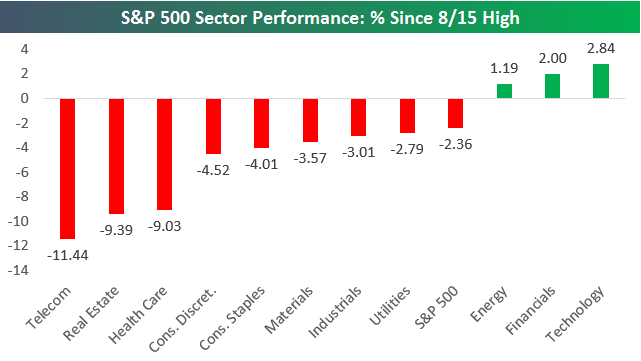 9. Read of the Day…Cullen Roche.

Chart of the Day: Golden Era of Low and Stable Growth

One of the dominant themes in economics these days is that low growth means we are worse off. Some people call this “secular stagnation” or something similar. I’ve challenged this view and say this doesn’t account for how stable our economy has become. In other words, it doesn’t adjust for the risks we face.

You see, in portfolio management low growth isn’t necessarily bad. After all, would you rather earn 8% on a rollercoaster ride of volatility or would you rather earn 6% in an incredibly smooth and predictable trajectory?  The point is, it’s not just about how high your returns are. It’s about how you achieve those returns. Most people would sacrifice some growth in exchange for greater stability. Likewise, in our economic growth we should be happy to see lower growth if it comes with greater stability.
>global growth has only averaged about 2% per year since 1700 so those 3-4% growth rates of the late 1800’s and 1900’s were a secular boom). And at the same time we’re achieving that lower growth rate with much greater stability as our expansions become longer and our recessions become shorter.  Even when you adjust for the depth of downturns, our economy is becoming much more stable (including the 2008 crisis) as the depth of these recessions become less dramatic over time. 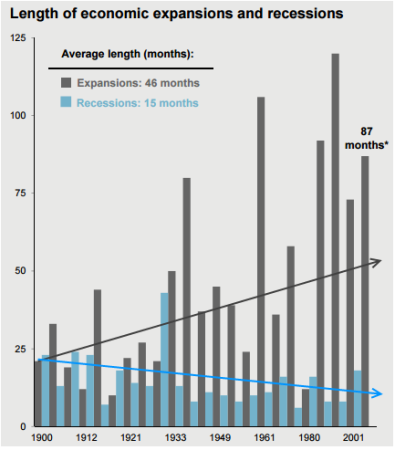 (Edited Chart – I added those pretty arrows – via JP Morgan)

This doesn’t mean everything is hunky-dory. Low growth could coincide with other bad effects like greater inequality. But it also highlights the fact that things might not be quite as bad as many seem to believe…

10. 8 Things to Remember When You Fail

Changing the way you think about failure is key to bouncing back. 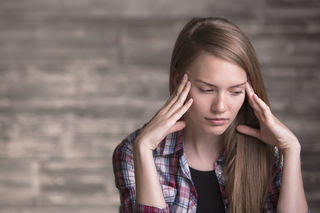 Why does failure cause some people to give up on their dreams while others bounce back even better than before? It has to do with the way they think about failure. Failure can be part of the long road to success—but only if you think about it in a way that’s productive.

Beating yourself up for your lack of success or declaring yourself a hopeless cause leads to unhelpful feelings, like shame or resentment. And it can lead to unproductive behavior, like staying inside your comfort zone.