1.Consumer Discretionary Stocks have Tripled Since 2009…”Never Bet Against the American Consumer”—A Lesson I Learned on Trading Desk.

The Good News is that the Rest of the World wants to Spend Like Americans. 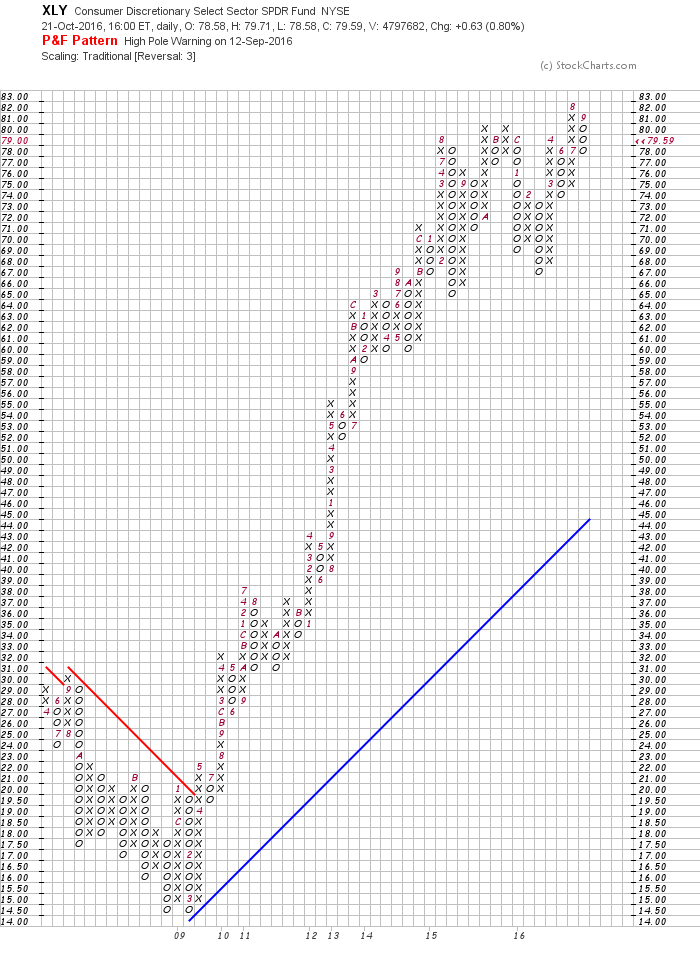 MLP valuations relative to other high-yielding sectors are appealing. With a 7.2% yield, the MLP index pays out about 5.5 percentage points more than the 10-year Treasury. The long-term average spread is 3.4 points, indicating that MLPs are inexpensive, says Richard Daskin, a subadvisor for MLPs at Cumberland Advisors. MLPs also yield 2.9 points more than an index of investment-grade triple-B corporate bonds. “This is a reasonably good entry point on a spread basis,” says Daskin.

The MLP sector is vulnerable if oil prices fall or rates rise. Some MLPs still have too much debt. Investors should avoid individual MLPs yielding over 10%, which indicates investors think a distribution cut is coming, says McGregor. “Still, there are a good number of MLPs where we see distributions as relatively safe and valuations are compelling relative to other high-yielding sectors,” he says. 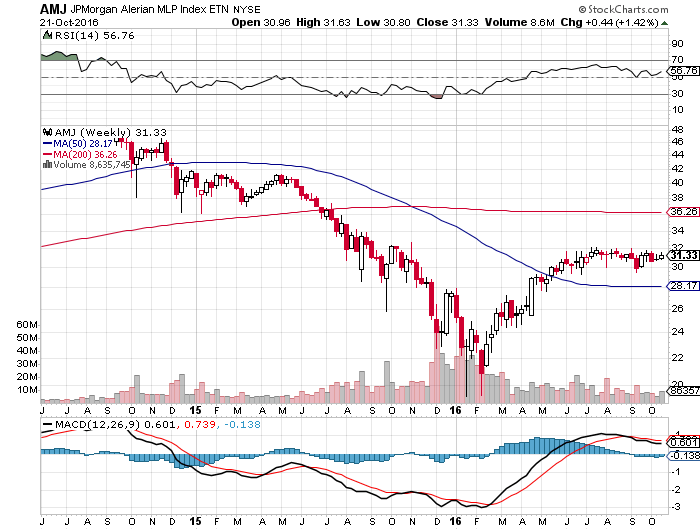 Interesting that it’s not even back to April/May levels…50day and 200day still sloped downward. 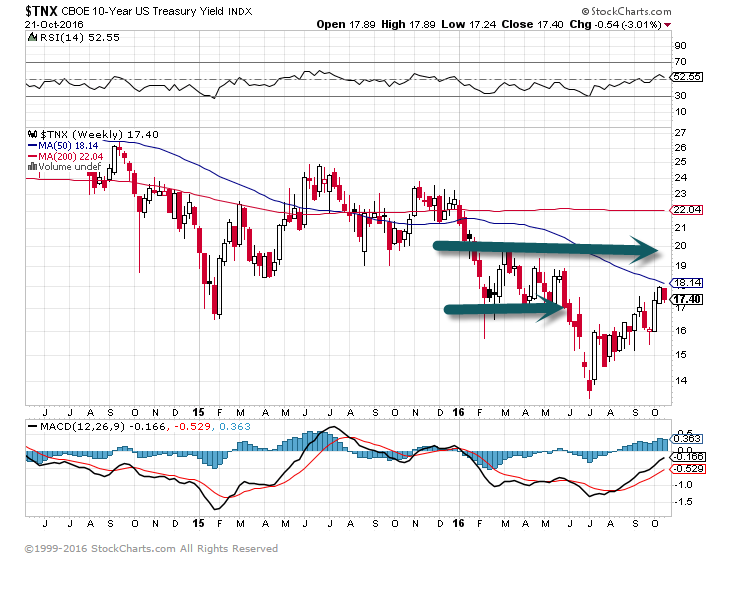 4. Follow up on my Natural Gas Comments from the Last Few Weeks…..The Index is Bumping up Against a Trend Line Going Back to 2008. 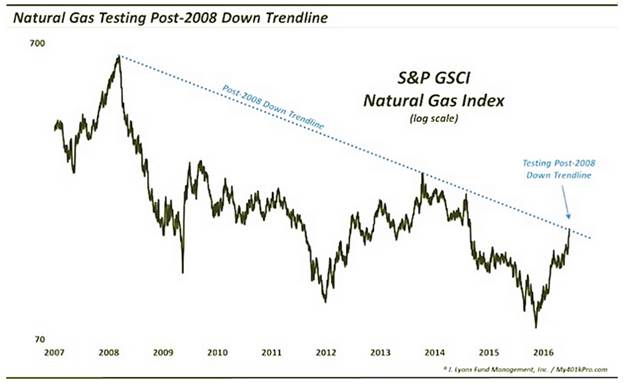 Bloggers note the GSCI Nat Gas Index is bumping up against the Down trendline stemming from its 2008 top and connecting the early and late 2014 tops.
Thanks to Dave Lutz at Jones for Chart.

US natural gas prices dropped sharply on Friday as stockpiles rose more than expected and the temperatures in the US are expected to stay above average in the next couple of weeks (and possibly through November). 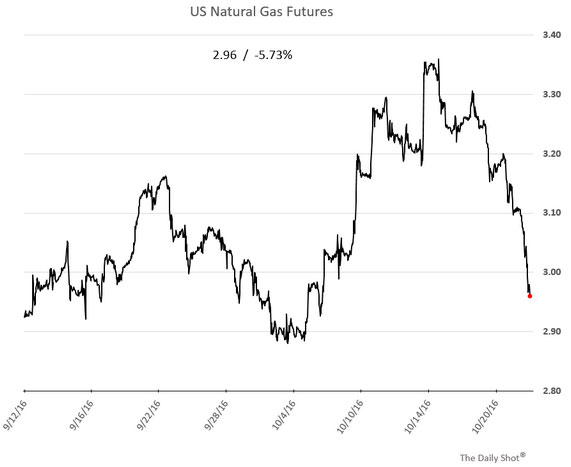 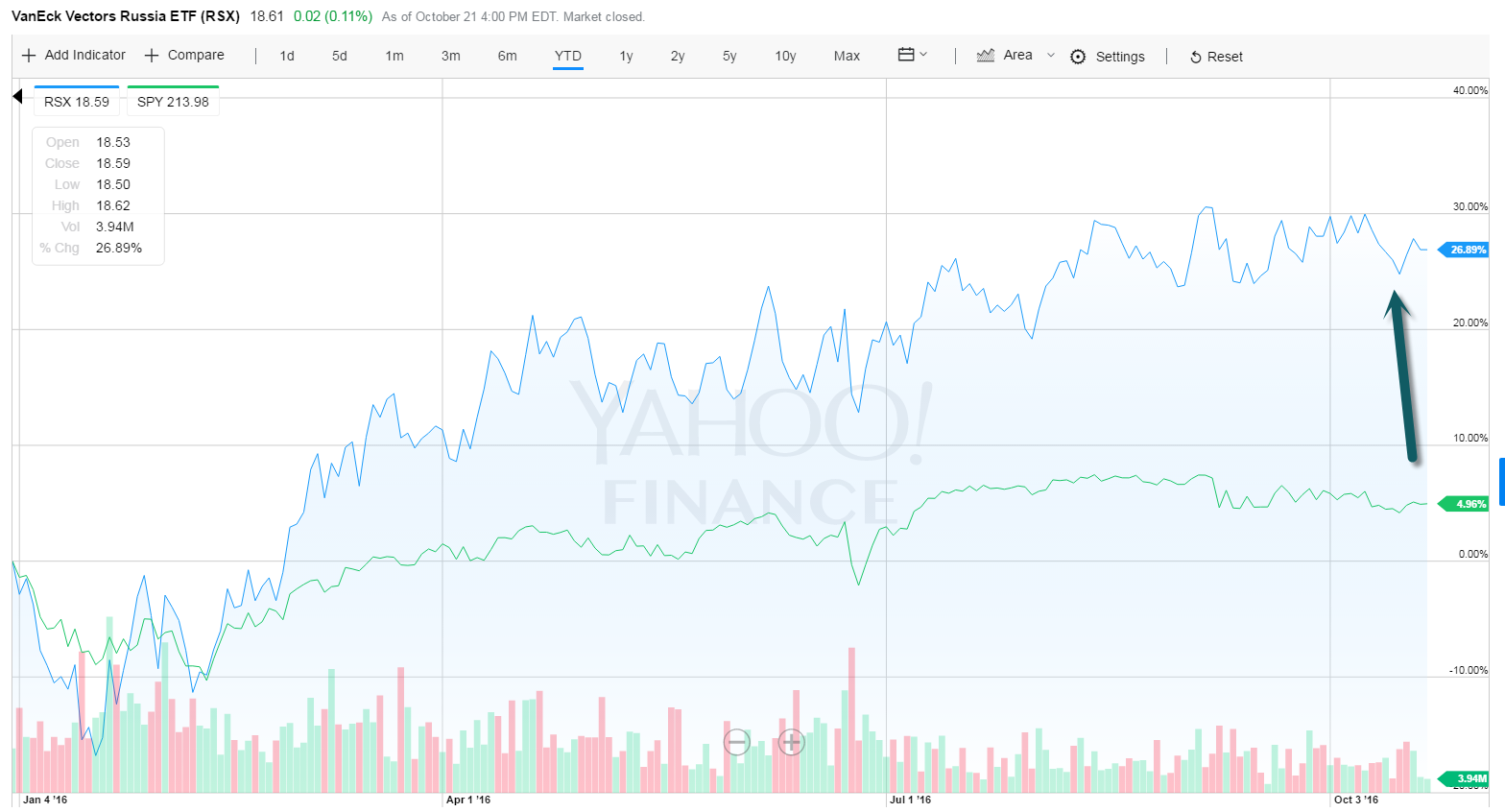 Hedge Funds Load up on Russian Currency as Oil Recovers.

Speculative accounts such as hedge funds have plowed into long Russian ruble positions, with the latest CFTC data showing record net longs. The ruble is increasingly looking like a crowded trade. 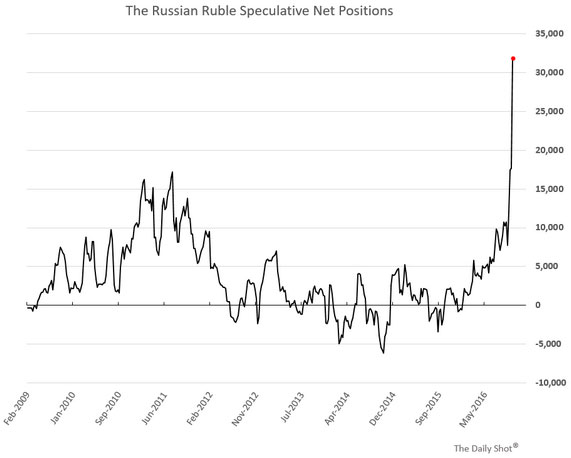 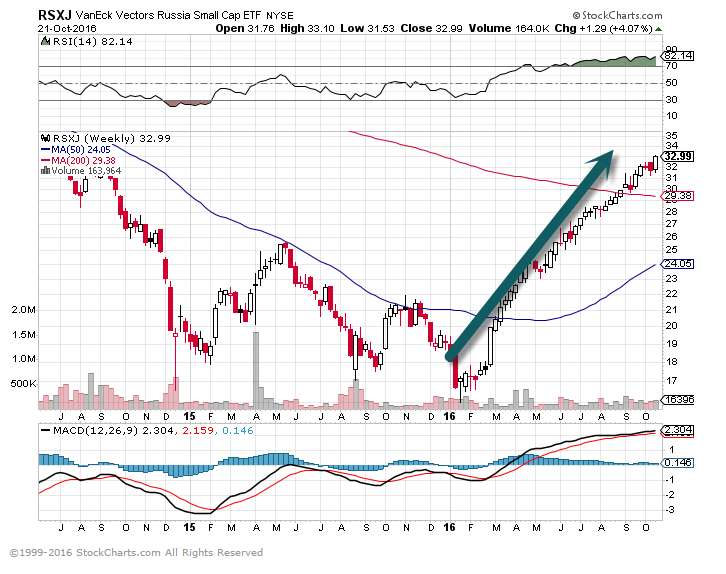 6. Scottrade has been Sold to Ameritrade….Similar to Consolidation Starting in Mutual Fund Industry….Less and Less American are Trading or Owning Individual Stocks.

Consolidation in active management and stock trading firms should continue.

As floated on Sunday, Scottrade has been sold to TD Ameritrade (NASDAQ:AMTD) for $4B. The deal will take place in two stages, with TD Bank (NYSE:TD) first buying Scottrade Bank for $1.3B in cash, and then Ameritrade purchasing Scottrade Financial Services for $4B, or $2.7B of stock and cash net of the proceeds of the bank sale. Ameritrade will issue $1B in new stock (28M shares) to Scottrade, and the $1.7B in cash will include $900M of its own money, $400M in new debt and $400M raised by selling another 11M shares to TD Bank (TD Bank is already an owner of 42% of Ameritrade). Thanks to about $450M in combined annual expense synergies, Ameritrade expects 15-20% adjusted EPS accretion in years two and three following the close. Another $300M in longer-term cost savings are hoped for as well. A conference call is set for 8:30 AM ET.

7. The Fed wants 5 Year Forward Inflation Expectation Rate Above 2%….Not at Target Yet. 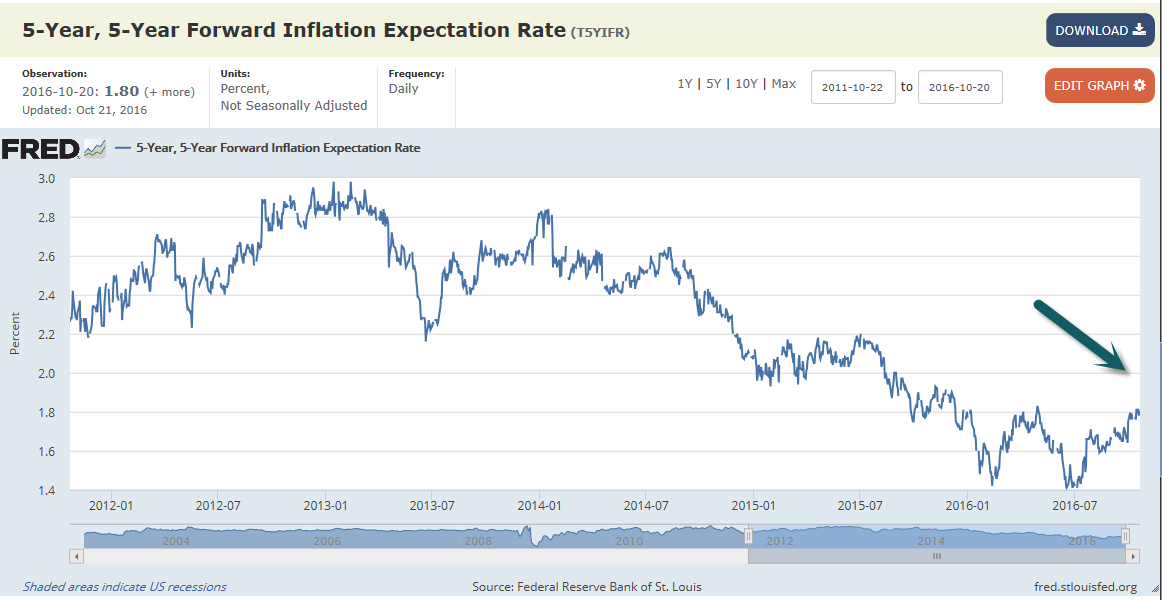 8. We may Finally Get Wage Inflation…Pushing 5 Yr. Break Even Above 2%. 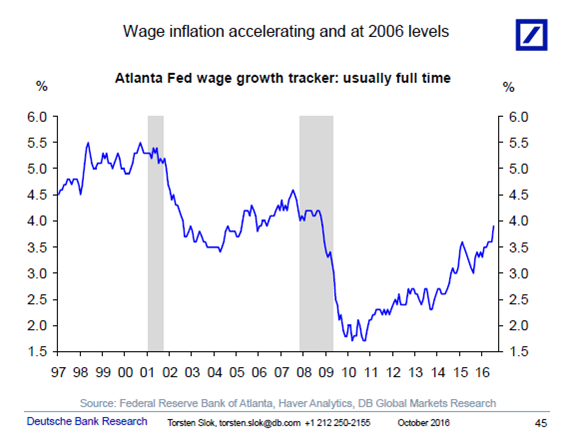 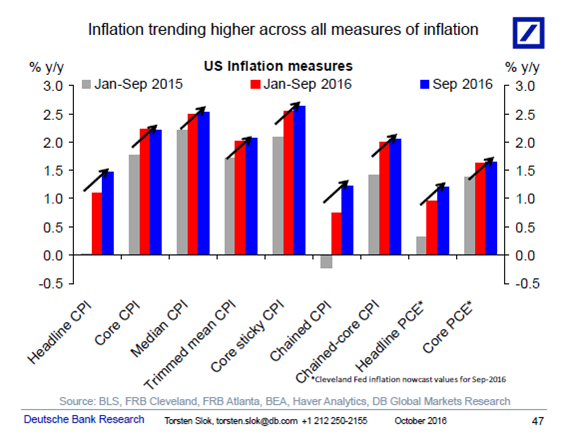 We are at a Record Gap in Household Income..Reversion to Mean Coming or Secular Trend Permanent?

Macro
Income inequality in the U.S. has been rising steadily since the mid-1970s and reached a record high in 2013. One of the main drivers of income inequality over time has been the widening wage gap, along with the declining share of wages and salaries as a percent of personal income.  Comparing the cumulative growth of real mean versus real median household income shows a growing divergence over time (see chart E120G below).  Real mean household income, which is pulled up by high-income earners, has increased an average 1.0% per year since 1967, double the average pace of growth of real median household income. In 2015, mean income rose 4.5%, while median income posted a record 5.2% gain, and reached its highest level since before the start of the last recession. The cumulative gap, however, continued to widen.  For more on income inequality, please read the full featured report, Has Income Inequality Reached a Turning Point?
by NDR Senior U.S. Economist, Veneta Dimitrova. 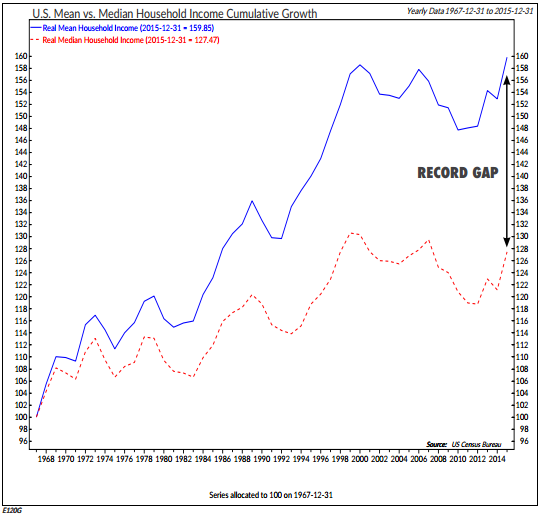 Among younger men ages 21 to 30, the labor-force participation rate fell by 7.6 percentage points, to 82.3% from 89.9%, over the 10 years ended in October 2014, partly because they stayed in school, presumably gaining marketable skills. Time spent on education jumped by 5.3 hours per week, which occupied 38% of their time. But time spent playing videogames rose to 6.7 hours per week, an increase of 3.1 hours, although time watching television dipped by two hours, to a still sizable 21.7 hours per week.

As for prime-age men not in the labor force, Krueger found an astonishingly high number who reported having serious health problems and being on pain medication. Half said their health presents a serious barrier to employment, while nearly half take pain medication daily, two-thirds of which involve prescription meds. Even more distressingly, prime-age men out of the labor force report low levels of emotional well-being and say that they derive little meaning from their daily lives.

As a social scientist, economist Krueger can cite correlations, but actual causality can be open to question. In order to get disability or other benefits, a person has to declare convincingly that he or she has a health problem that precludes work. To justify writing a prescription for pain medication, a medical professional has to determine whether the patient needs it, and measuring pain is highly subjective. At the same time, opioid addiction has become a scourge across the nation. 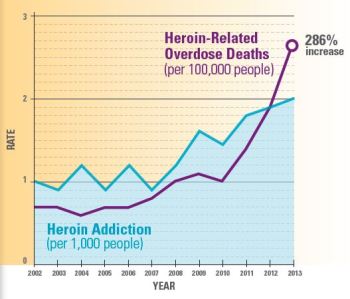 You can read every leadership book out there, until you’re an expert in the art of managing other people.

But ultimately, this knowledge is useless if you don’t know how to manage yourself.

That’s according to Andrew D. Wittman, author of “Ground Zero Leadership: CEO of You.” (The book is available throughWittman’s website, but not on Amazon.) Wittman is a former US Marine, police officer, and federal agent; today he trains organizations and individuals on mental toughness.

In the book, he offers tips on tweaking your mindset so you can achieve your biggest and scariest goals.

Mental toughness, he told Business Insider when we spoke in October, comes down to the ability to control your thoughts, emotions, attitudes, and actions under pressure. Below, we’ve listed some of Wittman’s best tricks to develop these skills for success.

When you’re faced with a stressful situation, spend two minutes thinking about how you’d accomplish the seemingly impossible task ahead of you.

Say your boss announces that he expects you to submit a project by 5 p.m. today and you know there’s no way you can do that. Take a mental break to think: “If this were possible, how would I do it?”

“You’re not arguing that it’s not impossible,” Wittman said during our interview. “But your brain will actually do the work and come up with answers” — answers that might help you get that project done by 5.

Your language makes a huge difference in your attitudes and your behavior, Wittman writes. Try to omit the word “don’t” from your speech and your thoughts, so that you’re less focused on the potential negative outcome and more focused on the positive.

That’s Clarity, Relevance, Accuracy, Precision. Here’s how it breaks down:

Relevance: Does this obstacle help me or hurt me in hitting my target?

Accuracy: Exactly how far away is the target?

Precision: Can that assessment be more exact?

Wittman advises keeping a running tally of every time you make an excuse or blame someone else.

If it happens more than three times, you know you’ve developed a habit of making excuses — and it’s time to break it. One way to do that is to ask yourself: “Is this excuse helping me get any better results?” If not, own up to your mistakes and fix them.

“Multitasking is the bane of the Average Minded,” Wittman writes, “doing a lot of things at once but never being great at anything.”

Instead, he advises concentrating your mental energy on a single target and how you can get there. Only after you’ve hit that target you can move on to another.

Wittman writes: “If you don’t know what you are willing to fight for and why, the chances are pretty high (100%) that you will quit fighting when it gets hard.”

In fact, his main goal as a mental toughness coach is to help clients identify their emotional driver and keep reminding them of it.

During our interview, Wittman said one way to find your emotional driver is to complete the “Five Whys” exercise. Ask yourself at least five times why you want to achieve your goal, until you get to the root cause.

you aspire to be?Strelka Institute for Media, Architecture and Design/Flickr

At the very beginning of mental toughness coaching, Wittman asks clients to tell him who they are. They usually talk about their job, or maybe their role in their family. But Wittman encourages them to dig deeper.

His personal statement? “I am a man of excellence, who always keeps his word.”

From there, you can adjust your behavior to match the values you aspire to uphold.

8. Desensitize yourself to your fears

Wittman said that when he started his own business, he was terrified of making sales calls. Specifically, he was afraid of getting flat-out rejected.

So he took on a project for which he had to make 50 cold calls every week. The idea was to systematically desensitize himself to making those sales calls — and eventually, he was able to do it without panicking.

9. Use criticism as motivation to improve

Whatever you do, Wittman writes, “DO NOT internalize critical comments that put you down.” Remember: When you’re in charge of your own thoughts and feelings, no one can make you feel bad about yourself.

At the same time, Wittman advises trying to look at each criticism objectively: “Think about what was said, but rephrase it to the most neutral and unemotional language you can conjure up. Then ask, “Is this an area in my life that could use some development?“