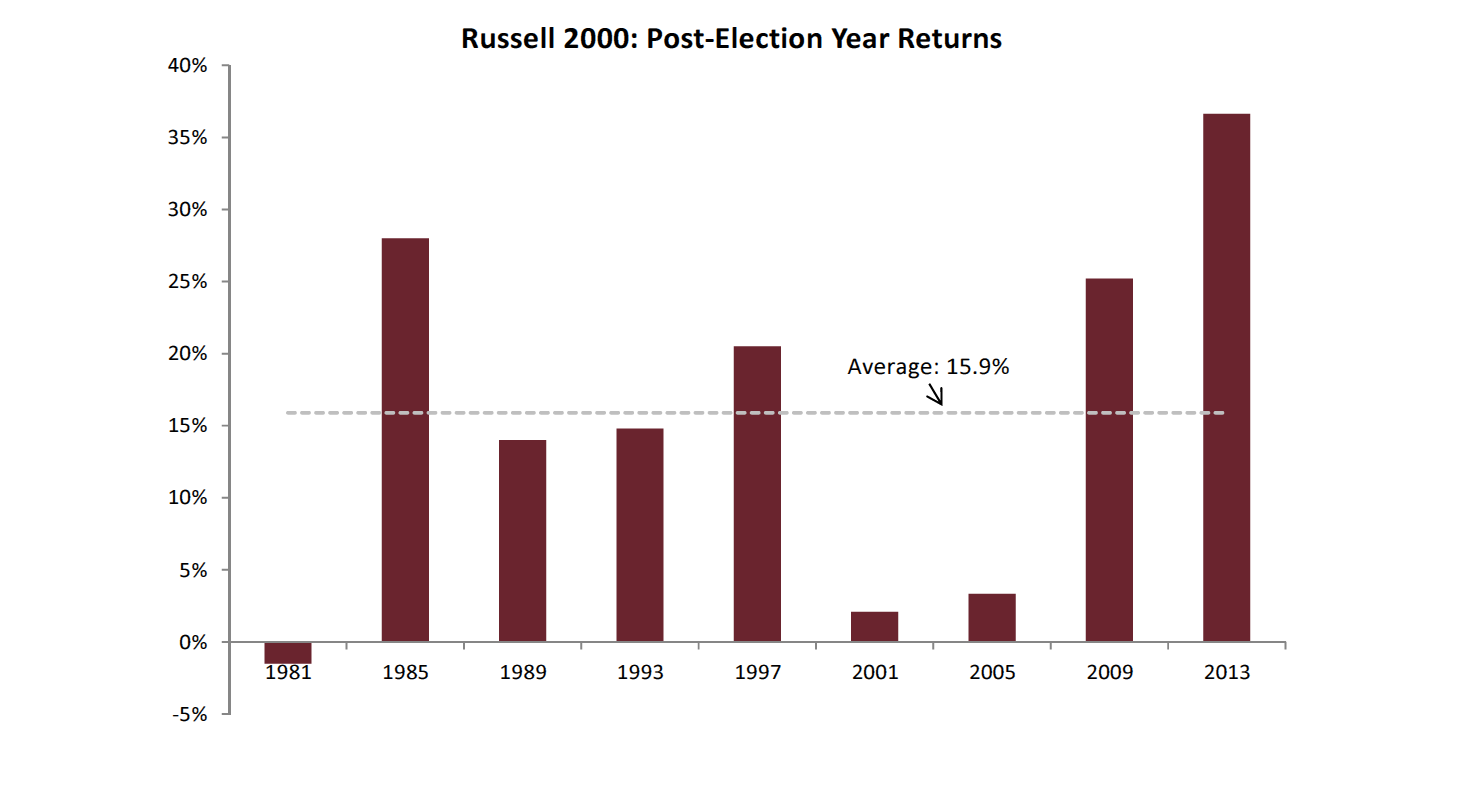 2. October is Traditionally the Most Volatile Month of the Year….Not Even a Blip in Small Cap Vol. 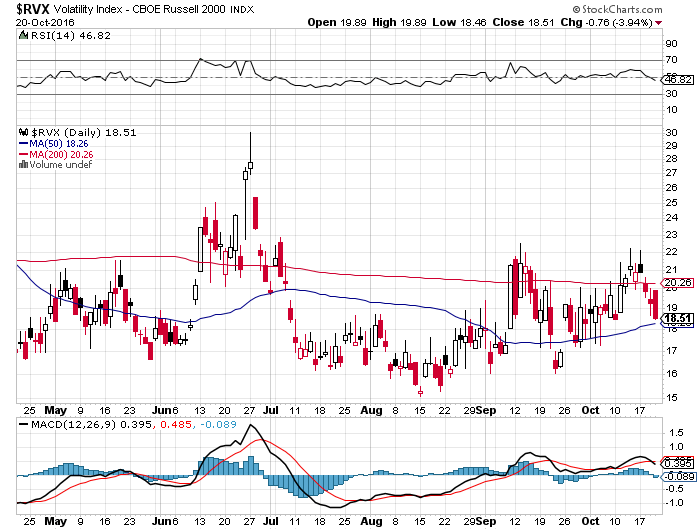 50day thru 200day to upside..Blue thru red line 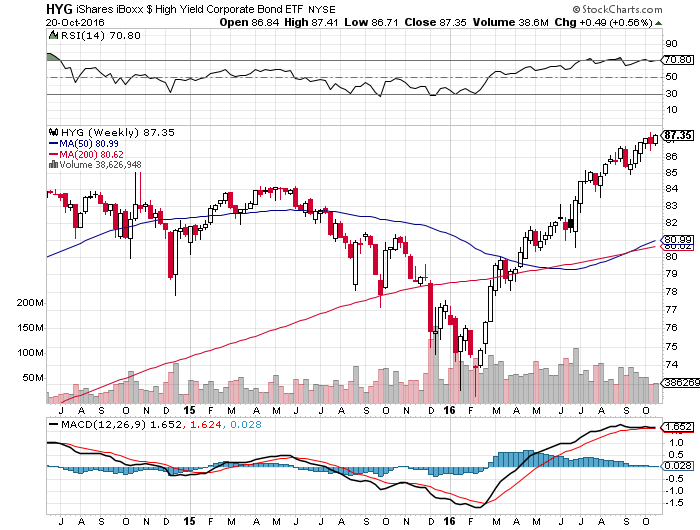 According to some models, US HY bonds are extremely overvalued relative to default expectations. 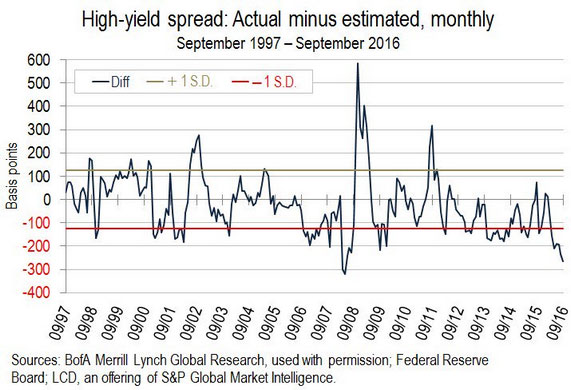 4. China Devalues Most Since August, Yuan Tumbles To Lowest Since Sept 2010….My chart of year Yuan

For the 10th day of the last 11, onshore yuan has weakened against the dollar. A 0.35% devaluation of the Yuan fix – the most since August – catching down to offshore Yuan’s weakness, suggests (for now) PBOC policy is ‘allowing’ the drop and perhaps sending yet another ‘turmoil-induing’ message to The Fed as their hawkishness grows.

Since the start of Golden Week, yuan has plunged… 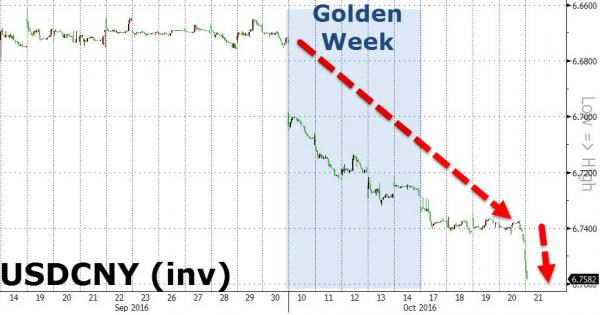 The explanation is in the surprisingly sharp decline in multi-unit building starts. 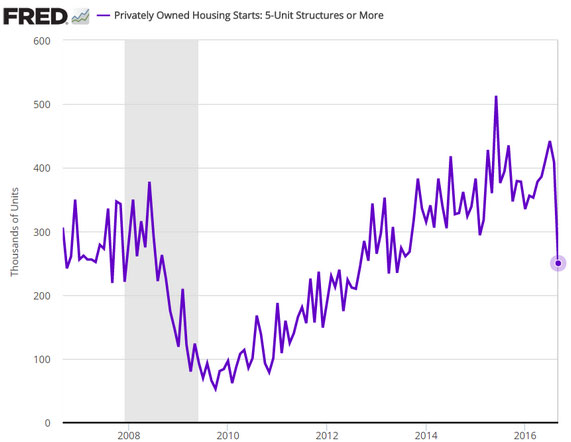 Part of the issue is that the number of multi-unit structures currently under construction is at the highest level since the early 1970s. Anecdotal evidence suggests that homebuilders have capacity issues because they can’t seem to hire enough qualified workers for larger apartment projects. Perhaps. 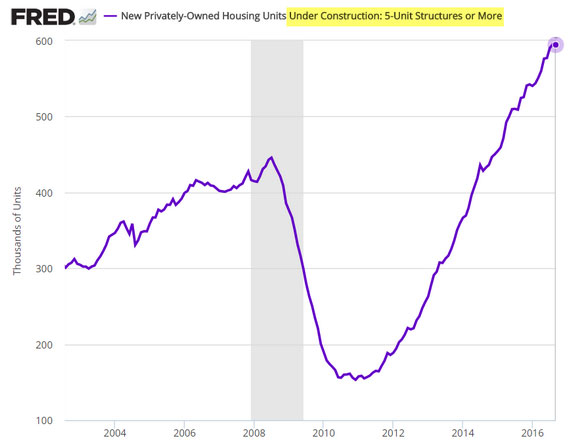 Whatever the case, while multi-family starts have dropped, the number of permits is recovering. 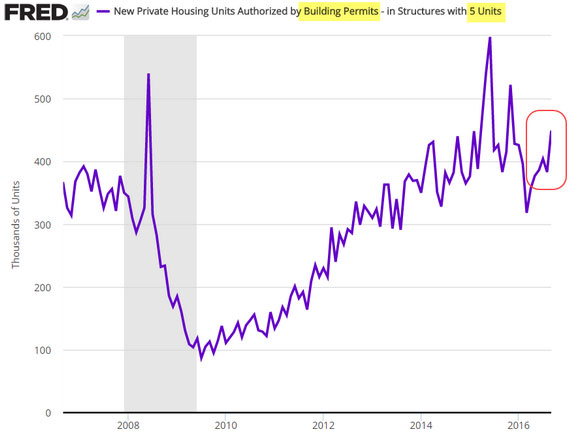 6. Clinton 20 Point Lead Over Trump Among Women Biggest Since 1972

The first thing to note: We haven’t seen anything like Clinton’s 20-point lead over Trump among women in decades. Women favored Bill Clinton by about 20 percentage points in 1996 (a landslide election), but the last time women favored either party’s nominee by more than 20 points was in 1972, when Republican Richard Nixon crushed Democrat George McGovern among both sexes. The only Democrat ever to win women by more than 20 points was Lyndon Johnson in 1964 — also in a blowout. Four years ago, President Obama carried women by only about 12 points. Even when he first won the White House, in 2008, by about double his 2012 margin, his margin among women was only 14 points.

And yet, Trump is still carrying men. If the live-interview polls are on the mark, the difference between how men and women vote — the gender gap — in 2016 would be historic. Dating back to 1952, there has never been a 26-percentage-point gender gap. 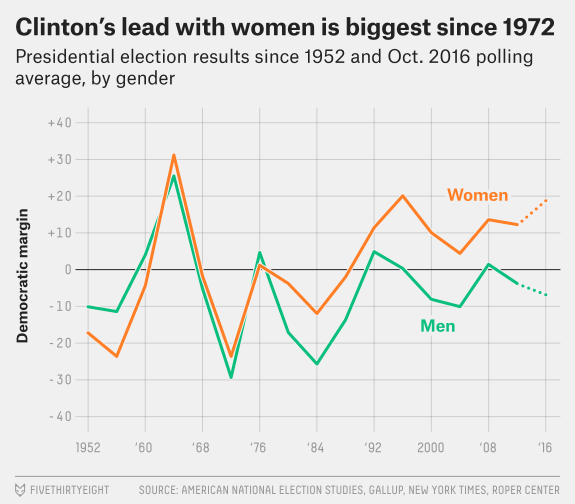 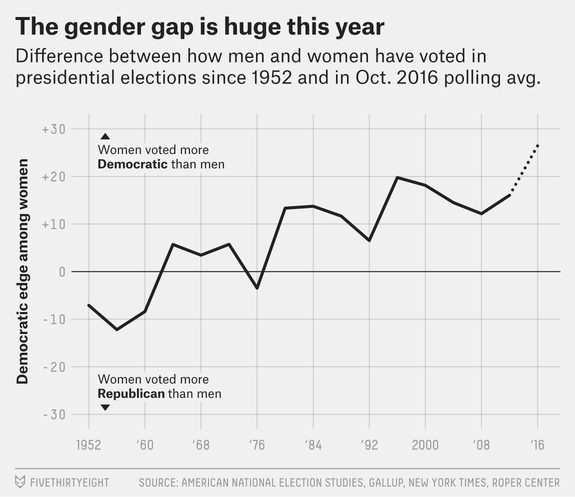 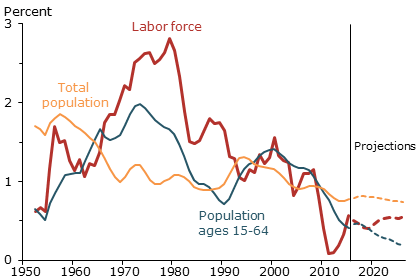 Future labor force growth is likely to remain low for a couple of reasons. First, as shown in Figure 1, the population is now growing relatively slowly, and census projections expect that slow pace to continue. Second, these projections also suggest the working-age population will grow more slowly than the overall population, reflecting the aging of baby boomers. Of course, some of those older individuals will continue to work. Hence, the Congressional Budget Office (CBO) projects the labor force will grow about ½% per year (red dashed line) over the next decade—a little faster than the working-age population, but substantially slower than in the second half of the 20th century. I use their estimate as a basis for my assumption that hours worked will also grow at about ½% per year so that hours per worker do not change much. 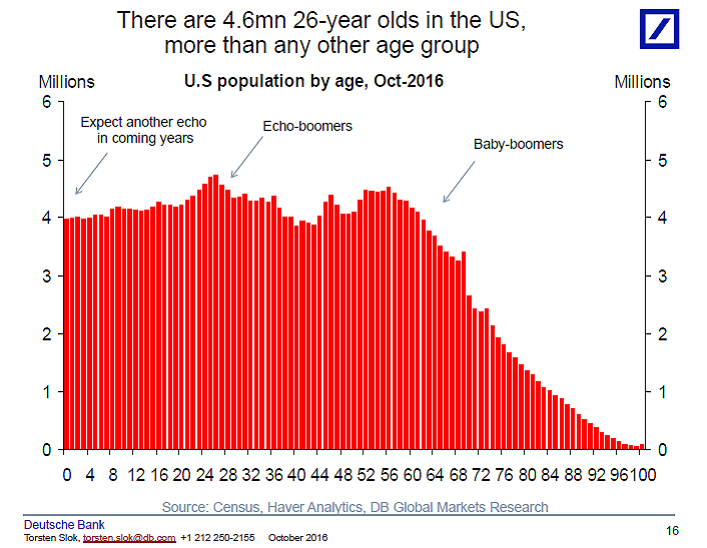 9. Read of Day–Relax… The World Is Actually Getting Better

I’ve had a number of readers note the gloomier tone of some of my recent columns.

That’s due, in part, to our new era of “administrative markets” where stock returns are affected as much by government policies as they are by economic growth and corporate profits.

This is not a good thing.

This distorts markets… and holds back economic growth.

Yet the trend line for Western society on the whole is still positive. Heavy consumers ofcable news will beg to differ. Yet I find there is much they generally don’t consider.

Polls show the majority of Americans believe life in the U.S. was better 50 years ago.

Life was simpler and less stressful then… and we were younger, healthier and better looking.

But set your nostalgia aside for a moment. By most objective measures, it simply isn’t true that life was better. (And it’s especially untrue if you happen to be a woman, black, handicapped or gay.)

As recently as 1987, only 48% of Americans approved of interracial dating. In 1964, the American Civil Liberties Union agreed that gays should be barred from government jobs. And if you were in ill health 50 years ago, you didn’t have many of the drugs, vaccines, and medical devices and procedures that would keep you alive today.

We are living longer, safer, richer, freer lives than any people in the history of the planet.

The shame is that – despite our higher IQs – the majority of us still don’t realize it.

10. 4 Common Reasons Why You Fail to Achieve Your Goals

Are you making progress? In this article I’m going to give you 4 reasons why you fail to achieve your goals and hopefully by the end of this article you will be able to make the necessary adjustments.

1) You have too many goals

How many goals do you have? Having too many goals is one of the most common mistakes that people do. When you try to aim at too many targets as the same time you end up hitting none of them.

Look at your current list of goals; what are the two or three main goals that you absolutely want to achieve?

To achieve your goals I highly recommend you to focus on the 1 or 2 area(s) of your life in which you really want to make significant changes. Identify the one or two main goals that will have the maximum impact in these areas before moving to any other areas of your life.

Main areas include your career, your health, your relationships, your personal growth and your finance. You should spend the majority of your time working on these goals because they will have the biggest impact on your life.

What are the areas of your life you really want to focus on right now?

2) You are not obsessed with your goals

Let me guess: the only time you set goals is at the beginning of each year as part of your so-called New Year resolutions, but you quickly forget your resolutions a few weeks later.

Let’s be honest, how truly committed are you to achieve your goals? How often do you look at your list of goals?

Here some of the things I personally do to ensure I stay on track with my goals:

3) You are not mentally prepared

You may be obsessed with your goals but what if you encounter major setbacks during your journey towards these goals?

Most people give up to easily on their goals and the main reason for that is because they fail to prepare themselves mentally for temporary setbacks. They don’t create a clear plan of action that they can implement to cope with setbacks. Here are some questions you should ask yourself:

What are all the possible obstacles that I may encounter as I’m working towards my goals? How will I tackle them? What would have to happen for me to give up?

Just by visualizing everything that may go wrong and writing down a contingency plan you will significantly increase your ability to persevere when facing temporary setbacks.

I found lack of patience to be a major problem as I work towards my goals. The more obsessed you are with your goals, the more emotionally involved you will become. This is a good thing.

However, you also need to realize that constantly thinking about your goals can make you feel like you’ve been working on them for an entire year even though it has only been two weeks!

Then, you start feeling like you are not getting any result and before you know it you start doubting yourself ready to give up. Does it sound familiar? When that happens, keep telling yourself « it’s okay, I have time. I have time. »

You have time so don’t let your mind trick you and keep working on your goals every day. Let me say it again: “you have time!”.

These tips helped me tremendously stay on track with my goals so I sincerely hope that they will be as beneficial to you as they are to me. In case you don’t have written goals yet, I highly encourage you to get started today!

Here is a special bonus for you

Why not go further in your personal development journey? If you like this article I’m sure you will benefit from my free e-book. You can download it below: