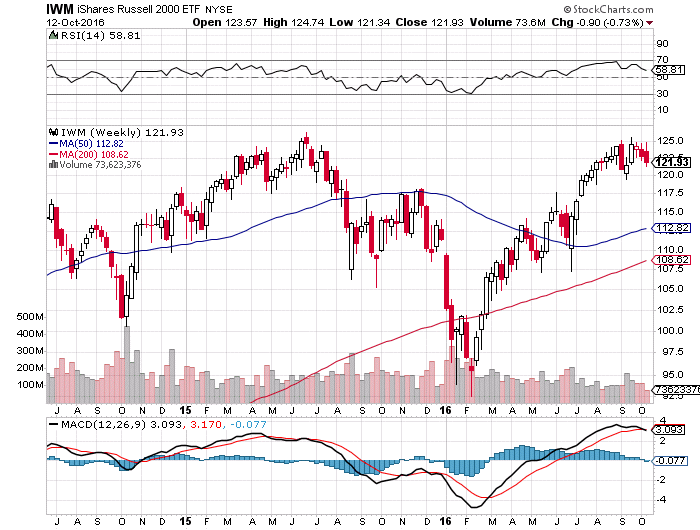 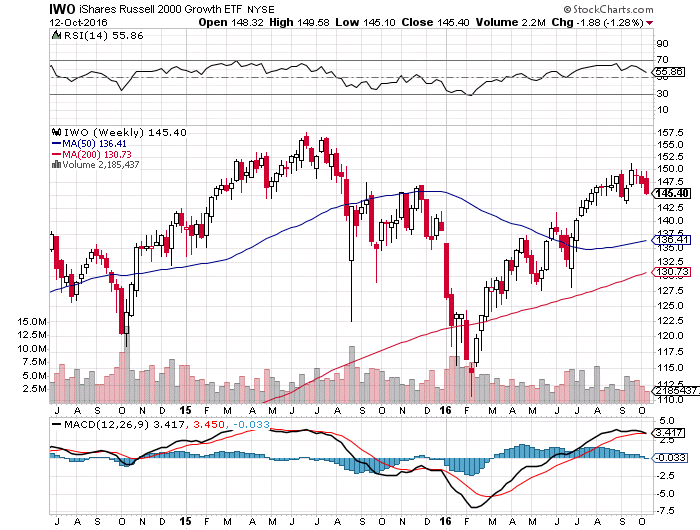 1BEIJING–China’s exports fell sharply in dollar terms in September from a year earlier, as global demand for goods from the world’s second-largest economy remained sluggish.

Exports tumbled 10.0% from a year earlier, following a decline of 2.8% in August, the General Administration of Customs said Thursday. The figures indicate that China’s overseas shipments, once an important generator of growth, are continuing to weigh on its overall economic performance.

September’s figure mark the sixth-straight month that exports have softened. It was much worse than a median forecast for a 3.2% decline from a poll of 16 economists by The Wall Street Journal.

4. Follow up to my Comments Yesterday on Natural Gas, Inventories Close to Balance. 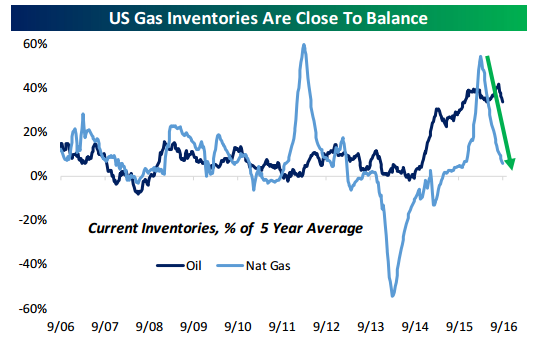 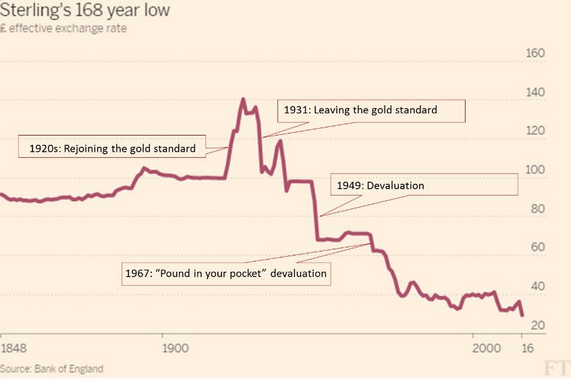 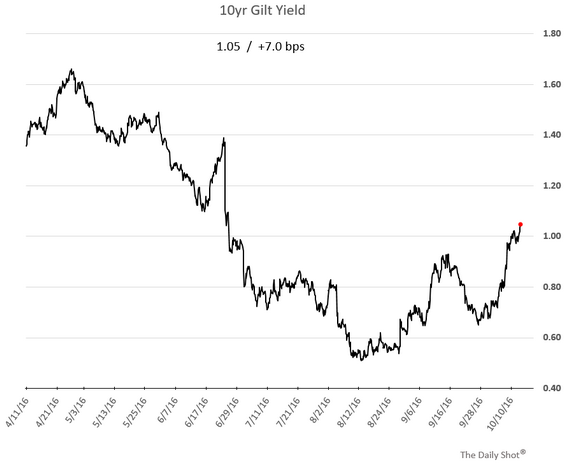 One day old, now shifted below 50 to neutral. 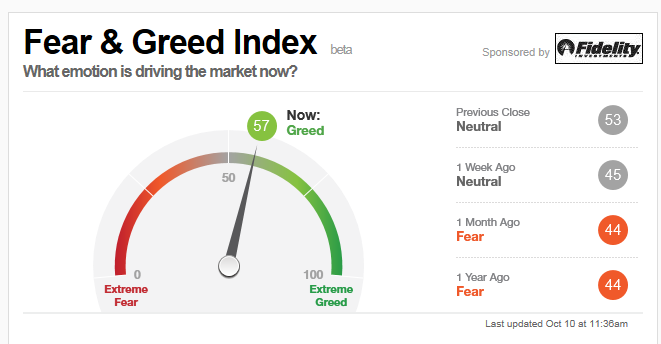 7. In Both Positive and Negative Years, Double Digit Gains or Losses are Far More Common that Single Digits…Wow!

Some killer data from my colleague Ben, who runs institutional asset managementhere at Ritholtz Wealth Management:

This stuff is not obvious and rarely illustrated so plainly. It is prima facie evidence that risk is rewarded often, but not always.

Source: The Consequences of Risk Taking (A Wealth Of Common Sense) 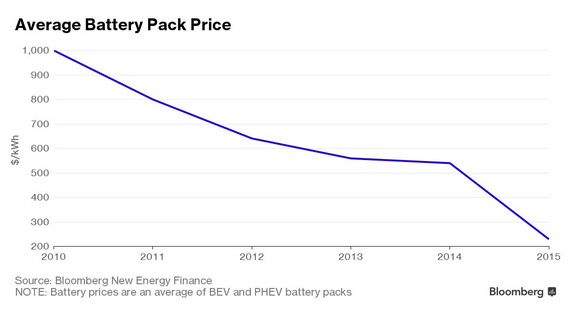 9. Have we seen the Generational Low in Interest Rates?

The longer interest rates stay low, the more difficult it will be for pension funds and life insurance companies to meet liabilities.

“Sustained low interest rates are eroding the viability of business models for many life insurance companies and pension funds, threatening solvency over the medium term,” the report stated.

For pension funds in most countries, low interest rates mean higher liabilities, as lower discount rates increase the present value of future obligations. Many pensions already face funding gaps, and these have been “exacerbated” by low rates, the IMF said.

“Defined benefit pensions of US and European companies have seen their funding gaps worsen since the onset of the crisis,” the IMF said. “This reflects a combination of low asset returns (especially on safe assets, such as sovereign bonds) and falling interest rates.”

Furthermore, the IMF said that the shift toward liability-driven investing strategies, which rely on fixed income products, will contribute to declining yields on those assets. This will in turn reinforce funding gaps and generate additional demand for bonds in a “potentially negative spiral,” the report warned.

A period of prolonged low rates could also have disastrous effects on insurance companies. In the US and the UK, the IMF said low rates are “straining their ability to control longevity risk because of the higher cost of hedging.”

Meanwhile, insurance companies in Germany and Japan, which often offer guaranteed returns, are at risk of “an eroded asset-liability management gap as policies continue to pay out a return higher than current rates.”

To address these risks, the IMF said the International Association of Insurance Supervisors should “act promptly to ensure the ongoing strength of insurance company balance sheets.” In particular, the IMF highlighted a need for “high and robust standards” on insurance capital—but warned that chances for consensus on an international standard have been threatened by Brexit and the disinclination of the US Federal Reserve to adopt such a standard.

As for pension funds, the report suggested stronger regulations in Europe to ensure a common framework for risk assessment and enhanced transparency, including valuing assets and liabilities on a market-consistent basis to facilitate standardized reporting and analysis. However, similar proposals have proven unpopular with European funds.

In my book I discussed the fact that investing is inherently an exercise in regret minimization:

Everything about the investment process is a series of trade-offs. Investing itself is delaying current consumption for future consumption.

Investing really comes down to regret minimization. Some investors will regret missing out on huge gains while others will regret taking part in huge losses. Which regret will wear worse on your emotions?

Investors are constantly battling conflicting emotions and desires. We want higher expected returns in the long-run but we also want stability in the short-run. We want to take advantage of volatility but not experience it in our portfolios. We want to earn higher yields on our investments but accept none of the higher risks involved. We want all of the upside with none of the downside.

Since these desires are pipe dreams we’re all forced to make trade-offs and do the best we can to balance risk, reward and our ability to handle the often stressful nature of making decisions with our life savings involved.

This works beyond investing, as well. Every big decision you make in life will involve some sort of give-and-take.

Amazon.com founder and CEO Jeff Bezos has a great take on this idea when it comes to making life-altering decisions.

When he first considered starting Amazon, Bezos was actually working for D.E. Shaw, one of the biggest, most well-respected quant-driven hedge funds in the business. It seems like a no-brainer in hindsight, but at the time it was not the safest career move to leave a well-paying hedge fund job to start an online bookstore.

So how does someone like Jeff Bezos make this kind of life-altering decision?

Here’s the story as told by Brian Christian and Tom Griffiths, in their excellent book, Algorithms to Live By: The Computer Science of Human Decisions:

Regret can also be highly motivating. Before he decided to start Amazon.com, Jeff Bezos had a secure and well-paid position at the investment company D. E. Shaw & Co. in New York. Starting an online bookstore in Seattle was going to be a big leap — something that his boss (that’s D. E. Shaw) advised him to think about carefully. Says Bezos:

“The framework I found, which made the decision incredibly easy, was what I called — which only a nerd would call — a “regret minimization framework.” So I wanted to project myself forward to age 80 and say, “Okay, now I’m looking back on my life. I want to have minimized the number of regrets I have.” I knew that when I was 80 I was not going to regret having tried this. I was not going to regret trying to participate in this thing called the Internet that I thought was going to be a really big deal. I knew that if I failed I wouldn’t regret that, but I knew the one thing I might regret is not ever having tried. I knew that that would haunt me every day, and so, when I thought about it that way it was an incredibly easy decision.”

I love this framework because it doesn’t involve a spreadsheet or a business plan or a large start-up investment. It has more to do with personal fulfillment and life goals than running a Monte Carlo simulation to understand the optimal decision.

People are constantly forced to make big decisions about their life in the face of uncertainty that is impossible to reduce. Should I take this job? Should I buy this house? Should I move to a new city? Should I go back to school and start all over again?

You try to make high probability decisions along the way, but life is not like a casino — you don’t know the odds in advance. Life is messy so these things are never perfect.

Bezos makes an important distinction between a decision you can live with and the potential for failure based on that decision. There’s a huge difference between experiencing regret and experiencing a poor outcome. Failure is part of life so you can’t expect every risk to pay off for you. At times you have to accept small regrets in order to avoid large ones. As my colleague Tony Isola said recently, “too many people are experts at success, but amateurs at failure.”

Here are a couple of questions to ask yourself based on this Jeff Bezos framework for making life-altering decisions:

Have I minimized the number of regrets I have in life?

Will I regret having tried this?