1.Yield Curve Steepening and Showing No Signs of Recession. 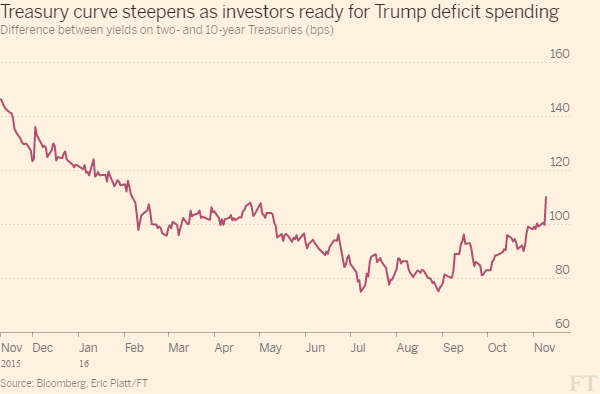 I find more reason for optimism in the yield curve – the plot of the yields on 3-month through 30-year Treasury securities. The yield curve has steepened since the election, and this is good news.

That’s not the case today. The yield curve is just the way we should like it – progressively higher with each maturity and upward sloping to the right. When the yield curve steepens, economic growth usually follows. 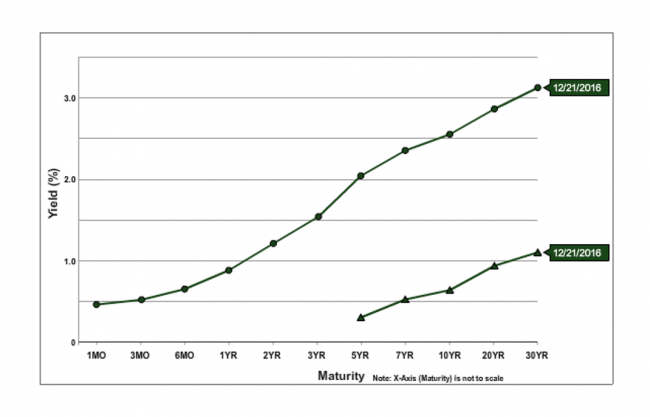 A month ago, these figures were flipped, with a plurality of investors being bearish. 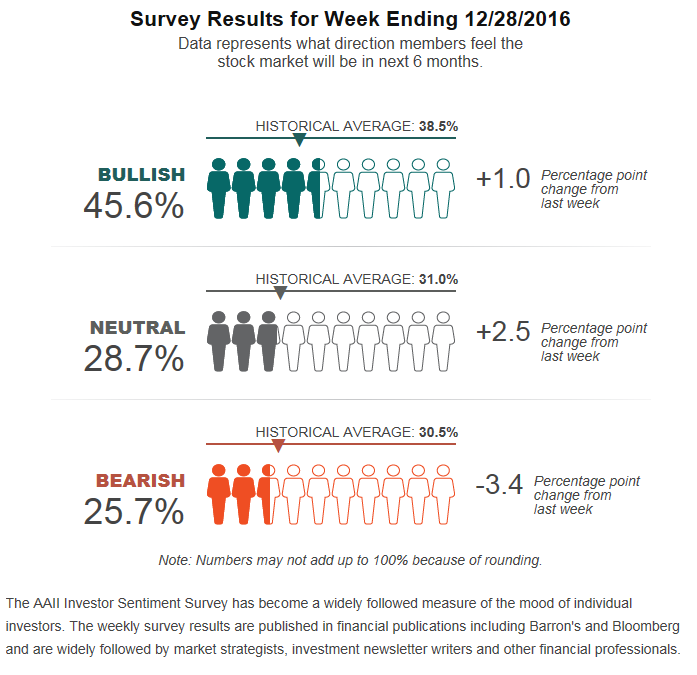 Fear and Greed Index Aggressive but not Extreme.

Canceling plans to build a new $1.6B plant in Mexico, Ford (NYSE:F) said it will invest $700M in Michigan instead, creating 700 new U.S. jobs. CEO Mark Fields said the investment is a “vote of confidence” in the pro-business environment being created by Donald Trump, but stressed Ford didn’t cut a special deal with the President-elect. The automaker was a frequent target of Trump’s election campaign for its “south of the border” manufacturing and payment of low tariffs. www.seekingalpha.com 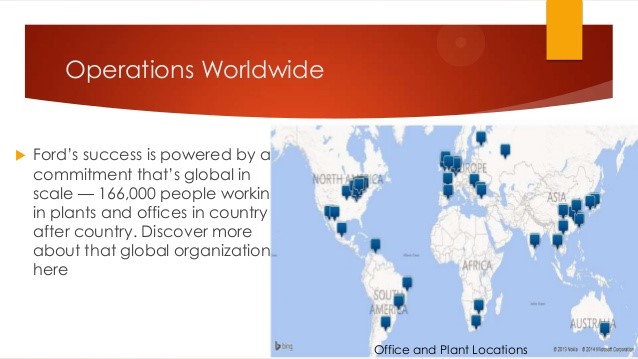 Technology to Build a Truck in One Minute. 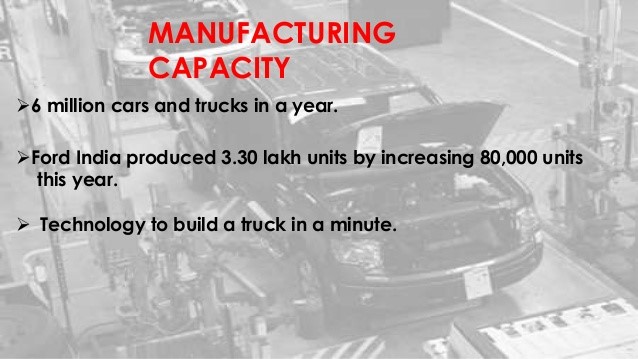 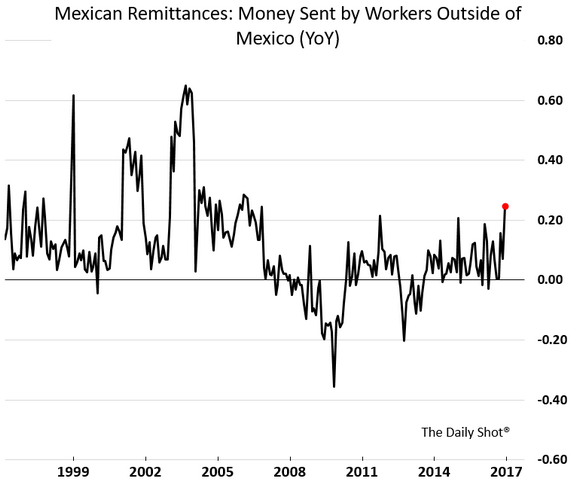 HOWARD MASON, BANKS, THEME- The Millennials.  While the prospect for a steeper curve and rising short rates, along with regulatory and tax reform, has given a cyclical lift to bank stocks the more strategic significance of 2017 is likely to be a broad re-evaluation of the role of branches for customer sales and service.

The digital erosion of branch traffic has now made ~one-third of US bank branches economically non-viable on service alone and the opportunity for make-up through in-branch cross-sell will be limited by regulatory scrutiny of sales practices and by the potential to use the location-based and real-time capabilities of customer mobile devices to deliver more needs-based marketing solutions.

Over the next decade, we expect branch-density in the US to fall by one-third from the current level of just over 30 branches per 100,000 adults, and the shift from branch to direct-channels will disproportionately advantage large players as it did for card-lending in the 1990s. Specifically, national scale and brand, along with customer lock-in to bank apps, will encroach on the network effects of local branch-systems as digital platforms change increase industry fixed-costs and catalyze investment in “test-and-learn” behavioral technology.

One measure of the advantage of large-banks is provided by their disproportionate share of millennial customers who tend to be more mobile-oriented: JPM and BAC each have ~20% share of the segment with WFC at ~15%.  Howard continues to be overweight BAC and C with above consensus estimates. 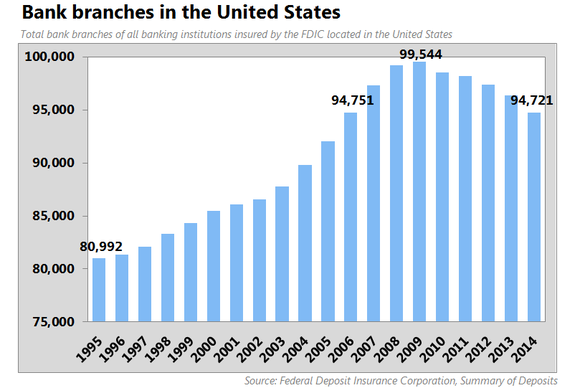 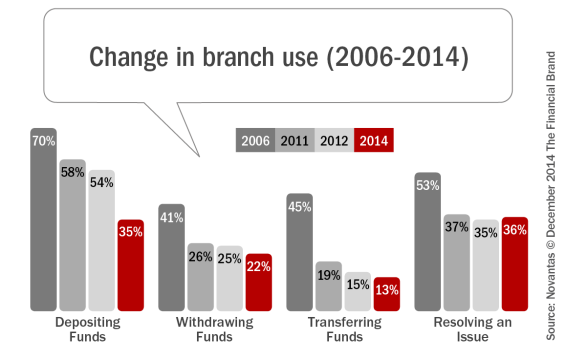 5.Wall Street Strategists Playing it Safe in 2017…That Means it will be Big Upside or Downside Year? 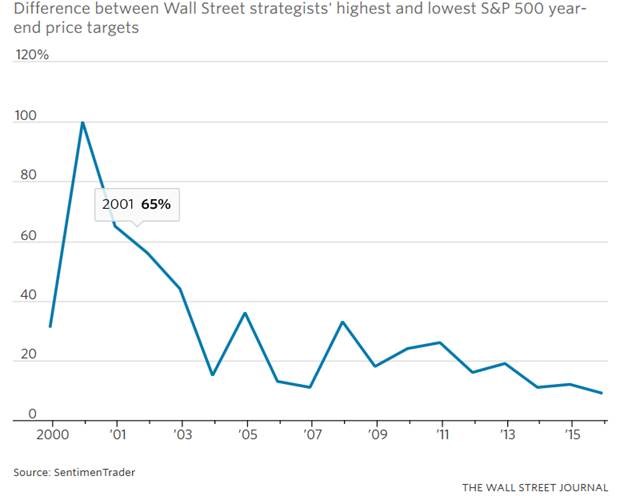 At the high end is RBC’s Jonathan Golub, who forecasts 2500 by year-end. On the other side, David Kostin at Goldman Sachs Group Inc. and Bank of America Merrill Lynch’s Savita Subramanian are among several strategists with targets of 2300, just a slight rise from the end of 2016 – The gap between the most optimistic and pessimistic forecasts is just 9%, the smallest on record dating back to 1999, according to Jason Goepfert, founder of Sundial Capital Research.

Thanks to Dave Lutz at Jones.

United States: According to the Conference Board, US consumer confidence is now at the highest level since 2001 (right before 9/11). Will this trend translate into spending? 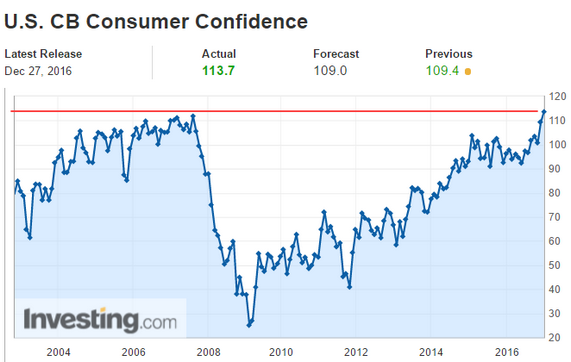 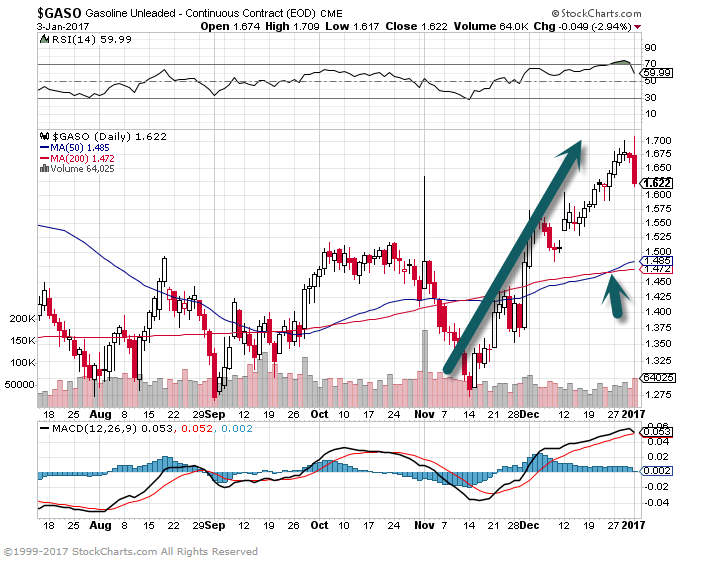 The following ETFs and ETNs have been launched in 2016:

10. A 4 Step Guide to Mental Toughness

In the 1930’s FBI agents needed mental toughness to hunt bank robbers like John Dillinger and mobsters like Al Capone.

It’s no secret that business and life are not as simple as they were, either—even a few years ago. It is no longer just a matter of knowledge, ability, and skill to succeed.

As entrepreneurs and business owners you need to be psychologically prepared to deal with strong competition, recover from mistakes and failure quickly, tackle tough situations, devise strategies, and collaborate with others.

In other words, you need mental toughness to manage the emotions, thoughts, and behavior that will set you up for success in business and life.

People define mental toughness in different ways. Often, they think it is plowing through obstacles and roadblocks. While that mindset might work in football, it is not an effective way to succeed in business and life.

Here is a complete beginner’s guide to mental toughness:

Most of the FBI agents I worked alongside would never sputter the phrase emotional intelligence—much less attribute their success to it. While they considered themselves mentally tough, they preferred words like competence and alertness to describe the skills they carefully honed over the years.

I prefer the term emotional competency rather than emotional intelligence. I know of lots of people who are intelligent but not necessarily competent. Competency requires more than just information; it requires the practical wisdom to put that knowledge to work in real life situations.

To be mentally tough, you must know what you feel down deep in your bones. If you are not pursuing something that really holds value and meaning for you, you will not have what it takes to keep going when the going gets tough.

If you are self-aware, you have clarity about your values, operate from a place of authenticity, and go after the things in life that are hard-wired to give you a purpose.

To be successful, match your personality to your boss, employee, or client. Assess whether they are introverts or extraverts, analytical or a visionary, purpose-driven or security-driven, goal-oriented or people-oriented. If you’ve been a good listener, you will be able to make these distinctions.

Sometimes we don’t really want to hear what other people have to say! We love our own opinions and thoughts and would prefer to shut out those of others.

Once we close down, however, we risk becoming judgmental and opinionated. More importantly, we miss out on what others have to share with us.

The ability to pick ourselves up when life knocks us down is called resilience. In today’s competitive culture, resilience has become a critical skill because it takes more than talent to succeed.

Resilient people do not blame others, whine, or complain about how unfair life is. Yes, life can be unfair but that is no excuse to give up.

As a new FBI agent, I learned to be bold, take risks, move into my discomfort zone, and put myself out there, even when scared to death of what I might face. The way in which we adapt to overcome our adversity determines how we will achieve success.

More than talent, more than education, more than experience, the ability to bounce back from setbacks determines who will succeed and who will fail. That is true in the classroom, in sports, and in the boardroom.

Here’s a breakdown of resilience:

Lack of confidence can rear its ugly head at any time. No one is immune because we are most vulnerable any time we’re out of our comfort zone or experience change in our life. We must face our fears. If we have confidence in ourselves we are not afraid of how others perceive us, afraid of commitment, or afraid of failure.

Confidence is a critical building block for a successful career because it is the one mindset that will take you where you want to go.

But failure can be very beneficial for building confidence because it allows you a perfect opportunity to 1) learn why things went wrong, and 2) see how you can make adjustments next time.

When learning how to make an arrest or interview a terrorist I needed to take risks, fail, and learn from my mistakes as much as possible before I found myself in the actual situation.

If you think you never make mistakes, you are a narcissist—either that or stupid. But if you are humble and self-aware, you recognize that taking risks, making mistakes, and failing will help you understand that there is always something you can do to be better.

It’s tempting to give up and not try for anything beyond the predictions and admonitions of others. While many of these people are well-intentioned, they feed negative, limiting, and inaccurate narratives about what it possible once you put your mind to it.

If the instructors at the FBI Academy were not pushing us past our self-limiting beliefs, they weren’t doing their job.