1.The Total Collapse of VIX-Volatility Index 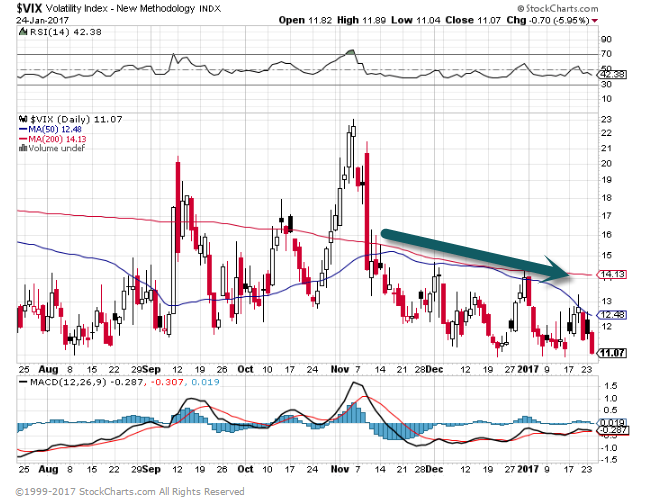 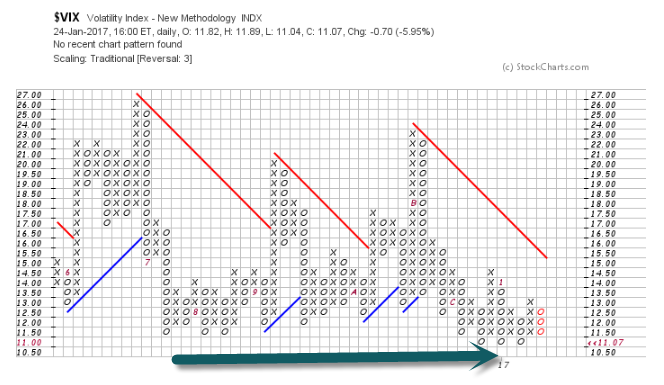 2.Nick Colas From Convergex on VIX.

QOTD: Nick Colas on the Vix

The below, via my friend Nicholas Colas, chief market strategist at Convergex, a global brokerage company based in New York:
The general sentiment on the Convergex trading desks continues to be bearish, so today we’ll review seasonal patterns for the CBOE VIX Index going back to its starting point in 1990 to see what that math says about current market risk. Over the last 27 years, the VIX has tended to bottom in three specific months: January (15% of the time), July (22%), and December (30%). When the VIX does bottom in January, its average low reading is 12.2; today’s close was 11.9. That doesn’t guarantee that we’re at the lows on the VIX for the year, but given January’s propensity to represent an annual low it does merit your attention. And since changes in the CBOE VIX index are strongly (and negatively) correlated to equity market returns, this is a warning sign about the near term direction of US stocks.
A reading of 11.8 is more than one standard deviation away from the VIX’s long term average of 20. Additionally, the VIX rarely goes below 10. Statistically, 11.8 is an unusually low reading for the VIX.
Josh here – with a lot of the “Trump Trade” nonsense starting to unwind (the banks are down 2%ish over the past week and bonds caught a bid), don’t be surprised about having a two-way market going forward. The honeymoon never lasts forever post-election.
Source:
Make Stocks Volatile Again
Convergex – January 23rd, 2017

QOTD: Nick Colas on the Vix

With the S&P 500 once again in record high territory, today’s chart provides some perspective on the current rally by plotting all major S&P 500 rallies of the last 86 years. With the S&P 500 up 107% since its October 2011 lows (the 2011 correction resulted in a significant 19.4% decline), the current rally is above average in magnitude and the second longest rally since the Great Depression

Notes:
– A major stock market rally has been defined as a S&P 500 gain of 30% or more (following a correction of at least 15%).
– The S&P 500 was not adjusted for inflation or dividends.
– Selected rallies were labeled with the year in which they began.
– There are 252 trading days in a year (100 trading days equal about 4.8 calendar months).

4.On Price/Book Basis Europe is Cheap Relative to U.S. and World. 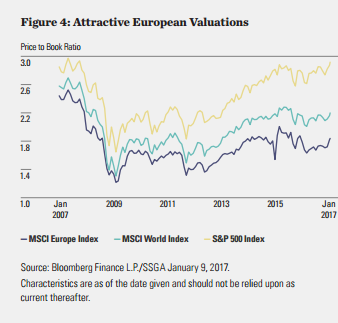 5.Global Dow Index About to Break to New Highs….Will We See Reversion to Mean with International this Year? 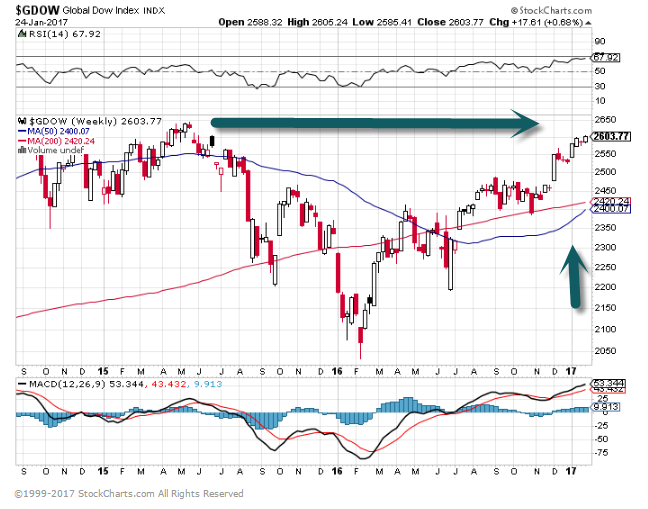 The performance spreads in December of 2001 were fairly similar to the ones we see today. Those numbers had completely reversed by 2006 and stayed that way through 2010 until coming full circle today.
Despite these cyclical differences if you looked at the 15 year returns of these funds since 2001 they weren’t all that different:
United States +7.8%
International +6.3%
Emerging Markets +7.3%
www.pragcap.com

6.Another End of World Prediction is Not Playing Out…European Banks Rally.

http://www.marketwatch.com/story/banks-propel-european-stocks-to-12-day-high-after-santander-earnings-2017-01-25
Read earnings round up 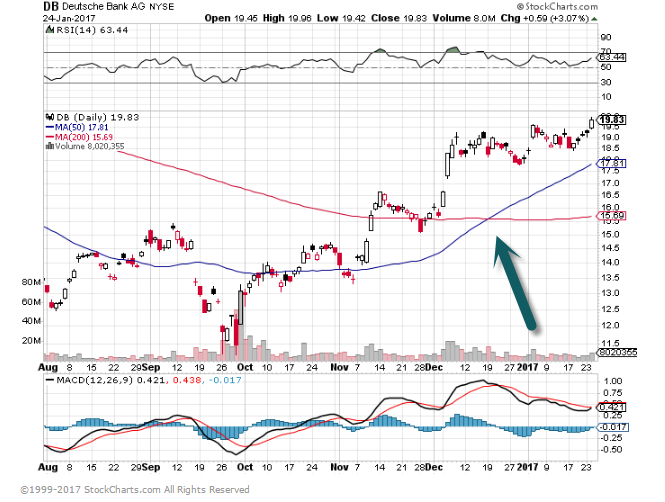 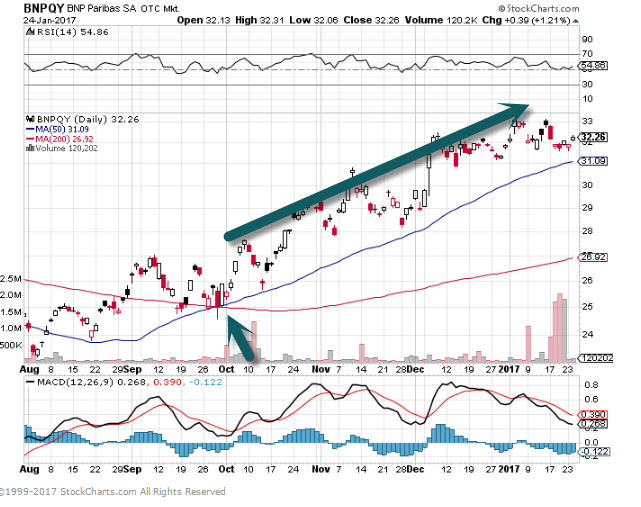 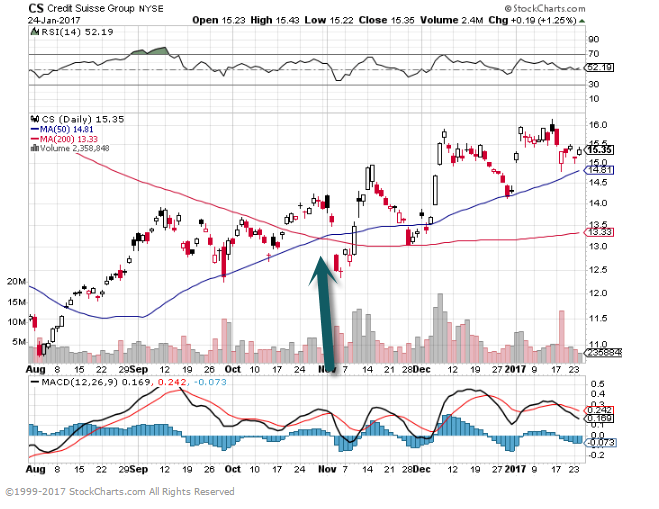 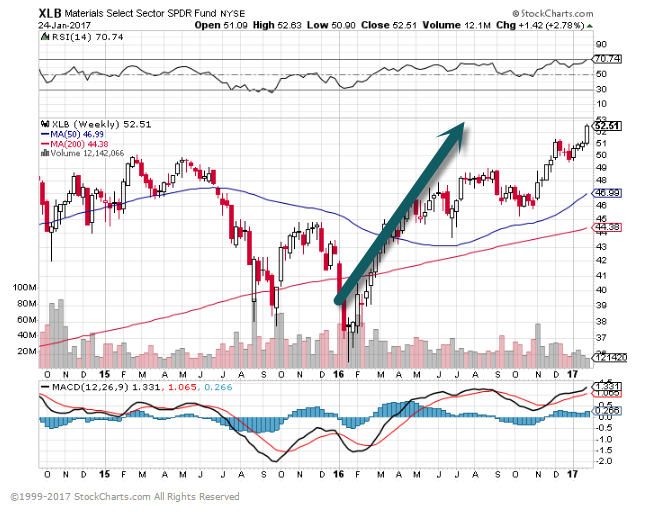 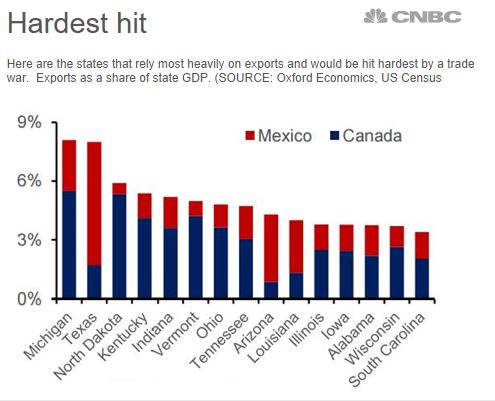 9-10.7 concrete steps you can take to radically improve your life this year

· Elle Kaplan, Inc.
Create radical change this year.Ben A. Pruchnie/Getty Images for lululemon athletica
Now that the holiday craziness has finally quieted down and we are settling back into our daily routines, it’s the perfect opportunity to make this your best year of all time.

It might seem like a pipe dream, but it is within your grasp to create radical change this very year. That it’s possible has been scientifically proven, and plenty of entrepreneurs have done it before.

Following these seven steps will help you become very best version of yourself in 2017:

Ah, New Year’s Resolutions. They sound great on paper, but if we’re being brutally honest, many of us have probably already had a slip up (or ten). If you’re having trouble, you’re not alone — studies have found that only 8 percent of people actually accomplish them.

To become an exception in 2017, you need to get specific. Science has found that people who state when and where they’ll accomplish their goals have double the success rate for achieving them. For instance, you’re no longer going to “lose weight”; you’re going to shed 30 pounds this year by exercising daily after work.

To the ultra-successful, a goal isn’t a vague aspiration; it’s a specific action with concrete steps.

2. Learn how to (actually) recharge

Fatigue. Insomnia. Health problems. Lost concentration. Those are just some of the symptoms of burnout, which plagues millions of workers every year.

If you’re feeling stressed and overworked, this is the year to finally end it for good. Harvard research indicates that “Our brains need a rest as much as our bodies do.” And the best way to do this is to actually unplug before and during work.

Consider actually leaving work by not checking your email, and focusing on something relaxing instead. During the workday, take a break every hour or so, and even take a walk outside.

You don’t have to own a business (or even work in a startup) to be an entrepreneur — being an entrepreneur is a mindset, and if you aren’t thinking that way already, it’s time to get on board.

According to Forbes, “being entrepreneurial is essentially about thinking and doing something that we have not done before. It is about assessing a situation, designing alternatives, and choosing a new way — or perhaps a combination of ways .”

You do not need to invent a new app to be innovative — just start thinking outside of the box. Start trusting your instincts and thinking bravely — you have the entrepreneur in you, you just have to be willing to give it a try.

Reading might not seem like a big deal, but extensive studies on wealthy and successful individuals have found that they all read voraciously. Even Warren Buffett has told people they need to “read 500 pages a day” if they want to become successful.

With even 20 pages a night, you can become a constant learner, and reap the benefits of expanding your mindset and your knowledge. If you’re looking for some book choices, luckily the ultra-successful aren’t shy about sharing their favorite reads.

…And I’m not just talking about romantic ones. The power of people is immense — and their influence on us is even bigger. The New York Times found that friends can have a bigger emotional impact than your spouse, and that negative ones can drag down your entire life.

When you look out at your own audience, who do you see? Is the front row cheering for you? Are they helping you reach your goals? Do they inspire you?

It is time to let go of the people in your life that are not routing for your success — and if you can’t let them go, it’s definitely time to stop worrying about them.

6. Practice being your future self

Quite simply, to become that ideal, future version of yourself, you need to practice being it in 2017.

According to Peter Bregman, CEO and leadership expert, in the Harvard Business Review, “You need to spend time on the future even when there are more important things to do in the present and even when there is no immediate apparent return to your efforts.”

Whether you want to get in better shape or start a business, it’s not going to happen overnight. Instead of waiting for this change, start prioritizing and scheduling bite—size improvements today, no matter how busy you are.

This is your year. No matter what you are reaching for, whether it be a promotion, a new business venture or a healthier lifestyle, keep on at it until you get there, because you need to be your best cheerleader.

The good old saying of “mind over matter” hasn’t stuck around for no reason — have it in your head that you will achieve your goals this year, and when you get to an obstacle, find a different route. Everything in life seems impossible, until it isn’t.