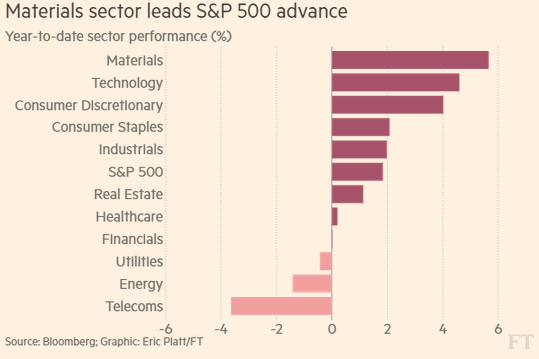 XLB Breaks out of 4 Year Range. 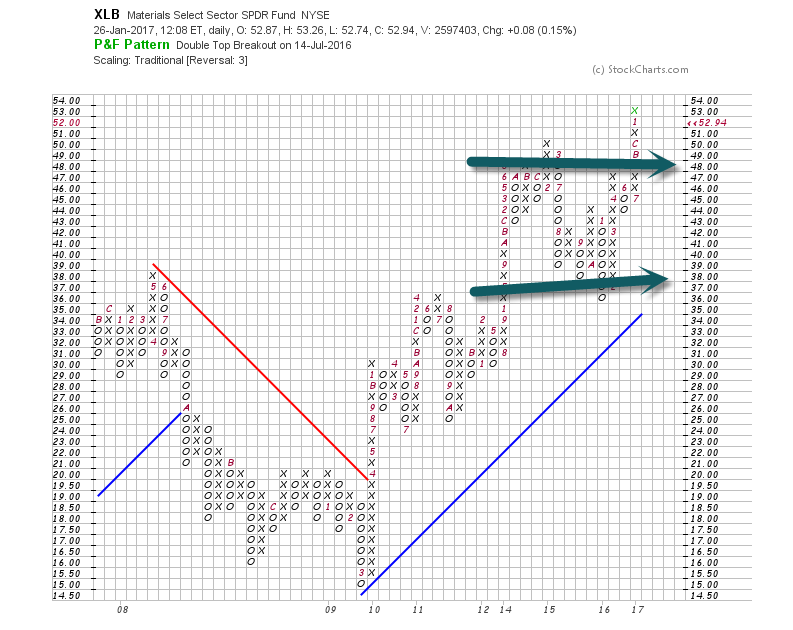 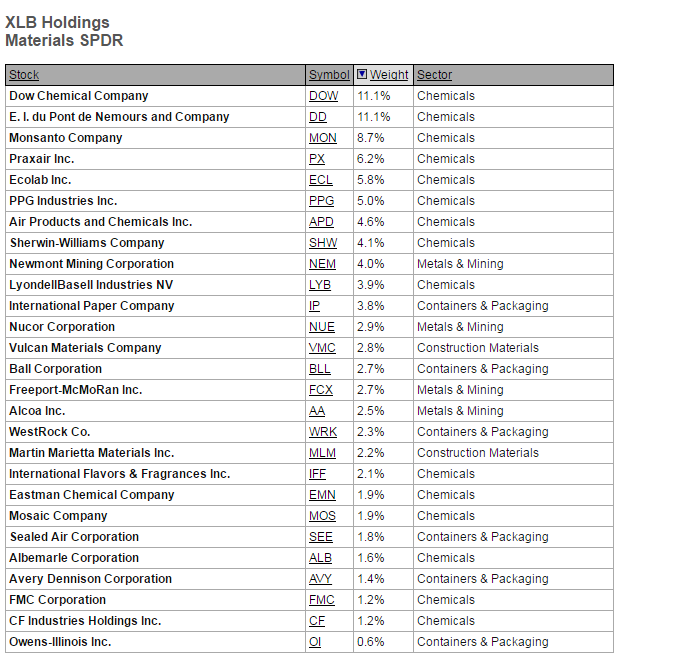 Both the U.S. and Mexico have benefited from the controversial trade agreement that went into effect under President Bill Clinton in 1994, but Mexico has arguably been the bigger winner.
After running a trade deficit with the U.S. from 1991 to 1994, Mexico moved to a surplus in 1995, and that’s been the case ever since. Mexico has become a major producer of automobiles, electronics and appliances, to go along with its status as a large oil exporter.
As a result, U.S. imports from Mexico soared from $65 billion when the North American trade deal was passed to around $295 billion in 2016.
The U.S. has been helped, too, especially in border states such as Texas. Exports to Mexico have climbed from $68 billion in 1994 to an estimated $235 billion in 2016.
As Trump pointed out, though, the U.S. is on track to run a trade deficit of close to $60 billion with Mexico in 2016, according to government data. That’s about 12% of the nation’s overall annual trade gap. 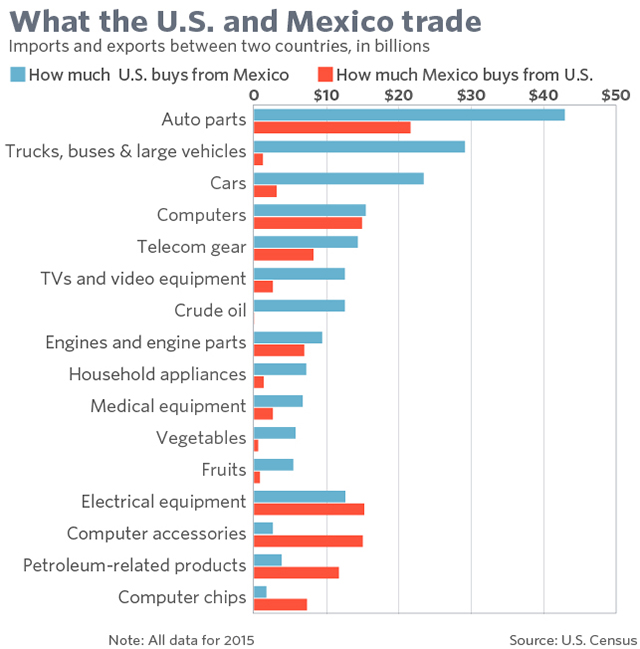 3.Short-Term Consensus Bulls on S&P 500 are in the 90th Percentile.

4.The Great 2008 Hangover….Sell Side Never Got Overly Bullish.

5.Torsten Slok with Charts on Rates and Credit Growth.

We are watching very carefully the impact of higher rates on the economy, and there are some signs that the move up in rates in recent months is having a negative impact on the economy, see the first chart below. The slowdown in credit growth is not dramatic, see the second chart, but the sensitivity of the economy to higher rates continues to be a topic that comes up in my client conversations at the moment, and many clients I talk to believe that the economy and the stock market will not be able to handle a Fed funds rate at 2% or 3% and 10-year rates at 3% or 4%. The biggest organic risk to the view that “rates will be low forever” is an upside surprise in inflation, see also the third chart and my latest monthly chart book. 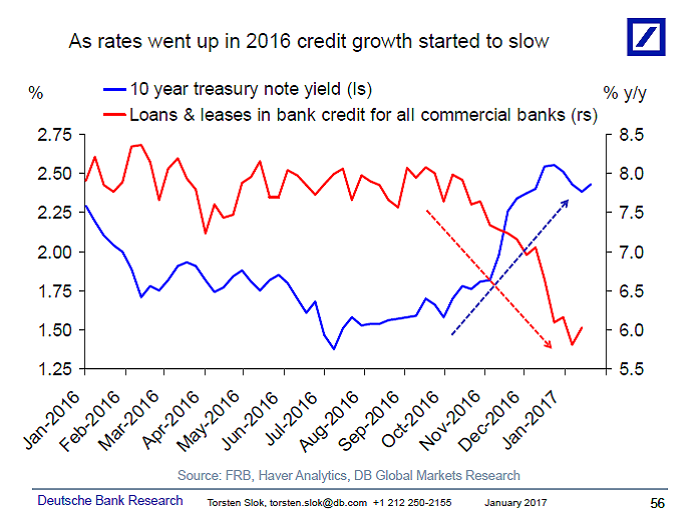 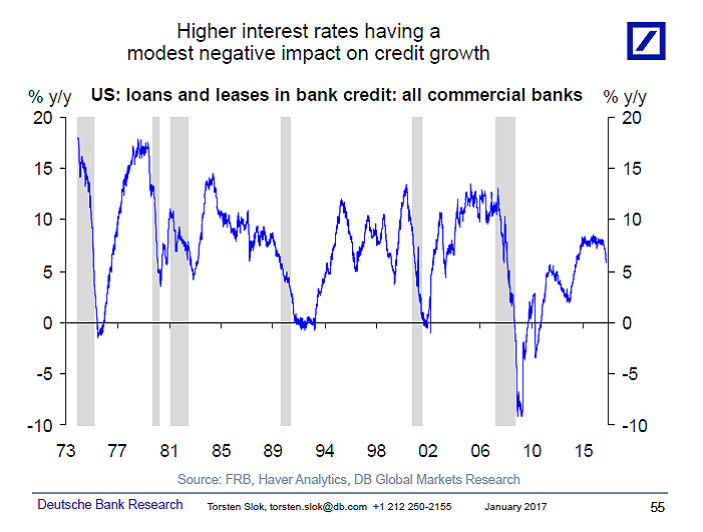 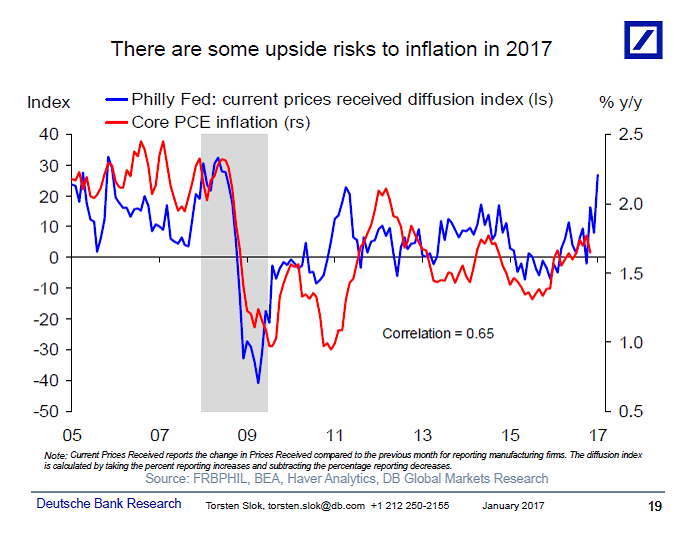 GOT JUNK?– Investors’ appetite for the lowest rated segments of the corporate debt market touched a fresh peak on Wednesday, when a triple-C rated company came close to selling bonds with a yield of just 6 per cent. Last February, triple-C paper traded with a yield of 18.57 per cent, according to Bloomberg Barclays Indices. That figure has nearly halved to 9.36 per cent today. “Triple-Cs are routinely pricing at 7 per cent or less. The compensation you get paid to take risk is getting narrower and narrower, much like in 1997-98 and 2004-2006.”
Stats from Dave Lutz at Jones.
High Yield ETFs 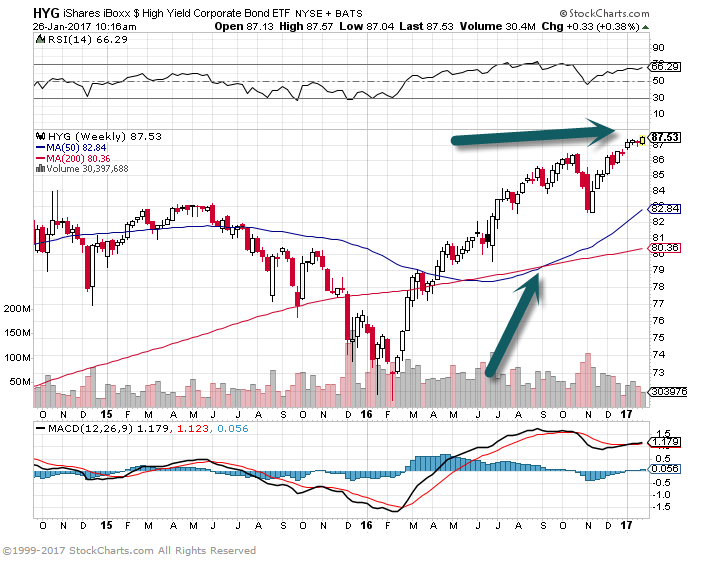 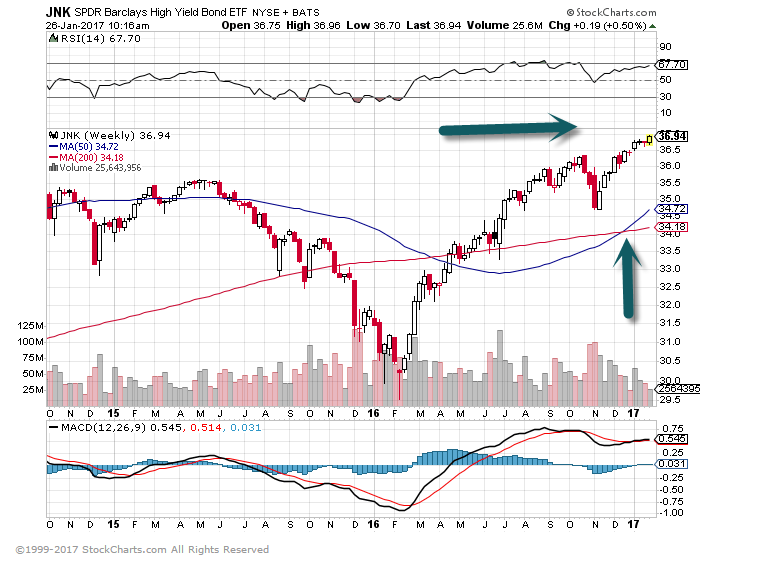 From Mike Nolan at Janney Letter.
One of the biggest drivers of equity bull markets are demographics. Despite all the mixed emotions society has towards the millennial generation it is more likely than not that this group will do the same thing that all those generations before them have… buy homes, buy cars, form families, save for retirement, etc. This means more people consuming more things. Those peak spending years come during their “nesting” phase. They may be doing these things later in life, but they are also living longer. 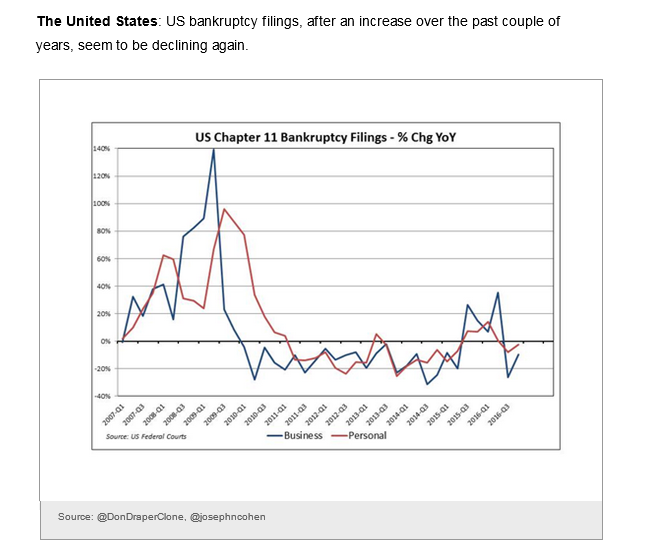 9.Read of the Day…. In the past five years the profits of multinationals have dropped by 25%
The multinational company is in trouble

10.It Took a Successful NBA Coach Only 2 Sentences to Drop the Best Advice You’ll Hear Today

Quit looking at others and focus on this.

In 2013, the Boston Celtics took a chance when they hired unproven 36-year-old Brad Stevens as the team’s head coach. Since then, Stevens has helped turn the storied franchise around, taking the Celtics from the bottom of the pack to the third best team in the Eastern Conference (at time of writing).
So, how does Stevens stay focused, in a league that has been dominated by just a few superpowers in recent years? In a recent interview, Stevens summed up his philosophy in two short sentences:
“I’m not even thinking about any other team. We’re trying to be the best version of ourselves.”
Stevens’s doctrine should hit home for most of us. It’s much too easy to compare ourselves to colleagues, friends, and family members — in respect to everything from our current job title to the type of car we drive.
But there are many reasons you should resist comparing yourself to others.
Here are three of them:
It feeds “the envy animal.”
It’s easy to stay positive when you cultivate an attitude of appreciation. In contrast, putting too much emphasis on others is dangerous — because there will always be someone who’s more skilled or who has more than you, at least in certain areas.
When you instead focus on your own strengths and resources, you can maximize these and be motivated to give your best effort.
The process matters.
Learning from others can be useful…to an extent. But it takes time for good ideas and hard work to reap rewards. Any success you see from friends or competitors was no doubt preceded by repeated failures and a long struggle — much of which you’re either forgetting about or unaware of.
Don’t rob yourself of your own payoff by comparing yourself to others. Instead, keep your head down, work hard, and stay consistent. Good things will come in time.
You need to define success.
Remember: You need to define what success means to you.
I once had a friend whose career took off quickly. She was happy with her company, her position, and her overall quality of life — until she started comparing herself with friends who seemed to be climbing the ladder a little faster than she was. Those constant comparisons made her really question her worth.
But a mentor advised her to refocus on the positives in her life and quit comparing herself with others. She quickly regained her joy and has thrived ever since.
While you may believe that others are doing better than you, you might not feel the same if you knew their whole situation. And in reality, their achievements have nothing to do with your happiness.
So, take time to define what’s important to you. Is it doing what you love? Providing value to others? Having enough time for friends and family?
By figuring out what really matters, and then sticking to those priorities, you become the best version of yourself.
And that’s what I call success.