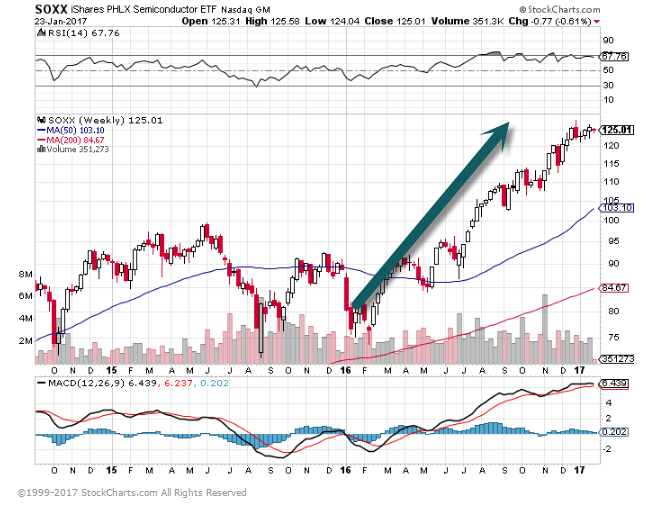 The iShares PHLX Semiconductor ETF (SOXX) has $660 million in assets. Exposure is primarily in semiconductor stocks (87% of assets), while semiconductor equipment stocks (13%) like Applied Materials (AMAT) are much less represented. In addition to U.S. stocks, the ETF has exposure to companies based in Singapore and Taiwan, The ETF trades on average 515,000 shares on a daily basis and has a 0.48% net expense ratio.

To better gauge the market’s future returns, investors should look at another measure of valuation: At the end of last year, the total value of U.S. stocks was an estimated 169% of gross domestic product. That compares with 85% at the end of 2008, and is approaching the 177% valuation the market hit at the end of 1999.

www.renmac.com
Reach out to Eric

For readers who have not seen my China ETF box….Outside of the margin bubble in early 2015, China has been in a 7 year range. 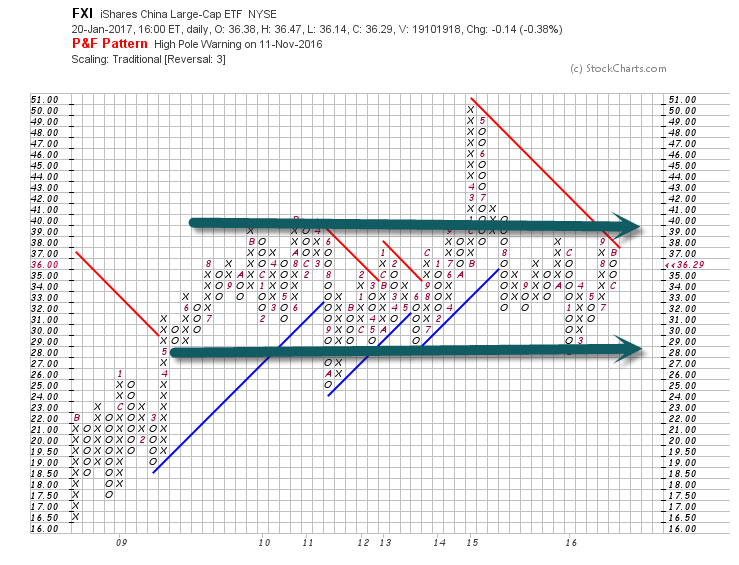 5.Do Profits and Wages Rise Together?

An important psychological shift is taking place in the US economy

· Jean Boivin, The BlackRock Blog
The recent jump in global bond yields represents a reflationary reawakening just a year after deflation and recession fears were dominant. Is this another false dawn? We don’t think so. This is an important psychological shift for investors previously obsessing over downside risks to growth and inflation, typified then by the talk of “secular stagnation” and “liquidity traps.”
The latest trend started in July when bond yields bottomed at record lows. Signs of a global growth pickup stoked the more confident mood, as did Donald Trump’s surprise U.S. presidential victory. We believe this reflationary phase, which central banks have been trying to achieve with years of ultra-easy monetary policy, has further to run.
Wage growth, long missing in the post-crisis expansion, is a crucial part of the reflationary dynamic, as we write in our new Global Macro Outlook Waking up to reflation. U.S. wage gains are feeding higher inflation and solid consumer spending, supporting profits in the face of rising labor costs. We believe companies have scope to tolerate even higher wage inflation in a stronger growth environment, either by hiking product prices or through a modest decrease in profit margins. Our analysis shows that profits can improve even with rising wages—indeed, this is a hallmark of reflationary economic phases, as the chart below shows. 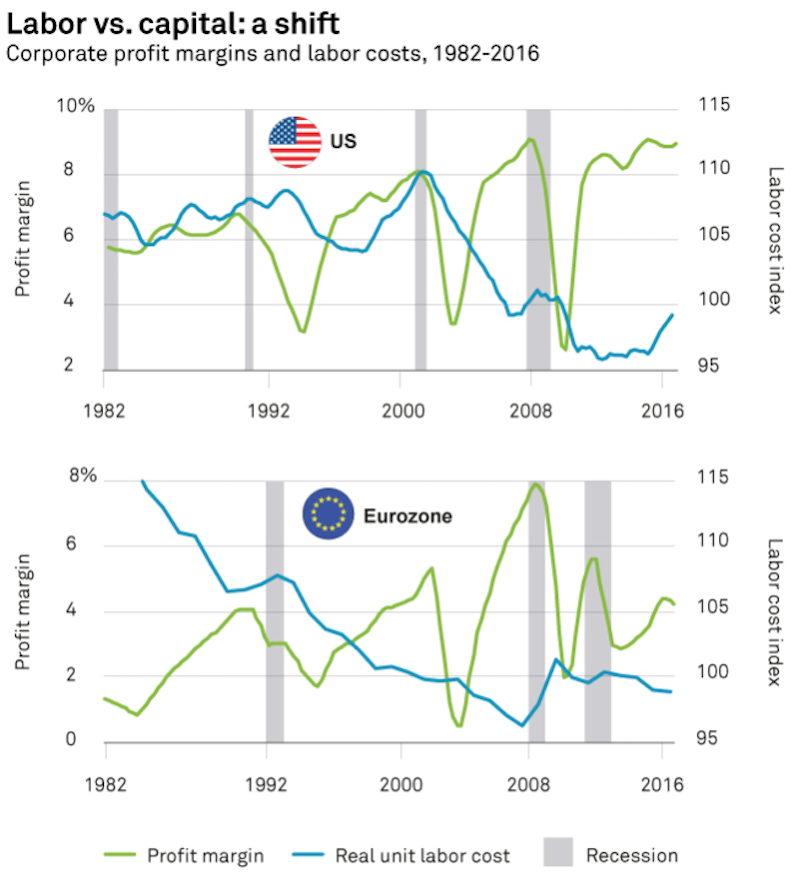 BlackRock
Wages and profits can, and typically do, rise together during the reflationary phase of economic expansions. In the U.S., this was the case in the late 1980s, late 1990s and the mid-2000s. The key ingredient? Solid and rising aggregate demand.

The lack of stronger wage growth was a root cause behind fears of the U.S. economy’s fragility and the downside risks to inflation. Thus, it would be misleading to think that rising wages have a direct link with subsequent economic downturns. Economic cycles do not die of old age, as the Federal Reserve has repeatedly noted. In this case, we see no reason to believe that the seeds of reflation will sow the expansion’s demise just now. Most recessions can be explained by a sudden hit to aggregate demand, either due to some external, financial or policy-related shock.

A glut of used vehicles has started to depress prices. That trend will intensify as Americans will return 3.36 million leased cars and trucks this year, another jump after a 33 percent surge in 2016, according to J.D. Power. The fallout has already begun, with Ford Motor Co. shaving $300 million from its financial-services arm’s profit forecast for this year.

“Ford is the canary in the coal mine,” said Maryann Keller, a former Wall Street analyst who’s now an auto industry consultant in Stamford, Connecticut.

This drag may be hitting the rest of the industry, too. A National Automobile Dealers Association index of used-vehicle prices declined each of the last six months of last year. If used values weaken more than anticipated, it can lead to losses across the industry, hitting carmakers, auto lenders and rental companies. 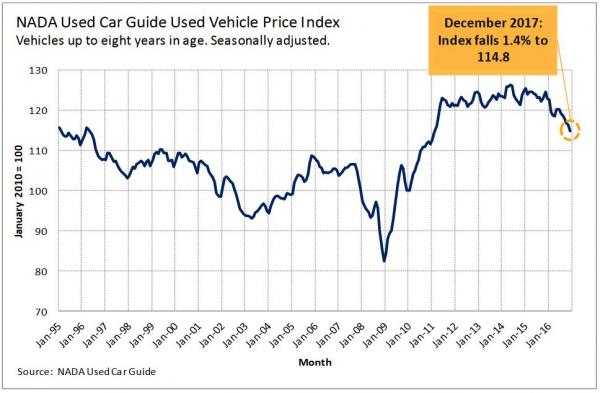 8.The United States: Single-family home turnover seems to be back at its historical average of just above 5%.

9.Read of Day…Seth Rodin Teaches a Sales Lesson Thru Election.

Almost no one
We may dream of the mass market, but the mass market doesn’t dream of us.
Almost no one visits your restaurant, almost no one buys your bestselling book, almost no one watches the Tonight Show.
Rare indeed is a market where everyone is active.
We think we’re designing and selling to everyone, but that doesn’t match reality. It makes no sense at all to dumb down your best work to appeal to the longtime bystander, because the bystander isn’t interested. And it certainly makes no sense to try to convert your biggest critics, because they’ve got a lot at stake in their role of being your critic.
Growth comes from person-to-person communication, from the powerful standards of ‘people like us’. And it comes from activating people who are ready to be activated.
The most recent Presidential election makes this clear: It’s the non-voting bystanders who are in the majority: 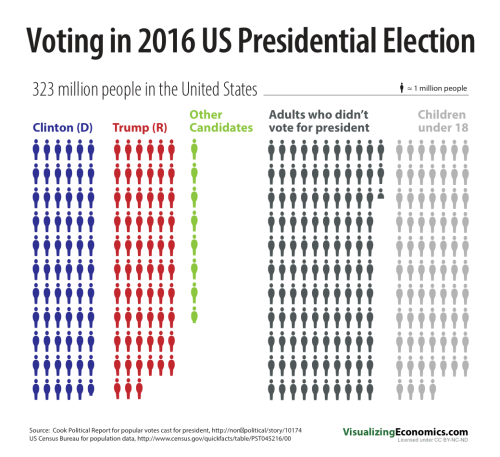 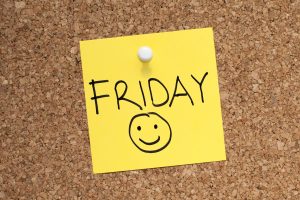 Don’t make the mistake of treating Friday like any other workday.
Having a specific and intentional routine on Friday will set you up for a relaxing weekend and a successful following week.
Follow this 4-step process every Friday to maximize your productivity and peace of mind:
1. Block off your calendar for all of Friday afternoon
This means not scheduling any meetings or calls after 12 noon on Friday (trust me, your co-workers will thank you for this), and declining all invites unless they are absolutely critical (e.g. mandated by your boss).
With some open space on your calendar, now you will be able to close out the week on your own terms.
2. Spend 2+ hours working on unfinished top-priority tasks
If there are still any major outstanding items on your weekly to-do list — specifically ones that will cause anxiety and stress over the weekend — now is the time to tackle them.
Find a quiet place to work where you won’t be interrupted, and spend a couple of focused hours on these top-priority tasks, completing them or getting them into a good place before the weekend.
Once progress has been made against these big items, you can turn your attention to the little ones.
3. Spend 1 hour cleaning out your inbox
Scroll through your entire inbox for emails or calls that slipped through the cracks during the week.
If sending a response or giving a quick call back will only take a few minutes, do it right away.
Consider whether some of these items really need to be done at all. If they aren’t that important — and you will never actually get around to doing them anyway — just delete now and save yourself the stress of seeing them again.
Do make a note of any items that are important and require more time to complete, and will need to wait until the following week. It can alleviate pressure (and is a nice courtesy) to take a moment to quickly respond, saying you’ll get back to them with a more in-depth answer next week. This leads right into the next step.
4. Write out your to-do list for the following week
With a clear understanding of where things are being left off with all big and little items, you can now prioritize what you will do the following week (and equally as important, what you will not do).
It is critical to take time on Friday to write out your to-do list for the next week. Your top priorities will be much fresher than trying to do this on Sunday night or Monday morning.
This will also give you the peace of mind to know that your top priorities have been captured on paper, and will enable you to hit the ground running the next week.
Limit your weekly to-do list to no more than 3–5 essential items.
And that completes the fourth step of the routine.
* I know I said this was a 4-step process, but there is a bonus step that might be most important of all.
5. Leave the office early
At this point in the day, you have made progress against your major projects, cleared out as many minor-but-necessary items as possible, and set yourself up for a successful week ahead.
With a highly-productive Friday afternoon in the books, it’s time to get out of the office early.
Even leaving at 4 or 4:30 p.m. will make your weekend feel significantly longer.
You deserve it!