A 10-year above 3%, with the 30-year yield approaching 4%, would also be trouble for the equity market because they would start to look like ‘real’ yields to investors. 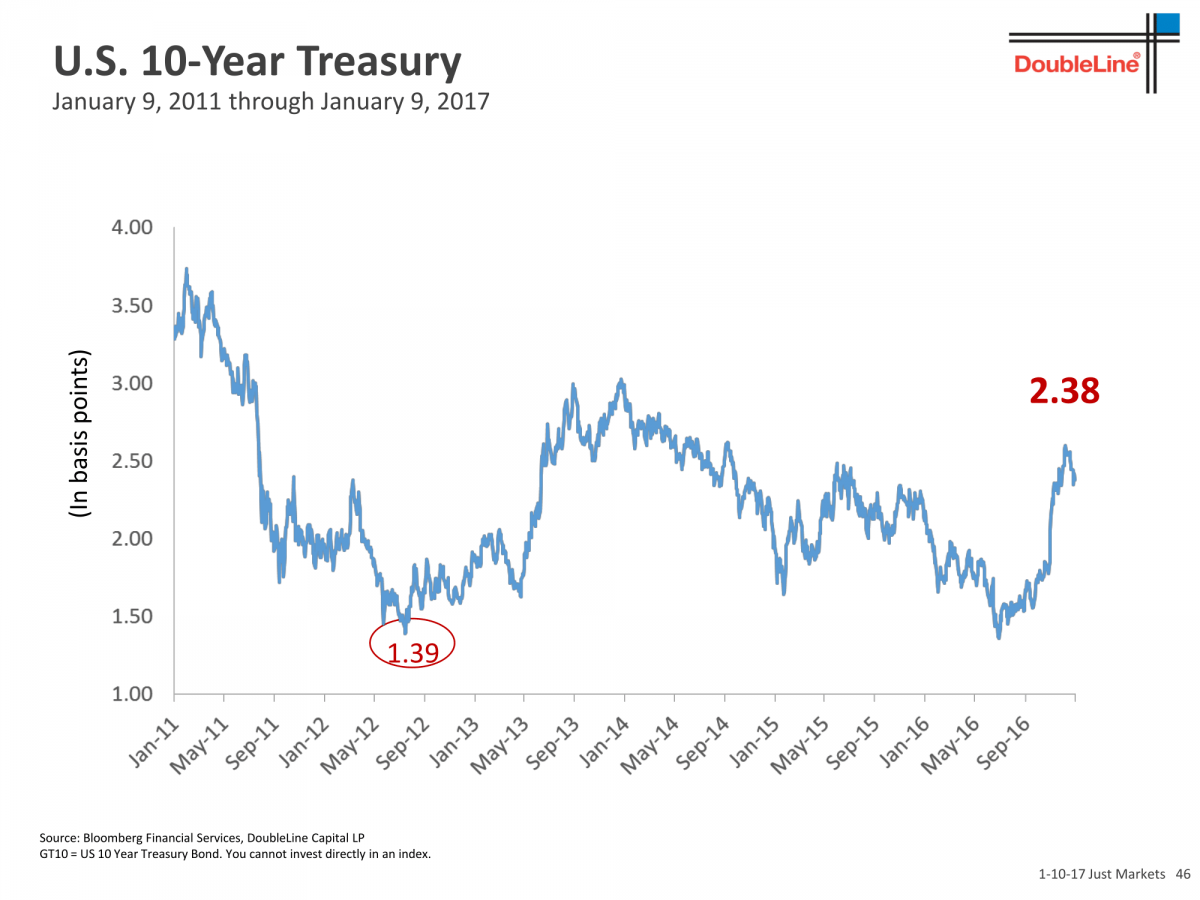 “Buy rumor sell news?” – Twits note stocks rose after Reagan elected; and got crushed after inauguration – Feels like many on the street are prepping for the same this year… 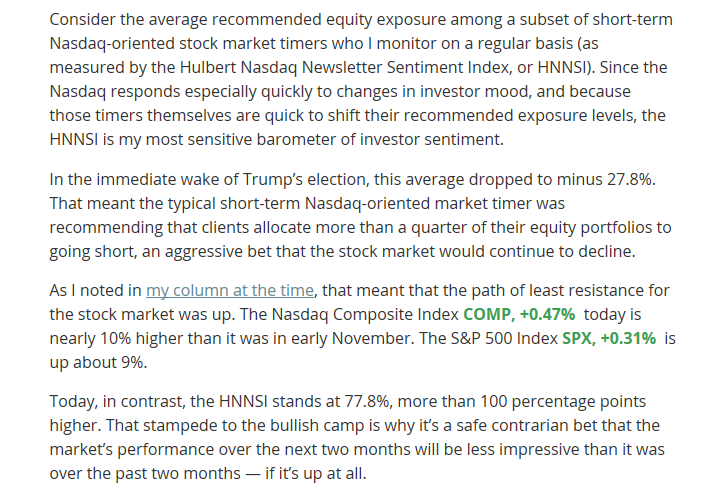 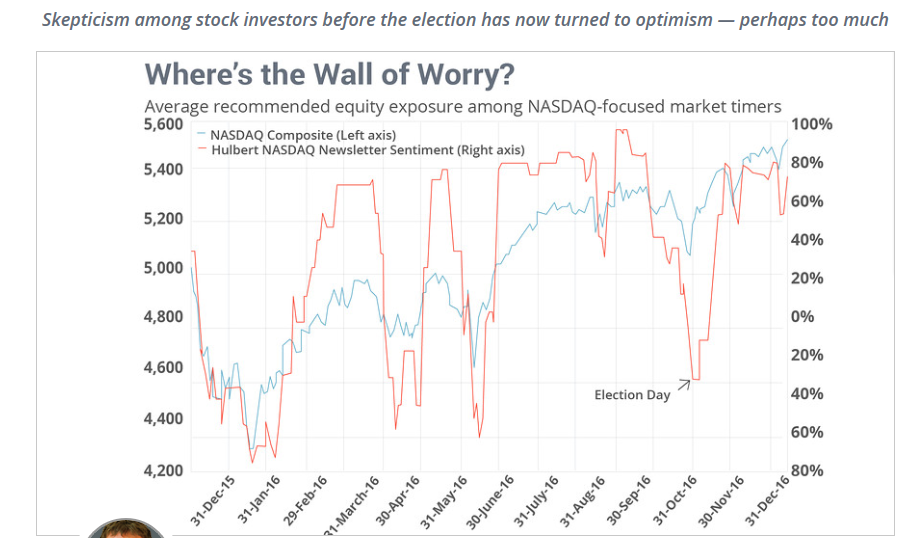 4.Mutual Fund Cash at Multi-Year Lows….Active Managers All In? 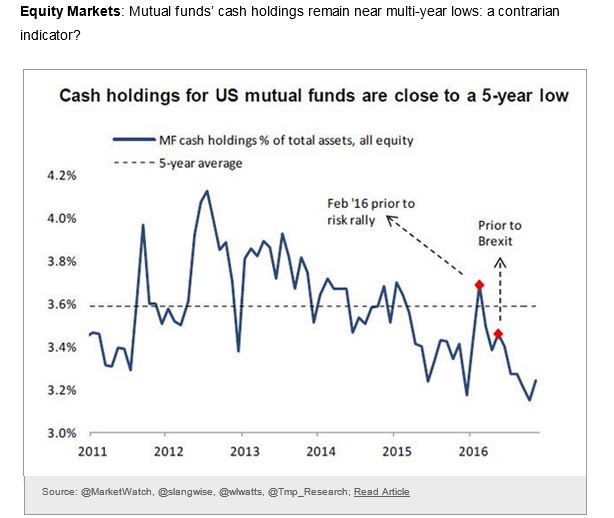 There isn’t much left to say about the explosive growth of exchange-traded funds that hasn’t been said already.

These funds, which simply track an index, have hoovered up assets at a high rate over the past decade. US-listed ETFs saw $283 billion in net inflows during 2016, taking aggregate assets under management to $2.5 trillion, according to Citigroup.

They are expected to benefit from the Department of Labor’s fiduciary rule, and it has been said that they could make up 60% of investments in the US in the next decade, up from 15% now. Mutual funds are fighting back by cutting fees and launching new ETF-like structures.

“Since 2010, ETF trading has routinely accounted for at least 25% of consolidated trading activity, compared to about 15% in the years leading up to the recent recession,” Goldman Sachs said in a recent note. “An even larger share of trading shifts to ETFs in high-volume and more volatile markets.”

According to Ana Avramovic at Credit Suisse, all but one of the most traded securities in 2016 were ETFs, with the SPY, which tracks the S&P 500, ranking top. 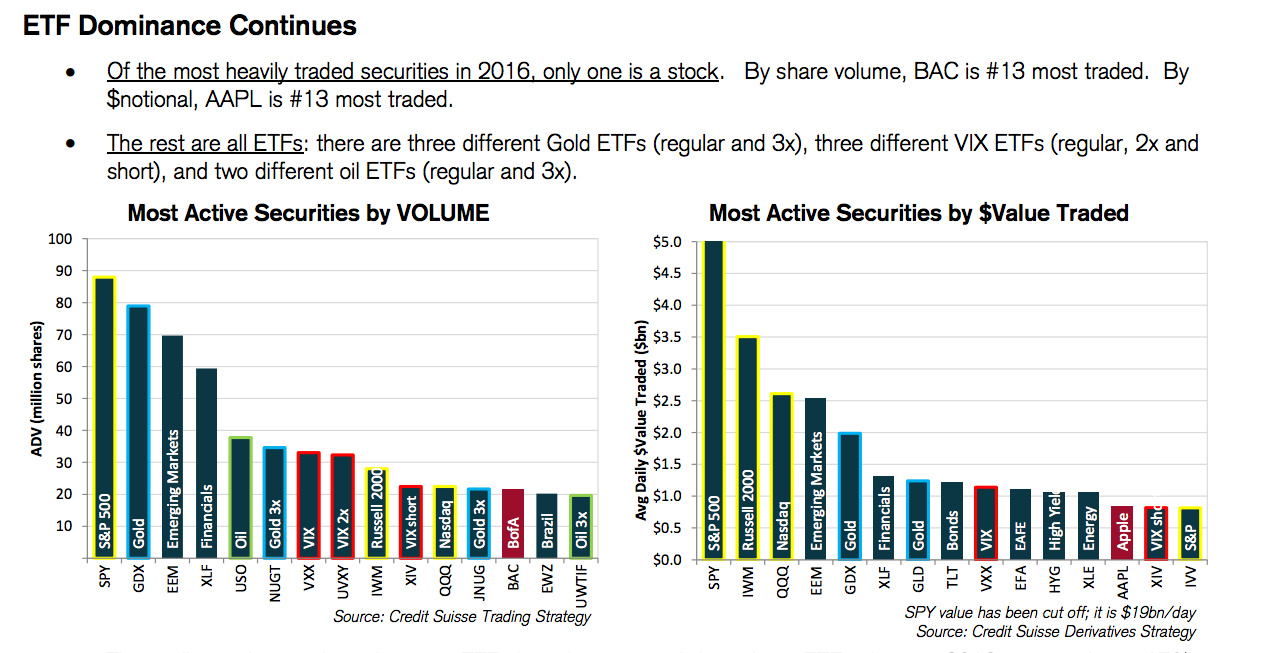 The SPY ETF is especially dominant. According to Scott Chronert at Citigroup, SPY drives over 25% of all US-listed ETF value traded.

“While many focus on the size of the US-listed ETF market ($2.5 T) and growing number of listed products (over 1,900), the fact is that ETF trading activity remains quite concentrated,” he said. 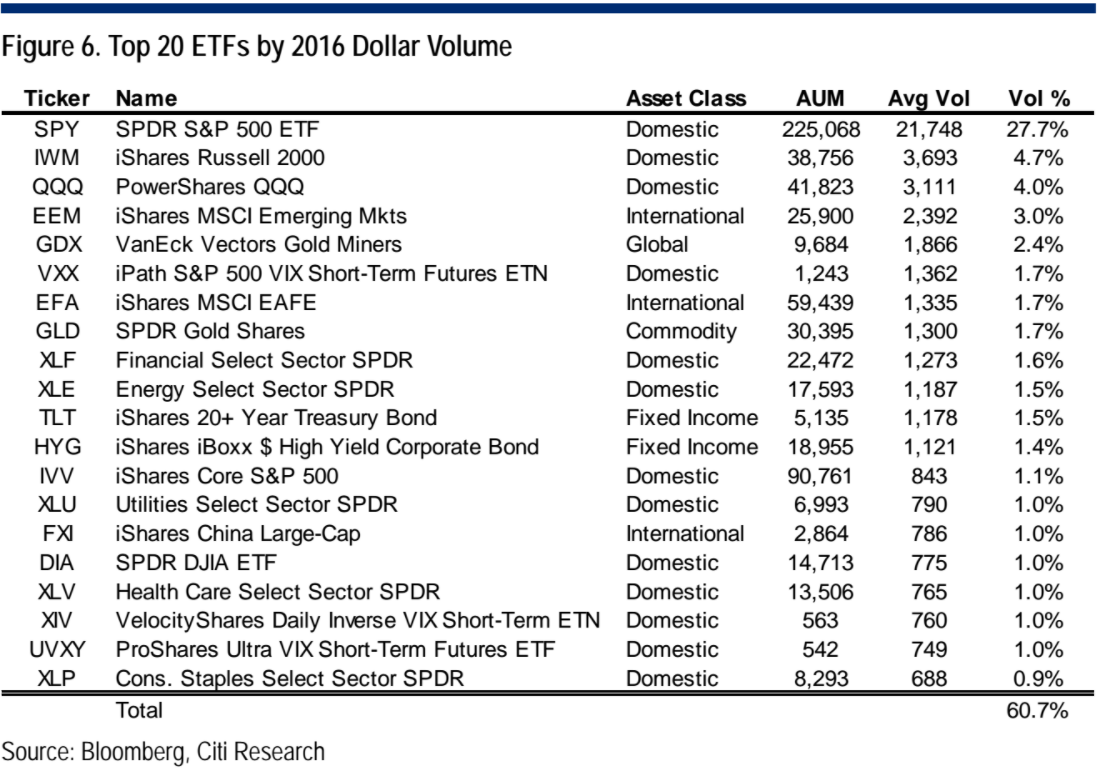 That is impacting the performance of certain stocks, according to Goldman Sachs, with intra-sector correlations, or the extent to which stocks in the same sector move in lockstep, increasing.

“This growing reliance on ETFs is dampening equity turnover, with turnover in passive funds just a small fraction of that of active funds,” the bank said. “Passive turnover has averaged just 3% per year since 2002, versus 32% for actively managed equity funds.”

“Lower turnover, combined with a higher share of equity assets now held in rules-based investment vehicles, means that it is likely to take longer for share prices to reflect new company-specific information,” the note added. 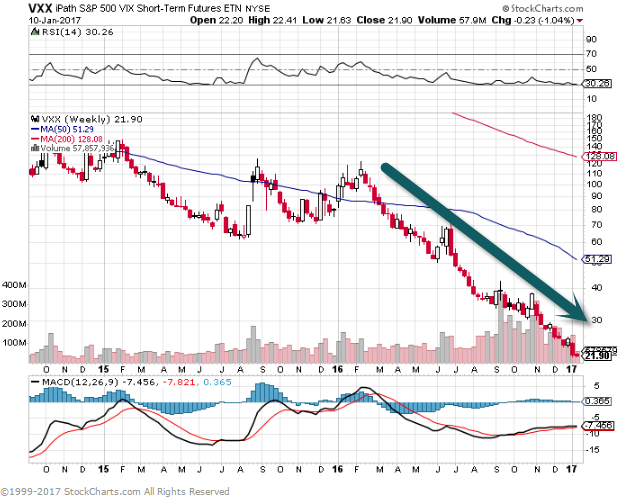 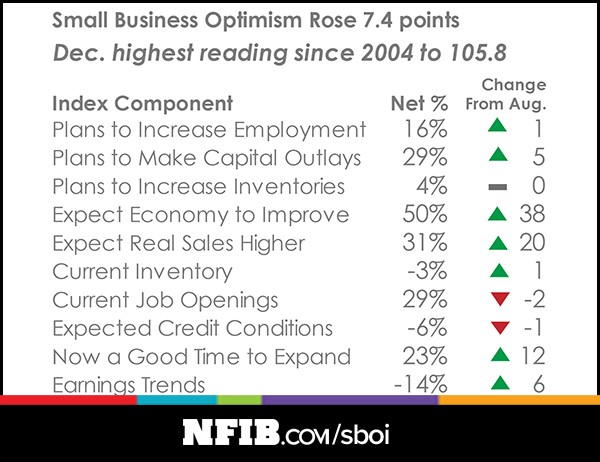 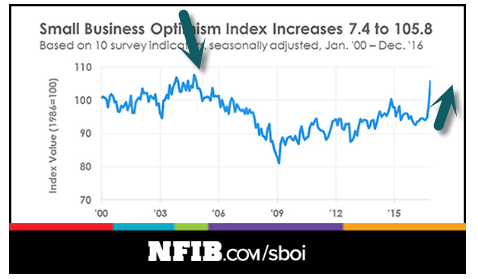 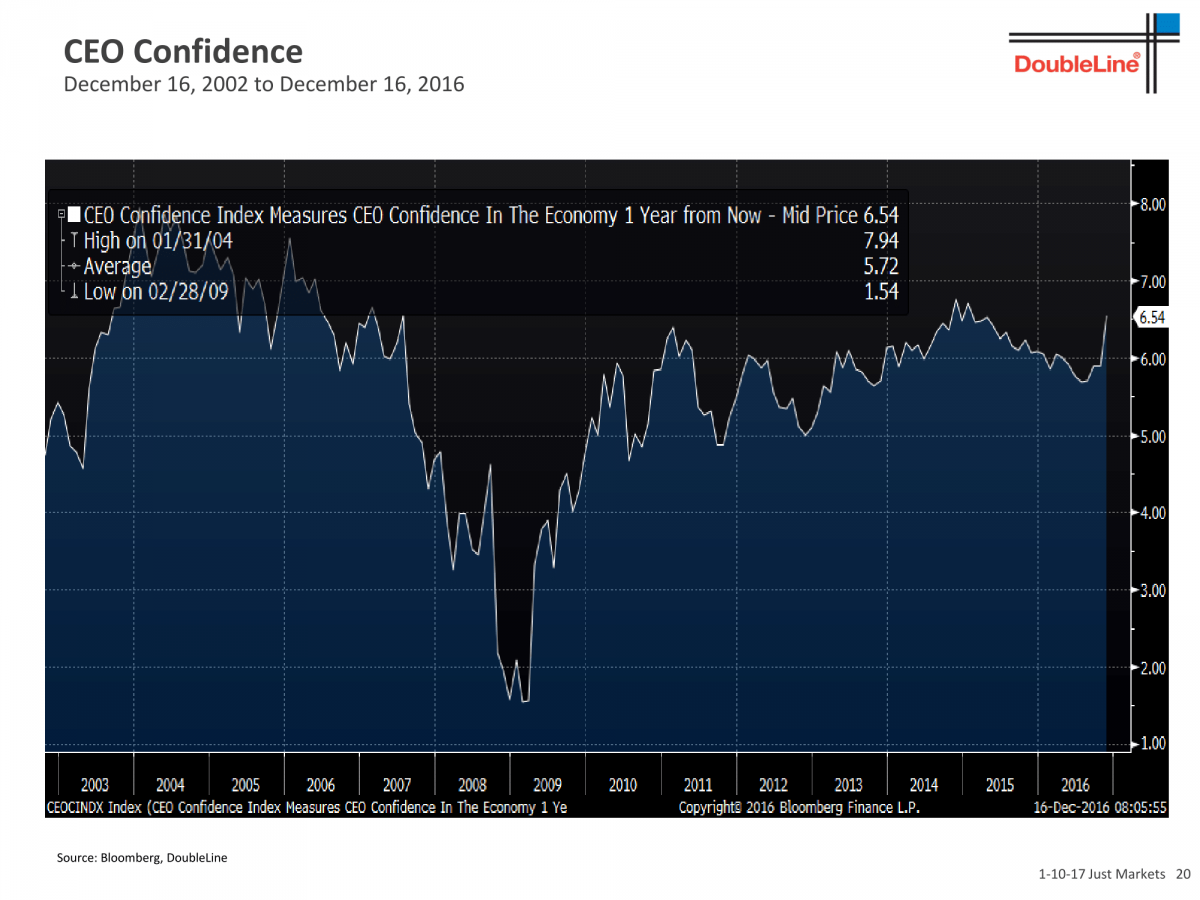 Relational Rules of a Power Over Culture are Deadly

The 7 Interpersonal Rules that Undermine Your Health and Relationships

Are you aware of the forces that guide you through life, that inform how you behave in different environments with different people?  The rules that tell you when to stand up to someone’s condescension and when to back off and ignore it.  The beliefs about how you respond to someone begging for food or money on the street.  For most, these behaviors and the decisions we make feel spontaneous and clear, as if they are an innate part of who we are.  But, in large part, the messages that guide our behavior come from outside of us – from the cultures we are embedded in.

Rule #1 – You are healthiest and most mature when you can stand on your own, self-regulate your emotions, and NOT depend on others.

Rule #2 – When you feel threatened or stressed, establishing power over other people helps you feel safer.

Rule #3 – When you feel threatened or stressed you can regain a sense of safety by making those around you feel smaller.

Rule #4 – In a competitive social structure, individuals at the top of the hierarchy have more value and more power than those on the bottom.

Rule #5 – In a hierarchical social structure, individuals at the top (dominant group) define the reality of those at the bottom (subordinate group) without any real knowledge of their strengths and weaknesses while the subordinate group must pay close attention to the needs and desires of the dominant group.

These seven basic rules, when unconsciously enacted as part of a complete socialization process, systematically and effectively stimulate and enlarge the pathways for stress in your body and brain and undermine the critical pathways needed for connection and cooperative behavior.  In order to begin to build a greater awareness and deeper understanding of these 7 Rules, I will post a blog dedicated to each rule over

the next seven weeks! As you begin to realize the amazing capacity of your brain to connect, it will become even clearer how these rules are sabotaging the very specific neural pathways you need to form healthy, mutual, rewarding relationships.