For some perspective on a key US stock market index, today’s chart illustrates the overall trend of the tech-laden Nasdaq Composite since 2000. As today’s chart illustrates, the Nasdaq’s seven-year post-financial crisis rally is still very much intact. While other major indices have pulled back slightly (though still trade near historic highs — the Dow just closed above 20,000 and the S&P 500 is closing in on 2,300) the Nasdaq continues to post all-time record highs and, today, did so once again.

2.Gasoline Demand Falls to Lowest Level Since Feb. 2012…Not Sure What to Make of this Yet.

So yes, both gasoline stocks and supply remains at extremely high levels, but what set off alarm bells is not supply, but demand: the EIA last week reported that the 4-week average of gasoline supplied – or implied gasoline demand – in the United States was 8.2 million barrels per day, the lowest since February 2012. And, as Reuters adds, U.S. refiners are now facing the prospects of weakening gasoline demand for the first time in five years.
http://www.zerohedge.com/news/2017-02-07/goldman-stunned-collapse-gasoline-demand-would-require-us-recession 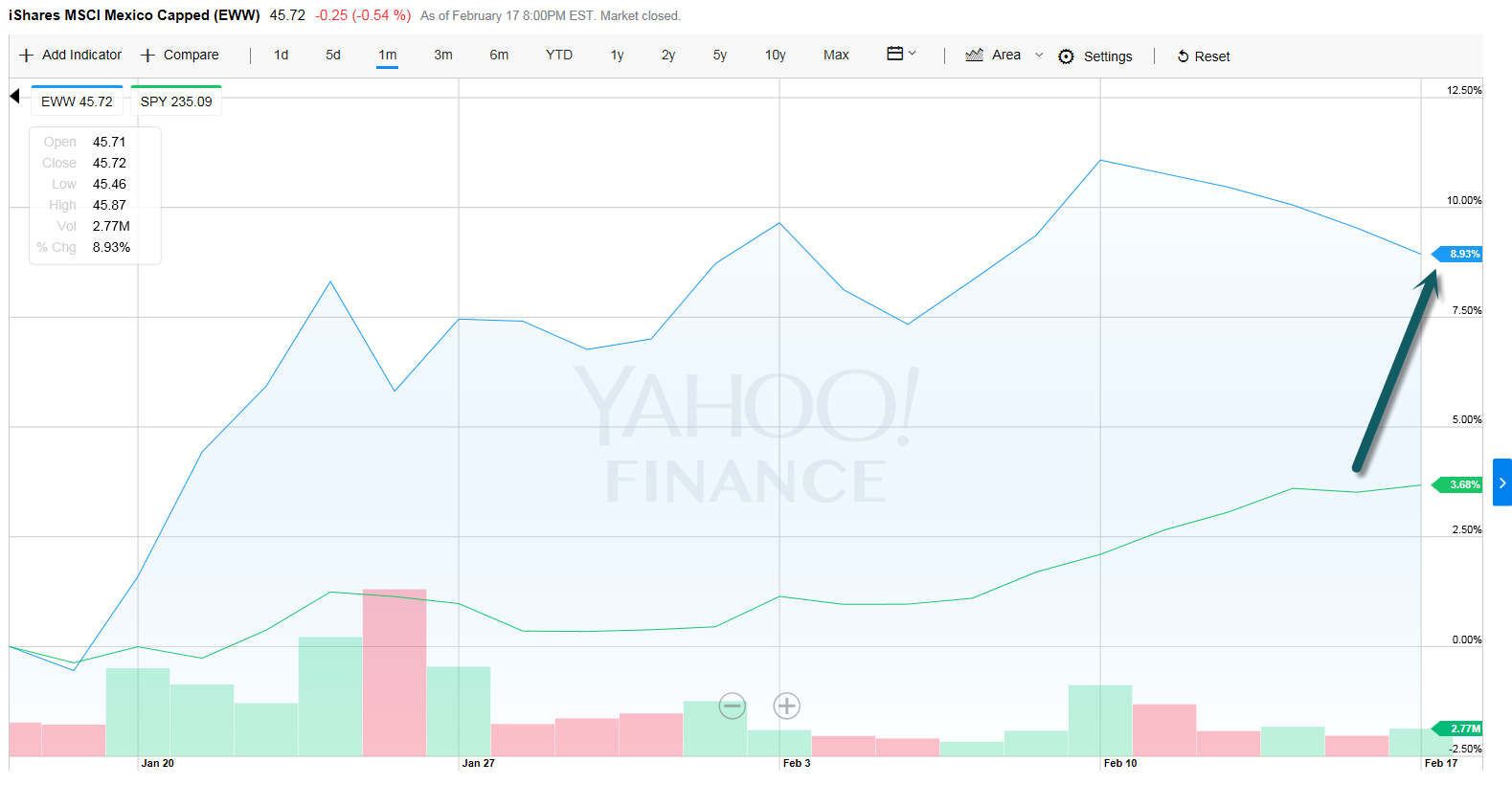 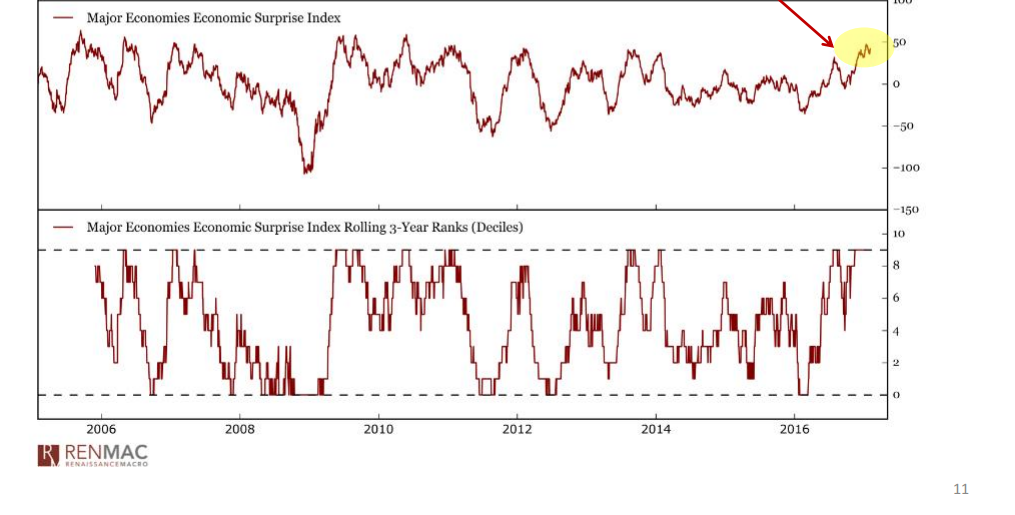 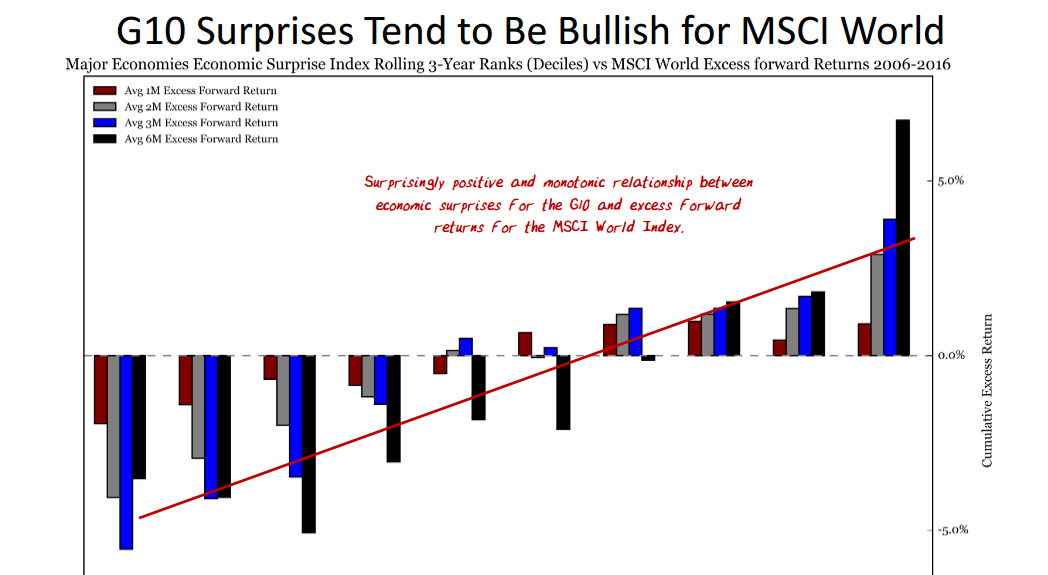 Jeff DeGraff
www.renmac.com
Reach out to Eric for Research EBoucher@renmac.com

5.Death by Amazon…Retailers Giving Back all of the Trump Rally. 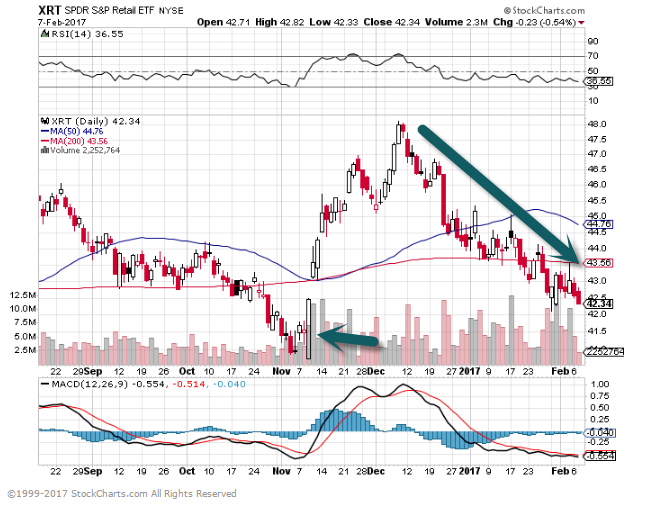 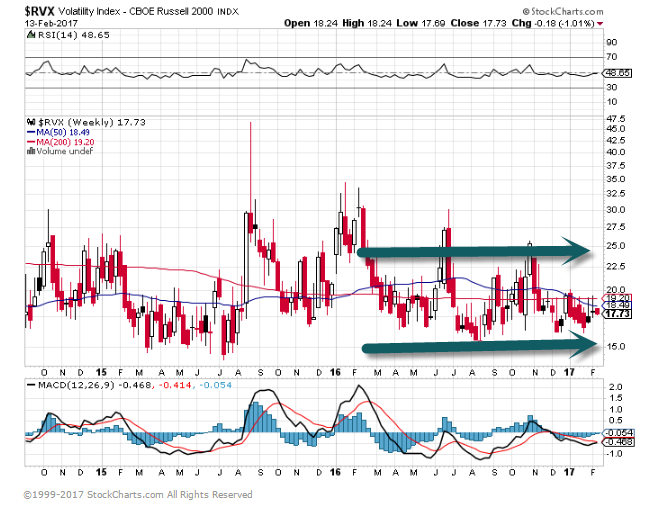 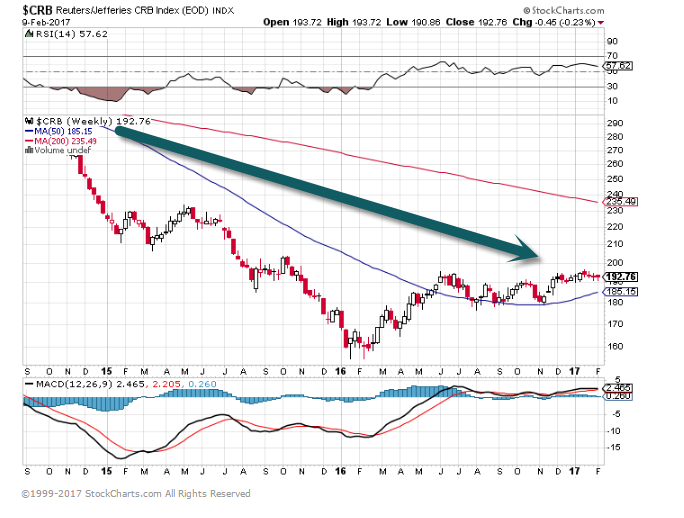 While equities finished the day down on Monday and have now traded down on a daily basis more in the last three weeks than they have traded up, amazingly, we have yet to see a day since the November election where the S&P 500 dropped 1% or more. In fact, you have to go back nearly a month before the election to find the last time the S&P 500 dropped 1% in a single day. The lack of a 1% decline through Monday is notable for the fact that it has now been 80 trading days since the S&P 500 last saw a one-day decline of 1%+. During that span, the index is up 7.3%.

The chart below shows historical streaks of trading days since 1928 that the S&P 500 went without a decline of 1%+. Looking at the chart, these types of streaks were pretty common in the 1950s and 1960s, but from 1970 through the present, their frequency has become increasingly sporadic. While there were eleven streaks in the twenty-year stretch spanning the 1950s and 1960s, in the more than four decades since there have only been eight. In fact, the current streak represents the first 80+ trading day streak without a 1% decline since 2006, and before that, you have to go back to 1995 to find the next one. 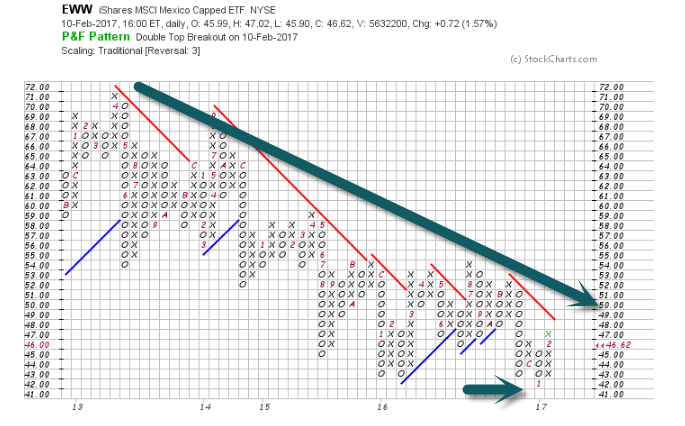 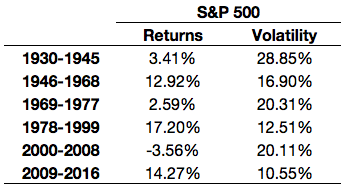 Why China Is Concerned With Money Outflows

At first glance, this map of Japan (below) seems to imply a similar level of wealth concentration in certain regions. Like China, Japan is informally divided into regions and sometimes reports data at the regional level.

Japan is made up of four main islands: Kyūshū, Shikoku, Honshu, and Hokkaido.

Kyūshū, Shikoku, and Hokkaido constitute regions of their own. Honshu (the largest and most populous of the Japanese islands) is subdivided into five additional regions.

These five Honshu regions account for 87% of the Japanese economy. (About 43% of thateconomic activity comes from the Kantō Region’s seven prefectures.)

Factoring in the Tokyo greater metropolitan area increases this figure. According to the latest available data from the Organisation for Economic Co-operation and Development (from 2012), Tokyo had the largest GDP of any city in the world at $1.48 trillion. (Seoul was second with a GDP of less than half of that.)

That means that greater Tokyo accounts for almost a third of Japan’s total GDP.

Well Worth the Read…George Friedman Comments on Asia 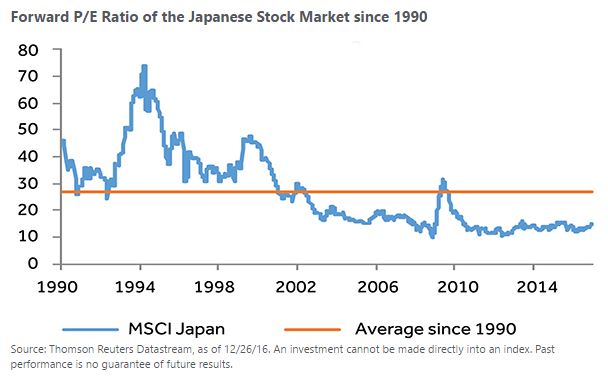 10.How Habits Become Your Destiny

Habits are a part of everyone’s life. We all have them, we all know of them, and most of us tend to complain about them. Yet not many of us take the time to learn about them. If we did, we would be a lot more successful with building good habits and eliminating bad ones.

With 40 percent of your daily behavior being based on habits, it’s important to stop and take stock of what they actually are. Imagine if 90 percent of that 40 percent is all bad habits, or habits that are holding you back? That’s not a fun nor productive place to be.

That’s why it’s important to become your very own social scientist for your own life. Explore what your habits are, how they have been built, and whether they are good or bad for you. This is where you have to start. Without the self-awareness and the breaking down of the habits, it’s very difficult to start changing your habits or adding new ones in.

To help you get started, I have three questions for you to use when you start exploring your habits:

1. Is this habit helping me to be happier, healthier or more successful?

If the answer is no, it’s obvious you’ve got to let it go. The only tricky part is you can’t just eliminate it because it’s an existing neural pathway in your brain. Instead, you’ve got to dress that bad habit in new overalls to turn it into a good habit you want to keep.

Without understanding what your habit consists of it’s impossible to change it or adapt it. This is where Charles Duhigg’s habit loop comes in, with each habit having a cue (a consistent time, location, emotion, person or activity), a routine (the actual behavior) and a reward (some sense of satisfaction). The key is realising that even the bad habits have a reward even though we might not label them as such.

3. Do I want to change one or more habits in my life?

No one can tell you what habits you should or shouldn’t have. You know what is best for your body and being, and you know what habits you are happy to involve in your life. When you’re deciding whether to change a bad habit or to add a new good habit into your life, make sure you have a clear why behind it. Doing it “because someone said so” isn’t going to keep you motivated through your habit change.

The most important thing to remember is that habit change is possible. Even though it’s difficult at the start, the more you stick with it, the easier it becomes. There are lots of different tools and strategies to test when it comes to changing habits and building new ones successfully, but before all that comes the understanding of what habits actually are, how they are formed, and how you can override the neural pathways of bad habits.

Then, like Aristotle said, you’ll be on your way to excellence: “We are what we repeatedly do. Excellence, then, is not an act, but a habit.”