Global Growth and Inflation Accelerating Before Any Trump Policies in Play.

Inflation across the world is beating analysts’ forecasts even before the potential effect from Donald Trump’s economic policies. The global Citi Inflation Surprise Index, which measures price surprises relative to market expectations, is at the highest in more than five years. The reading turned positive in December — meaning inflation data were higher than expected — for the first time since 2012. 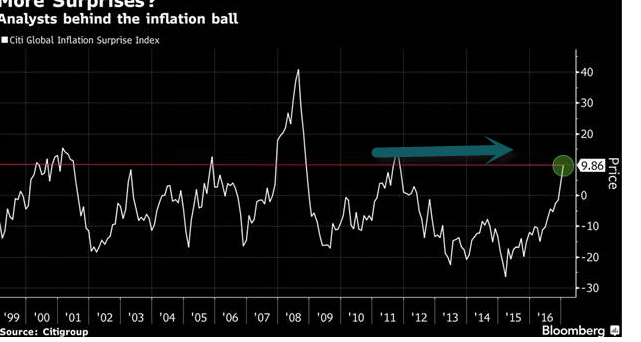 10 yr. breakeven inflation above 2% for the first time in two years. 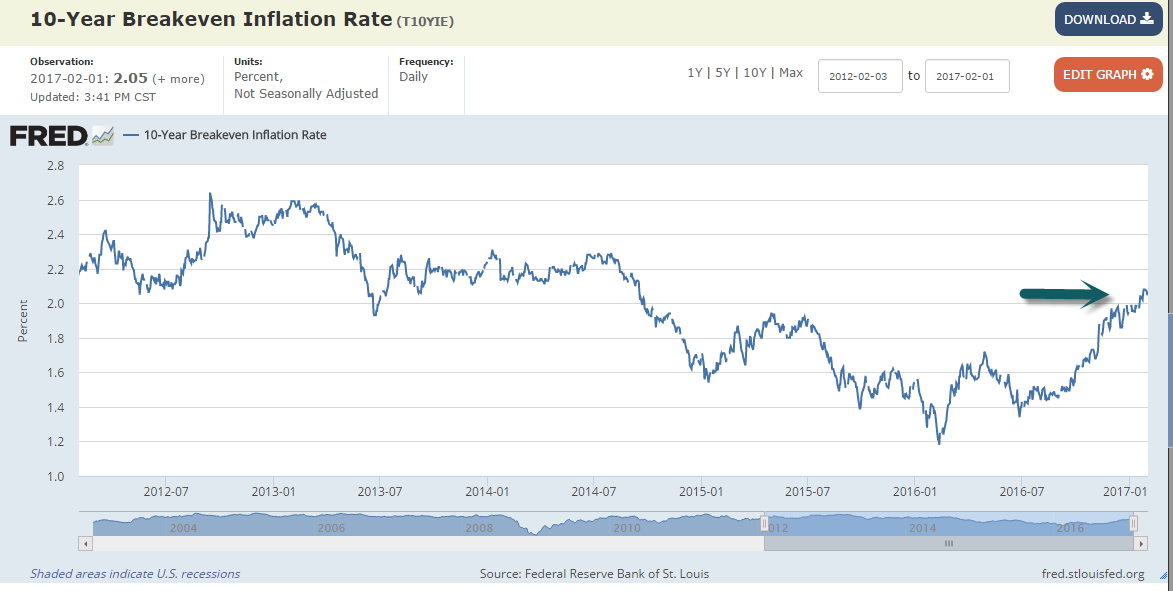 Eurozone: Given the Eurozone’s rising CPI, the ECB should certainly be curtailing its QE program, some caution is warranted. Here is why. As the chart below shows, energy was by far the biggest driver behind the rise in the euro area inflation. 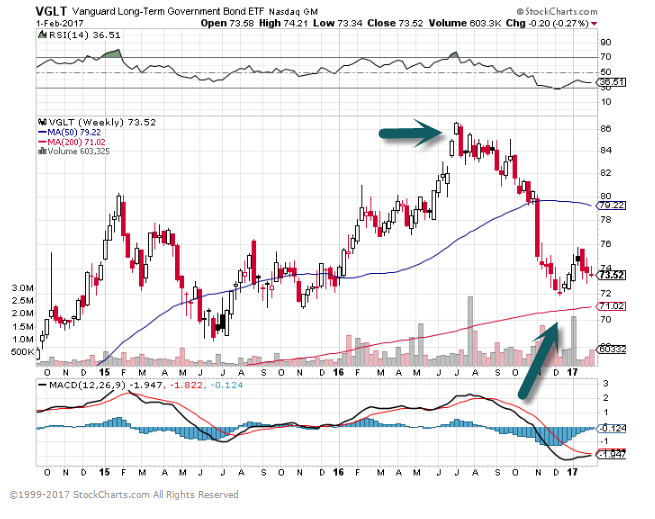 VGLT 50day thru 200day to downside on daily chart 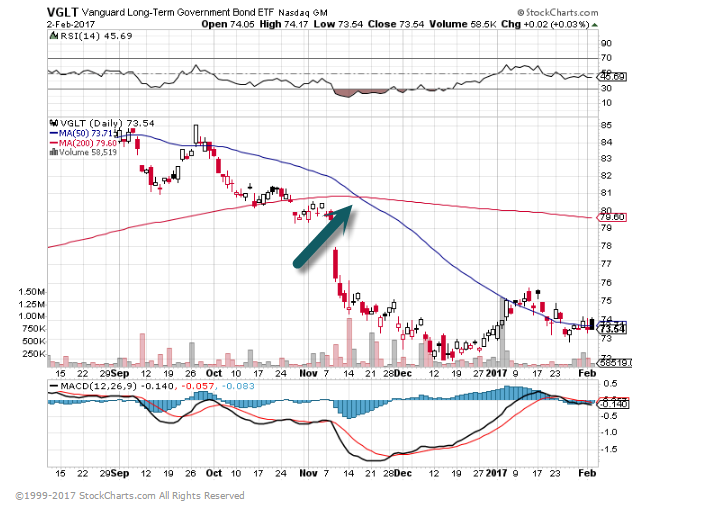 For some perspective on the future state of the US economy, today’s chart presents the ECRI Leading Index (a composite of seven indicators chosen for their ability to signal both the beginning and the end of economic recessions). Since 1970, a significant downturn in the index of leading economic indicators has preceded the beginning of a recession by about ten months; a significant upturn in the index has preceded the end of a recession by an average of two months. The exception to this was following the financial crisis as the economy worked to realign some historic imbalances. Over the past year, the ECRI Leading Index has surged and is currently at all-time record highs — a positive sign for the economy over the near-term.

6.Global Capex has been Weak for Years.—Will a Global Recovery Spark a Rise in Capex?

There are two types of Capex – those that are invested in to maintain existing levels of operation within a company and those that are invested in something new to foster future growth. Customarily, regardless of the manner of investment, Capex is money spent with the intent of initiating future cash flow and a substantial return on investment (ROI). 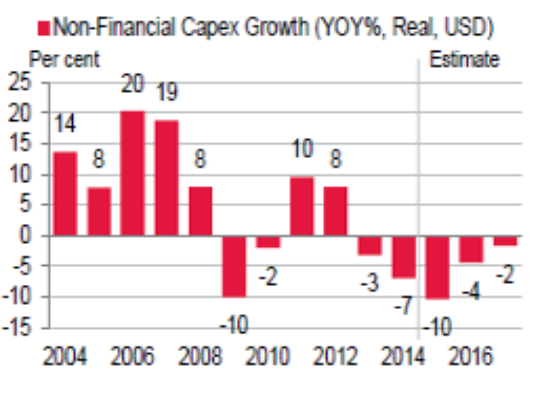 Feb 2, 2017
Turkey has surged over the last few days as the country’s beaten-down equity and foreign exchange markets have gotten a breather. The same goes for biotechs and pharma, receiving positive comments from the Trump Administration this week, while Mexico has also rallied notably. Energy companies continue to top the worst performers list with Banks and homebuilders also declining. 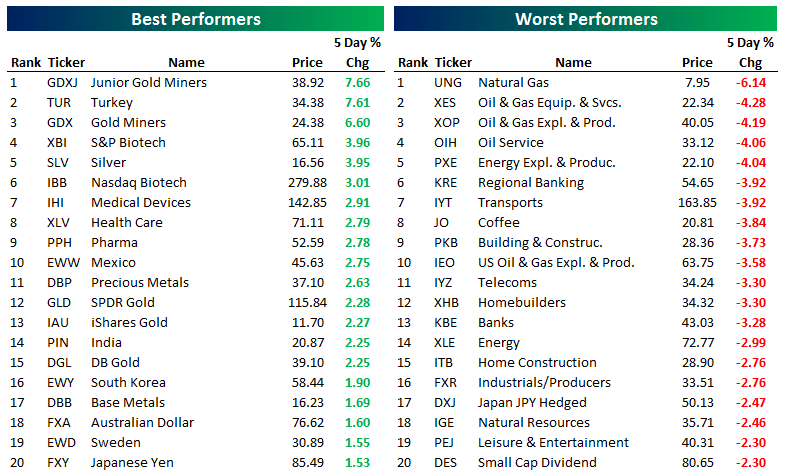 Bespoke provides Bespoke Premium and Bespoke Institutional members with a daily ETF Trends report that highlights proprietary trend and timing scores for more than 200 widely followed ETFs across all asset classes. If you’re an ETF investor, this daily report is perfect. Sign up below to access today’s ETF Trends report.
See Bespoke’s full daily ETF Trends report by starting a no-obligation free trial to our premium research. Click here to sign up with just your name and email address. 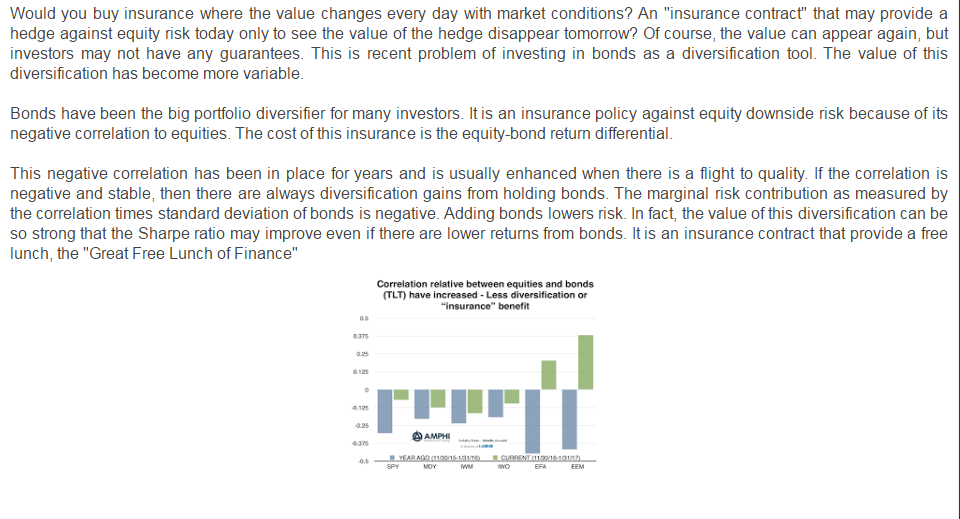 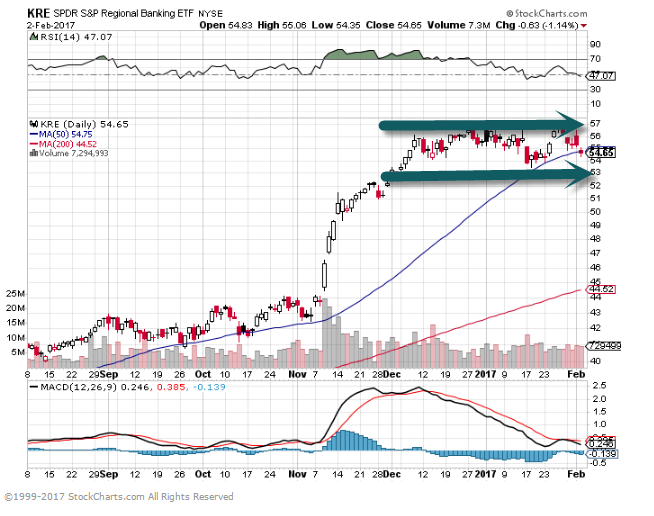 Tina Wadhwa
Feb. 2, 2017, 02:23 PM
Denise Shull is a decision coach and performance architect who consulted on Showtime’s BILLIONS for the Wendy Rhodes character, the in-house psychotherapist for Axelrod hedge fund.

A former trader, Shull graduated from Harvard Kennedy’s executive program in “Investment Decisions and Behavioral Finance” and holds a Masters in neuroscience from the University of Chicago. Her thesis research, “The Neurobiology of Freud’s Repetition Compulsion” was cited as one of the earliest groundbreaking papers in the emerging field of neuropsychoanalysis. Bloomberg’s Tradebook created their trader brain exercise game based on her work.

Tina Wadhwa: How do people’s emotions shape their feelings about investments and risk-taking?

Denise Shull: How investors think they make decisions isn’t really what’s happening. It only looks like a purely thought driven, mathematical analysis. Neuroscience consistently demonstrates that thoughts are the product of feelings, emotions and the body. These elements constantly cycle in a reciprocal way and create what we call confidence or conviction – the aspect of decision making that investors do acknowledge but that is feeling/emotion based.

There are levels of feeling and emotion that play into perception: Basic body – tiredness will cause you to see less risk. Affect – or the difference before and after coffee, like a mood or outlook. Emotion – an intense form of affect with meaning that is partially about the situation and partially about one’s personality and past.

For investors and traders, two examples are the fear of missing out and the fear of future regret. FOMO, a term I began using in 2007, causes people to get into positions they haven’t fully vetted. FOFR causes them to say in positions that aren’t working. In the latter, there is a great fear of getting out at the worst possible moment and feeling “stupid.” Investors want to avoid that at any cost and it keeps them in losers for too long.

Fractal emotions are the expectations and explanations for why things happen to you in the same way. The repetitive emotions we all feel that make one situation look like another. This is where life experience really comes into play.

Examples from my clients include a former rugby player who always wanted to add to a position whenever it wasn’t going well – he was trying to power through it. Conversely, an equity derivatives guy who could never get as big as he wanted into a position. This came from a mother who was so risk-averse she wouldn’t let him play soccer growing up.

: How can investors protect themselves from emotional reactions in decision making or trading scenarios?

Shull: Learn to separate the integral emotions – the ones with market info – from the incidental – the irrelevant ones.

The mistake is trying to set all emotion aside. It won’t work and you don’t want it to otherwise you would have no confidence or conviction. Worse, by setting it all aside, the fractal or life experience ones will win at the worst possible moment. Their energy builds up to the point that it compels action – if the emotions are shunned.

Emotional sophistication – understanding both how emotions work and how they work for you – allows an investor or trader to glean important information from their unconscious pattern recognition which is delivered as a what we call gut feel or intuition. It may just be telling you to dig deeper. Fear in it’s pure form is trying to help you by pointing out a risk or deficit in information.

Within all of this, one way to help oneself is to understand the true nature of the market: A never-ending global poker game. This matters because in contrast to sports, where the game or race always has a known end-point, your brain plays tricks on you because there is always another quarter to play. This level of possibility plays into fear of future regret for example. The uncertainty, you can always make a case for up and down, also causes your brain to go to context and pattern recognition more than it would if you were engineering a bridge where there are specific quantifiable relationships.

Investors try to deduce those same type of relationships but they don’t exist. The market is a social, human game. All you are ever doing is better that someone else will think it’s a good idea to pay more for something in a year. It’s really social prediction which is uncertain. But it helps to recognize the essential question of why will the guy next door buy this from me for more. Brain science shows that people who are good at that question are better price predictors.

Feeling the angst of the uncertain, unknowable market future helps one navigate it better. Research shows that labeling one’s feelings precisely and accurately is the best way to sort them, the best way to not act on the irrelevant or incidental ones and the best way to understand the information component in the body-based sensations of affect and emotion.

The ability to recognize the sensations of your body is called interception and it’s associated with greater P&L and longer track records in traders. It’s also associated with more loss aversion but not more risk aversion – meaning that the person can get out of positions that aren’t working and get into ones that areDenise ShullWadhwa: What types of personalities show up in high-stakes situations?

Shull: I think there are some personalities who love the game of risk more than others. They love the human game of it and it’s really about that – everyone thinks it’s about the big paycheck but it’s not. It’s about winning the poker game – being able to predict the future, the way the cards will play out, better than the next guy.

Wadhwa: What are the biggest mistakes investors and traders make?

Shull: It’s fair to say that holding onto positions too long – looking for more profit or hoping to recoup a loss – is the biggest mistake. Both stem from unrealized fears – fear of missing out or fear of future regret respectively but in their quest to set their emotions aside, investors fail to recognize these fears as the motivating factors and rationalize not getting out. To behavioral finance, it looks like confirmation bias and on one level it is, just driven by the fears of missing out on more profits or the regret of getting out right before the position comes back to you.