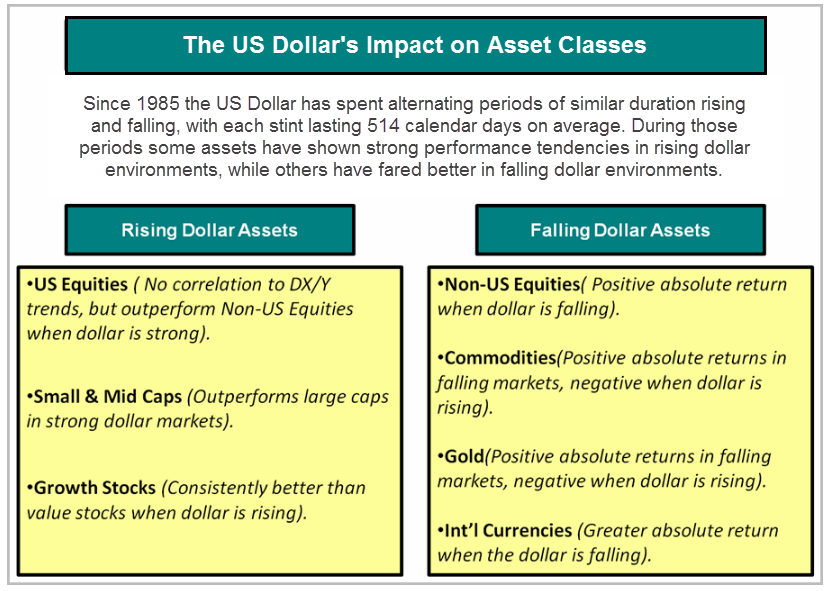 2.Follow up on my Last Few Days Energy Comments…Oil Inventory Drawdowns to Start 2017 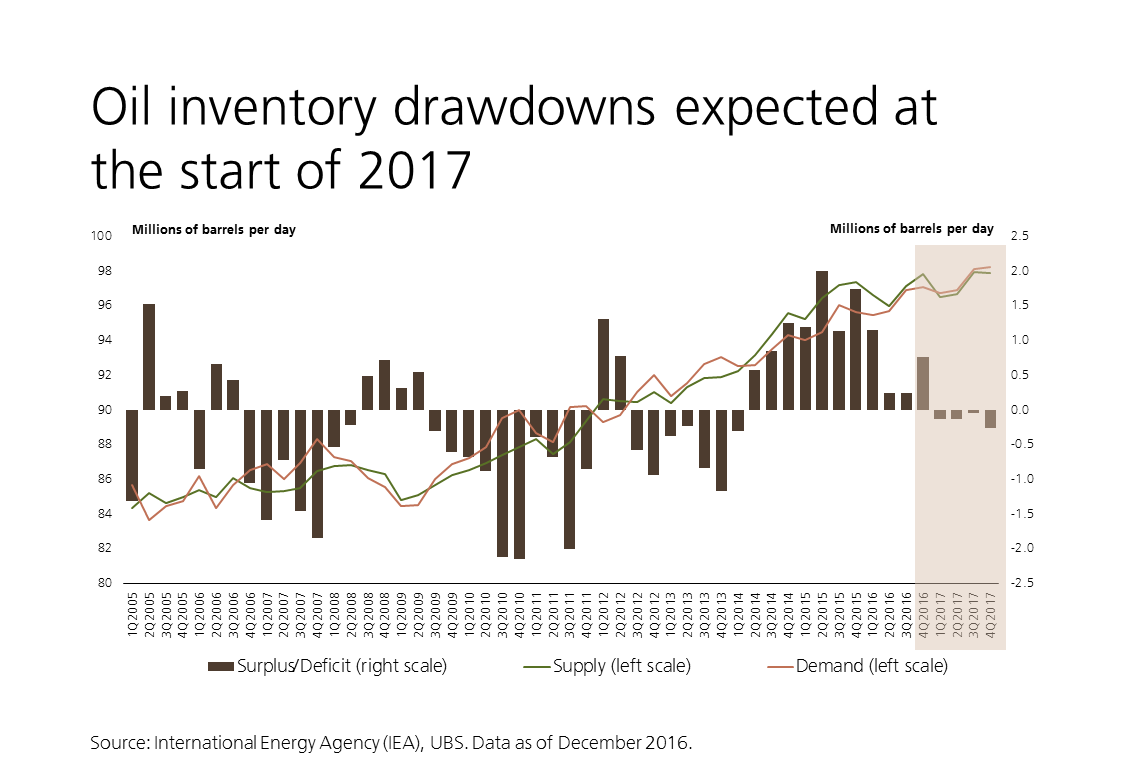 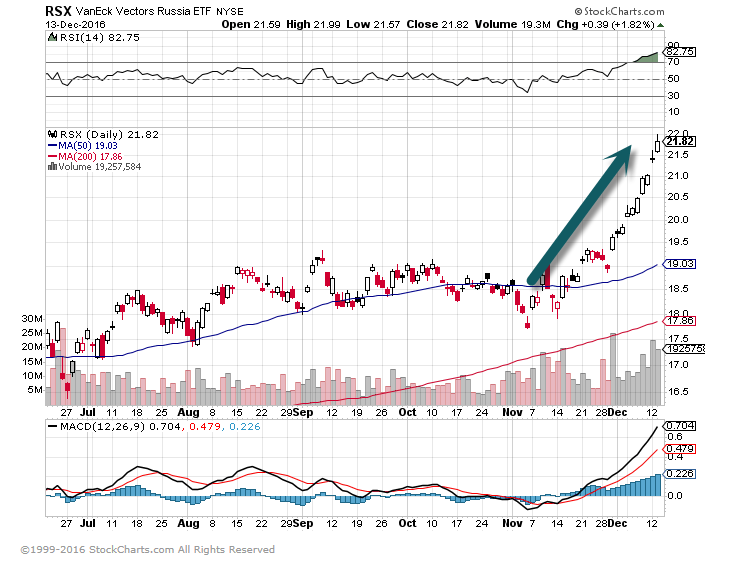 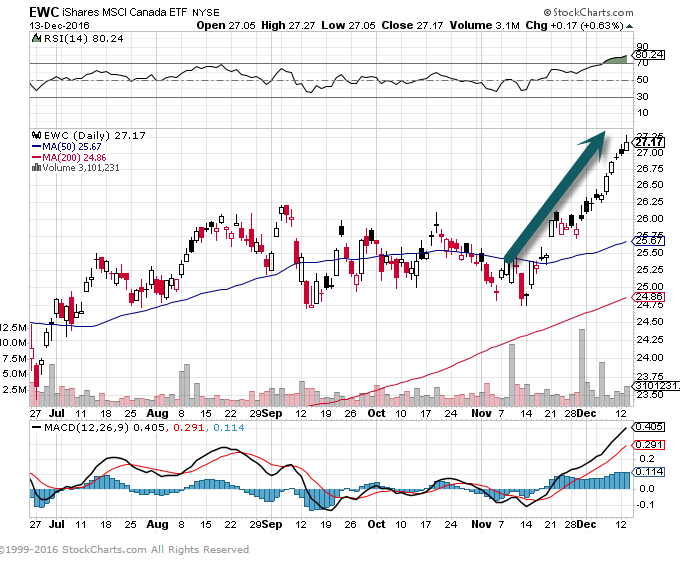 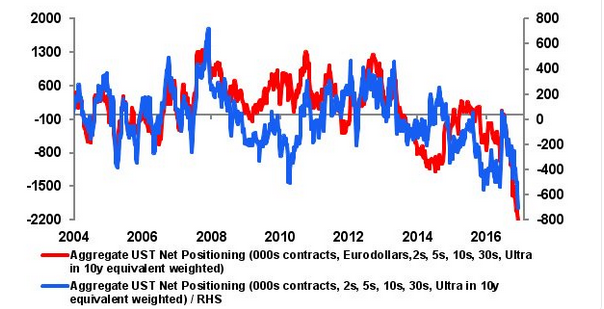 5.Bank Spike….25% Above 150 Day Moving Average for the First Time in History.

I am not familiar with history of using 150 day moving average.

Worth uses charts like the one below to make his case. It shows how the Nasdaq Bank Index BANK, +0.26%  has been living 29.2% beyond its 150-day moving average.

Up until now, that gauge for banks had never in its history traded more than 25% above this “smoothing mechanism,” the technical analyst writes in a note. 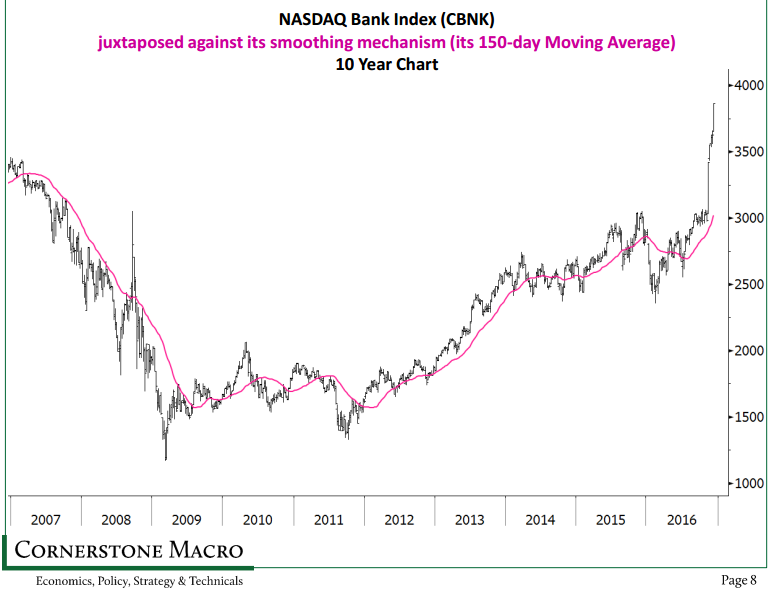 While many of the policies that Trump says will “make America great again” are still under development, investors wasted no time funneling assets into US ETFs. US-focused ETFs took in more than $49 billion in November.10 On the international side, investors switched course and showed a preference for single country exposures over broader or regional international ETFs. Single country international ETFs posted inflows of $933 million last month, but remain in negative territory for the year.11

Investors continued to steer money away from currency hedged ETFs. In November, more than $820 million left those ETFs even as the dollar advanced 3.9%,12 boosted by post-election prospects of increased spending and higher rates. Currency hedged ETFs are now down $23.4 billion year-to-date.13 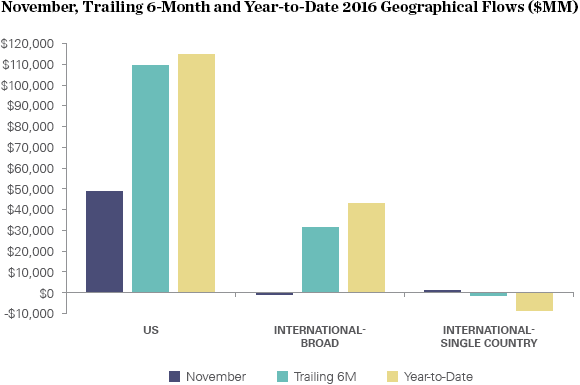 7.Dated Story that I Missed….32 Chinese Banks had a Total of $2 Trillion in Investment Receivable this Year, up from $334 Billion at the End of 2011.

China’s Banks Are Hiding More Than $2 Trillion in Loans

Accounting sleight of hand means banks don’t have to set aside capital for potential losses, sowing fears of a crisis; new apartments with no residents

As of June, 32 publicly traded Chinese banks had a total of $2 trillion in investment receivables as of June, up from $334 billion at the end of 2011, according to a tally by The Wall Street Journal of the latest available information from data provider Wind Information Co. 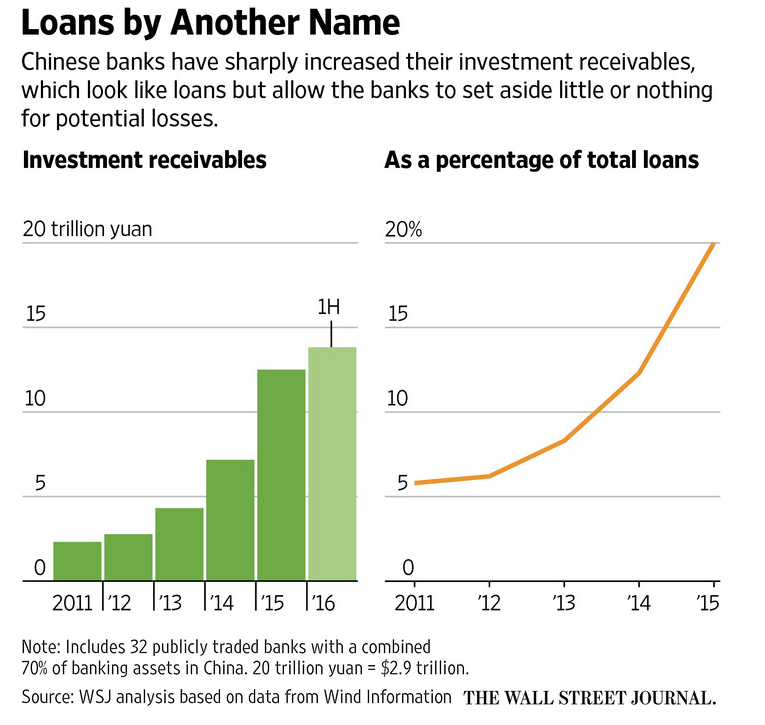 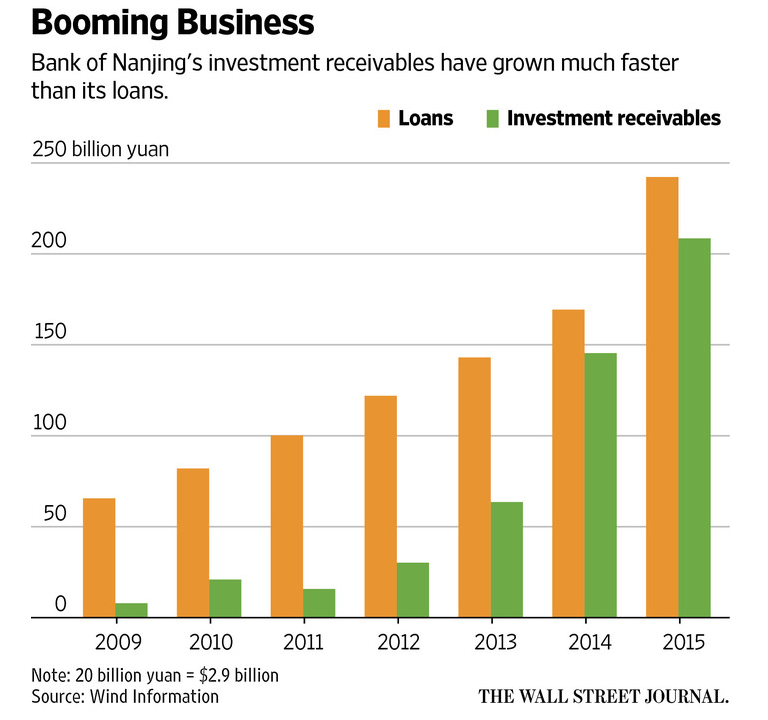 8.People are Again Taking Money Out of Their Homes….Positive Sentiment on Home Value? Economy?

For Q3 2016, the Net Equity Extraction was a positive $39 billion, or a positive 1.1% of Disposable Personal Income (DPI) .  This is only the second positive MEW since Q1 2008. This graph shows the net equity extraction, or mortgage equity withdrawal (MEW), results, using the Flow of Funds (and BEA data) compared to the Kennedy-Greenspan method.  Read more at http://www.calculatedriskblog.com/2016/12/mortgage-equity-withdrawal-positive-in.html#furJkloc5zfW5HS8.99 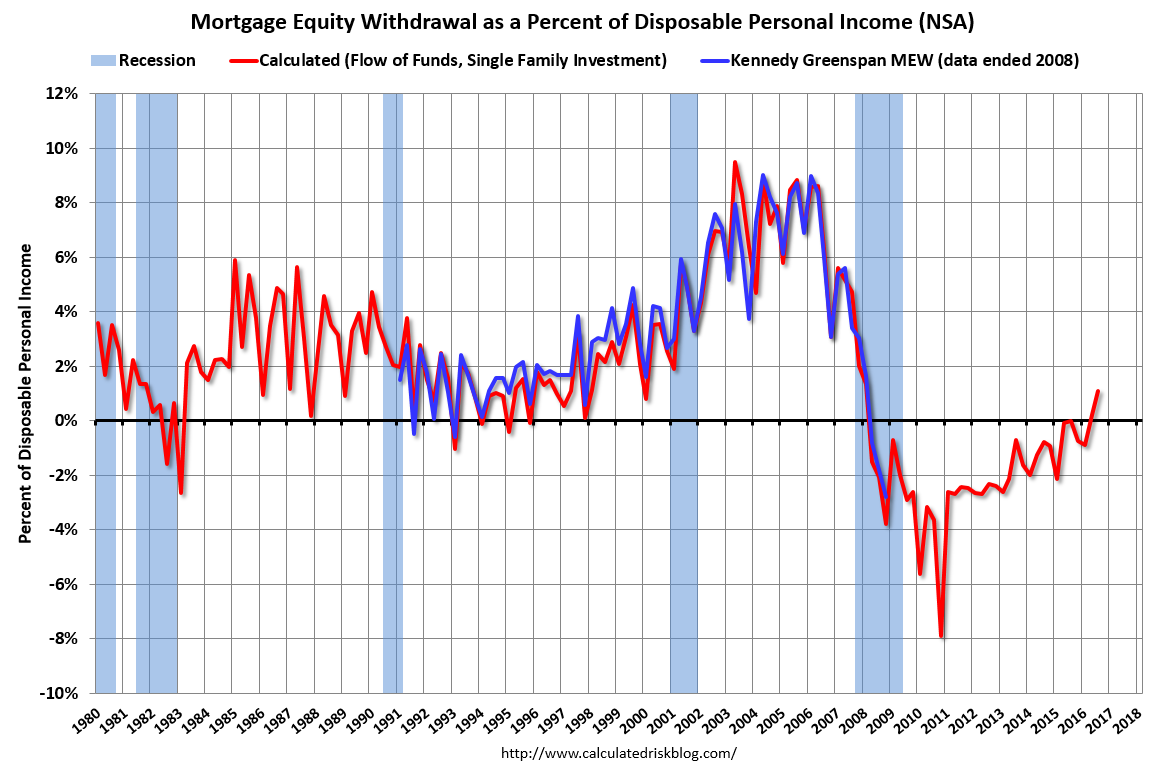 Brace Yourself: Our Latest Look at Student Debt

Note: We’ve updated the quiz based on last week’s Q3 2016 Financial Accounts of the United States (previously referred to as the Flow of Funds Accounts).

College Tuition and Fees constitute one of the biggest threats to our economic outlook. Here is a chart of data from the relevant Consumer Price Index sub-component reaching back to 1978, the earliest year Uncle Sam provides a breakout for College Tuition and Fees. As an interesting sidebar, we’ve thrown in the increase in the cost of purchasing a new car as well as the more substantial increase for the broader category of medical care, both of which pale in comparison.

During the decade of the 1990’s, when real out-of-pocket funding declined 25%, tuition and fees rose 92%, which sounds substantial … until you compare it to the 1404% across the complete data series. For early boomers paying for college was sort of like buying a car. But in recent decades, it has become more like buying house, for which the strategy of a minimum down payment is commonplace for first-time buyers.

The annual stair-step rise in college costs seen above is probably the most dramatic visualization of inflation data we routinely produce. The only chart we have that rivals it is our quarterly snapshot, updated earlier today, of federal loans to students from the Federal Reserve’s Z.1 Financial Accounts of the United States (formerly known as the Flow of Funds accounts). 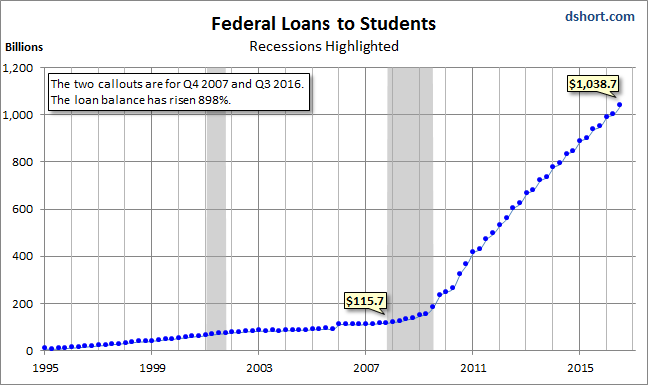 Sadly, the chart above doesn’t illustrate all the student loans outstanding. We don’t have a data source for private loans for college expenses, but the New York Fed estimates total student loan debt to be in the neighborhood of $1.2 Trillion.

An excellent source economic analysis of the impact of tuition debt for the larger economy is the New York Fed, whose economists keep a close watch on this topic. See this slide set (PDF format) posted last year: Student Loan Borrowing and Repayment Trends, 2015.

Over 40 million Americans struggle with anxiety, and it can cripple your mind and body. I know from personal experience.

Ten years ago, I struggled with it severely. For six weeks straight, it made me feel like I was having a heart attack.

Tingles ran from the top of my head down to my fingertips. I had a tight chest, elevated heart rate, and couldn’t catch my breath.

This went on 24 hours a day, seven days a week. The symptoms were so intense that I checked into an emergency room — twice.

(By the way, if you ever go to a busy emergency room and want to get to the front of the line, just say you’re having a heart attack. They’ll take you to the back right away!)

There I was, a 30-year-old, world-famous exercise guru with his workouts featured in Men’s Health magazine each month, and I thought I was dying!

My personal business was taking off, and I was making more money than most my peers. Despite all this, I was at the lowest point of my life.

In retrospect, burning the candle at both ends was the root of my anxiety. Each night, I’d go out to bars and chase girls until 3 a.m. Then I’d wake at 7 a.m., work 12 hours at a frenetic pace, and then I’d do it all over again.

The emergency room doctor sent me home wearing a heart rate monitor. When I returned it 24 hours later, she looked at the data and told me that, physically, I was fine.

So I looked for more answers.

I got into yoga and Qi Gong. The practices taught me how to improve my breathing, which lowers your body’s stress response. I practiced those regularly and also researched my problems.

I realized that working more hours and chasing more opportunities (in both business and in bars) didn’t work for me. It left me scattered and stressed.

The solution, for me, was to become laser focused on my top priority in my personal and professional life, and to learn to say no to piling on more and more commitments.

I needed better systems and more structure in my life.

Paulo Coelho, author of The Alchemist, says it best: “Discipline and freedom are not mutually exclusive, but mutually dependent, because otherwise, you would sink into chaos.”

For example, imagine your city without any traffic lights. Intersections would be utter chaos and your daily commute would be as dangerous as Russian roulette.

That’s why we have rules of the road. The structure of traffic lights, stop signs, and speed limits allows us to get to our destination safely so we can enjoy freedom in our lives.

Likewise, when you put more discipline and better rituals into your daily routines, you can overcome any obstacle in your way, reduce your anxiety, and achieve your big goals and dreams.

Here’s how to do just that.

I thought I needed to do a thousand different things to grow my brand. In reality, I needed to cut out all the extras and hone in on the projects that delivered the biggest return — both emotionally and financially.

Once I did that, I eliminated unnecessary stress — and grew my bottom line.

Indeed, your solution is not to build a mountainous to-do list, it’s to build a NOT to do list. Here’s where I started:

Devote your newfound morning time to working on a big project you truly want or need to finish.

Hitting the snooze button gives you another couple minutes of sleep, but when it wakes you up again, you’re often groggier than you would be if you had gotten up the first time.

Sticking to your scheduled sleep and wake-up time seven days a week gives you extra time and energy, and eliminates the stress that comes with running late.

You know what it’s like to fall off track with your diet and workouts. Whether it’s a weekend party or a couple of months of missing the gym, skipping your self-care rituals (diet, exercise, massage, meditation, yoga, etc.) increases your anxiety levels and stresses you out.

Your workouts will give you time to think, and to boost your immune system so you fight off the colds that are running through your office. Even though you’ll feel like you are too busy for exercise, it’ll help you get more done in the long run.

As Richard Branson says: “One hour of exercise gives me four extra hours of productivity each day.”

Drinking alcohol can take the edge off, but it can also spike your stress and create next-day anxiety.

Set a limit on drinks before you go out, and recruit an accountability partner to keep you responsible. Two drinks are more than enough for Christmas cheer, but without risking a holiday hangover.

As it turns out, when I struggled with anxiety, I had no idea how to breathe properly.

What’s worse is that when you breathe incorrectly and consume a lot of caffeine and alcohol, your adrenaline levels spike, leaving you feeling the physical sensation of a heart attack (or, at least, severe anxiety).

But when I started breathing correctly, slowly and deeply from my belly, it felt like the weight of the world was lifted from my shoulders.

Here’s what you need to do the next time you feel anxiety attacking:

1) Take a big, deep breath in through your nose, filling your belly with air, over four seconds.

2) Hold the air in your belly for seven seconds.

3) Exhale slowly through your lips over a period of eight seconds.

Just two rounds of this deep, slow breathing exercise is enough to calm your nervous system, and it’s the perfect antidote for performance anxiety in the boardroom, bedroom, and dining room (should you have to give this year’s holiday toast).

It can even help you drift off to sleep at night. Just add two more rounds and you’ll improve your ability to fall asleep naturally.

These simple strategies will help you sleep better, control your anxiety, overcome your stress, and perform better so that you make the rest of the year the best of the year.