1.S&P Just Broke Out of 13 Year Consolidation Period in 2013-We have shown this before in a different chart form but same story.

While the S&P 500 SPX, -0.11%  has been in a bull market since the bottom of the financial crisis in 2009, it only broke out of a 13-year consolidation period in 2013, according to Ryan Detrick, senior market strategist at LPL Financial. In the past, when such lengthy periods of essentially flat returns came to a close, the result was an equally long advance. (While markets were extremely volatile between 2000 and 2013, an era marked by both the dot-com bubble and the financial crisis, it failed to make decisive new highs for an extended period in that timeframe.) 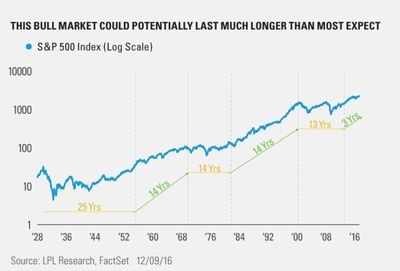 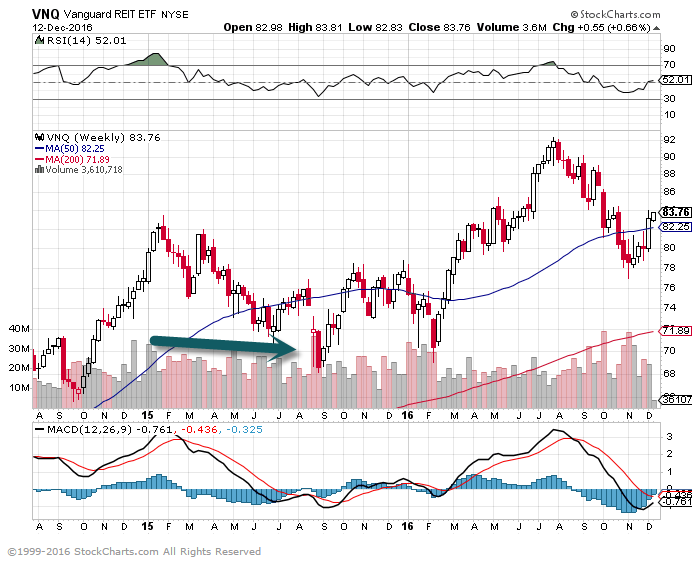 3.More on Optimism..Traders are Buying Tons of Upside Protection.

At least that’s the signal coming from the options market, where one metric suggests that traders haven’t been this optimistic about what’s to come in almost 20 years.

The price of call options that bet on a 10 percent rise in the S&P 500 Index are at the most expensive on record relative to at-the-money contracts in data going back to 1997, according to a note from Credit Suisse Group AG. And the optimism isn’t just confined to the  index itself.

“We see call buying across the sectors and at the single stock level as well,” the strategists, led by Mandy Xu, write. Here is the chart from their note.”The price of calls struck at 10 percent above the current price [of the S&P 500] has surged vs calls struck at the current price,” said George Pearkes, analyst at Bespoke Investment Group. “Basically, that means people are buying tons of upside exposure,” he added. 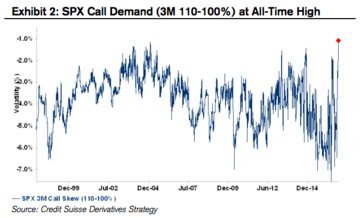 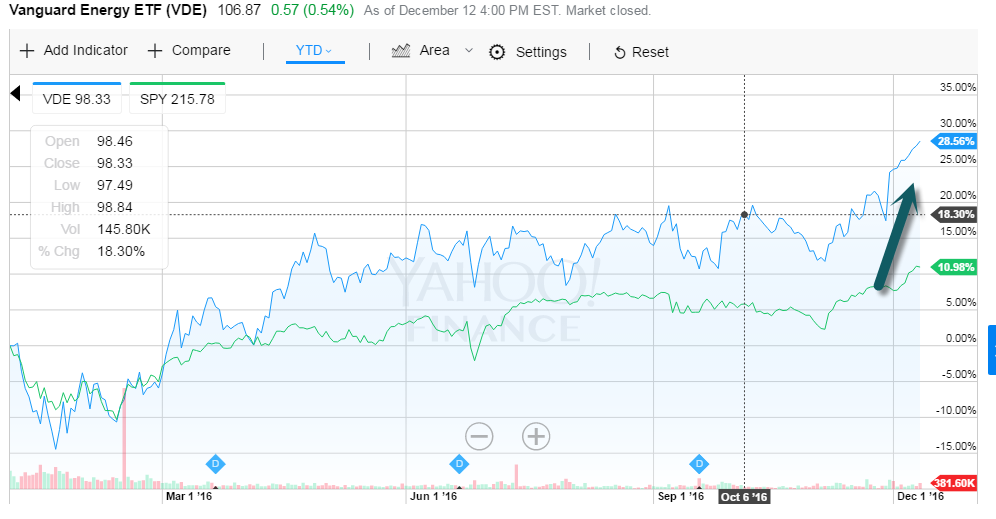 5.Fracking Back in Business?? 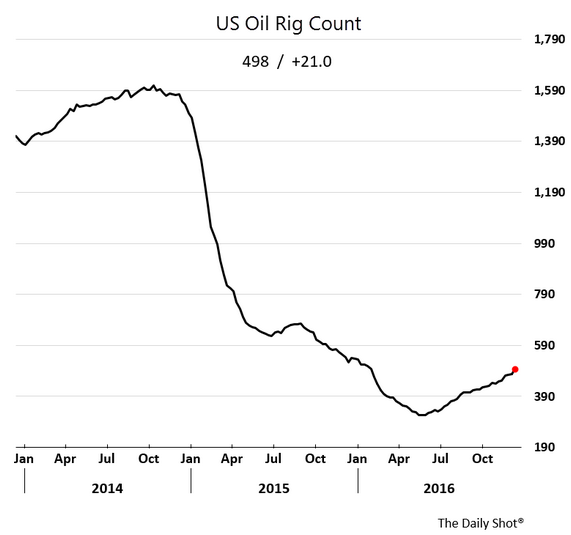 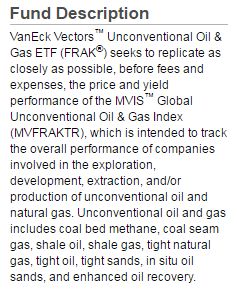 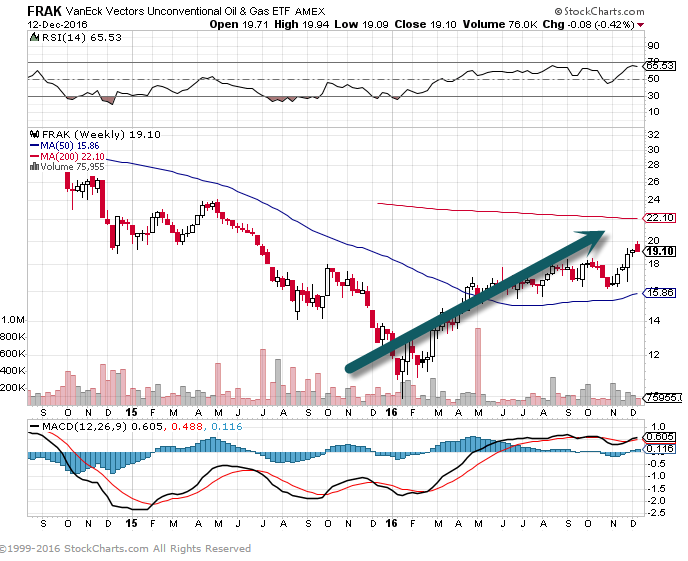 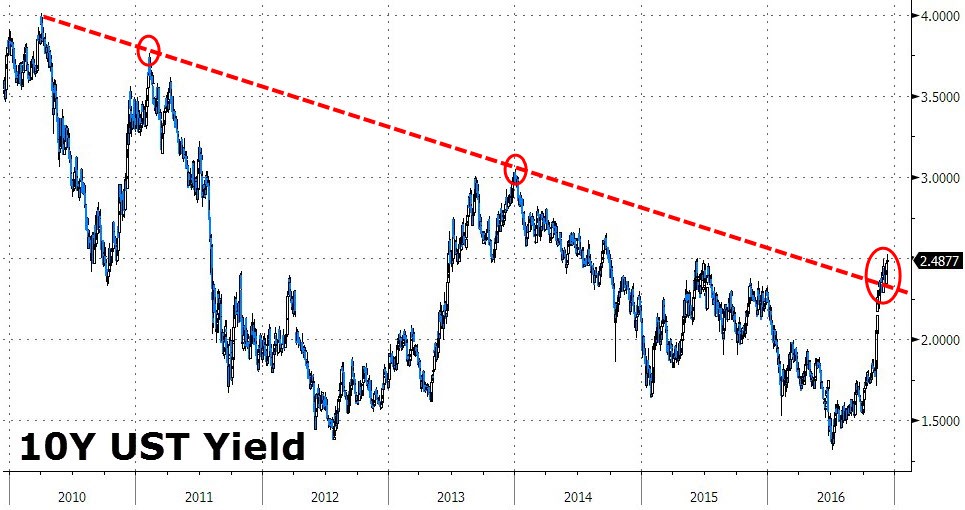 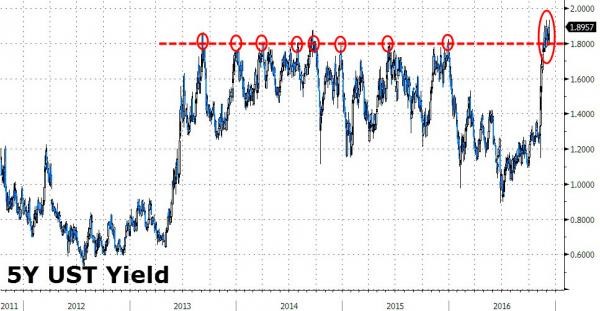 My Sunday Washington Post Business Section column is out.

This week, we look at the annual silliness that is the “Year ahead stock picking.”  In print the full headline Top stock picks? Feel free to try my time machine while online we went with No, don’t buy those ‘best stocks to own in 2017’.

Here’s an excerpt from the column:

Methodology: There doesn’t seem to be much of one; at least not one that is coherent or rigorous. There certainly isn’t anything close to academic research supporting the approaches taken. The articles suggested the top 10 lists are assembled by a panel of experts or chosen by the editors and staff. Surveying people who are in your general proximity and may or may not have any stock-picking skill seems to be a pretty random way to make a decision about where to put your money. The results reflect that.

Losers: One of the keys to stock picking is recognizing that over periods of time, two of three stocks will underperform their benchmark.

That is according to a study by Eric Crittenden and Cole Wilcox, formerly of Blackstar Funds. They reviewed their database, looking at every company in the Russell 3000 from 1983 to 2006. They found that 64 percent of its component stocks underperformed the broad Russell 3000 index over that period. It should come as no surprise that a list that is somewhat random in its assembly will similarly underperform a broad index.

Its not merely underperformance — over those 23 years, 4 in 10 stocks (39 percent) were unprofitable.”

We also look at the relative rarity of winners and why these top 10 lists are over-concentrated and under-diversified.

It is harder to fill a job today than in 2006 when the economy was overheating, see the first chart below. If there really is a significant number of workers available outside the labor market to come in and take jobs why are companies then saying that they cannot find workers? This chart suggests that we are already at full employment. Similarly, the number of workers holding two or more jobs is at a cyclical high, this is normally also a reflection of an overheated labor market, see the second chart. 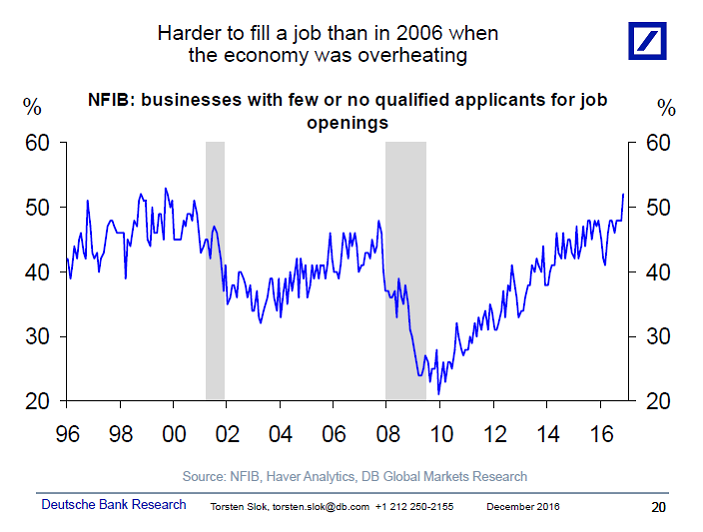 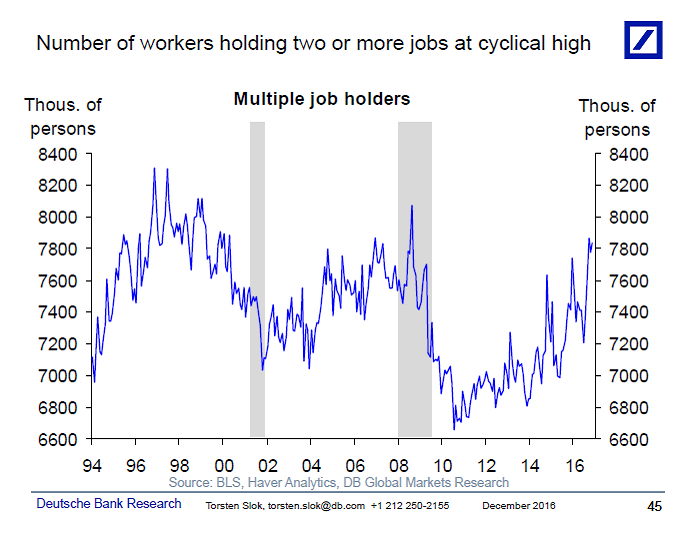 From our Food for Thought™ section: The most common job by state. 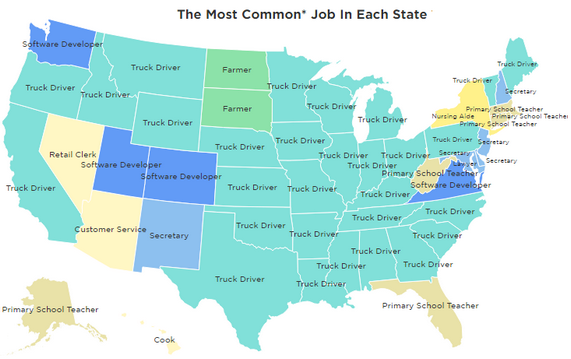 You Do This 160 Times a Day, It Stresses and Depresses You

Mind-wandering – A wandering mind is an unhappy mind.

Are you this sort of person?

Do you read something, realize you haven’t been taking it in, so you have to read it again?

Do you find you forget why you went from one part of the house to another?

Do you find that you miss signposts you are looking for while driving? Do you find you haven’t been listening to people’s names when you are introduced to them?

Does your mind wander when you should be listening?

Do you start doing one thing and then accidentally get distracted into doing another?

If you do a lot of these things a lot of the time, then it means you are prone to mind-wandering.

There is nothing wrong with mind-wandering if you are doing it deliberately – say lying back in that hot bath, brainstorming about what nice things you might do for the weekend.

But if your mind wanders a lot while you are doing other things – like reading or talking or working – research shows that it tends to pull your mood down.

Why is this? – Our minds have a negative bias – when they go walkabout without our control, they sniff out emotional trouble – i.e. unresolved conflicts which are what worries, doubts and regrets are.

Our brains are primed to detect conflict and whenever they do, they send out strong signals that interrupt our ongoing mental activity – a part of the brain called the anterior cingulate is key here.

Because worries, doubts and regrets are examples of conflicts, our minds preferentially attend to these over positive thoughts and memories and this pulls our mood down, making it harder to stay focused. Hence a vicious cycle develops.

This is why wandering minds tend to be unhappy minds. So what can we do about it?

The greatest protector against a wandering mind is focus. Paying attention to what we are doing – even if it is an ordinary task like washing dishes in the kitchen – helps prevent our minds going walkabout and hence sniffing out mood-lowering thoughts and memories.

This is one reason that mindfulness practices can be so helpful to people. It’s amazing how pleasurable a very ordinary activity like wiping a table or eating an apple can be if you simply take the time to focus your attention on the task and notice the various sensations involved.

Here are some other tips to help you decide when your mind wanders rather than letting it decide:

Work around your alertness

Your mind is more likely to wander when your alertness levels are at their lowest – am if you are an evening person or pm if you are a morning person. Plan to be occupied with routine tasks as much as possible or be physically active during your low alertness times.

If you are in a negative mood, write down in a notebook the positive experiences you have had today, recently and in the past and make a note of the good things you have done. This will bias your memory system to remember more of these and may help lift your mood.

In my book The Stress Test: How Pressure Can Make You Stronger and Sharper (Bloomsbury – out 3rd January), I give more examples of how you can discover the benefits of stress. Try the Stress Questionnaire on www.ianrobertson.org and follow me on Twitter @ihrobertson