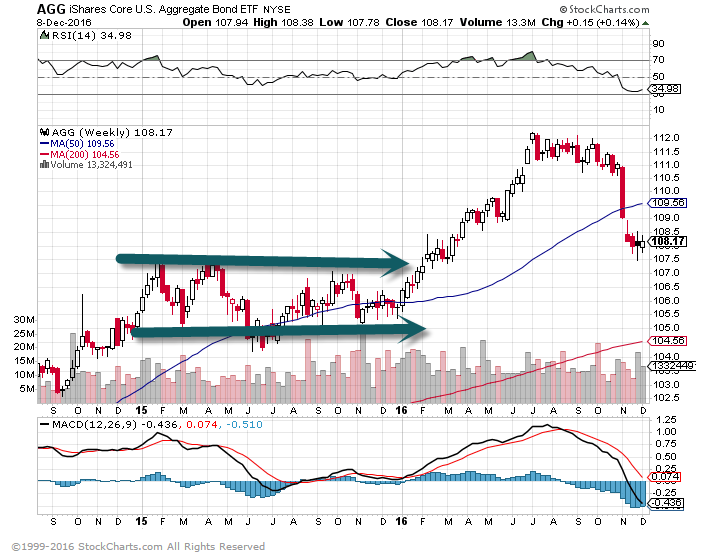 SentimentTrader shows the excessive pessimism towards 30Y Treasuries.   Investors made the biggest shift in more than three years into funds that help provide protection against rising interest rates ahead of next week’s meeting of Federal Reserve policymakers who are expected to increase overnight borrowing costs for the first time this year.

Snapping a seven-month losing streak, China’s exports gained in November as a cheaper yuan aided foreign purchasing. Exports in dollar-denominated terms edged up 0.1% on year, while imports rose 6.7%, leaving Beijing with a trade surplus of $44.6B. The stabilizing data suggests demand remains intact for now as the world’s largest exporter faces potential headwinds and policy uncertainty in the U.S. www.seekingalpha.com 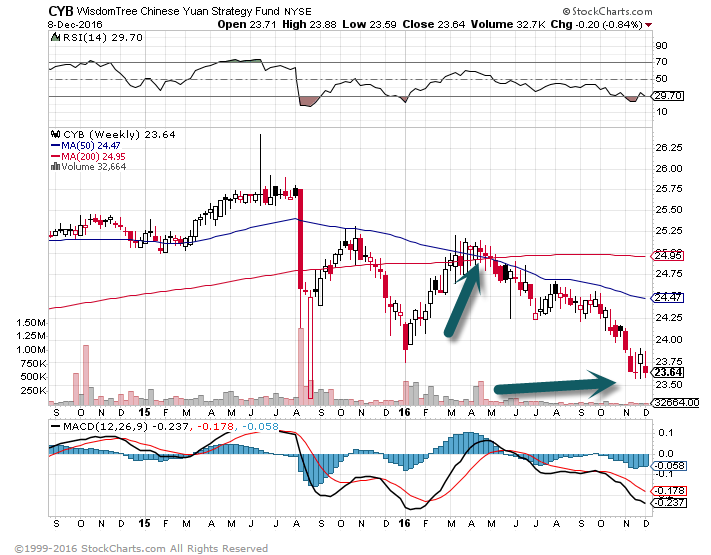 4.Inflation??  Chinese PPI Up for the First Time in 54 Months.

It marked the fastest year-on-year increase since October 2011, and was miles above market forecasts for an increase of 2.2%.

The rebound in producer price inflation has been spectacular over recent months, a stark contrast to what had been seen in previous years when prices in annualised terms had fallen for 54 consecutive months.

The acceleration in inflationary pressures fits with a string of strong economic data reports released in China over recent months.

Manufacturing and services PMI reports — which measure changes in activity levels from one month to the next — both hit multi-year highs in November, indicating that operating conditions in both sectors are starting to improve.

Chinese trade data also topped expectations in November with the value of imports and exports both rising from the levels of a year earlier. 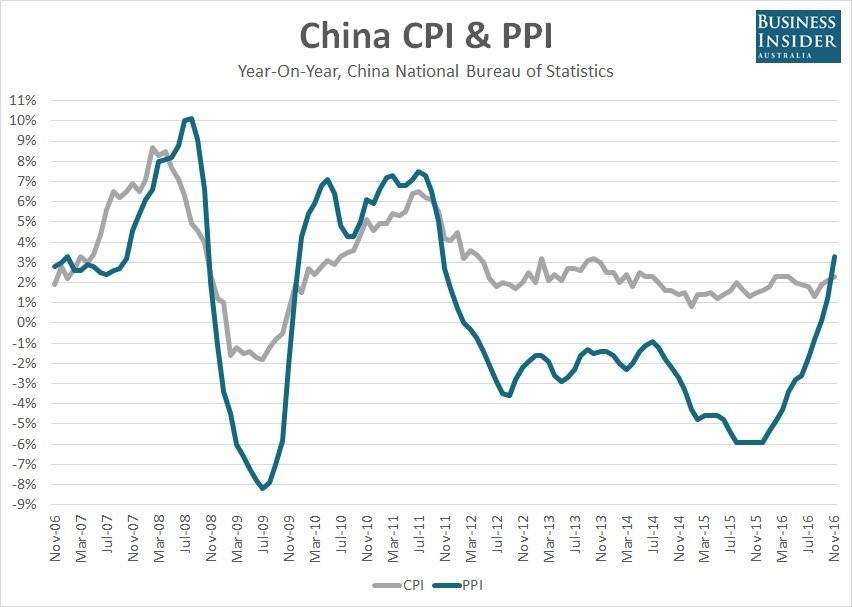 The yield spread is a key metric that bond investors use when gauging the level of expense for a bond or group of bonds. For example, if one bond is yielding 7% and another is yielding 4%, the spread is three percentage points, or basis points (BP). Non-Treasury bonds are generally evaluated based on the difference between their yield and the yield on a Treasury bond of comparable maturity. 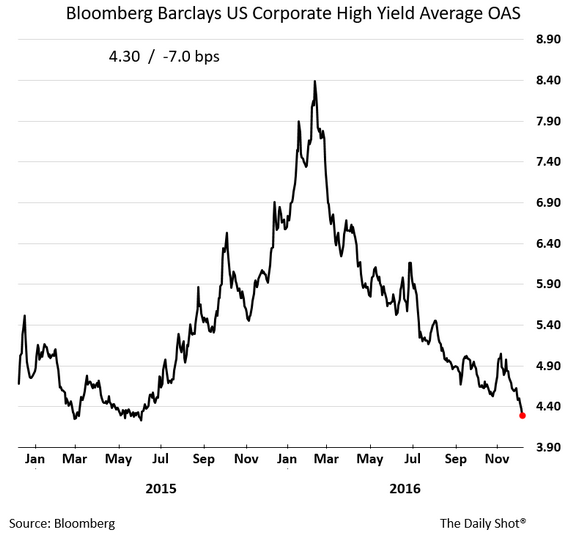 Each month, Bespoke runs a survey of 1,500 US consumers balanced to census.  In the survey, we cover everything you can think of regarding the economy, personal finances, and consumer spending habits.  We’ve now been running the monthly survey for more than two years, so we have historical trend data that is extremely valuable, and it only gets more valuable as time passes.  All of this data gets packaged into our monthly Bespoke Consumer Pulse Report, which is included as part of our Pulse subscription package that is available for either $39/month or $365/year.  We highly recommend trying out the service, as it includes access to model portfolios and additional consumer reports as well.  If you’re not yet a Pulse member, click here to start a 30-day free trial now!

Below we highlight the results of questions we ask regarding current views of the stock market, which is just one of literally hundreds of data points included in each monthly report.  The first chart shows this month’s reading with each response broken out for the subset of respondents who report themselves as investors and their view of the stock market.  While roughly 45% of respondents have a neutral view of the market, about 38% have a positive view and only about 15% have a negative view.  It is worth noting the breakdown of these responses because although this month’s reading is the strongest we’ve seen in our survey’s history, it is still only slightly above neutral.

The second chart shows our highest ever unrounded tracker reading (3.274) with only two readings from spring of 2015 matching this number on a rounded basis.  Previously, those high ratings for stock market optimism occurred right near an intermediate term peak in the market that stood for over a year.  Based on our survey’s history and the recent price action since the US elections, we think it’s fair to describe this enthusiasm for equities as a contrarian signal that things might be getting carried away.  Whether it’s the election of a Republican, simply price action, positioning or seasonality, the current run higher in equities seems slightly excessive and the enthusiasm shown by our respondents seems to confirm that suspicion.  However, again it is worth taking into account that although this is the strongest reading we have seen to date, it still comes in only slightly above 3, which is a neutral rating. 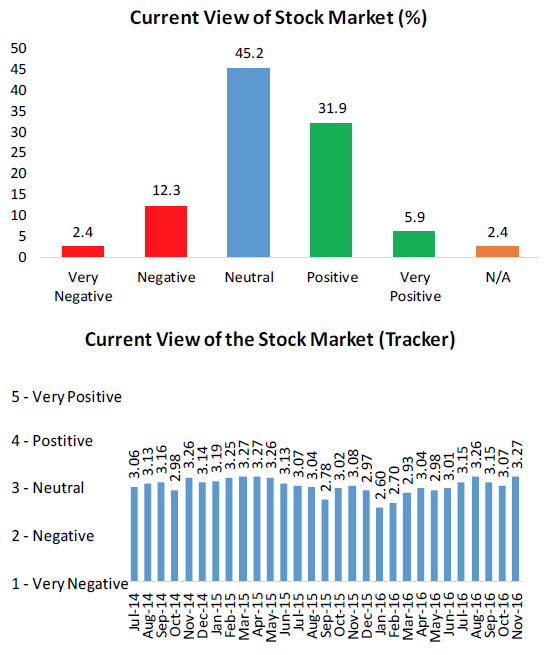 7.Goldman Is UP 33% Since Trump Election…..Goldman is Agnostic to Parties—They Played Huge Role in Obama White House.

Goldman is Responsible for 1/3 of the Dow Jones Return YTD. 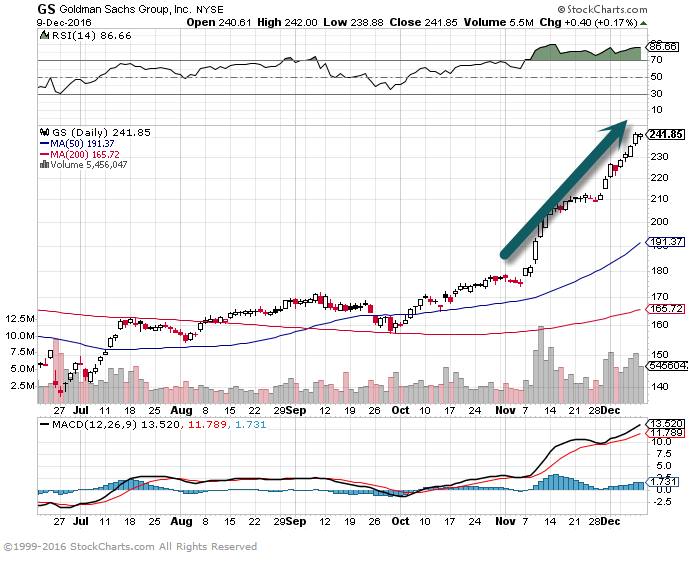 Under the Obama Administration, in 2009 alone, Goldman Sachs took more than $20 billion in taxpayer cash through bailouts, payments and backstops; and then turned around and paid out $16.2 B as 2009 bonuses, plus an additional $5 B more in bonuses in 2010 [Without Obama Administration’s “help” Goldman’s bonuses would have been zip, zero, ziltch.]

Did you know corporations, like Goldman Sachs, can  “help elect” a majority of Congress by donating a mere $1.6 B in  “campaign donations”? That’s less than 10% of the $20 B “bailout” Goldman Sachs received. Easily affordable, with a 10x return on investment.

Goldman Sachs is lovin’ it.

Discuss this article in the Lets Roll Forums:

By: fflambeau Saturday May 8, 2010 9:13 pm I. Introduction. This essay shows the pervasive influence of Goldman Sachs and its units (like the Goldman-Robert Rubin-funded Hamilton Project embedded in the Brookings Institution) in the Obama government. These names are in addition to those compiled on an older such list and published here at FDL. In the future, I will combine the names here and those on the earlier article but I urge readers to look at the earlier list too (links below). Combined, this is the largest and most comprehensive list of such ties yet published. 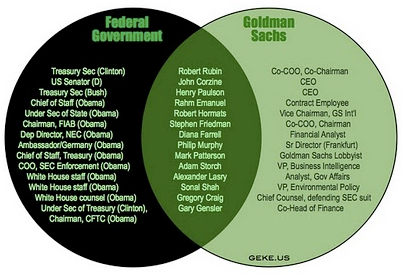 8.Natural Gas 33% Move Up Since Election. 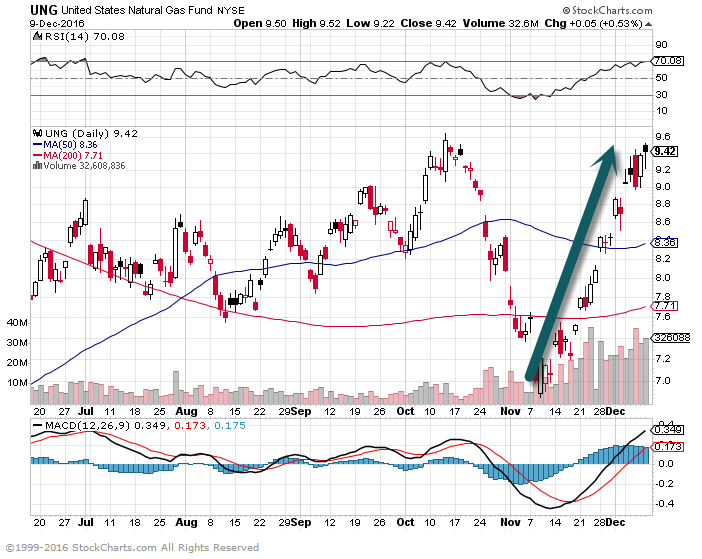 Seriously, though,  For What It’s Worth,  “There’s something happening here” in Natural Gas.

In this scenario of abundant resources, U.S. companies have been planning on building pipelines and LNG export terminals to ship domestically-produced natural gas to Mexico, Canada and to future LNG export hubs along the coast. These exports hubs will be used for further LNG shipments to markets in South America, Asia, Europe, and the Middle East. – Fiscal Times

Take a look at the price differentials in Nattie across the globe (dated, for sure, but we believe relative prices haven’t changed that much). 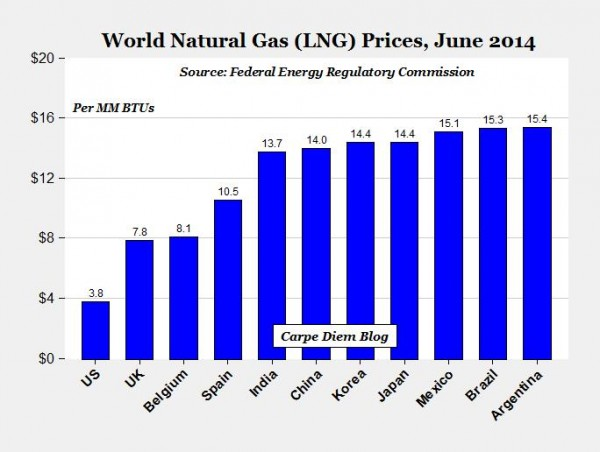 The $12 dollar differential in prices between Japan natural gas and the U.S.  will lead to an export boom in order to arbitrage these price differentials.   It is difficult and expensive,  for sure, but the price differential will continue to act as a compelling incentive to export.  It should be made easier under a Trump Administration.  The world price will eventually converge, with a premium for the cost of exporting,  sooner,  probably than later.

The graph is based on the economic policy uncertainty index developed by three U.S. professors — Scott Baker, Nick Bloom and Steven Davis.

See Complacency in the indicator going into 2000 and 2008 market corrections….It has been making new highs during this 4th longest bull market ever. 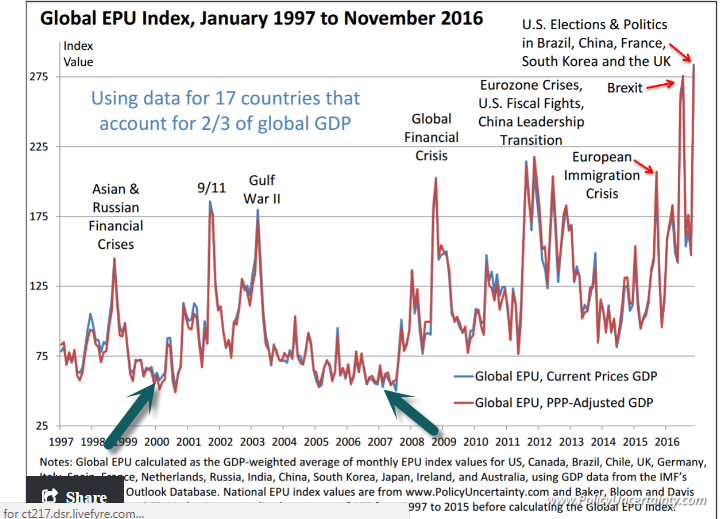 After interviewing over 100 successful people, Tim Ferriss says a passage from a 1922 novel captures the approach every high performer takes

Since starting his podcast in 2014, bestselling author Tim Ferriss has interviewed well over 100 highly successful people, from Navy SEALs to billionaire entrepreneurs.

He uses his interviews to pick apart the, as he puts it, “tactics, routines, and habits,” that have brought these subjects to the tops of their fields. He’s collected his favorite lessons from these discussions, along with a few new ones, in his book “Tools of Titans.”

Ferriss recently stopped by Business Insider’s New York office for a Facebook Live Q&A, and explained that there is a passage in Herman Hesse’s 1922 novel “Siddhartha” that offers a suitable lens for all of the “tools” he shares in his book.

The novel “Siddhartha” tells the story of a young monk’s quest for enlightenment (the Buddha narrative). Four of Ferriss’ guests included in “Tools of Titans” said it was the book they most often gave as a gift to others, including renowned Silicon Valley investor Naval Ravikant.

Ravikant was the person to highlight for Ferriss the passage in which the protagonist is asked by a merchant how he can offer anything to the world if he has discarded all of his possessions. Siddhartha tells the merchant that, “Everyone gives what he has,” and the merchant replies, “Very well, and what can you give? What have you learned that you can give?”

“I can think, I can wait, I can fast,” Siddhartha says.

Ferriss said that this deceptively simple response is the foundation for all high performers. He explains in “Tools of Titans”:

“I can think: Having good rules for decision-making, and having good questions you can ask yourself and others.

“I can wait: Being able to plan long-term, play the long game, and not mis-allocate your resources.

“I can fast: Being able to withstand difficulties and disaster. Training yourself to be uncommonly resilient and have a high pain tolerance.”