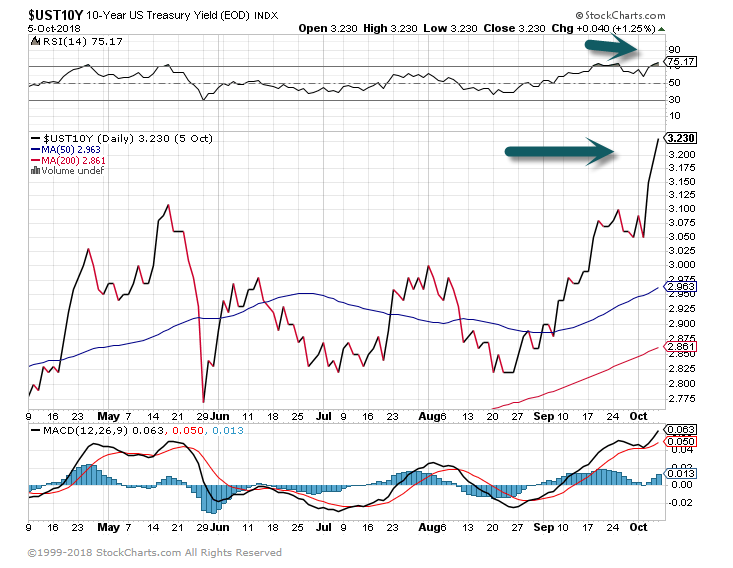 3 Month Libor Double in One Year. 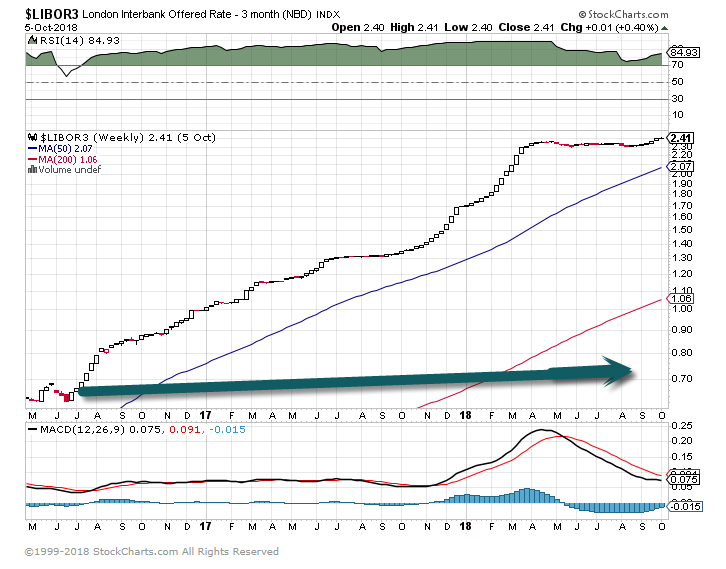 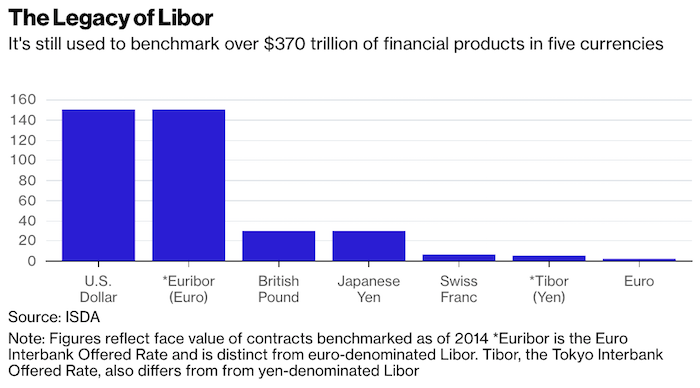 Tencent Sheds $200B in Market Cap this Year. 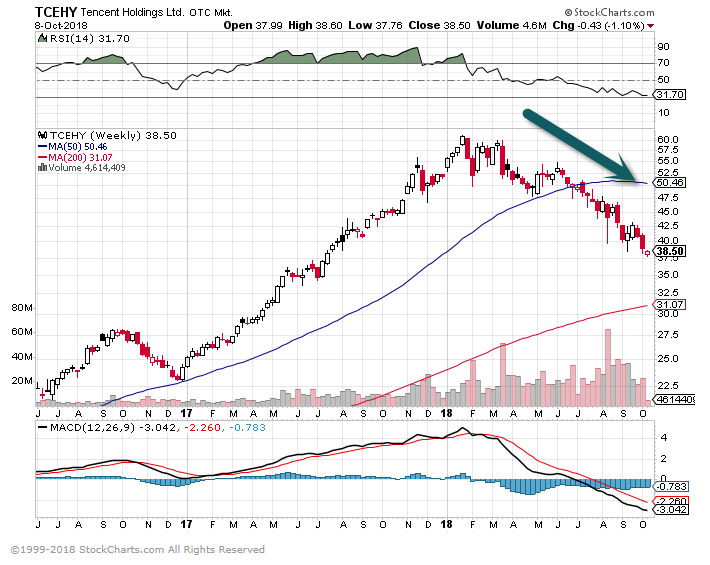 4.Emerging Markets Fall Back into Box Going Back to 2010 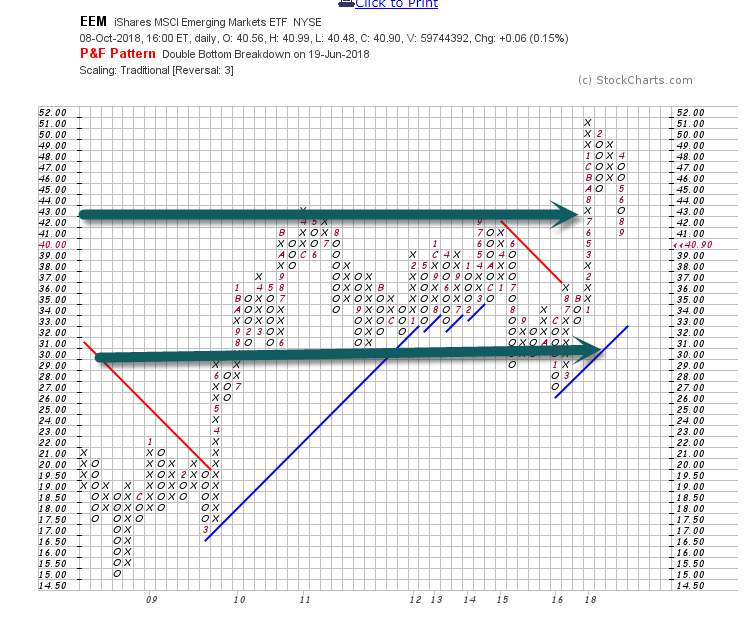 US Equities ended the week 1.5% below their all-time high close. That’s by far the lowest drawdown of any country ETF (average is -25%). 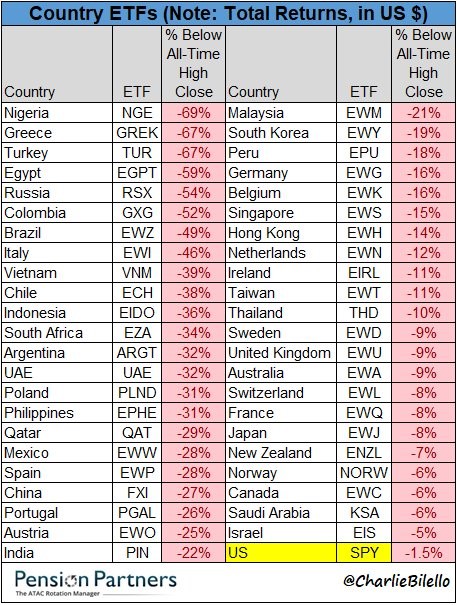 The spread in 2018 YTD country equity returns is stunning. (via @charliebilello)
(twitter.com)
https://twitter.com/charliebilello
Found at www.abnormalreturns.com

No time for heroics: ETF investors look for cover

Written by
Martin SmallHead of U.S. iShares at BlackRockThe economy and corporate earnings are humming. Inflation is in check. U.S. stocks are touching records. So why are investors so edgy? ETF flows can help tell the story.

In the early 1920s, football coach Elmer Henderson set the USC Trojans on the path to prominence, ultimately earning the best winning percentage of any coach in Trojan history. Henderson was known as “Gloomy Gus,” a nickname he earned for his tendency to bad-mouth his own team’s chances before a game. It’s unclear whether he was hedging his bets or really worried, but imagining–and preparing for–the worst clearly served him well.

The markets may be going through a Gloomy Gus moment right now. To all appearances, the economy is in great shape. Corporate profits are up, GDP growth is steady, inflation and unemployment are low and banks are lending. The same rising tide that propelled all global financial assets in 2017 are still in place.

Yet, if we track where exchange traded fund (ETF) owners have focused their dollars this year, there’s clearly been a sentiment shift. While investors are staying in the markets, they’re also more reticent and adding ballast to their portfolios. 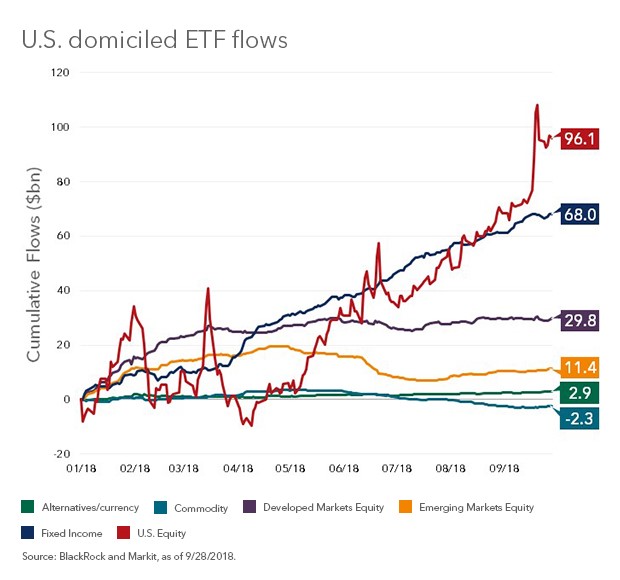 U.S. ETF investors have added more than $205 billion in net new assets this year (through September 28), most of it in large-cap U.S. stocks and Treasury bonds. (Treasury purchases have largely been “barbelled,” allocated to short- and long-term maturities.) Emerging market stock ETFs, which had gathered $42 billion in 2017, have taken in about $11 billion; the bulk of flows have gone to broad indexes and to China. In fixed income, high yield saw more than $4 billion in outflows, compared with $4 billion added during the previous year.

In other words, investors are in no mood for heroics. They’re leaving their Superman capes in their briefcases and hunkering down at their desks. 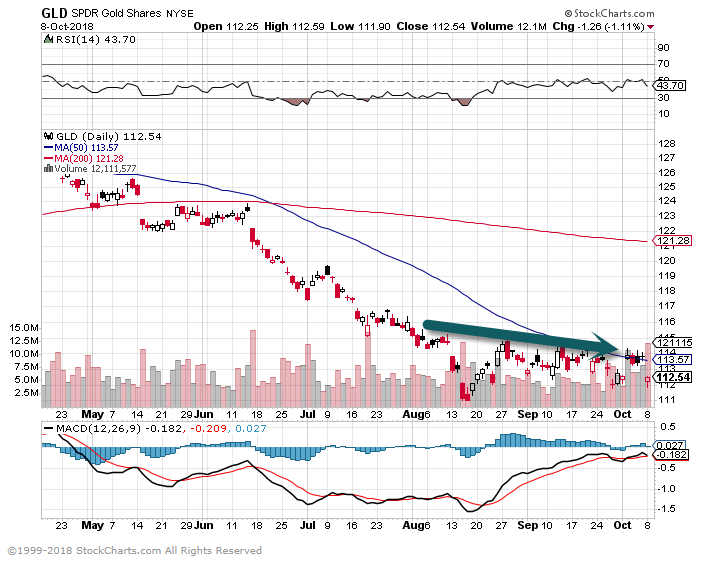 8.More Money Flowing to Private Deals/Venture…Cisco Gets in Game

Cisco is cozying up to the start-up world as part of a plan to revive growth. As part of this plan, it’s the principal investor in a $500 million venture fund that will be run by Jon Sakoda, a former partner at venture firm NEA.

According to an SEC filing on Friday, Sakoda is the managing director of Catalyst Labs Fund I and is looking to raise $500 million.

It’s the first we’ve heard from Sakoda since May 14, when he wrote a blog post announcing that he was leaving NEA after 12 years to “build an entrepreneurial investing platform that is differentiated from what exists today.”

The day after his post, the Wall Street Journal reported, citing people familiar with the matter, that Sakoda would be running an independent early-stage fund started by Cisco, which would commit hundreds of millions of dollars. Cisco, as the Journal reported, has an existing team with over 40 people and has invested more than $2 billion from its balance sheet into start-ups.

Catalyst is the name of the management company. The name of the fund will be revealed in the next few months when it’s ready for launch, and it will be operating in stealth mode until then, according to a person familiar with the matter, who asked not to be named because the details are still confidential.

With tech companies like Alphabet, Intel and SAP pouring money into in-house venture groups, corporate venture investing has reached record levels, according to Crunchbase. Law firm DLA Pipersaid in March that corporations are currently providing about 30 percent of start-up capital.

However, Catalyst is structuring itself differently from a typical corporate venture fund, which explains why it’s filing with the SEC to raise outside money.

9.Read of the Day…New Age Parenting-You Spend More on Them as Adults. 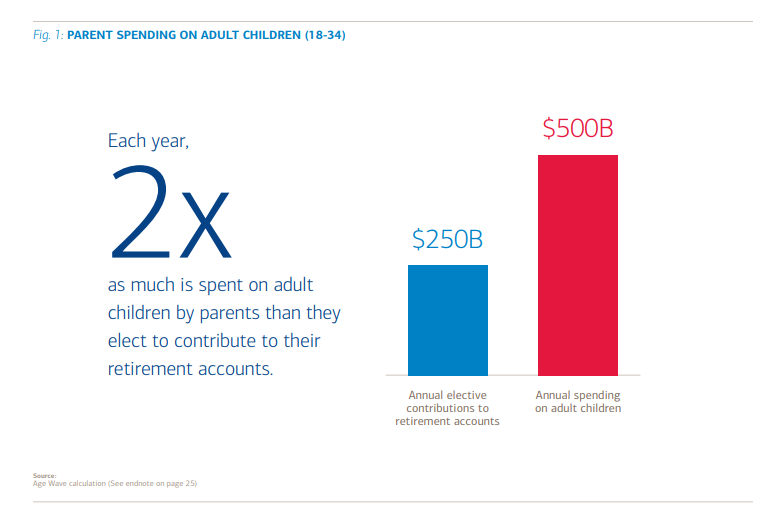 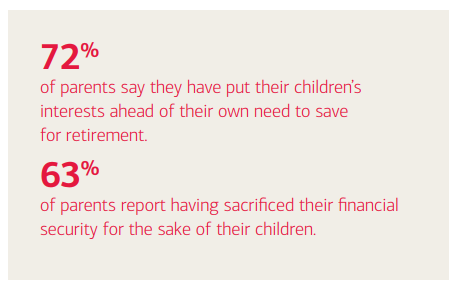 10.Should Leaders Aspire To Warmth Or Competence?

Over the years a great deal of research has been done on two traits people often use to evaluate others.  Research done on these two traits can be traced back to the 1940’s and has continued from then to the present. One trait is labeled Warmth—the extent to which a person is friendly, exhibits positive intentions toward others, and is trusted, kind, and empathetic. The other trait is Competence—an individual’s intelligence, their ability to achieve, their efficiency, their individual skills, and overall power.

Using Zenger Folkman’s data gathered for over a decade on the 49 key behaviors that differentiate poor from excellent leaders, my colleague Joe Folkman and I sought to determine if these 49 behaviors effectively measure those two traits.

Our data for this analysis comes from 360-degree assessments that, on average, include feedback from 13 raters on the given leader. These raters include managers, peers, direct reports, and others with whom the person has had extensive contact. We utilized a global database of over 70,000 leaders and performed a factor analysis that forced the data into two factors. We then selected the top 20 items from each factor and discovered that these items clustered nicely into the Warmth and Competence dimensions.

Items that factored into Warmth were:

Competence Items that factored into Competence were:

Which Trait is Most Prevalent?

We created indexes on both traits and calculated percentile score based on our total norms. We then analyzed which trait was most dominant for each individual. To be dominant we required a difference score of at least 5 percentile points. We found that the two qualities were quite evenly split. Our data showed that 53.5% of leaders were dominant in Competence and 46.5% were dominant in Warmth. We then examined differences between men and women. Stereotypes of women characterize them as demonstrating more Warmth; however, the data presents a different conclusion. Note in the graph below that based on feedback from others, 59.3% of women were more dominant in competence compared to 53.8% of men.

We next wondered if leaders in top management would be perceived as more dominant in Competence or Warmth, and how those in top management would compare to supervisors. Based on casual conversations we’ve found that most people assume that top leaders would be more oriented toward Competence than Warmth. However, the data shows a different trend. Looking at leaders by position in their organization, we found that 61.2% of top level managers were dominant in Warmth. We conclude that more top-level leaders have learned that relationships are critical.  Consider how negative interactions between Travis Kalanick, the former CEO of Uber, became the start of his downfall. Note also that 67.0% of supervisors were more dominant in Competence.  We conclude that to be selected and function well as a supervisor places greater emphasis on being perceived as competent than on being warm. Then, as the individual moves upward, it becomes increasingly more important to be perceived as exhibiting Warmth in addition to being Competent.

Self-assessment data tracks very closely with the rating from others in terms of leaders being more dominant in their abilities on Competence than Warmth. What has become clear in our research is that both traits are very important for a leader to possess.

Jack Zenger is the CEO of Zenger/Folkman, a strengths-based leadership development firm. He is the author and co-author of 13 books including including How To Be Exceptional: Drive Leadership Success by Magnifying Your Strengths, The Extraordinary Leader, Turning Good Manage…