$350 Trillion of Financial Products are Linked to Libor. 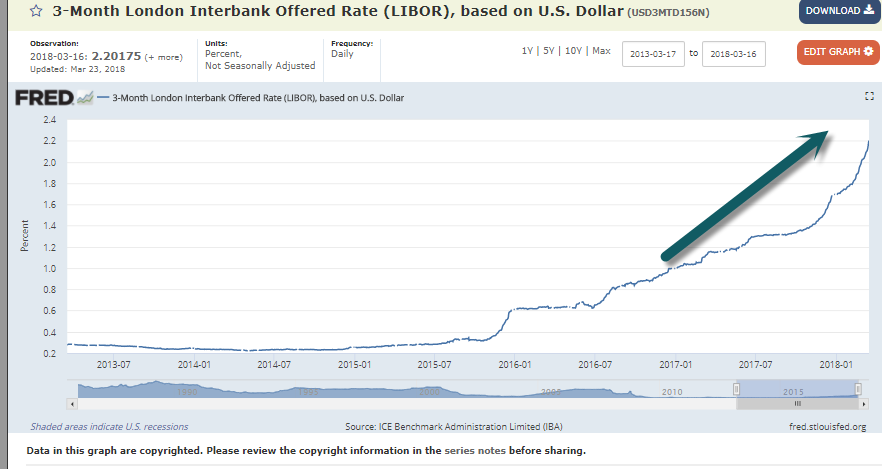 2.$500 Billion Could Flow into Euro in the Next 2 Years…Dollar Continues to Weaken.

Nordvig estimates a half-trillion dollars could flow into the euro in the next two years, equal to a 25 percent boost in the currency’s share of reserves.

Developing countries and oil-exporting nations in the Middle East, which rely heavily on international trade, are the most likely to lift their euro allocations, he said. Six emerging economies — China, Saudi Arabia, Taiwan, India, South Korea and Brazil — hold almost half the world’s reserves, data compiled by Bloomberg show. China alone has amassed over $3 trillion in foreign exchange — primarily as a result of its cheap exports to the U.S.

Currently, about 64 percent of the global reserves are denominated in dollars. The euro, the only other primary reserve currency, has remained a distant second, accounting for 20 percent of official allocated reserves, or $1.93 trillion. (The remainder comprises a mix of other national currencies like the British pound, Japanese yen and Canadian dollar.)

Nordvig argues it won’t take much to move the needle. Central banks were so down on the euro that many eliminated the currency from their reserves altogether. In 2016, Brazil — the 10th-largest holder of reserves — held no euros. Saudi Arabia, the fourth-largest, had slightly more than 10 percent of its portfolio in euros, far less than the average.

“We think a pick-up in reserve demand is right around the corner,” said Zach Pandl, Goldman’s co-head of global FX strategy, who predicts central banks may funnel $300 billion into the euro over the next one to three years. “A lot of the preconditions that needed to be met are starting to come into view.” 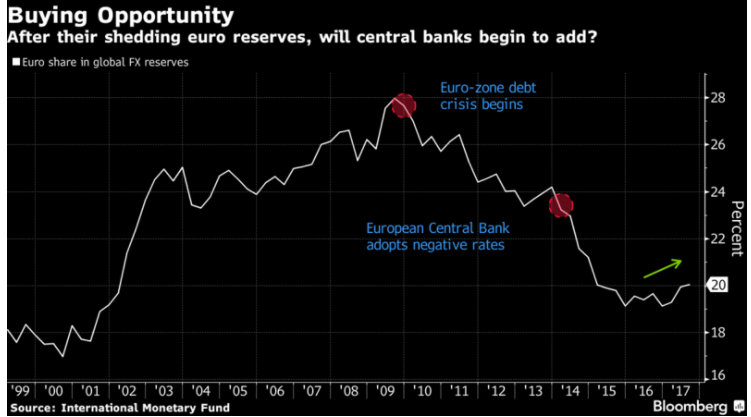 During pullback momentum has outperformed the defensive consumer staples sector, but in last 5 days of volatility, MTUM underperformed.

YTD Momentum Sectors Crushing Staples so change in last 5 days something to watch.

Chart I am watching closely…Transports run up to 50day and fail 2x.

Equity Markets: The consensus forward P/E ratio for the S&P 500 dipped below 17x again. When will the analysts begin revising their forecasts down in response to the trade-policy headwinds? 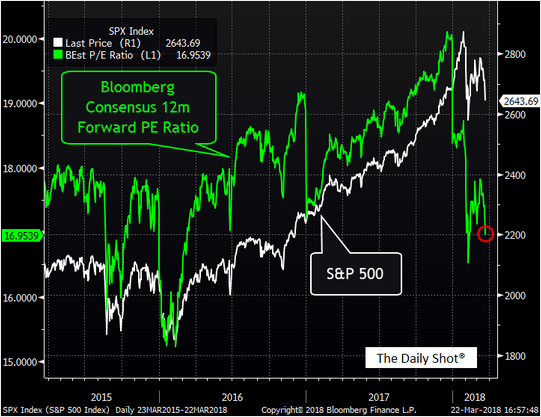 The short answer is that the Fund stayed true to its name—it avoided the state-owned enterprises (SOEs)in the emerging world. WisdomTree defines a SOE as a company where governments control at least 20% of the outstanding shares. In October, that represented some 300 emerging market companies with a combined market value of approximately $2 trillion. Much of that value is concentrated in the Chinese banking and Russian energy sectors, although SOEs can be found in most developing nations. WisdomTree estimates that about 25% to 35% of the market capitalization of broad emerging market indexes are typically made up of state-owned entities.

XSOE allows investors to gain broad exposure to emerging markets without assuming the risk of owning state-owned enterprises. Last year, that simple strategy returned 46.5% at NAV, outperforming the MSCI Emerging Markets Index by 912 bps in 2017, and by 220 bps annualized over the prior three years. We believe this innovative WisdomTree ETF sets a new standard for measuring the returns of “private sector beta” across emerging market equities. 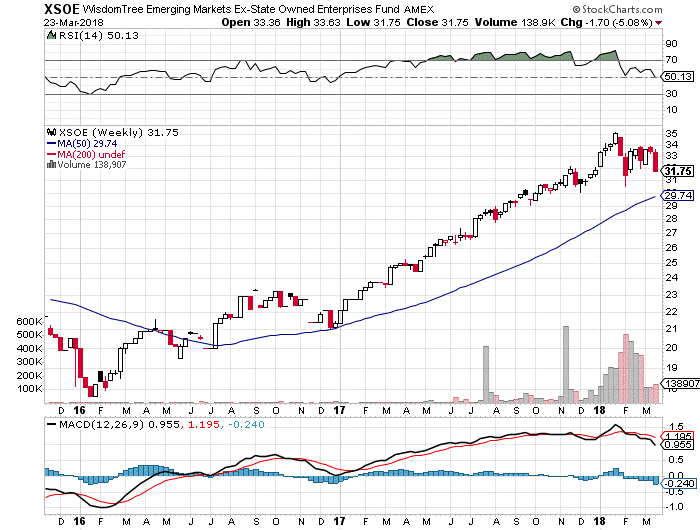 What more efficient way to take the U.S stock market down than to hit its largest stock by threatening market access to the Chinese consumer?   Apple’s market cap is over $800 billion, the world’s largest, and such a scenario would certainly take the overall market down.

The following chart illustrates Apple derives around $50 billion of its annual revenues from greater China, which is about 20-25 percent of its total revenues. 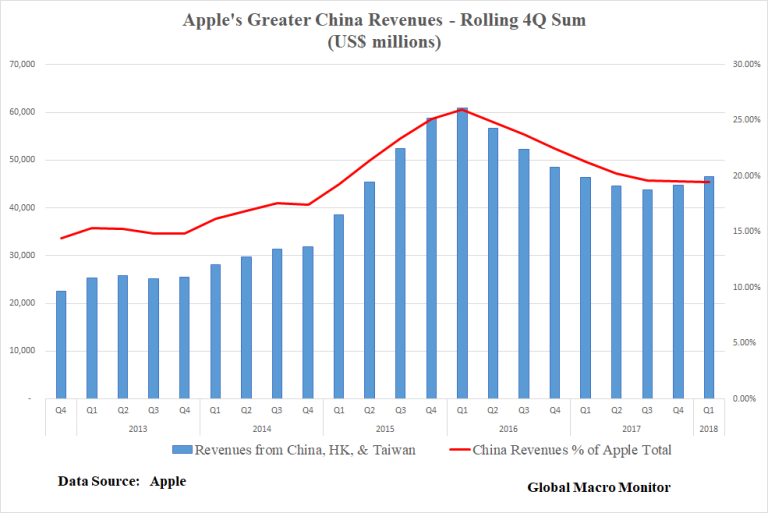 8.Read of the Day….Hedge-fund managers that do the most research will post the best returns, study suggests

For investors, it appears doing your homework does trump dumb luck.

Hedge funds that frequently accessed SEC filings such as annual reports posted better-than-average returns in the following month compared with non-users, according to a new academic study.

The working paper from Rice University finds that funds accessing one or more SEC filings in a month exhibit 1.5 percent higher annualized abnormal returns in the subsequent month and that above-median users generate 2 percent higher returns per year.

By mapping hedge fund internet protocol (IP) addresses to those accessing financial filings at the SEC, the team identified public information acquisition by hedge funds such as Renaissance Technologies, PanAgora and AQR. Perhaps most surprising, the researchers found the median fund-month download amount is only four filings while the mean was 672, suggesting that relatively few funds are accessing vastly more information.

We don’t like to lose things that we own. We tend to become extremely attracted to objects in our possession, and feel anxious to give them up. Ironically, the more we have, the more vulnerable we are. Having accumulated wealth implies that we have more to lose than to gain. However, emotion regulation, such as taking a different perspective, can reduce loss aversion and help people overcome potentially disadvantageous decision biases.

Why are we so afraid of losing? Our aversion to loss is a strong emotion. The aversive response reflects the critical role of negative emotions (anxietyand fear) to losses (Rick, 2011). In other words, loss aversion is an expression of fear. This explains why we tend to focus on the negative events (a setback) than the positive ones (making progress). Negative emotions (receiving criticism) have a stronger impact than good ones (receiving praise). As Charles Darwin once said, “Everyone feels blame more acutely than praise.”

We are more upset about losing $10 than we are happy finding $10. Roughly speaking, losses hurt about twice as much as gains make you feel good (Khaneman, 2011). This is why in marital interactions it generally takes at least five kind comments to offset for one critical comment (Baumeister et al, 2001).

The idea of loss aversion is shown in consumer behavior. Consumers are more responsive to price increase than to decrease.   For example, from July 1981 to July 1983, a 10 percent increase in the price of eggs led to a 7.8 percent decrease in demand, whereas a 10 percent decrease in the price led to a 3.3 percent increase in demand (Putler, 1992). In another study, consumers were asked to either build up a basic pizza by adding ingredients (e.g., sausage and pepperoni), or scale down from a fully loaded pizza by removing ingredients. Consistent with loss aversion, consumers in the subtractive condition ended up with pizzas that had significantly more ingredients than those in the additive condition (Levin et al., 2002).

The principle of loss aversion also applies to the emotional pain of scaling back. While we indulge in buying things (larger home, new car) and think that we can always downsize if we could not afford. But in reality downgrading to a smaller home is psychologically painful. Being wealthy doesn’t help. For rich people, the pain of losing his or her fortune exceeds the emotional gain of getting additional wealth, so the rich becomes vulnerable and anxious.

Ownership is not limited to material things, it also applies to ideas. Once we take ownership of an ideology (about politics or sport) we tend to value it more than it is worth. And we hate to lose an argument. However, we run the risk of dismissing others’ idea that might simply be better than ours. As a teacher (and a parent), I have learned that a good strategy to help students adopt a new idea would be to provide opportunities for them to come up with the ideas on their own. People generally have positive attitudes toward themselves, and they enhance the value of their choices and devalue the road not taken. They also feel invested in their opinions. They have skin in the game (Taleb, 2018).

Even our views of mate value change the more time we spend together. The longer we spend with our mates, the harder will be to simply let go, regardless of how unhappy we are.

In a nutshell, the loss aversion is an important aspect of everyday economic life. The idea suggests that people have a tendency to stick with what they have unless there is a good reason to switch. The loss aversion is a reflection of a general bias in human psychology (status quo bias) that make people resistant to change.  So when we think about change we focus more on what we might lose rather than on what we might get.

What is the cure? Being aware of it might help (forewarned is forearmed). For example, suppose you are de-cluttering your home. Using this knowledge, you can view each item as if you were non-owner (not yet owned it) and apply a simple test: If you didn’t have the item, how much would you be willing to pay to buy it? Just by changing your perspective, you can gain clarity to make you less vulnerable.

We can also take a broader perspective. Stoic philosophy teaches that if you have lost someone or something precious, you can try to value her/him or it differently by imagining that you never knew that person, or never owned that object (Bakewell, 2011). If you feel tired of everything you possess, pretend that you have lost all these things and are missing them desperately. Doing so will make us value what we already have, and possibly prevent “the grass is always greener” syndrome.